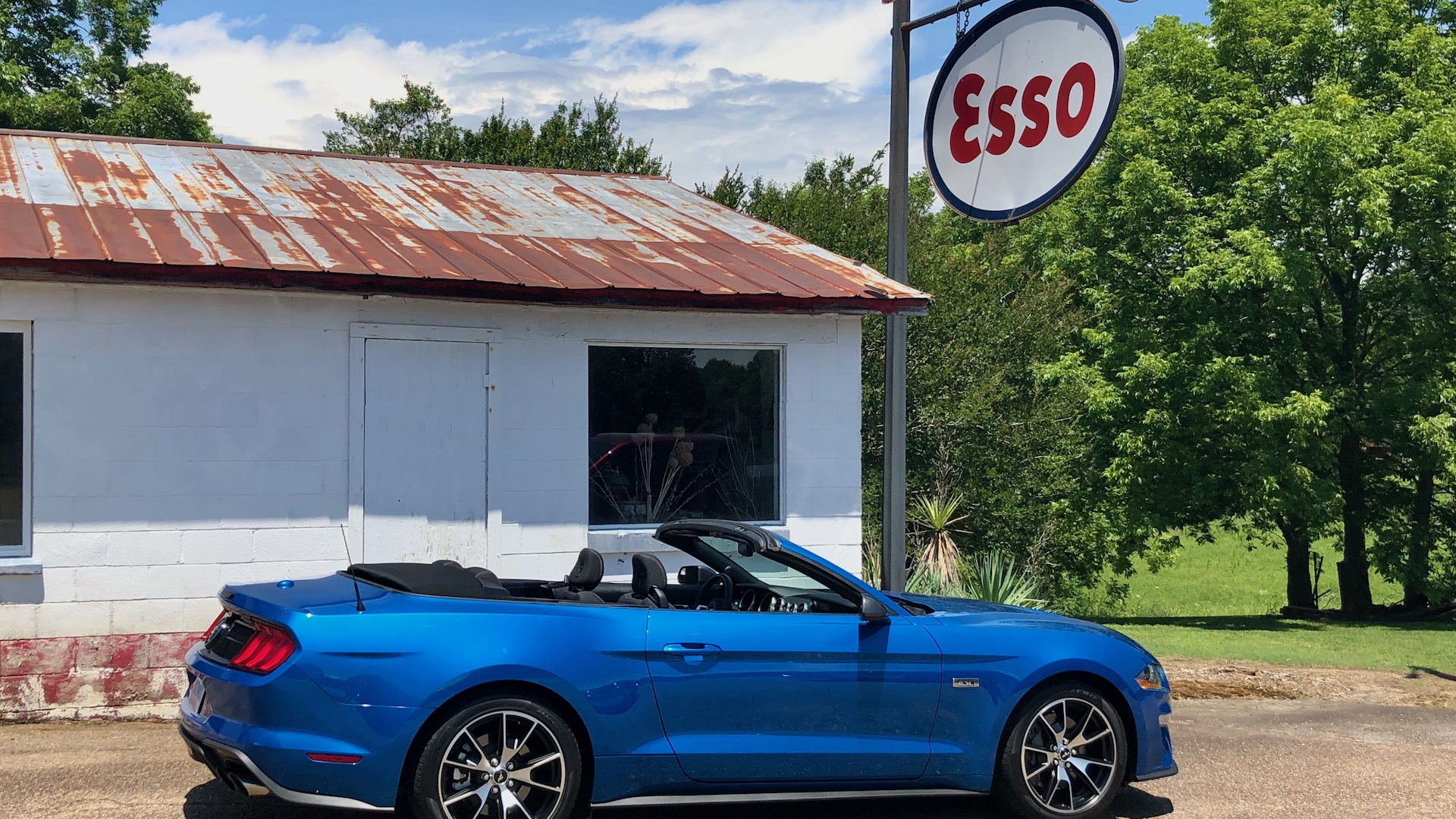 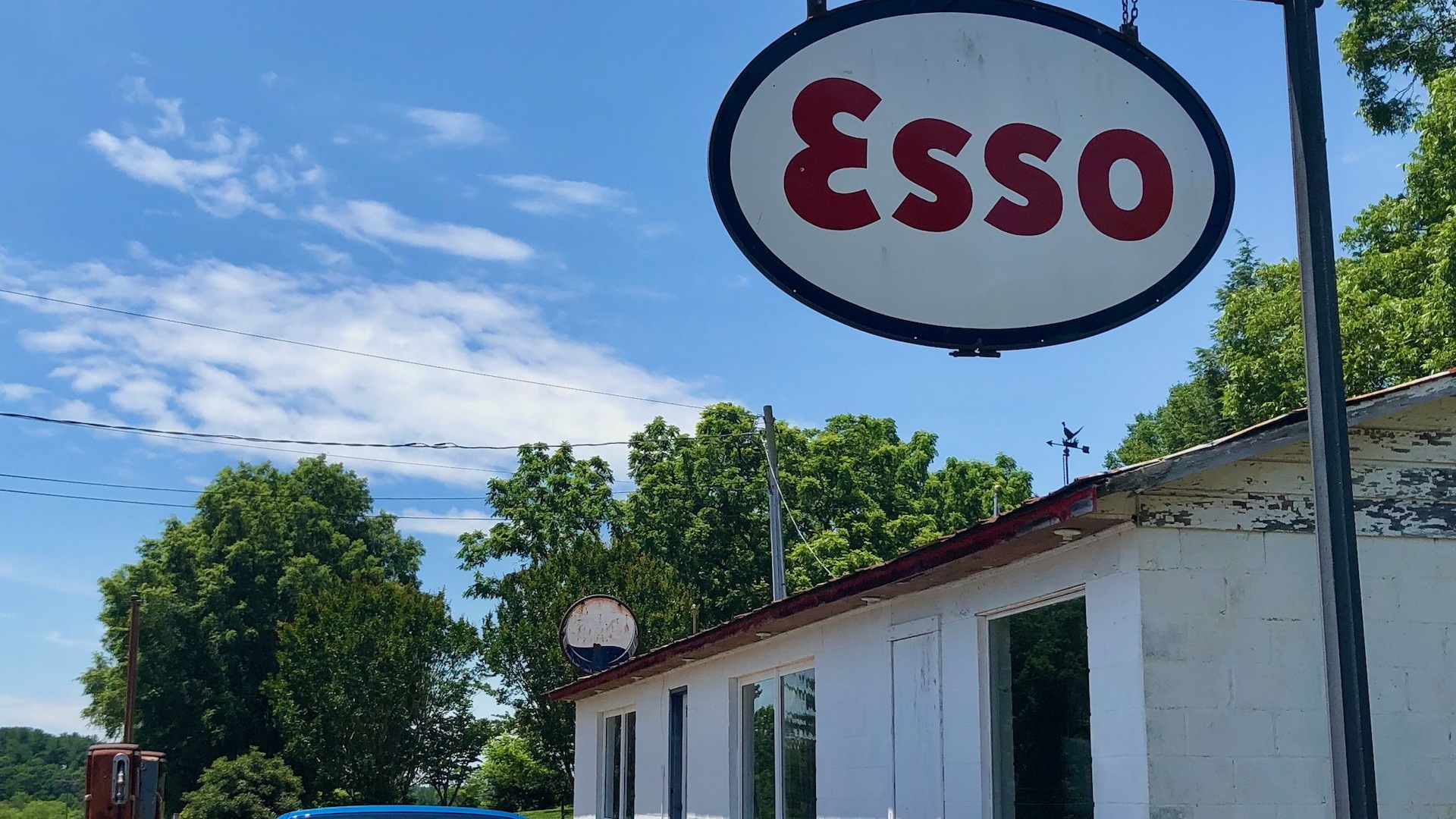 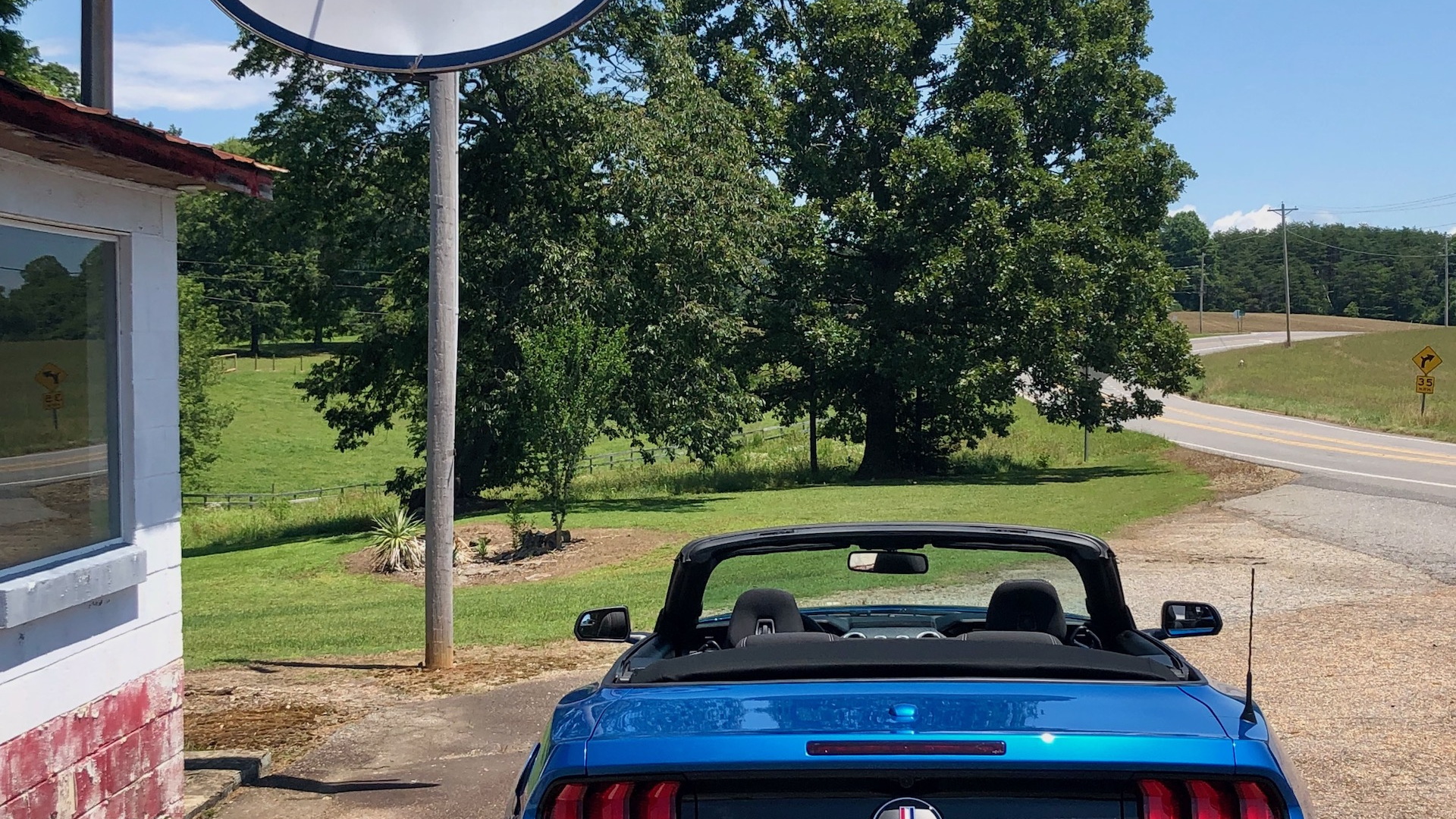 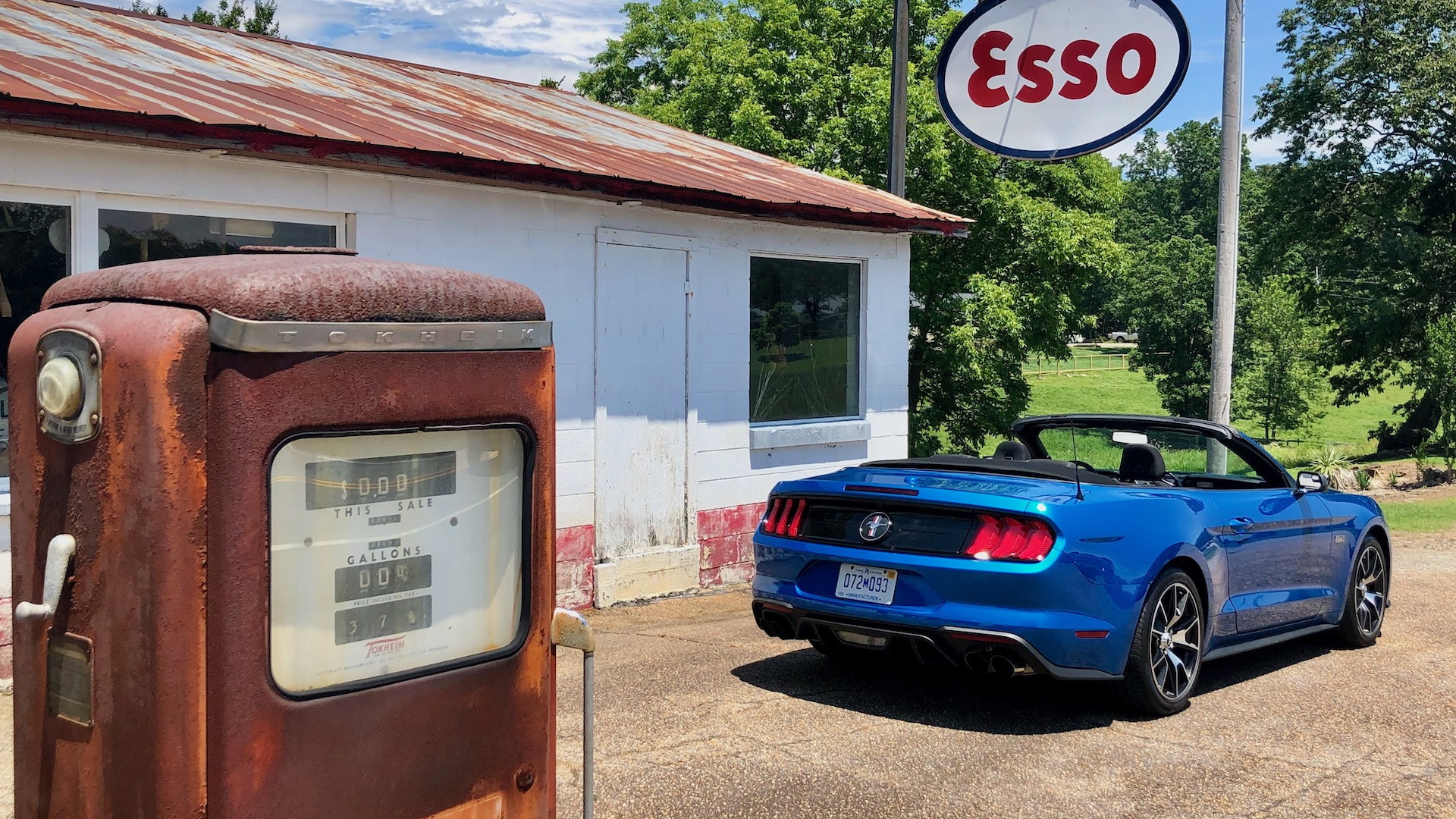 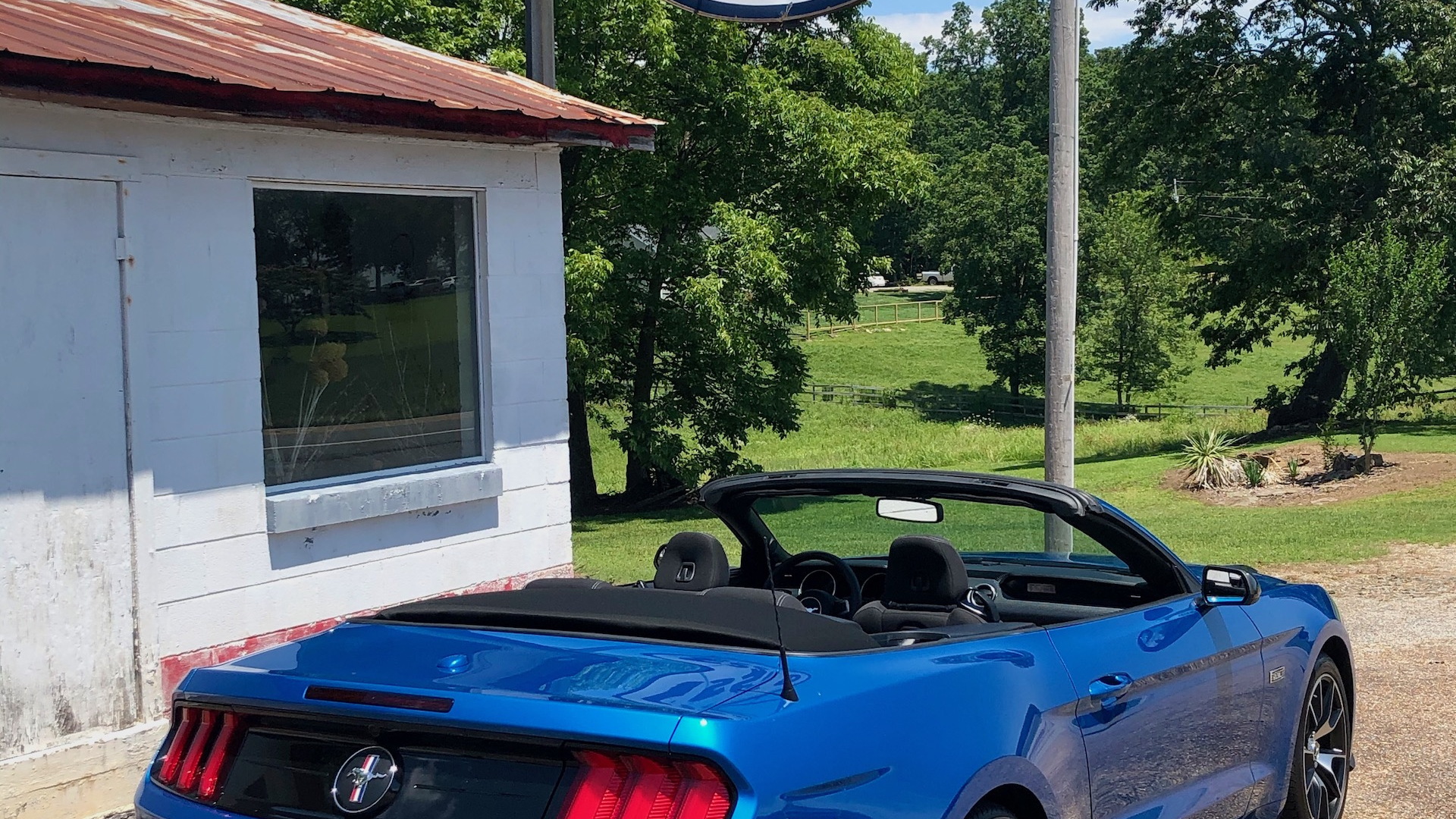 When I was 16 years old, no car lit up the tires in my mind like a Ford Mustang SVO. It was so "other"—not a GT, not a 5.0 LX. It was something with whiny noises and double louvers and hand-squeezed lumbar seats—part Reebok Pump, part Merkur XR4Ti, with a little RX-7 thrown in for good measure. I almost bought a crimson-red one, with gray cloth seats, stick shift, and low miles, until a Ford dealer convinced themselves they'd get two grand more than I had.

I'm glad I never got that car, because an Audi Coupe GT came my way instead, but I've forever thought a turbo-4 Mustang was a perfectly fine way to translate the pony-car image into something that didn't thump a V-8 soundtrack. It was other enough for me.

In some ways the Mustang I drove earlier this month is the worst-spec Mustang I can imagine. Turbo-4, yes, but in a convertible body style that loosens lots of things in not-ideal ways. It's a convertible—and a manual, which makes it almost unsellable on the secondhand market and unusable in the traffic that's become a second life in the unaccustomed South.

Finally, it's saddled (in this sense equipped, not hindered) with the higher-output turbo-4 and a raft of handling hardware—a strut-tower brace, heavy-duty front springs, larger brakes, a larger rear sway bar—so it sets high expectations and has to find a way to at least pull into the rearview mirror of the GT, GT350, and GT500. (Mach-E? One quandary at a time, please.)

That '80s dream machine filtered through my brain while I drove, while recent drives in the Shelby GT350 and GT500 rang in the background as if they were on call waiting. Could this droptop ersatz SVO give me something new to fixate on? Is it still other enough? Here's where it landed a hit—and where it missed.

Hit: Brawn on a budget. At 22 mpg on the EPA combined cycle, this is the least efficient turbo-4 Mustang you can buy, but the high-performance version puts 330 horsepower and 350 pound-feet of torque at your disposal—in this case, through a well-staged 6-speed manual transmission and a Torsen diff at the rear wheels. Instinct puts it at a five-second run to 60 mph.

Miss: Engine noise. You want to hear something evocative in a Mustang, and this isn't it. The SVO never sounded great; this turbo-4's a bit like a Miata going off from behind a box fan. It's not bad at low engine speeds, but the higher-frequency, less pleasing sounds of a turbocharger wastegate and inline-4 vibrations overwhelm it above 3,000 rpm.

Hit: Heavy steering feel. The Mustang's drive modes have a companion toggle switch for steering heft, and though it's all dialed in by algorithm, the Mustang's sport steering mode strikes a nice natural balance with the high-performance hardware on board.

Miss: Shift sticks. Has any Mustang ever had really great clutch take-up? Not this one either. There's a dip in torque as you unpedal and it makes driving in traffic a real nuisance. The movement between gears itself is notchy, not snicky like the Miata touchstone I'm used to driving. With manual boxes accounting for fewer and fewer buyers each year, it's hard to see this 6-speed as anything but a legitimacy box ticked.

Hit and Miss: Cushy, but far from plush. The convertible's front seats weren't the pinchy Recaros from the Shelby Mustangs, but moderately bolstered chairs that felt relaxing and in tune with the car's sunny demeanor. The seat coverings had a beer-cozy texture that might have been a little too on the nose for the Target audience. It's driving, not tubing down the Nantahala.

Miss: Body rigidity. There's a reason no one races Mustang convertibles. This one quivers into corners like it’s doing drag in heels for the first time. It prefers a brisk pace, not a hot one. The turbo-4's advantages in weight and body structure in the Mustang coupe get wiped away here.

Hit: Top-down wind and noise. The convertible 'Stang manages air flow well enough to keep out of the soaring Beach Boys vocals I put on shuffle. You don't get in the way of The Beach Boys. Not even latter-day sub-in John Stamos.

Miss: Dated and big feel. The Mustang's likely in its golden years, and it shows in oddly dished controls in the steering wheel and mock carbon-fiber dash trim. This Mustang convertible had modern touches for safety and infotainment but the array of controls and switches and textures felt old. It's going to seem very dated when the Mach-E rolls around, too.

Hit: It's a convertible, duh. On a sunny day, the smell of fresh cut grass and lake water wafting into the cabin in a continuous wave, this Mustang life was for the moment at least, the best Mustang life—SVO or no.

Price as tested: $40,360 including premium package and High Performance drivetrain and handling packages

The hits: High output, high value, sky-high view of the outside world

The misses: Shaky bones, a kludgy clutch, feels big and dated (and will feel more so when Mach-E arrives)