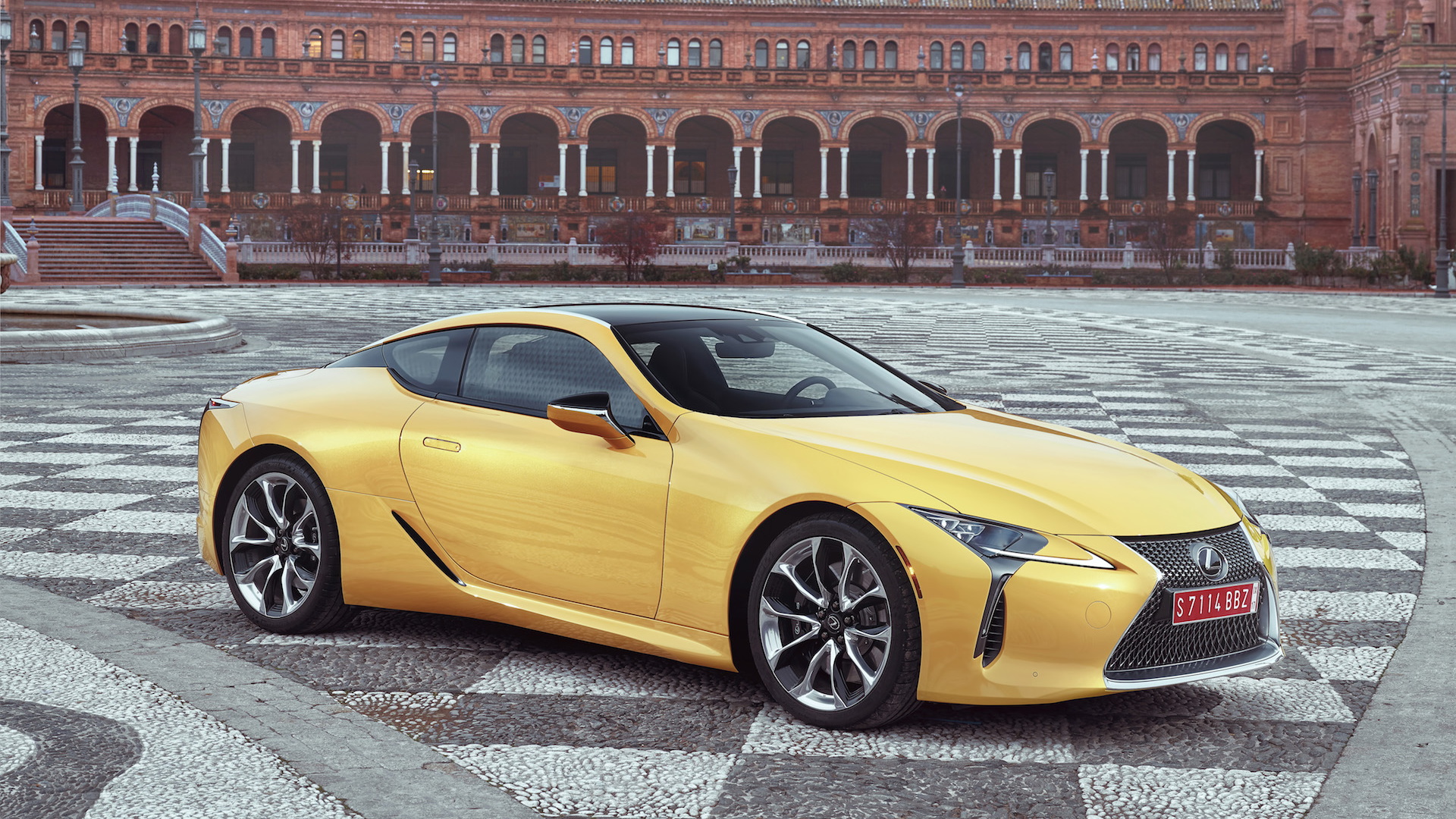 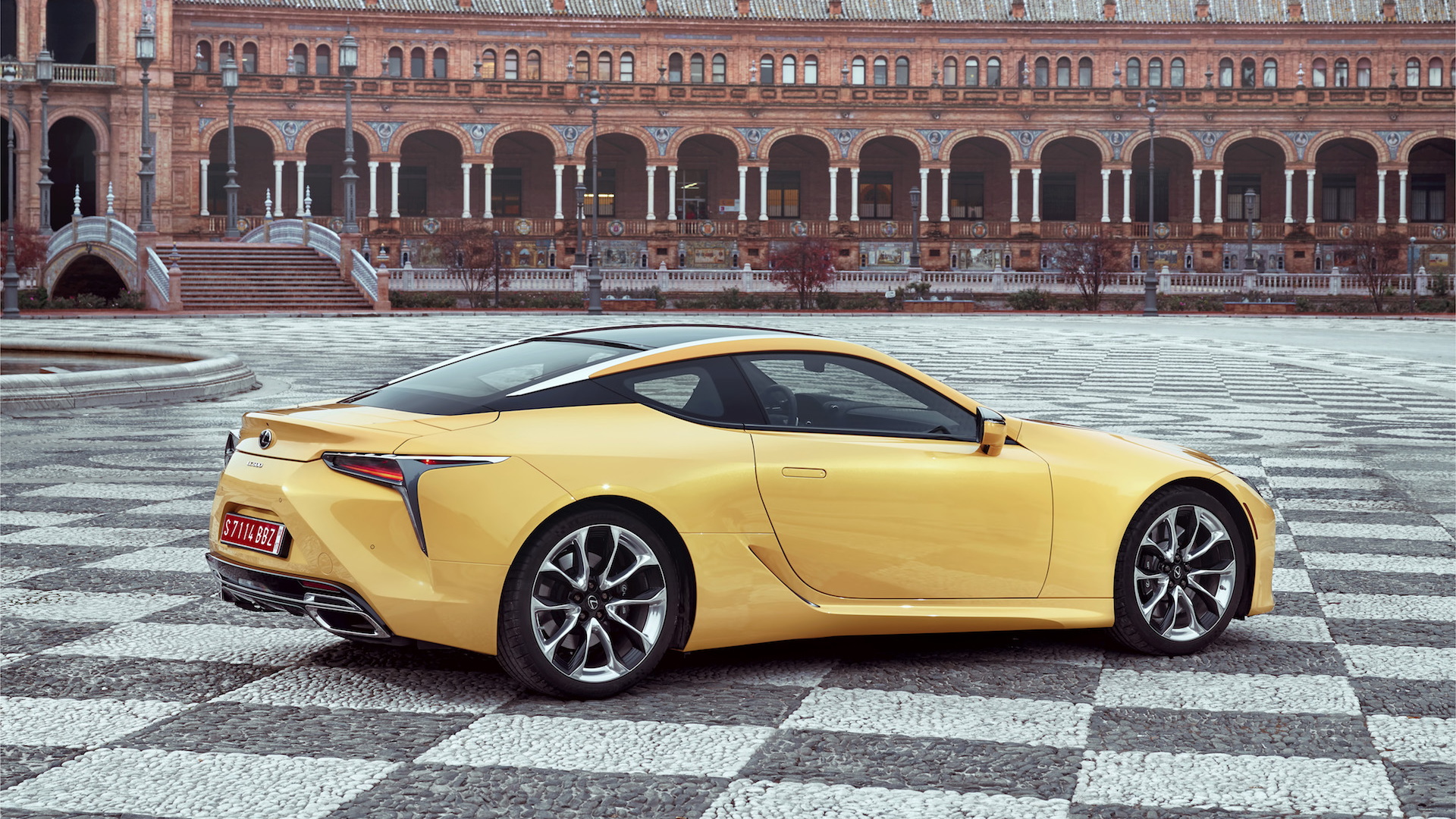 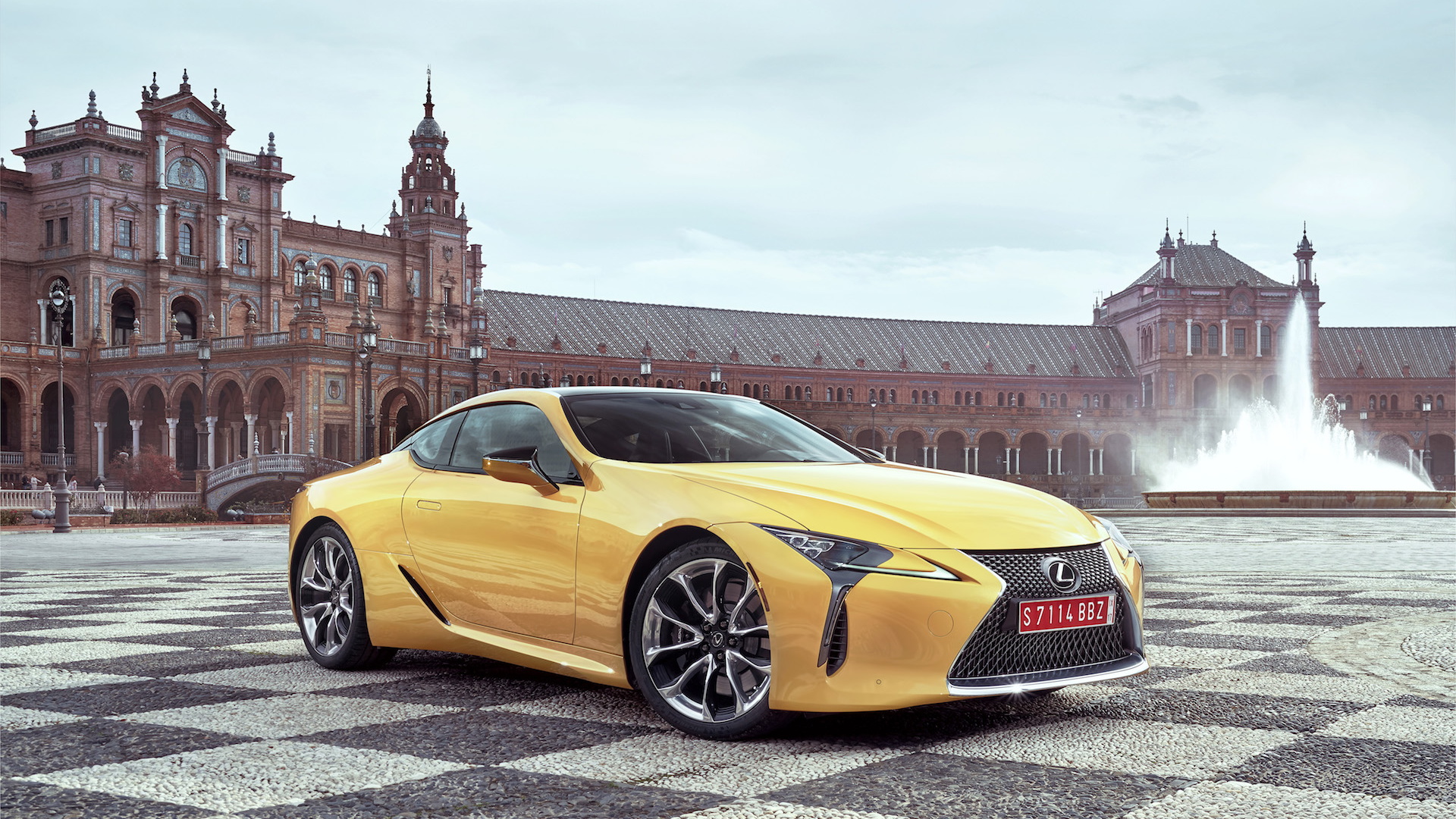 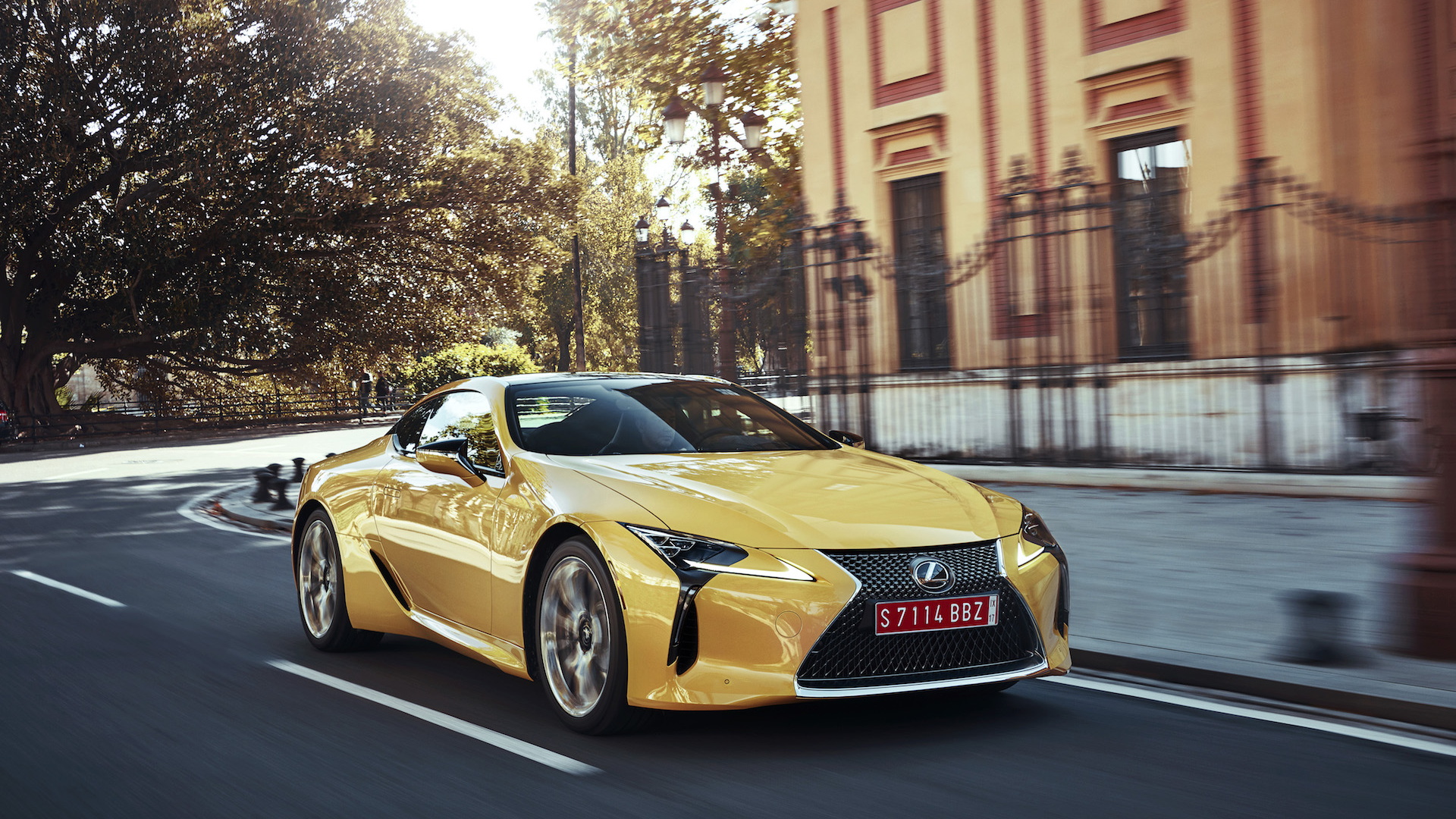 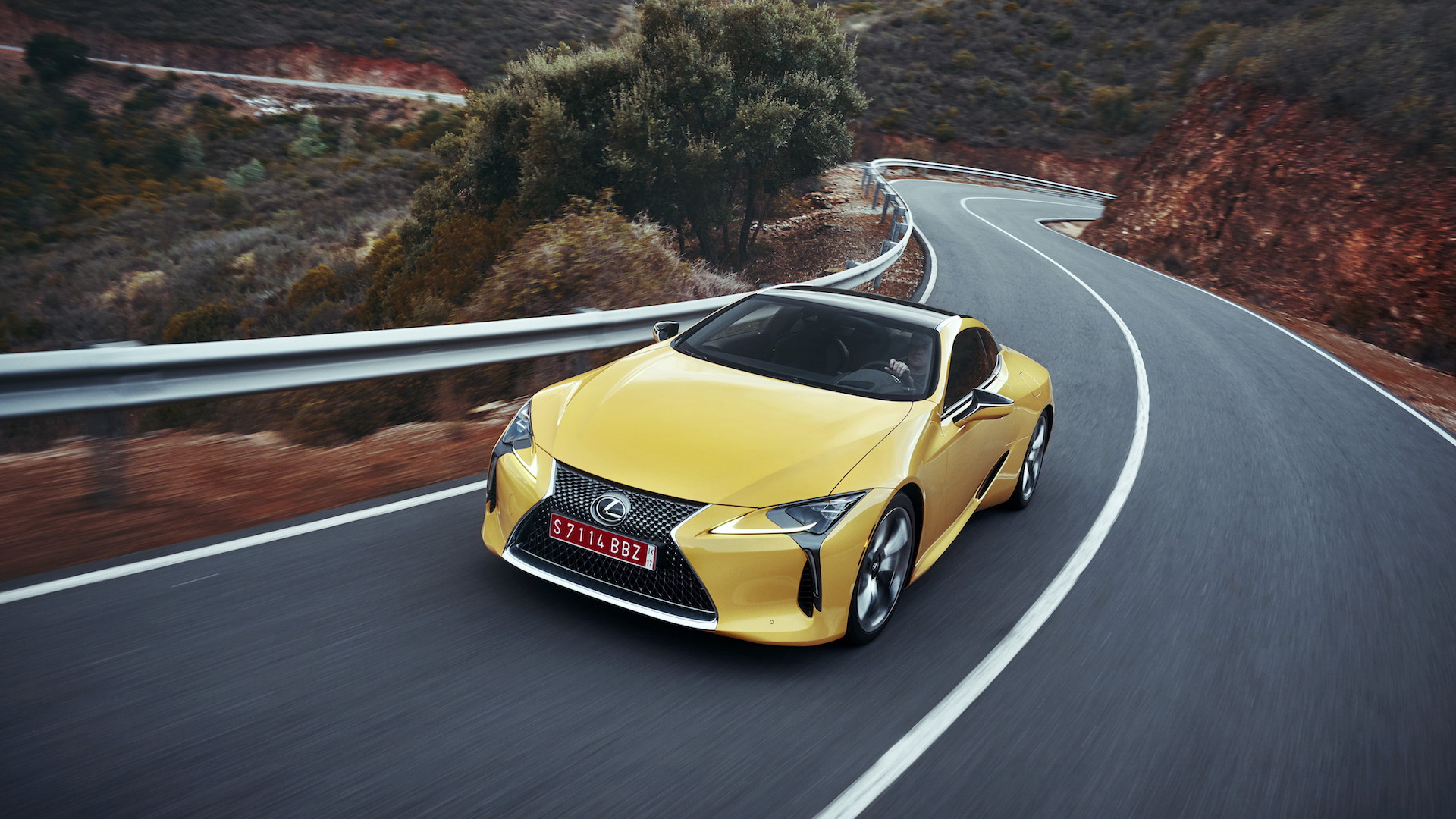 SEVILLE, Spain--If you remember the very first days of Lexus, you remember the clever ads: the champagne glasses on the hood of the car, the ball bearing rolling down its hood, the "relentless pursuit of perfection."

Forget it all. Now Lexus is chasing after world-class luxury and performance with big power, great handling and outrageous styling. They don't ever want to be called boring again.

The evidence so far: the shapely GS sedan, RC coupe, even the latest RX crossover.

Arrow to our heart

The new LC coupes were born almost five years ago, as concepts shown at the 2012 Detroit auto show. The LC 500 is that LF-LC concept, made suitable for the streets.

It's made the leap from show floor to show room largely intact, and that's a feat unto itself. Lexus says it never intended to build the LC until the concept was showered with acclaim.

With the LC, Lexus has unleashed all the styling hounds. This is a striking, stunning car, from the arrowhead LEDs that bracket its shimmering hourglass grille, to its jet-style canopy, its pop-out door handles, and its pushpin-like LED taillights. It's the first Lexus spindle grille that truly fits with the car's shape and its mission, the first to nail that sculptural dilemma.

It's not a perfect shape but it's close. It's unlike anything else on the road, with hints of the Jaguar F-Type's pinched-tail eroticism and side-glass echoes of the old Renault Alpine GTA. I can't get over the shape yet: each time I see it in its final sheetmetal, I stumble on a new flourish or a new angle played up by a different paint color.

For the first time, the LC won't change a thing from gas-only to gas-electric hybrid. Only the badges will differ.

Inside, the cabin wears gorgeous leather stitched to resemble organic waves—as if the passengers are sitting inside a blossom. The dash wraps around the driver, as in the F-Type, with a divider that walls off the controls from the passenger.

A new Lexus infotainment system occupies the wide-screen real-estate on the dash, while the steering wheel houses the now-standard dozen buttons to control cruise and other ancillary functions. The LC has touchpads and roller wheels on the console, toggles on the stalks, control stalks on the gauge cluster. It's a who's-who of rheostats and rocker switches.

The cockpit in each car I drove had hours of obviously painstaking stitching and careful fitment of leather, suede, and metal. It still could use more of the singular vision that drew the LC's aluminum skin. The horizontal dash theme gets broken up too often by add-on pieces, like that divider, or the upward-facing vents over the glovebox, or the concave dash panel sitting in front of the passenger, or the ream of control gear that studs the cockpit.

It all sits in staggering, intrusive contrast to the LC's lovely naked door handles and the organic arcs stitched into the door panels. More of that simplicity, please.

To underscore the LC's daring style departure, the cockpit can be tinted in subtle tones--or in a brave Rioja red that demands a strong pimp hand, or in a blue/orange/white combination with a strong whiff of Adidas sports shoes. Unworn ones, that is.

The path to greatness

A truly great sports car is a must-have for any luxury car brand. The Lexus LC is on that path to greatness.

It's no delicate flower, despite the bio-organic interior. It's a very capable sports car with great steering, raucous acceleration, and enough left in the tank to make the prospect of an LC F a major tease.

The heart of the LC takes two forms. The stronger version—for now—adopts the muscular 5.0-liter V-8 also used in the RC F and GS F. It pumps out 471 horsepower and 398 pound-feet of torque, pure naturally aspirated power with a bellowing V-8 soundtrack and dynamic exhaust.

That beautiful noise isn't artificial, per se. But like most luxury cars, the LC grabs some frequencies straight out of the engine bay, filters them, and pipes them into the cabin. Coupled with the exhaust system's valving, the LC rolls around like a freshly washed dog in a glorious 8-cylinder chorus.

Lexus jumps on the 10-speed bandwagon with the automatic in the LC 500, which it says shifts as quickly as Porsche’s dual-clutch. The new automatic is the size of the 8-speed it uses in other cars. Chief engineer Koji Sato says Lexus studied a dual-clutch transmission, but went with the conventional torque-converter automatic for its smoothness. The fuel-economy gains that might have come from a DCT would be easier to harvest from a really good hybrid.

Power goes to the rear wheels in the LC, with an available Torsen rear differential for better power transfer.

As with most Lexus vehicles, the gas car has a gas-electric colleague. In this case, Lexus has done its homework, delivering performance that's much closer in spirit and metrics to the naturally aspirated V-8 LC.

And finally, someone's found a way to make Lexus hybrid systems even more complex and confusing to describe.

The LC 500h hybrid gets its power from a 3.5-liter V-6 with an innovative transmission that expands the usable range of Lexus' hybrid drive systems. In it, two motors couple to a planetary gearset and a 4-speed transmission. The first motor acts mostly as a generator and as low-speed propulsion, while the second motor delivers power over a higher and wider range of speeds. Three pre-determined power output levels come from the first motor; each can be applied through the second motor to the 4-speed unit, with one of those speeds reserved as an overdrive gear.

The net: 10 forward ratios, which can be controlled by the LC 500h's paddle shifters. That expanded hybrid transmission puts the acceleration much closer to gas-only car. With net output of 354 hp, the LC 500h hits 60 mph in 4.7 seconds, and runs to a top speed of 155 mph, it's a strong performer, accompanied by a synthetically composed soundtrack pumped through the speakers.

That sound's the biggest demerit in the LC portfolio. It's too loud, too hyped up at track or highway speeds, too artificially buzzy compared to the lush V-8 roar.

Lithium-ion batteries sit under the LC 500h's rear seat to store energy for the system. The 44-kw battery contains 84 cells generating 1.1 kilowatt-hours of power. By switching to lithium-ion batteries--a first in any Lexus--engineers shrank the potential size of the battery pack by 20 percent, and saved about 44 pounds.

Battery-only power is minimal. By clicking an EV button, the LC 500h can go for about 4 miles before its battery is depleted.

Hefty, but it handles

Ball bearings, champagne glasses, feh. The Lexus LC wants you to know how alive it is from the moment you push the start button and cycle it from its Eco and Comfort driving modes through to Sport and Sport+. It's a major advance for Lexus in the direction of hardcore performance.

But like the smaller RC coupe, the Lexus LC comes together very agreeably. The supple suspension and responsive steering--and copious power--overcome the curb weight, just as they do in the RC F, just on a higher performance plane.

How does it get there? With a very tightly packaged drivetrain and suspension. The engine mounts behind the front axle to help spread its ample weight around, and massive 20- or 21-inch wheels have been stuffed into the wells, leaving not much space behind for the multi-link suspension. It's a complex setup, with double-jointed front arms for better wheel articulation, as well as adaptive dampers.

The tires do their share. They're run-flats with more lateral stiffness and more vertical compliance, so despite their size--up to 245/40-21s in front, 275/35-21s--the tires tackle a fair part of the ride damping, and add a decent dose of road noise at the same time.

The LC's brakes are 6-piston fronts, 4-piston rears, steel brakes, no carbon-ceramics on the order sheet. Not yet.

The net result: The LC is a hushed cruiser with a very compliant ride, despite huge wheels and tires. The big surprise: On the Monteblanco test track outside Seville, the LC relishes running from apex to apex, with the precision of some of its star-wattage rivals. Or better.

The performance pieces simply work in ways Lexus has only come to lately. The 10-speed--really, either 10-speed--doesn't get lost in all those gears, the amplified V-8 sounds hit just the right note. The hybrid's mostly the same at touring speeds, aside from the pumped-in powertrain noise. Its weight distribution looks better on paper, and equipped similarly, the hybrid actually felt more willing to pivot around corners than the V-8 car.

Both rely on a rear-wheel steering system and an optional Torsen differential to get them to dance. The steering setup adds up to two degrees of steering change at the rear, as it does in the Lexus GS F--and in the process, manages to feel fluid and responsive, with decent road feel and zero sense of dithering or tramlining. Could it use a torque-vectoring rear end? Maybe. We've tried that setup in the RC F and preferred the Torsen diff; we'll have to wait for an LC F to try them back to back.

For now, the LC is triumph enough. It feels smaller than it is. It's stable and smooth in transitions at triple-digit speeds, it's easy to place precisely on the track. It's very comfortable in its very alluring skin.

That skin, by the way, is mostly aluminum, but there's a mix of materials under it. The LC shares its modular platform with the next Lexus LS sedan, and Lexus says the 4-seat coupe has the stiffest body it’s ever built, with lots of high-strength steel and carbon fiber brought into the mix, even a composite trunk floor.

It doesn't pay off in weight savings, per se, and doesn't really net the LC lavish interior space. Sports cars don't care about back seats, and in that sense the LC is a true sports car.  Though it's 187.4 inches long, a little bigger than the RC coupe, and rides on a 113-inch wheelbase, it's really a two-seater. The front seats cup passengers in place firmly, though the space is a little narrow at the knees and the seats are a little light on lumbar support.

Those back seats? They’re 911-style cushions for backpacks. Trunk space is ludicrously small at 5.4 cubic feet--and it's smaller on the hybrid.

Heading for the stratosphere

On the safety and features front, the LC will be available with adaptive cruise control, forward-collision warnings with automatic braking, and lane-keep assist, but surround-view cameras aren't on the menu just yet.

A Pioneer audio system will be standard, but audiophiles will crave the Mark Levinson setup, with 13 speakers and 915 watts. Since it's Lexus, there's no support for Apple CarPlay or Android Audio. Instead, the Lexus Remote Touch system with its 10.3-inch split screen and touchpad offer infotainment input that's frankly difficult to use easily at even low speeds. A glass roof is standard.

On the options list: the Sport package, which includes a carbon-fiber roof, an active rear spoiler (up at 50 mph, down at 25 mph), and a head-up display, as well as those 21-inch wheels and the Torsen differential.

Lexus knows volumes will be low on the LC. It expects to sell about 400 a month in the U.S., peeling off shoppers disengaged from the likes of the 6-Series two-doors, the S-Class coupe, maybe even the SL.

It's going to be fascinating to watch how many buyers might be tempted out of an F-Type or even a 911, into the LC. If it's a number greater than a handful, it's a win.