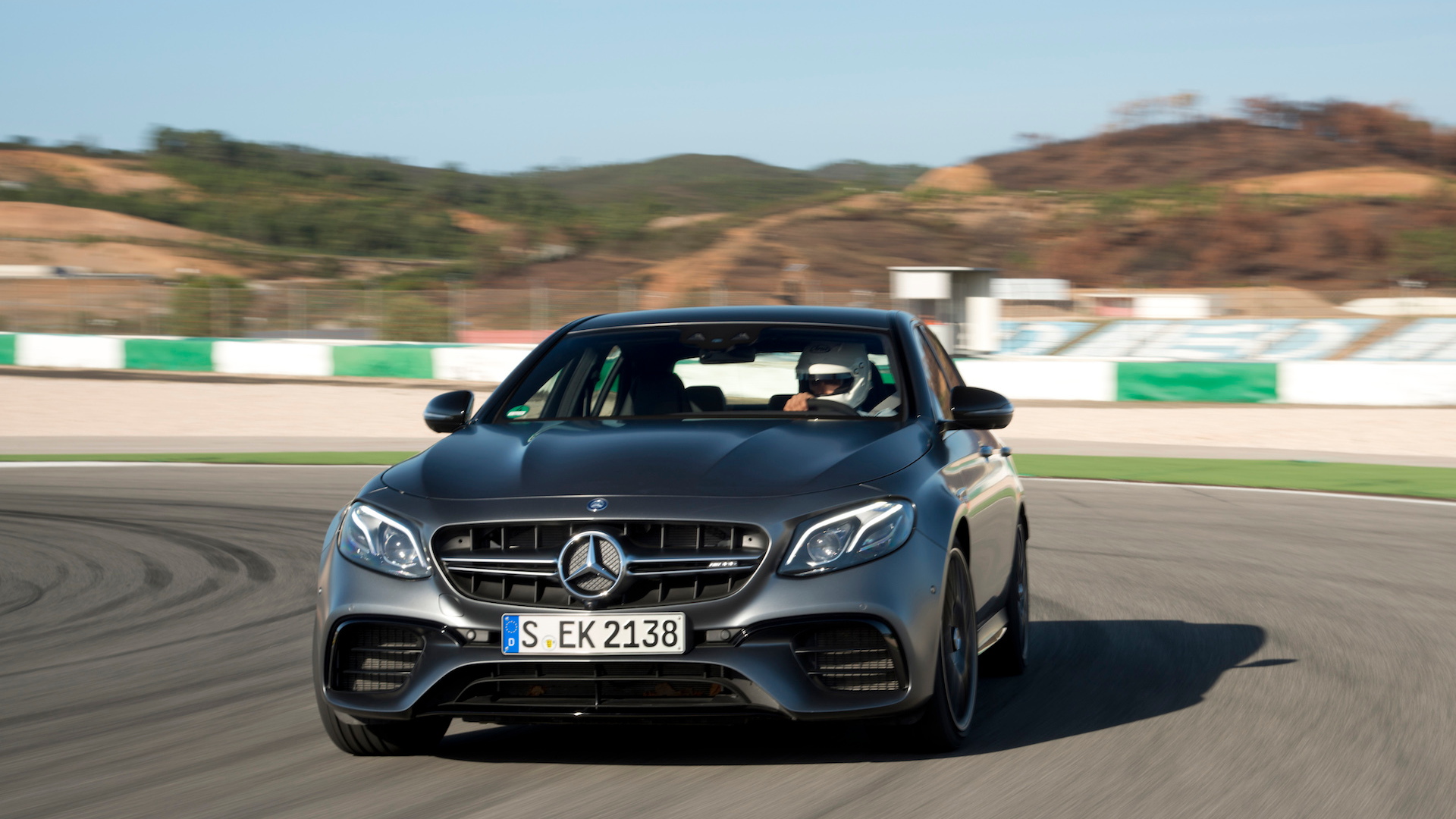 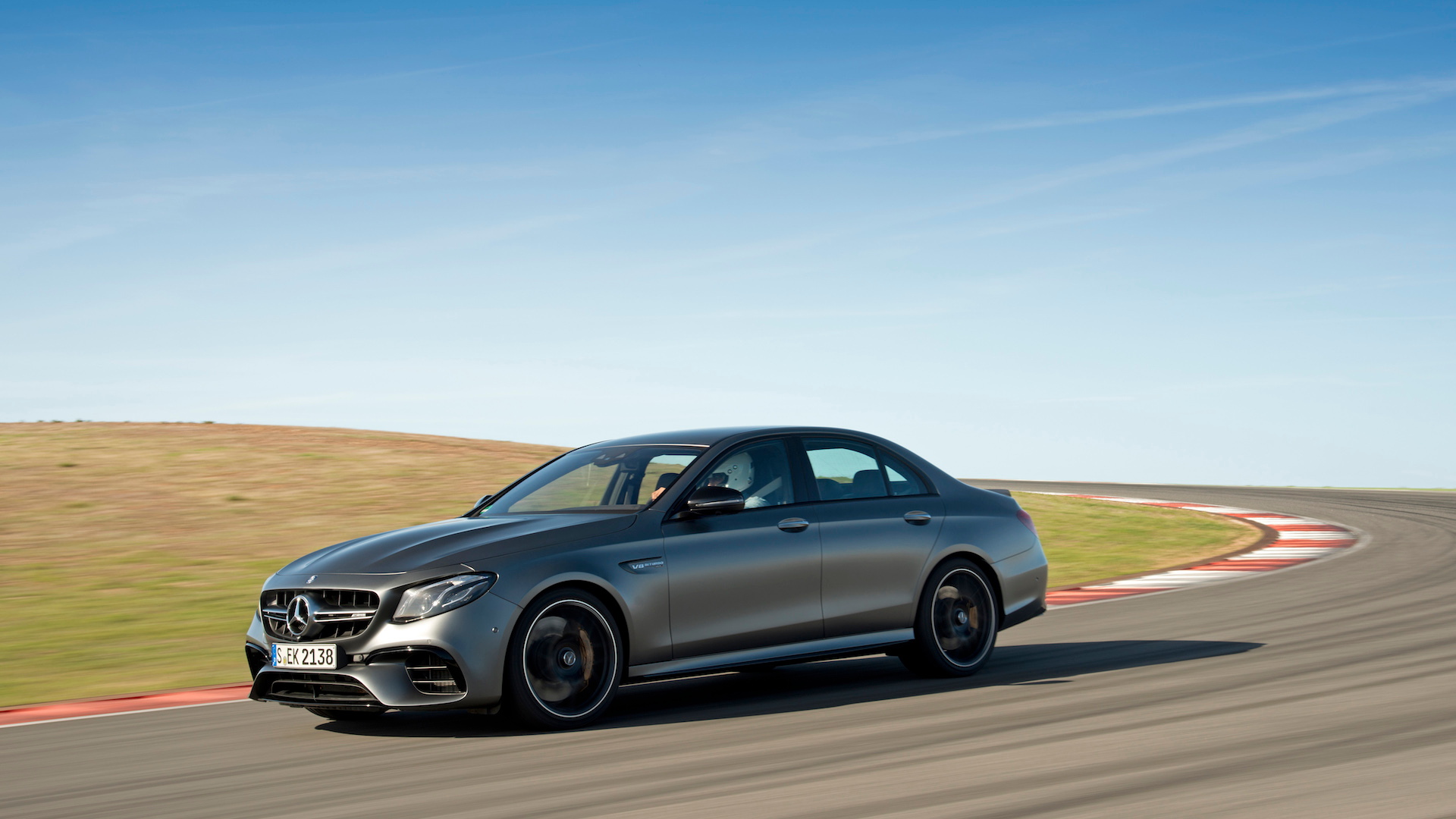 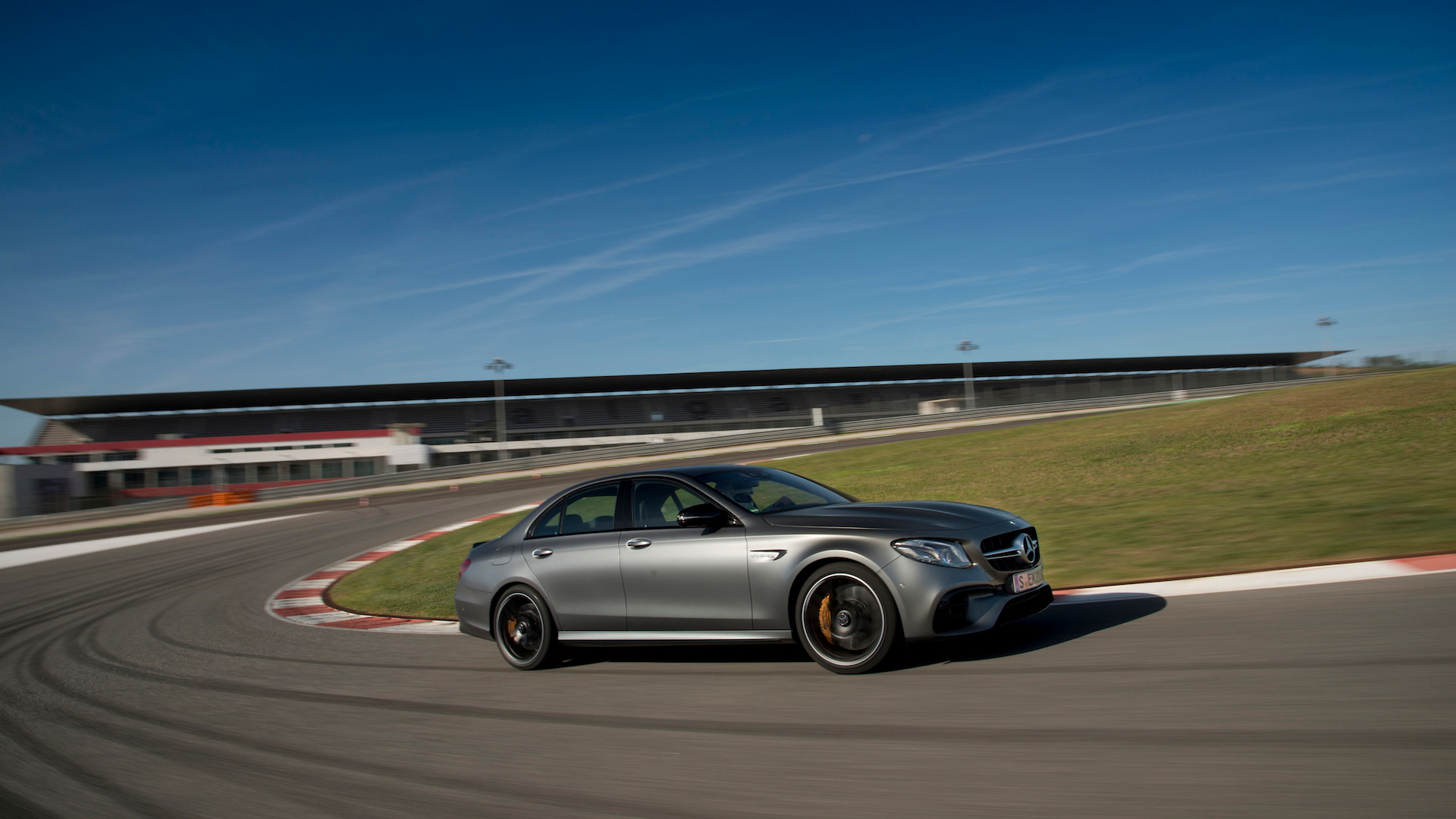 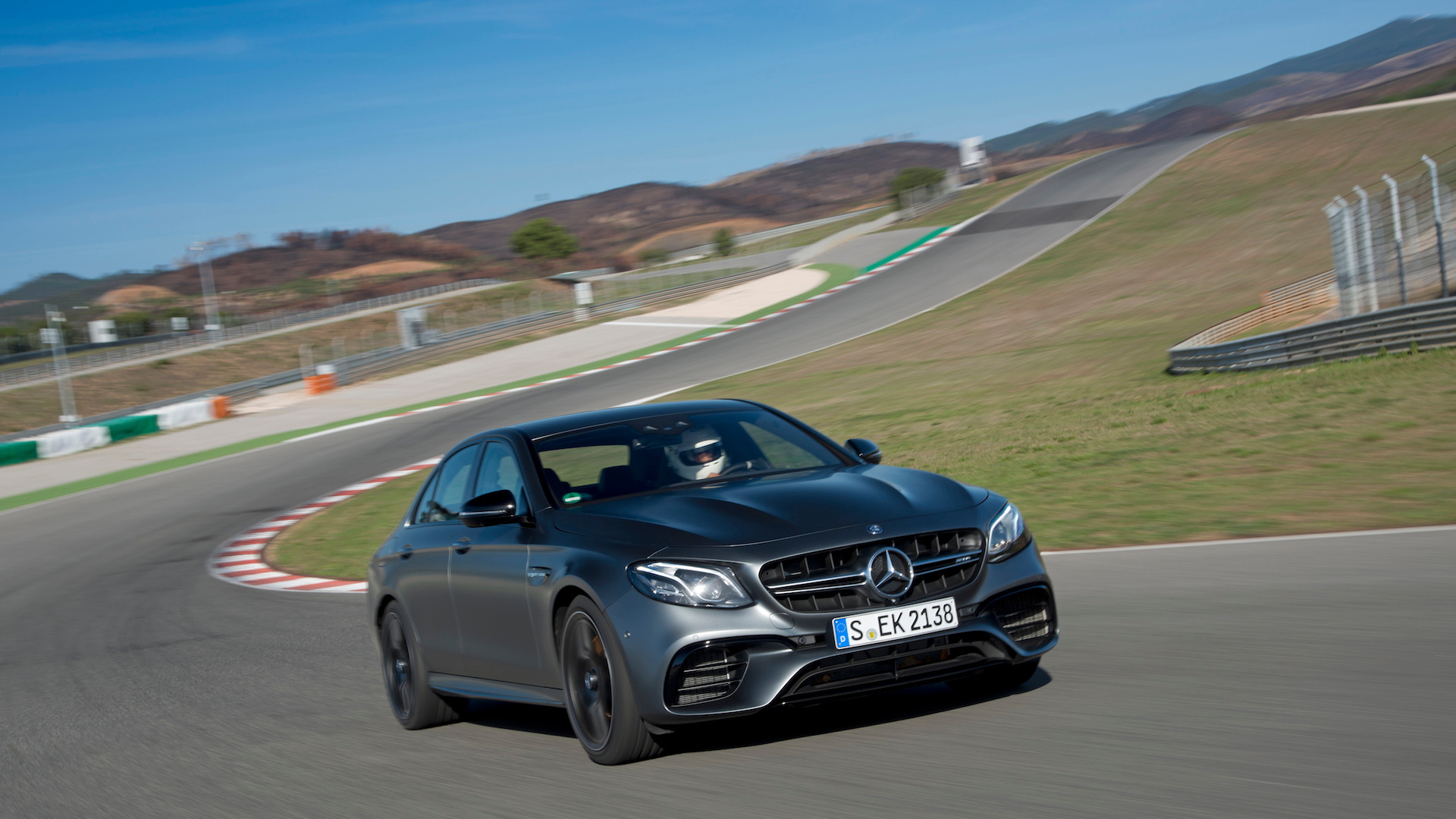 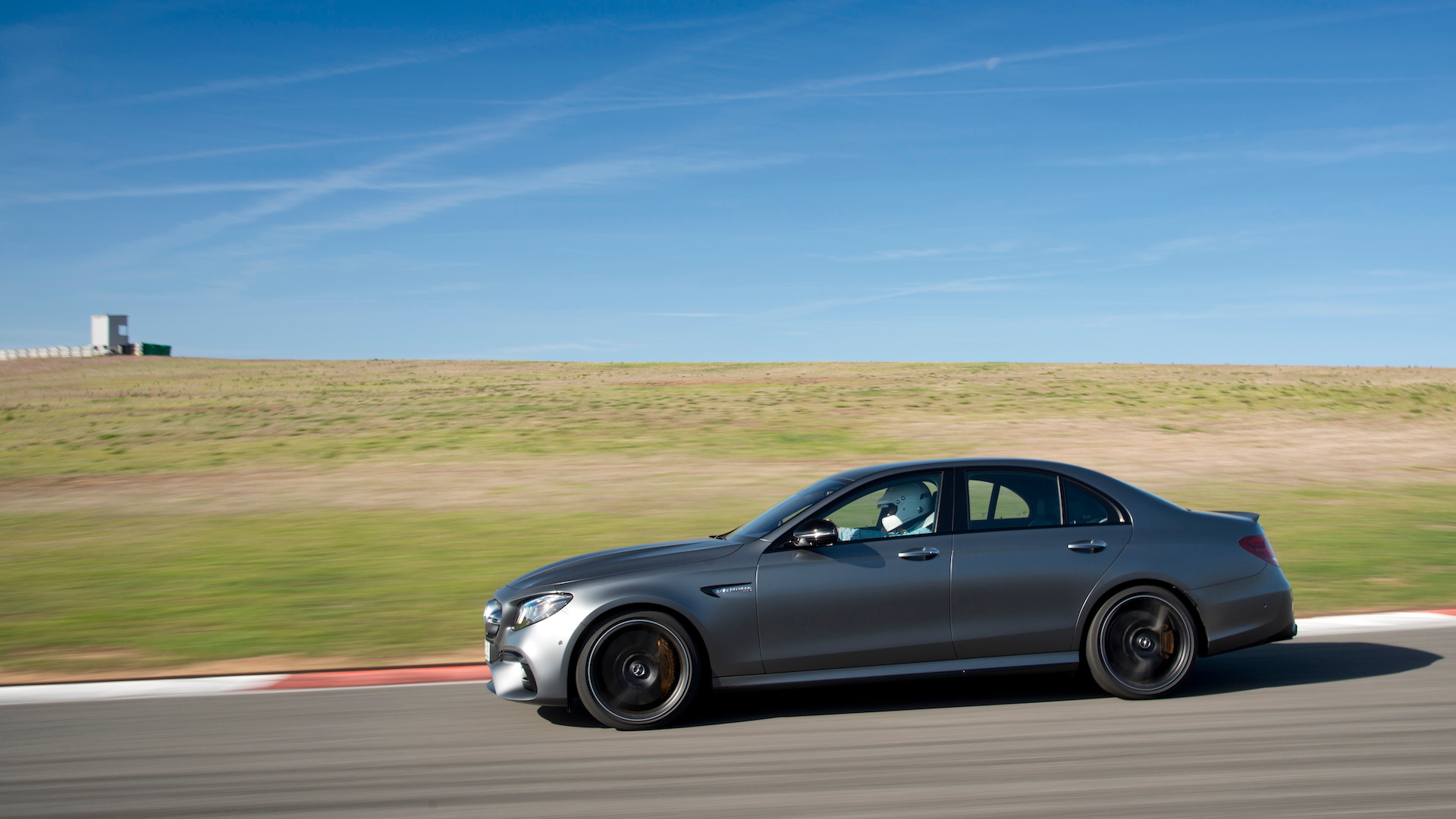 It's time to come clean, friends.

Don't worry, You're in a safe space here. Just admit it.

How about 603 horsepower—stuffed into the latest, greatest version of the Benz E-Class?

Works for us. We're just back from Portugal, after a first drive in the closest thing Germany has to a muscle car: the 2018 Mercedes-AMG E63 S.

First things first: you know it’s an E-Class by the outline, but you know it’s an AMG by the extras. Ahead of the A-pillars, the E63’s fenders swell out two-thirds of an inch to swallow wider wheels.

The grille gets twin louvers and an AMG logo. Down below a big front splitter moves air out of the way, and side vents pierce the fenders like arrows. At the back a body-color spoiler and metallic trim cap the look.

Inside, the E63 and E63 S (more on that distinction in a bit) get a flat-bottom steering wheel and an analog clock, and hard-sided performance seats, if you want ‘em.

All the cosmetics matter when you’re stopped. When you’re moving, it’s what’s underneath that counts.

In which the Hammer gets hurt

Before you get going, realize being power-hungry means not being wedded to the past. Not many memories live up to closer inspection.

In this case, it's the AMG Hammer that gets pummeled. The E63 is the spiritual descendant of that Eighties poster car--and it just pulverizes that vintage ride's bona fides.

For less than half that Hammer price, you get today's E63 with nearly twice the horsepower, almost twice as quick.

Finer would be the standard E63, which shows up a short time after the E63 S goes on sale next summer. The 63s share an engine, but in non-S cars, it's limited by programming to 563 hp and 553 lb-ft of torque, available only with a mechanically locking rear differential, and held back to a 155-mph limited top speed.

(Update: In the few hours we've been home from this drive, Mercedes has decided to only bring over the E63 S to the U.S. No weakling 563-hp model for you!)

For the full-bore, full-throated E63 S, AMG dumps in all the tech tidbits in its top drawer. The 4-cylinder and 6-cylinders from the rank-and-file E-Class sedans hot-swap out for a 4.0-liter V-8 with twin-scroll twin-turbos nestled "in the valley of a hot inner V."

Yes, that's how engineers describe it. A less lewd description would be that the turbos sit between cylinder banks, where their heat stays focused and relatively isolated, while heat can dissipate on the V-8's outside flanks.

("It's the McDLT of turbo designs," chimes in our managing editor, because everything has a fast-food news peg.)

Dropped into the E-Class engine bay, the engine fires 603 horsepower twisting up peak torque of 627 pound-feet from 2,500 to 4,500 rpm. It's the most powerful E-Class ever.

It rams all that brute force through a 9-speed automatic, a wet-plate clutch standing in for the usual torque converter, coupled into a variable-split all-wheel-drive system. So powered and geared, the E63 S catapults to 60 mph in just 3.3 seconds, on to a top end of 186 mph.

It'll show off its 7000-rpm redline when you engage launch control. To get there, you just dial the car into Race mode, then by pulling the paddles, pressing the brake, and flooring it.

On the opposite end of the fiend scale, the downsized AMG V-8 has cylinder deactivation, which shuts down cylinders two, three, five, and eight in light load conditions. It can declutch the powertrain between 37 and 99 mph for even better fuel economy--but so far, there's nothing in the way of U.S.-street fuel economy numbers.

Don’t worry about pesky EPA numbers just now. Put your seat belt on instead and try to slow your heart rate when faced with an F1-ready track and about 45 minutes to get to know it intimately.

Dialing out of the pits at the Autodromo Portimao, it’s all you can do to concentrate on what’s ahead of you. Grey sky, grey clouds, grey pavement and grey cars—the best way around is to follow the bright-red brake lights ahead of you, and figure out this tough track, corner by corner.

It helps to know where you are, dynamically speaking, among all the toggles and switches on the console and steering wheel. Just about every major car-control system is configurable, from its electric power steering, to the stability and engine controls that operate in invisible concert.

The suspension goes far beyond stock E-Class: it gets a four-link front design and a beefed-up, multi-link rear to make way for the E63's wider track and boosted stability needs. There's more bracing and a tubular stabilizer bar at the rear, even adaptive engine mounts that reduce harshness on road and reduce steering interference in track driving.

For its final act of letting its hair down, the E-Class has three stability control modes: full on, Sport and its permissive levels of yaw, and Off, which isn't truly off since it comes back on during hard braking.

All those pieces give the E63 the ability to do deep knee bends of the professionally aerobic order. It has the driving range of a docile roadmaster and of a super sedan, as its Dynamic Select system switches out of Comfort into Sport, Sport+, and Individual modes.

Dynamic Select has control over engine, transmission, suspension, steering, stability, and all-wheel-drive torque split. Beyond that, there's also manual mode for the transmission, with gear changes actuated by shift paddles.

Up until now, on the roads to the track, the E63's Comfort mode delivered just that: an eerily smooth ride that belied the big 20-inch wheels, low-profile tires, and AMG's reputation for stiff tuning. It's particularly unruffled on public roads thanks to the E63's three-chamber adaptive air springs and adaptive dampers.

Set it into Sport mode, let the 9-speed hustle through the gears or help it along with the shift paddles, and the E63 fires up some righteous sport-sedan moves.

Throw it around through the dips and dives at Portimao, and the E63 shows why it’s earned a reputation as a big bruiser and a world-class cruiser. It yanks you out of the pits with a frantic V-8 howl, turbos lighting off in unison.

Some engine noise pumps in the cabin through the sound system. It's de riguer for big quiet cars that need to sound alive. It's just more of the rippling AMG engine noise we love.

On the track, the E63’s huge Pirellis claw for grip, while the all-wheel-drive system shunts power front and back, and the torque-vectoring rear moves it side to side. That gives this E63 better power delivery than you could get from a fixed-split system, or even from a rear-drive car, AMG says. All the while, the E63's air springs are lasering off body roll, its adaptive dampers cauterizing the bumps.

Lap after lap, it’s relentlessly grippy—dial in some steering, dive into the throttle, and the only thing you’ll wonder about is how much longer you'll be going airborne over Portimao’s biggest blind hills until night falls.

MORE: See the 2018 E-Class coupe before its Detroit show debut

It comes soon enough, just before the hard-worked tires and brakes started to feel the strain of three packs of drivers pushing them morning, noon, and late afternoon. The tires were notable victims: on my first laps through, big chunks of something flew toward my car's windshield. At first, I thought the car ahead had puked a GoPro; on the next lap, I realized it was bits o' tire matter peeling up from road surface or from car ahead.

By lap three I figured it was vaguely normal and kept sliding through the wide arc of a final off-camber dip, edged and confident all at once, as the E63 rocketed back into Portimao's front straight.

Left unexplored: the E63's factory-programmed drift mode, disabled by the time our track group got to the fun part. It’s certifiably nuts for a car this big to do what a Focus RS was born to do, but customers want play time, AMG execs swear. To access Drift, you'll need to know the secret code: first, switch to Race mode, then shut off stability control and drop it into Manual shift mode, pull both paddles then flip one to confirm. Throw it into a loop, and the E63 sends everything it has to the rear wheels, shifting power to the outside wheel to keep it sliding sideways.

What about the tires? What, you don’t have a five-figure budget for track days?

Under all that, the E63 is still an E-Class. Drive Pilot takes the next few steps to autonomy with assisted steering, lane-keeping, and stop-and-go following at autobahn speeds. Ambient lighting and leather bathe the cabin in a rich glow. Twin high-resolution screens toggle through lots of looks, including a Track Pace mode that shows your laps, and where you were slow, and where you were fast. Track Pace plugs in to GoPros, too.

AMG lets you have your choice of seats with leather and microfiber, or performance seats with fixed headrests and hard seat sides. High noon is marked on the steering wheel so you know where you are, and there's an analog clock.

Freeze time right there if you want, but the power-hungry will want to speed up the clock to summer of 2017. That's when the E63 goes on sale in America, when silly things like EPA fuel economy will be confirmed.

That little S at the end of the E63 badge means a lot, it turns out.