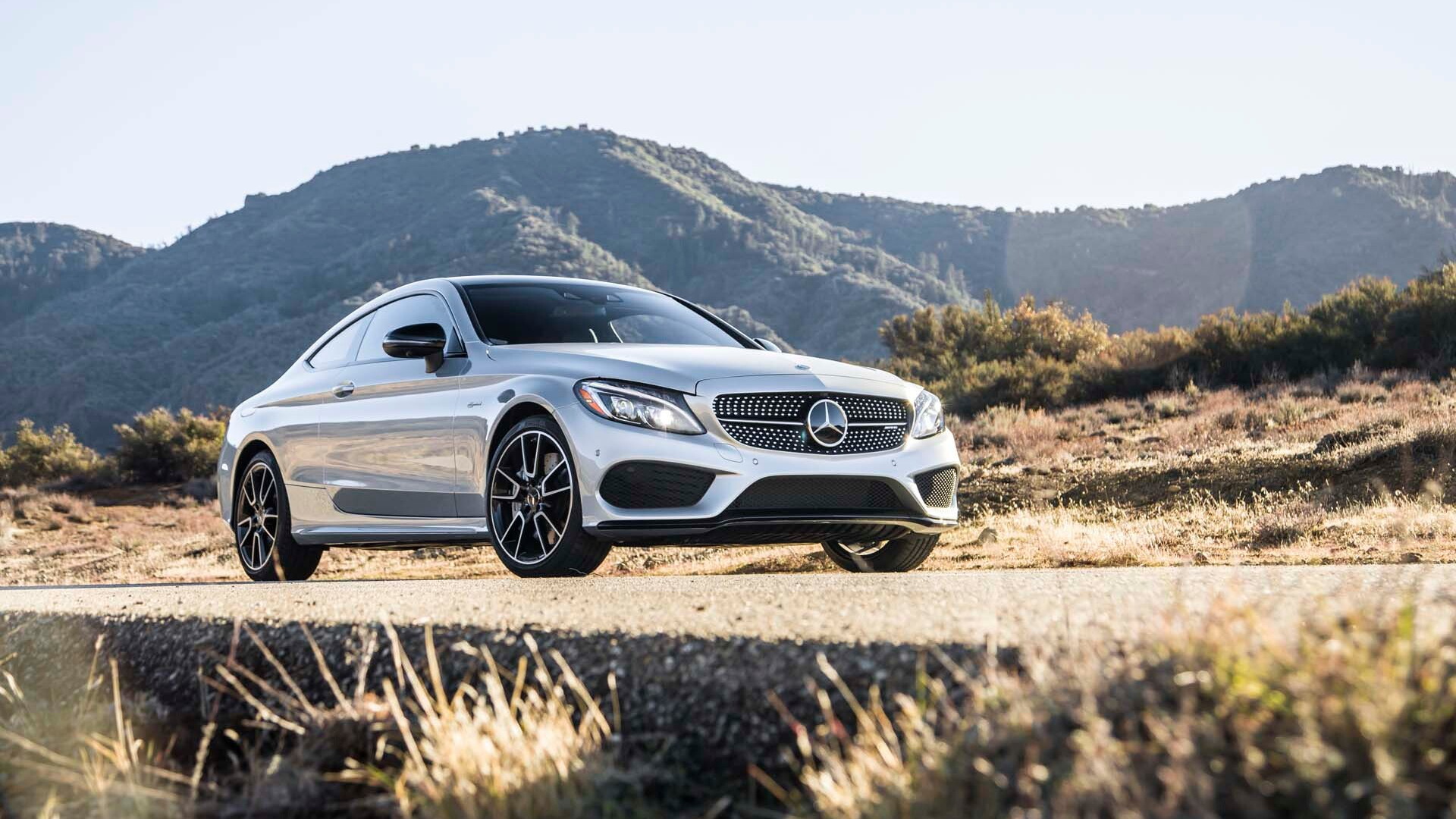 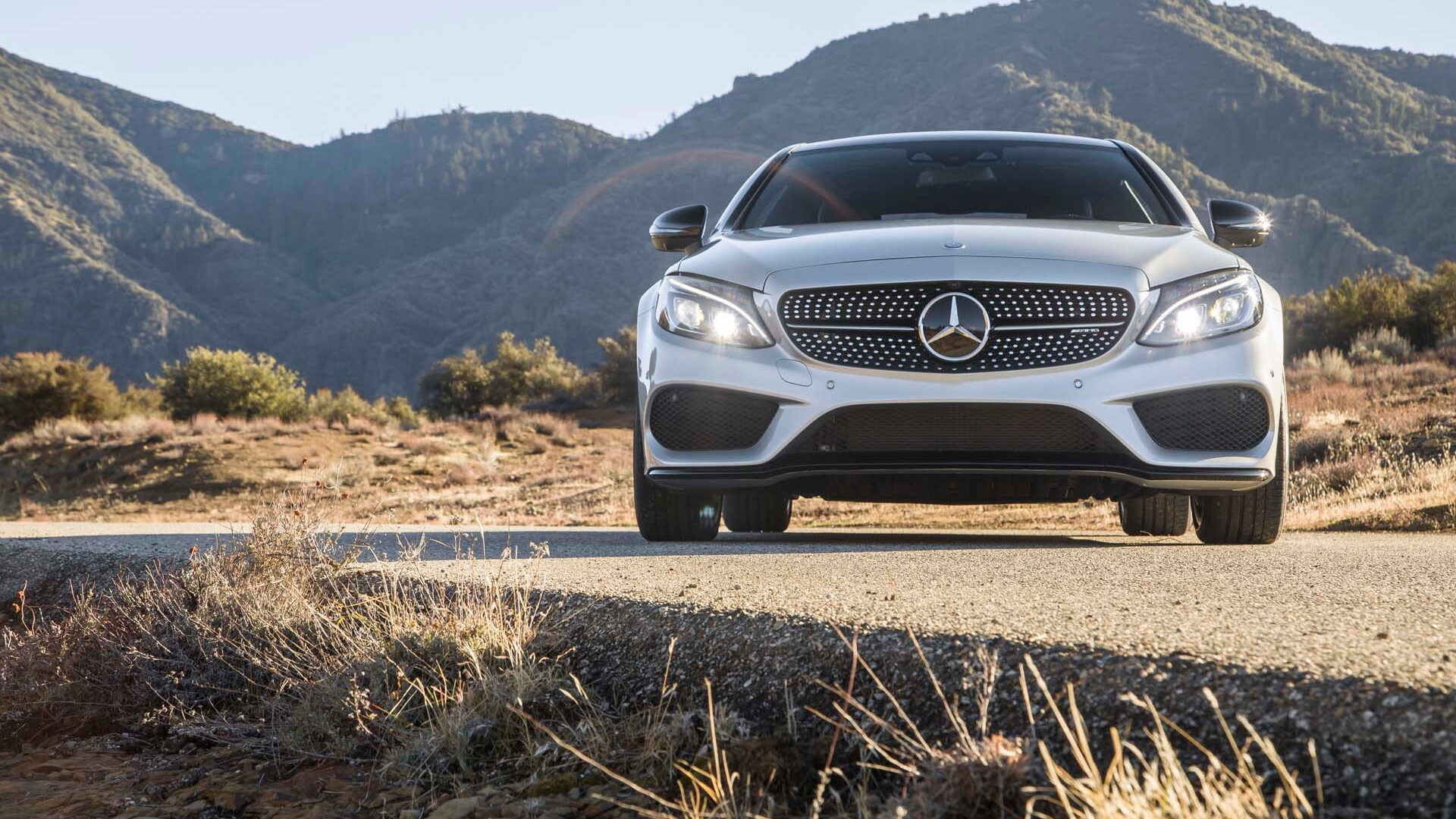 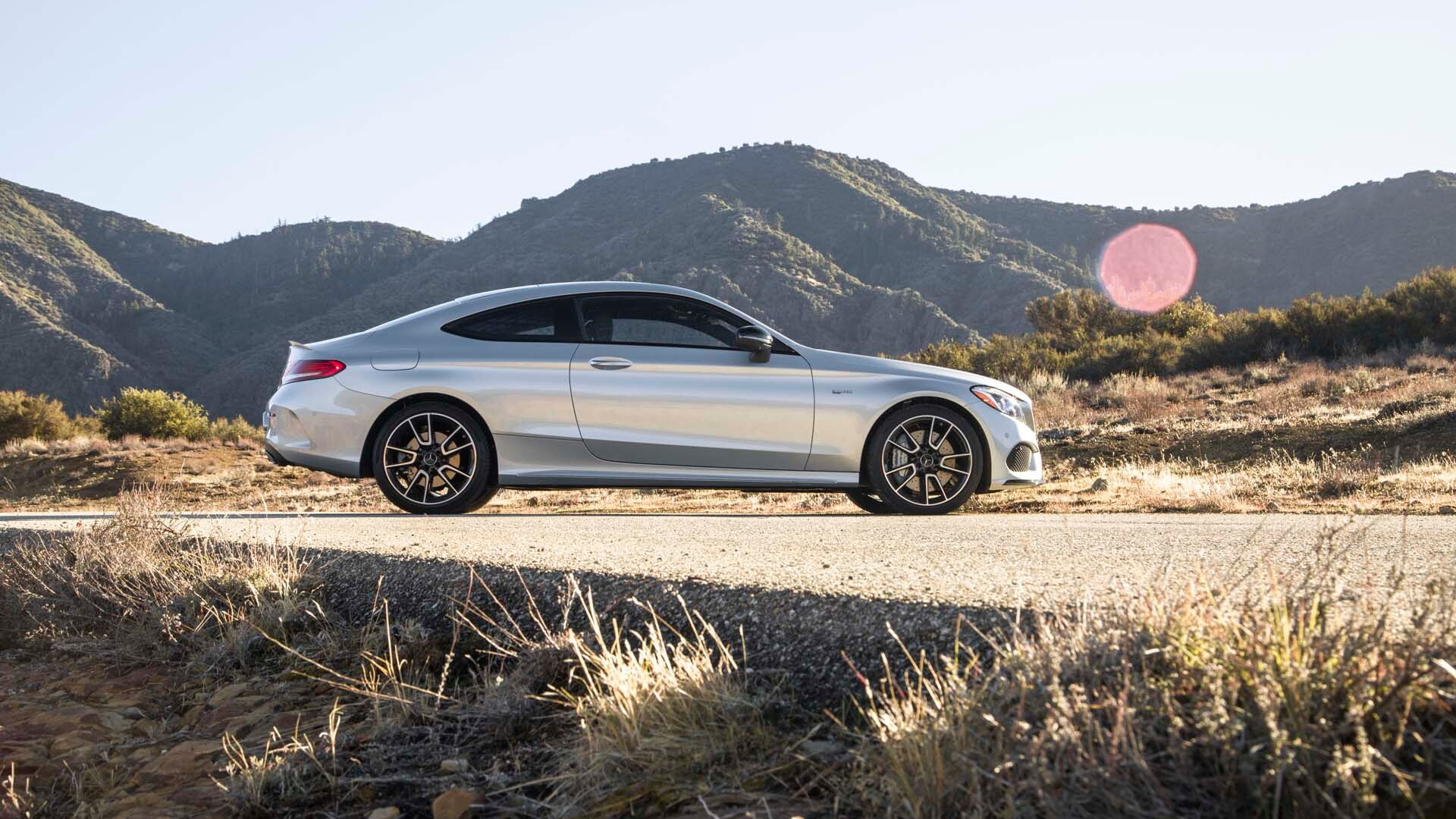 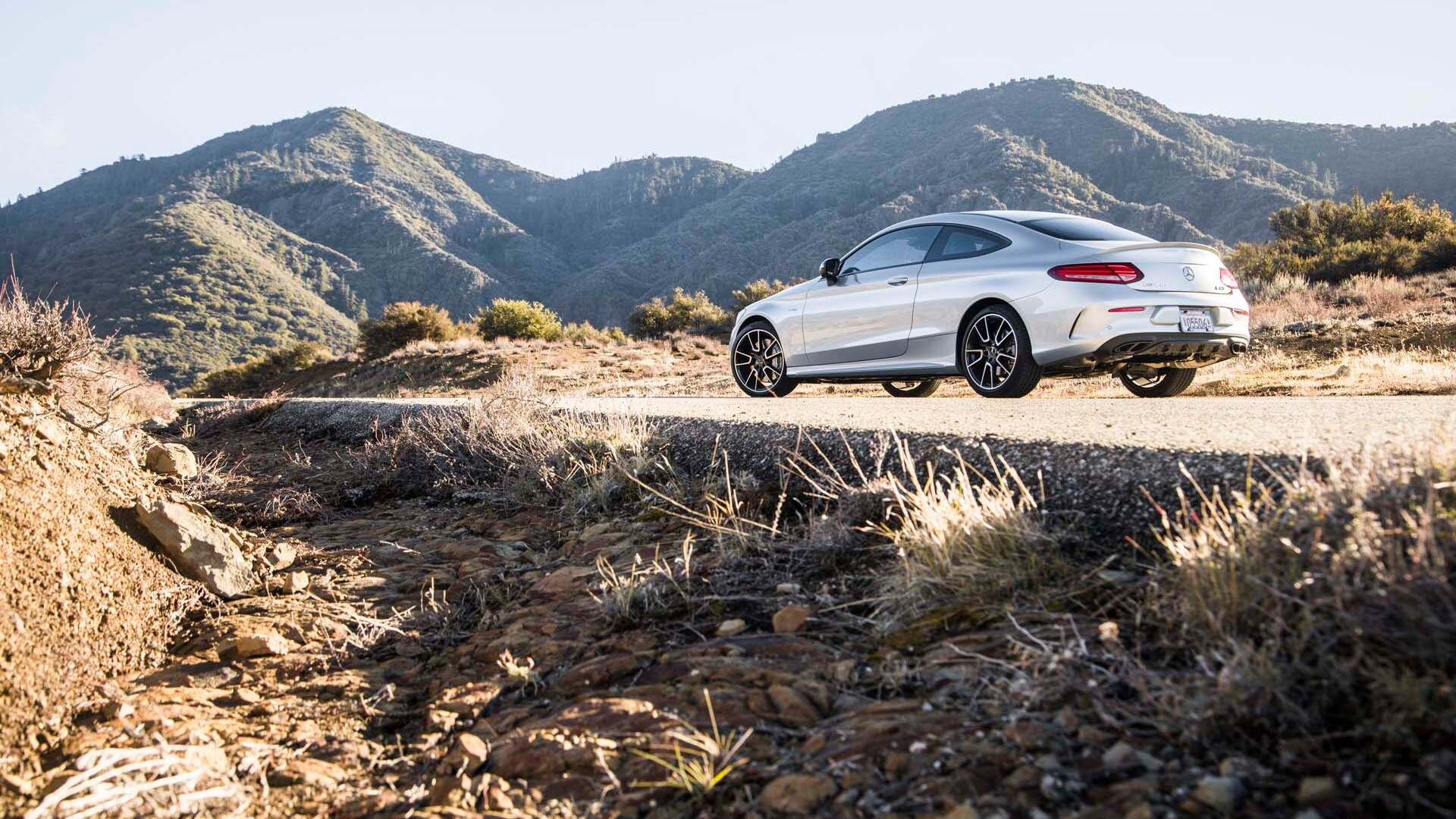 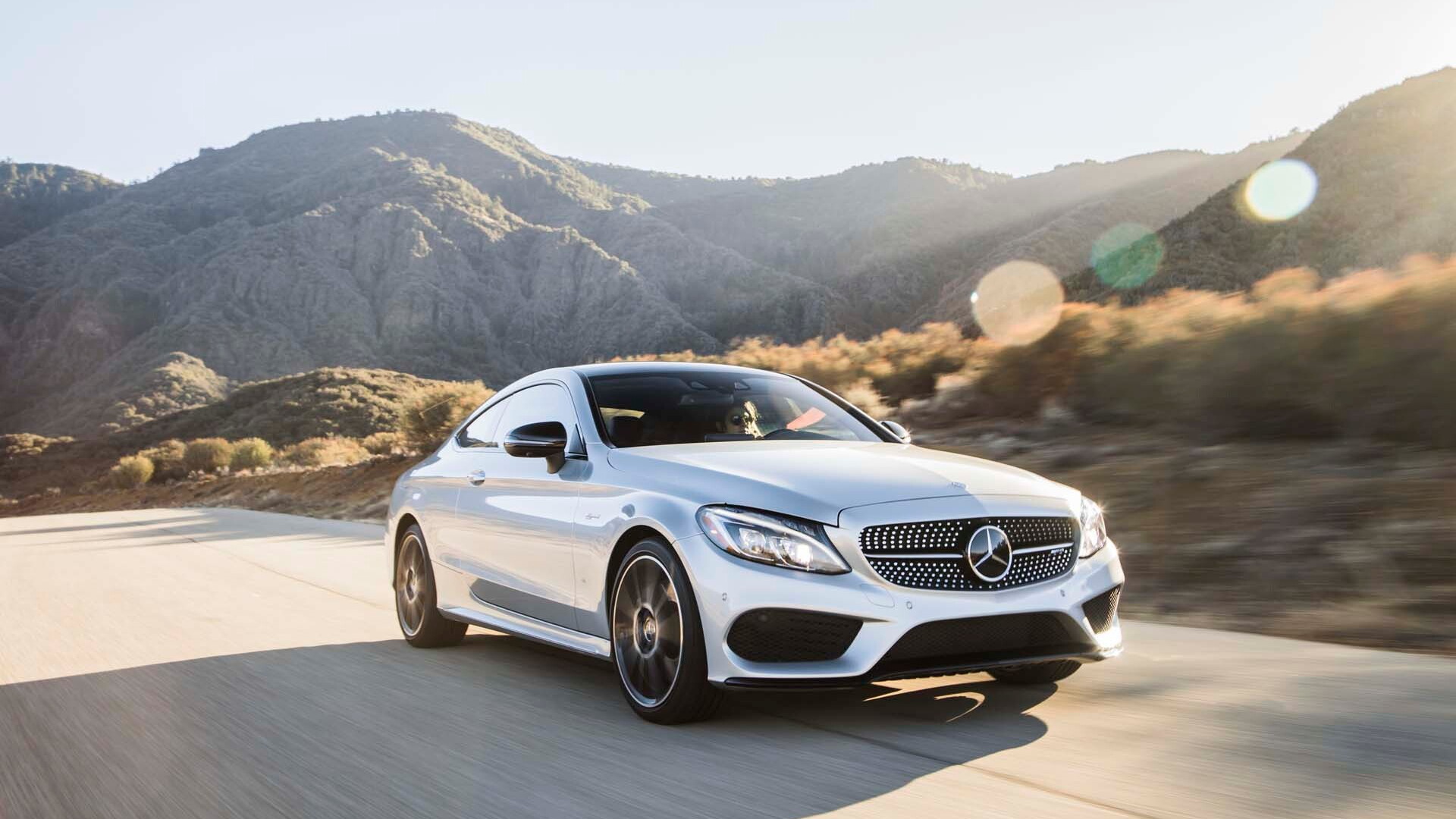 Its impossible not to notice that the 2017 Mercedes-AMG C43 has too much tire. The 225- and 245-millimeter, 19-inch Pirelli P Zero rubber sticks to the road like hot Doublemint, and the standard traction control setting has a short leash anyway.

Back and forth in the C43 along coastal roads, we find investing too much into the throttle pays only small dividends.

Every motion up and down the canyons of Southern California is quick and without drama, too. Nose in to a corner with too much gusto, and the front tires feel like they cut slip angle down to the Fed's fund rate. Too quick with throttle on the way out? Nanny systems take care of that faster than saying the word "oversteer."

Breaking traction feels less natural and requires more persuasion than a Skittles-covered campaign speech. When it happens, the front wheels either drag the wayward rears forward, or the throttle cuts quick enough to bring it back into shape.

Did you say you want drama? I'm starting to think that comes with a V-8 after each successive turn at the wheel. The Mercedes-AMG C43 feels quick, but also feels like it's getting in its own way—or more accurately, I'm getting in its way.

The Mercedes-AMG brand now nearly reaches across the entire portfolio, and now nine models serve as jumping off points into the deepening abyss coming out of Affalterbach. These are the 43s. The baby AMGs.

The AMG 43 starting nine share common traits: a twin-turbo V-6 up front (not made in Affalterbach), a 9-speed automatic in the middle, and all-wheel drive and sport suspension for all four corners—except for the SLC43, which is rear-drive only. Those substantial upgrades may get lost on a bulky GLE SUV, but in a nimble C-Class coupe they take shape once the initial sticker shock wears off; the C43 starts at $10,850 more than a C300 with all-wheel drive.

That's not an insubstantial amount of money, but AMG boss Tobias Moers' eyes light up when he talks about the finer details his company throws into the C43 for that ten grand.

He dotes over the C43 coupe's new steering knuckles like he forged them himself. The C43 coupe's insanely quick steering ratio over a base coupe isn't an accident; every motion should be deliberate and effective immediately. Months were spent bringing a C43 up to AMG's standards, which are admittedly more civilian now with the AMG 43 line as opposed to the more serious, more raucous, more raw C63.

But the C43 is a trackable car, Moers insists. Every AMG—even the ones without signed plaques on the engine cover, which are notably absent from the Mercedes-AMG 43 lineup—should enter and exit corners quicker than they do dealer lots. Whether you're likely to find a $50,000 luxury coupe at a track is debatable, but you'd be hard-pressed to find an AMG badge gathering dust at Benz stores.

Drive after drive, it becomes clear that the leap from -Benz to -AMG doesn't happen by just raiding parts bins. It happens once I stop looking at the details and start looking at the C43 as a whole car.

The only place I can sit doesn't whet my appetite. The buckets aren't as deep or supportive as those of the C63 and the thin, short shift paddles click through the gears, but not without rolling their eyes at me first.

The 9-speed automatic's spread throughout the AMG 43 line is an upgrade on the 7-speed in the number of cogs alone, but in terms of manual response, the new unit feels more hesitant. The shorter, steering-wheel mounted shifters don't have the confident feel of posts that I'd like to consistently grab and go—not like the BMW 340i. Software can speed up the shifts of the 9-speed, AMG engineers say, but more than once I asked for a new gear that wasn't delivered on time.

But letting the C43 handle gear changes makes more sense, and the 9-speed drops four gears in a blink to throw me past building California seaside traffic. The transmission's attitude can be smartly controlled by clicking through the Dynamic Select modes that also dictate throttle tip-in, exhaust sounds, and suspension response.

While the optional sport suspension hides the C-Class coupe's somewhat-brutal base setup, it's the only way to go in the Mercedes-AMG C43—and the car is better for it. In "Comfort," the suspension soaks up the 19-inch wheels' ability to crash over dimes; in "Sport+" it brings the AMG's parts altogether like a fresh pair of Spanx.

As the miles pile on, the curves disappear in the mirrors, and the optional performance exhaust settles, it's clear that the C43 isn't so much of a prequel to the C63 empire as much as it's a standalone entry. Like the 340i, the AMG C43 is a performance car in its own right, and doesn't need to exist as only a segue to other things.

The C43's 4.6-second 0-60 mph sprint may be well behind the C63's time—AMG badges can't do miracles, after all—but stopwatches can't see everything else.

From the neatly pressed exterior and the standard all-wheel-drive system, the C43 is a more complete daily driver, especially when compared to a C300 4Matic that's more likely to be found in the real world—with a price likely to creep dangerously close to that of the C43. Moers says that the C43's existence will give the C63 room to grow wild and I'm all for it.

Long loops through the Santa Monica mountains produce more smiles anyway. Despite everything that there is to love about the C63, the smaller C43 doesn't disappoint by missing those performance targets so much as it distracts from remembering what those where. The C43 thrusts with less feeling than the C63, but also with less attention required. The C43 is more buttoned up than I anticipated, and it's better left to its own devices.

Asking the C43 to kick out its tail is missing the point. Example: The optional performance exhaust spits and crackles in the Sport and Sport+ settings, but it sounds nothing like the C63's sonorous V-8. That isn't pure heresy—it's just more fun.

And that's the C43's mission: balance before batshit, completion before competition.

The leash is short on the 2017 Mercedes-AMG C43 and that's just fine. For most of us, it'll mean less rope to hang ourselves with.

That is, assuming I want to break traction with those Pirellis again.