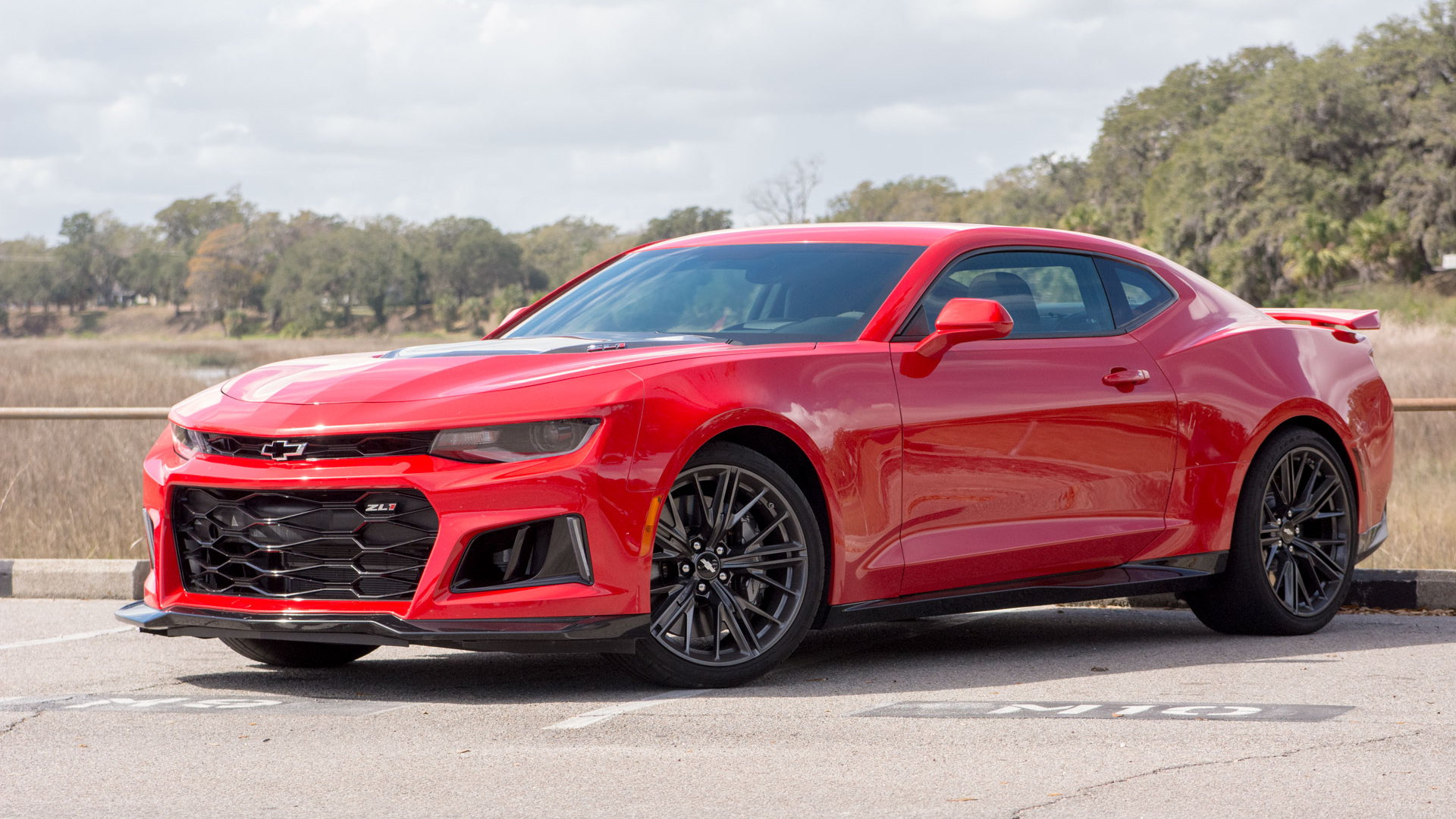 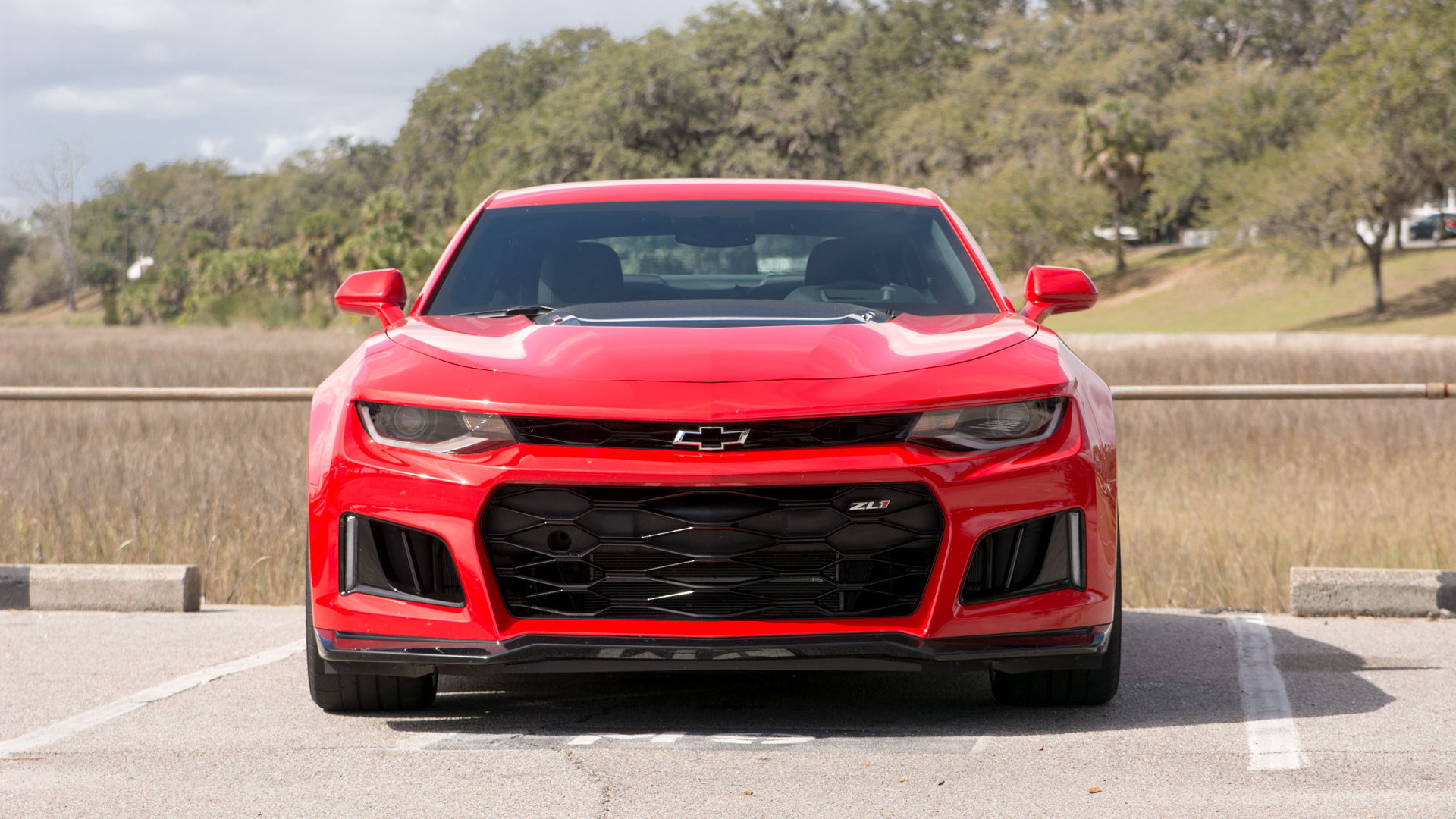 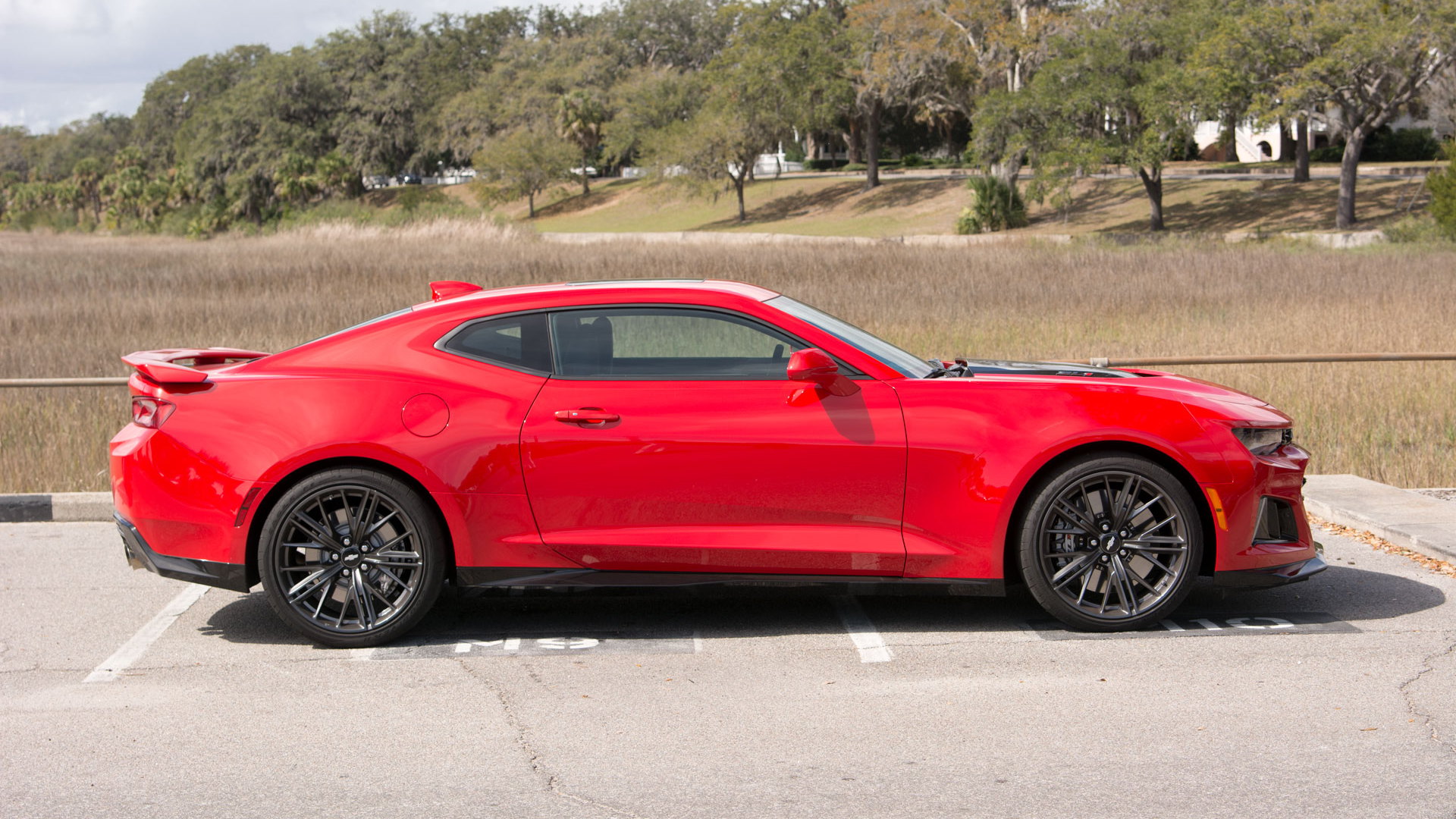 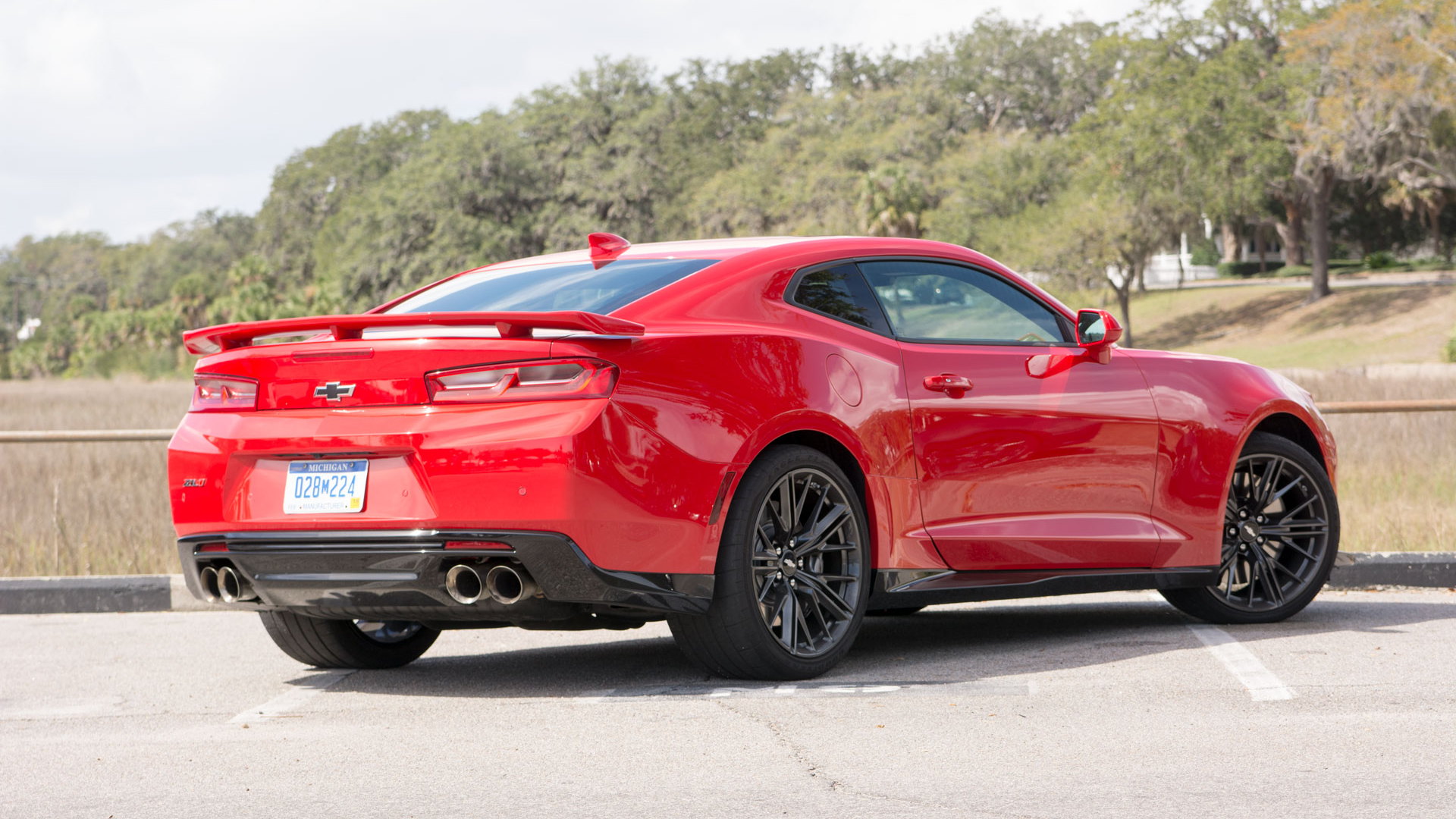 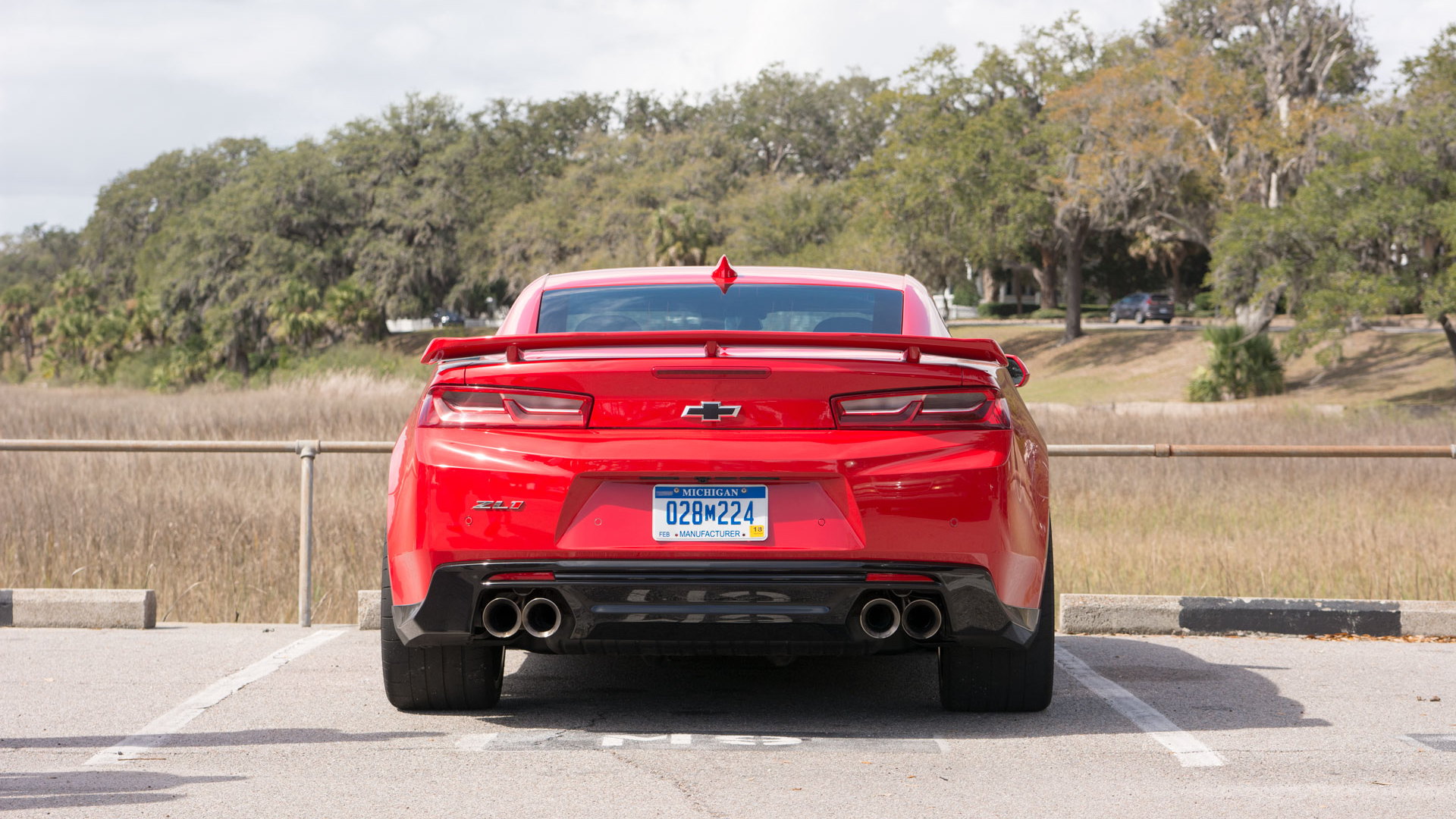 What's the right amount of horsepower? After driving hundreds of different cars in my career, I'm very confident the answer isn't “As much as humanly possible,” otherwise we'd all be driving around in Top Fuel dragsters, and that'd be a real nightmare during rush hour. And we'd be deaf. Very deaf.

No, I'd argue the sweet spot is close to 400 horsepower, rather than 500, 600, or 700 ponies. A 500-mile drive from Charlotte, North Carolina to Daytona Beach, Florida for the Daytona 500 festivities in the 2017 Chevrolet Camaro ZL1 (followed by a 180-mile jaunt in a 2016 Ford Mustang GT Convertible) reaffirmed my position.

The latest ZL1 comes to bat with a supercharged 6.2-liter LT4 V-8 that Chevy borrowed from the ZL1's big brother, the Corvette Z06, and its snooty cousin, the Cadillac CTS-V. In the ZL1, the LT4 produces 650 horsepower, 650 pound-feet of torque, and will officially scoot the Camaro to 198 miles per hour. Unofficially, and with some help from Mother Nature, it'll crack 200—both figures are wall-licking, padded-cell-level crazy, considering how few places in North America allow drivers to hit that kind of speed.

Unsurprisingly, Chevy's claims in other metrics are impressive, too. The ZL1 will hit 60 in just 3.5 seconds, a stat that 10 years ago was reserved for only the most potent Italian and German supercars, and the fastest of the Camaros will leave the factory capable of running the quarter mile in just 11.4 seconds at 127 mph.

On the road, this power is as frightening as its numbers suggest, but it's a different kind of frightening than, say, cars that rhyme with “Bodge Hallenger Smellcat.”

While Dodge uses 275-millimeter wide Pirelli P Zeros on the Challenger Hellcat's back axle, Chevy took a much more dramatic approach, reaching out to Goodyear to design an Eagle F1 Supercar tire with a compound and construction specific to the ZL1. And just for good measure, these stickier tires are over a full inch wider than the 10.8-inch rears on the Hellcat. Paired with the Corvette Z06's Performance Traction Management and a launch control system, the Camaro feels surefooted despite its ludicrous power.

It's still scary fast, but unlike a Hellcat, the power is easier to manage under wide-open throttle. Hit the gas pedal in the ZL1 and several things happen very suddenly—the Camaro squats on its rear haunches, the rear tires might squirm a little, and then you're flying towards the horizon, accompanied by the bellow of the exhaust and the whine of the supercharger/passengers. While the public roads I drove the ZL1 on didn't allow safe testing of Chevy's 0-60 claim, several aggressive runs off the line left me thinking the we should take GM's claims very seriously.

But while the initial acceleration is relatively easy to manage, the Camaro's impressive legs make it a handful in more relaxed driving conditions. For my 500-mile drive with the ZL1, I covered that distance in a single day which meant relying on interstate highways. To paraphrase Dr. Alan Grant in "Jurassic Park," the ZL1 doesn't want to do 70, it wants to go fast.

Skipping the use of cruise control, which is blasphemy in a high-performance car anyway, I attempted to first keep the speed steady at 75 to 80 mph. This, I thought, was fast enough to satisfy the 6.2-liter's appetite for road, but not so speedy that some home-spun southern sheriff would invite me to a road-side chat.

While the roads between Charlotte and Daytona Beach were blissfully clear of the law, the beast under the Camaro's carbon fiber-scooped hood was happier running at 85 to 90 mph than 75. The speed crept up steadily, so that every few minutes I'd have to back off the gas and bring the speedo back to the reasonable range.

But the performance is even more dramatic when passing, when the speeds climb even faster. By the program's lunch stop, I realized my right foot wasn't disciplined enough to maintain speed, and switched to cruise control, blasphemy be damned.

Not your typical 10-speed

This is, of course, high praise for the ZL1's standard adaptive suspension. This Camaro does 90 the way most cars do 65, and it's because of GM's work on the magnetic dampers and in the wind tunnel. Be it on freeways or country lanes, the ZL1's suspension does a great job of smoothing out the road and tracking straight and true. Paired with super-supportive Recaro-branded seats, the ZL1 gobbled up the 500-mile drive far easier than expected.

It's not quiet, though. There's some engine drone, but the bigger issue is tire noise. While the ZL1's suspension smothered Interstate 95's bumps and imperfections, the wide, sticky Goodyears transmitted every little sound into the cabin. My back survived the ZL1, but my ears are still recovering.

While I started my day with a manual-transmission convertible, the mandated lunch break in scenic Beaufort, South Carolina gave me the chance to snag an auto-equipped coupe. Not only did the coupe help keep the southern sun from burning my precious, little neck, it gave me the chance to check out GM's new 10-speed automatic.

A rare act of cooperation between the General and arch-rival Ford, the new 10-speed made a name for itself first in the F-150 Raptor and will join the rest of the light-duty F-Series lineup, as well as the Mustang, later this year. The Camaro is the first GM vehicle to get the impressive new transmission.

Before you ask, no, going to the two-pedal arrangement doesn't just sate the 6.2-liter V-8's appetite for speed—if anything, the auto feels faster. Despite four extra gears, the new GM/Ford collaboration is far quicker at swapping cogs than a human, delivering upshifts that are smooth and remarkably like a double-clutch in speed, whether in full auto or manual mode. While using the 10-speed's manual mode does up the involvement, the transmission is best left to its own devices, because the clever computers do a good job picking the right gear for the occasion.

Complaints? Manual-mode downshifts could be quicker. The transmission also didn't feel too willing to lose multiple cogs at a time in manual mode. I wish there was a more drama to the upshifts, too–a Jaguar F-Type or Porsche 911 barks and snorts with every wide-open-throttle upshift in manual mode. The only thing that happens in the ZL1 is a near-seamless change in tone as the engine speed drops.

This is the point I'd normally start talking about the brakes, steering, and handling, but I can't. Highways and gently curving rural roads dominated this program out of necessity—when you're trying to cover 500 miles in a single day, backcountry twisties with a 35-mph limit are a luxury you can't afford. Because of that, I simply don't feel comfortable commenting on the ZL1's other systems. Look for a more detailed review soon.

Instead, we're going to look at the high-speed ZL1 against a more mainstream vehicle. See, aside from road-tripping with Chevrolet and attending the Daytona 500 festivities, this trip to the Sunshine State gave me a chance to catch up with my grandparents, two former Michiganders who have done like many of their peers and fled to the heat, humidity, and unlimited golf of The Villages, a retirement mecca about an hour north of Orlando.

Planning for the detour earlier in the month, I'd booked myself what Enterprise Rent-A-Car helpfully calls a "Convertible Car" rental after seeing the promise of “FORD MUSTANG OR SIMILAR.” While I expected a boring V-6 model and hoped for an Ecoboost, I was delighted to arrive at the local branch and find a Ruby Red 2016 Mustang GT Convertible with a mere 275 miles on the clock reserved for me. After the shock of scoring a virtually new, $46,000 rental vehicle wore off, I set off on a journey to Florida's retirement capital that not only gave me a new appreciation for Floridian roads and scenery, but reminded me that 435 ponies are closer to the ideal than 650.

Driving the 90 miles from Daytona Beach to The Villages takes about two hours, because there's no direct freeway route between the two cities. Instead, I helmed the Mustang along a rural stretch that included a charming two-lane road through the Ocala National Forest.

Palms, cypress, pines, and countless other varieties of flora lined the gently winding, lightly trafficked road, and with the sun shining and the roof down, I exercised the Mustang with a verve my self-preservation instincts wouldn't allow in the ZL1. The 435-hp 5.0-liter V-8 wasn't as sonorous or exciting to listen to, its acceleration was also more relaxed, and compared to the ZL1's impressive 10-speed automatic, Ford's aging 6-speed auto felt slow and antiquated. But the overarching performance wasn't as intimidating as the 650-hp ZL1. I could get aggressive with the Mustang's gas pedal in a way that the Camaro wouldn't tolerate, and for that reason I wore a far bigger smile after my drive in the Ford than I did after the far lengthier drive in the ZL1.

This is not me saying that the least-enthusiastic Mustang GT is somehow better than the most powerful Chevrolet Camaro to leave the factory, so much as it is an acknowledgment that the ZL1's performance envelope is too high for this particular mortal to freely enjoy. I'd be singing the same tune here whether Enterprise gave me a Camaro SS or everyone's favorite fat kid, a Dodge Challenger. The bottom line is that for the vast majority of drivers, approachable performance is always going to be more enjoyable than stunning statistics, and that's the case here.

The ZL1 is such a serious performer, such an impressive piece of engineering, that it's hard to enjoy or appreciate outside the unrestricted confines of a race track or drag strip. If that's an environment you regularly find yourself in, then pick up a ZL1—it's a hell of a car. But if you're doing virtually anything else, be it commuting, attacking the occasional twisty road, looking for a weekend toy, or simply trying to avoid routine police encounters while enjoying the roar of a V-8, a less powerful Camaro SS will satisfy more often and more immediately than this 650-hp monster. Of course, if you're at the other end of the spectrum and find even the ZL1 to be too soft, Chevy has just added an even more hardcore ZL1 1LE.