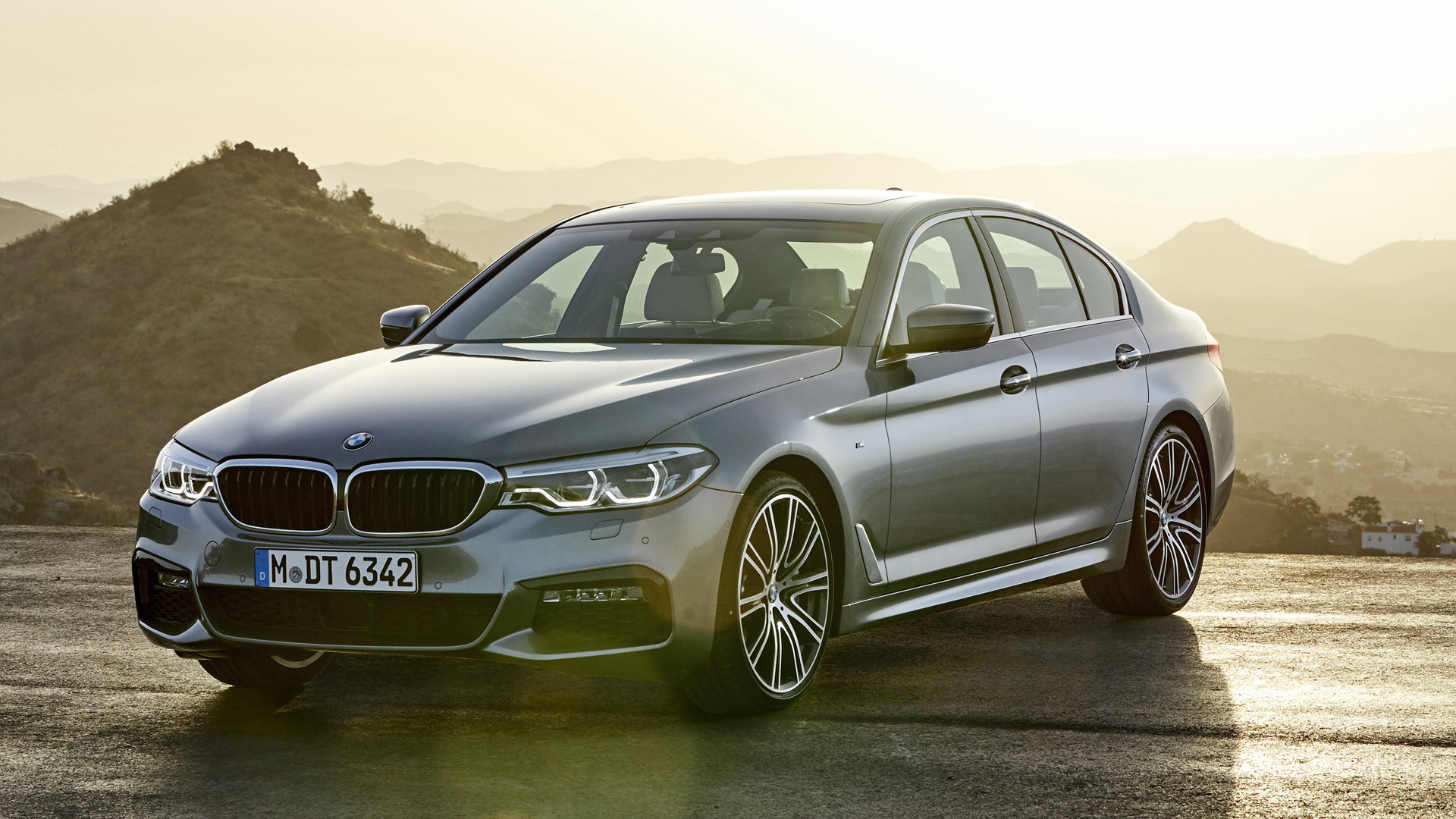 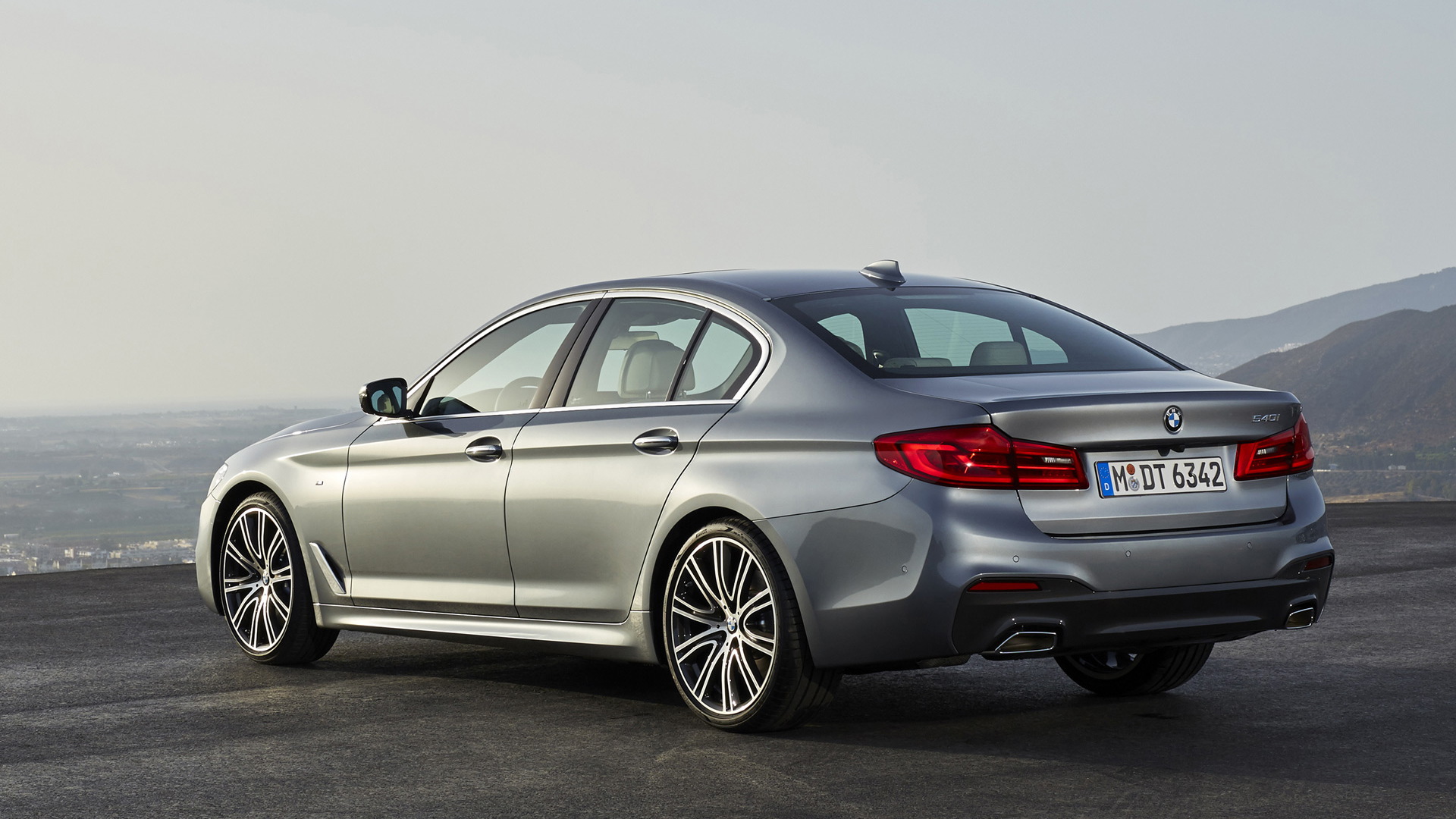 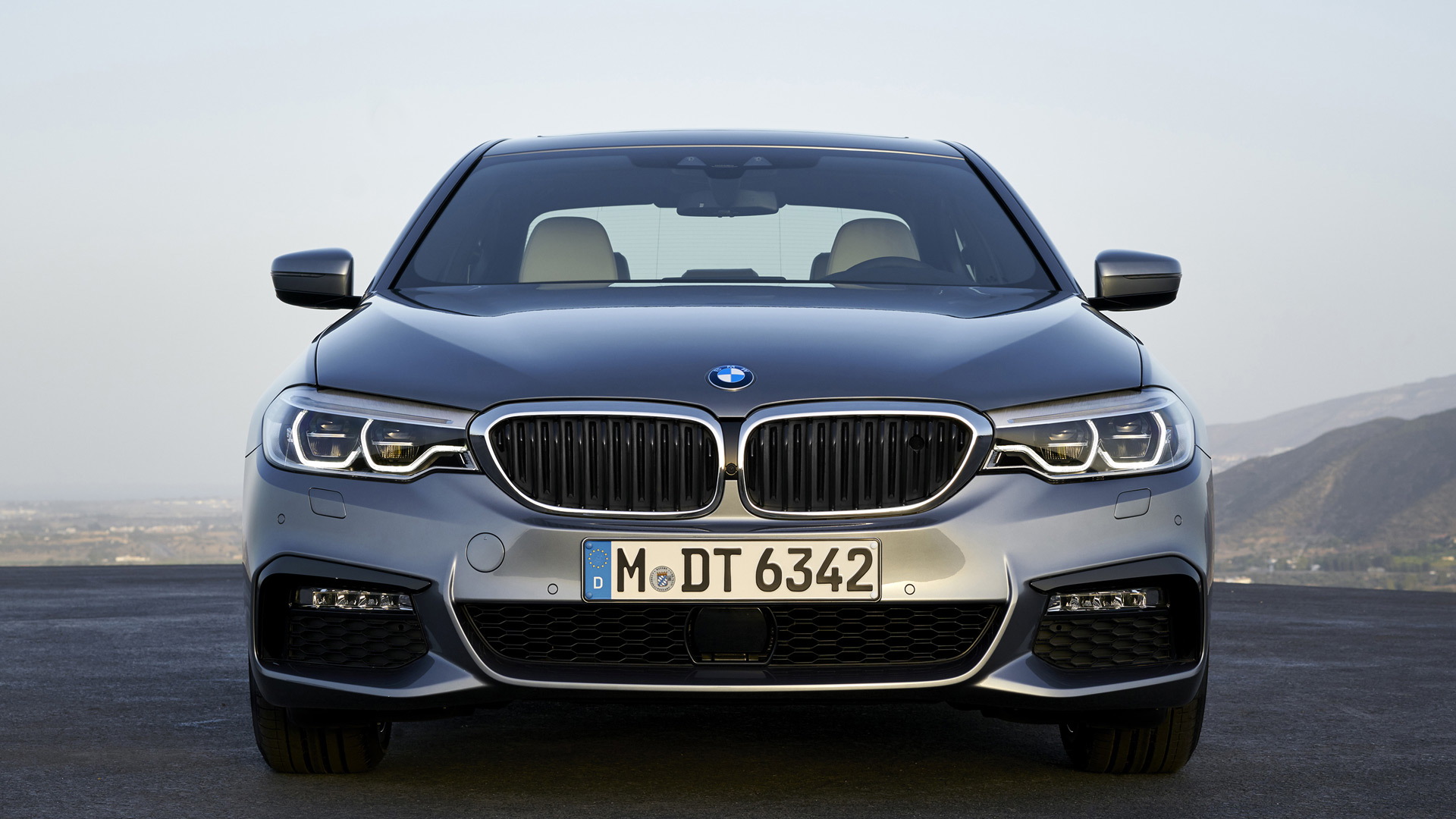 Iterations of the 5er have had their moments, but it’s always worn hand-me-downs from the 7-Series and, quite frankly, we would’ve rather played with the 3-Series on a Saturday afternoon.

You can imagine how hard this 2017 BMW 5-Series will need to shout to get attention.

Its first task will be to convince mid-size luxury buyers that it’s up to the high (tech) expectations of others.

The new Mercedes-Benz E-Class and Volvo S90 are technological warships, banks of self-driving tech and touchscreens wrapped around an engine and four wheels—five if you count the steering wheel, for now.

For that nerd duty, the BMW 5-Series comes to the table armed to the teeth. 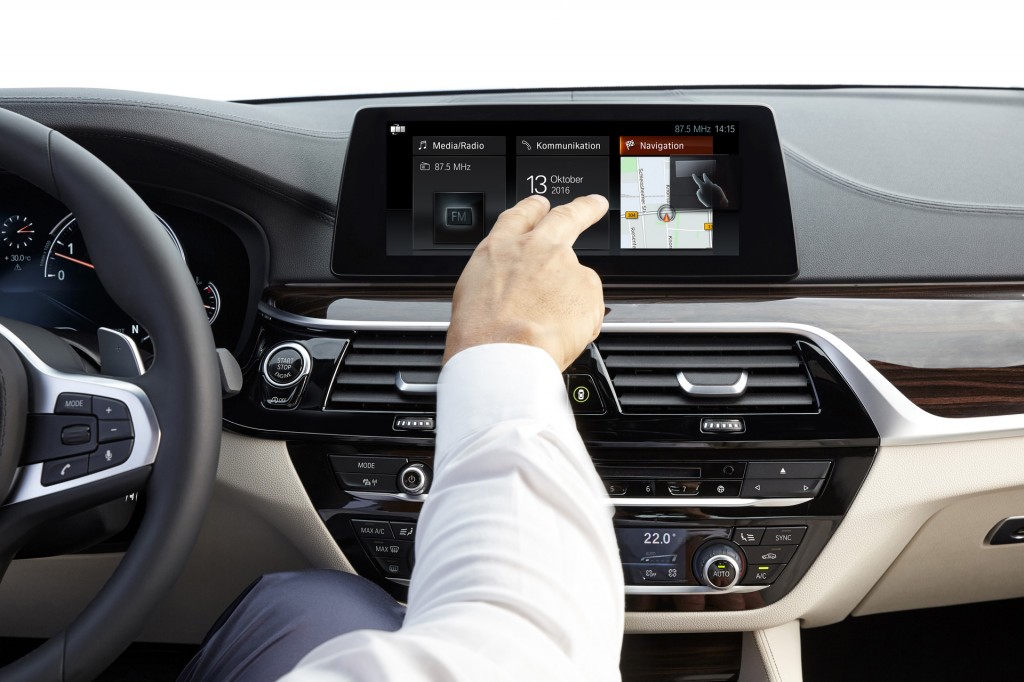 The 5-Series’ infotainment system features no fewer than five different methods for input, including touchscreen, voice control, rotary knob, touch input, and Gesture Control, which was borrowed from the 7-Series. The team of sensors in the latter watch for fingers to change radio stations, turn up the volume, or skip tracks by waving, wagging, dragging or winding fingers near the touchscreen.

(It’s normal for people give me crazy looks while I’m seemingly shouting at the windshield while talking on a Bluetooth-connected phone. The looks while I’m apparently waving home a runner from third for no real reason pale in comparison.)

CHECK OUT: BMW M2 vs. Ford Focus RS: Have turbos, will travel

Far more useful is the 10.2-inch touchscreen buried into the dash that displays navigation, media, car settings, and Apple CarPlay, if connected. BMW’s capitulation that its iDrive touchpuck needs additional help makes a world of difference, and the touchscreen is sharp, responsive, and the only way to run Apple CarPlay—Audi, we’re looking at you. Coincidentally, the 5-Series also is one of the first cars to run CarPlay wirelessly, which sets it apart from other systems in ease of use. However, BMW doesn’t let the interface use all the screen’s real estate; there’s dead screen space to the right.

Beyond what’s at hand, the 5-Series upgraded its head-up display to be 75 percent larger than the last version; apps are integrated into the infotainment system far better than any other automaker’s efforts so far; and active lane control will keep the 5er in line for more than 30 seconds hands off (closer to 45 seconds, really) before chiding you back into attention.

Despite all that, we’d prefer that you drive the 5er instead.

Looks that can chill

BMW isn’t wasting time showing its hand early with the new 5-Series. Launch models such as the 530i and 540i won’t wait long for company. Two months after the 2017 models go on sale, they’ll be joined by a plug-in hybrid 530e iPerformance model and a M550i xDrive—complete with a V-8—as 2018 models.

All models ride on a modified skeleton borrowed from the 7-Series. That flagship sedan provided many of the weight savings and more efficient tools for the 5-Series, but none of the carbon fiber. 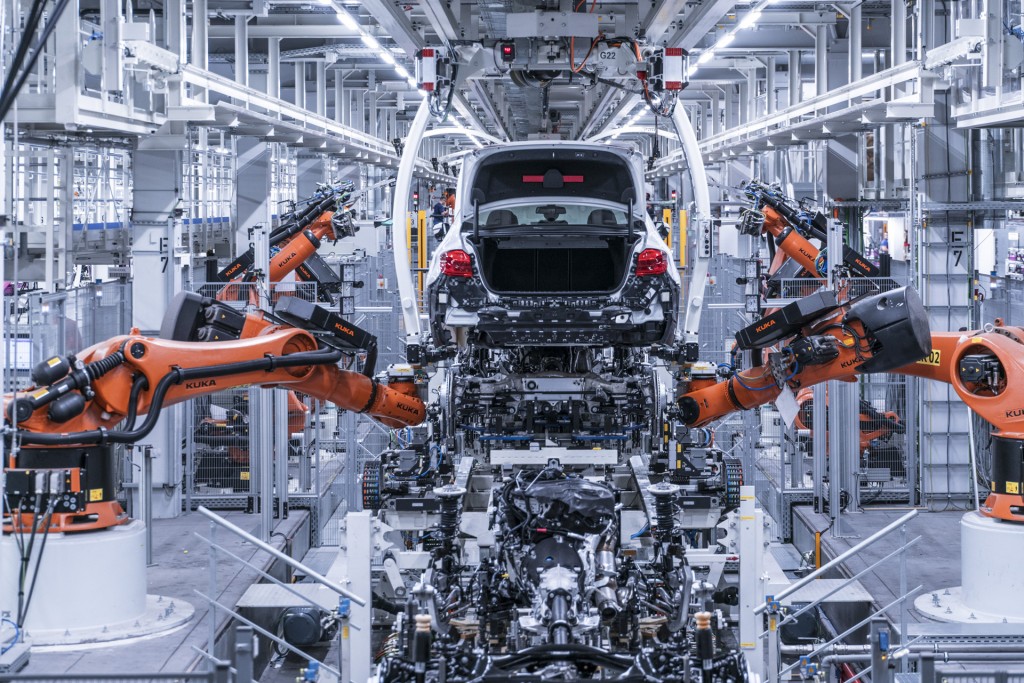 Like the “Star Wars” movie franchise, the middle of the 5-Series hasn’t changed much for a decade or so—but the beginning and end are what we’ll be talking about for a while.

Up front, the taller nose and pronounced grille are more recognizable this time around. Bigger kidney grilles and standard adaptive headlights won’t generate much buzz on their own, but as part of the larger package of 5-Series improvements, they're much more welcome.

Along the sides, the 5-Series borrows much from the 7-Series, but a distinctive and sharper belt line will stay the domain of the smaller sedan. Another pinch right below the windows is the indication to BMW cognoscenti that this is the G30—not the F10.

A more expressive lower rear bumper and taffy-pulled rear taillights finish off the new 5-Series yielding a look that’s more evolutionary this time around, but still manages to smooth over the unfinished corners of the last generation.

Inside, the 5-Series is awash in sometimes-conflicting leather, piping, and stitching. Every material is soft and pliable without feeling thin or cheap. A grippy polyurethane texture around door handles and some switches is a stellar touch.

BMW has selected two approaches to transport all that leather and tech for starters.

That engine is far from anemic and sounds somewhat pleasant pushing the 5er through the hills of northern California. If anything, it lacks top-end ambition—once it’s up to highway speed, it prefers to stay there and chew up the highway miles at a steady beat.

For more animated highway sprints, the 540i packs an uprated turbocharged 3.0-liter inline-6 that makes 335 hp—up 35 hp from the last 535i—and 332 lb-ft. While the 540i badge was normally reserved for V-8s, its absence isn’t missed here; the turbo-6 spins its rears up just fine without additional cylinders and makes passing maneuvers faster than a creepy uncle. 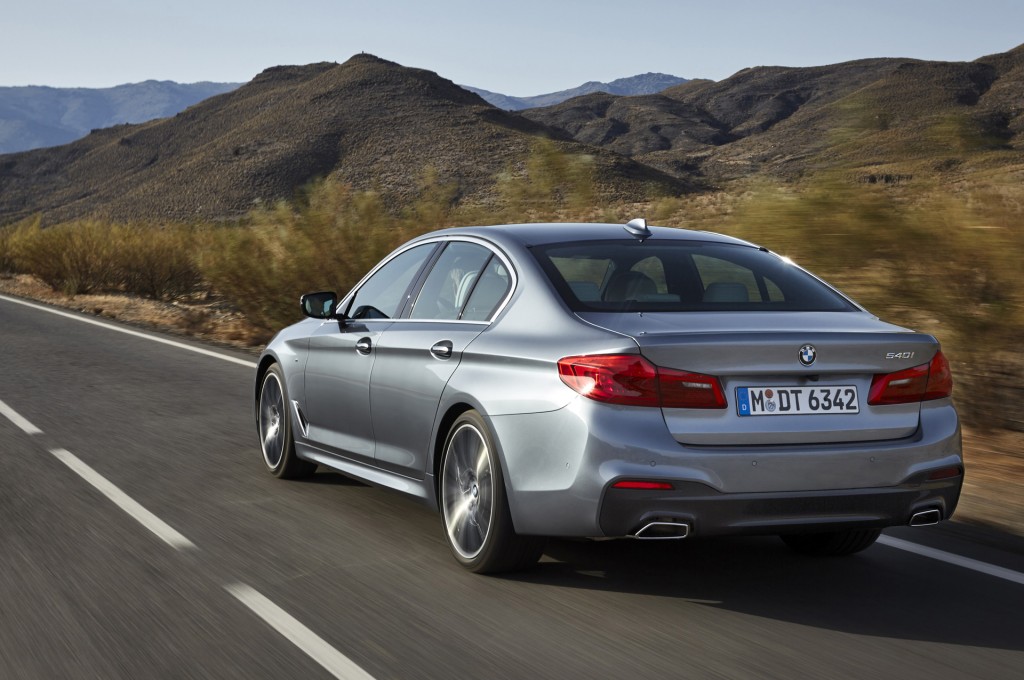 Both engines are teamed to an 8-speed automatic transmission that’s smooth on the way up, and crisp on the way down with a blip of throttle in sport modes. Pull back on the column-mounted shifters to pick your own, if you like, but it’s not the best way: the logic in the 8-speed can keep up with any side road hustle just fine, provided you're in one of those sport modes.

All-wheel drive (which BMW calls xDrive) is available for both models and for the first time can be paired with adaptive dampers or rear-wheel steering, which BMW calls Integral Active Steering.

Two words on IAS: skip it—at least for now. At low speeds, the rear-wheel steering can aid in maneuverability around town, but at higher speeds it can feel like an unnaturally quick grocery cart ripping around the frozen pizza aisle. Sharper turn in may sound more appealing, but the overall sensation of having your back end do something that your front end may not be expecting is probably how my 2-year-old dog feels turning the corner in my kitchen at full speed.

Rather, the base suspension setup—and the adjustable dampers—are plenty to make the 5er feel fun on twisty roads. Even with a light steering feel in the middle and a softer tune for 18-inch standard run flats, the BMW’s wheel builds up around corners nicely and holds a line. Although the weight loss may seem marginal, the new 2017 BMW 5-Series feels more athletic than the outgoing model, and more excited to hustle around side roads.

Its identity now may be more of a tech sedan than a sports sedan. On the tech front, the new BMW feels a half-step behind others in what you can see (what you can't, namely app integration is another story.) On the performance front, the BMW may be a half step ahead once more potent versions arrive later this year.

But like any good middle child knows: it has dirt on both sides and can play both siblings from the middle.