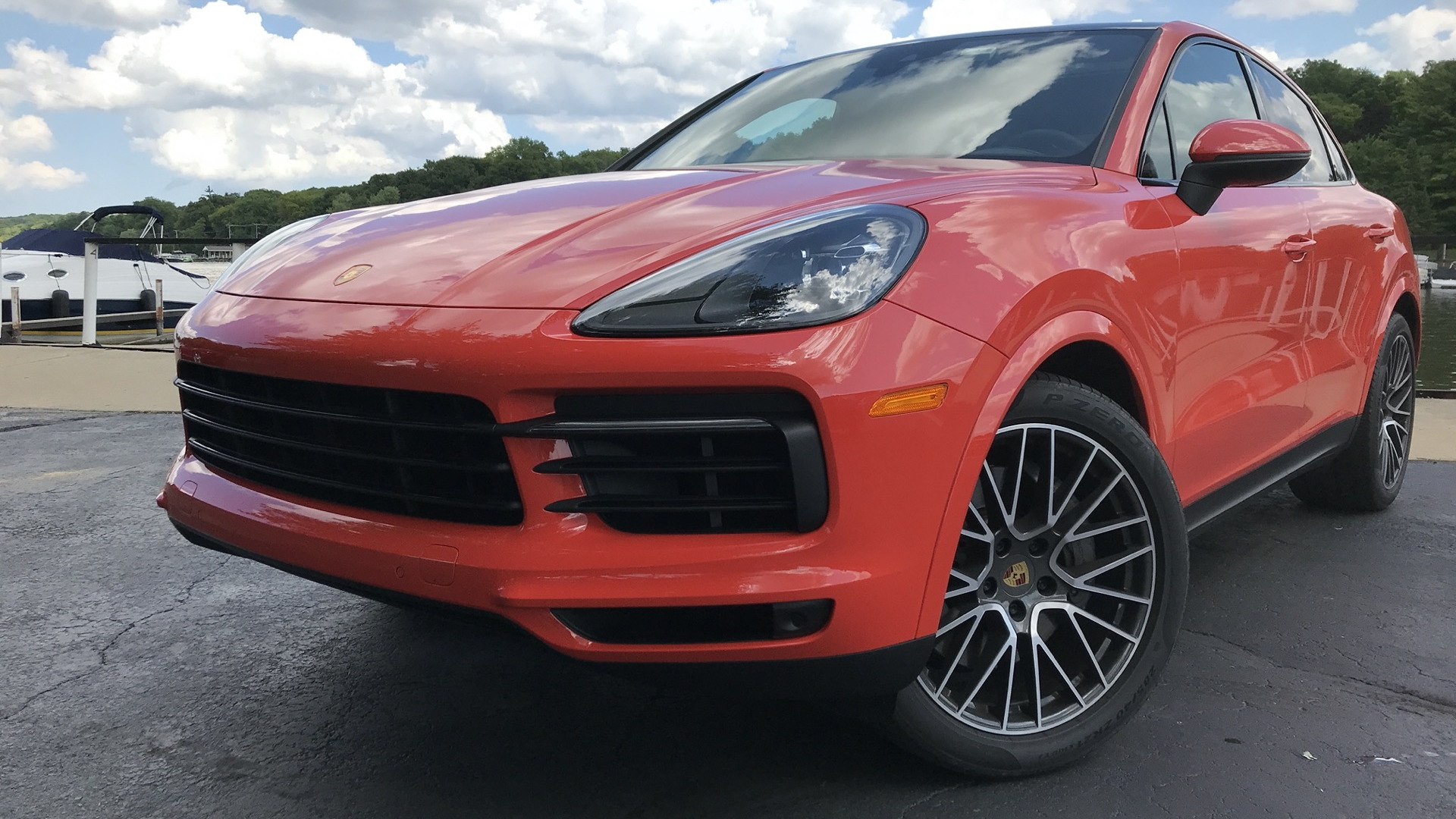 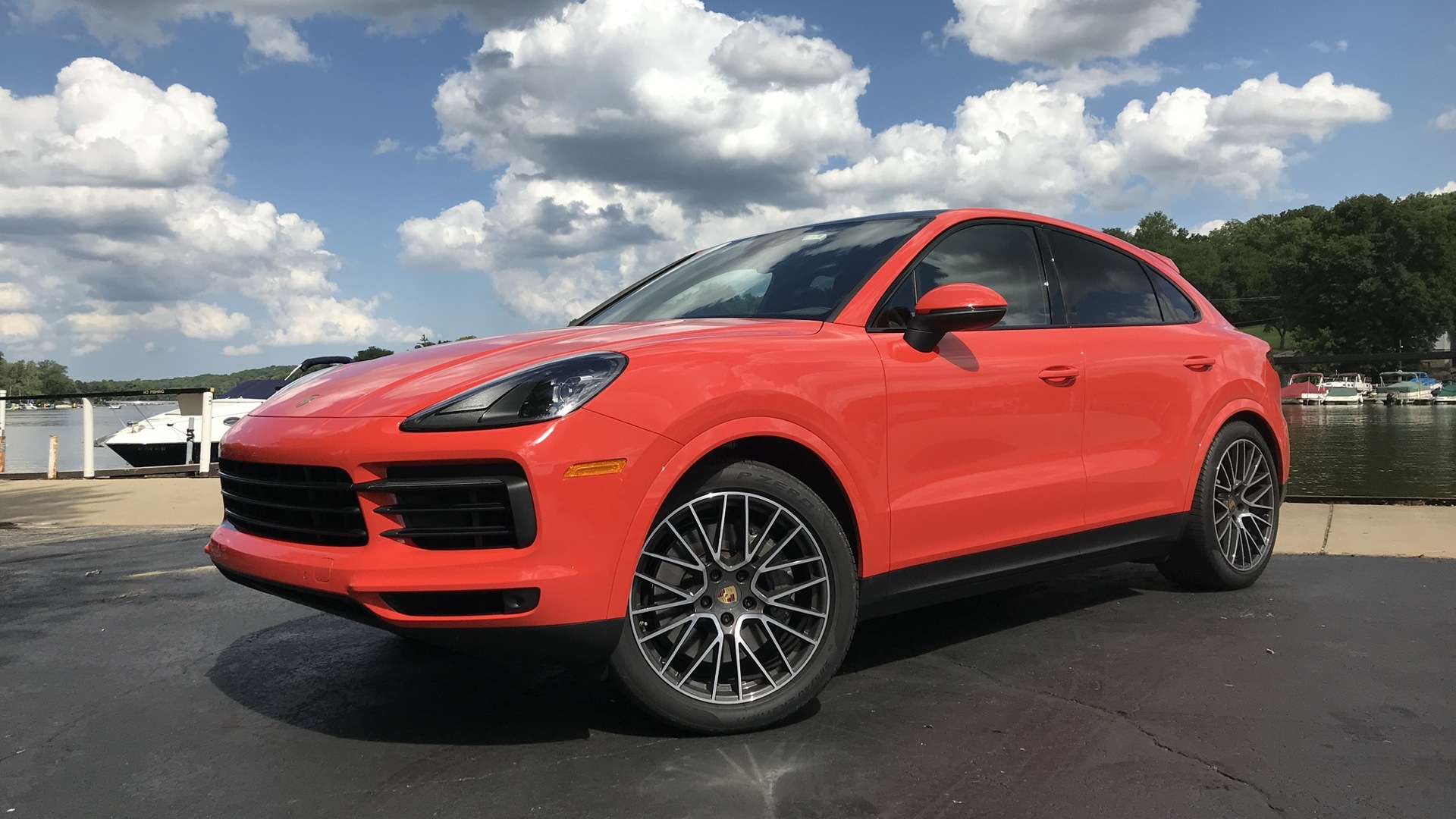 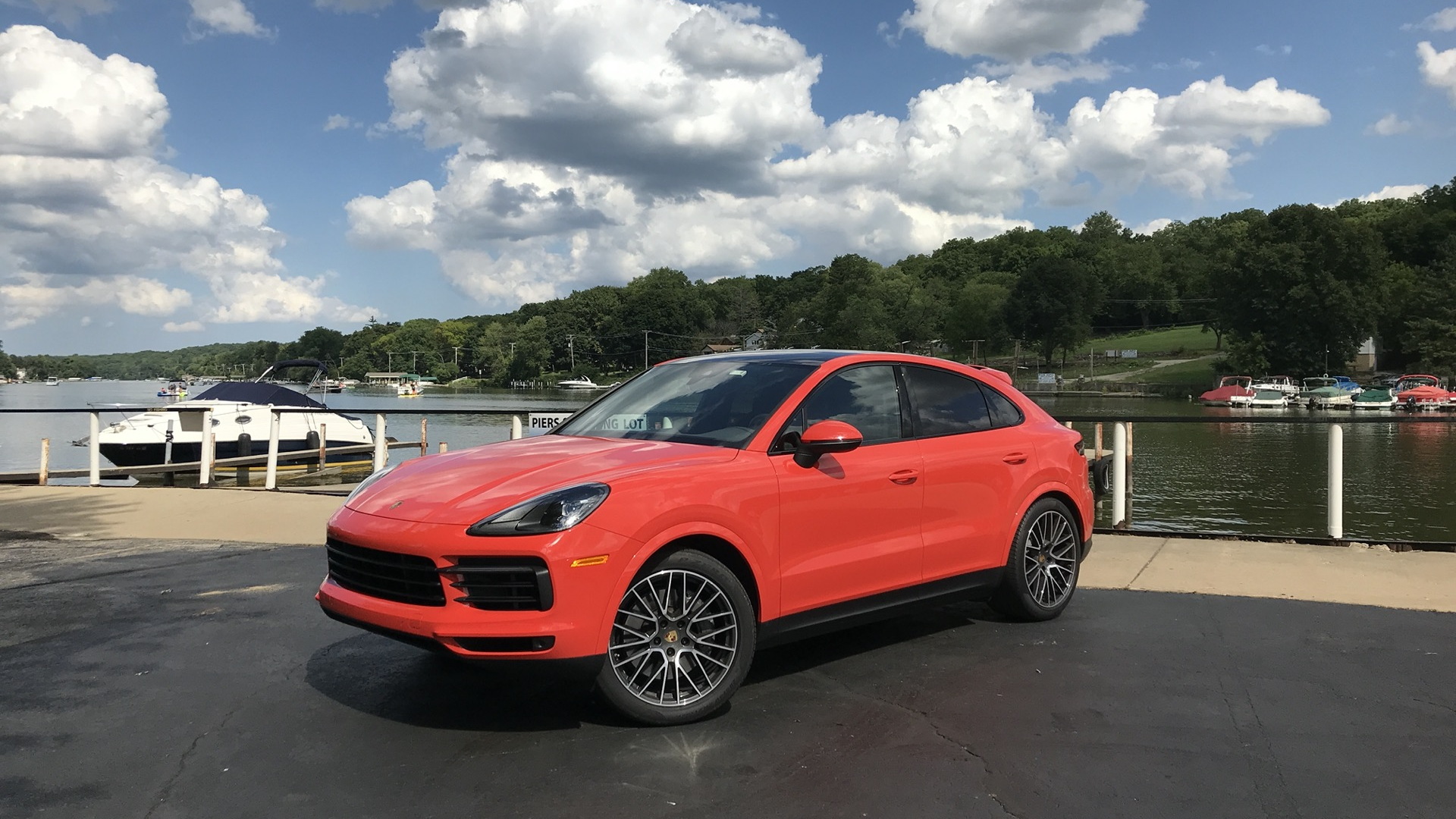 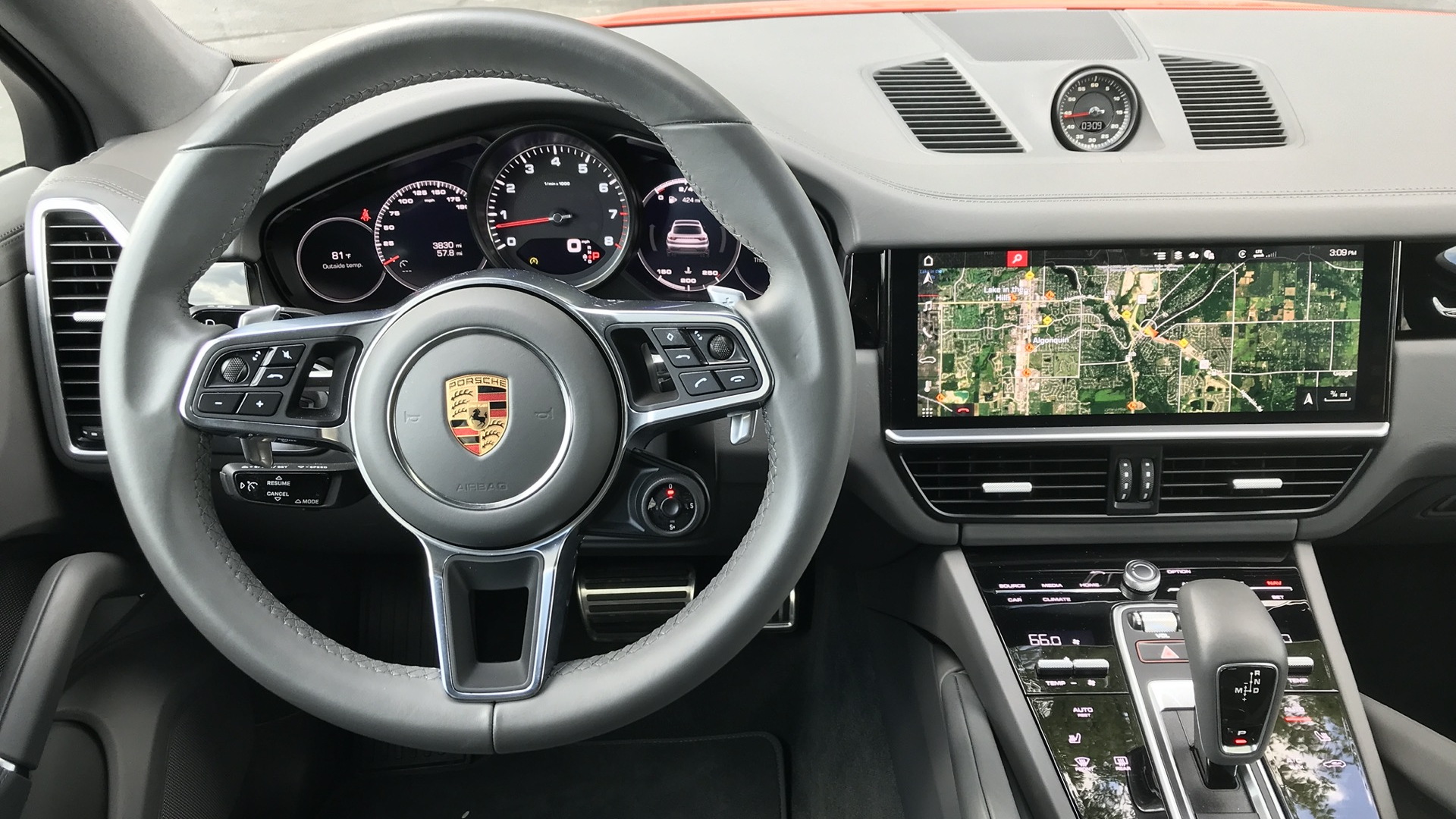 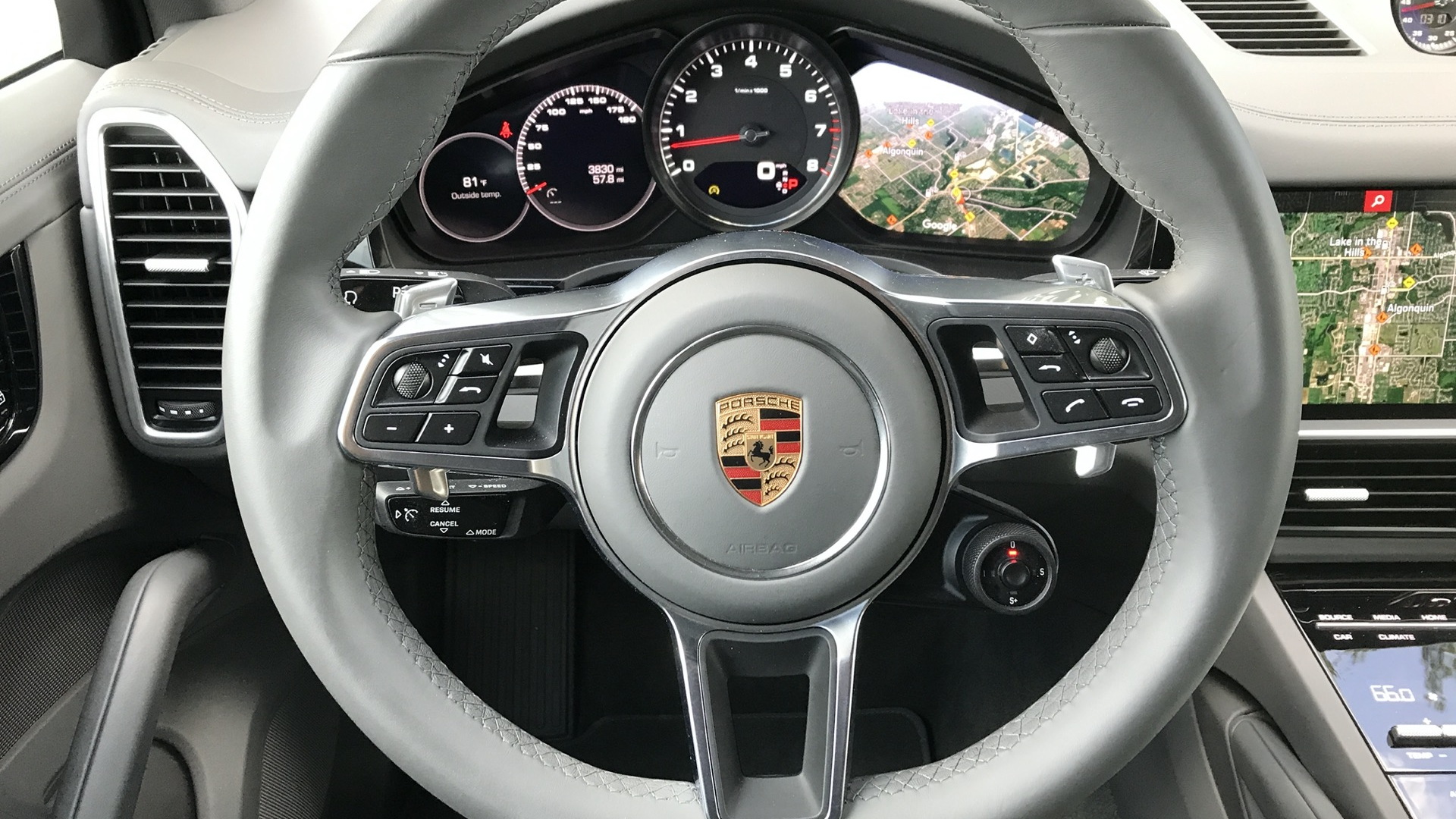 The launch of the 2020 Porsche Cayenne Coupe last year aroused more suspicion than excitement: Another four-door luxury crossover coupe; another pricey Porsche variant with an underwhelming base model and a bonkers Turbo that would easily eclipse $150,000.

Those suspicions were put to rest for me with a week behind the wheel in a mid-grade Cayenne Coupe S. Porsche is not just following the other luxury brands, it’s carving a distinct corner with its coupe-like crossover.

However, it’s not all perfect. Here’s where the 2020 Porsche Cayenne Coupe S hits and misses.

Most luxury crossover coupes look like turtle shells bound to roller skates. Ugly. Not so with the 2020 Porsche Cayenne Coupe. It’s lower, wider, and sportier than the Cayenne, and looks more like a cross between a 911 and an SUV than a turtle and a skate. The integrated rear roof spoiler and adaptive lower spoiler that rises  at speeds above 56 mph give it wings. The rear arcs down like a fastback, or, a Panamera. It trims 5.0 cubic feet of cargo room from the standard Cayenne, but most of that is in the upper corners. Multiple sets of golf clubs fit just fine.

The good looks of the Cayenne Coupe come at the expense of rear seat passengers. Unlike most competitors that seat five, the Porsche Cayenne Coupe S only seats four. Realistically, that’s not a big problem—how many adults is BMW squeezing into the X6? It’ll fit maybe three tweens at best. But two adults fit better in the X6 than in the Cayenne Coupe S. The Porsche’s low, arcing roofline trims head room to make 6-footers squeeze in, especially with the panoramic glass roof.

The tester came in Lava Orange. In the sun, it looked spicy like Cholula hot sauce. At night it was more subdued, more of a pale red than a fiery orange. It provoked eyeballs in the daylight, and drew admiration in the evening. But it costs an extra $3,150.

It’s not just the paint that is expensive at Porsche. Between base and performance models, the 2020 Cayenne Coupe costs $5,000-$15,000 more than the BMW X6 and Mercedes-AMG GLE Coupe. In the middle, the $90,000 Coupe S squares off with the 2020 BMW X6 M50i. The BMW costs less than $87,000 but is better equipped with a larger engine that hits 60 mph in 4.1 seconds, compared to 4.7 seconds for the Coupe S. The advantage of the Coupe S is better handling, thanks in part to the adaptive air suspension and active sway bars, which are extras that add about $6,000. Choosing those options makes it about $9,000 more than a quicker, better-equipped X6 M50i.

That handling, though. Even though the X6 M50i’s 523-hp 4.4-liter turbo V-8 drubs the 434-hp twin-turbo V-6 Cayenne Coupe S off the line, I’d take the Porsche on a racetrack. Porsche calls those active sway bars Porsche Dynamic Chassis Control  and they do a great job of reducing the body roll endemic to crossover SUVs. Available on the 911 and Panamera, it offsets inertia to stabilize the Cayenne in turns for quicker, steadier cornering. A graphic on the instrument cluster shows the rear of the vehicle with arrows pointing to the front; turn hard right, and the left arrow fills depending on how hard you take the turn. The power air suspension also helps by lowering the Cayenne in Sport+ mode. It offers sport sedan-type agility, and it’s much more athletic than the X6 M50i.

Normally, the 8-speed automatic that routes power to all four wheels outperforms the driver. Quick shifts complement four different drive modes that hold gears longer in Sport and Sport+ modes. The sixth gear is meant for top speed, while seventh and eighth are for greater efficiency while cruising. Rev matching smooths the downshifts for better performance, except for braking to a stop, when it’s not needed. In Sport mode, the transmission can stay in second gear nearly down to a stop, but it blips into first before the stop and that causes the Coupe to lurch. It’s not smooth. Must be Porsche’s way of saying Sport mode is for performance driving. Sport also disables the automatic stop/start.. Downshifts are exceptionally smooth In Normal mode because a coast function shuts off the engine as it coasts to a stop.

In a surprise reversal from previous years, Porsche's infotainment system has improved dramatically thanks to the steering wheel controls and digitized instrument cluster with five circular displays. Porsche has done away with most of the buttons that bedazzled the center console like Liberace's smoking jacket in exchange for a 12.3-inch touchscreen. The Google maps view is brilliant, in either the cluster or the touchscreen, and the screen's ability to sense your finger and expand the menu keeps the design streamlined. Porsche provides many submenus of information, but the most relevant driving, navigation, and convenience features can be accessed with the roll of the thumb on the steering wheel controls.

The liftgate buttons are on the driver’s armrest by the power door locks. It doesn’t open when in gear, in case you accidentally hit that button while trying to lower a window. The button’s position is much more convenient than groping for it in the lower door console or on the lower dash panel near your left knee.