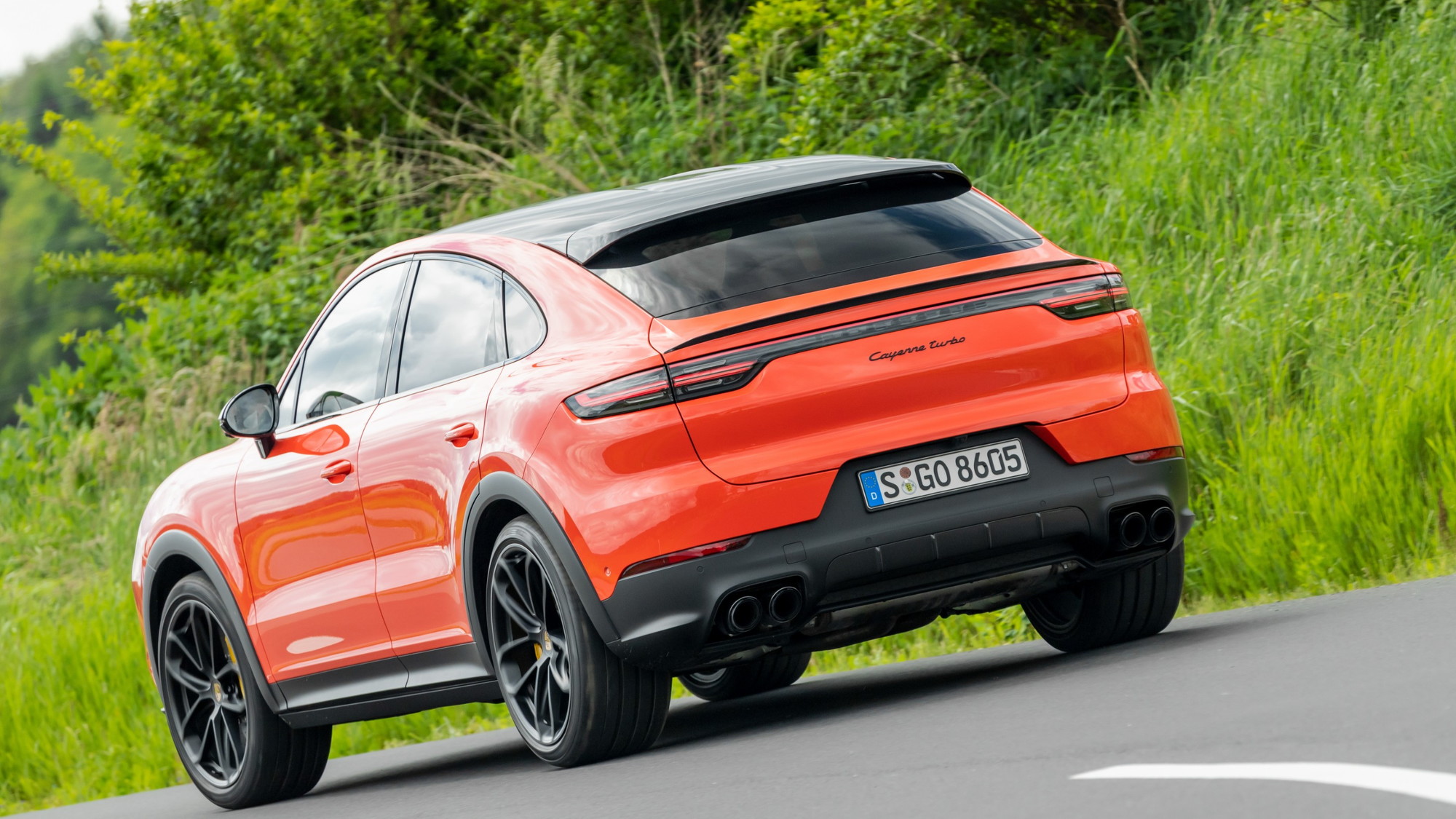 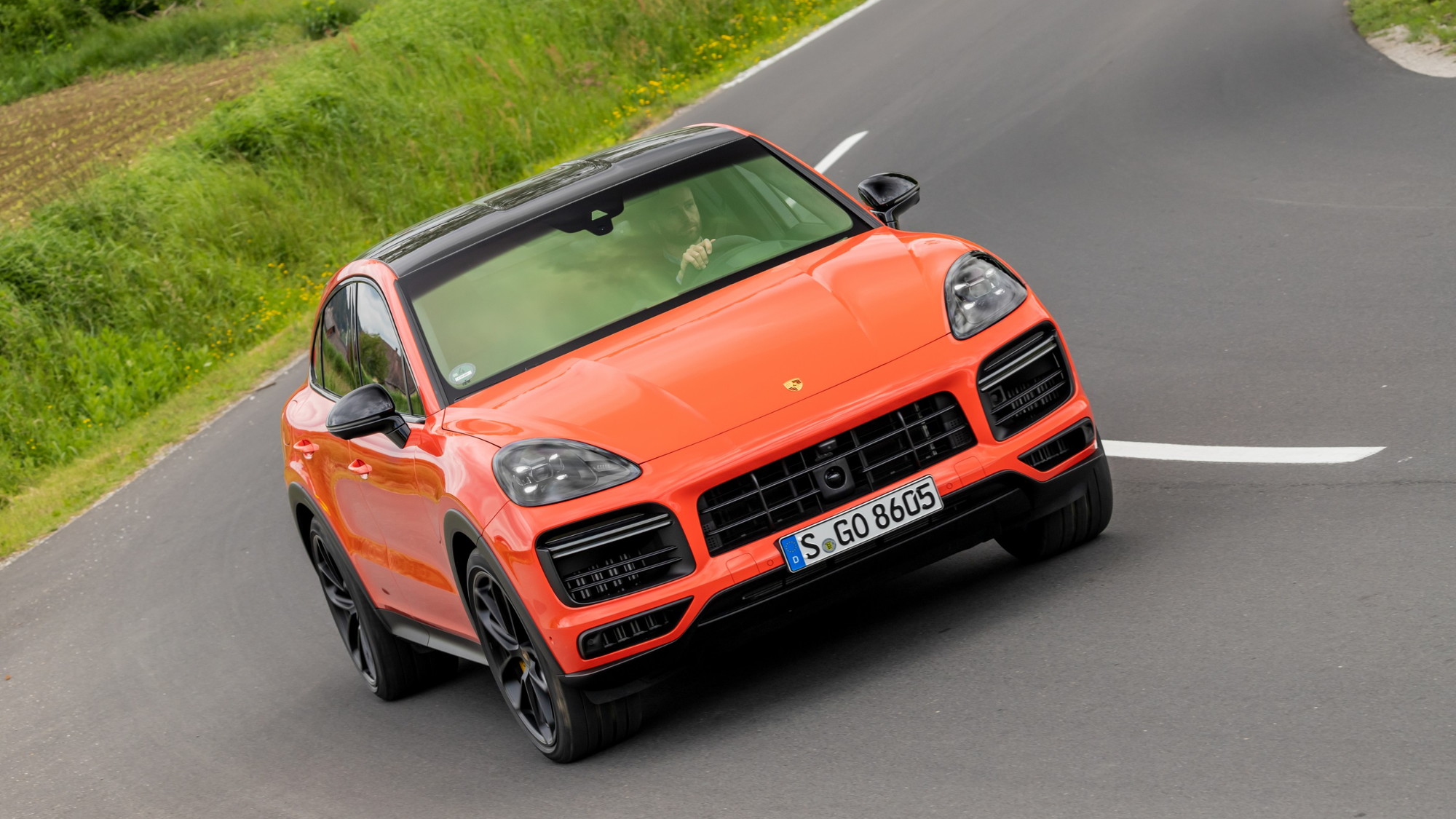 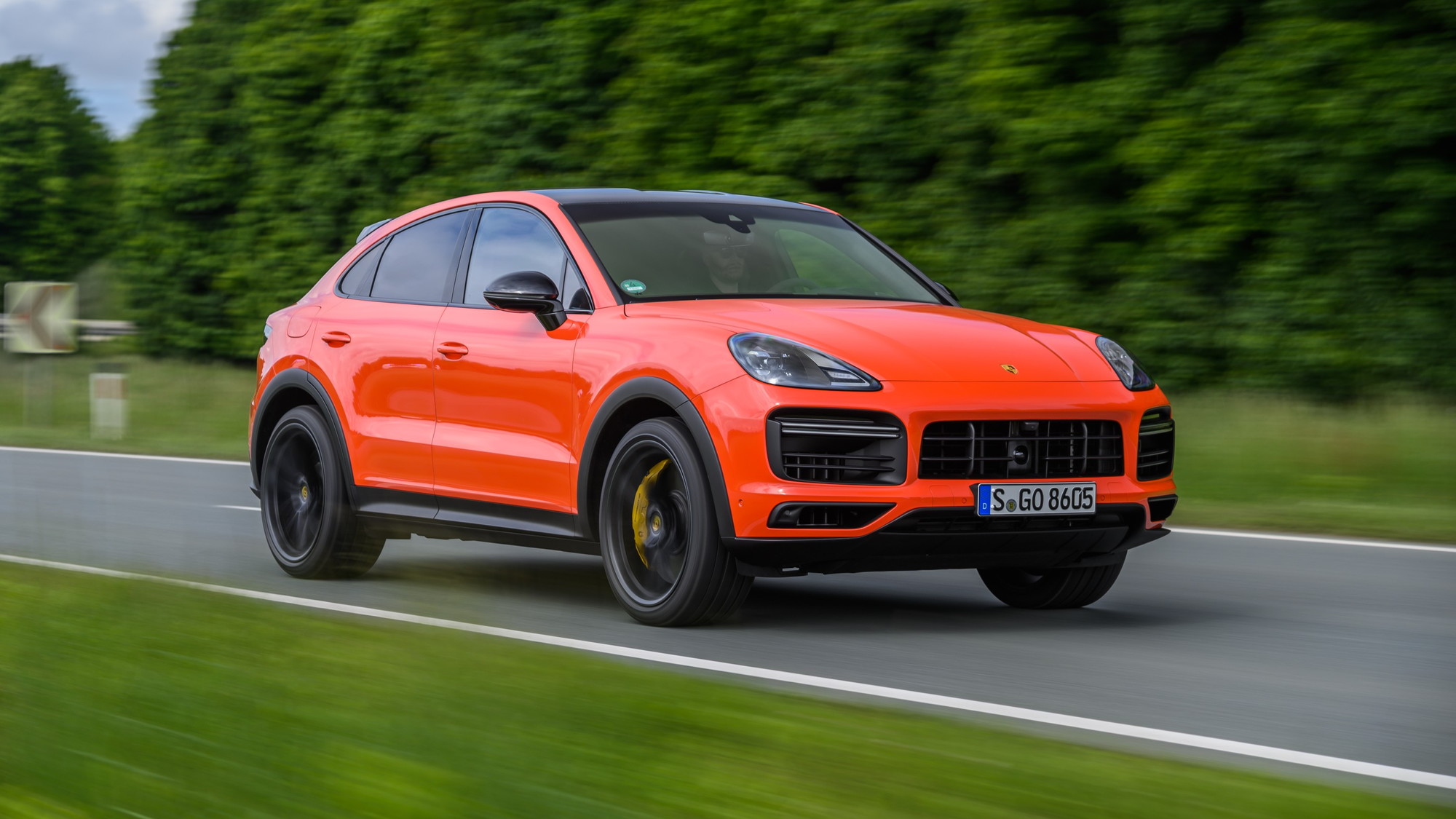 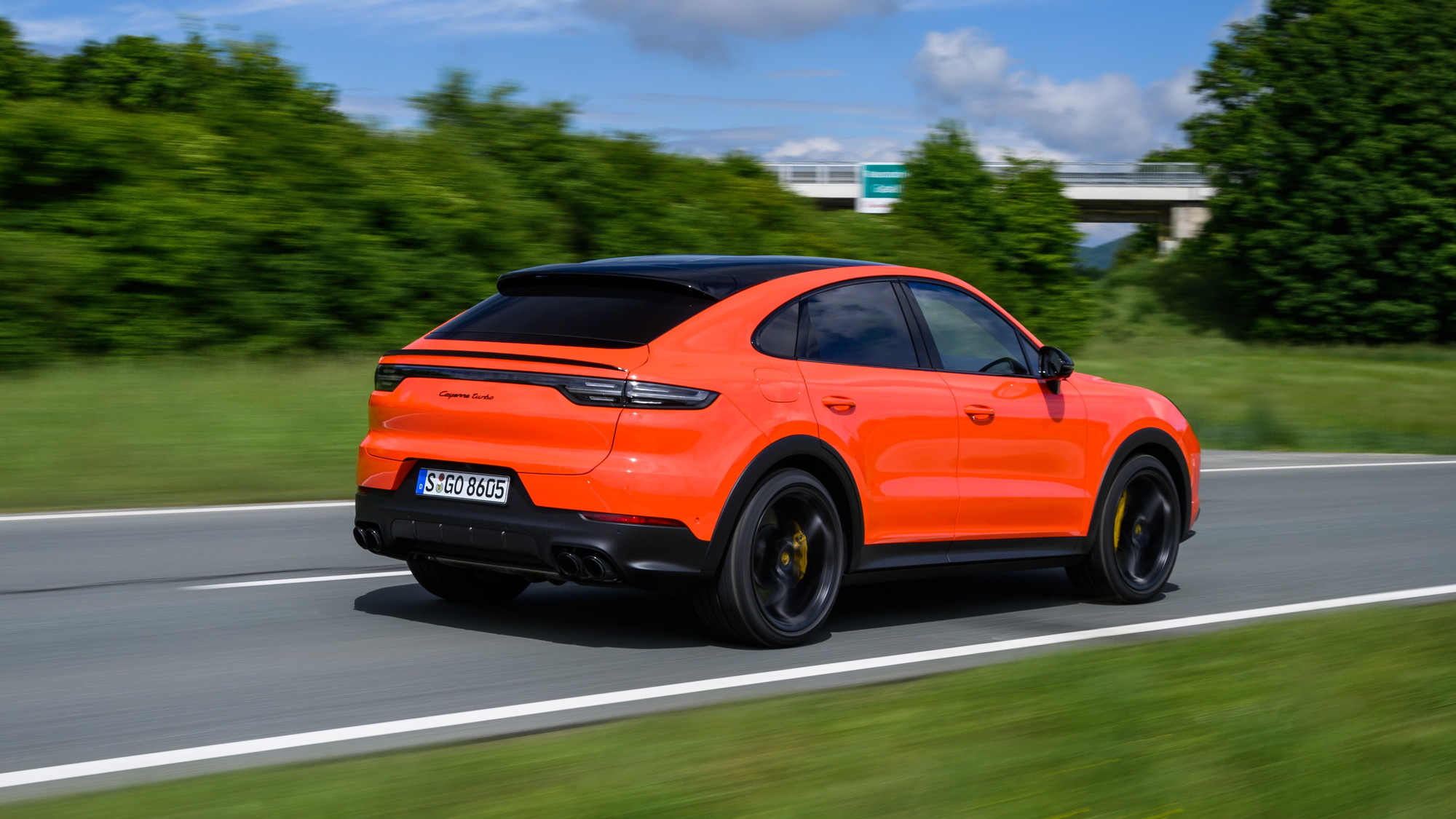 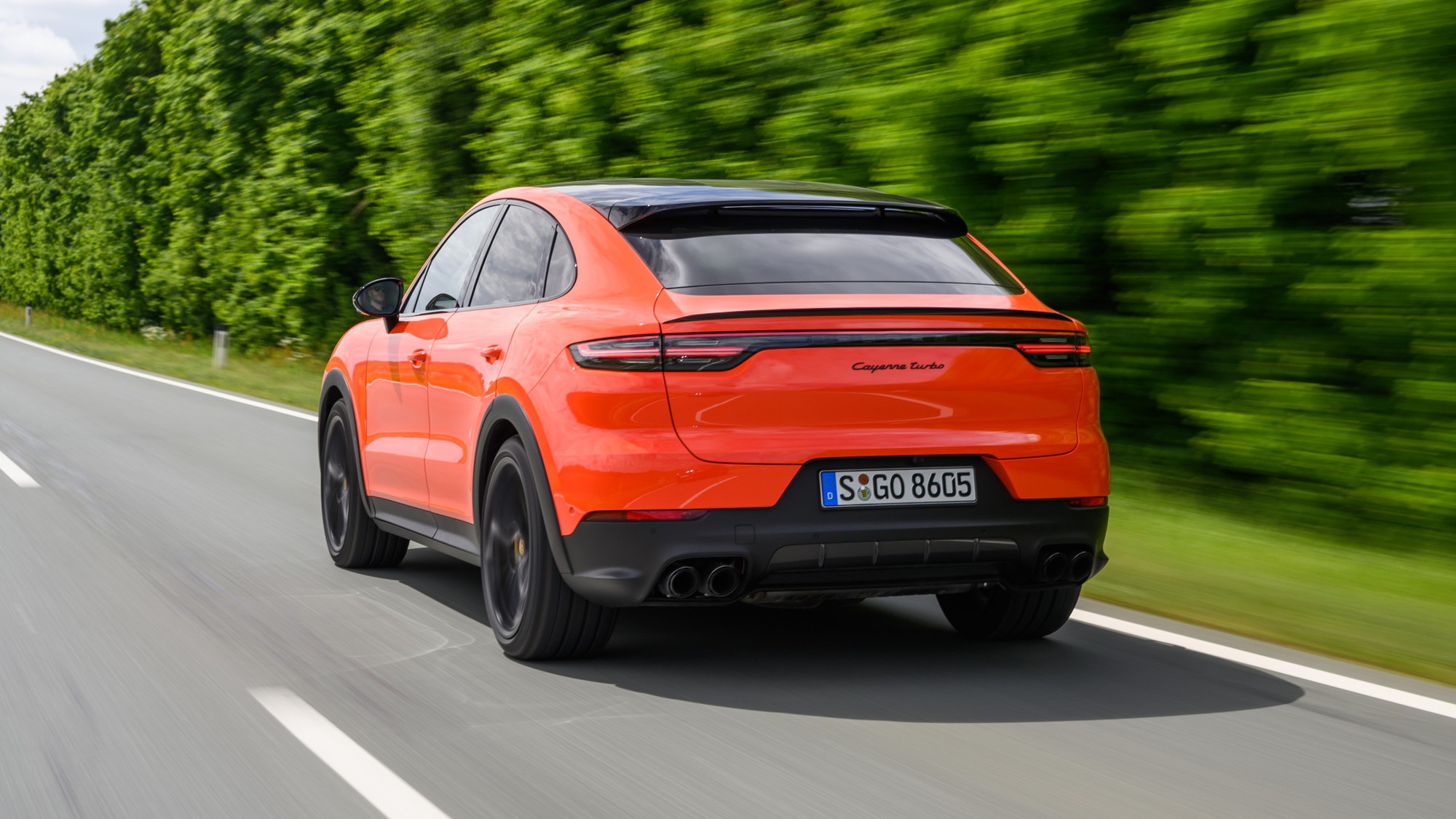 The jagged line that separates Austria and Slovenia on a map looks like it traces the sharp bends of a river, but it doesn’t. There is no physical barrier between Austria, where I shuffle a 2020 Porsche Cayenne Turbo Coupe down a foggy road early on a Sunday morning, and Slovenia, just a stone’s throw away.

I shove the throttle to the floor in this 541-horsepower, nearly 5,000-pound beast to climb a hill on an impossibly narrow road. As I crest the hill, a shabby Skoda hatchback emerges from the fog, forcing me to squeeze the brakes—tungsten-carbide discs that grab better than conventional steel and produce less dust—to avoid stuffing this prettiest of Cayennes into a ditch that may very well be the border between two nations. The twin-turbo V-8 under the Cayenne Coupe’s hood can run on four cylinders to save fuel and packs its turbochargers within the engine's V to save weight and shorten the path of the turbos' airflow, but I doubt extradition is in its repertoire. I twist the Cayenne Coupe’s drive mode dial into Sport+, the dampers tighten, the 8-speed automatic slips down two gears, and the big SUV hurtles toward the next bend as the Skoda disappears in my rearview mirror.

According to the bright 12.3-inch touchscreen housed in the dashboard, I am still in Austria, but only by a hair.

Time stood still in Slovenia until the Iron Curtain fell, but it caught up fast. Today, the two countries don’t look much different to my eyes. It wouldn’t be fair to say that the Porsche Cayenne has remained equally stagnant, and yet the new model that bowed for 2019 strayed little aesthetically from the first Cayenne that ruffled enthusiast feathers when it bowed in 2002.

For the first time in nearly two decades, Porsche has a new story to tell with its Cayenne Coupe.

The Cayenne Coupe shares its underpinnings, powertrains, and most of its shape with the standard Cayenne. The Coupe’s A-pillars are sleeker and its roof sits three-quarters of an inch closer to the ground at its highest point before sloping Panamera-like toward toward the tailgate. That tailgate dives toward the rear bumper in Porsche’s take on a style popularized by the BMW X6 more than a decade ago. The difference between the Cayenne and Cayenne Coupe is not nearly as dramatic as it is between the X5 and X6, but the Porsche is more balanced and intentional in its design.

The Cayenne Coupe comes standard with the Sport Chrono Package that includes an analog timer and the Sport+ mode that slices a tenth of a second off its 0-60 mph sprint. Power comes from a 335-hp turbocharged 3.0-liter V-6 in the base configuration, a 2.9-liter twin-turbo V-6 in the Cayenne S, and the 541-hp twin-turbo 4.0-liter V-8 tucked under the hood of my Cayenne Turbo tester. No hybrid Cayenne Coupe is on offer yet, but a lithium-ion battery will fit beneath its rear seat. Three-mode adaptive dampers come standard and do their best to tame the stiff ride provided by the optional 22-inch alloy wheels.

The base engine delivers power with creamy linearity, pouring on its 332 pound-feet of torque from just 1,340 rpm. Sixty mph arrives in a tick under 6 seconds.

It’s hard to imagine needing anything faster than the Cayenne S, which vaults to 60 mph from a stop in 4.9 seconds with the Sport Chrono Package. The Turbo's V-8 slices the 0-60 mph sprint to 3.9 seconds, but its power is harder to modulate in most situations. The 8-speed automatic transmission that’s standard across the line behaves brilliantly regardless of what engine it’s bolted to. Paddle shifters mounted behind the steering wheel let the driver determine when the transmission will fire off its rapid shifts.

Like the standard Cayenne, the Coupe excels at autobahn speeds with a docile demeanor and reasonable noise suppression. Flung into a corner, the big SUV hides its heft well, though it never feels light on its feet down these narrow Austrian roads. The electric-assist power steering is boosted at low speeds for easier parking and tightens up nicely when hustled down a winding road. Never does the electric tiller transmit tarmac like an older hydraulic or manual system, but no automaker has steering feel as dialed in as does Porsche.

The Cayenne Coupe’s wider track may enhance its high-speed stability, but I don't get the opportunity to sample one against the standard SUV. Porsche has widened the Coupe’s rear stance primarily to house hefty rubber behind its broader haunches, not to improve its handling. It’s yet another reminder that the Cayenne Coupe is a statement more than a dedicated sports car, although that line blurs more with every incarnation of Porsche’s SUV.

Squint—and keep squinting—and you might see some of Porsche’s iconic 911 in the Cayenne Coupe’s profile. The curve of the D-pillars and the wider rear haunches link the two. The roof slopes elegantly and looks best with the chrome strips that outline the crossover’s windows, though they can also be finished in black.

The broad shoulder line at the rear houses tires as big as 22 inches in diameter wrapped in 285 mm front and 315 mm rear Pirelli P-Zero rubber.

At the rear, the Coupe’s tailgate is home to an active rear spoiler that inelegantly rises to the occasion above 56 mph. It looks better when it’s flush with the sheet metal, but even then it’s topped with a narrow, black-painted lip spoiler. Right you are: Porsche put a spoiler on its spoiler.

Designers relocated the Cayenne Coupe’s license plate to its rear bumper, a solution more elegant than the rectangle hacked out of the standard car’s tailgate.

Compromised inside, but not much

Inside, passengers won’t notice much of a difference between the Cayenne and Cayenne Coupe. The sloped-roof Coupe comes standard with 8-way sport seats with big bolsters, though optional comfort seats with more adjustment and massaging backrests are more likely to find their way into U.S.-bound models. Porsche shaved the Coupe’s rear seat base by about a quarter inch to compensate for the sloping roofline and retain ample head room. Its rear door openings sag lower at the top, but not frustratingly so. A two-piece rear bench with a simple storage console comes standard, but three seats are optional. To reduce border disputes between feuding rear-seat passengers, stick with the standard two-seat setup.

Rearward vision is obstructed by the sloping roof, but the standard Cayenne isn’t great either. The curved glass in the Coupe’s tailgate plays fun-house tricks with the rearview mirror in certain light.

Look up and you’ll find that the Cayenne Coupe comes with a standard panoramic sunroof, except when it doesn’t. The $14,440 Lightweight Sport Package adds a carbon-fiber roof that sheds nearly 50 pounds and lowers the center of gravity, Alcantara trim, a two-mode sport exhaust system, and lighter 22-inch alloy wheels that look divine but will cost $1,700 to re-wrap in Pirelli P-Zero rubber when the time comes. Yikes.

The Coupe holds about 22 cubic feet of cargo behind its rear seat compared to 27 cubes for the standard model. Most of that loss is above the belt line, so owners who don’t plan to stuff its cargo area to the headliner for a run across the border won’t notice. Maximum capacity is 54.3 cubes, which isn’t very good for a big SUV. But most Cayenne buyers aren’t after for maximum cargo capacity.

If you like the regular Cayenne and don’t plan to stuff its marginally more spacious cargo area to the headliner with luggage, the Coupe makes a stylish statement not as compromised as competitors from BMW and Mercedes-Benz. At around $76,000 in base guise, $13,000 more with the twin-turbo V-6 in Cayenne Coupe S trim, and a staggering $131,000 for the Cayenne Coupe Turbo, vanity will have its price when the crossover SUV hits American dealers this fall.

That’s about $10,000 more than a base Cayenne, but only $1,500 separates the Coupe from the standard model once its additional standard features are taken into account.

As I hustle the Cayenne Coupe back toward suburban sprawl around Graz, Austria, and away from demure Slovenia, the crossover SUV’s mission comes into focus. It’s an attention-grabber, but one more aligned with traditional Porsche values of style and performance than the comparatively dowdy standard Cayenne.