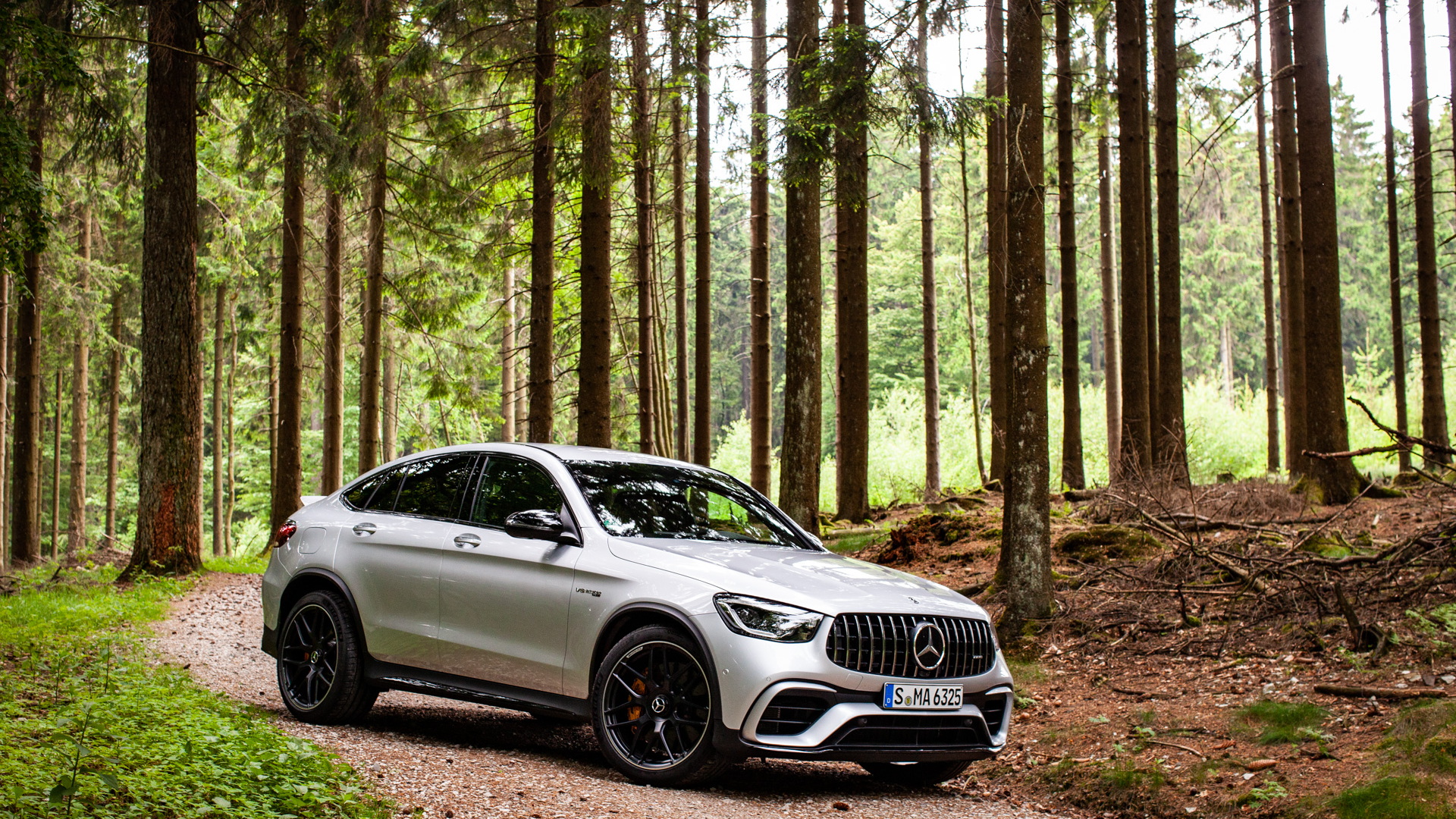 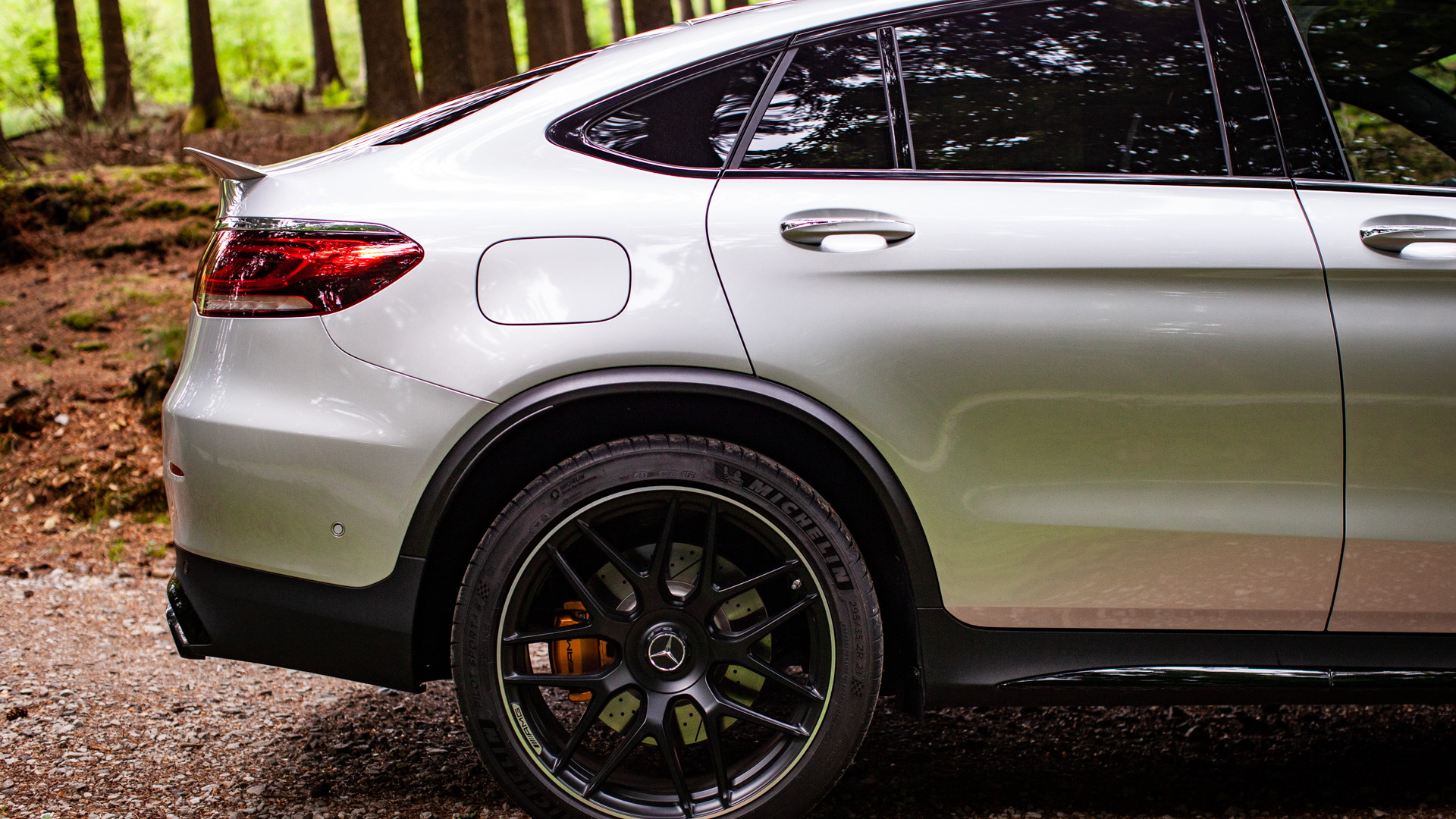 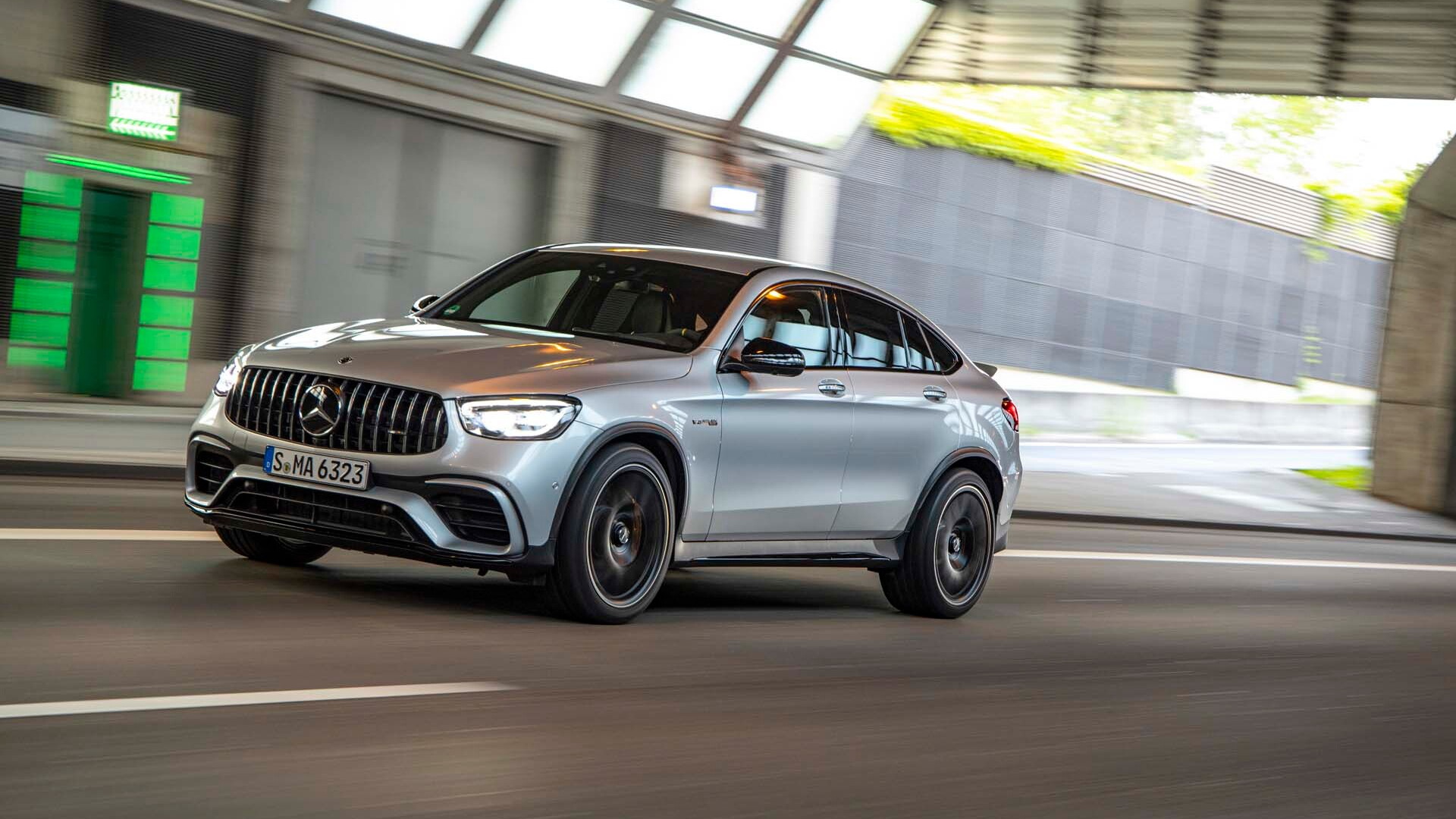 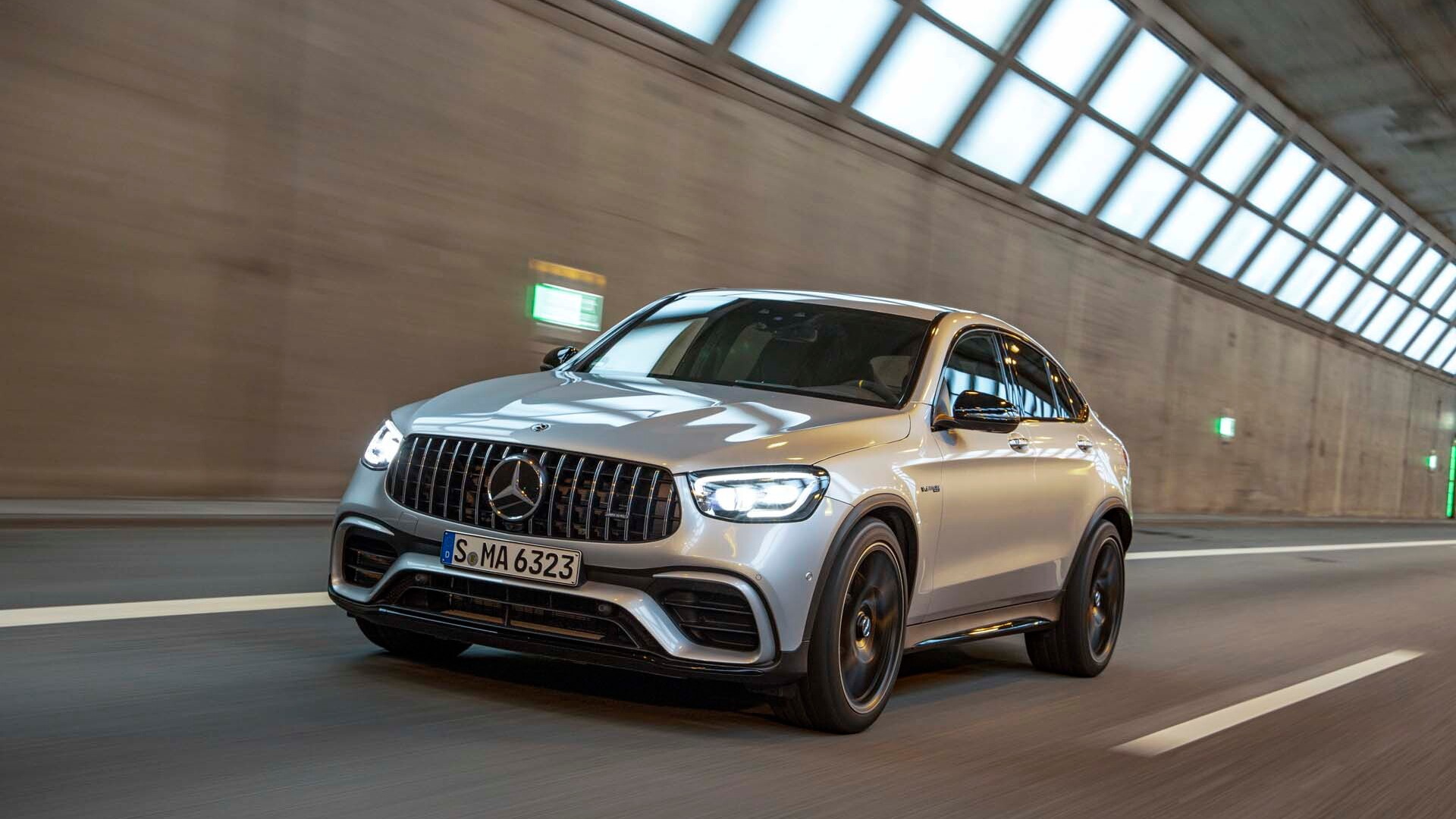 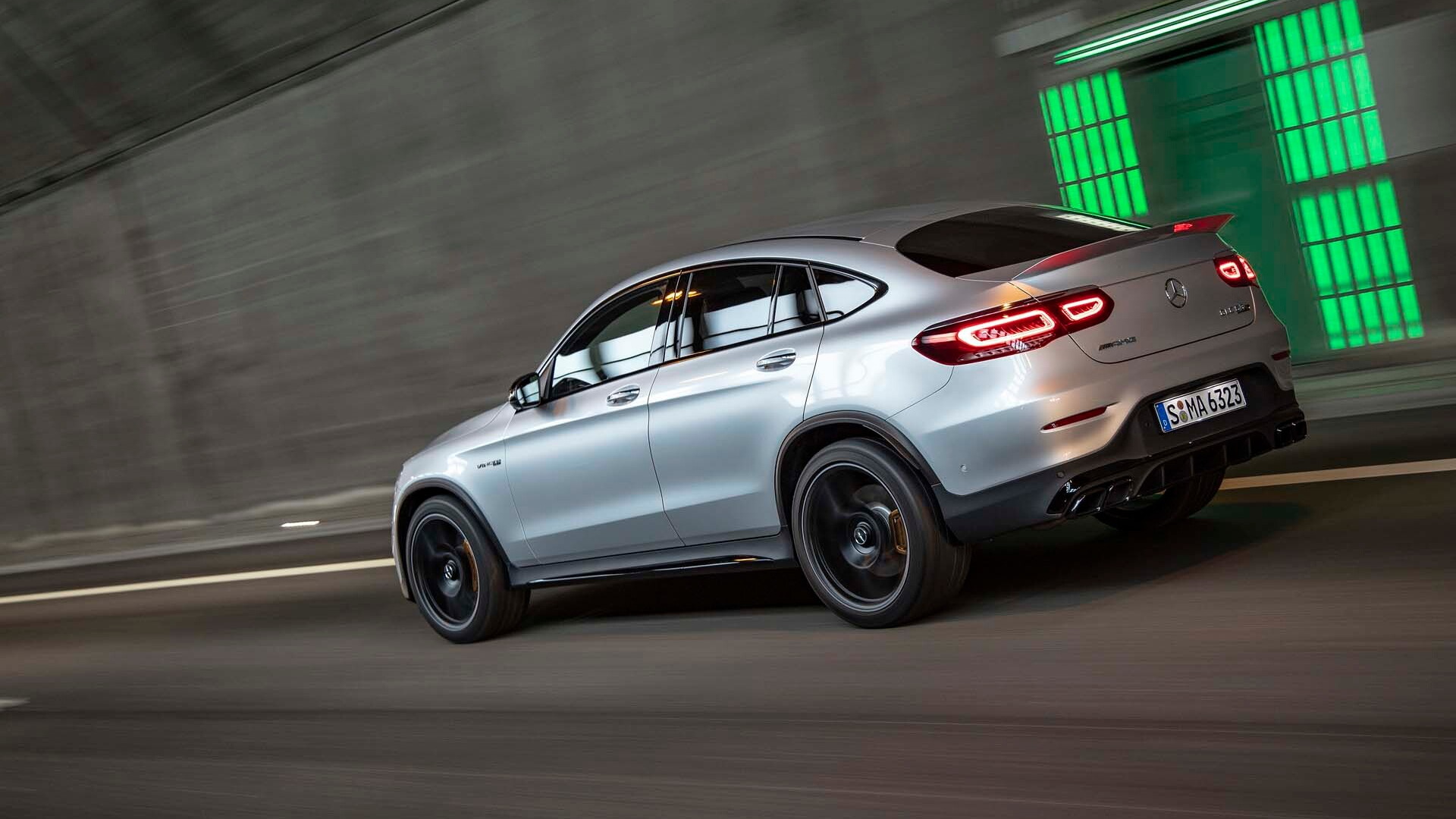 I’m not talking about the 2020 Mercedes-Benz AMG GLC 63 S Coupe. No, no. Just its decklid spoiler.

Here in the rolling hills outside Frankfurt, Germany, on sweeping stretches of the Autobahn where the ideal four-seater can stretch its legs into a 155-mph gallop, the GLC 63 S Coupe is at ease. At home in the States, where the 2020 GLC 63 S Coupe is often mired in traffic and twiddling its thumbs in valet lots, the high-po crossover feels pensive.

Like double kickstands from an unruly teenager at a mall, maybe that spoiler that rises at least 3 inches off the rear deck is begging for your attention?

Can you just look at me, guys!

This year, the GLC 63 S is lightly updated with new headlights and taillights, improved infotainment, and even more performance controls. It’s largely the same 503-horsepower crossover coupe as before—brash and entertaining, if not mostly unnecessary at more than $85,000 to start.

The coupe’s best trick is speed and drama, which it rips off in entertaining and brappy 3.6-second intervals, from a standstill to 60 mph, over and over again.

The GLC 63 crossover with a more practical shape costs fully $11,000 less than the 63 S Coupe, nearly the price for a fully loaded Apple Mac Pro and comparatively just as boring.

The coupe’s taste? Questionable. Practicality? Debatable. (It has five seats, but don’t ride hump in the back unless you’ve lost a bet.)

The coupe’s performance pedigree is without question, however. The GLC 63 S Coupe ripped off a Nürburgring-Nordschleife run of 7 minutes, 49 seconds, the fastest for an SUV and three seconds shy of the mark set by a C63 AMG Black Series sedan less than a decade ago—further proof of the GLC 63’s ascension to the sport compact throne for Mercedes, if you needed it.

Pearl-clutching purists may bemoan the lack of a naturally aspirated 6.2-liter lump in an AMG-badged anything, but the 63 S Coupe’s powerplant is plenty.

The twin-turbo’s 503 hp is codified into AMG’s lore with 516 pound-feet of twist that comes on early in the rev range and outruns most of my courage.

On the unrestricted Autobahn outside Frankfurt, north toward Bad Homburg, the GLC 63 S Coupe easily touches triple-digit speeds—155 mph arrives with all of the effort of a pre-nap yawn. The speed is thrilling, even though it’s not dramatic, and I’m sure the thirst to move the hulking 4,500-pound mass that fast is prolific.

This year, Mercedes-AMG adds yet another layer of controls to harness the impressive performance from the crossover coupe. The drive modes (Slippery, Comfort, Sport, Sport+, Race, and Individual) are complemented with four new AMG Dynamics programs: Basic, Advanced, Pro, and Master.

Beyond sounding like “Magic: The Gathering” competition levels, the four AMG Dynamics modes control all aspects of the coupe’s performance, including handling, suspension, stiffness of the engine mounts, throttle response, stability control, steering, transmission behavior, and torque from the all-wheel-drive system and its electronically controlled rear limited-slip differential included. Got all that?

It’s not exactly as granular as BMW’s system that can toggle up or down each separate system—the Basic setting is limited to the Slippery and Comfort drive modes, Advanced is limited to Sport, Pro is for Sport+, and Master is only available in Race and requires partially or altogether disabling the stability control first. (My $20 AAA International Driving piece of paper has never been stretched so far.)

Toggle through each driving mode via a rocker switch near the infotainment touchpad on the center console or via optional steering wheel controls, a la Ferrari’s manettino or Porsche’s drive selector knob, and the 12.3-inch instrument cluster displays the drive setup in a grid. What looks like a small Excel spreadsheet of information is useful—AMG Dynamics info is located in the bottom left corner, below three other configurations that I should pay attention to. It’s an eye test, but more fun: “If the bottom line is legible, buckle up.”

While the Basic AMG Dynamic setting is still blindingly fast with plenty of available throttle and rapid-fire shifts from the 9-speed automatic, I’m kidding myself if I think a GLC 63 S Coupe buyer is considering themselves as anything less than “Advanced.” (Eds note: Advanced at everything in life, perhaps.)

Advanced mode tightens steering through the thick-rimmed standard AMG sport wheel with more weight and a quicker response off center from the electrically assisted rack. The adjustable dampers tighten too, and the GLC 63 S hustles through side roads off the Autobahn like a halfback despite its fullback-sized dimensions and weight.

The feeling behind the wheel is immaculate; the divine power from the GLC 63 S comes through in progressive surges and begs me to squeeze the throttle around corners in successively deeper and deeper stabs. With the exhaust flaps toggled open from bubble to brap, the V-8 chortles through the Baden-Wurttemberg forests in giddy waves. Its tall ride height is one of few giveaways that the GLC 63 S is not a C63—I don’t mind so much.

Pro mode goes further, if it’s necessary, but the leap isn’t as pronounced as Basic to Advanced. In Pro mode, the throttle is more nervous: less of a squeeze and more of a seize. According to Mercedes, the engine mounts stiffen in Pro and Master modes to enhance turn-in, although the GLC Coupe’s greatest trick is to virtually shrink the crossover around the driver anyway.

Its steering response in any mode is already telepathic—even if it’s a one-way relationship without much communication back from the car—and tucks in neatly from corner to corner. Wide, staggered 20-inch wheels are wrapped with 265/40R20 and 295/40R20 Michelin Pilot Sport 4 gummies, front and rear, or 21-inch wheels with similar rubber as extra-cost bragging rights.

What the sticky tires keep secret is the rear differential’s good work. The electrically controlled rear differential hustles harder in Advanced, Pro, and Master modes, keeps wayward wheels in line without brake stabs, and delivers to over-confident drivers even more confidence to push harder through and out of corners. The mechanical grip from the differential, wheels, and stiff dampers amounts a symphony of speed in esses—and brings us back to that spoiler.

Its downforce is questionable, but its purpose is clear: It’s less than necessary and defies convention and logic.

But it’s more fun than high school, even if it’s just as mature. I guess that’s the point.

Room for two, with 'tude

Inside, the comfortable GLC 63 S Coupe is best for two, although it’s possible for more. Six-footers can comfortably sit behind 6-footers, thanks to the deeply sculpted but thin sport buckets up front. The seat bottoms are thinly padded, but soft leather makes up for the shortcoming. Wide bodies may get pinched a little from the adjustable bolsters, but even my wide shoulders nestle neatly underneath the integrated headrest.

About that infotainment system: it’s very good, but also not critical to the mission of the GLC 63 S. Controlled via a flatter touchpad located on the center console, steering wheel controls, voice commands, gesture controls, or even the touchscreen itself, the Mercedes MBUX system commands too much attention that’s better spent on driving in the GLC 63 S Coupe. In a GLE? Perfect. In a GLC 63 S? Leave it for the parking lot.

In Europe, the new system can even order food or pay for parking, but that’s not yet available in the States. Anyone caught eating Burger King behind the wheel of a speeding GLC 63 S in the U.S. will be banished to live in Wyoming forever—and I don’t mean the good parts near the Tetons.

The coupe’s cargo space under the rear hatch is useful, albeit abbreviated compared to the standard crossover. The rear door cutouts are a little awkward and outward vision to the rear and rear three-quarter views may as well be through a periscope.

But you don’t think all the cool kids wear flat-brim caps to shield their eyes from the sun, do you?