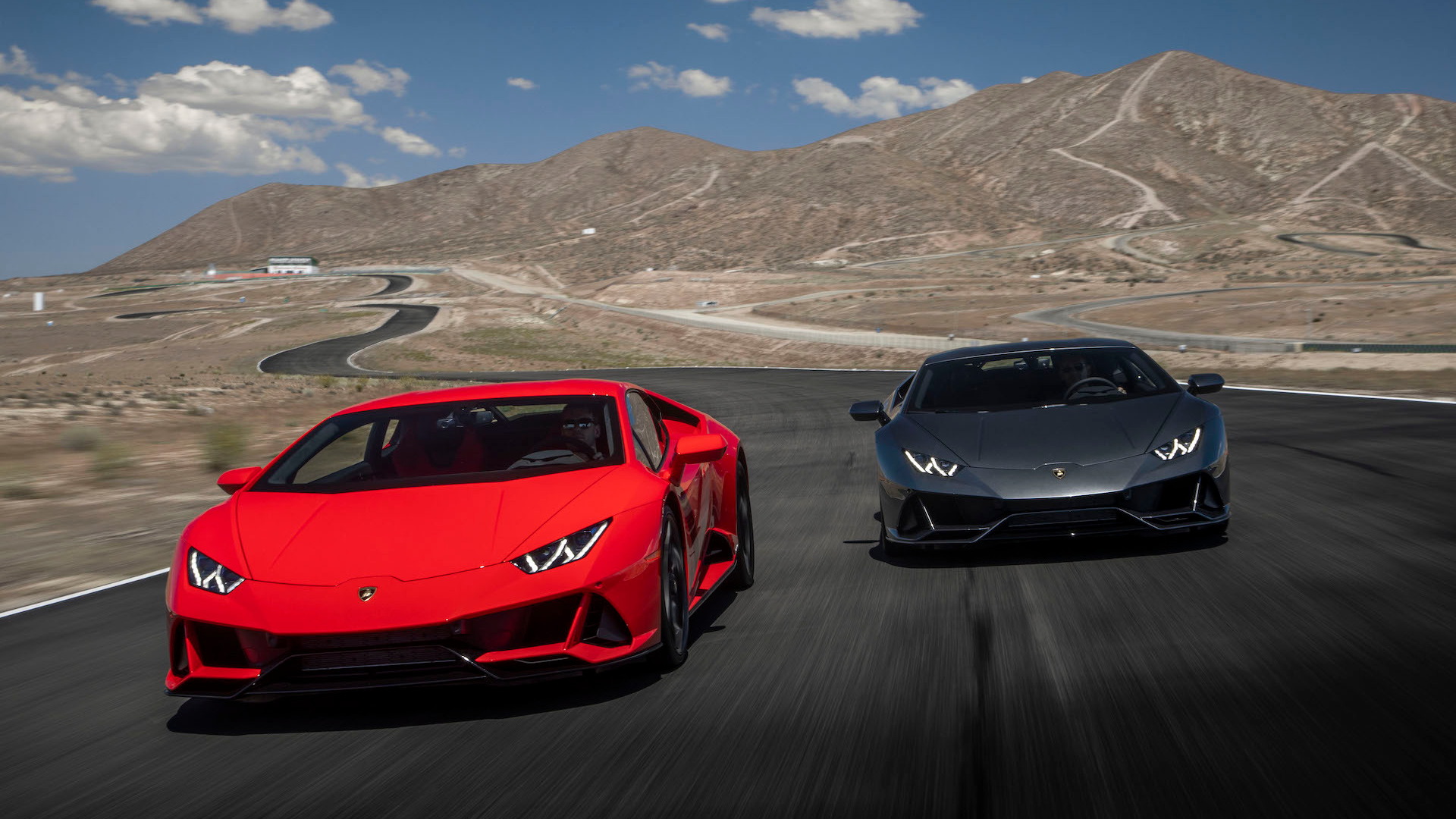 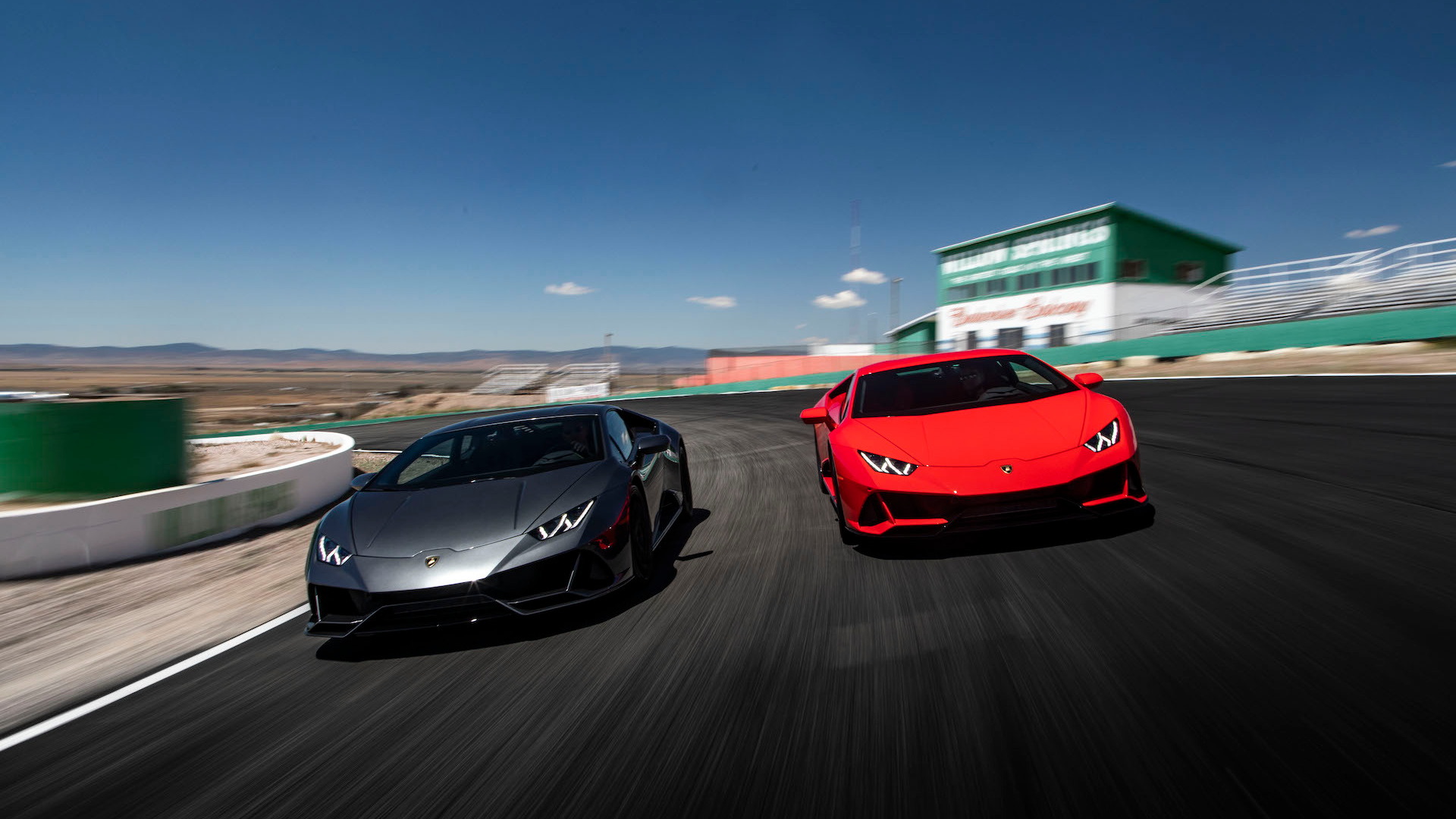 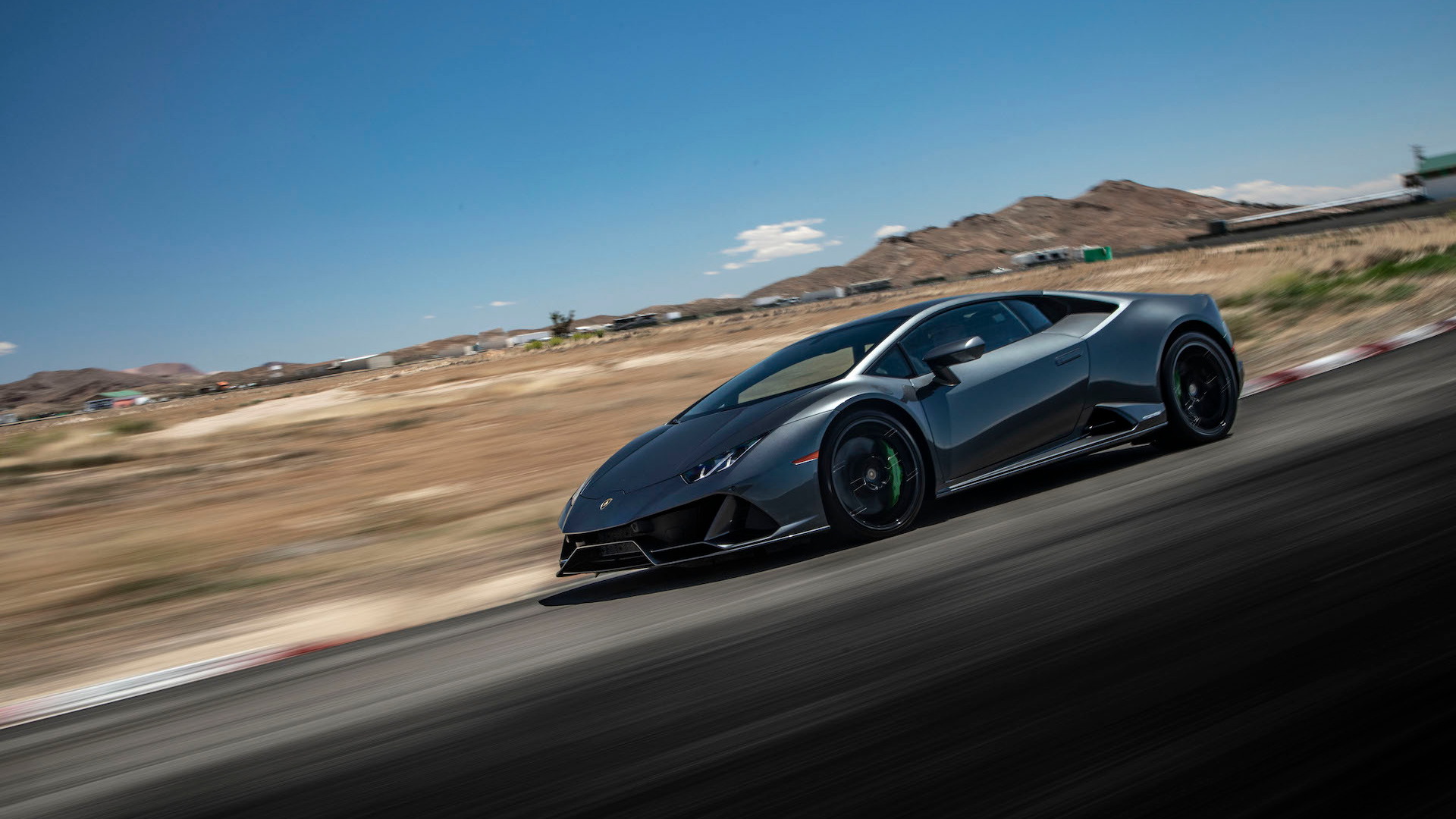 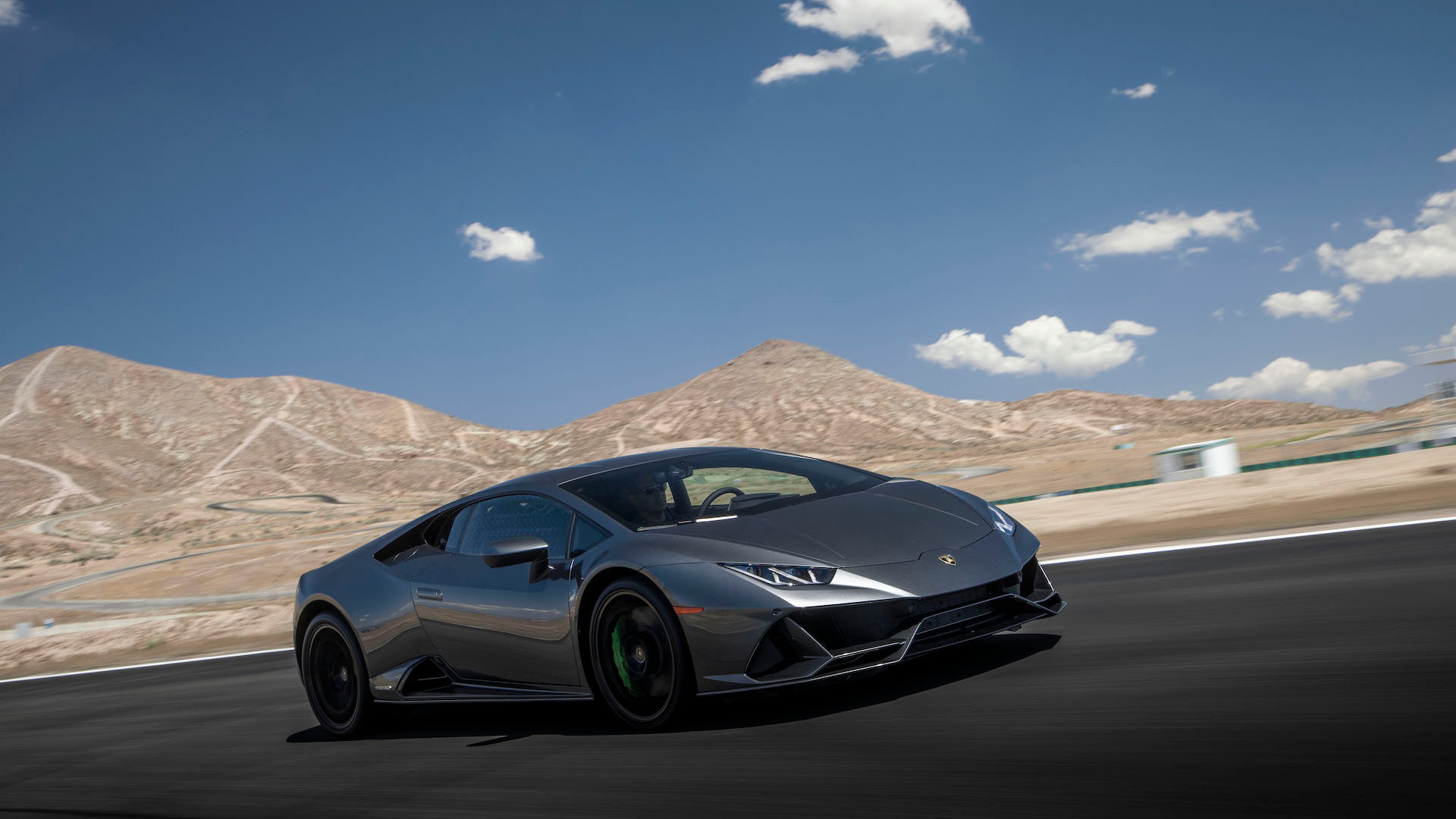 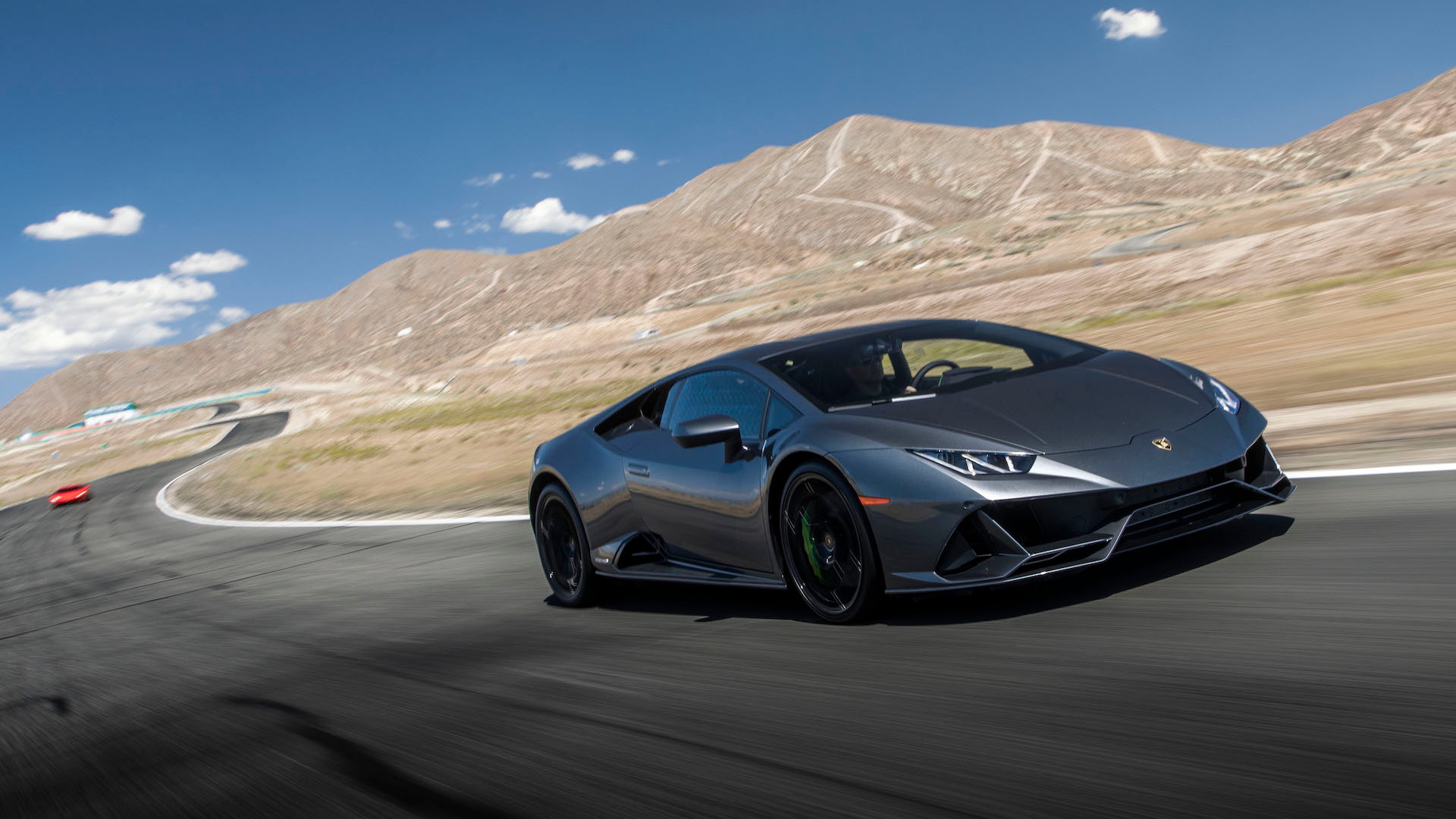 Big Willow at Willow Springs Raceway is a daunting 2.5-mile stretch of undulating asphalt in California’s Mojave desert. It provides a bumpy, off-camber, high-speed rollercoaster ride that only becomes more intimidating the higher the speeds rise and the harder the dampers are. On this 99-degree scorcher of a June day, it will put the revisions made to the 2019 Lamborghini Huracán Evo to the test. Will this super sports car ride buckboard hard on this bear of a track or handle it with ease? I’m about to find out.

I have my own personal escort on this four-lap journey. His name is Kevin Conway. He’s a Lamborghini Squadra Corsa driver, and the 2010 NASCAR Sprint Cup Rookie of the Year. He doesn’t know me from Adam, and that could be a problem.

With one crack at the track, I dial up Corsa (Italian for Track) mode on the red toggle on the bottom of the steering wheel and head out behind a pro racing driver. Corsa is meant to get me around the track as quickly as possible. If I wanted to have more fun and hang the tail out in corners, I’d choose Sport.

Conway isn’t messing around and we accelerate with gusto out of the pits, approaching the car’s ludicrous 2.9-second 0-60 mph sprint, then head into the turns. Speed builds like a bull shot out of the shoot, and Corsa mode demands manual shifts via the large titanium paddles behind the steering wheel. Blue lines in the digital gauge cluster act as shift lights, coming together to tell me when it’s time to grab the next gear. The 7-speed dual-clutch transmission fires off shifts with the immediacy of a silenced rifle blast, and the raucous V-10 crackles and spits between gears.

Improved breathing through a revised intake manifold and new titanium intake valves squeeze more power from mid-mounted 5.2-liter V-10. It now makes 29 more horsepower for a total of 630 horses at a dazzling 8,000 rpm and 30 additional pound-feet of torque to bring the total to 443 lb-ft at an also high 6,500 rpm. The naturally aspirated V-10 sings its thunderous song through a reworked exhaust system.

In addition to those shifts, Corsa sets some other parameters for the car. The all-wheel-drive system aims for a 20/80 front/rear bias but adjusts based on the situation, and the steering ratio changes from Strada’s 16:1 to a razor sharp 9.5:1.

If I had the time right now, I could be watching the Huracán Evo’s new 8.4-inch center touchscreen, which I’ve set to its LDPI (Lamborghini Dinamica Veicolo Integrata) screen, to watch the percentages of power front to rear and steering angle front and rear. Instead, my eyes are forward, switching between Conway’s line and the entry, apex, and exit points of the track’s nine turns.

Lamborghini had a problem with the last Huracán. It was too good. Though it had less power and cost much less than the V-12-powered Aventador, the lighter Huracán challenged and beat its bigger brother for lap times. So, Lamborghini gave the Aventador rear-axle steering to help it around racetracks. Then, when the Huracán Performante with the new Aerodinamica Lamborghini Attiva (ALA) system set a new Nürburgring production car track record, that system moved over to the Aventador SVJ where it helped the SVJ claim the same record.

For 2019, Lamborghini massaged the body lines for improved downforce and aero efficiency, while also adding chassis technology to make the car more nimble and controlled. A new front splitter with an integrated wing, a reshaped underbody, and a slotted rear spoiler help improve aero efficiency by a multiple of six. The car has seven times more downforce thanks to that rear spoiler and a new rear diffuser. New front ducts help clean up turbulence and channel air to the rear cooling ducts where they help improve cooling by 16 percent.

The chassis tech is even more extensive. With the Evo, the rear-axle-steering system is adopted by the Huracán for the first time. It turns the rear wheels up to 3 degrees opposite of the fronts at speeds of 50 mph or lower, then turns them with the fronts at higher speeds for more stability. The car also adds brake-based torque vectoring and the LDPI system. The latter is a big computer brain that takes in information from all of the car’s other dynamics systems (rear-axle steering, stability control, all-wheel drive, magnetic ride control dampers, and the series of accelerometers and gyroscopes placed at the car’s center of gravity that make up the Lamborghini Piattaforma Inerziale system) and predicts where the car is going and helps it get there. This system can react to constant changes in driving conditions within 20 milliseconds. Previously, each system acted more or less independently and reacted to the driving situation instead of anticipating it.

Thanks to these changes, the one and only Huracán is now quicker on smaller tracks like the road course at Italy’s Nardo test facility than the Huracán Performante, the ultimate track version, had been. The massive amounts of downforce and air vectoring capability of the ALA system, however, mean that the Performante is still the Huracán king on longer, higher-speed tracks. Can a Huracán Evo Performante be far off?

Following Conway through the track’s early corners, I grow confident in what this car can do. I stay about two car lengths off his tail and follow his line. The Alcantara-upholstered steering wheel provides great feedback, and I don’t have to turn it far to make the car follow his path.

Turns 2, 3, and 4 are tighter and require lower speeds. This is where the rear-axle steering makes the Evo more nimble than the previous Huracán. What that doesn’t handle, the new brake-based torque vectoring can accomplish. Both systems shorten these turns, and the LDPI system controls it all.

In the press briefing before the drive, Lamborghini's U.S.-market chief Alessandro Farmeschi said of the LDPI system, “The effect is that you start becoming a superhero.”

Gradually I grow even more confident and shorten that gap to perhaps a car length.

Conway’s voice comes over the in-car radio: “Back off a bit and give me more room.”

Still, I reluctantly do what I’m told, though I know there’s a lot more room to play with this car’s capabilities.

As we head into the track’s test of manhood, the bumpy, bending turn 8 and the lead up to turn 9 with its breathtaking dip, we maybe reach 110 mph, though I’ve been close to 125 mph here in the Mercedes-Benz SLS AMG Black Series. This car’s magnetic dampers (retuned and more responsive), low and wide stance, and massive Pirelli P Zero 20-inch tires can handle this track better than just about anything on the market today, let alone six years ago. I expected to get to 125 or maybe 130 mph here. Conway isn’t having it.

We do reach 150-plus on the front stretch, but even that involves early braking before turn 1. That’s not a challenge for the 15-inch front and 14-inch rear carbon-ceramic brakes with their 6-piston front and 4-piston rear calipers.

I’m feeling my oats as we hit turn 1. The quick steering makes for equally quick turn in, the car stays defiantly flat through the corner, the wide Pirelli P Zero tires grab the sticky pavement, and I push up closer through the next series of turns.

Again, he tells me to back off. Again, I think he should go faster. Again, I defer reluctantly.

Farmeschi is right. The Huracán Evo does make me feel like a superhero, but Superman doesn’t fly with restricted airspeeds, Batman isn’t limited to what he can carry on his utility belt, and Iron Man isn’t limited to 1930s technology. I want to explore more than 6/10ths of this car’s capability.

Even at this pace, though, the Evo’s colors shine through. It’s a considerable step up from the excellent car it replaces. The rear-axle steering makes it more nimble through the tight stuff. The improved aerodynamics give it more downforce without reducing its 202 mph top speed, and that means it can stick to the track better in high-speed corners, too. The big brain that is the LDPI system helps put the car on its intended path but doesn’t intrude on the driving experience. And the updated infotainment system appears to be much more user friendly, though I’ve only had limited exposure.

The 2019 Lamborghini Huracán Evo certainly conquers the gauntlet that is Big Willow. The new Huracán may not be entirely new, but it’s evolved in the best way possible.