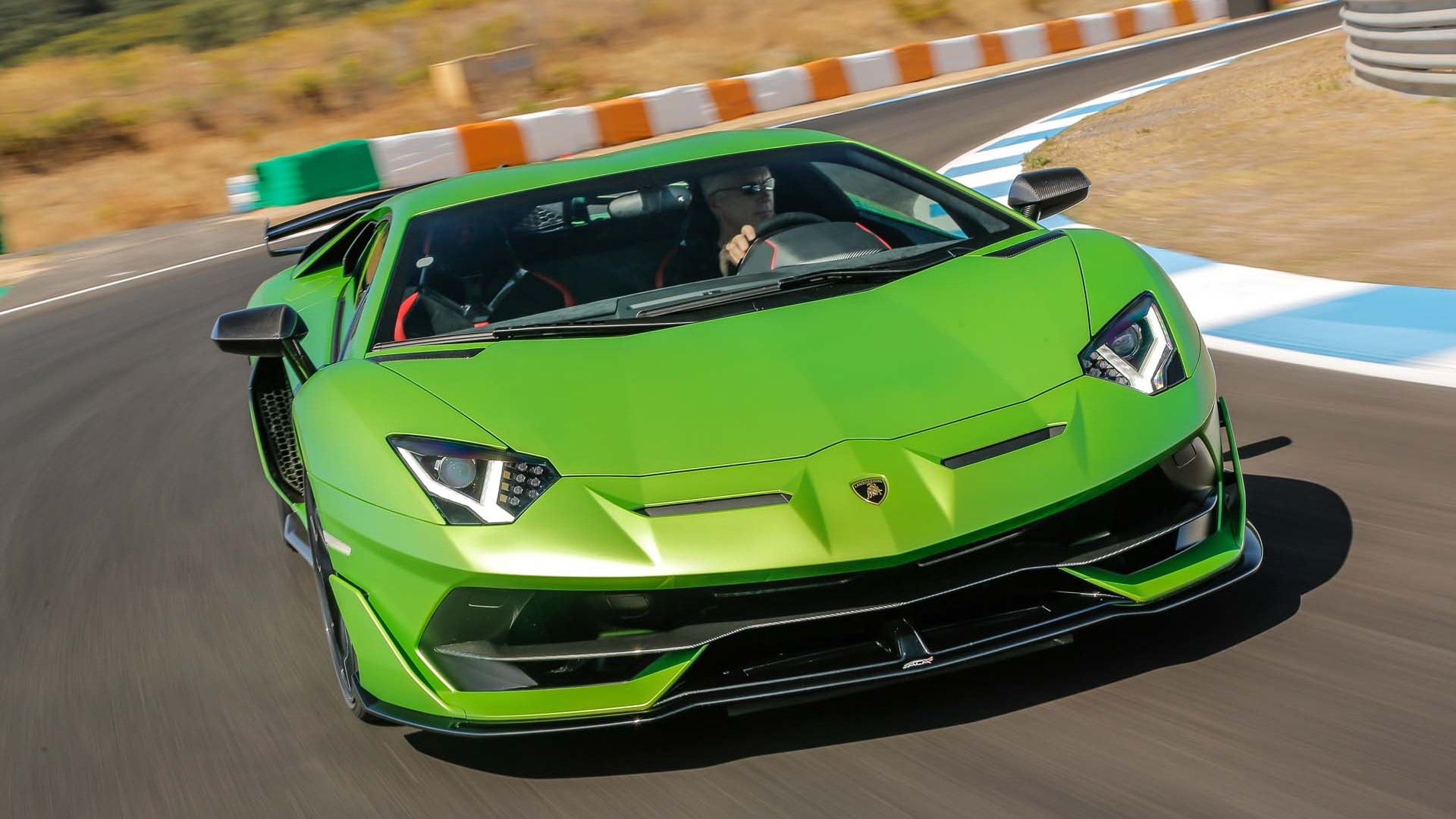 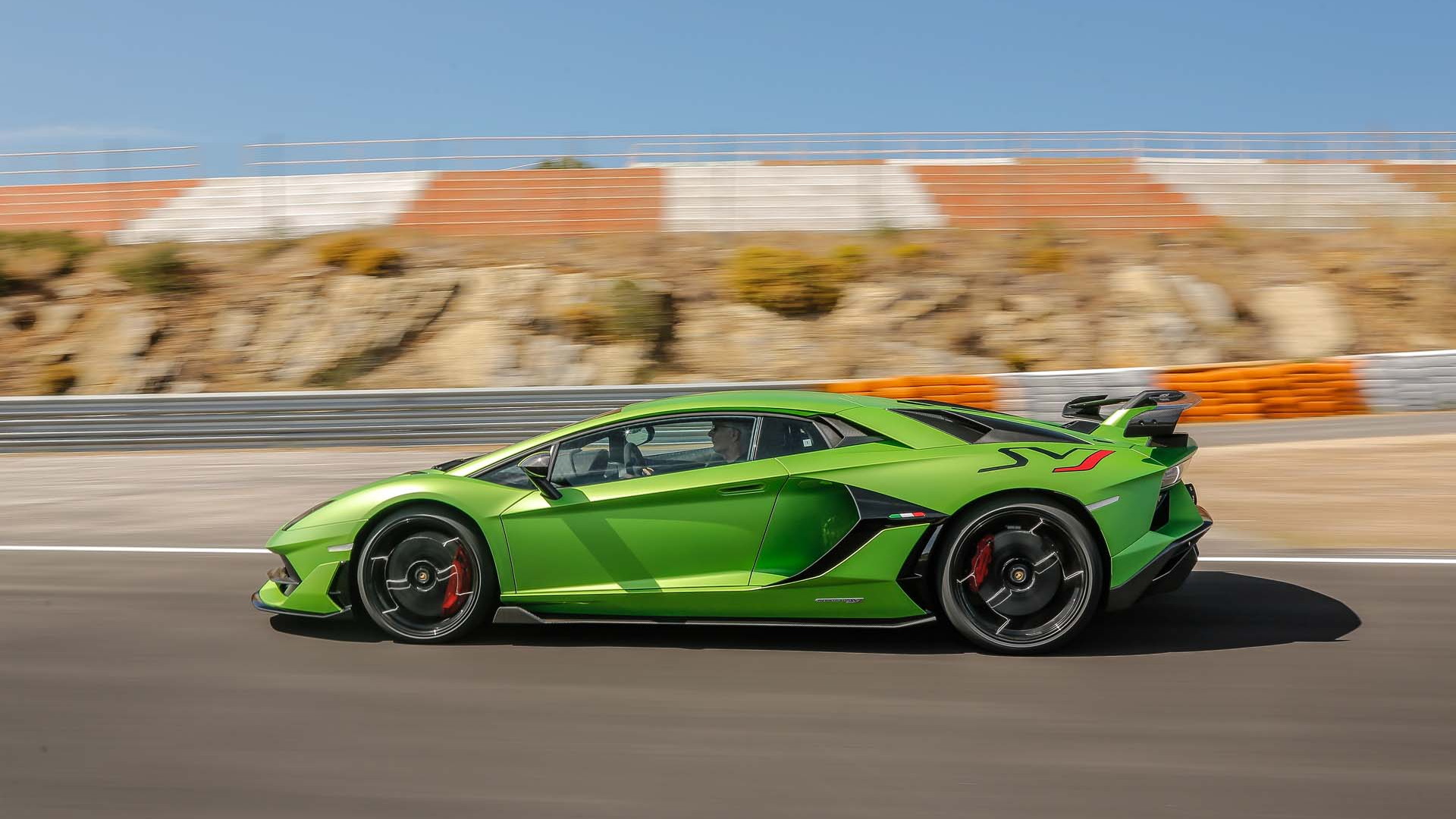 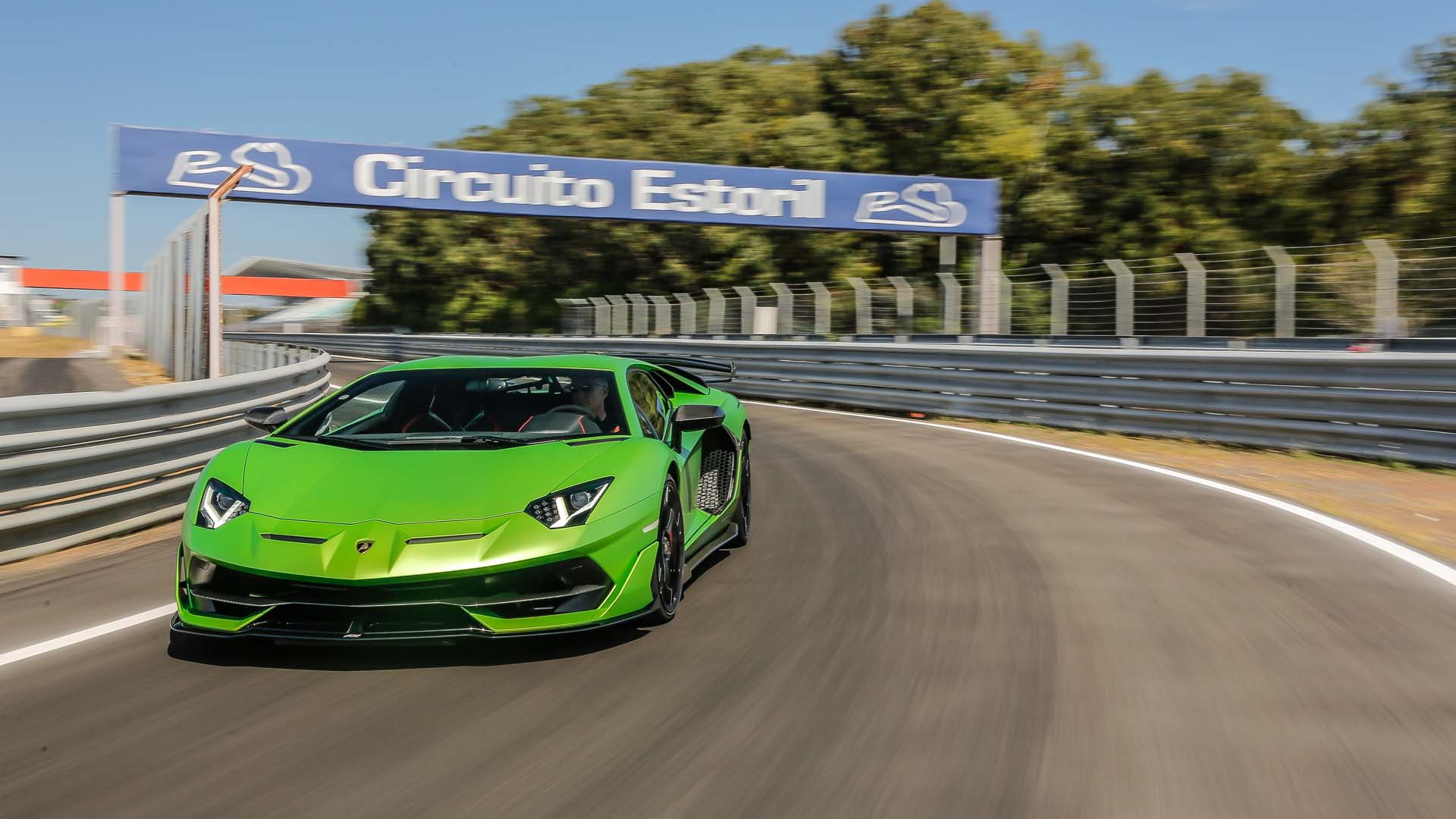 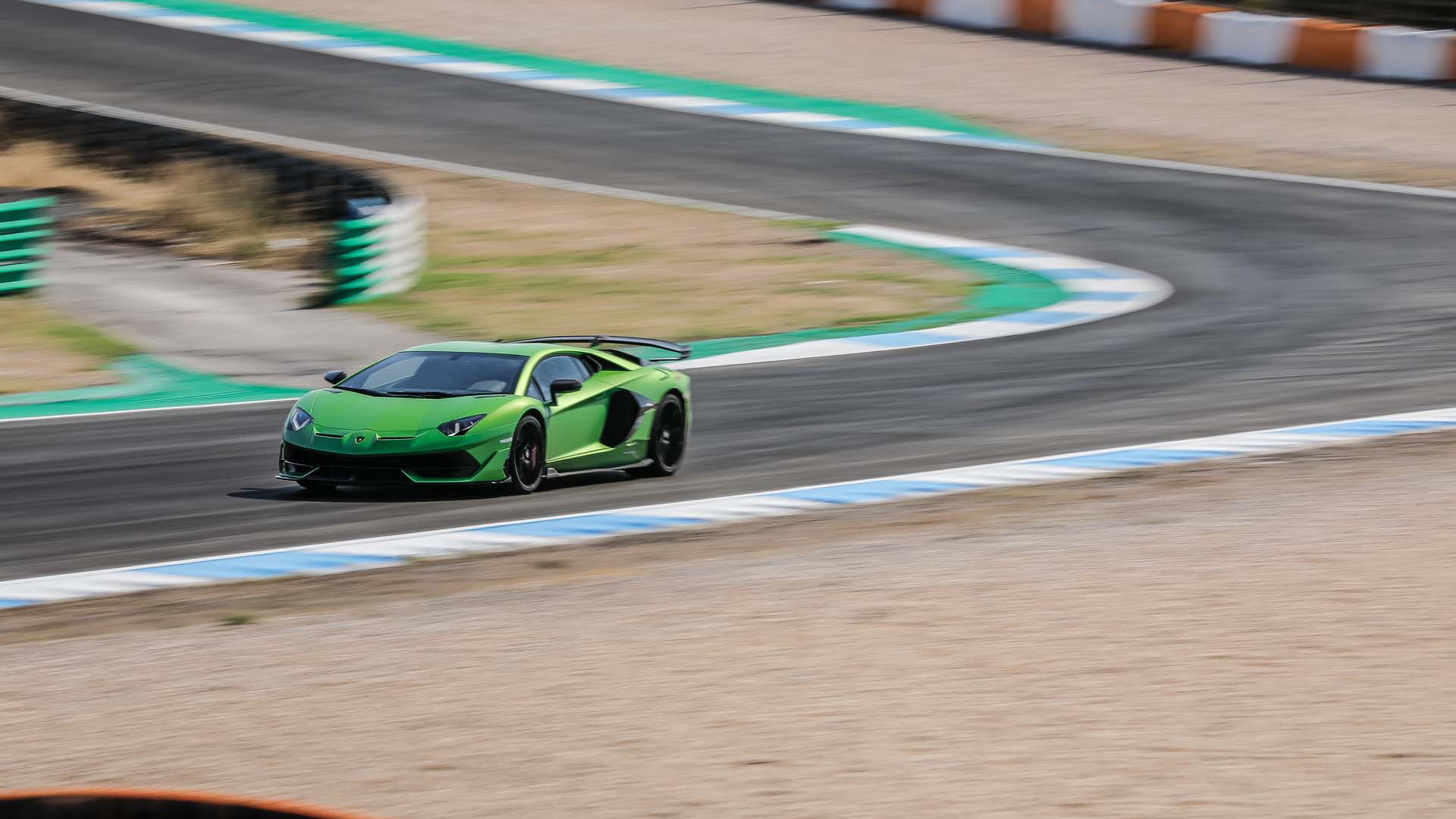 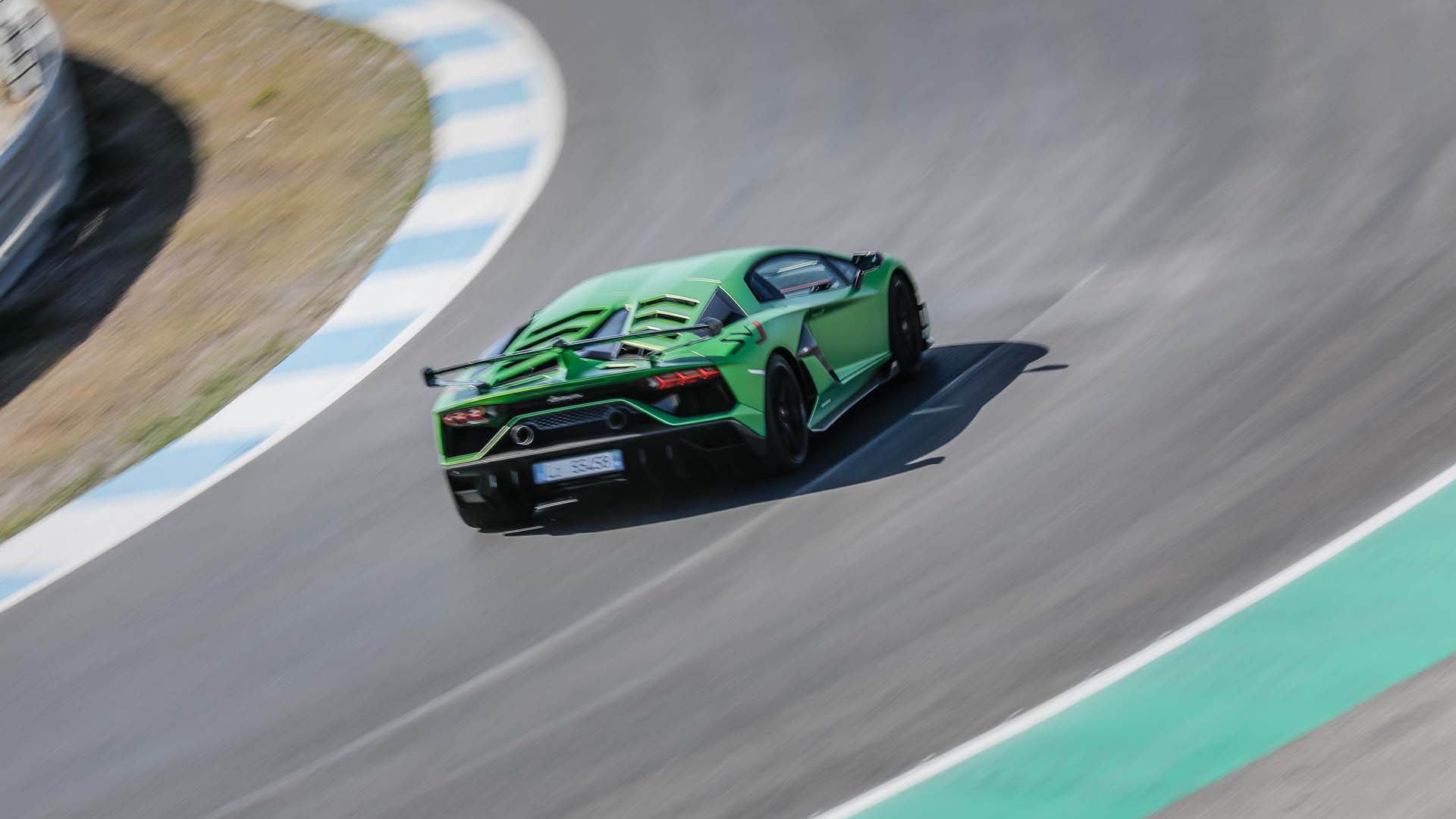 I didn’t kill the little orange traffic cone on purpose, but nor did I have much regret for its demise, which was in the name of science. Or at least, research.

Lamborghini requested that I run my first laps in the new track-centric Aventador SVJ (Super Veloce Jota, a name borrowed from its classic Miura) at the Grand Prix circuit in Estoril, Portugal in the street-focused Sport mode rather than Corsa, which is better tuned to the greater demands of track driving.

Driving in Sport meant the $517,770 (base price) Aventador couldn’t corner at its best because the car saves all its techno-trickery for Corsa. So when I drove through the Parabolica turn onto the track’s front straight, the car began sliding on the slick, recently repaved surface. The trajectory was still good to make it onto the front straight, but Lamborghini’s track team had set out cones to shepherd journalists onto the correct line, and one of those lay in the Italian rocket’s path.

In subsequent laps, running in Corsa, the SVJ was magnificent. It adhered closely to the intended path and responded to both the steering wheel and the throttle to make adjustments as needed. Lesson learned, Sport is for the street and Corsa is for the race course.

It also showed the value of the wizardry Lamborghini has deployed in its latest iteration of its V-12 flagship that can produce such disparate performance in the same car.

Supercars in general and Lamborghinis in particular are at least as much about show as about go, and the Lamborghini Aventador SVJ delivers more of each than previous iterations. As evidence of the go part, the car is the current Nürburgring lap record holder for street-legal production cars, achieving an astounding 6:44.97 lap to displace the Porsche 911 GT2 RS that toppled the Lamborghini Huracán Performante last year.

Vibrant paint colors and ostentatious carbon-fiber aerodynamic aids provide instant notice that this is a special version of an already special car. The SVJ’s rear wing is a more flamboyant display of plumage than a peacock’s fan of tail feathers. The all-encompassing experience of driving the car on the racetrack proves that the SVJ delivers on the promise of those cues and its Nürburgring claims.

It is worth remembering that the Aventador is a mammoth car on a tightly twisted track. It, stretches 194.6 inches and carries a 6.5-liter V12 behind the cockpit. It powers all four wheels with the fury of 759 horsepower and 531 pound-feet of torque. The ability to make such a monster dance rather than bulldoze its way around corners is a noteworthy accomplishment for Lamborghini.

Indeed, these all-wheel-drive cars have in previous versions turned in to corners sluggishly, with steering response delayed by front tires already working to channel power to the pavement. This is typical of front-drive cars, but is disappointing in a mid-engine supercar, and with the SVJ, Lamborghini has banished that unfortunate characteristic.

Lamborghini engineers did this through the judicious application of technology, specifically the second generation of the Aerodinamica Lamborghini Attiva (ALA) system of active aerodynamics that was so impressive on the Huracán Performante. They also installed rear-wheel steering to aid in low-speed agility and high-speed stability. This system effectively quickens the steering ratio to a synaptic 10:1 when hustling the SVJ through Estoril’s chicane and slows it to a confidence-inspiring 18:1 through the track’s gut-check right-hand bend in the back straight that is taken flat out.

The ALA 2.0 system boosts downforce to an impressive 1,100 lb. Just as significantly, ALA is active, so in turns it presses down on the inside of the car, but not the outside; that, helps keep the SVJ flatter when cornering. It is also smart enough to go to a low-drag mode when driving flat-out on straights, and a high-downforce configuration to stabilize the car under braking.

That is fortunate, because stability when braking at the maximum proved problematic in the SVJ. Even with its enormous carbon ceramic brakes and six-piston front calipers, the car suffered from considerable pedal travel and a tendency to dart around when the anti-lock brake system activated. Lamborghini points out that the SVJ will live virtually all its life on the street and so the company tunes the brakes to be more user-friendly in street driving.

The SVJ’s naturally aspirated V-12 oozes more charisma than George Clooney, and as the industry increasingly turns to turbocharged engines with an industrial character, the V-12 stands out like a neon-lit casino in a drab office park.

Lamborghini knows that this is its advantage, and its one it has no plans to surrender by following the dedicated followers of turbo fashion. Instead, the SVJ has an even less restricted muffler that blares the Aventador’s V-12 song out the back.

That V-12 is 30 horsepower stronger than in the SV version of the car, thanks to improved airflow into and out of the engine, with trick parts like titanium valves. But the ALA 2.0 is the SVJ’s primary advantage over lesser Aventadors. Apply it correctly, and the life you save may be your cone.