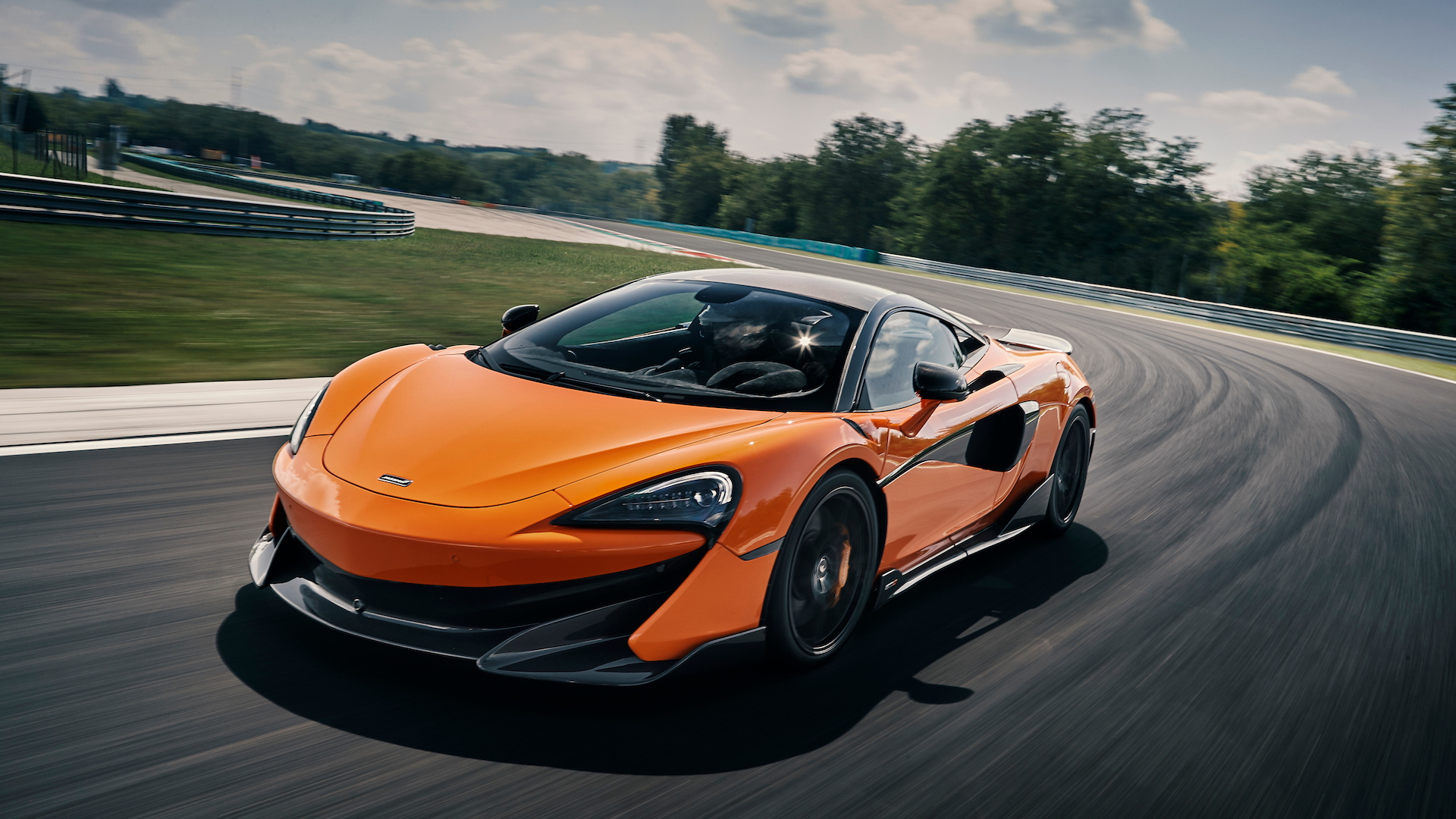 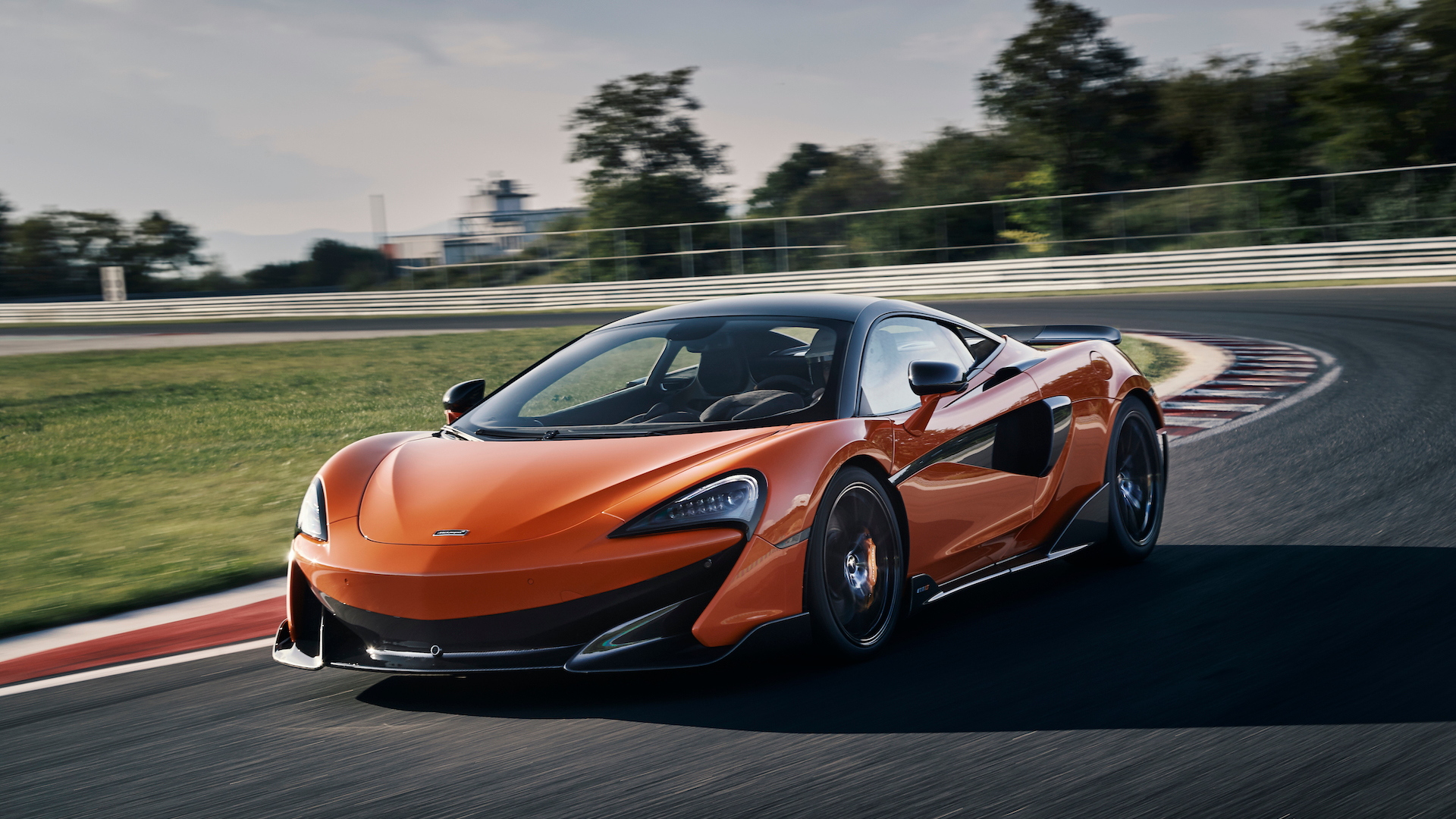 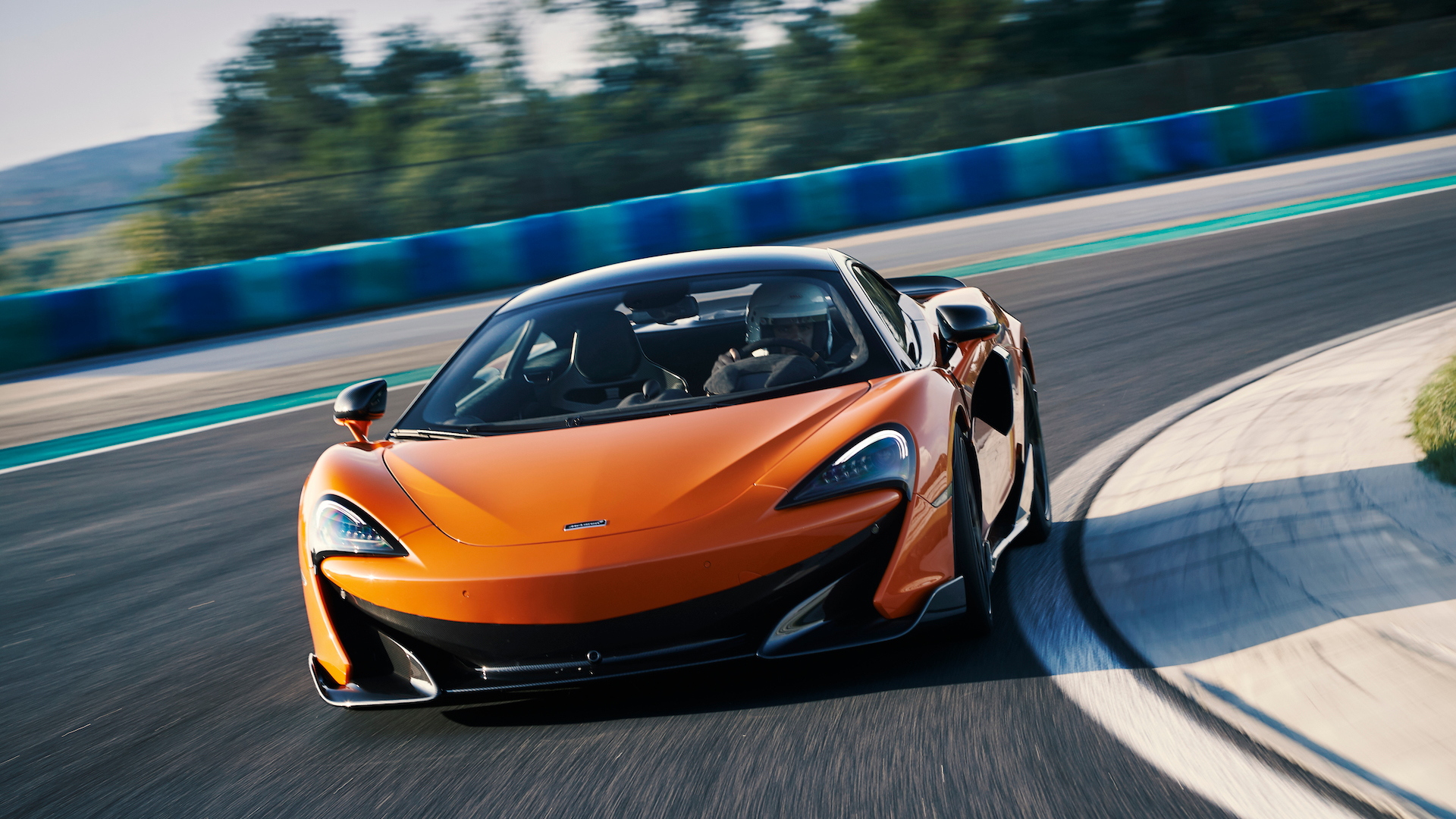 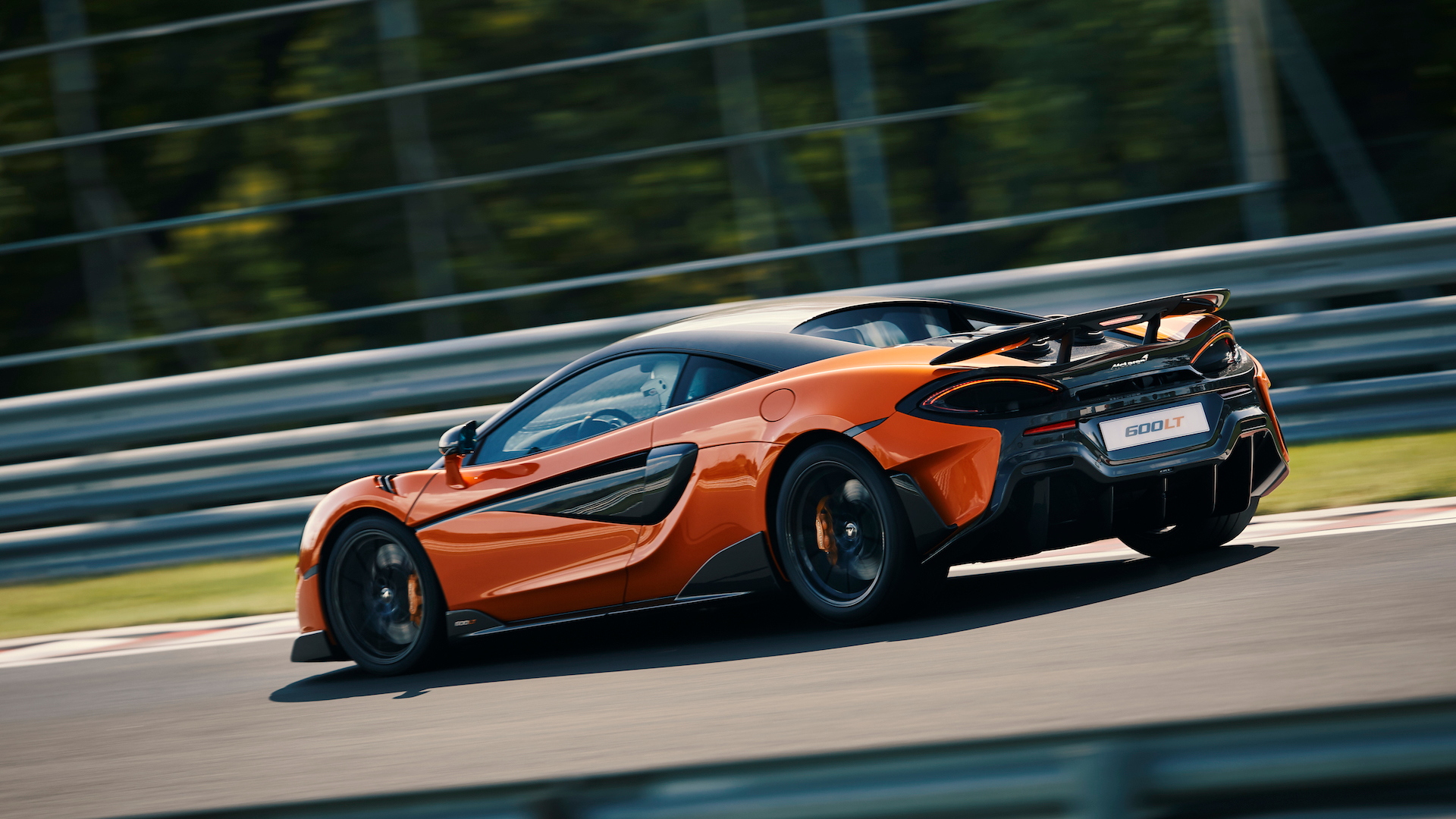 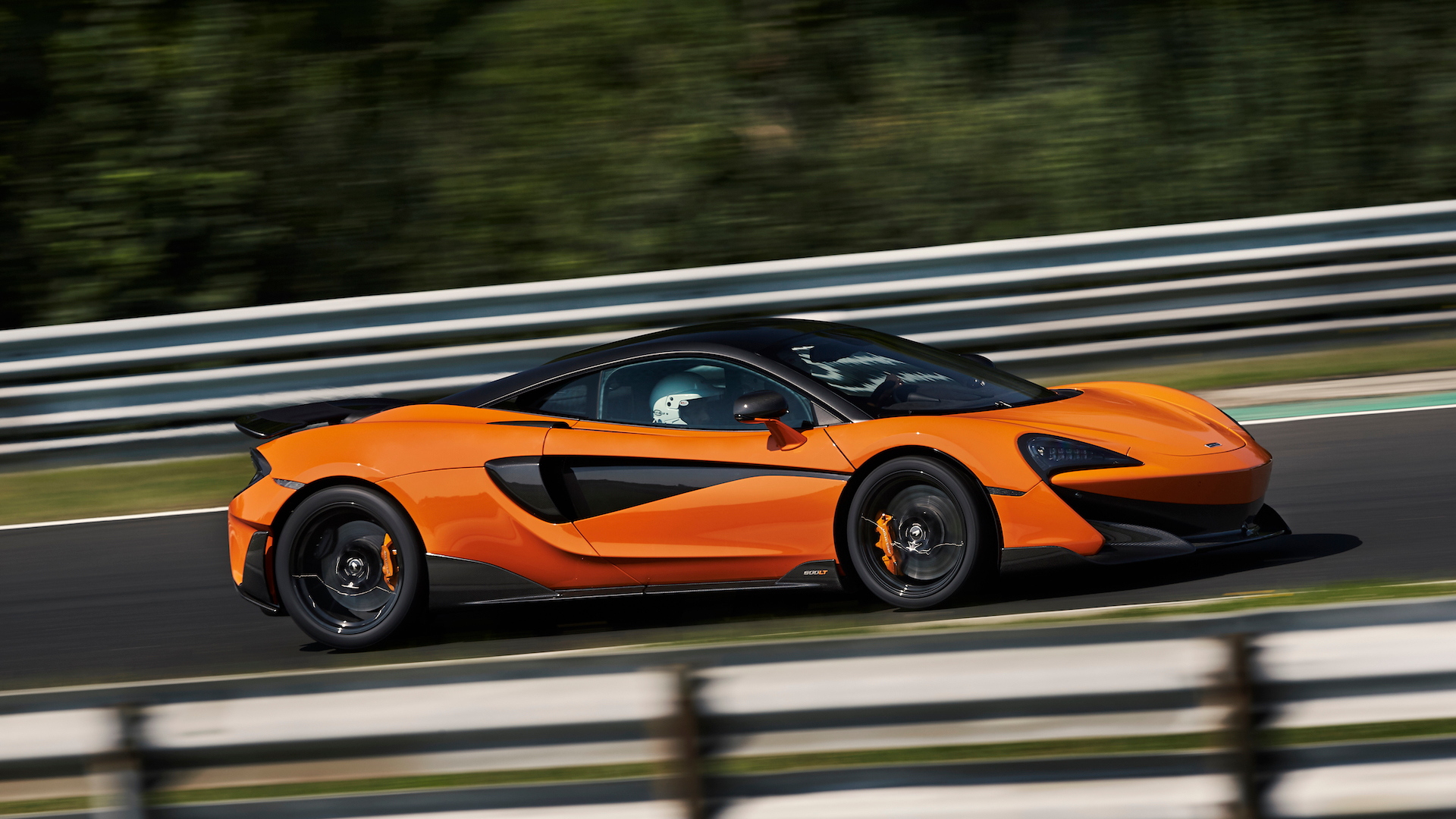 Braking at the same point in turn 1 of Budapest’s Hungaroring circuit as when driving the 570S, the 600LT stops well short and then has to be driven to the turn on the throttle. It's not exactly the fastest way around, but I’m keeping my instructor happy with a conservative early-braking approach that still lets the 600LT demonstrate its vast superiority.

Both the new 600LT and the 570S are part of McLaren’s entry-level Sport Series, but the 2019 McLaren 600LT’s upgraded brake system is the key to its track day capabilities.

Yes, the 570S has carbon-ceramic brake rotors and fancy many-piston aluminum brake calipers, but for the 600LT, McLaren engineers have reworked the master cylinder to eliminate wasted travel at the beginning of the stroke. And the 570S depends on engine vacuum, which varies depending on engine load and speed, to power its brake booster.

The 600LT borrows the electric vacuum pump used in the Senna to provide a consistent source of vacuum for brake boost. This combines with the retuned master cylinder to produce a completely different braking experience on the track and shorter stopping distances according to the tape measure.

The firmer pedal and its reduced travel are both readily apparent and provide the all-important confidence needed to push hard on a racetrack. By comparison, the 570S’s pedal is spongy and vague (by supercar standards). McLaren achieves this without the aggressive grabbiness of Ferrari’s carbon ceramics, so it's easy to lightly brush the brakes to bleed a little speed without inadvertently upsetting the car.

McLaren engineers are plenty proud of their work on the brakes, so it comes as no surprise that the binders are superlative. What is a bit unexpected is how well the 600LT changes direction and tolerates driving on the apex curbs and corner-exit rumble strips.

McLaren’s ability to produce these results with lesser suspension components is impressive because this is a key attribute of the Senna that is now available for a much lower price.

McLaren Automotive rolled out the Senna a few months ago. A limited-production, million-dollar, track-focused weapon meant to satiate the would-be racers among the company’s exclusive clientele, all 500 Sennas are already sold.

The thing is that limited-production, million-dollar hypercars have become investment vehicles more than actual vehicles. This makes the Senna a touch precious for track use, and creates the opportunity for the 600LT as a more affordable alternative.

The “600” portion of the name is a reference to the car’s metric horsepower (it is rated at 592 SAE net horsepower), and "LT" is a hat tip to the company’s legendary F1 Longtail, a track-focused version of McLaren’s first production sports car. Today “LT” is more a track-oriented philosophy than an actual extension of the car’s posterior, though the 600LT is incrementally longer than the 570S upon which it is based because of the use of a longer front splitter and rear diffuser.

The car’s $240,000 base price is attractive, especially in comparison to the Senna’s seven-figure price. However, my test car is dressed in another $62,000 worth of options.

For the true mini-Senna experience, buyers will want the optional carbon-fiber rooftop engine intake snorkel, a signature feature of the original McLaren F1 that costs a breathtaking $30,000.

Prospective 600LT buyers will have to act quickly, as production will only run about 12 months. McLaren isn’t setting a specific cap on 600LT sales, but by this time next year, if your car isn’t already under construction, you’re likely out of luck. However, there could be a good reason to procrastinate as McLaren says it has a convertible version of the 600LT waiting to debut in 2019.

But really a better 570S

Like the 570S, the 600LT is powered by a version of McLaren’s 3.8-liter twin-turbo V-8 mounted amidship within the company’s MonoCell II carbon-fiber chassis. The 600LT not only has an extra 30 horsepower over the 570S, it is also 100 kg (220.5 lbs) lighter, which makes a greater contribution to the car’s performance advantage over its sibling. Additionally, it creates 100 more kg of aerodynamic downforce at 155 mph.

Some of the extra power and weight savings comes from a truncated exhaust system that pours the 600LT’s fiery breath straight out through the top of the engine cover, eliminating a bunch of tubing and contributing to an intoxicatingly exotic engine note. That’s a tough accomplishment for a car with a turbocharged engine, but the 600LT provides a suitably invigorating soundtrack to accompany its owners’ exploits.

The 600LT’s fixed rear wing (it doesn’t tilt to serve as an air brake like the 675LT’s wing) is directly in the literal line of fire of the exhaust, so the middle section above the openings is treated to survive the blast. I can’t see it during my daytime drive, but McLaren’s drivers assure me that actual flames are sometimes visible from the 600LT’s exhaust.

These ingredients combine to produce 0-60 mph acceleration of 2.8 seconds, matching the time of the Super Series 675LT, and a 204-mph top speed. At the dragstrip, the 600LT will complete the quarter mile in 10.4 seconds. But the 600LT’s speed secrets around a road course come from other sources.

In addition to those precise brakes, the 600LT has revised suspension geometry, stiffer springs, and killer Pirelli P Zero Trofeo R tires that combine to produce faster cornering speeds than the mighty 2016 675LT.

As with all McLarens, shifting 7-speed dual-clutch transmission is done automatically or using the steering wheel-mounted paddles. The computer chooses gears faultlessly, whether driving gently or when pressing to improve a lap time, but the paddle does give the driver the feeling they are contributing more to the effort.

The 600LT’s steering is modestly tweaked, with a ratio the company says is about 5 percent quicker than in the 570S, so the car turns in crisply without becoming abrupt and risking destabilizing itself.

In total, the 600LT is an ideal plaything for prolonged track driving, which is exactly the reason many McLaren drivers buy their cars. Indeed, its ability to tear around the track in 10-lap stints with virtually no performance decline makes the 600LT a “game changer” for the company’s Pure McLaren driving experience program, reports Danny Buxton, who leads the team of drivers that coach customers through the Pure McLaren events.

“We are going to see the biggest percentage of 600LTs on the track of any McLaren model,” Buxton predicts.

That sounds like as strong an endorsement of a super sports car as I can imagine.

McLaren provided travel and lodging for the Internet Brands Automotive contributor to bring you this firsthand report.