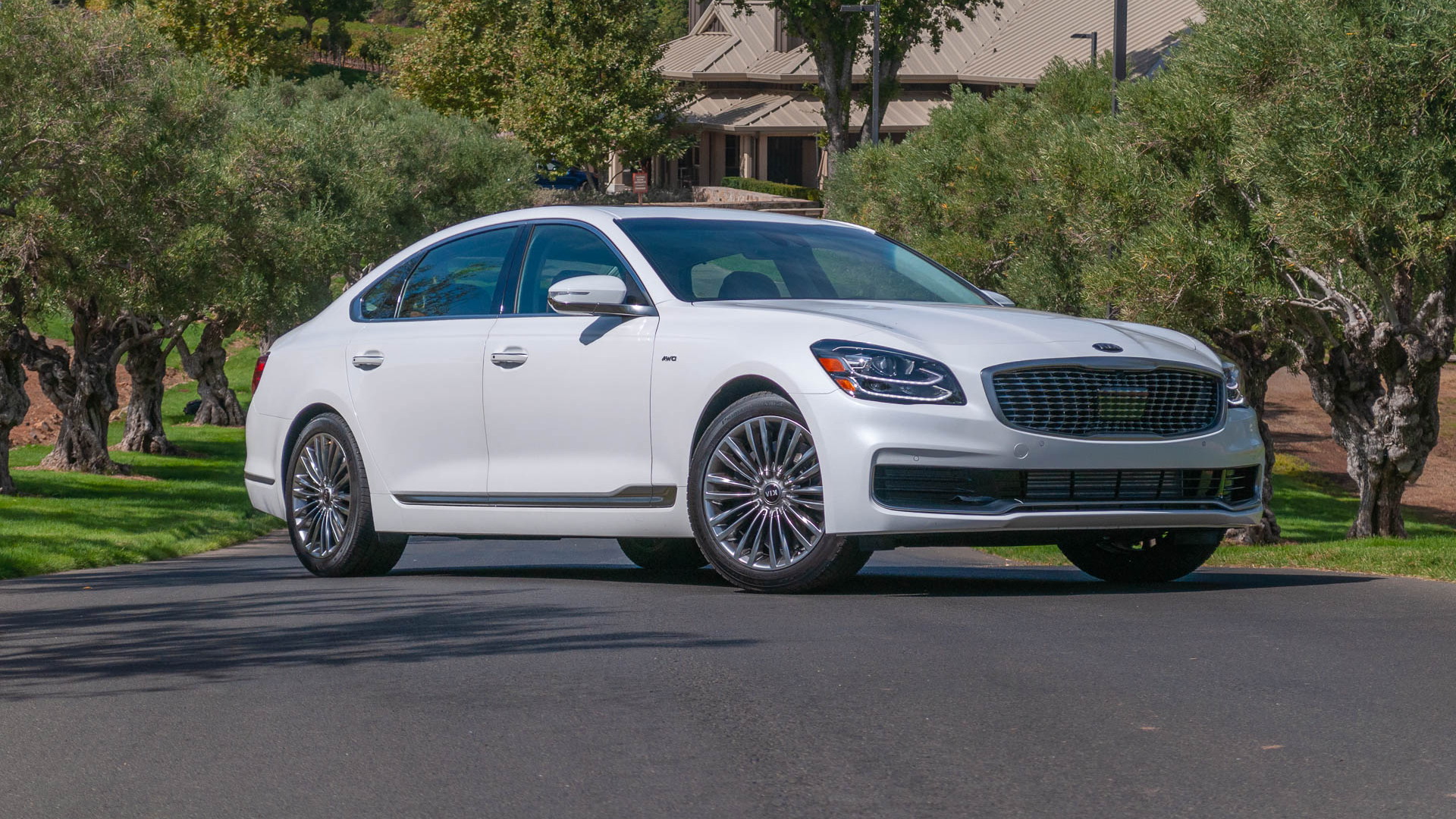 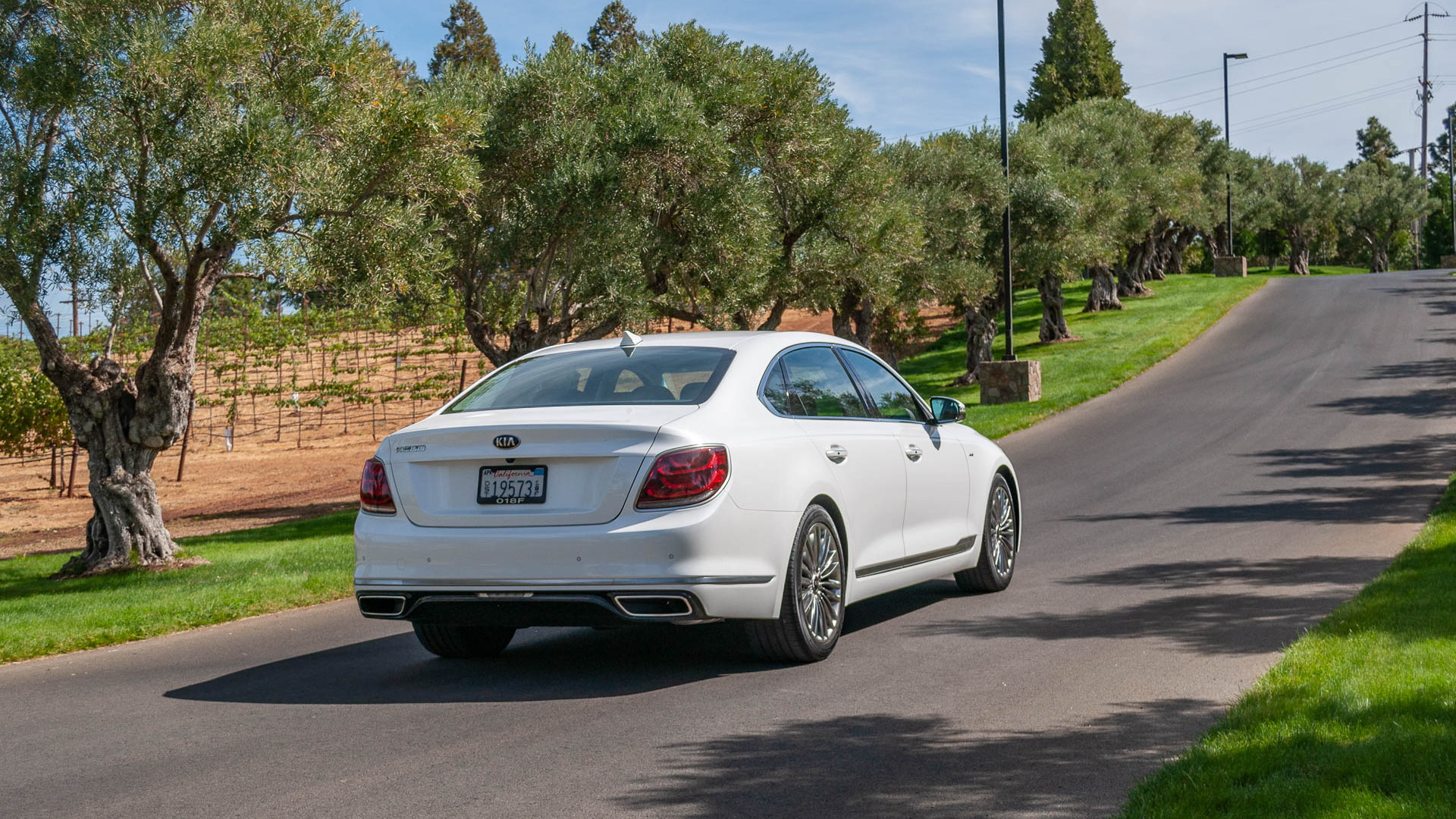 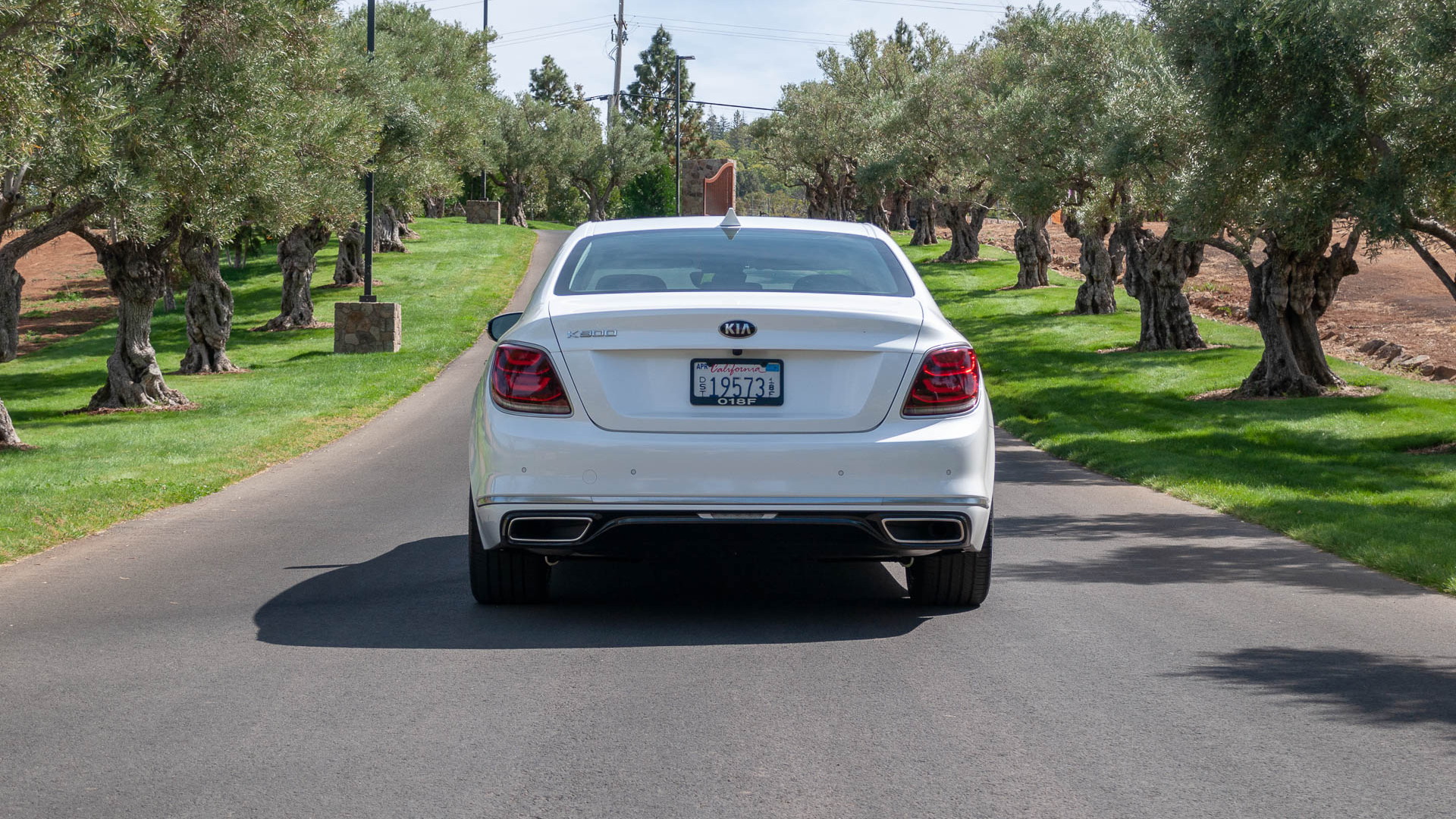 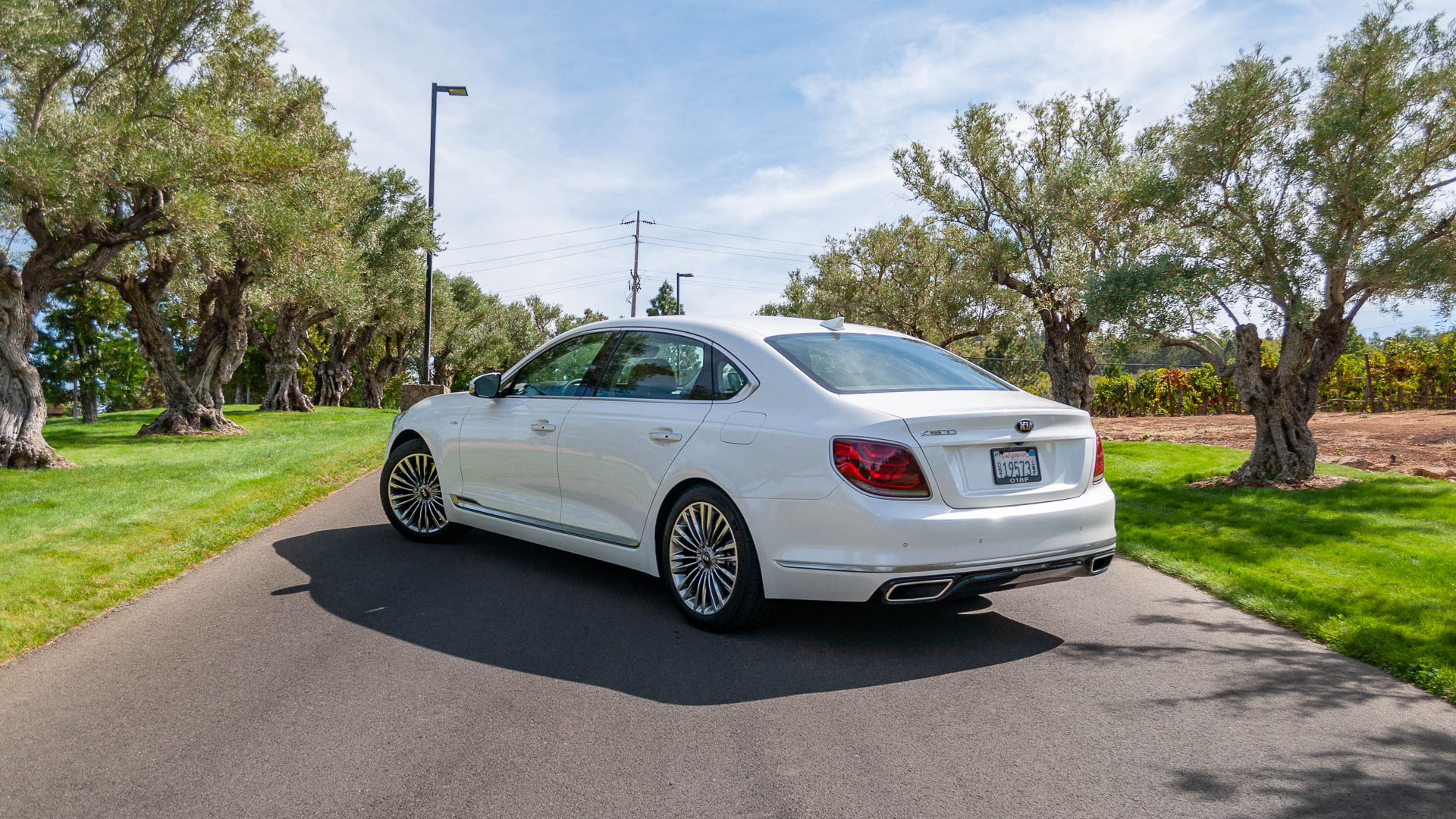 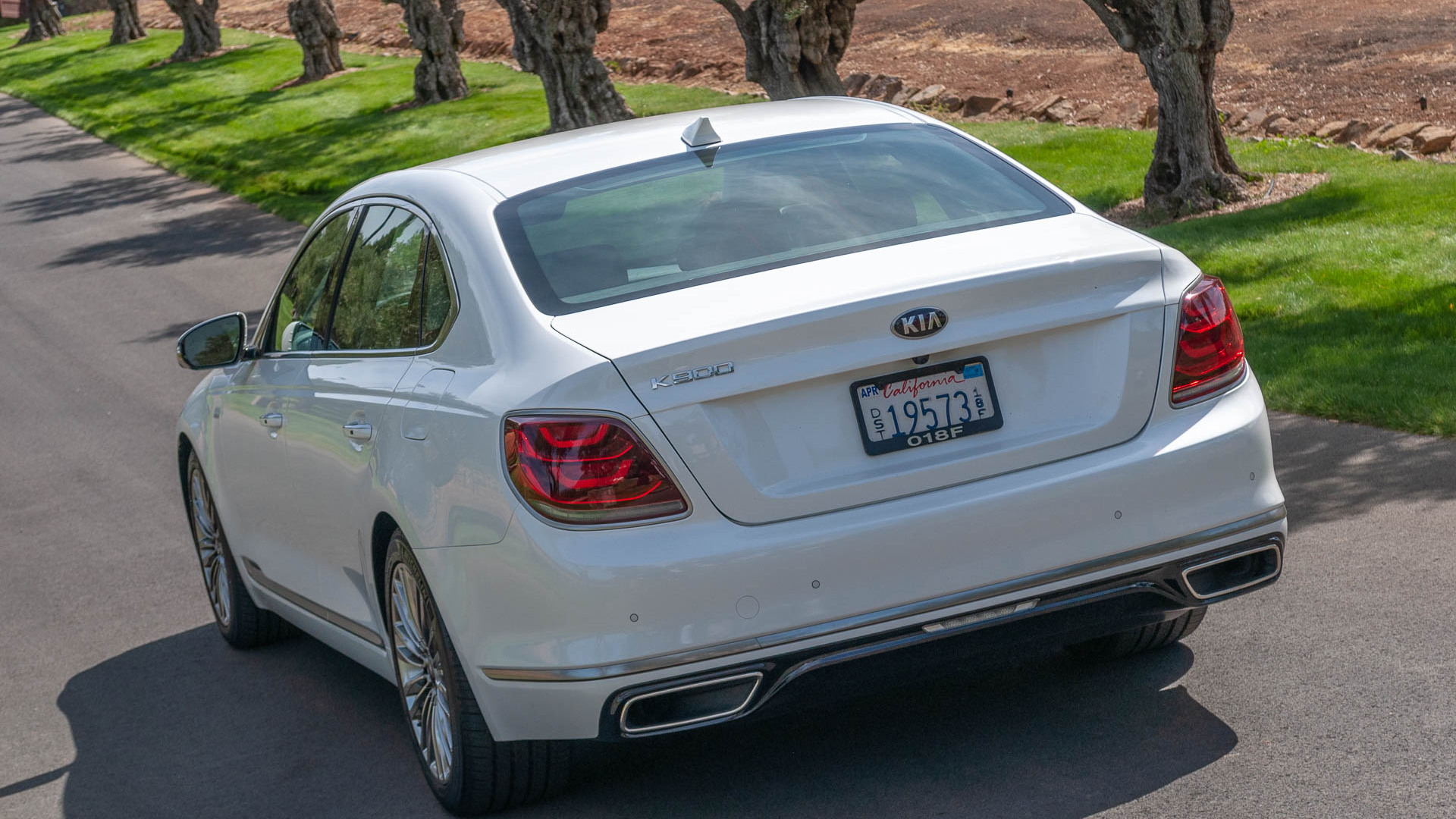 Stepping out of the Archer Hotel in Napa Valley’s morning light, it’s hard to remember the lineup of gleaming white and black cars aren’t German. They are South Korean Kias, and they are sharp.

The first-generation K900 was head-scratcher with a price starting in the $50,000 range and an available 5.0-liter V-8 it seemed out of place in the Kia showroom, but it introduced luxury features to the brand that have now moved to the rest of the lineup.

The second-generation 2019 K900 continues to introduce technology and features to the Korean automaker’s lineup that will trickle down over time, but it also injects a dose of sharp driving dynamics, courtesy of its little brother, the Stinger.

The 2019 K900 could easily be mistaken for European. The rear end recalls the Bentley Continental Flying Spur and the profile displays matte silver door trim that evokes the best cars from Germany. The front end isn’t quite as pretty; from the wrong angle, the new K900 has a fish face. Nobody’s perfect.

ALSO SEE: Living with the 2018 Kia Stinger GT: the good and the bad

Inside, the K900 could be mistaken for a BMW 5-Series. The available 12.3-inch digital gauge cluster, standard 12.3-inch tablet-like infotainment screen perched atop the dashboard, and substantial buttons and dials could all be backed by a Roundel instead of a red-and-black Kia badge. Those infotainment and climate controls are even easier to use than in most German luxury cars.

But it’s the details that are most impressive. The quilting on the nappa leather seats flares up as a nod to the outfits Korean monarchs wore. The dashboard seamlessly flows into the door panels—a hard feat to pull off no matter the price point—and all wood inside the cabin is real except for the piece on the steering wheel, as a Kia spokesman said was too hard to create a real piece with such intricate curves.

The first-generation K900 was soft, wallowy, and sloppy as it rolled down the road. The 2019 K900 corrects those issues. The new K900 shares the Stinger’s architecture, but it’s been stretched like Gumby in the hands of a child to be wider and longer. The new structure has 33 percent more torsional stiffness than the previous generation thanks to four times more hot stamped parts, and 676 feet of structural adhesives—a 140-percent increase.

The 5.0-liter V-8 option that was offered in 2018 is gone as it put too much weight up front with too little power gain, according to Kia. For 2019, all K900s are powered by the Stinger’s twin-turbocharged 3.3-liter V-6. It sends 365 horsepower and 376 pound-feet of torque to all four wheels via an 8-speed automatic transmission. The setup is good for a 0 to 60 mph sprint of just 5.7 seconds, according to Kia. That’s a second slower than the smaller Stinger, but still quick, and my butt dyno says that number feels right. The new powertrain delivers EPA ratings of 18 mpg city, 25 mpg highway, and 21 mpg combined.

Gliding around town in Comfort mode, the K900 is Lexus quiet while the twin-turbo V-6 and 8-speed automatic provide progressive throttle response and more than enough power. Leisurely driving around town and in the Napa backcountry return 26.3 mpg, according to the trip computer.

It’s when the road gets twisty and my right foot gets antsy that things become interesting. Shift the drive mode selector to Sport and the K900 acts like it drank a Red Bull. The steering adds weight, the active suspension firms up, the throttle becomes jumpy, shift points and electronic stability control limits rise higher, and the digital gauge cluster drops the analog look for digital readouts. All the while the sporty side bolsters give front seat occupants a big hug.

On Napa’s tight, twisty back roads, the K900 is happy to be pushed into corners. That’s not to say the car is a featherweight. It isn’t. Its 4,650 pounds can be felt as the body rolls predictably around a corner. But the staggered 19-inch Michelin MXM4 all-season touring tires hold their grip with respectable tenacity as the all-wheel-drive system’s electronically controlled clutch shifts power front to back and the electronic stability control applies the brakes to induce torque vectoring at the rear. It all lets the car carry more speed around corners it than it should be able to.

Beyond that, however, some flaws show through. Kia provides paddle shifters, but even in Sport mode the transmission denies downshifts when it should allow them, refuses to hold a gear when it should, and lacks a full-manual mode.

On a long, straight stretch of undulating pavement the suspension is too firm in Sport mode and the entire structure becomes unsettled at speed, but Comfort mode is too forgiving when pushing the car on smooth pavement. The Custom setting solves these issues as it allows me to pick and choose how to set the vehicle parameters, but there’s only one Custom mode, and that isn’t going to be a one-size-fits-all solution.

Like the first-generation K900, the 2019 model introduces new safety technology to the brand. Foremost is Lane Follow Assist, which is similar to Volvo’s Pilot Assist as it’s a Level 2 semi-autonomous driving feature. Using the front radar sensors and side mirror-mounted cameras, the system reads lane markings and uses the electric-assist power steering to keep the car centered in its lane, even around curves...theoretically. In my testing, it fails to read lane markings consistently, won’t center the car within its lane, and instead continually bounces between lane markings. I’ll wait for more real-world time behind the wheel to determine whether it’s the system or these roads.

A new blind-spot view monitor system is standard on the K900. It’s similar to Honda’s side-view camera system, only it works on both sides of the car whereas Honda’s system only works on the passenger side. Activating the turn signal sends a live video feed from the side mirror-mounted cameras to the digital gauge cluster. The left signal replaces the speedometer and the right signal replaces the tachometer with the video feed. This isn’t in place of blind-spot monitors like Honda’s system; it’s in addition to.

Other new safety tech includes a steering wheel that provides haptic feedback alerts in the event of an unsafe lane change, rear cross-traffic collision avoidance, and Safe Exit, which alerts the driver or front passenger if the mirror-mounted cameras detect a vehicle or bicyclist approaching the K900 when opening the doors to exit.

Pricing isn’t set in stone, but when the 2019 K900 hits select dealerships by the end of 2018 it should start from about $60,000. That will bring such features as LED headlights and taillights, the 12.3-inch touchscreen infotainment system with Apple CarPlay and Android Auto, a 7.0-inch color digital instrument display, a 20-way power driver’s seat, a 900-watt Lexicon audio system, a head-up display, and a full suite of active safety features.

Kia only sold about 500 K900s in 2017, and a Kia spokesman told Motor Authority it expects to reasonably double that number with the new 2019 model.

After a first taste of the 2019 K900 in and around Napa it’s clear that Kia’s doubled down on its flagship. It strikes a rich balance of driving dynamics from the Stinger with softer, more luxurious tone. Maybe that will help it better compete with the European luxury sedans that it so closely resembles.

Kia flew us to Napa and offered us wine after showing us expensive, gorgeous, classic Chris-Craft boats after driving the 2019 K900.