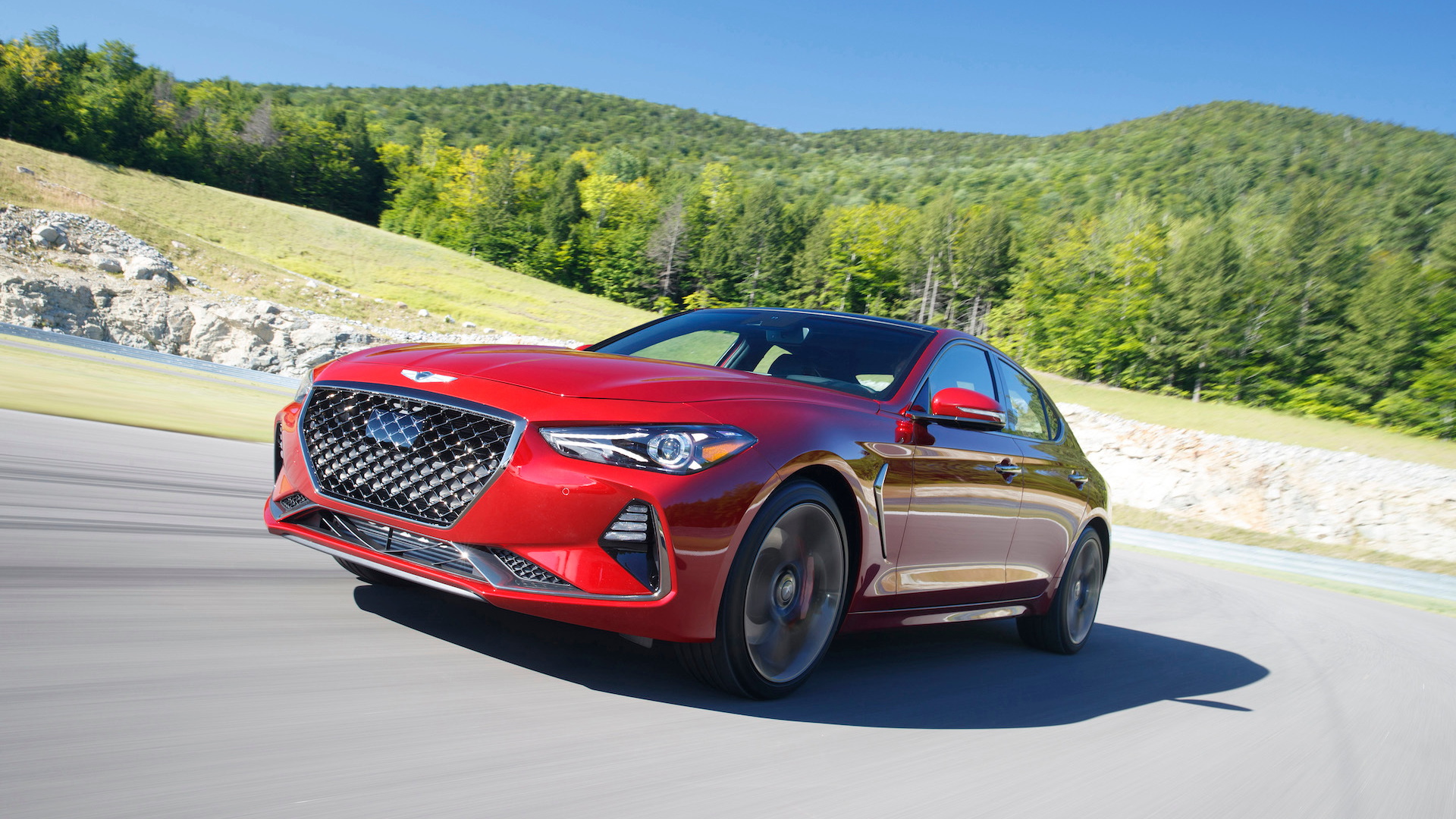 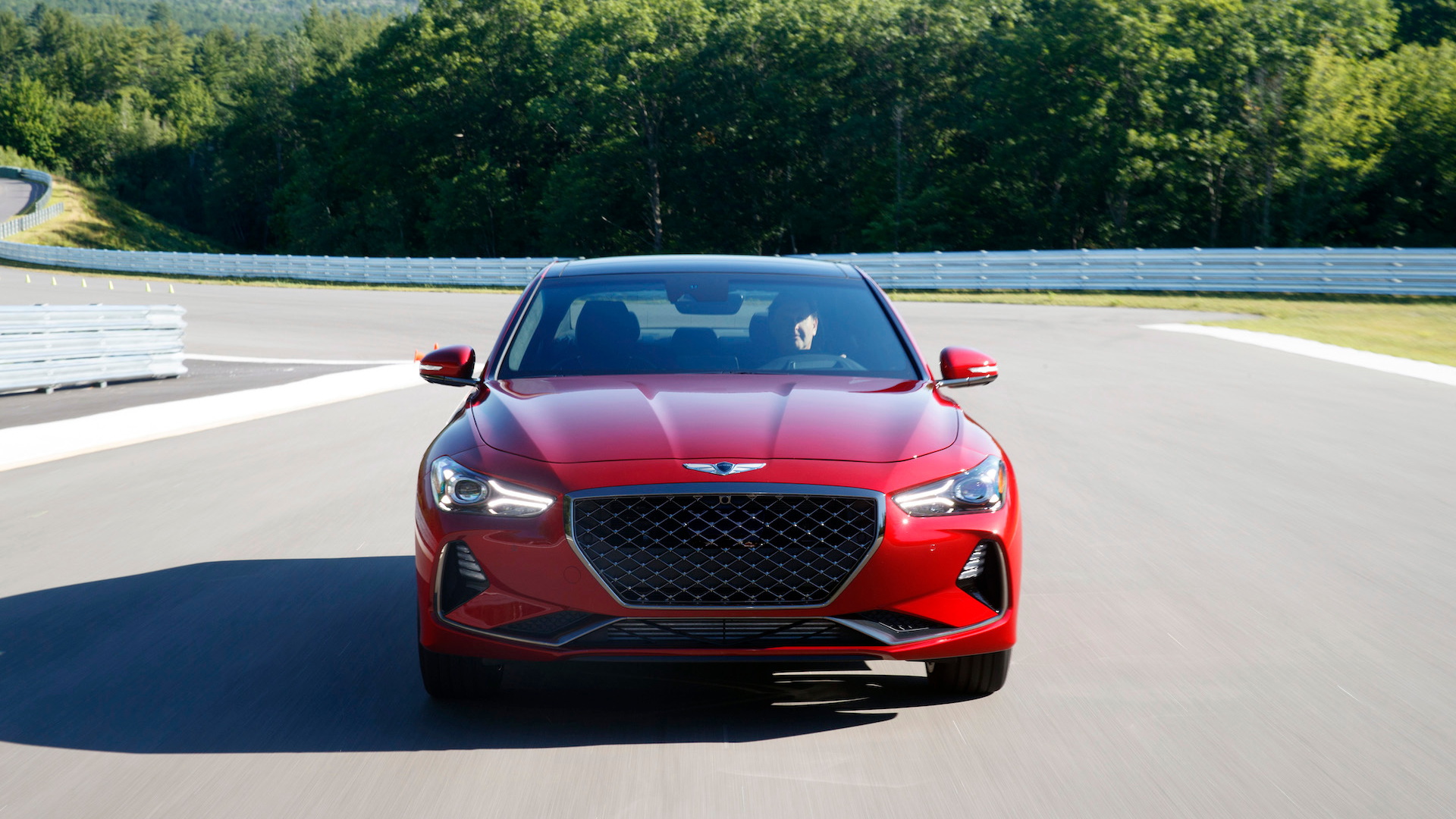 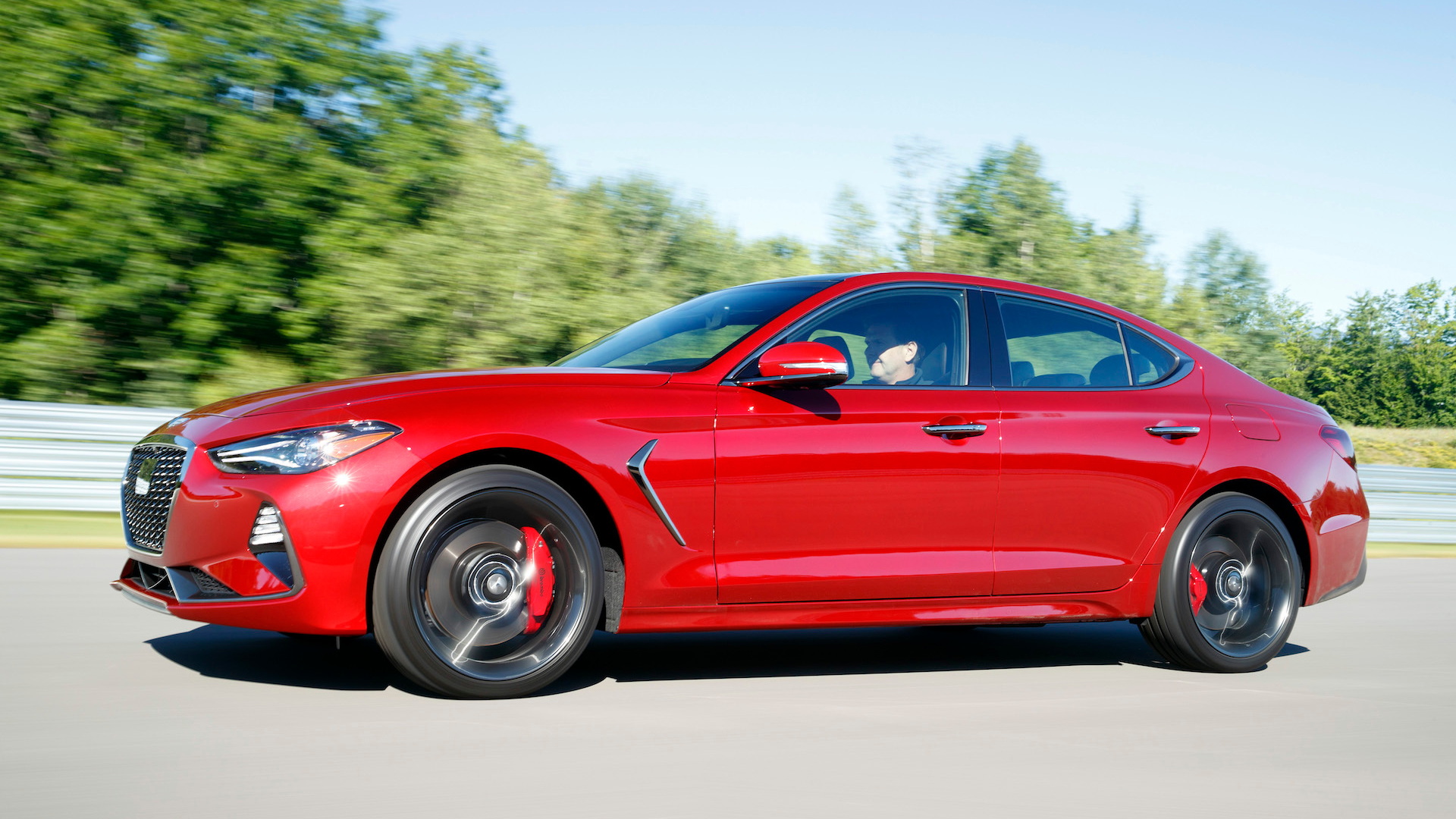 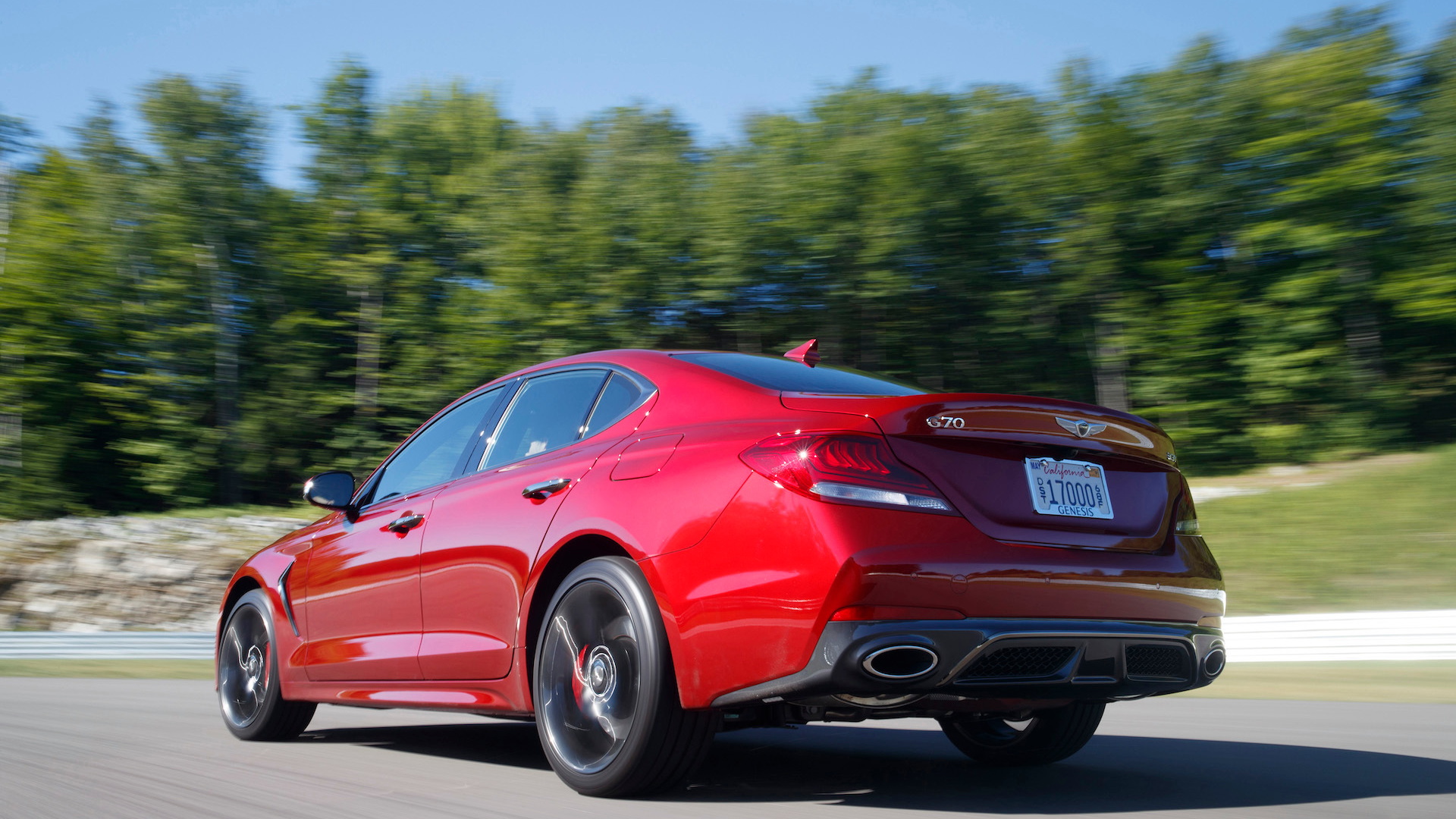 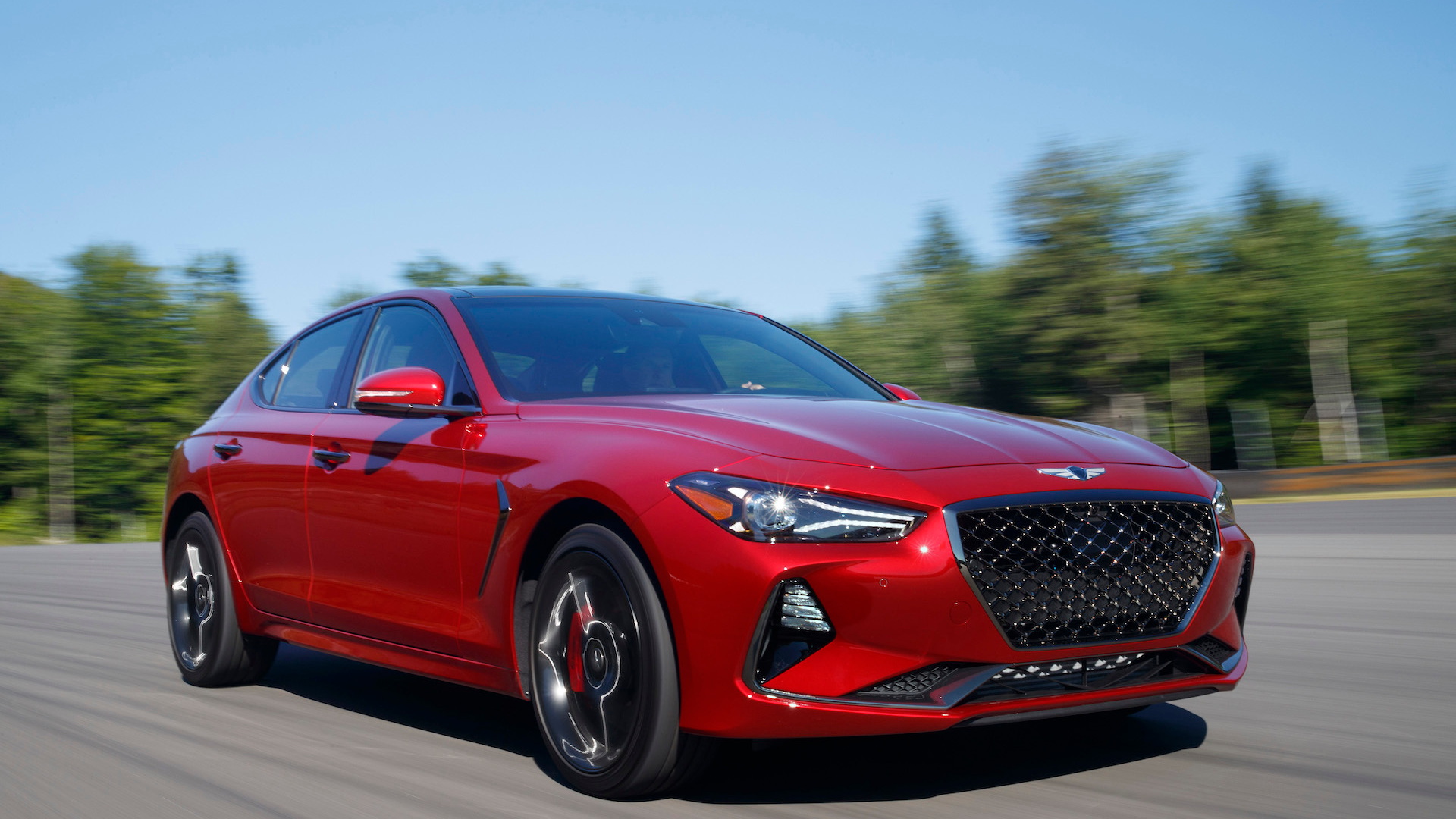 While I wait for my turn to attack the track at Tamworth, New Hampshire’s Club Motorsports in the 2019 Genesis G70, I notice some of the car’s details. The diamond-quilted nappa leather upholstery looks like it was sourced from a Mercedes-Benz S-Class. I shut off the traction control and turn the driver selector to Sport mode; its knurled metal dial clearly comes from the Bentley playbook. I grip the small-diameter steering wheel and realize it would look right at home in a Miata. This car mixes fine luxury and thoughtful sporty touches.

With the G70, Genesis appears to have to brewed the sport sedan mix just right.

The G70 sedan is the kissing cousin of the Kia Stinger hatchback. The cars share engines and their architecture, but the G70 is 5.8 inches shorter on a 2.8-inch shorter wheelbase, and it weighs between 55 and 123 pounds less, depending on the model. Genesis makes strategic use of aluminum, though, using it for the hood, front bumper beam, rear differential housing, and the components of the front MacPherson strut and rear five-link suspension. The aluminum in the suspension saves unsprung weight, which is always a boon to ride and handling.

The Stinger has proven to be a capable but somewhat compromised car on the track, and an exceptionally comfortable and roomy car on the street. I had hoped for a little more track focus in the Kia Stinger, and it fell short. Maybe the G70 can deliver.

Go with the flow

The lead car heads out, and three of us follow onto the scenic 15-turn, 2.5-mile track, a flowing road course without tight switchbacks or close esses. Club Motorsports is only a year old, and it will no doubt soon get a reputation as one of the most beautiful tracks in the U.S. Set into the side of a mountain, it has 250 feet of elevation change, which should prove a challenge for the brakes in downhill corners.

Right away the on-center stability of the rack-mounted electric assist power steering becomes apparent, as does its weight, which I like but might be too heavy for some. The G70 flows gracefully from turn to turn, its 225/40R19 front and 255/35R19 rear Michelins singing far before they will lose grip. With my window down, I can hear the tires of the car in front of me, and it reminds me to trail-brake deeper into the corners. The car reacts well to that extra bit of light brake pressure, tucking in its nose to cut a sharper line through turns. It means my tires don’t sing as often, and it lets me get back on the power earlier to build more speed in the straights.

In a few of the more acutely angled turns, this rear-drive, 365-horsepower thoroughbred is willing kick out its tail when provoked by an early stab of the throttle, but those rear tires don’t actively try to swap places with the fronts.

The twin-turbo 3.3-liter V-6 adds to the track experience. It’s a strong engine that sounds an edgy howl when provoked but otherwise remains in the background. A heartbeat of turbo lag means I can ease into the throttle just before each apex because power will come on just before track out. Peak horsepower arrives late at 6,000 rpm, but the 376 pound-feet of torque max out at a low 1,300 rpm and stay on boil to 4,500 rpm.

All that torque teams with a mechanical limited-slip differential to send the G70 rocketing down the straights. Genesis quotes a 0-60 mph time of 4.5 seconds, and my butt dyno seems to confirm that time. The ready torque is also the reason the G70 can drift when the stability control is shut off (yes, unlike most automakers, Genesis lets drivers shut off stability control completely).

The 8-speed automatic transmission provides responsive shifts and rev matching makes for smooth downshifts entering corners. However, it doesn’t hold onto gears like a baby with a blanket like many sport sedans that offer Sport Plus modes. That’s something Genesis might want to consider.

Through these flowing, not-too-tight turns, the G70 is balanced and predictable. That’s an improvement from the Stinger, which is prone to corner-entry understeer and corner-exit oversteer. The shorter wheelbase, lighter weight, and stiffer suspension may have cured the Stinger’s track woes.

My session ends and I move on to an all-wheel-drive 3.3T with the Sport package. It has Pilot Sport 4 tires with a tad less grip. Its AWD system can send up to half the power to the front or all the power to the rear, but in these conditions it’s running with 90 percent of the power to the rear wheels most of the time. The lead car this time is a 2.0-liter turbo-4, which comes with the Pilot Sport 4s and Brembos but is down 123 horsepower. The turbo-6 wants to eat that car for lunch in the straights.

In the corners, however, I notice a couple differences between the AWD and rear-drive G70s. In this AWD car, the rear end isn’t as willing to come out in turns, and the tires sing their song a bit sooner, but they don’t give up grip as easily as they do under the Kia Stinger. A Michelin rep told me the tire compound is basically the same, so the G70 puts its grip to the road better. That, or the weight savings helps.

In both cars, the Brembo brakes offer a firm pedal and strong stopping power, at least during the first run of the day. I’m a thorough sort, though, so I stick around until the end of the day for another run in an AWD car, and find the brakes have lasted through a good four hours of track time without fading or pulsating.

Next, it’s on to the autocross, and two cars are available here. I start in a 2.0T with a manual transmission, thinking Genesis has chosen this track because the G70 is much like the Stinger: good in sweepers, but not when the turns get tight.

The autocross proves me wrong. The turbo-4 lacks the gusto of the V-6, but the G70 charges into turns, its brakes gather its weight, and it rotates willingly when I keep the nose down. The Stinger would be a handful on this tight go-kart track, but the G70 plays well here.

Even the base Sport model feels firm over bumpy pavement. The rear suspension makes hollow, bobbling sounds as it encounters bumps, and the tires howl on the coarsest Maine and New Hampshire country roads. The Stinger offers a much smoother ride, while the Germans would provide better isolation from bumps and road and suspension noise while offering as much or more sportiness.

The G70 also can’t match its Stinger cousin for interior space. The rear seat has less leg room, while foot space underneath the front seats is taken up by amplifiers in all but the base model. While the G70’s trunk is rather small with just 10.5 cubic feet of cargo space, the Stinger’s rear hatch offers a spacious 23.3 cubic feet of storage, and that can be expanded to a crossover-like 40.9 cubic feet with the rear seats folded down. In terms of interior materials and fit and finish, however, the G70 outshines the Stinger, and that car is no slouch.

Genesis and Kia both offer excellent cars and each compliments the other. While the Stinger delivers grand touring sportiness with plenty of on-road comfort and lots of room for passengers and their stuff, the G70 hits closer to the European sport sedan mark. It’s closer in size and mission, with the sporty feel of a Euro-tuned sport sedan and more track chops, but it won’t be as useful for those who need to carry people.

The G70 is also a little more upscale inside, and it should cost a few thousand more when it goes on sale this summer. Pricing hasn’t been announced yet, but Genesis reps said the G70 should start in the mid-$30,000 range and extend up to $50,000 to start. Bottom line: Genesis has mixed all the details together in the G70 to brew up one formidable sport sedan.

Genesis paid for airfare and lodging for Internet Brand Automotive to bring you this first-hand report.