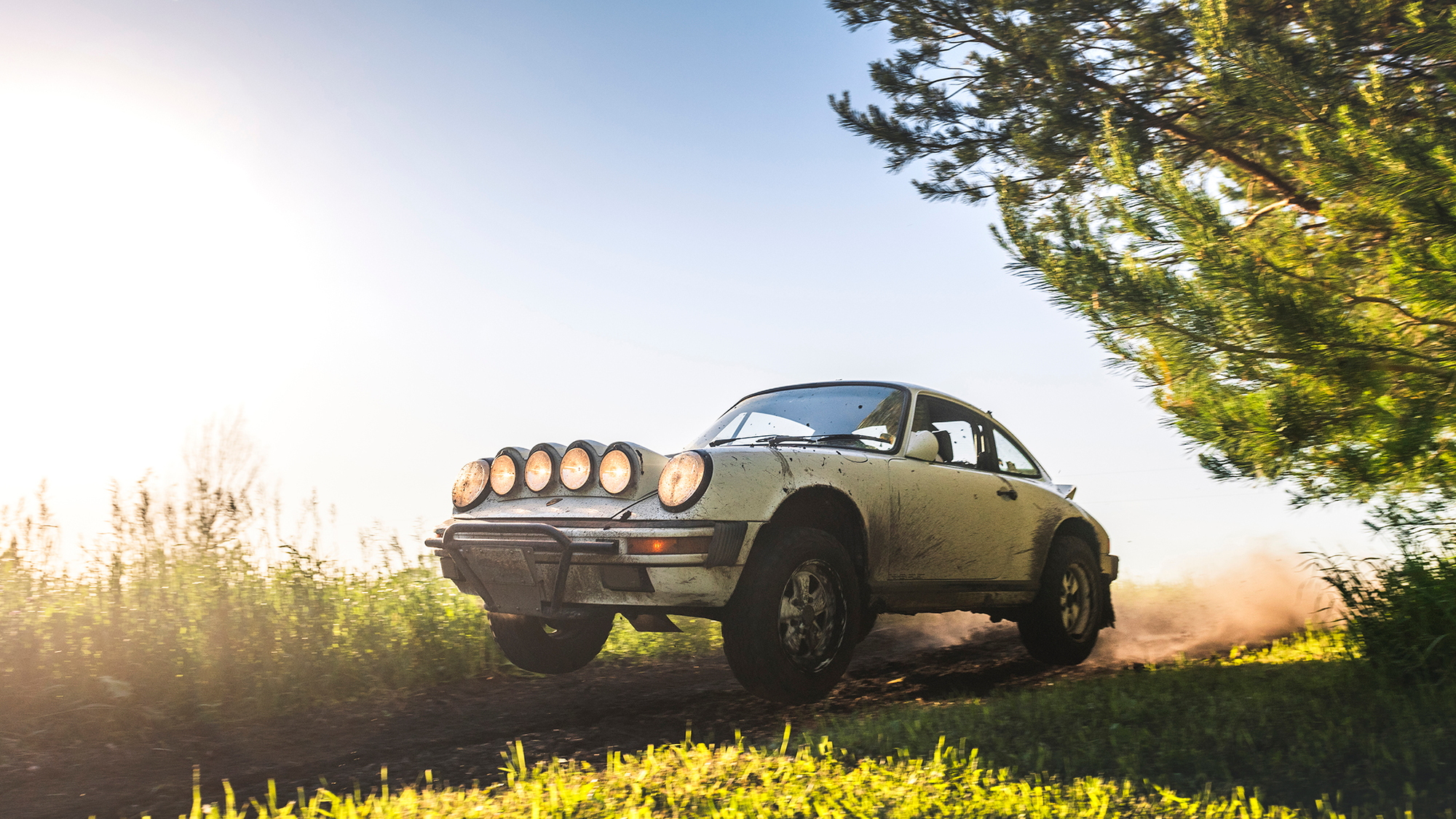 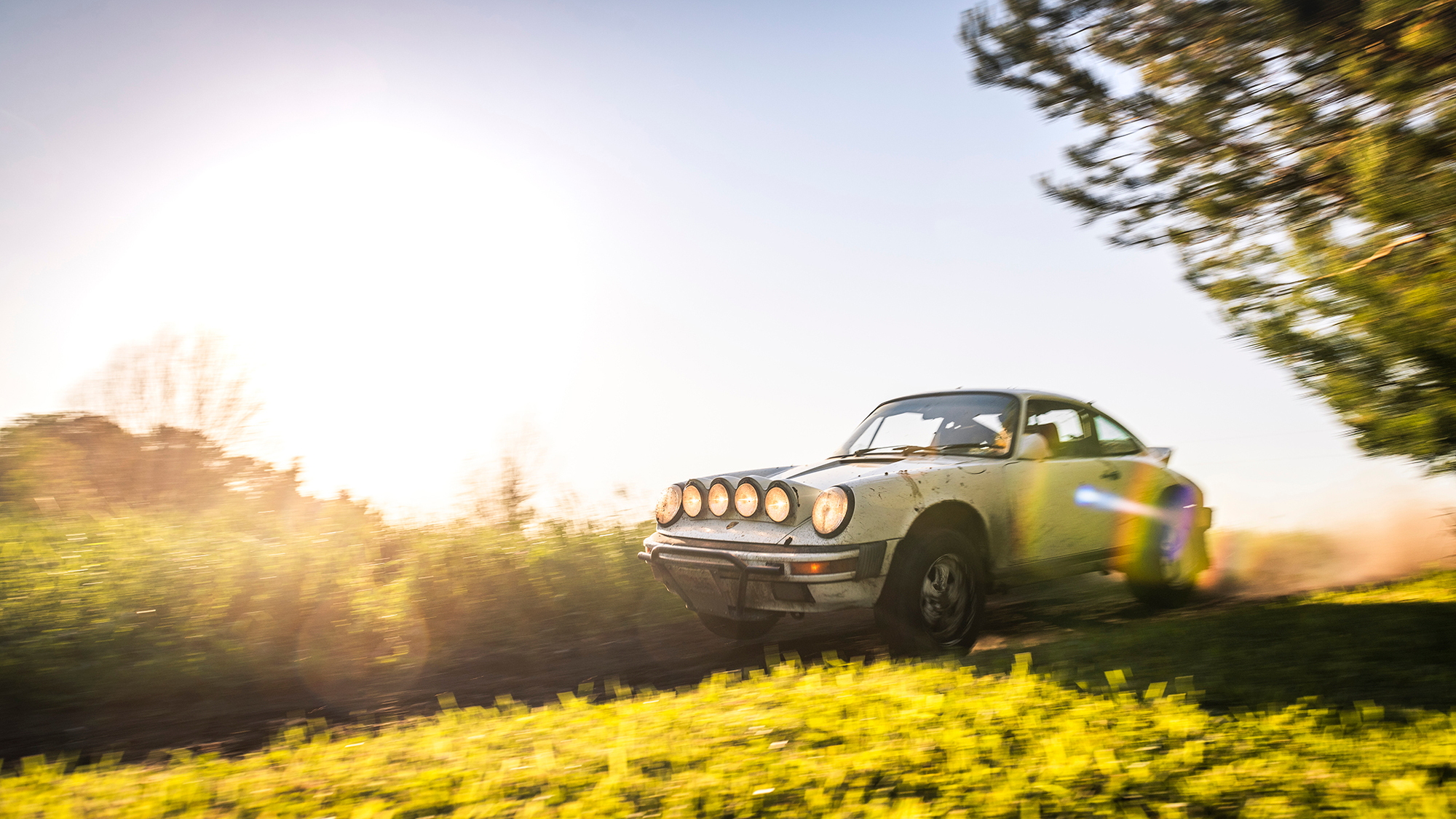 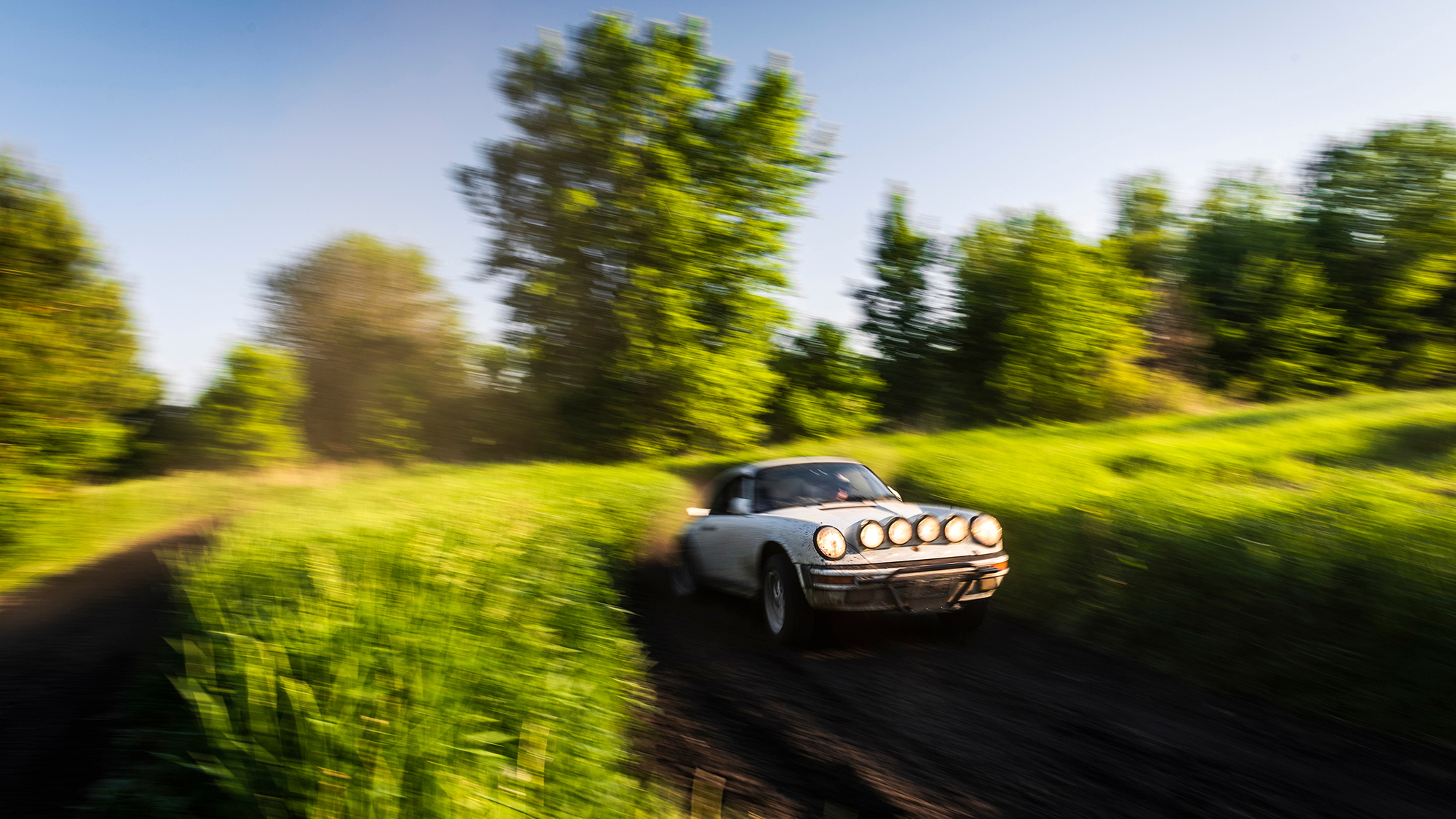 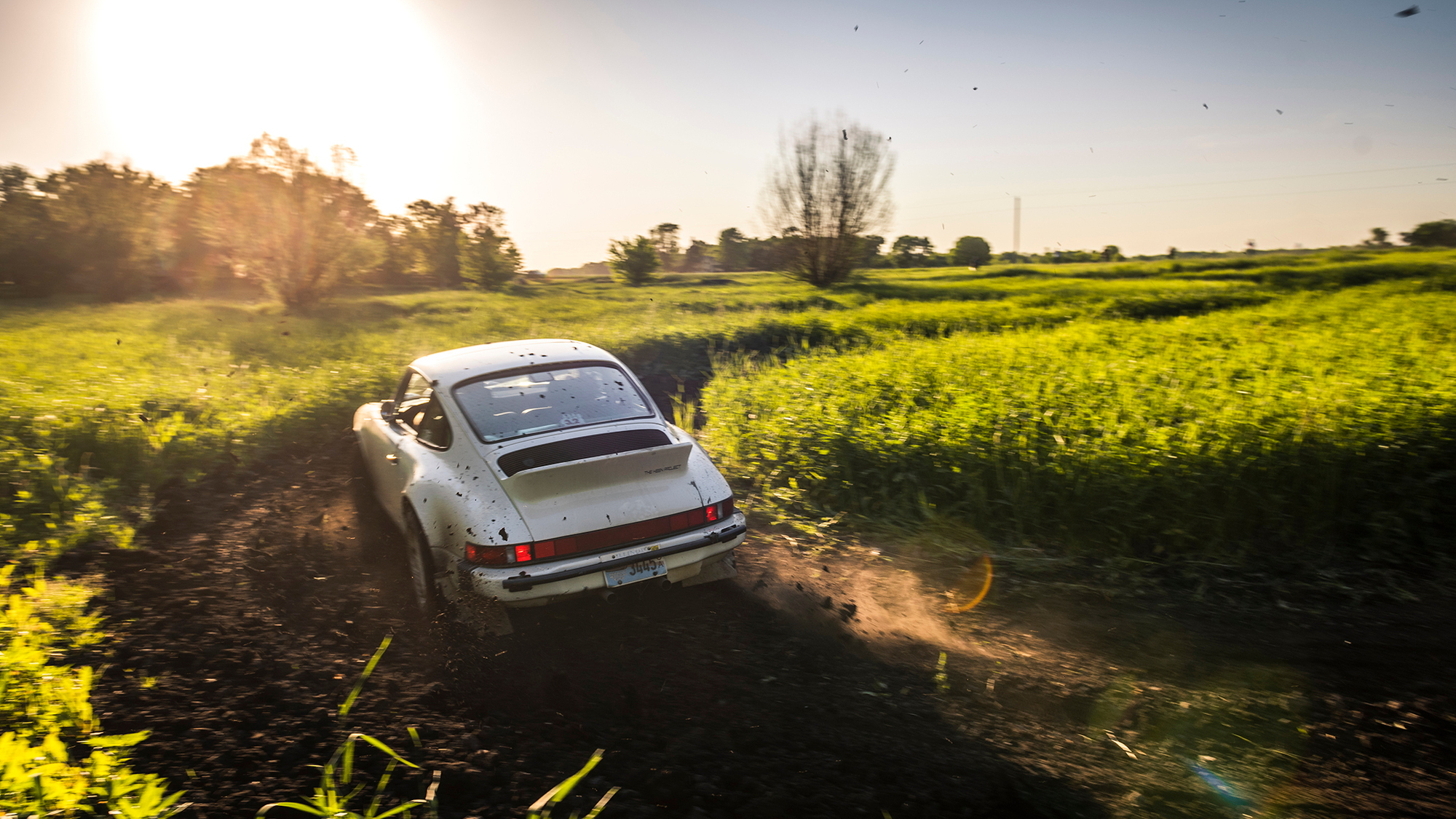 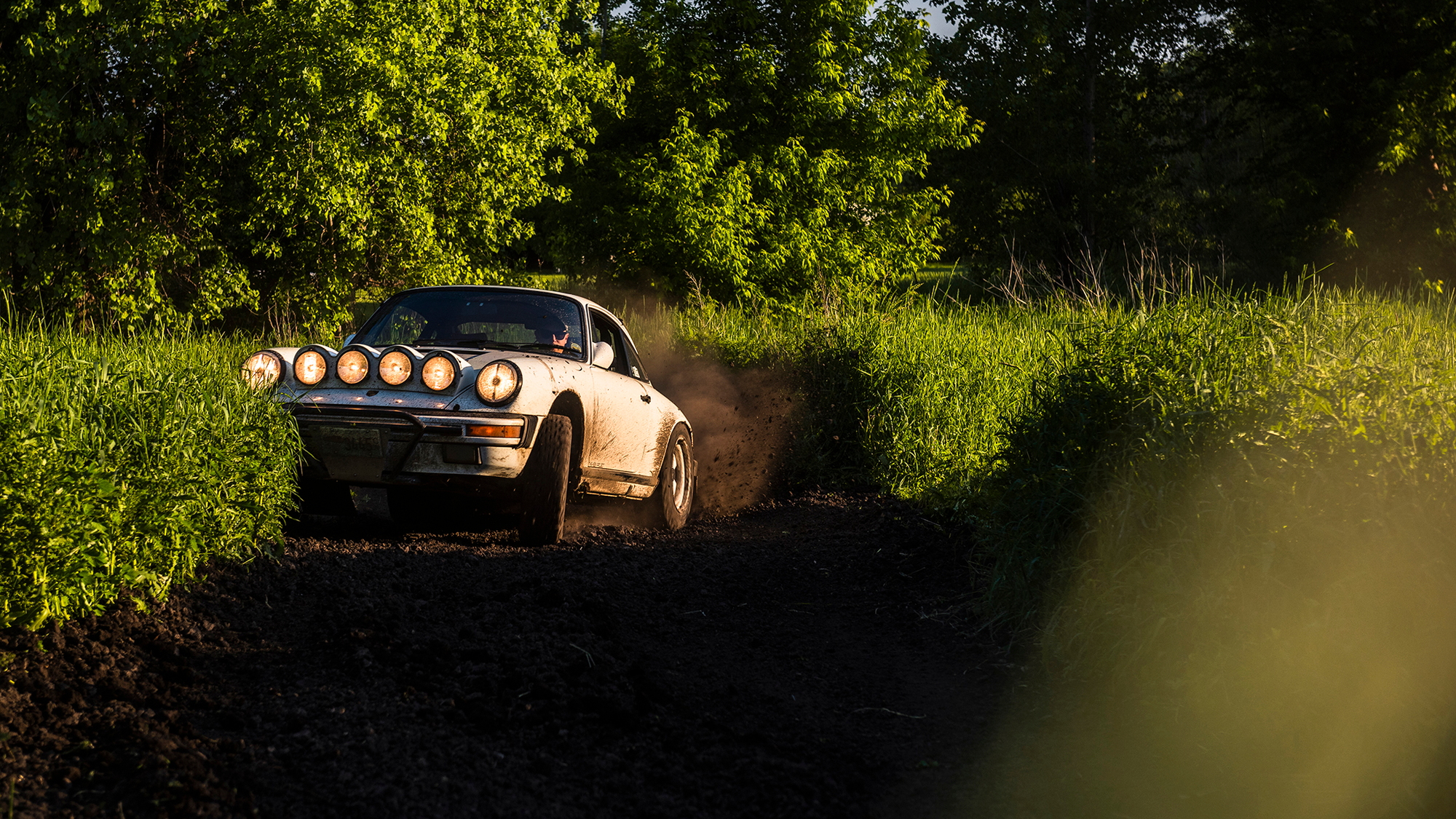 Chad was running late, and we were already pressed for time. This entire plan was rushed and slapped together via a phone call and a few text messages over the weekend.

The Keen Project Safari 911 build No. 2 by former race car driver Lehman Keen was in Minneapolis for a short time to celebrate Porsche’s 70th birthday. As soon as I saw that my friends Chad and Luis had the car in town, I needed a stint behind the wheel.

Chad called back moments later and screamed over the wail of the special 911's flat-6 engine.

“Traffic. Road’s closed. Rerouting. Be there in a few minutes.”

Soon after, I heard the wail myself as the car entered Watertown, Minnesota. I turned to see my new highlight of the week: a white 1989 Porsche 911 Safari with driving lights ablaze in broad daylight.

Chad got out of the car wearing a blue sport coat, white dress shirt, sunglasses, jeans, and dress shoes—business casual exiting a rally fighter built for desert duty, and the irony was still perfect. He tossed me the keys after pleasantries. It was time to drive.

I opened the driver’s door with a loud click as I engaged the handle, plopped into the blue leather and plaid-covered race seat, and closed my eyes. Instantly my nostrils were filled with the musk of vintage German leather, plastic, carpet, and vinyl. My mind wandered back to my 1991 E34 M5— once again the regret of selling it burned, but didn’t last long.

“Are you ready for this?” Chad asked.

“Hell yes,” I said without thinking.

A quick turn of the key on the left-side of the dashboard—because this is a Porsche—and approximately 230 healthy horsepower from the chipped 3.2-liter flat-6 erupted to life. It was smooth, angry, and just waiting for me to give it the juice.

As we snaked our way across blacktop heading toward some county dirt roads, I was amazed at how quiet the 215/65 R16 KO2 tires were at 60 mph. The 4.0-inch lift combined with the beefy all-terrain tires soaked up any road imperfections, but a creaking noise emanated from the rear suspension.

Chad told me those squeaks were the poly bushings, and I later learned from Keen that newer builds have poly bronze bushings that feature bronze inserts with serviceable grease, but the owner of this car doesn’t want to give the car up to have them installed.

When the rear KO2s hit the gravel road I buried the throttle. The tach instantly jumped as the flat-6 came alive, and revved all the way out to its 6,500 rpm redline before I grabbed the black wiffle ball shifter and threw the tight G50 gearbox into third gear.

I looked down and asked Chad how accurate the speedometer was.

We hit 80 mph without effort. I began laughing, maniacally.

The flat-6 wailed as we blasted around the country dirt roads between 60 and 80 mph. Each time I approached a corner, I braked hard, cranked the wheel, waited for the rear end to settle, goosed the throttle, and the rear end kicked out as I dialed in countersteer and floored the accelerator. Gravel and dirt goes flying and Chad laughed: “Yeah, alright, you understand how to drive an air-cooled Porsche.”

This scene repeated for the next 40 minutes with laughter and smiles.

Finally, the white Safari 911 was heading toward blacktop again and I began to back off the throttle.

We flew onto the blacktop at speed and the car didn’t flinch.

“That’s the beauty of this thing. It’s happy with whatever,” he said.

We headed over to another gravel road that went around Lake Waconia, but we took it slower with a neighborhood on one side and the lake on another. As I cruised along it dawned on me: You would never ever do this with a non-Safari 911, and definitely not with a RWB or Singer 911.

As we snaked our way back from farm country back into Watertown, I took mental pictures of the interior. The two metal switches on the dashboard to control the four driving lights up front, the black metal wiffle ball shifter, the blue carpet where the rear seat should be, the blue leather on the race seats, and the most amazing blue plaid cloth on the door, dash, and seats I had ever seen. This is what the ultimate 911 that you can drive anywhere looks like.

The build list reads like something out of a true Porsche enthusiast’s fantasy. Some aficionados may scoff at The Keen Project Safari, but that’s ridiculous. Porsche has a rich history running this generation 911 in the East African Safari and Dakar.

All The Keen Project Safaris get a light pod up front with two wide-beam lights and two pencil driving lights, bumper bars, shaved mirrors, which are nearly useless in real driving but boy they look cool, mud flaps, and ride on 215/65 R16 BFGoodrich KO2s.

Inside each has the wiffle ball shifter and a Momo Prototipo steering wheel along with wild, retro upholstery that Keen and the owner choose together.

The suspension features long-travel shocks, upgraded torsion bars and modified upright that gives it the 4.0-inch lift from European ride height, a coilover setup, (911 Turbo) tie rods, racing camber plates and racing ball joints finished with poly bronze bushings slathered in waterproof grease (though this car, build No. 2, doesn’t have the these).

Keen didn’t create The Keen Project as a movement or a business; he simply wanted to make it so he could bomb around downtown Atlanta or blast through a national forest without worrying about his red 1981 Porsche 911 SC. From there, it snowballed as friends and others saw his Safari 911 and demanded he built them one.

The entire thing costs about $100,000 (that includes the donor car), which is a lot of money, but Keen is quick to point out “in the Porsche world for a full build, it’s not a lot of money.”

Buy a Singer, RWB, or any off the shelf RS or GT3 from the Porsche showroom and you’ll enjoy taking it to the track, driving it around town, and hitting up the local cars and coffee.

For those that want more, need more or demand more, The Keen Project Safari 911 is a time machine that bombs around the woods, blasts through the mud, then rolls into cars and coffee and stops the crowd dead in their tracks.