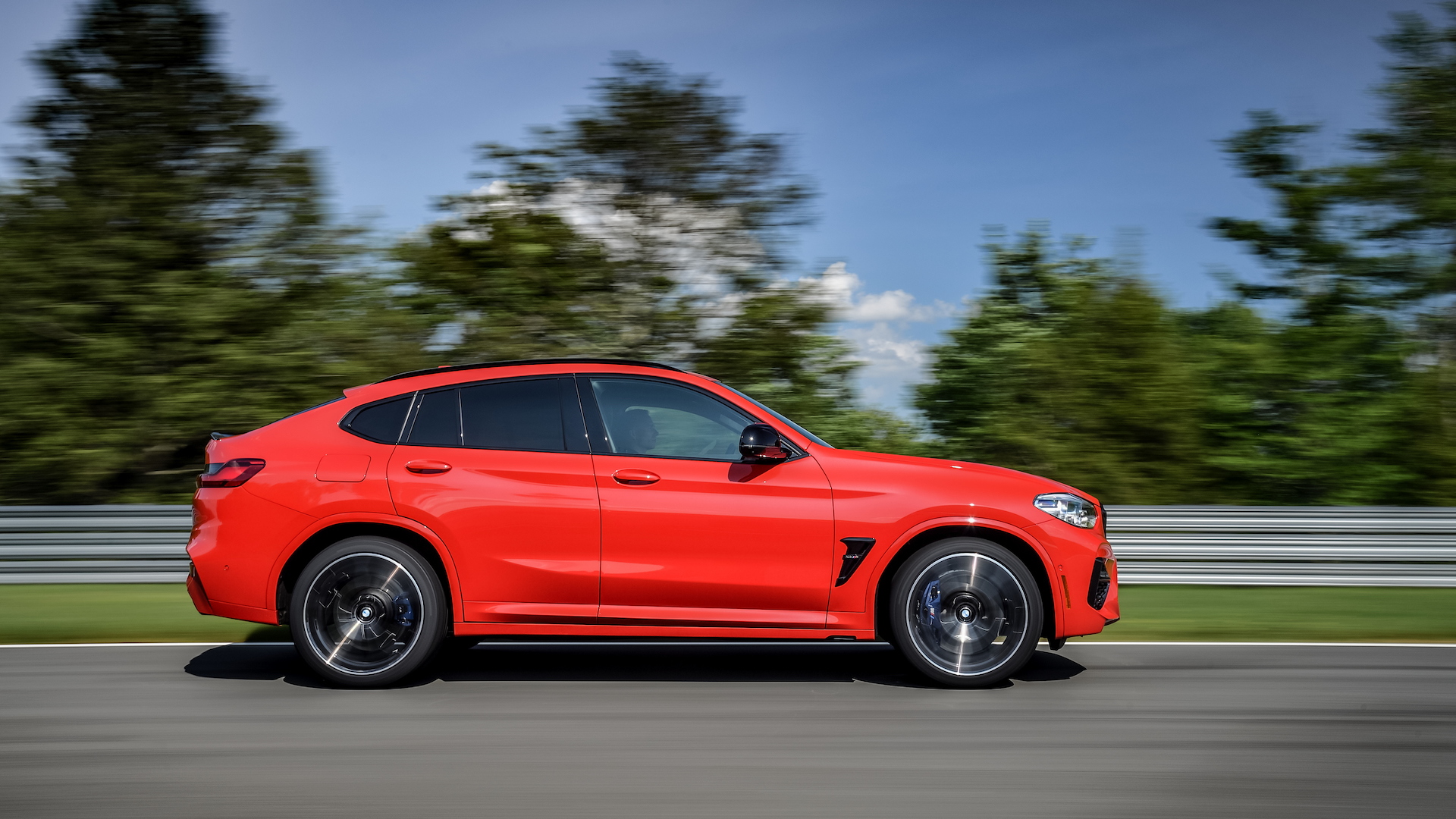 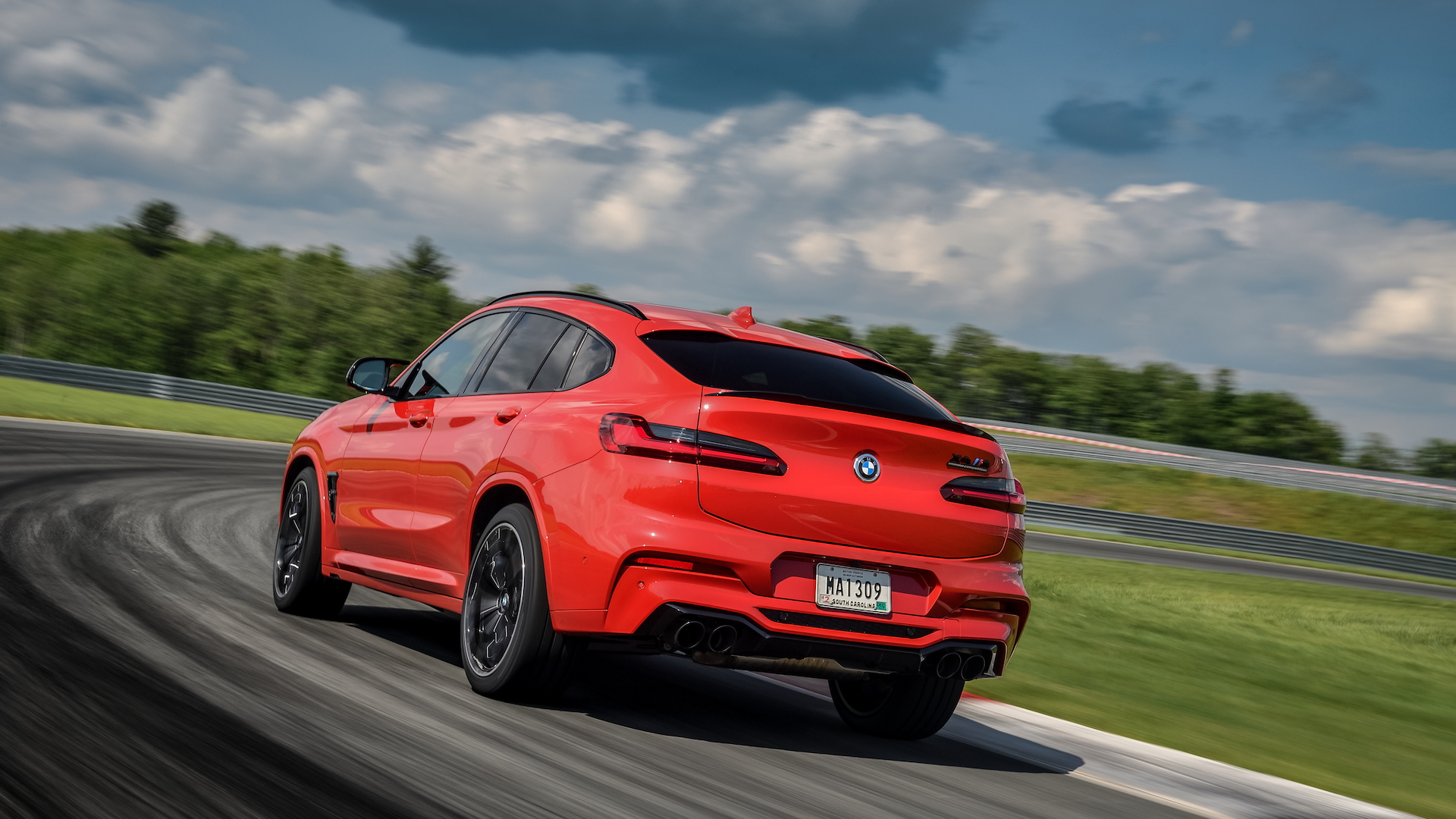 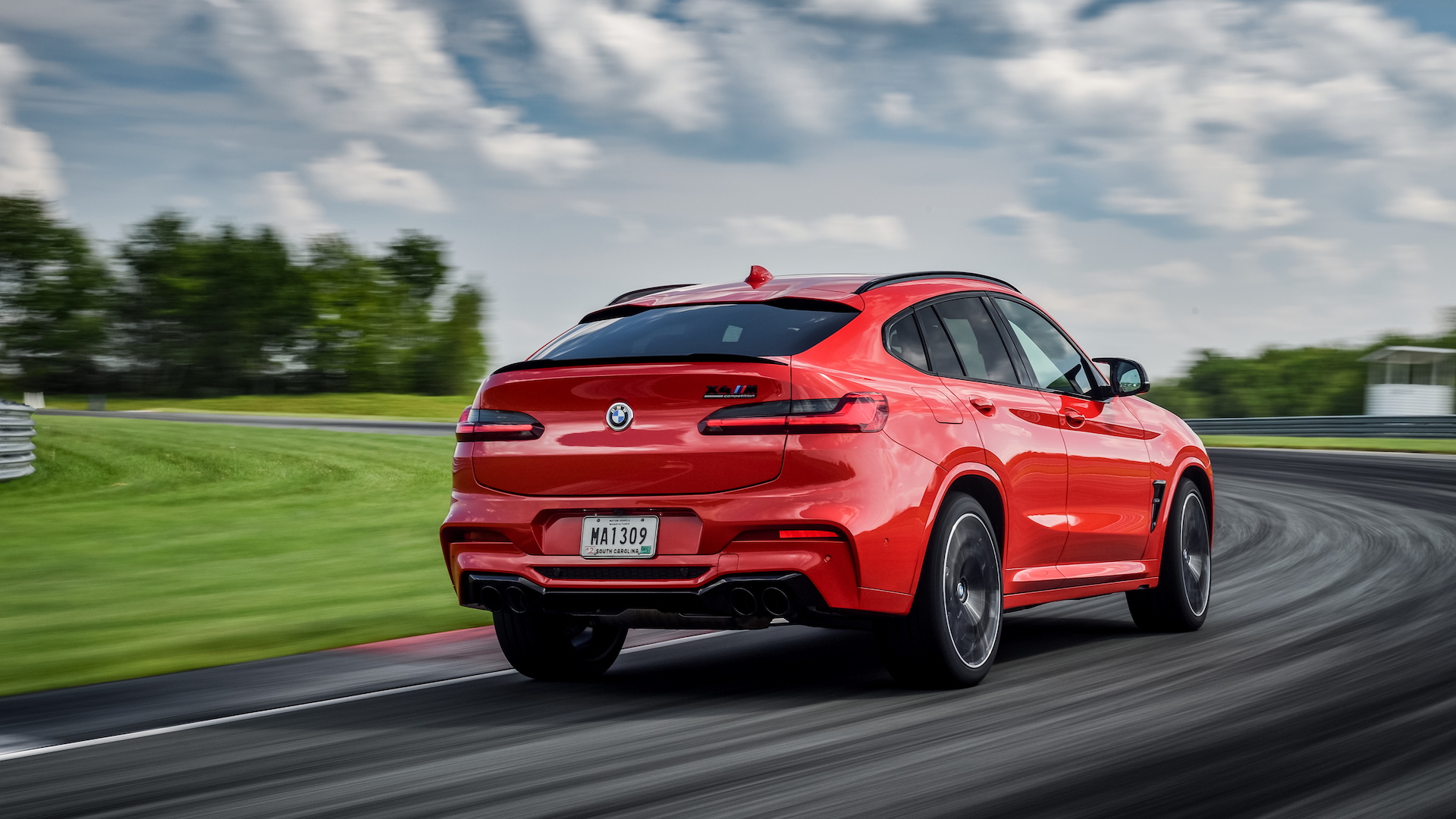 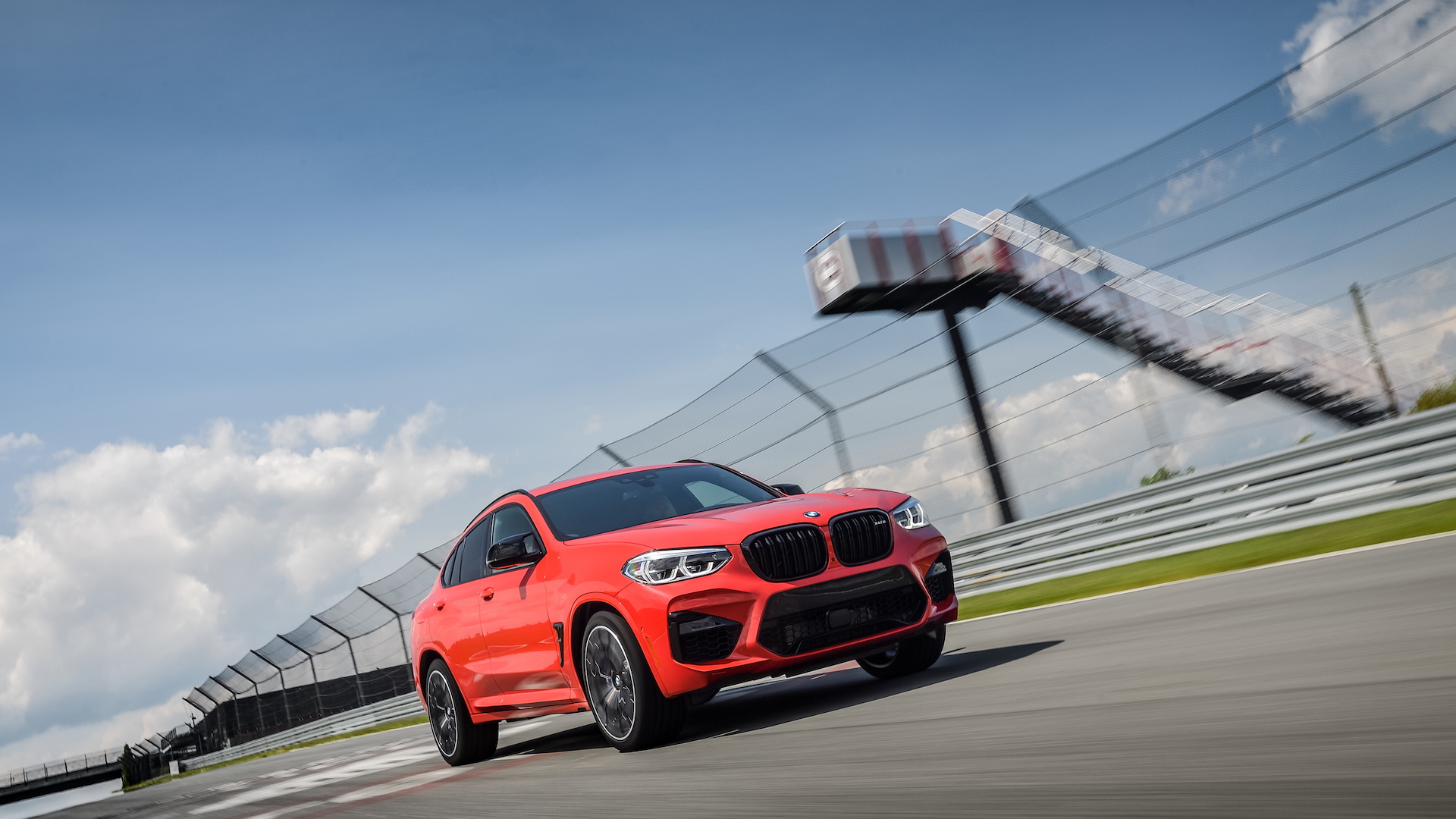 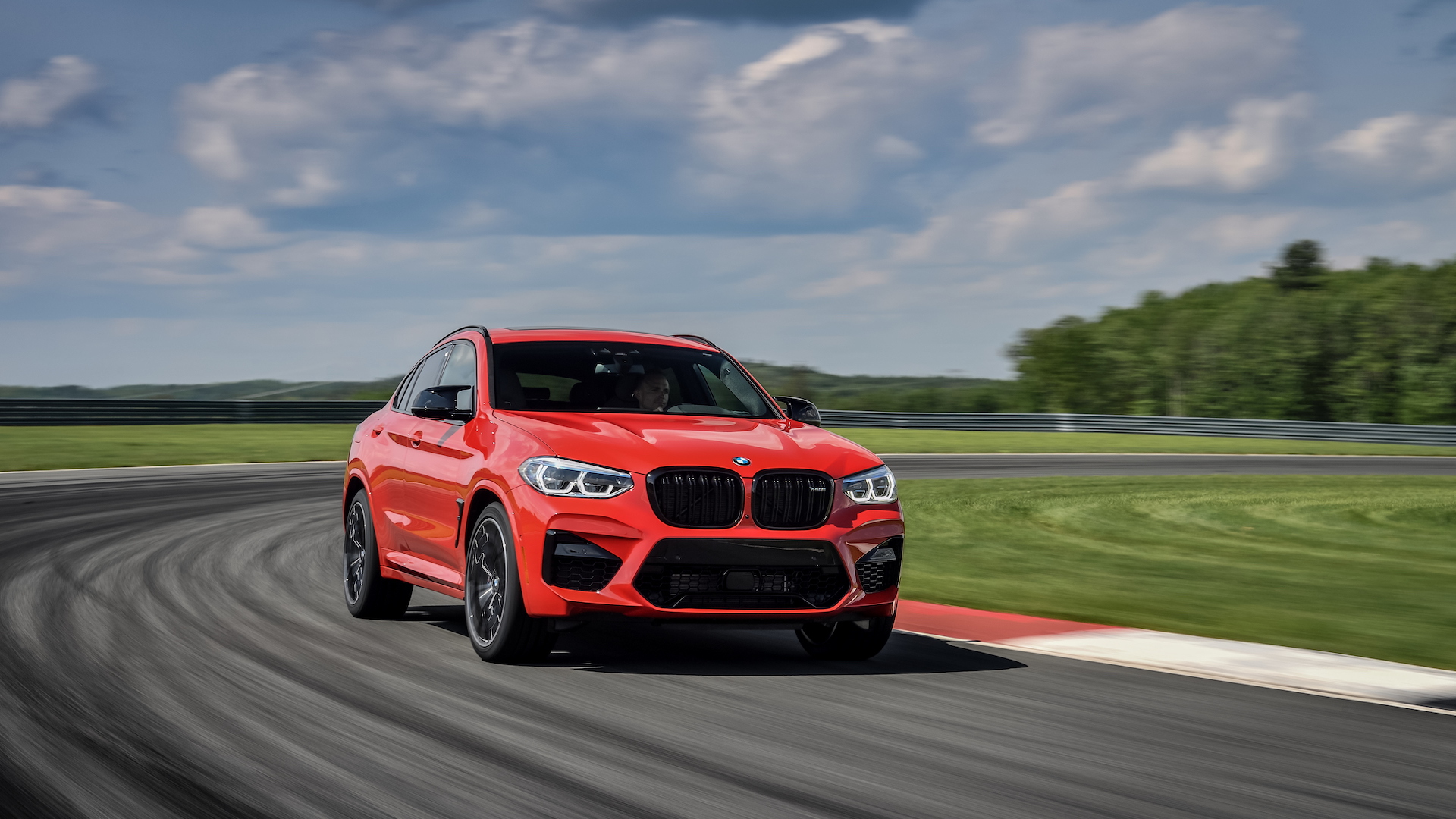 The precise distinction between cars and crossover SUVs (or Sport Activity Vehicles, as BMW prefers to call its crossovers) is a topic of spirited debate, but BMW project leader for vehicle dynamics Bernd Barbisch knows the difference exactly.

A crossover is defined by 203 millimeters, or 8 inches. That is the minimum ride height for a vehicle to be classified as a light truck rather than as a passenger car, he explained. So his efforts to make the X3 M and X4 M drive and handle as much like their M3 and M4 counterparts as possible began with that as the literal floor upon which all of the company’s efforts were built.

“It is heavier, with a higher center of gravity, but we achieved the performance feel of a sports car,” Barbisch claimed. “The goal was to get more or less like an M3 or M4.”

CHECK OUT: First drive review: Keep the 2020 Mercedes-AMG GLC 63 S out of my backyard, and put it in my driveway

Other companies can’t get their coupes and sedans to perform or feel anything close to these benchmarks, but BMW has attacked that challenge with machines that are not only taller and heavier, but that also route some power through the front wheels. Even without those other handicaps all-wheel drive can sap the lively steering response enthusiasts demand from their M cars…or, in this case, M SUVs.

The X3 is BMW’s compact crossover SUV, and the X4 is the lower-roofline, sportier-silhouette hatchback version of the same vehicle meant to appeal to younger buyers. The “Competition” designation denotes the still-higher-performance and still-more-expensive versions of both vehicles, and it is Competition versions journalists are testing at and around New York’s Monticello Motor Club country club racetrack. The X3 M and X4 M are indistinguishable from behind the wheel and on their spec sheets, so the only difference is which you prefer. That, and the unfortunate absence of overhead grab handles for passengers in the X4 M.

Driving on the rolling rural byways of New York and northern New Jersey in the vicinity of the Monticello race circuit, the X3 M and X4 M feel, well, exactly like BMWs. That means the thick-rimmed, leather-wrapped steering wheel provides direct feedback and immediate response to steering inputs.

Especially impressive is the vehicle’s ability to change direction through switchbacks, as the active dampers help the BMW hide its bulk. The active all-wheel drive similarly helps minimize understeer in the slow corners, where a heavy machine with power passing through the front tires would normally frustratingly succumb to sliding its front end.

One contributor to this Toronto Red X4 M Competition’s handling prowess is the addition of chassis braces that reinforce the regular platform to prevent it from twisting under the incredible loads generated by the M upgrades. There are five additional or beefier braces at the front of the chassis and three more or enlarged ones at the rear. Models with a sunroof get another A-frame brace under the bottom of the vehicle at the rear to further resist twisting forces.

This is critical because “the chassis is the biggest suspension component,” Barbisch noted. The aim is to take it out of the equation as much as is possible by making it as stiff as is practical. The result is a pair of crossovers that drive much like their M3 and M4 cousins, just higher.

BMW’s most-powerful straight-6 ever, a twin-turbocharged 3.0-liter unit, lives under the hood of both vehicles. In regular X3 M/X4 M trim, it produces 473 horsepower and 442-pound-feet of torque. In Competition spec, horsepower rises to 503, but torque is unchanged. It powers all four wheels through an 8-speed automatic transmission.

Fully 90 percent of the parts in this engine are different from previous BMW 3.0-liter straight-6s. This engine has a larger bore and a shorter stoke, as well as a forged crankshaft and forged pistons, to push the rev limit to 7,700 rpm. In the Competition version, the air intake and exhaust systems are enlarged for better flow at maximum revs.

The engine engineers seem most proud of how quickly the straight-6 revs. In fact, I found it revs so fast that, with the transmission in manual mode, it can be easy to hit the rev limiter when coming out of slow, second-gear corners on the track. It’s probably better to leave it in automatic mode than to play Formula One driver by squeezing the paddles.

BMW mounts the shift paddles on the steering wheel, which can make it hard to find them when steering through tight corners that cause the wheel to turn more than 180 degrees. However, the X4 M’s quick steering never needed to go that far even though the tightest of turns on the track. That left the shift paddles always at the ready when I wanted to shift for myself.

The mighty “M” 6-cylinder effortlessly powers the X3 M or X4 M up hills and past traffic. Driving in Comfort mode, the engine is naturally silent, while Sport and Sport+ modes employ muffler bypass valves to let the engine speak in a louder voice.

Maybe it is the muffling effect of the turbos or the naturally pleasing sound of the inline-6, but even when the mufflers are bypassed the sound is never intrusively loud and never drones annoyingly—problems that have plagued some sport exhausts when driving at less than full throttle.

On the track at Monticello, I sometimes wish for a bit more noise but not for more power, as the engine has the grunt to rocket the 4.590-pound X4 M Competition (4,620 pounds for the X3 M Competition) from turn to turn and from 0 to 60 mph in 4.0 seconds. The top speed is electronically limited to 155 mph, unless you spring for the $2,500 M Drivers Package, which unlocks 177 mph.

Anticipating the hard cornering potential of these M vehicles, the engine includes a two-stage oiling system that is similar to a racing dry sump to ensure a continuous supply of lubrication, even on the racetrack.

Moving this much mass, this quickly, proves to be a fairly straightforward demonstration of the laws of physics. While massive tires and brakes can stop so much mass more quickly than might be expected, and canny suspension tuning can cooperate with those sticky tires to let it change direction adroitly, the only way to accelerate it briskly is to torch scandalous volumes of fuel.

Another issue is the massive windshield pillars, which significantly impede vision in left turns. It is good to have the peace of mind that the roof won’t collapse in a rollover accident, but the thick left pillar proved to be an impediment to following the racing line at Monticello.

The two other biggest add-ons were the $2,500 Executive Package, which includes the panoramic moonroof, a head-up display, and seat heaters; and the $2,500 M Drivers Package, which boosts the top speed by 22 mph.

Whatever the top speed configuration, any X3 M or X4 M is a worthy member of the “M” family, even if they fall on the wrong side of the 8-inch boundary for those purists who wish the spinning propeller brand limited itself to the compact sedans that earned it the love of enthusiasts in the first place.

BMW paid for airfare and lodging for this Internet Brands Automotive contributor to bring you this firsthand report.