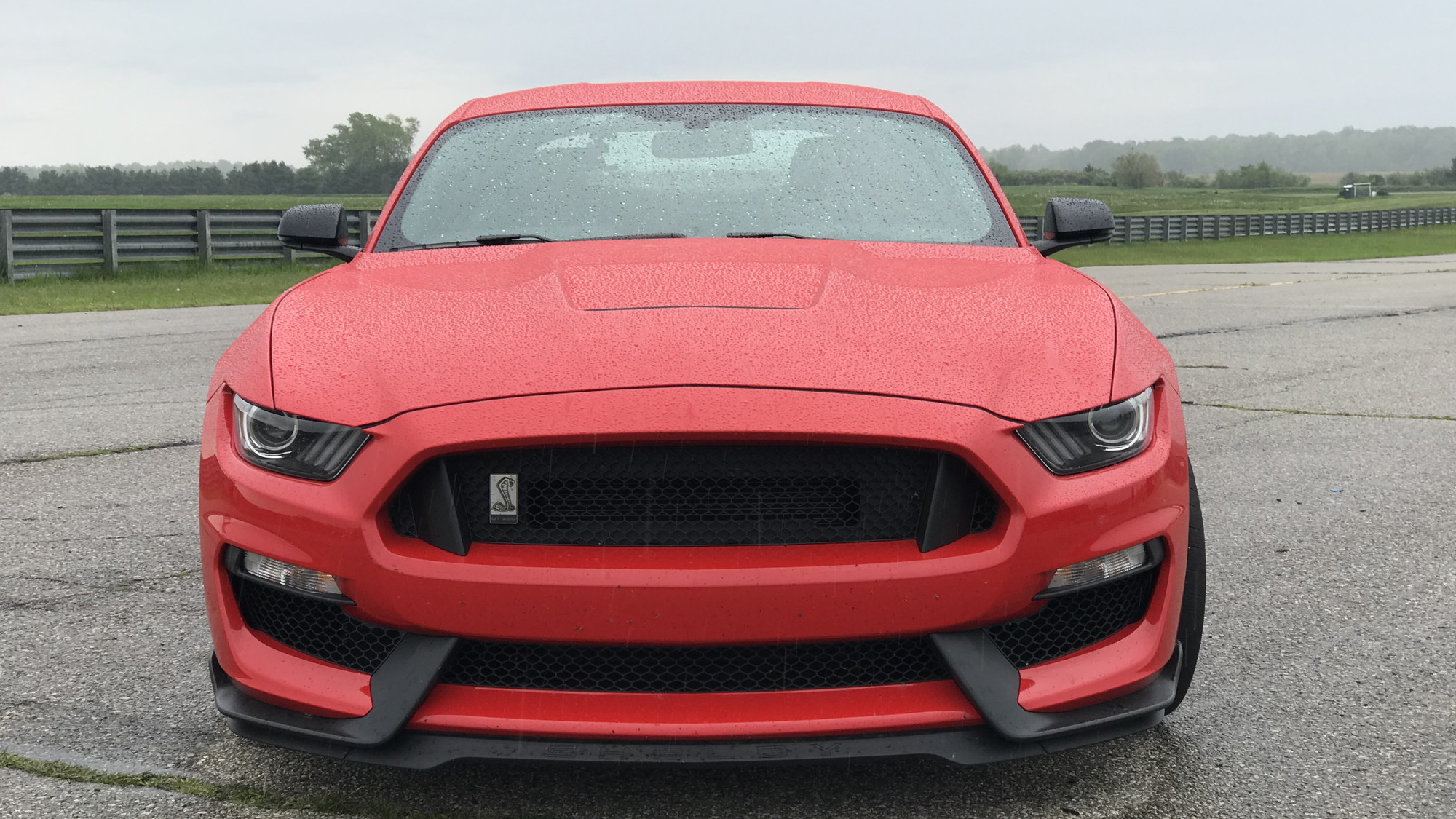 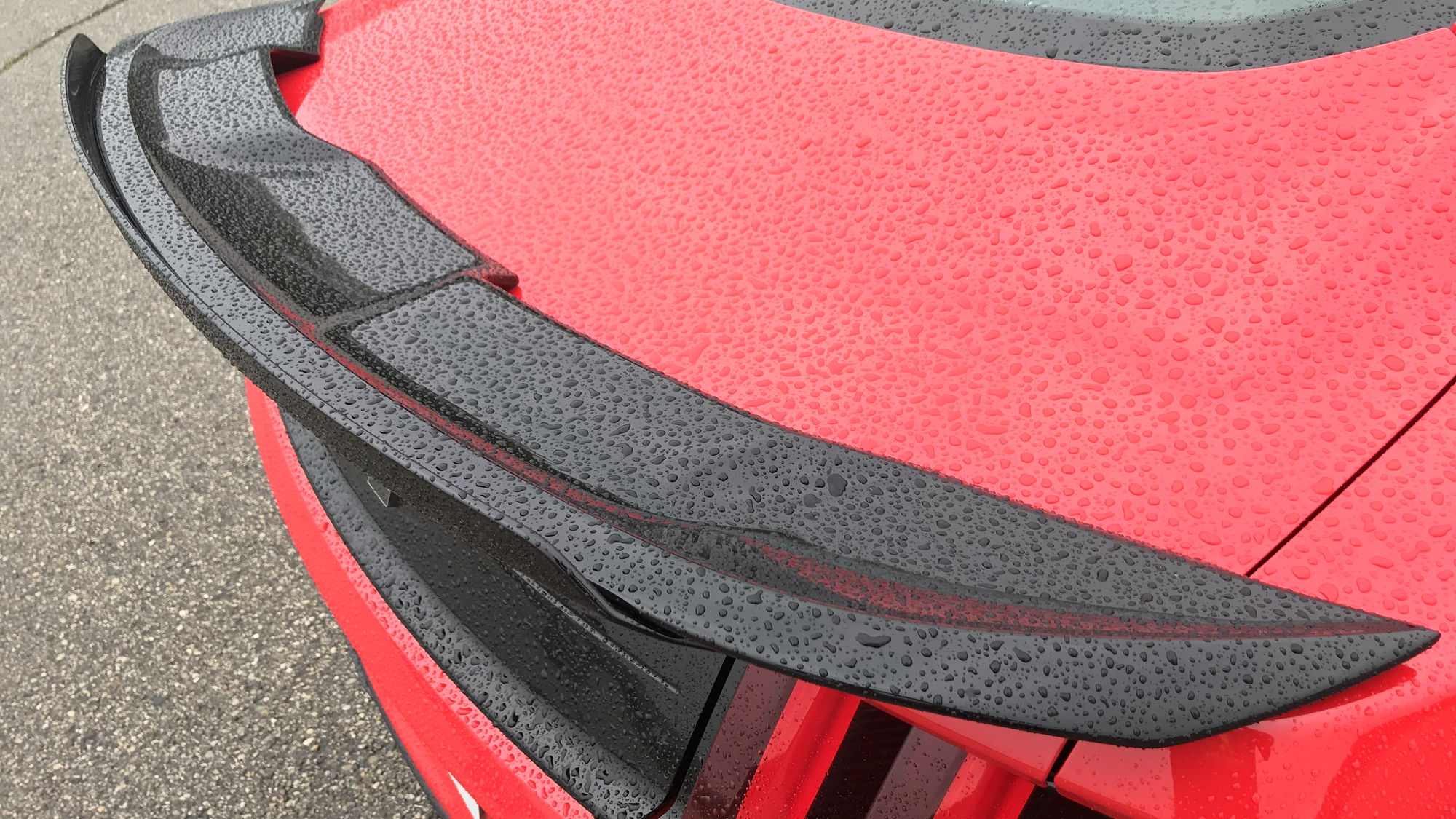 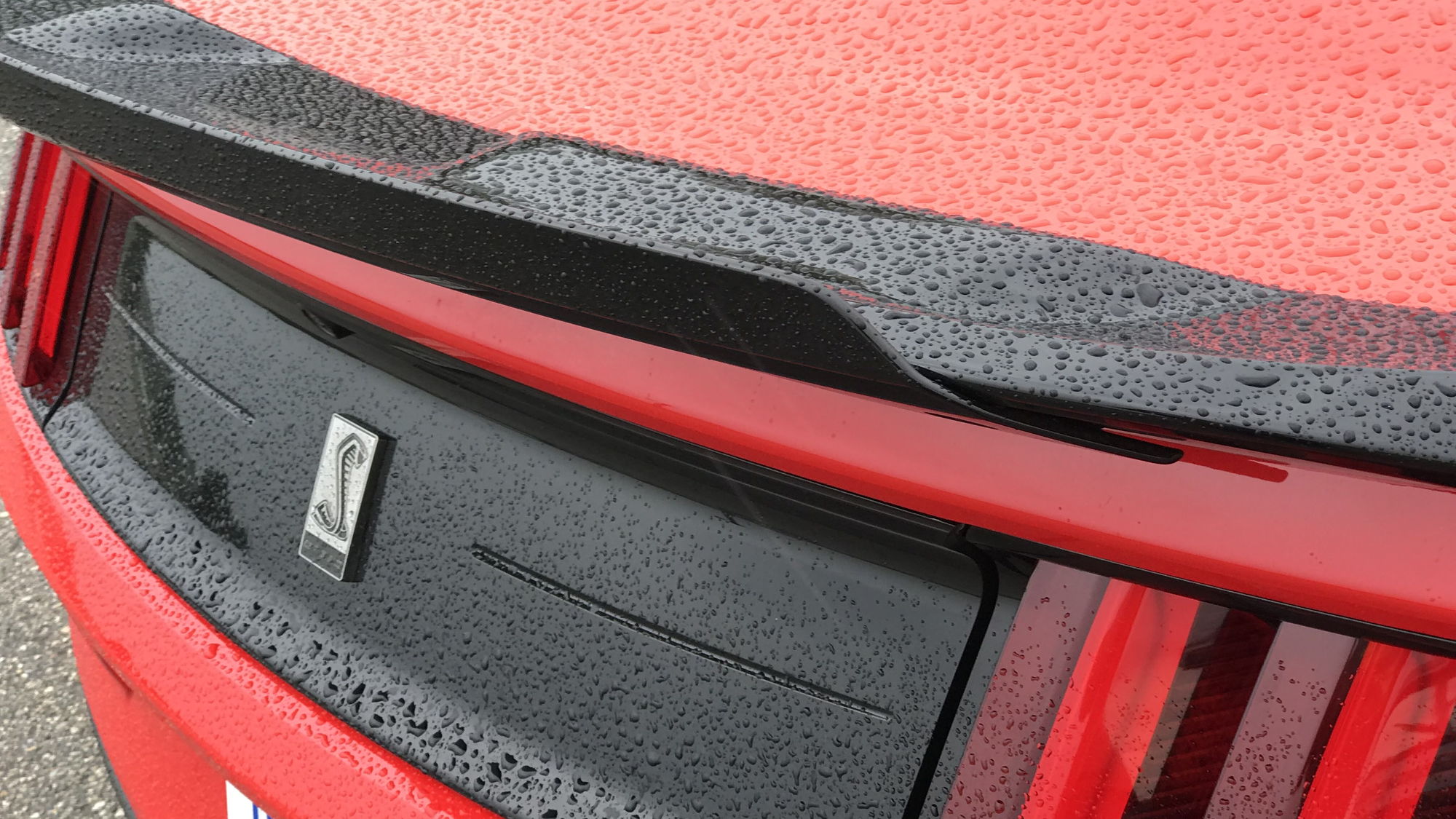 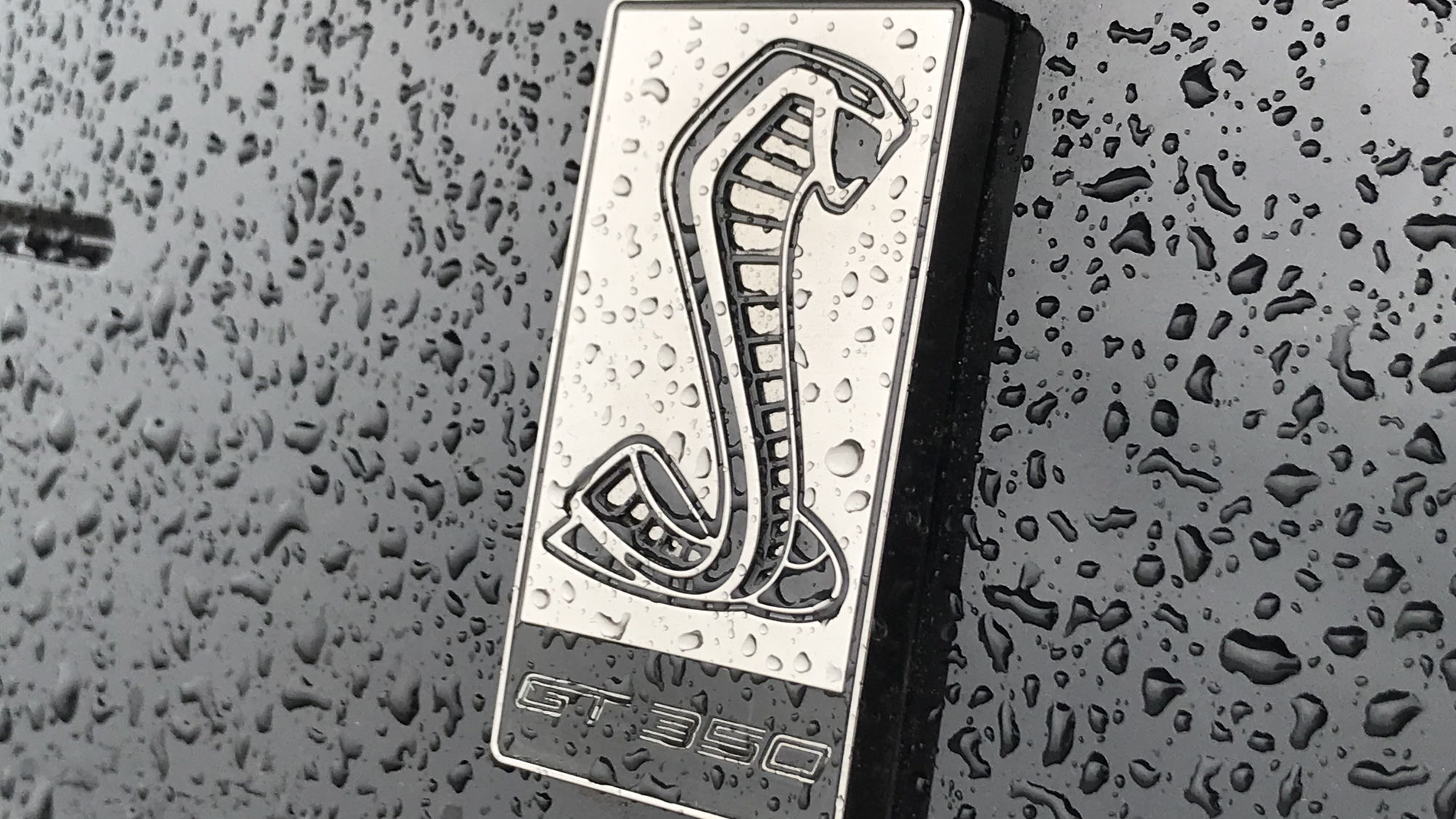 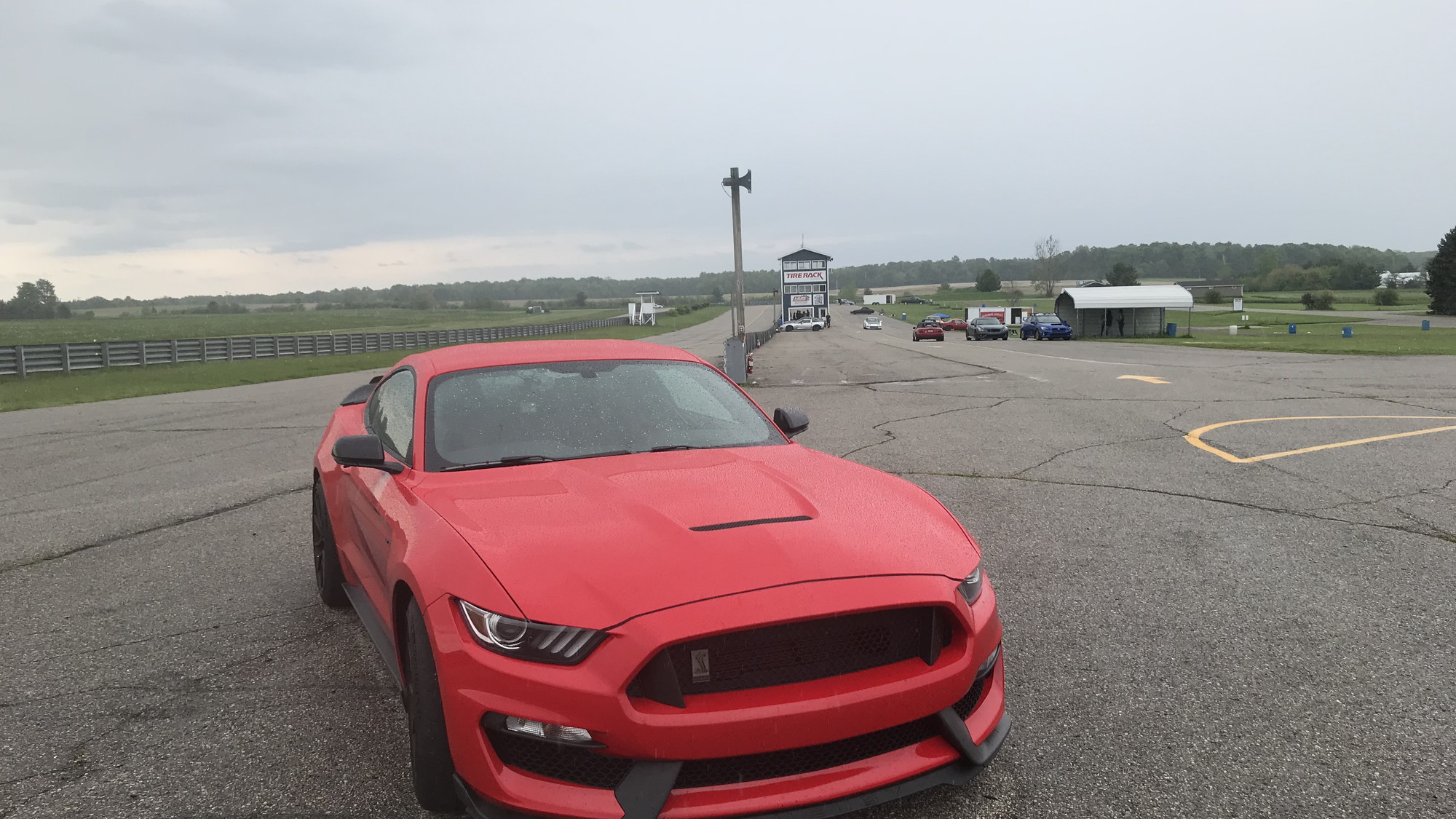 It’s mid-afternoon at Gingerman Raceway in Western Michigan, the 2019 Ford Mustang Shelby GT350’s tires are warm, the Recaro bucket seat is digging into my hips, and the skies look like they are ready to open up. I want to try a new racing line on my fourth and likely final track session, and see if I can get a catchy tune out of this tuba.

I drove the revised 2019 GT350 at Detroit’s M1 Concours just few weeks ago, and now I have it for a half day of track driving. So far, I’ve put up a time in the mid 1:43s, and that just doesn’t feel good enough. This car is more capable than that. The new Michelin Pilot Sport Cup 2 tires are just too good. The rear end is too settled.

Shelbys of a feather

Serendipity plays a part today. Another driver is here with a new 2019 Shelby GT350 of his own, and this is his fourth track day in just 1,700 miles of ownership. He approached me to introduce himself earlier in the day and later he told me he ran a time of 1:40.13. What gives? I’ve been around this track enough times to think he’s likely not that much faster than me.

His name is Jason Nichols. He’s a CPA from LaPorte, Indiana, and he’s adjusted the car’s camber plates to run with -2.5 degrees of camber in the back, -2.3 degrees on the right front, and -2.6 degrees on the left front. I’m running the stock setup, which gives the car -1.1 degrees of front camber and -1.2 degrees of rear camber. More negative camber equals more contact patch in turns and therefore more grip, so that’s likely why he’s faster, but not three seconds faster.

To see if there’s something else I’m missing, I rode with him for a few laps to recon his line and his driving style. I noticed he’s braking later and carrying more speed than me in some turns, both of which you would do with more grip.

He also showed me a different line through turn 10B, which is a 180-degree right-hander that leads onto the longest straight. Essentially, the entry to this turn is a throwaway, so he takes it on the inside, thus shortening it instead of getting out to the left to try to build more speed through a corner that is so long it won’t permit more speed anyway. During those few laps he put up a time in the 1:41s.

Now it’s time to take my shot at cutting into the three-second gap between our times. I start the Harry’s LapTimer app on my iPhone, which seems to be all the rage with the crew assembled at this private track day, hit record on the GoPro (only to learn later that the mini SD card was full—thus the slower accompanying video), then head off for an eight-lap run.

The strategy is the same as I’ve used all day: drive the tires off this thing, figuratively. A lot comes together in the 2019 Ford Mustang Shelby GT350 to make it a great track car, but the tires are the main reason it’s assuredly faster than it has been since its 2016 launch.

The Michelin Pilot Sport Cup 2s are especially effective in the turns 5-6 double apex.  As I approach this turn, I brake, but not as hard as I normally would, turn in, trust that the grip is there, get it out the first apex, then dive to second apex using slight bits of braking to adjust the attitude of the nose. Then it’s back on it to track out. The flat-plane crank 5.2-liter V-8 awakens and sounds it mighty howl.

The Cups 2s let me carry more speed through turns 8 and 9, which means I’m at or approaching 100 mph coming into 10B. That’s probably 8 mph faster than I’ve been in any other car.

Coming out of 10B, I head onto that long straight, and this is the only spot on the track that the high-revving 5.2-liter V-8 needs another gear. I let it wind up to 8,000 rpm before shifting to fourth (earlier, I rode in a friend’s 2014 Mustang GT and found he needs to grab fifth here and has to a lot more shifting throughout the track). I run it up to 124 mph, hit the brakes, then it’s back down to third for turn 11.

I cross the start/finish line, brake before the GT350 crests the hill in front of turn 1, and experiment with shifting to second gear for this tight lefthander. It seems to work well as the engine asks for third right at track out of the turn 2 righthander that follows turn 1 so closely. From there, it’s third all the way to that long straight.

As I finish my run, the sky is even darker, and the trip computer says I have 25 miles of range left, though it’s calculating that based on the 5.0 mpg I’m averaging during track driving. There is still an hour of track time left, but by the time I go get gas, the rain arrives and my track antics are over.

That’s OK because data from the Harry’s LapTimer app shows I posted three laps in the 1:41s, and possibly two more. My best official time is a 1:41.61, though the strange 3:22.58 suggests the app didn’t recognize the start/finish line and timed two laps as one. That would average out to a time of 1:41.29.

I’m satisfied and, in fact, informed. Comparing my time versus Jason’s suggests the adjustable camber plates (which cost $850 and come with the rear spoiler’s optional Gurney flap) are good for 1-1.5 seconds on a twisty 2.14-mile track like Gingerman.

Both times also show how incredible this car performs. My 1:41:61 is almost exactly 1 second off the best time I ever achieved at this track, a 1:40.64 last year in a Nissan GT-R Track Edition. Priced at $64,860 with just a few extras, the GT350 costs about half as much as that car, and as Jason showed, it can actually be quicker with the camber adjusted.

That’s a pretty sweet tune for a tuba or a Mustang.