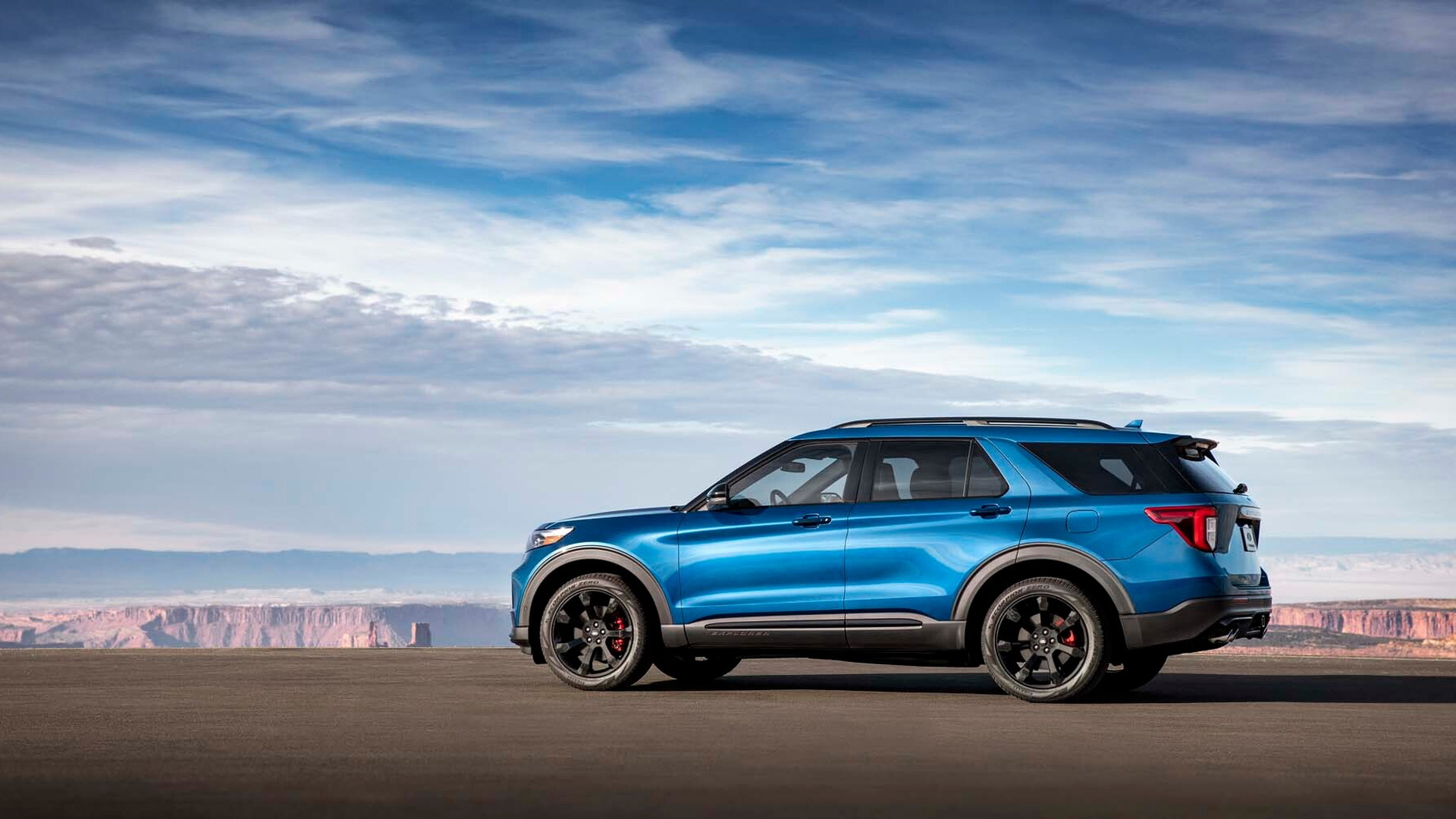 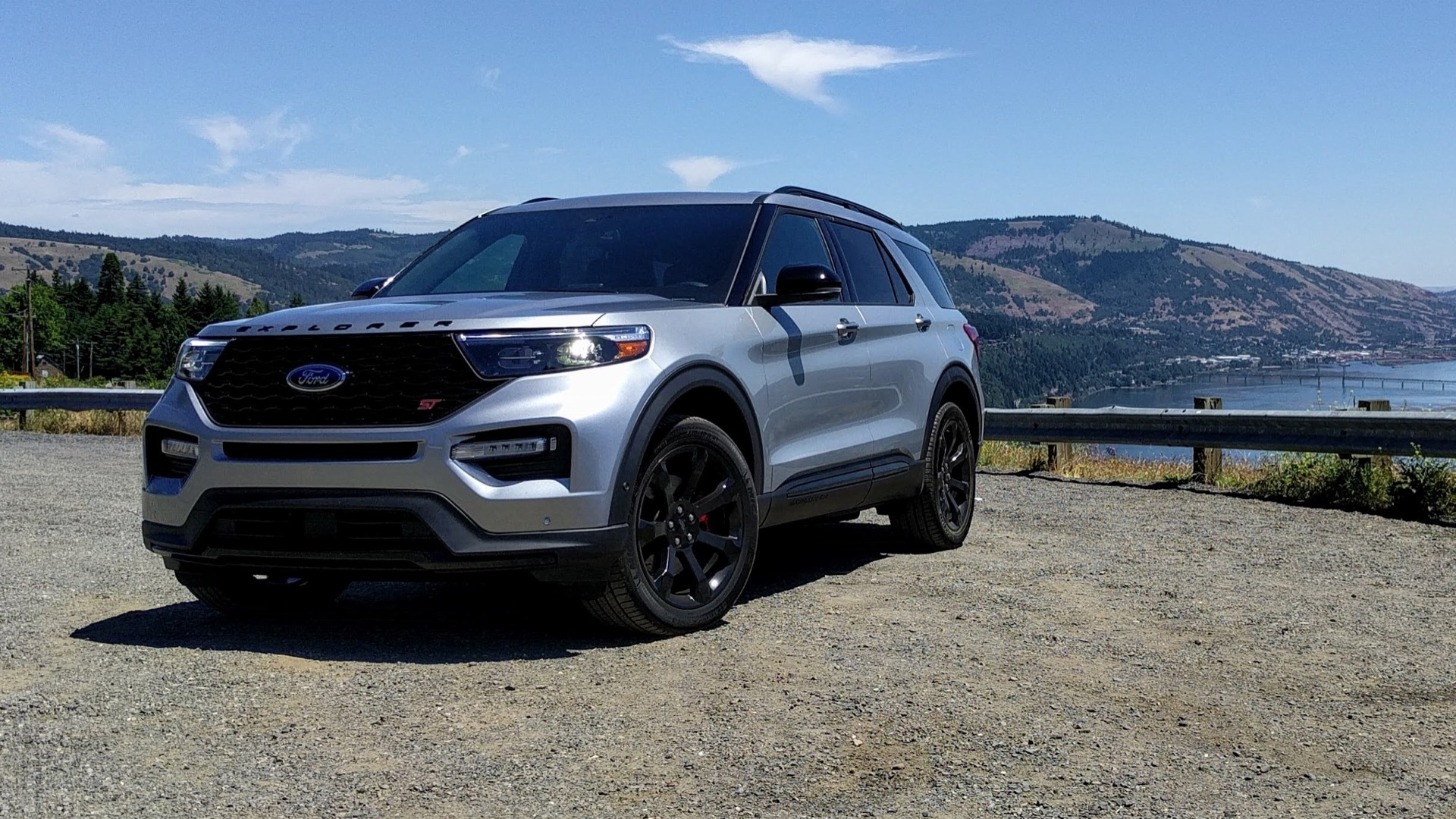 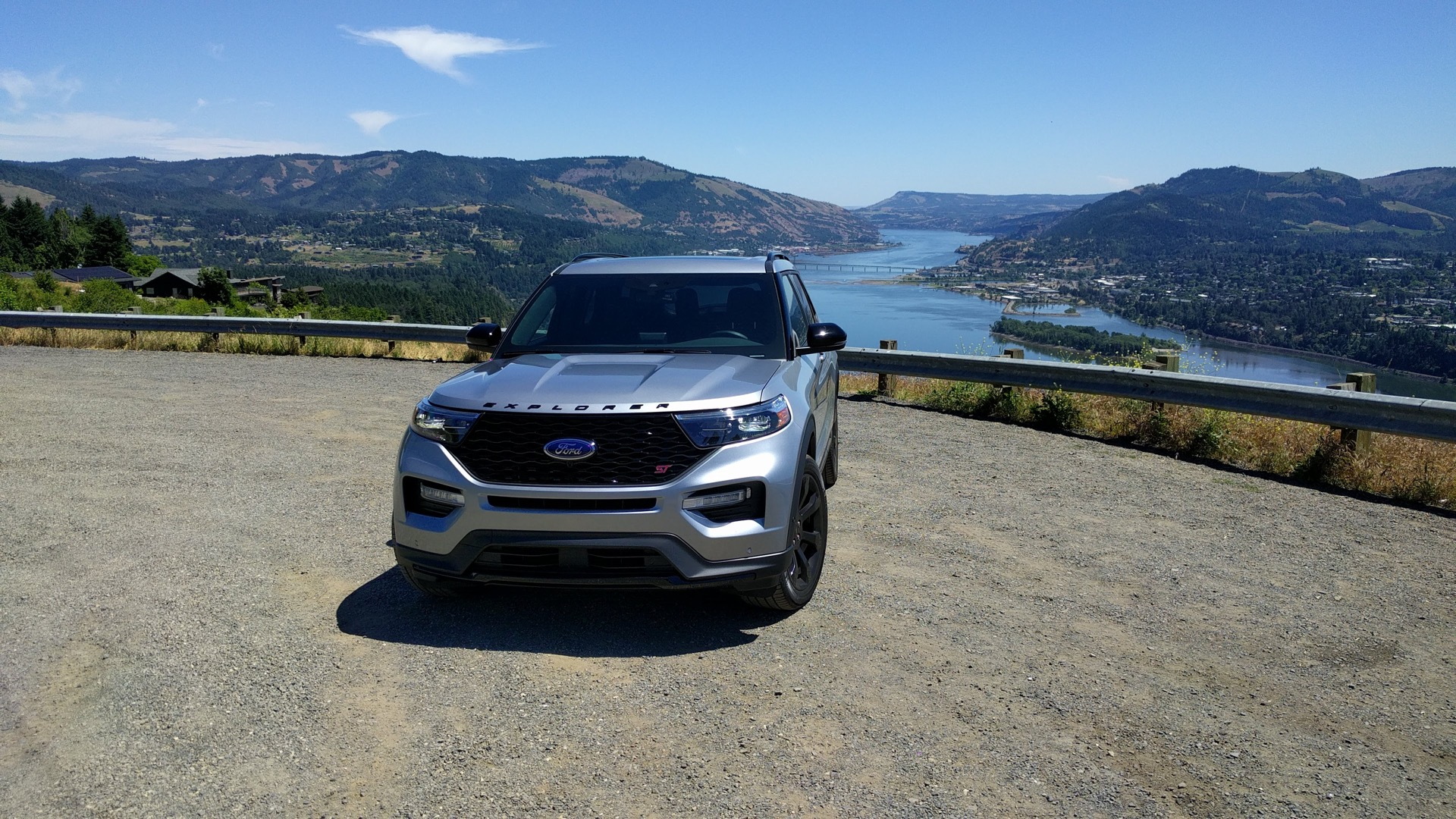 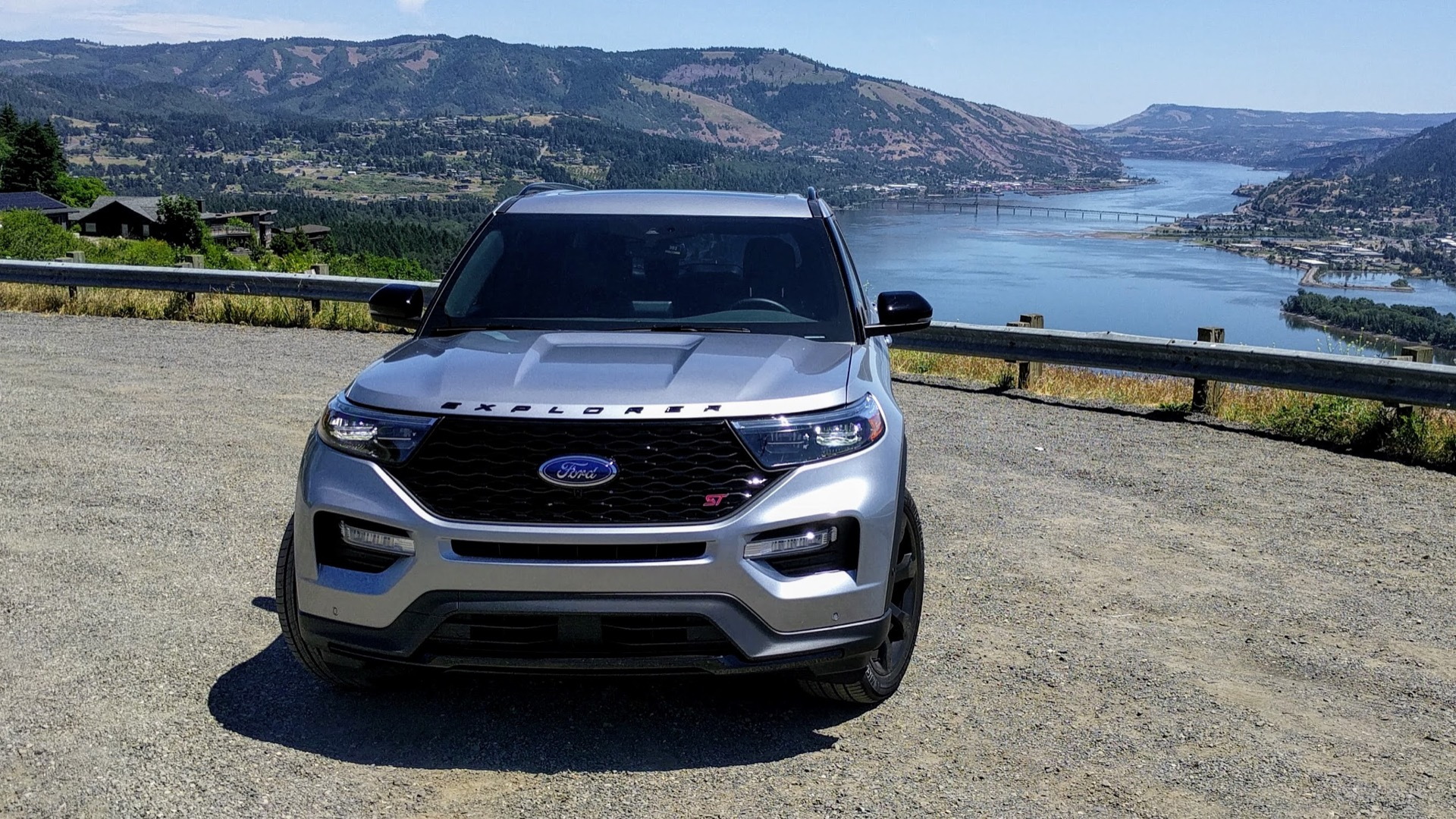 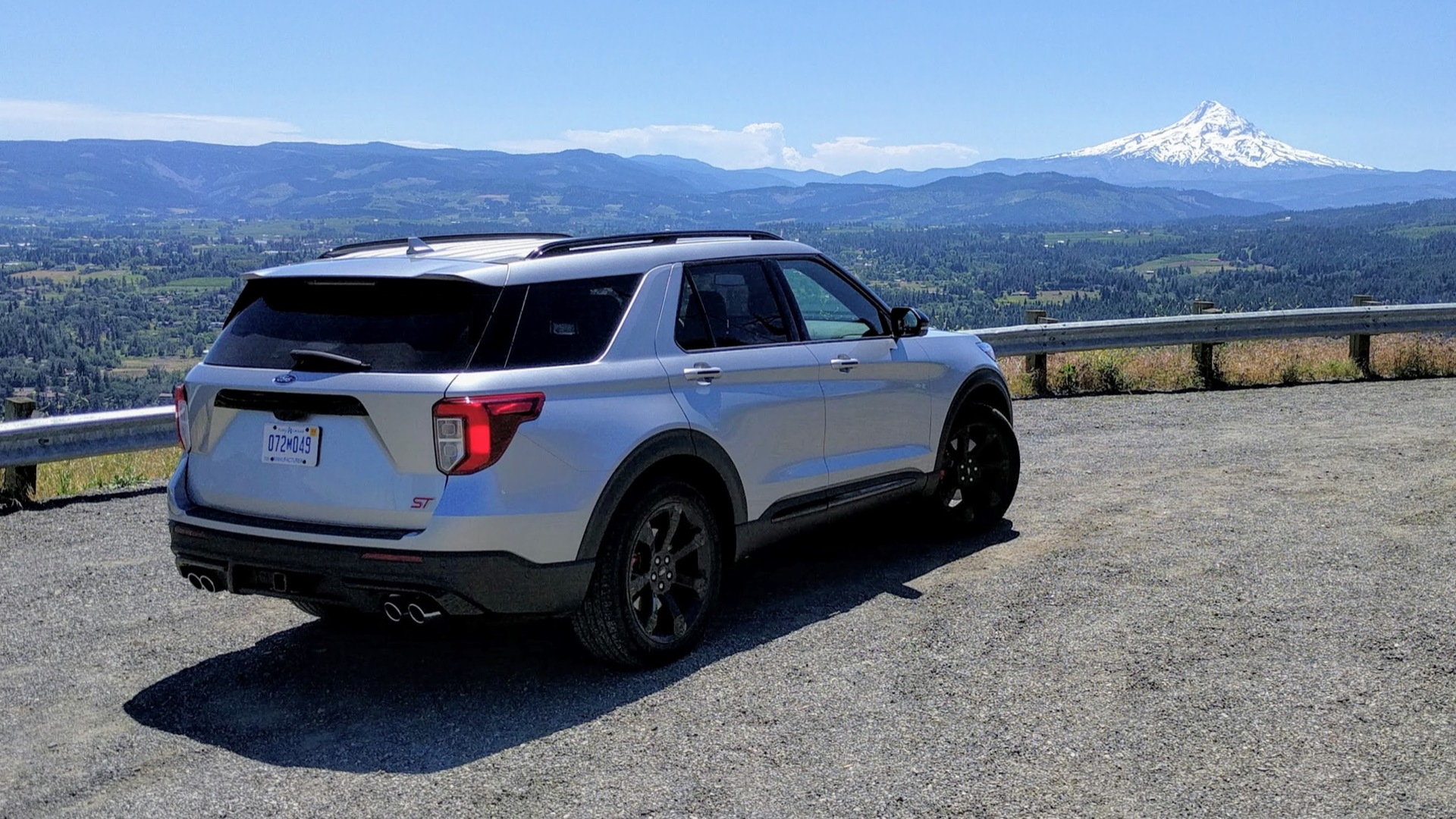 The idea of an Explorer bearing Ford’s two speedy red letters seemed like a stretch.

Not long ago, the ST stamp was reserved for some of Ford’s brashest European concoctions. Not Mustangs or F-150s or (gasp) three-row, six-passenger Explorers.

Ford set out the wide range of 2020 Explorer models for us to drive last week, including several STs. Yet, with the idea of an Edge ST and an Explorer ST still settling in—and some memories of what a hoot it was to drive the Focus ST and Fiesta ST—I avoided the “ExploreriST” at a couple of points through the day and saved it for last. It had better be good.

It was. The Explorer ST is the most dynamically competent three-row SUV I've driven from a mainstream brand, with just a little more sharpness and attitude where it counts.

The suspension tuning of the new Explorer is fluid and graceful at face value, but there’s an underlying firmness that reveals itself when you push it moderately hard into a corner. In the ST, it’s still all there, just with higher thresholds. The initial body lean that carries over from other Explorers is the key to making the 4,700-pound Explorer ST feel so reassuring in tight corners and quick transitions.

On a series of imperfect, terrain-following backroads in Skamania County, Washington, up and down the side of the Columbia River Gorge, it felt so buttoned-down that I forgot I was in something so tall.

As a reality check, the ST isn’t any shorter than the rest of the Explorer lineup, and it actually has the highest ground clearance among all the versions in the lineup (by 0.1 inch on paper).

"Buttoned down" is certainly not the way I would have described any performance version of the outgoing Explorer, which was built on Volvo bones that were stretched and reconstructed well beyond their intended purposes. The 2020 Explorer is built on a new rear-wheel-drive layout, and it rides on a strut-type front strut suspension with a multi-link rear setup, plus stabilizer bars front and rear and gas-pressurized hydraulic shocks. There are no special stops pulled for magnetic ride control or air springs; this is just good suspension tuning.

Steering is on the light side, even in Sport mode where it firms up some. With the ST’s very narrow on-center spot and a relatively quick steering ratio, it’s easy to head slightly off your intended course with a twitch of the arm. On tighter curves, when you have to dial more steering in, the weighting builds, though, and it’s more reassuring and can play tricks in terms of what size vehicle you think you’re inside.

Speaking of tricks, the Explorer ST has the same tuned exhaust resonator as the Platinum version, but Ford has added a supplemental sound system that cranks up its output in Sport mode. The sound is way too boy-racer than most performance-minded Explorer owners would ever want, but it’s inspiring.

The engine itself is mostly the same 3.0-liter twin-turbo V-6 engine as used in the top-of-the-line Platinum version, too, but here it makes 400 horsepower and 415 pound-feet of torque, up from 365 hp and 380 lb-ft. The ST’s engine is rated with 93-octane gasoline, whereas the rest of the Explorer lineup—EcoBoost or not—is rated with 87.

Just as with the Platinum and its version of this V-6, the most embarrassing moments for the ST come at standing-start launches, where it responds to an accelerator slapped to the floor with a half second of indifference, followed by another second of weak launch, followed by a firmer push back in your seat as everything kicks in. The Explorer Hybrid, with its electric motor pitching in up to 221 lb-ft of torque, scoots more reassuringly from the stoplight.

It’s quite forgivable because the ST is so enjoyable once you’re getting up to speed on a twisty road. You can hit "M" on the top of the shift dial and hold individual gears of the 10-speed with the steering-wheel paddles, or if you’re in Sport mode it generally holds a gear or two lower, ready for you to roll into the power exiting the corner, with the rear-wheel-drive chassis.

The 10-speed is happiest, most responsive, and seamless when you’re driving it hard. It has none of the weak-kneed indecision that plagued some of the early 8- and 9-speeds a few years ago, but it will still pull what feels like a double shift at times, stopping briefly at one gear on the way to another.

ST Street and ST Track packages include 21-inch wheels plus upgraded brakes with red calipers. My test vehicle had the Street package, and the brake pedal feel was especially firm and confidence-inspiring.

On the outside, the most eye-catching details of the ST from afar are the black-mesh grille, blacked-out liftgate trim, special (dark, on our test car) wheels, and “Explorer” spelled out on the hood’s front edge. Inside, the ST comes with a 12.3-inch digital instrument cluster that changes themes as you select drive modes. A flat-bottom steering wheel and micro-perforated leather sport seats are also part of the unique interior treatment, and the ST logo is displayed throughout—even on the infotainment screen, in a splash screen, so that you don’t forget.

Like the Platinum, the Explorer ST can tow up to 5,600 pounds, and it includes a Class III Trailer Tow Package and Cargo Management System, plus Active Park Assist 2.0, which will get you into parallel parking spots by steering, accelerating and braking itself while you hold the button.

The 2020 Ford Explorer ST starts at $55,835, and the bottom-line price of the one we tested was $59,520. That included the ST Street Pack, a big twin-panel moonroof, and a premium technology package including multi-contour seats, a 10.1-inch touchscreen, and 980-watt Bang & Olufsen sound.

That’s nearly the price of the Dodge Durango SRT, which has a punchy V-8 but a cabin that feels less space-efficient. The Explorer’s also a completely different driving experience than what you’ll find in the Jeep Grand Cherokee Trackhawk.

After driving all the versions of the Explorer, it’s the simple XLT turbo-4 versions that offer the most value and make the most sense, but the ST that’s the most charming to drive.

Sometimes stretching a concept to new places can add up to a surprisingly good finish. Such is the case here.

Ford provided lodging to Internet Brands Automotive to bring you this firsthand report.