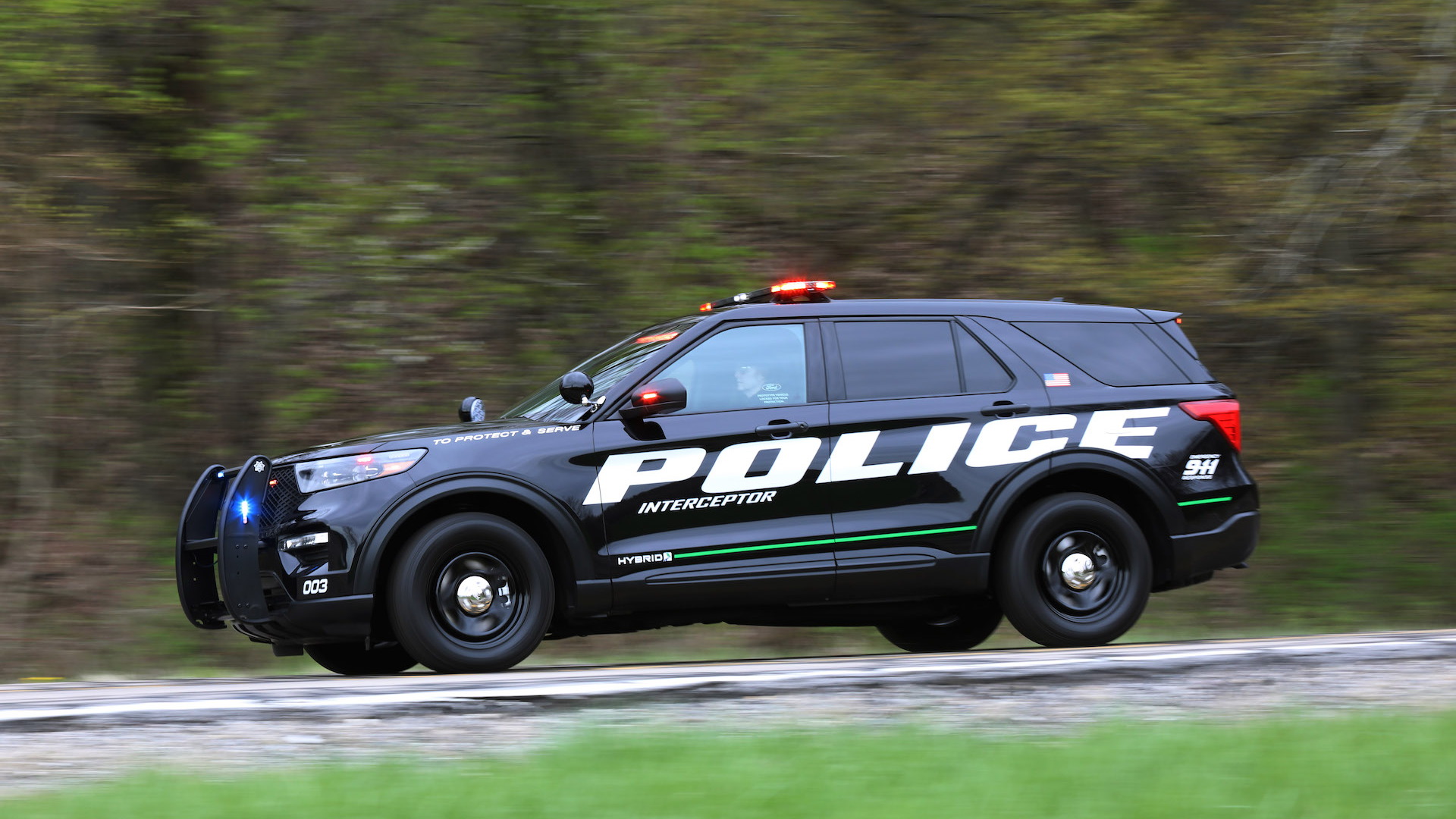 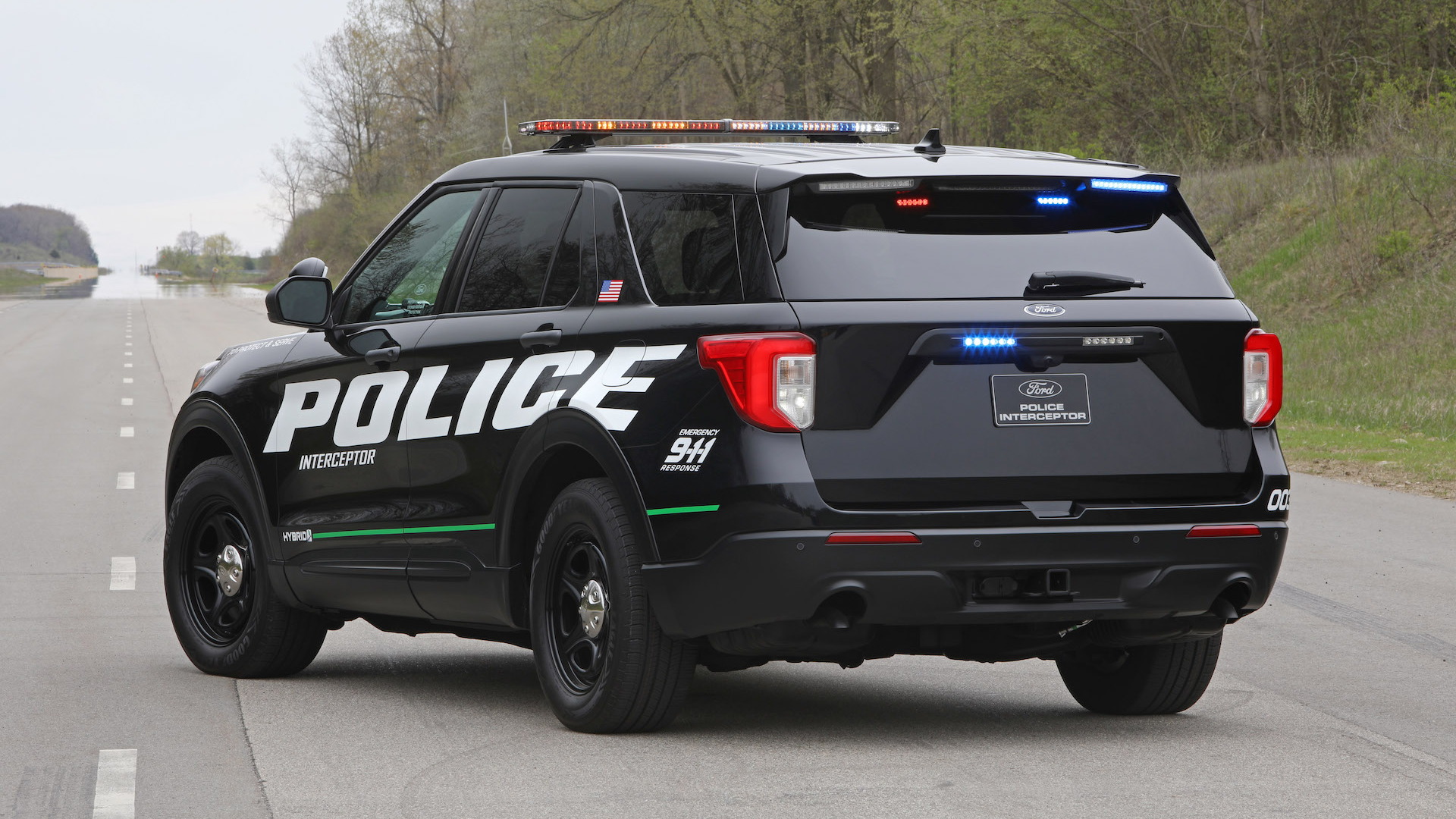 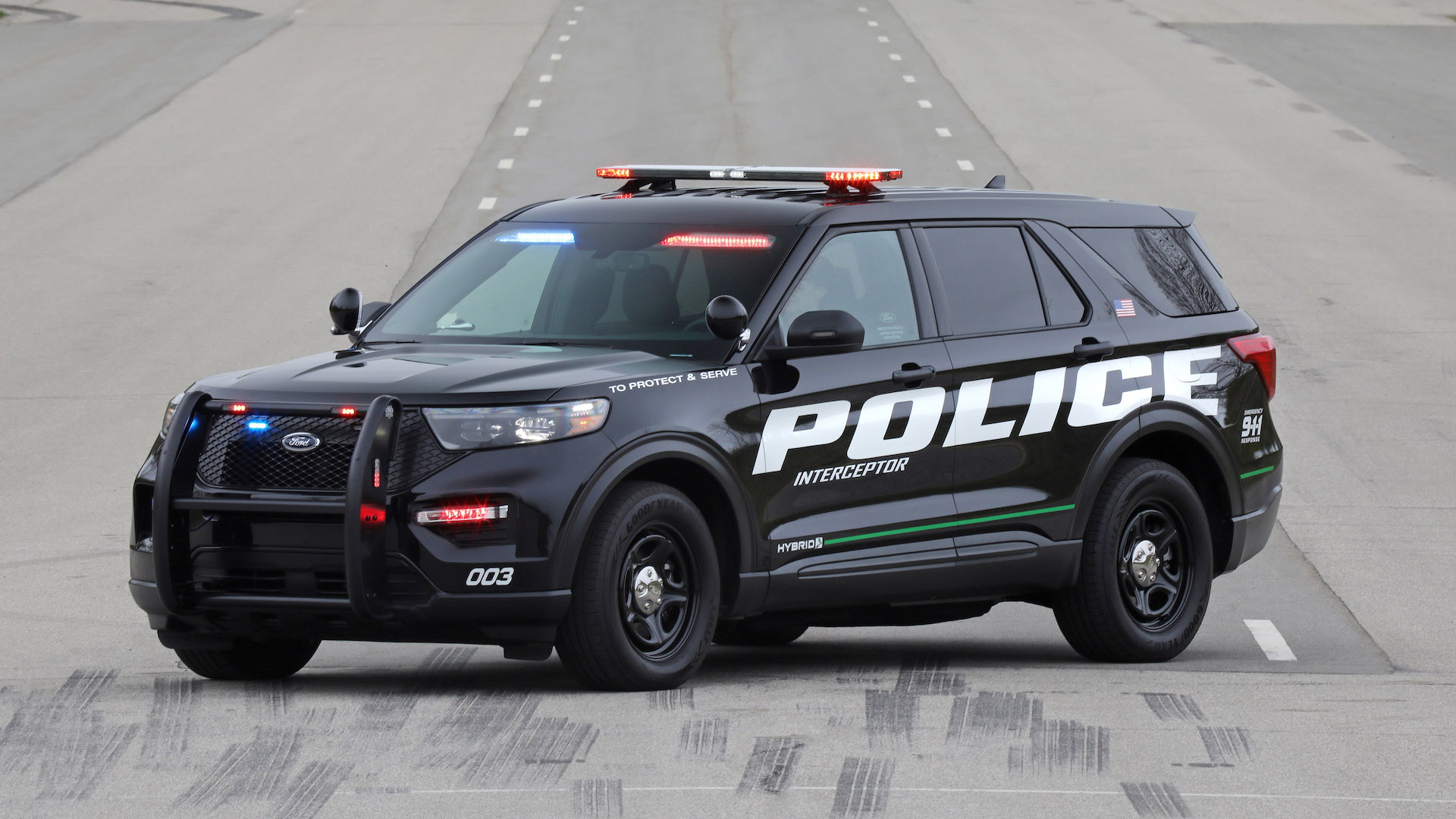 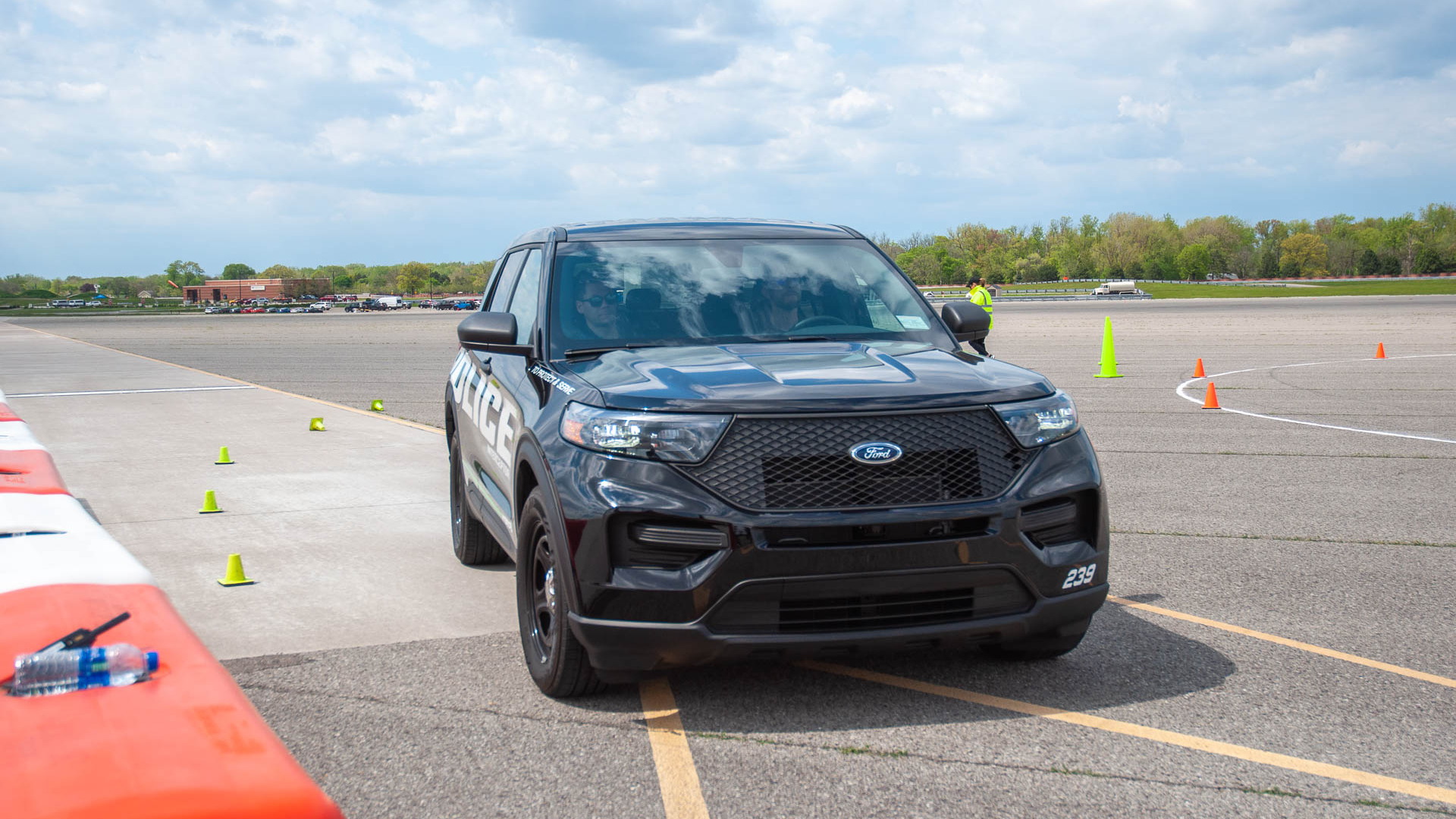 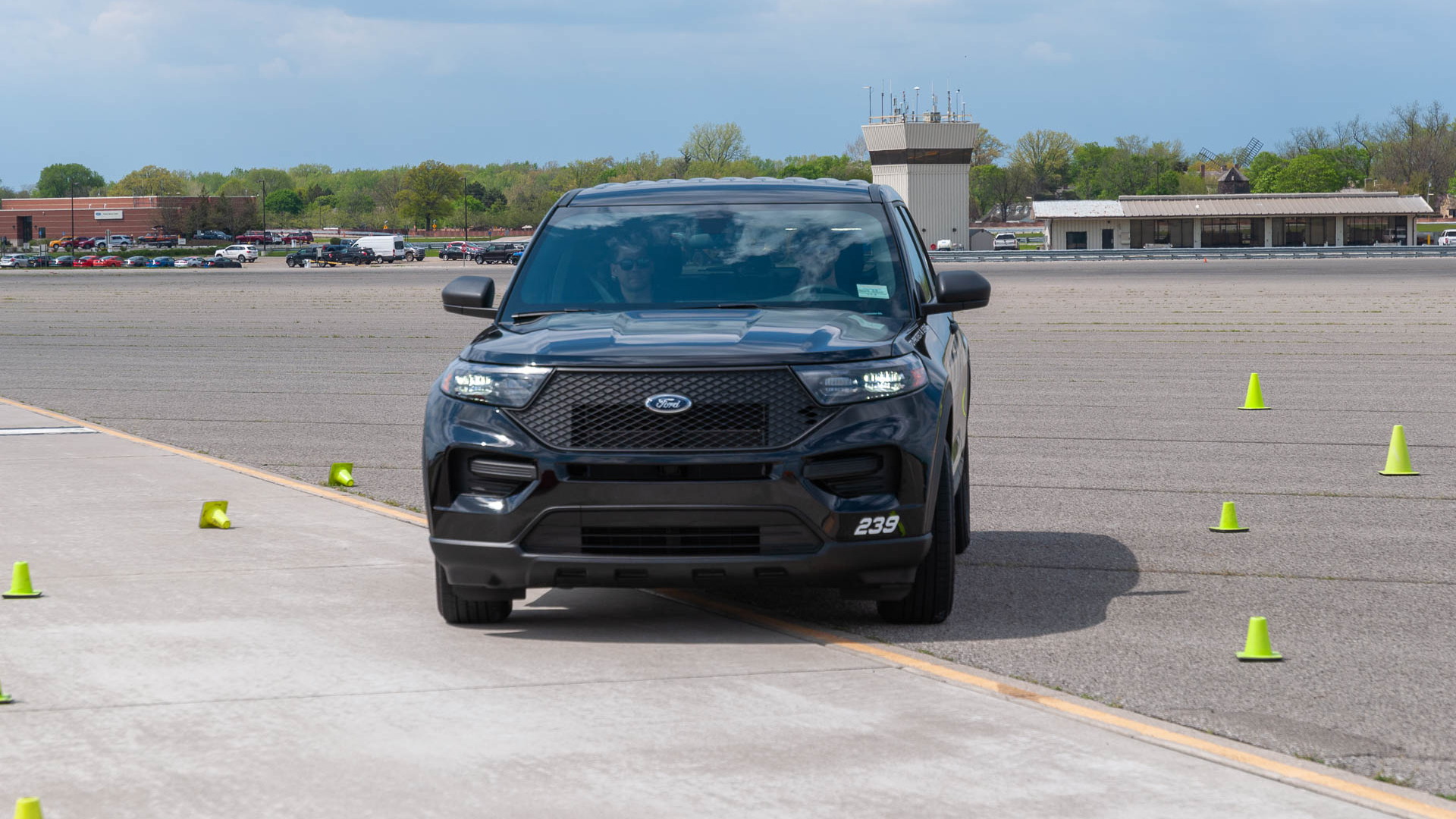 Ford has just let me loose in its new cop car, the 2020 Explorer Police Interceptor, so I can take it for two laps around a short handling loop at its testing facility in Dearborn, Michigan.

I channel my inner Mike Lowrey, and drive it hard, pretending I’m after a bad guy who simply can’t get away with it. I’m in Ford’s new hybrid Interceptor. Off the line, the 3.3-liter hybrid powertrain launches the Explorer cop car forward with authority, though the 7.27-second sprint to 60 isn’t about to set the tires on fire.

As I get into the turns, the SUV reads my rapid steering inputs and heavy throttle foot and switches into Pursuit Mode. The transmission drops down a few gears, keeps the gas engine on boil above 4,000 rpm, and an extra cooling circuit kicks on for this new hybrid’s 1.5-kwh lithium-ion battery pack as it pulls the maximum amount of electrons.

The most distinct driving characteristic of the new Interceptor car is the braking. The larger brakes are grabby—slamming the perp into the rear-seat-barrier grabby. While I was warned they are strong, I still hit the brakes far too early to scrub speed heading into the first sharp lefthander. Two laps are not enough practice to learn the braking points on this handling loop given the Interceptor’s capability. The looming question is how different will the brake calibration be on consumer Explorers? We’ll find out in June, but it’s clear the cops have nothing to worry about when it comes to stopping power.

When I step out of the vehicle, I notice the sound is different thanks to the new hybrid option. As the 2020 Ford Interceptor hybrid model lunges from a standstill, whether at partial throttle or full throttle, it makes an artificial whirring sound outside up until about 30 mph. It’s a pedestrian alert to warn the sight-impaired that an electric car or hybrid is approaching.

Ford expects that most 2020 Ford Police Interceptors will be powered by a 3.3-liter hybrid powertrain making 318 horsepower and 322 pound-feet of torque. Power flows through a 10-speed automatic transmission to all four wheels. Police departments that want to save $3,500, and spend more on fuel, can opt for a non-hybrid version of the same powertrain. Departments can also pay h a $790 price premium to get a 400-hp 3.0-liter twin-turbo V-6. Most of those models will be used for pursuit duty or by highway patrol officers who run at higher speeds more often.

All Explorer utilities are quicker and faster than the outgoing model, which topped out at 132 mph and took 7.81 seconds to sprint to 60 mph. The base 3.3-liter Interceptor launches from 0-60 mph in 7.84 seconds, according to Ford, while the hybrid model drops that to the aforementioned 7.27 seconds, and the 3.0-liter twin-turbo does the deed in 5.77 seconds. The top speeds for the new model? A cool 150 mph with the twin-turbo V-6 and 137 mph for the others. Time for a sports car or performance car if you are a criminal because your basic Focus isn’t going to outrun this thing.

Next, it’s time for a ride-along. I sit right seat (not locked up on the back), as a professional driver pushes the hybrid Interceptor to its limits around a dynamics test loop. Clearly, this cop car crossover is ready to play real-life “Need For Speed Hot Pursuit.” The electronic stability control (which can not be turned off) has been calibrated to allow police officers to push the Explorer harder with higher limits that the Explorer Hybrid consumers can buy. The rear end slides out briefly multiple times around corners, the front exhibits limited push at the extreme limit, and from my vantage point the entire vehicle seems more stable and balanced than the outgoing Explorer. That last bit is good news in regard to the new CD6 platform, which hosts the new Explorer and Lincoln Aviator.

Of course, the Interceptor does have cop brakes and cop suspension. The entire brake assembly, including rotors, pads, and calipers, is larger than the components for the consumer version of the Explorer. The cop car’s 18-inch steel wheels wrapped in 255/60 Goodyear Eagle Enforcer A/S BSW rubber hide upgraded control arms. While the shocks and springs aren’t changed, the calibrations are modified for better handling while engaged in a pursuit as comfort isn’t as large a priority. Sorry about your back, officer.

While priced from $41,000, Ford says police agencies go through a competitive bid process with local dealers who set the final price, so pricing will vary. To date, Ford has about 8,000 orders for the 2020 Police Interceptor Utility, about 1,000 of those are for the hybrid,and 800-1,000 are for the 3.0-liter twin-turbo V-6, and the rest are for the 3.3-liter V-6. Ford thinks the mix will change when it ramps up the marketing of the hybrid. The idea of more than 500 miles to a tank of gas could be appealing.

I’ve had only limited exposure to the new Ford Interceptor, but it’s enough to realize that this cop car is faster, more efficient, and better designed for police duty than the outgoing model.

Ford provided travel and lunch to Internet Brands Automotive to bring you this firsthand report.