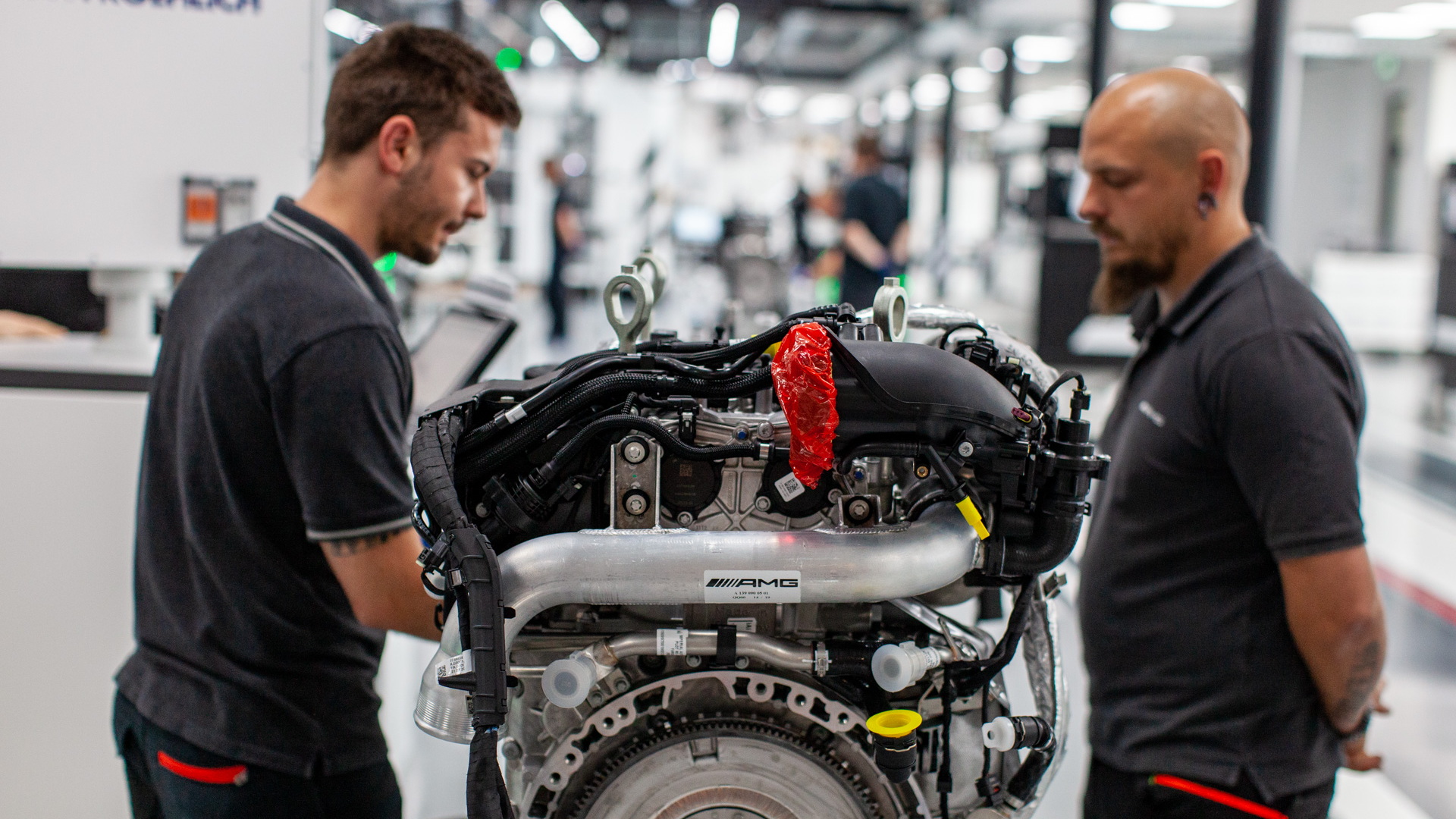 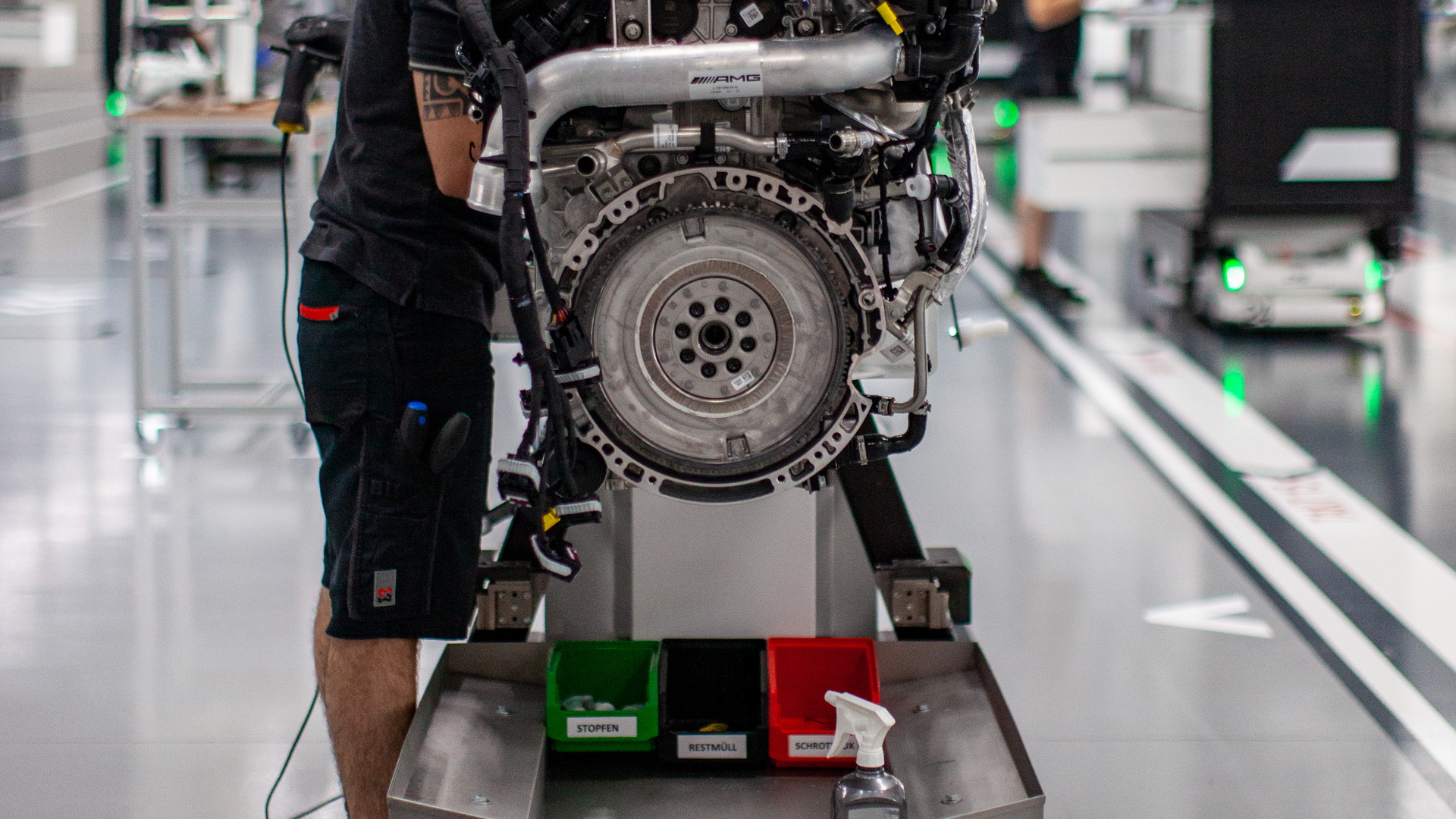 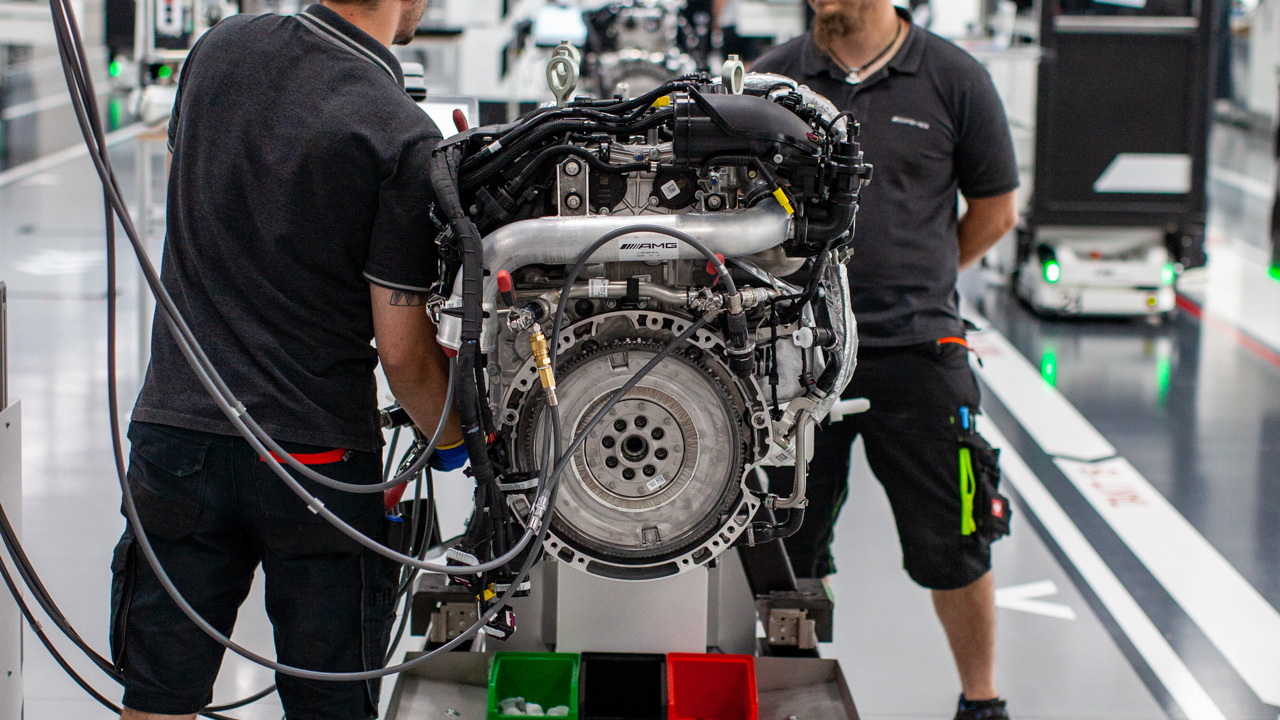 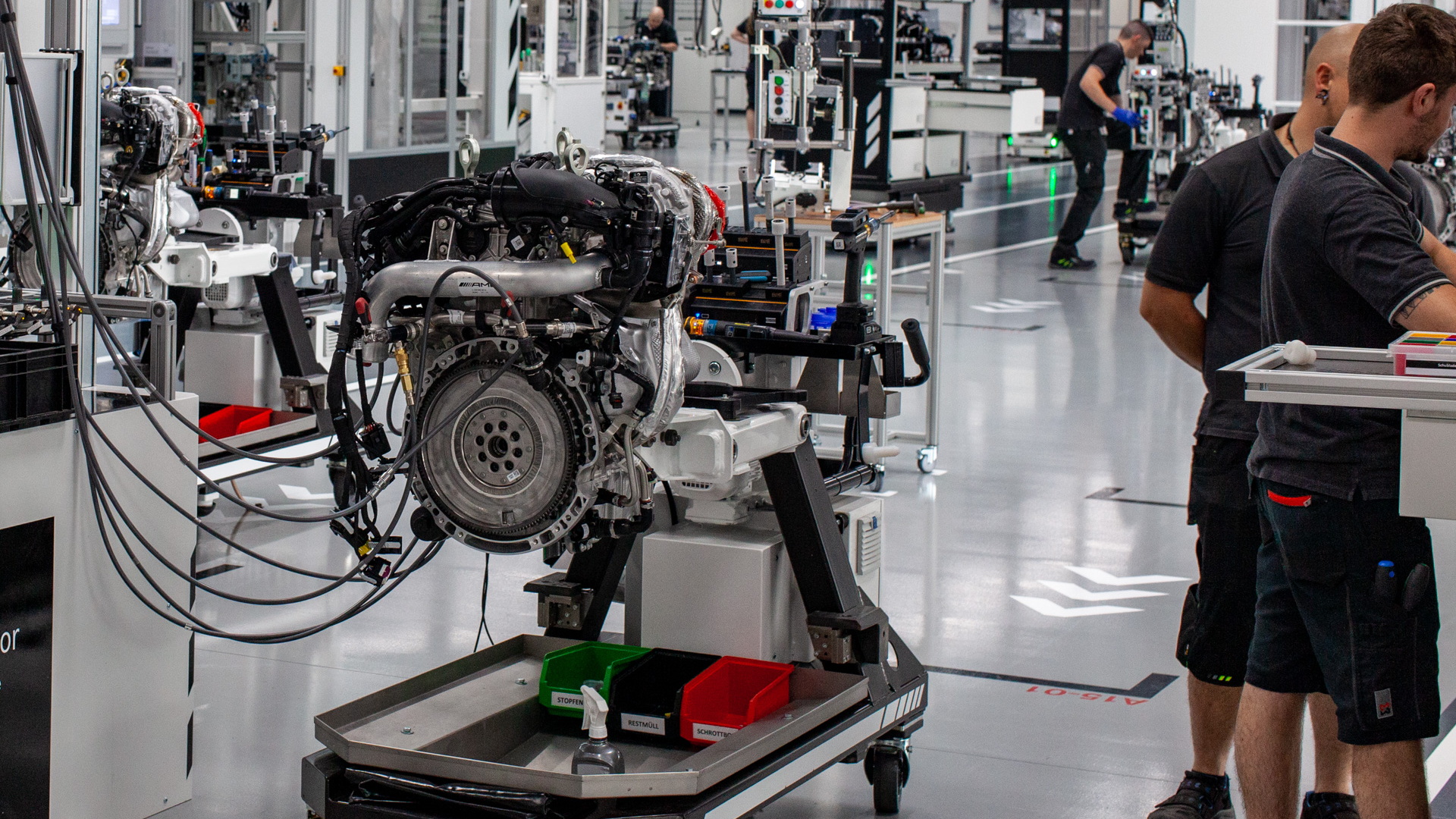 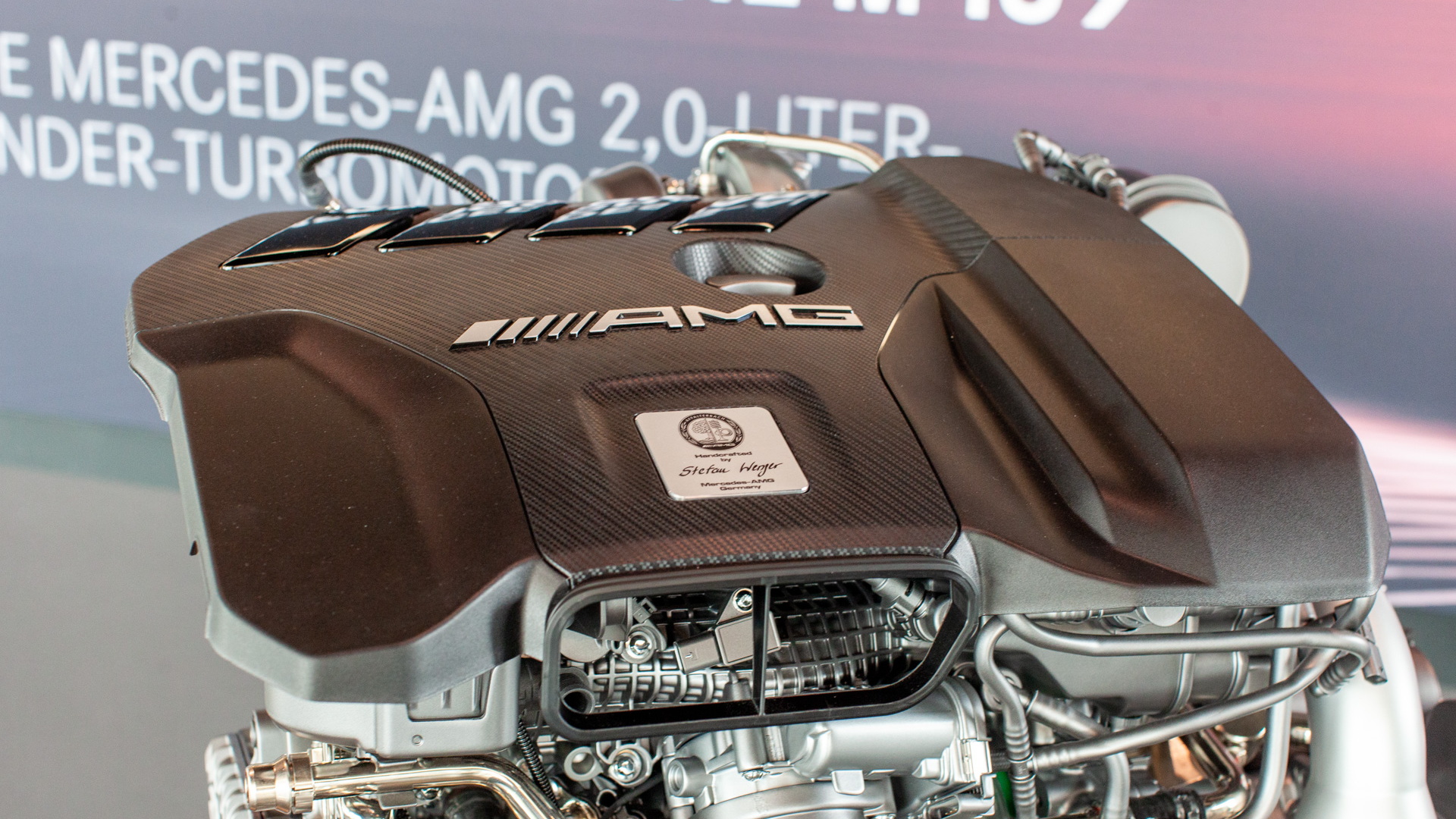 A smaller package just got a bigger bang.

On Friday, Mercedes-Benz AMG unveiled its most power-dense engine yet, a 416-horsepower turbo-4 destined for the automaker’s 45 Series line sometime soon.

The 2.0-liter turbo-4 is the replacement for the 381-hp engine found underhood the CLA45, GLA45. The new engine, which comes in two tunes including a 382-hp base version and a 416-hp S version, uses a more efficient turbocharger and upgraded cooling to improve performance and could arrive in future AMG 45-Series cars including the GLA45, CLA45, and A45—perhaps more.

The new turbo-4 uses a new all-aluminum cylinder block with identical dimensions to the outgoing engine, and most of its components are new. Compared to the outgoing version, the new engine is flipped in the engine bay and places the turbochargers and exhaust manifold closer to the firewall with the intake up front. It’s an evolution of the AMG principal, “Hot stuff and cold stuff don’t mix,” although it created very specific problems.

Namely, cooling the new engine with turbos placed so far into the engine bay was a significant challenge, according to engineers. The new engine features separate cooling systems for the block and the cylinder heads, 18% larger exhaust valves, and a specially designed engine cover that redirects air toward the turbochargers for more cooling. The air conditioner can also further cool the engine. The cylinder coating is slicker too, and the 0W-20 oil it uses in is a lower viscosity for better cooling. The electronic wastegate, which is more efficient this time around, was designed to handle more heat.

At its heart, new turbos force-feed the turbo-4 more air for bigger power. The compression ratio was increased from 8.6:1 to 9.0:1, and although its 416 hp (in S versions) was rated with 95-octane fuel, AMG said when it arrives in the U.S. the new engine should rate well on 93-octane gasoline—even run on lower octane fuel if needed. The new turbochargers spin up to 169,000 rpm and create 30.5psi of boost pressure, compared to 26.1 psi for the outgoing turbocharger. That’s partially due to roller bearings used in the twin-scroll turbo that let it spin more freely, similar to the AMG GT 4-Door Coupe’s twin-scroll turbos found in the twin-turbo 4.0-liter V-8.

When it was announced, the outgoing engine’s 187.5 hp per liter of displacement in the GLA45 and CLA45 was the most power dense production engine on the planet. The new engine unveiled Thursday takes over that top spot and is the most powerful production turbo-4 built from a mainstream automaker with 208 hp per liter

The new turbo-4 also debuts AMG’s newest production process that still pairs one engine technician with one engine, but partially automates the manufacturing process with carts and tools that travel along the production line with engineers automatically.

Power to the people

When the engines first appear in AMG 45 Series cars later this year, their power delivery could surprise fans of the small cars. That’s because the outgoing engine in the GLA45 and CLA45 had a flatter torque curve that arrived quickly and stayed flat throughout most of the rev range.

"We already set the benchmark in the segment with the preceding engine,” AMG boss Tobias Moers said. “Not only is the output per liter unrivalled for a turbocharged engine, the high level of efficiency also demonstrates that the internal combustion engine still has further potential."

AMG didn’t say anything about the new turbo-4’s future, but compared to the twin-turbo V-6 found in 43 Series models, the new engine can make more horsepower and nearly the same amount of torque.

We’ll know more when the engine hits the streets in the U.S., which should be later this year.