Two patents Apple recently filed may shed some light on the tech giant's long-rumored plan to build its own automobile. The two latest patents involve structural elements, and they follow up on earlier filings for various systems and engineering elements for a car

Apple Insider dissected the two patents in a Tuesday report. The first patent is called "passenger vehicle and door structure," which as it sounds, surrounds the door assembly. Instead of a traditional door with a pillar, Apple's patent describes doors that open with outward hinges. What's referred to as the B-pillar in traditional cars is absent. Instead, the hinged would allow the door to open without a break interfering with the body of the car. It would also provide a large window opening for passengers.

Rather than using a traditional pillar to maintain structural rigidity, Apple proposed using diagonal sections that run from the top of the hinge down to the floor where both of the doors meet. It's hardly a sexy drawing, but the photo below shows where Apple would place the diagonal support sections within the doors. 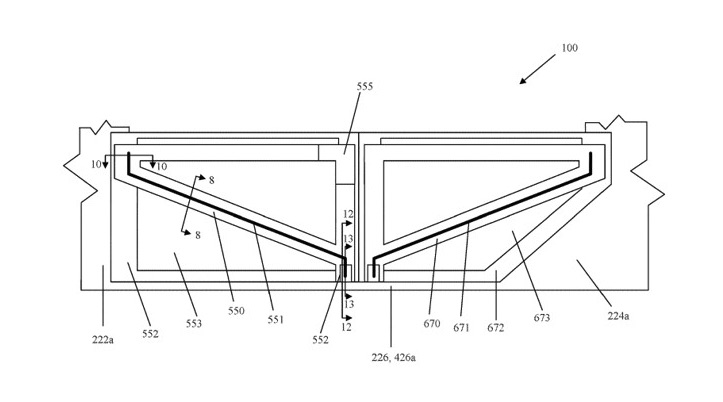 While Apple thinks about revolutionizing door designs, the automaker is also apparently working to integrate batteries for an electric car in a new way. The second patent Apple filed talks about a vehicle floor engineered for structural integrity, but without enough space to slot batteries between an upper and lower floor assembly. The assembly method calls for an upper and lower plate, while a vertical core adheres to both structures. Wherever the vehicle needs more strength, the plates can vary in size and thickness to meet various demands.

Energy absorbing pockets may also protect the "battery floor" in the event of a crash. Also detailed in the patent is how Apple would manufacture the structure.

Patents are hardly a clear-cut sign a company has plans to put something into production. Yet with so many patents involving vehicles and their systems, perhaps Apple's Project Titan has a new lease on life in Palo Alto.