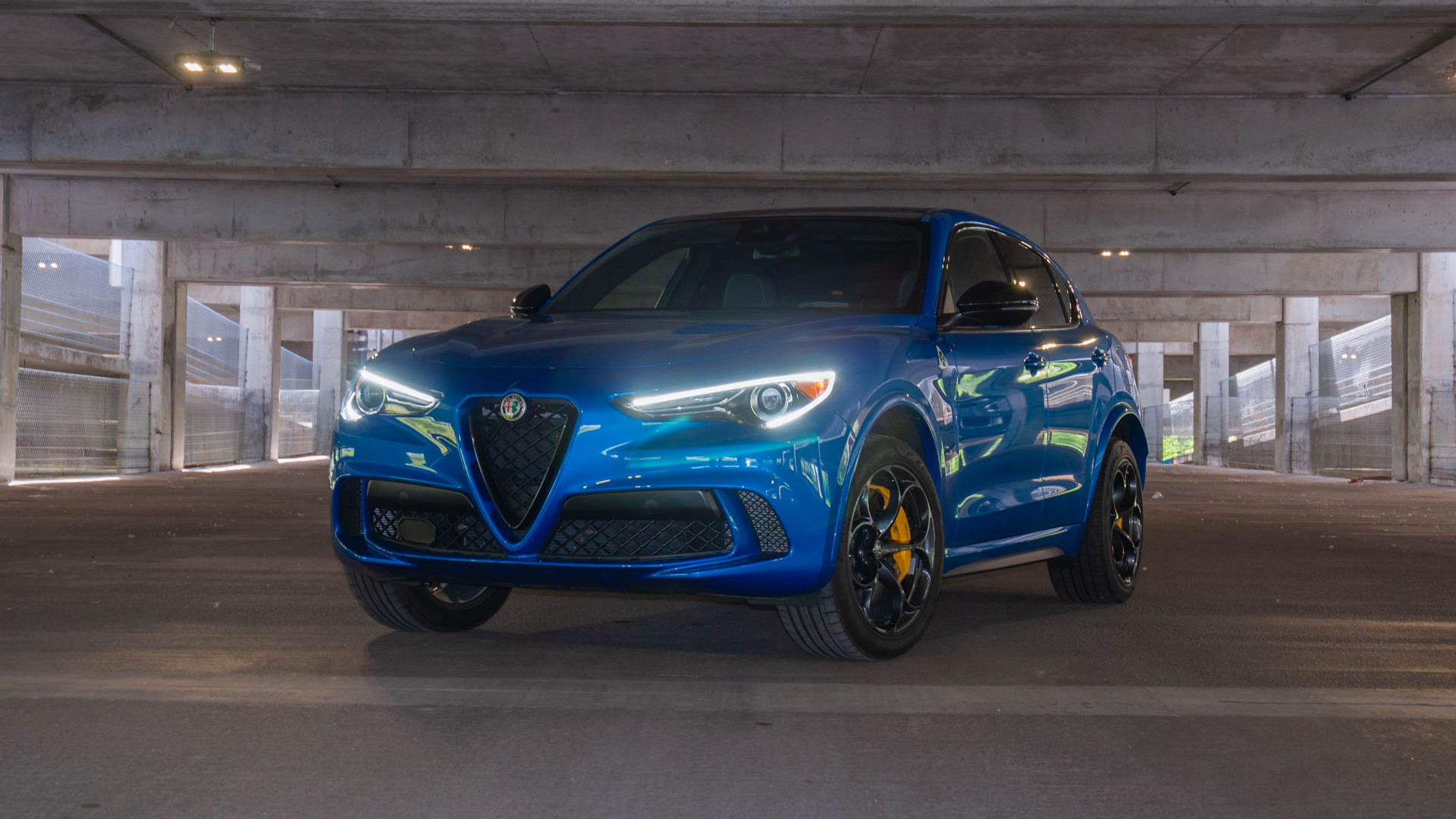 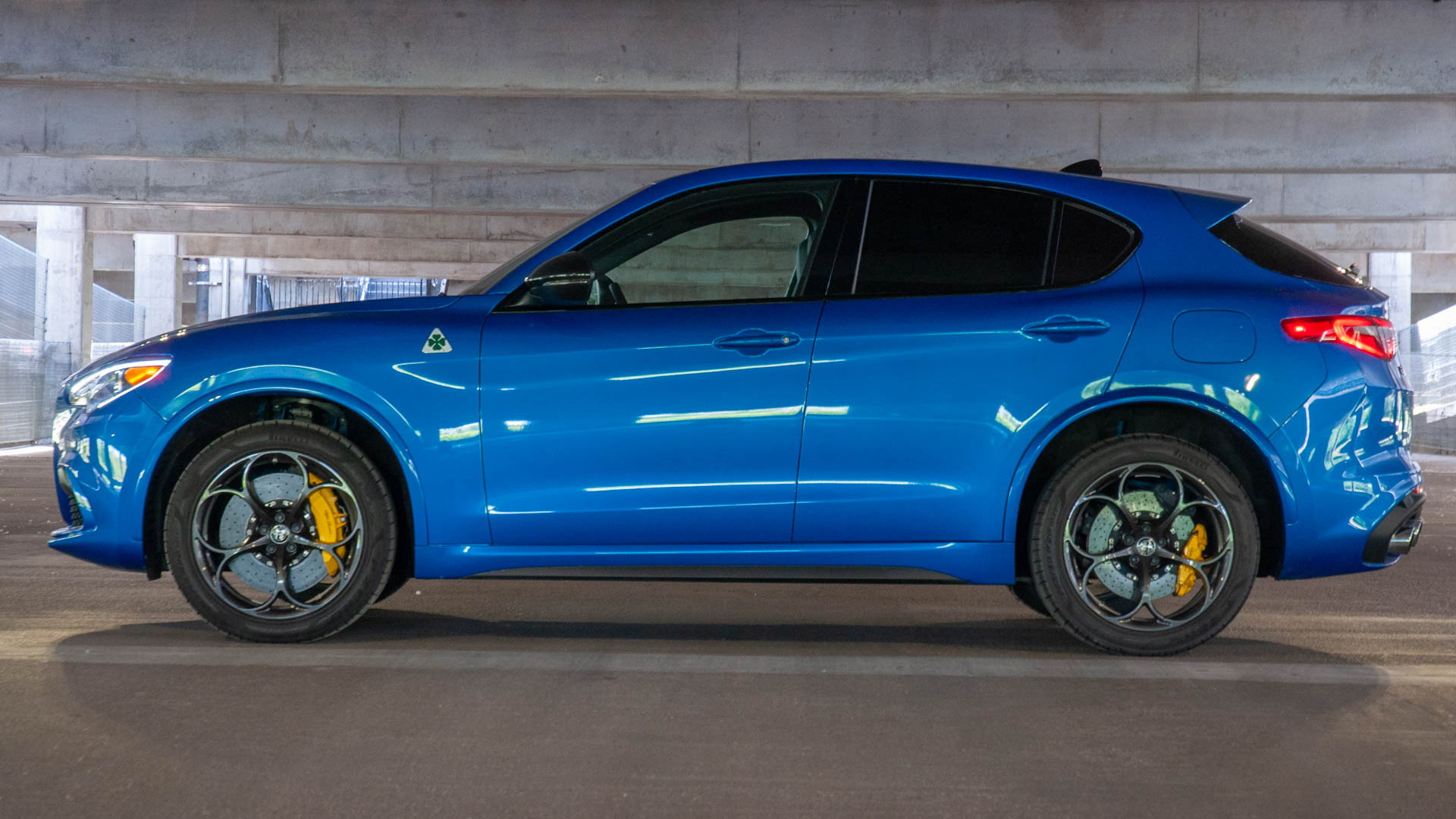 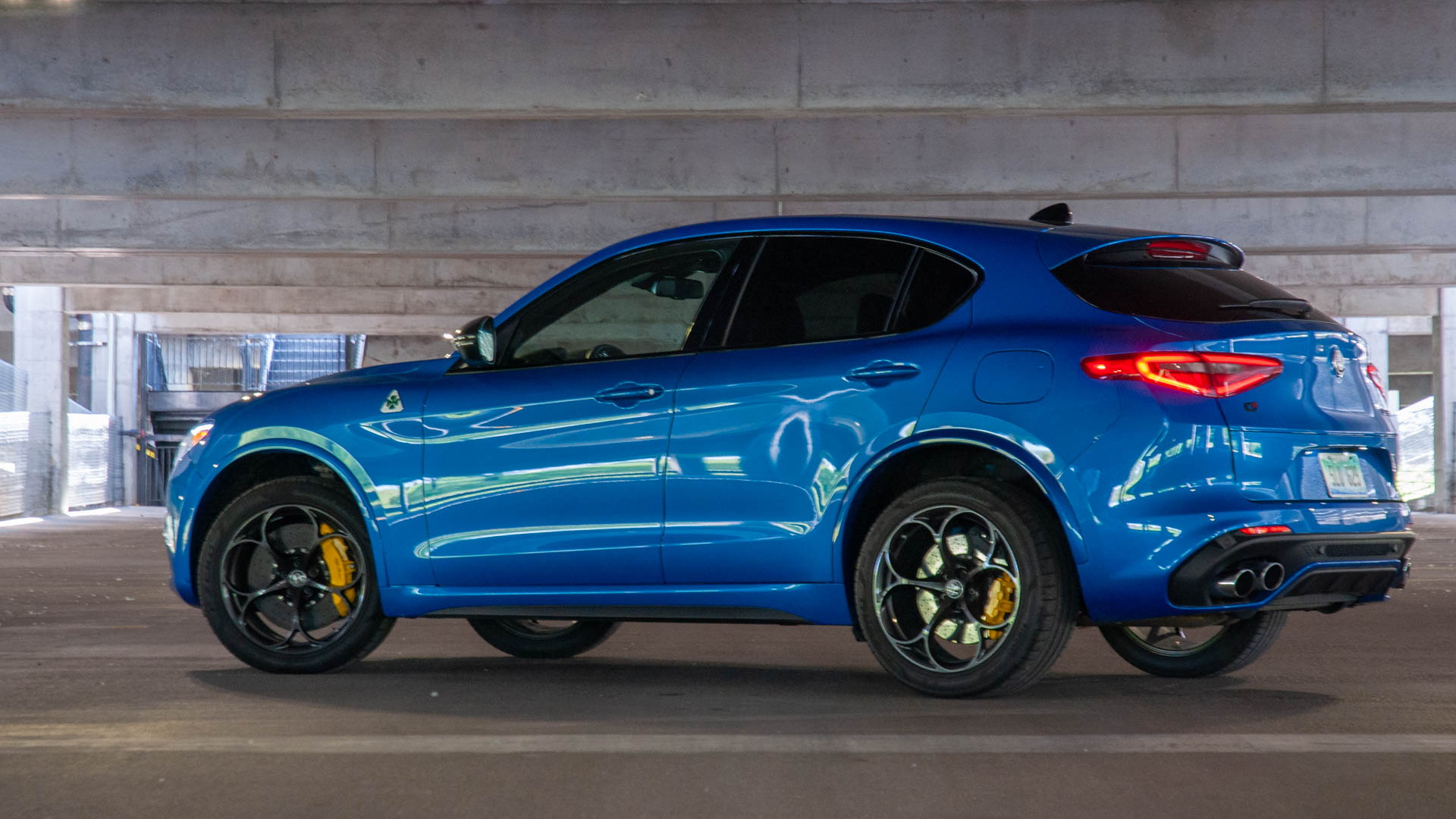 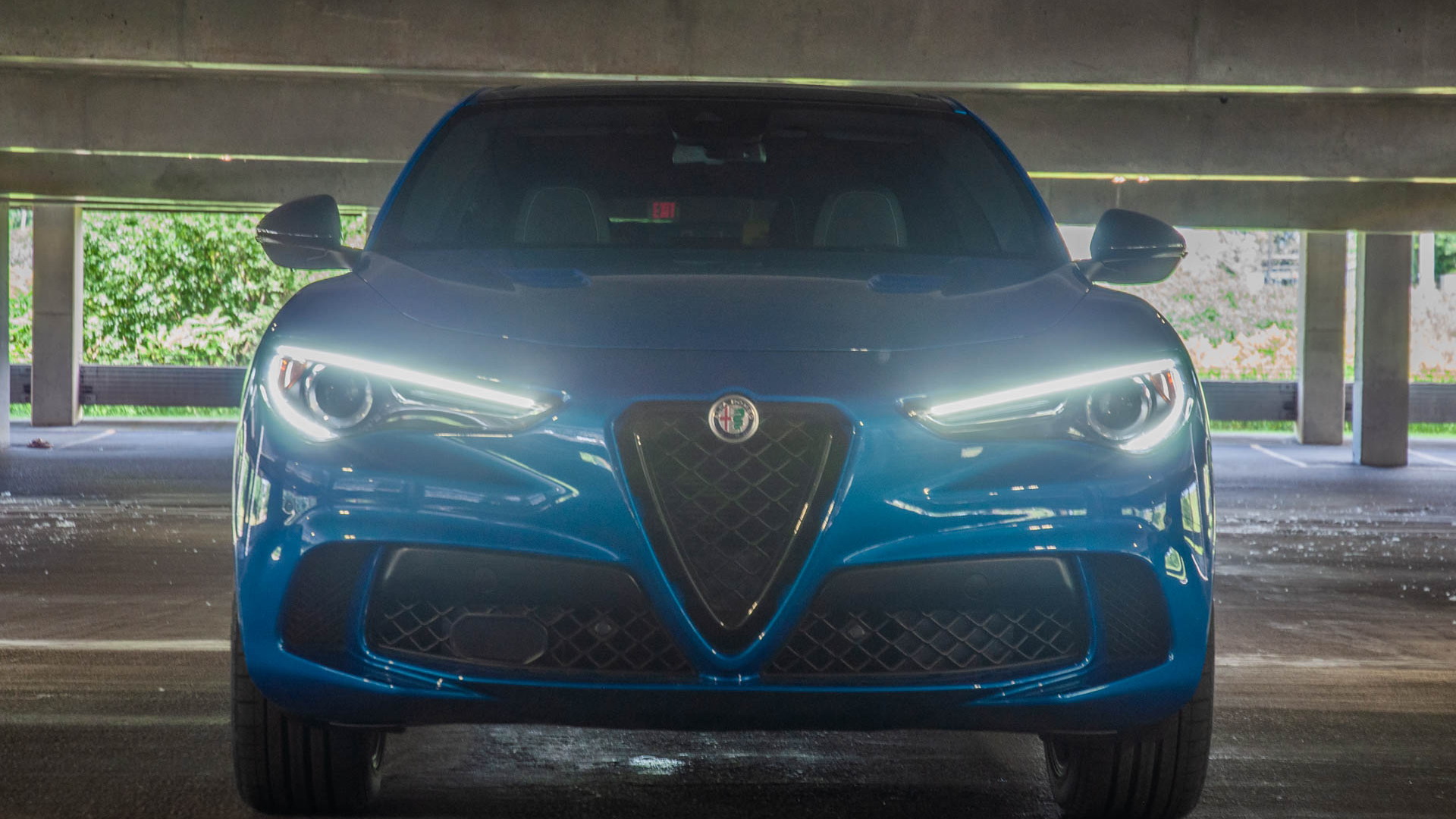 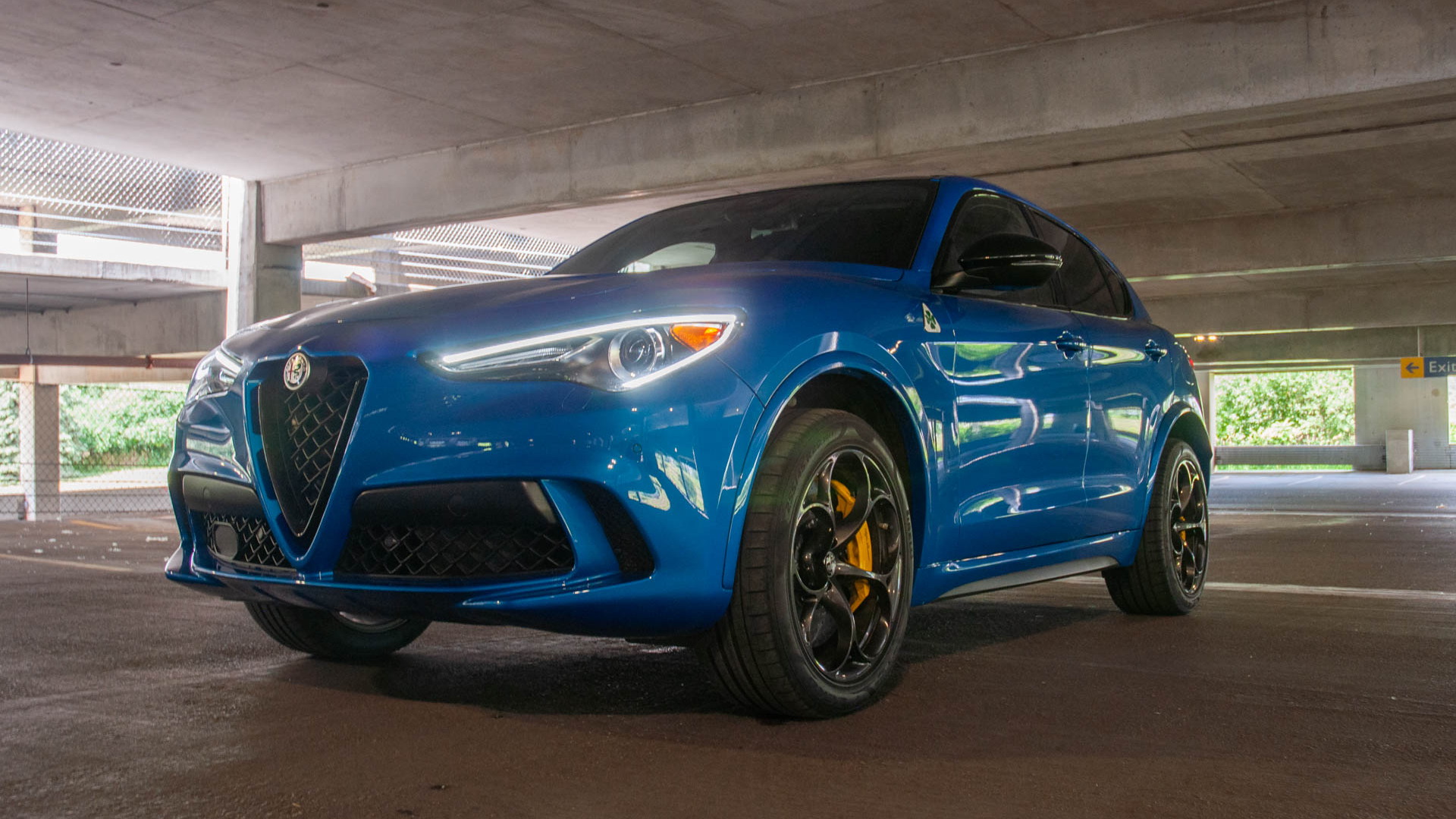 No one would ever call the Alfa Romeo Stelvio Quadrifoglio slow, sloppy, or anything less than precise. But “refined?” Well...

As a remedy, Alfa Romeo sent the 2020 Stelvio to finishing school to upgrade its interior and make its technology easier to use. The hooligan of the family, the Quadrifoglio, tagged along, but kept its long hair and snarky attitude with its fire-breathing engine and predator-like stance.

A better interior hasn’t changed the Stelvio Quadrifoglio; it’s still a baby Ferrari in Alfa Romeo crossover SUV clothes. The Ferrari-inspired 2.9-liter twin-turbo V-6 still fires out 505 horsepower and 443 pound-feet of torque to all four wheels, which is 225 hp and 137 lb-ft more than the comparatively pedestrian Stelvio.

The 2020 Alfa Romeo Stelvio Quadrifoglio exists because the world needs a spicy Italian-bred, high-horsepower crossover SUV. It just took a few years for the interior’s bits to feel finished. 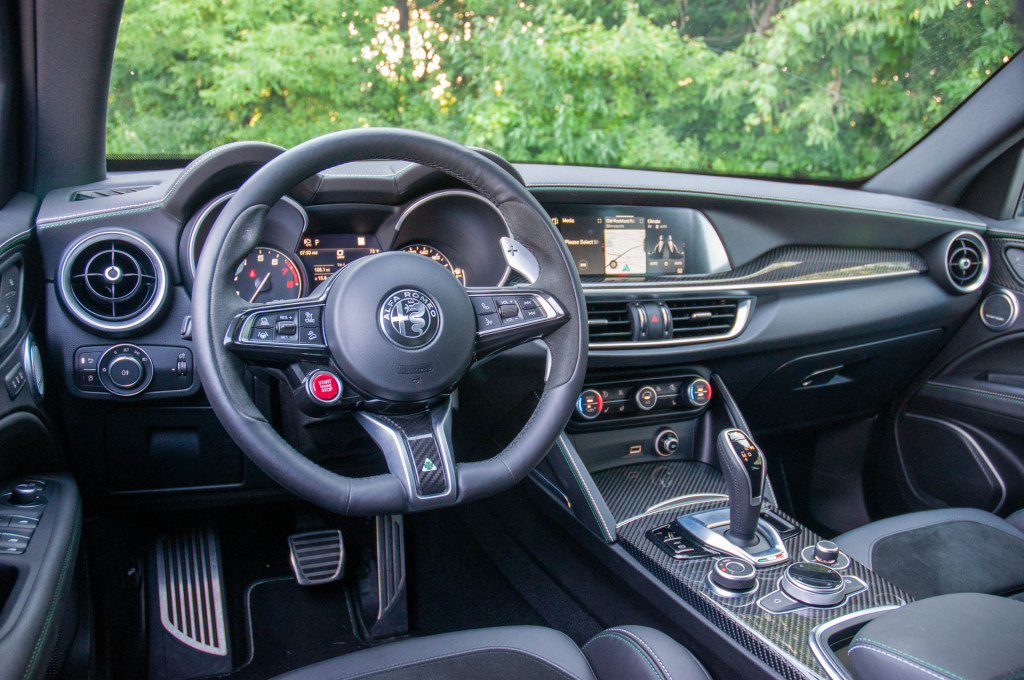 It’s what’s inside that counts

Tug the door handle, hear the delicate click of the lock, open the door, and slide onto the Stelvio Quadrifoglio’s molto bolstered leather and Alcantara front sport seats. The dashboard looks familiar with the 7.0-inch digital instrument panel between the large, easy-to-read analog gauges, but despite looking the same, the 8.8-inch infotainment screen is new. It’s now a touchscreen with a tile-like interface with each tile controlling a system function such as navigation, climate control, or Apple Car Play and Android Auto. The tiles can be rearranged like a tablet.

The interface is easier to use than the 2019 model, but like the non-Quadrifoglio models, the capacitive glass touchscreen is covered by matte plastic that makes it less accurate, less responsive, and sometimes washed out in the sunlight.

Other small, but meaningful, upgrades for 2020 that were ported over from less powerful Stelvios include a shift knob that’s now wrapped in leather and no longer feels like it’ll cut you. Despite having a touchscreen, a center console-mounted rotary controller for the infotainment system returns and feels more solid. 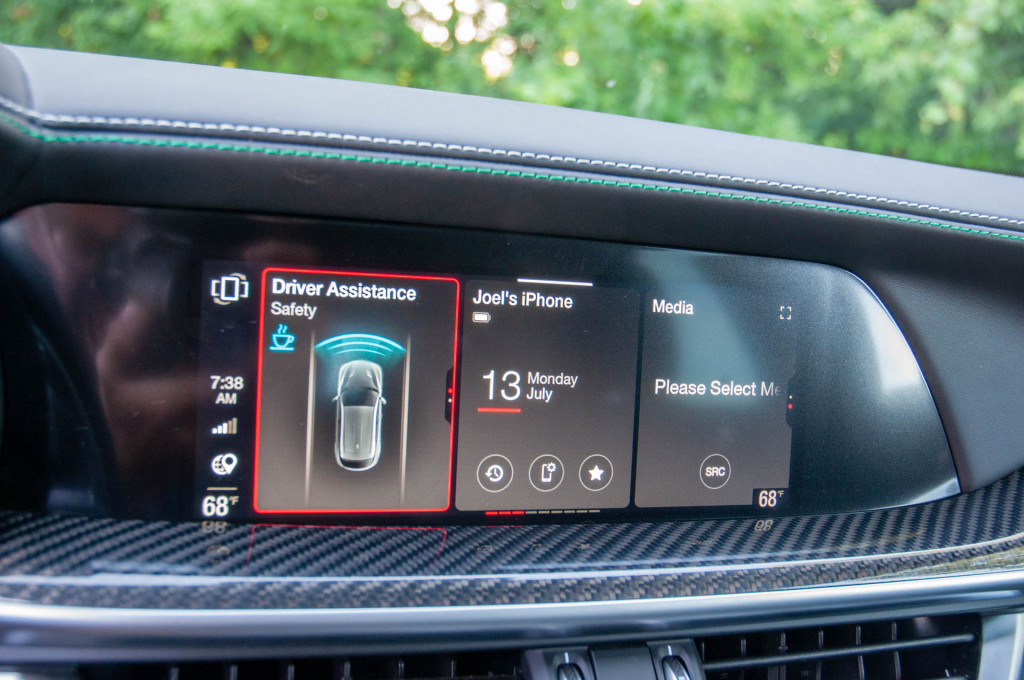 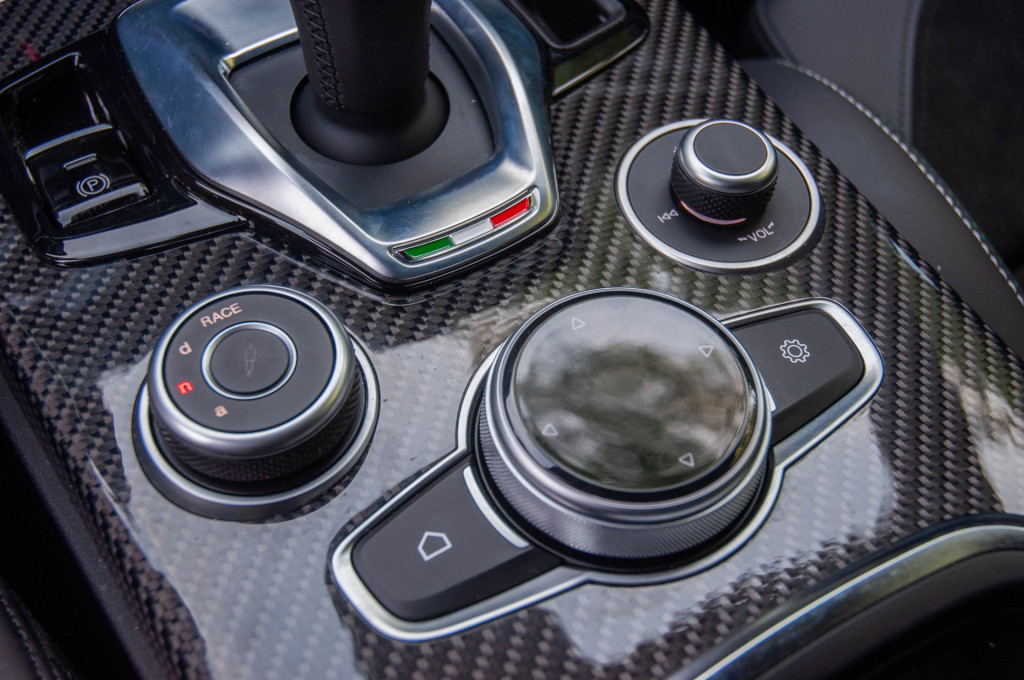 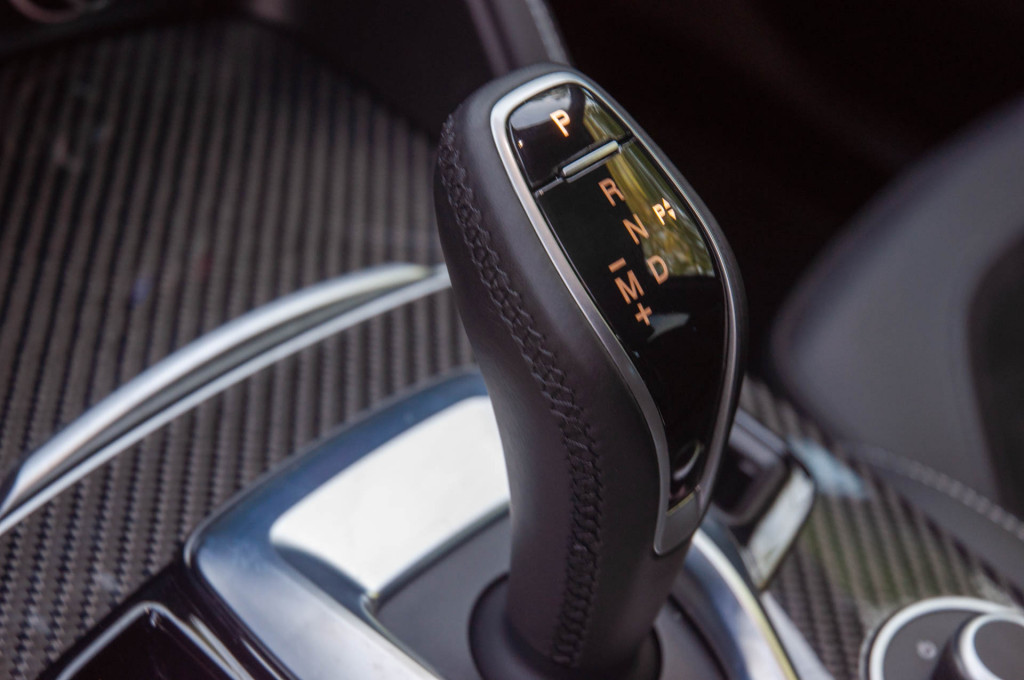 The plastic controls and rubbery-feeling lower plastics on the doors and dashboard still scream “nice Mazda” rather than “oh, Porsche” while the leather-topped dashboard topper feels soft and straight from a Maserati.

Sometimes it’s the smallest details that get you, such as my tester’s white and green stitching on the door uppers, seats, and dashboard. It looks great, but the extra line of stitching in the middle of the passenger side of the dashboard reflects onto the windshield while driving and is annoying in my field of vision. 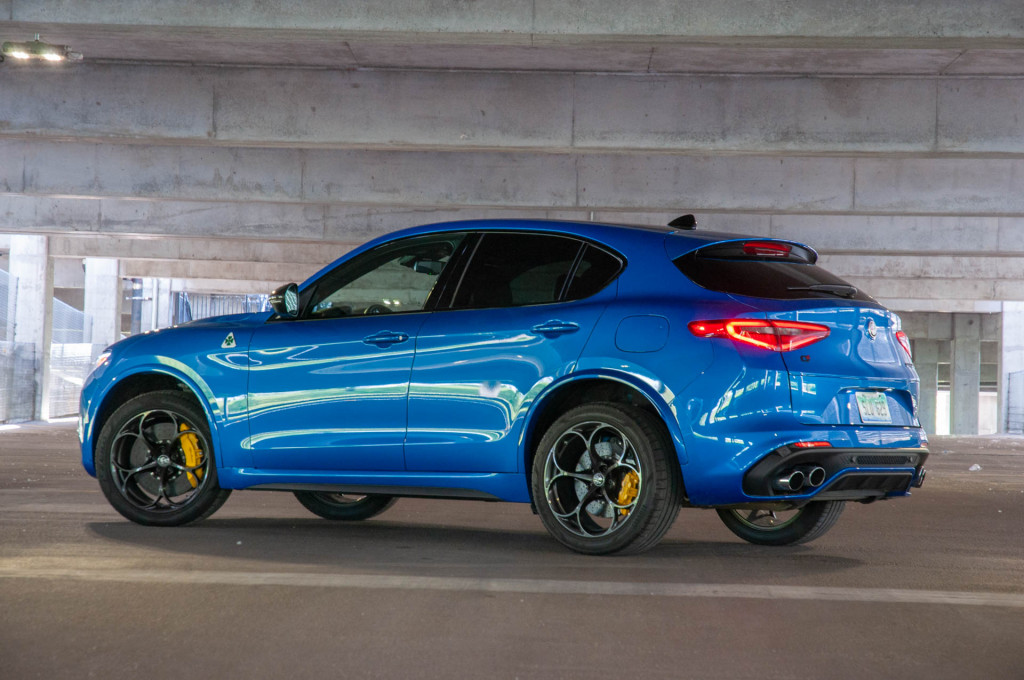 It’ll take a keen eye to discern a 2020 Stelvio Quadrifoglio from last year’s version. The front and rear badges feature new black accents while the taillights received a darker tint.

What didn’t change? The large quad exhaust setup, the gaping front intakes, and the hunkered-down stance on the wide, staggered, 20-inch wheels wrapped in Pirelli P Zero tires. The sensual curves, taut lines, and rounded corners all keep the Stelvio Quadrifoglio in its place as one of the sexiest looking crossover SUVs on the market. 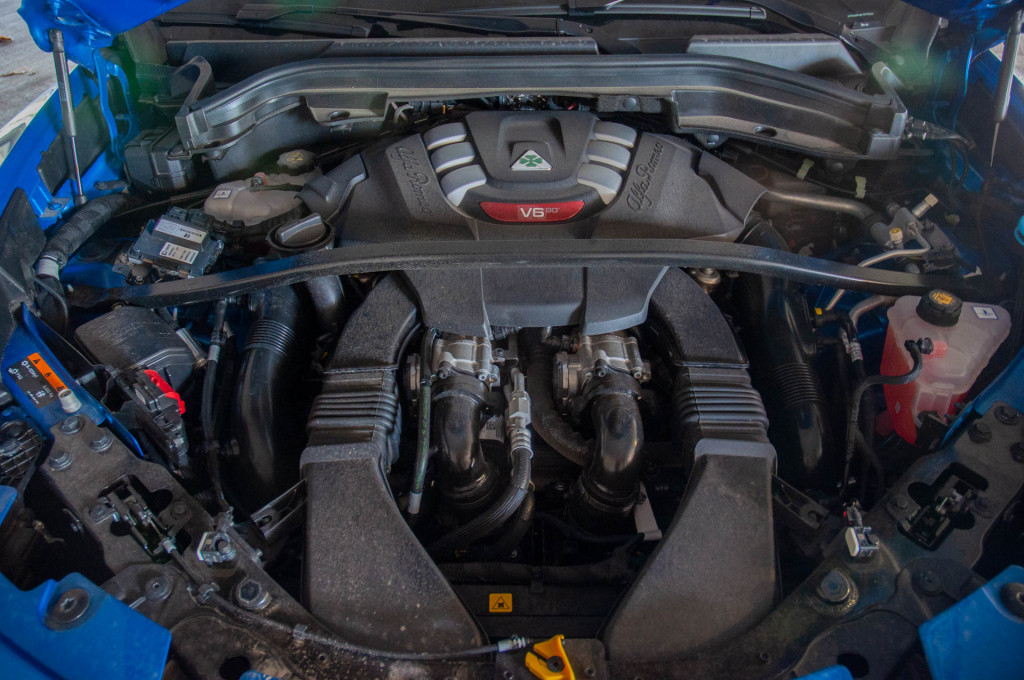 The Stelvio Quadrifoglio’s interior and technology were updated but it’s powertrain stayed the same. The 2.9-liter twin-turbo V-6 with 505 hp and 443 lb-ft of torque is still raspy with loud pops under full throttle with the active exhaust baffles. The violent 0-to-60-mph sprint still takes 3.9 seconds with the 8-speed automatic snapping off quick, clean, crisp shifts. The power is sent to all four wheels with no rear-wheel-drive-only burnout mode. The chassis and all 4,313 pounds of Italian crossover remain unflappable and lithe, whether attacking a cloverleaf or blasting down a highway. It’s an Italian monster.

And yet the brake system remains the same flawed setup with no bite or progression from the strong brakes. The pedal feels wooden and is hard to modulate in stop-and-go traffic. The issue stems from the brake-by-wire system that attempts to simulate the pressure of a hydraulic setup with a rubber block mounted behind the brake pedal. My tester’s optional $8,000 Brembo carbon ceramic brake rotors were slightly easier to modulate than the standard steel rotors, but the word “smooth” doesn’t apply here. 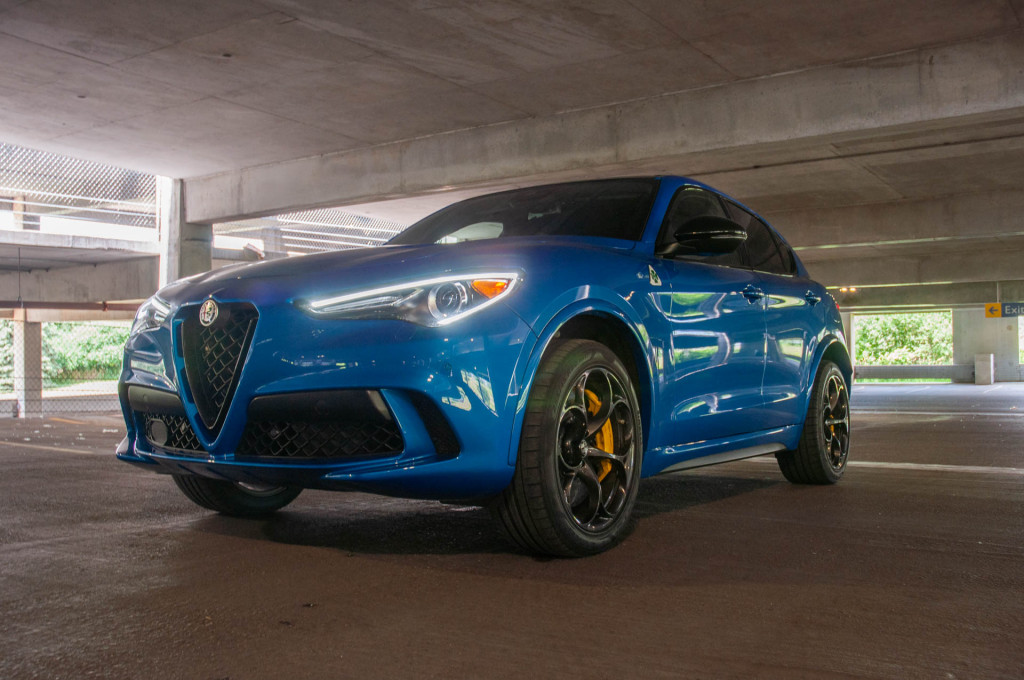 The same but better

At $96,540 as tested, the 2020 Alfa Romeo Stelvio Quadrifoglio continues to be a mediocre luxury crossover SUV in some ways, but still one of the best-driving crossovers money can buy.