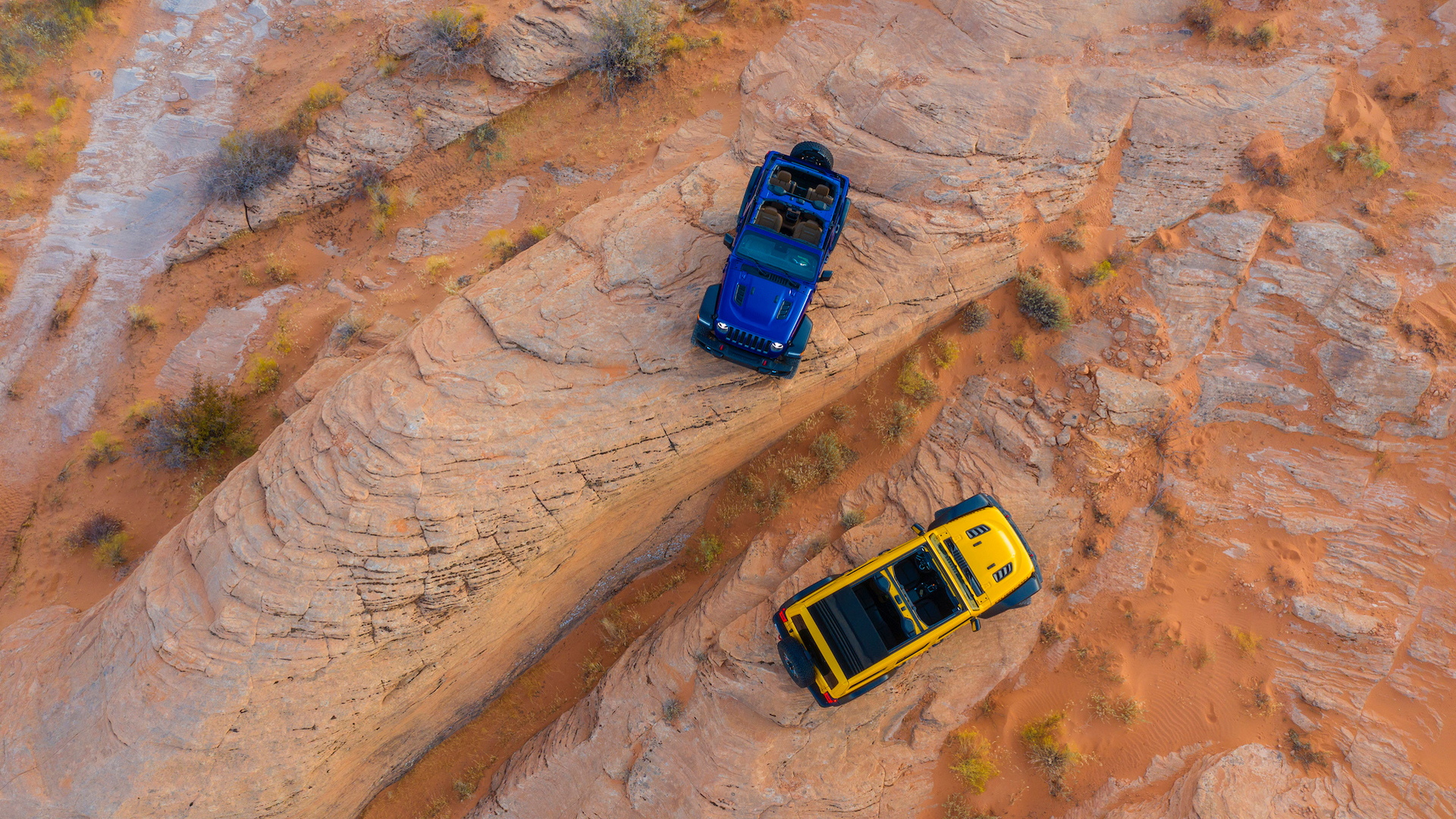 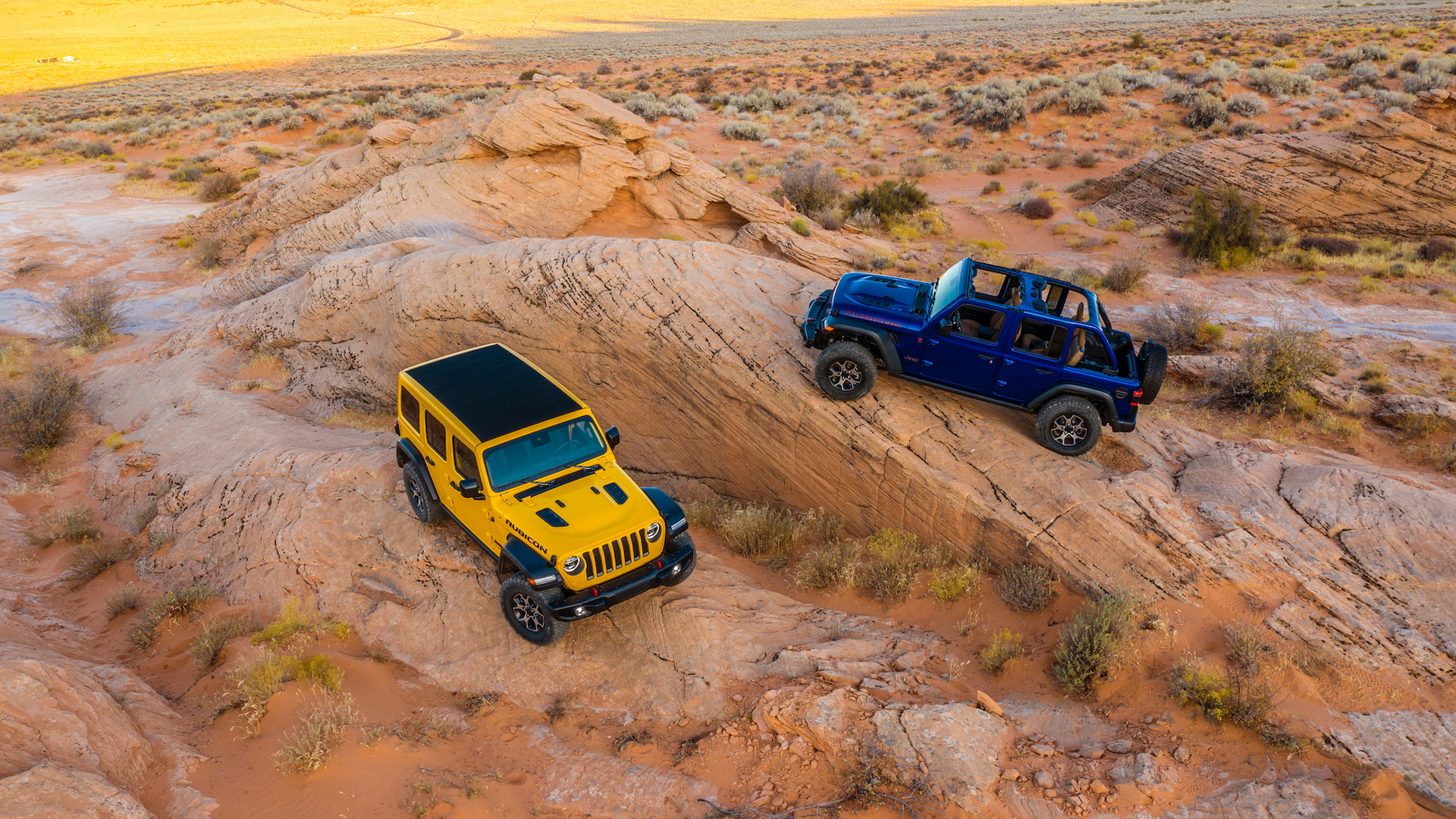 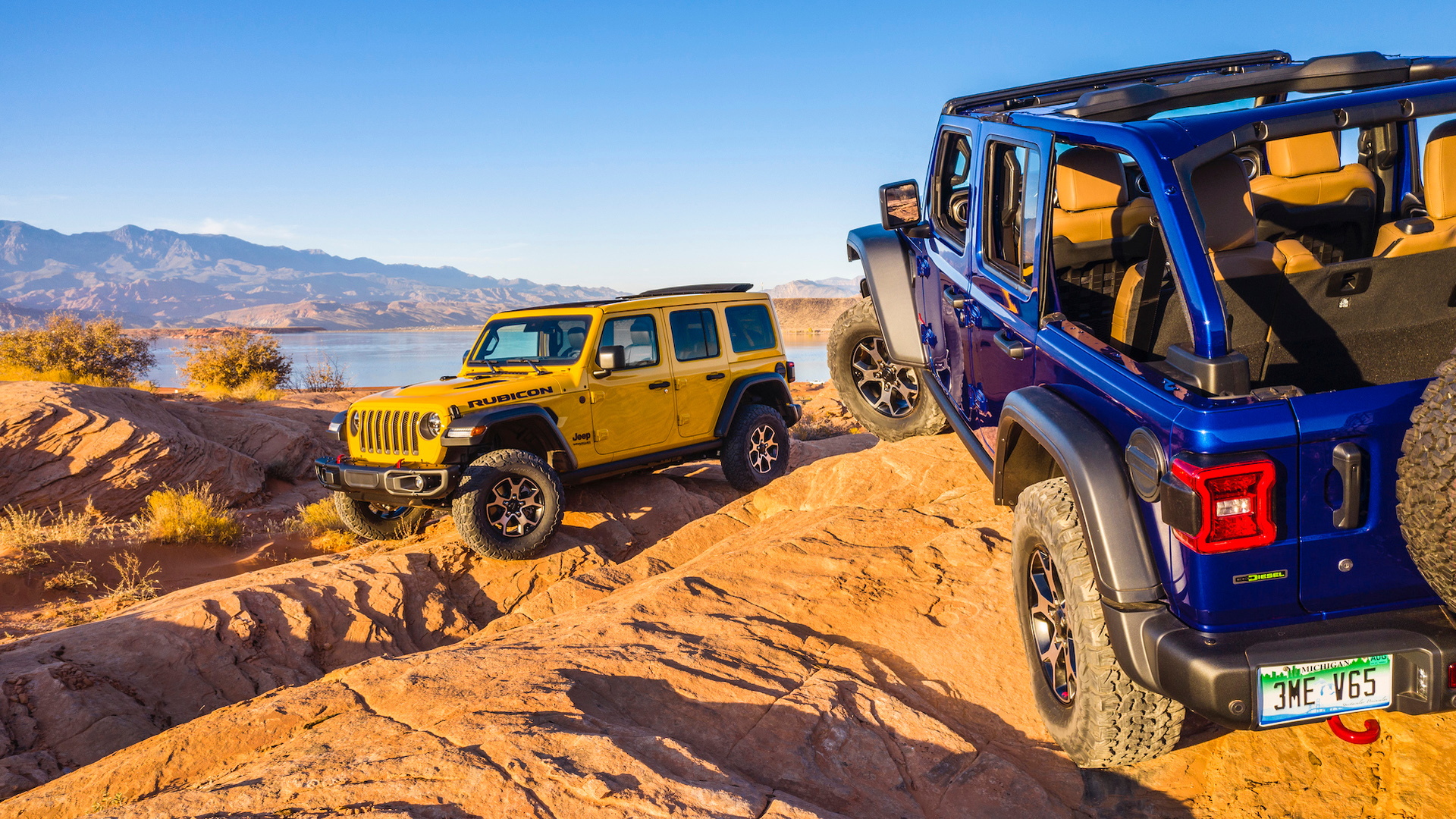 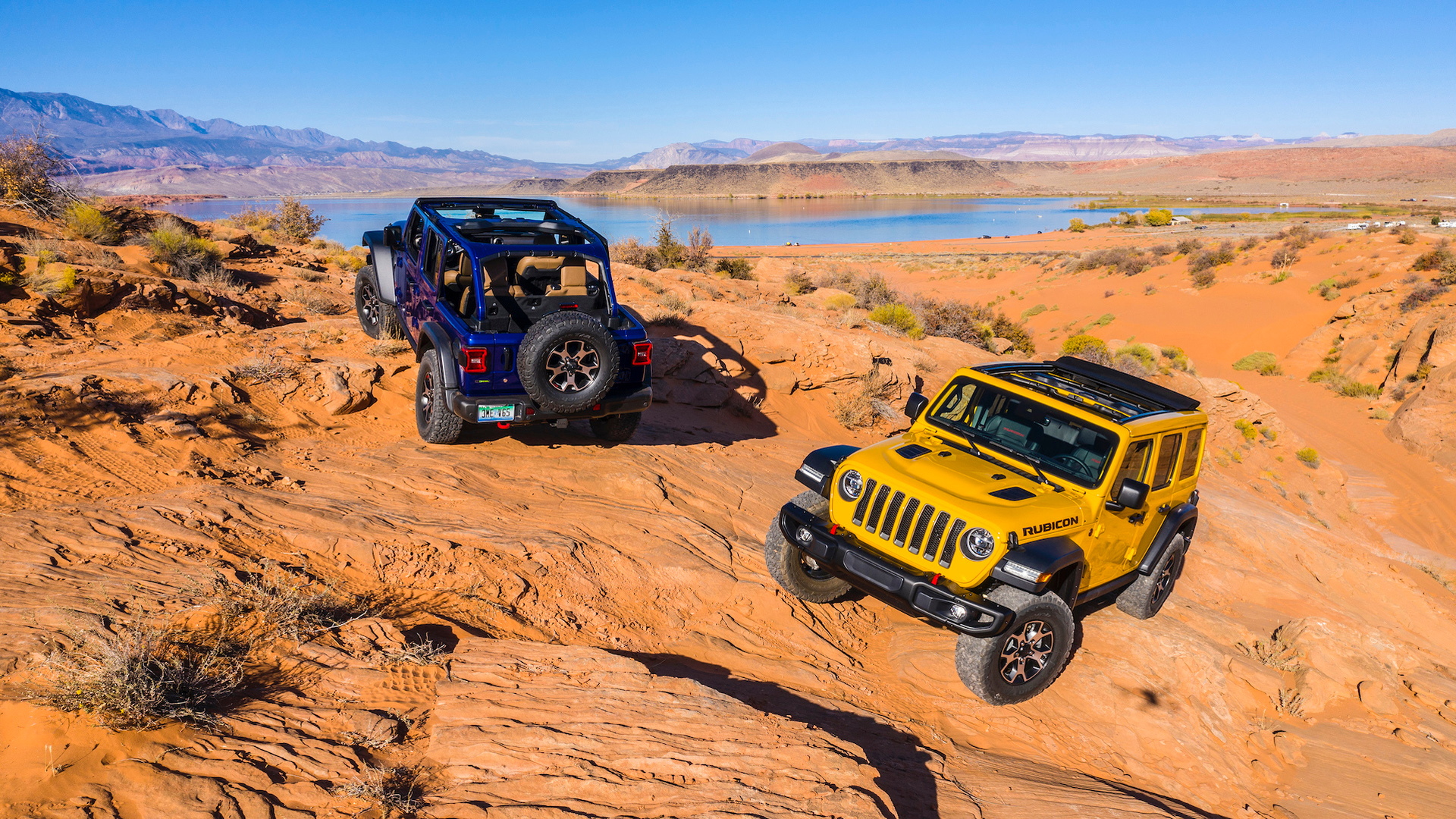 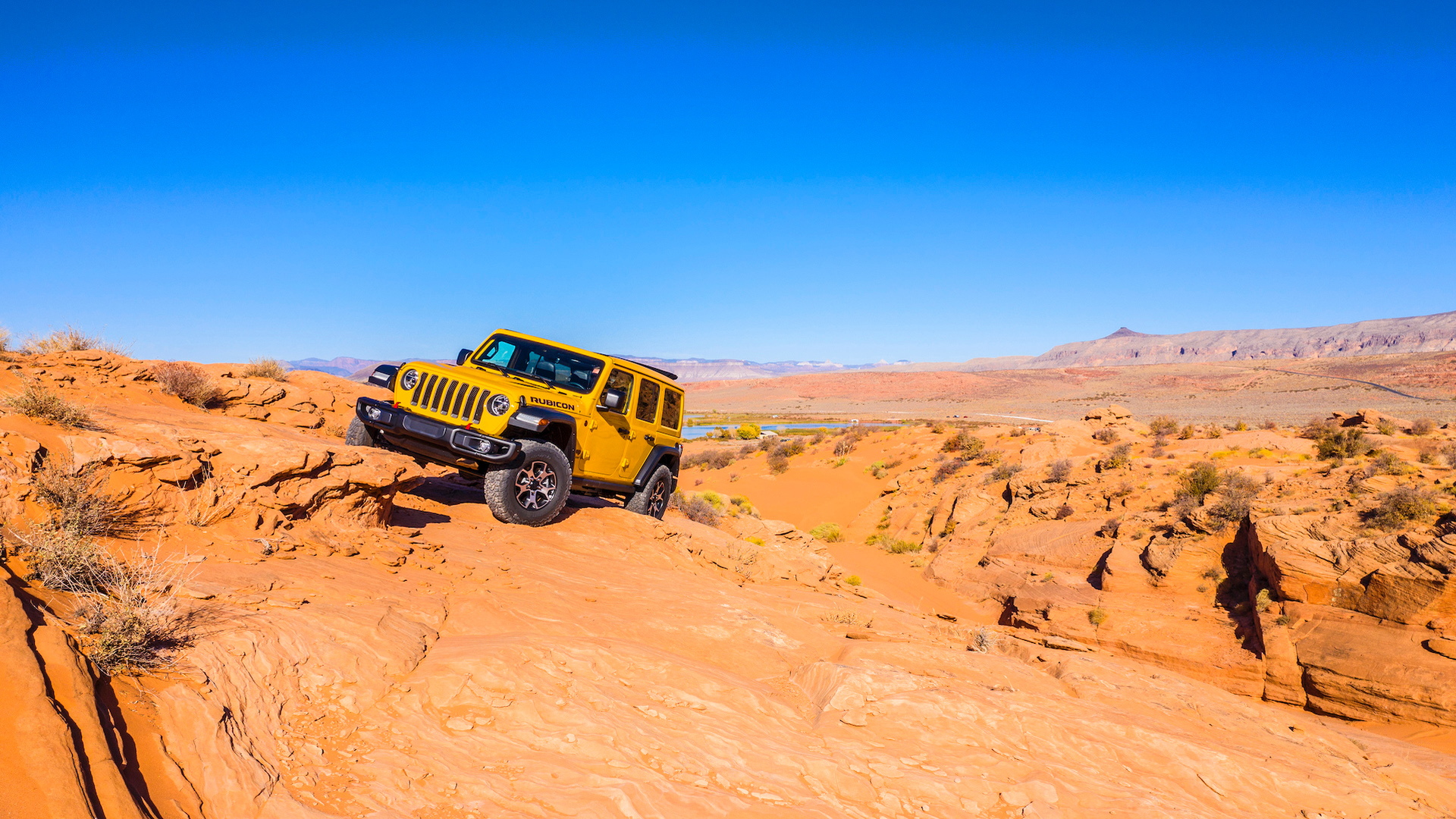 Not all is what it seems here in Dixie, where the cotton grows high against the canyon walls and the only greenery in the arid landscape is the occasional golf course.

In this case, Dixie is what the locals call the cotton-producing stretch of Southern Utah that runs a few miles north of the Arizona border from the booming retirement town of St. George to the deep canyons of Zion National Park. The 2020 Jeep Wrangler Ecodiesel embodies an unexpected contrast of its own in these quiet communities packed with low-roof houses swathed in various shades of beige. Behind its seven-slat grille and beneath a hood secured by beefy plastic latches, a V-6 clatters and rumbles. The sound is distantly similar to the big-rig trucks that haul cotton to local processing plants.

After years of rumors, the diesel-powered Wrangler is finally a reality in the U.S. Jeep offered the CJ with a diesel engine in the 1960s, but until now the Wrangler has never been powered by an oil burner. The diesel engine is a familiar one, a turbocharged 3.0-liter V-6 rated at 260 horsepower and 442 pound-feet of torque. The engine comes from Italy and is bolted to a German 8-speed automatic transmission, both sources unimaginable to the first Jeep pilots nearly 80 years ago.

This version of the turbodiesel V-6 is modified from the engine used in the Ram 1500 with a raised intake and other tweaks to give the diesel Wrangler the same 30-inch water-fording rating as its gas siblings.

Don’t look for a manual gearbox. Opting for the turbodiesel V-6 requires first selecting the $2,000 8-speed automatic transmission, something Jeep admits around 90 percent of buyers do anyway. From there, the diesel is a $3,250-$4,500 option, depending on the trim level. The engine hasn’t been certified yet by the EPA, though Jeep suggests fuel economy ratings are imminent. Figure nearly 30 mpg on the highway, or around 4-5 mpg higher than the standard Wrangler. That’s good, but it will never recoup the $5,250-$6,500 price admission for most drivers.

The calling cards: power and range

The diesel instead trades on its power and range—Jeep figures upward of 500 miles from the 18.3-gallon fuel tank. Positioned behind the tank is a 5.1-gallon DEF tank good for around 10,000 miles of urea that is splashed into the exhaust to reduce emissions.

The engine’s torque comes on in full force from just 1,400 rpm. With a 4,400-rpm redline, the engine is easy to keep in its power band. The diesel Jeep doesn’t spin its tires from a stop, but power pours on steadily and forcefully like it’s poured from a bottle of maple syrup. Highway passing is a cinch, especially compared to the Wrangler’s relatively high-strung V-6. With its brick-like shape and 4,800-pound curb weight—the diesel adds around 400 pounds—this plump Jeep punches a big, square hole in the air.

The diesel has a unique sound-deadening package, but it doesn’t contribute meaningfully to that extra weight. At idle, the turbodiesel V-6 clatters away distantly. Tip into the throttle and it rattles like a coffee can full of gravel. Vibrations are kept to a minimum, and the standard stop/start system operates quietly, but the constant high-pitch ticking underhood becomes a nuisance eventually. However, that is often overcome by the predictably raucous wind and road noise endemic to—or part of the charm of—all Wranglers.

Big torque delivered at low engine speeds is an undeniable asset off-road. Overseas off-roaders have experienced it for years, and it helps to explain the popularity of diesel-powered Land Rovers and Toyota Land Cruisers in remote areas.

Wranglers come standard with four-wheel drive and a 2, part-time transfer case. Sport and Sahara trims have a 2.72:1 crawl ratio, while the Rubicon ups the ante considerably with its heavy-duty transfer case and 4.0:1 crawl ratio. Paired with front, center, and rear differential locks, as well as sway bars that disconnect at the tap of a button for increased articulation, the diesel-fueled Wrangler Rubicon I inched up a precipitous rocky ridge oozed confidence. Power came on smoothly with little need for revving, and the instantaneous power delivery felt like that of a well-modulated electric car.

Electric cars don’t rumble like the Wrangler Ecodiesel, so don’t expect to sneak up on anyone should you find yourself away from the pavement. The diesel engine thrums into the cabin more with the transfer case pulled into Low range than it does in High, and underhood clatter is a constant companion.

Jeep isn’t making the Selec-Trac transfer case with its full-time four-wheel-drive option available with the diesel engine, though an engineer said that’s more a complexity-reducing decision than any technical hurdle. That’s a shame as the full-time mode is a set-it-and-forget-it features that works well in rainy or slushy conditions.

With its extra torque, the diesel engine should provide more-confident towing, though Jeep says the 3,500-pound maximum trailer-lugging rating is unchanged from properly equipped gas models. That’s enough for a small camper, but don’t expect to use the Wrangler for heavy loads.

For now, the diesel Wrangler comes only in four-door guise and with the 8-speed automatic transmission. The engine is a line-item option available on all trim levels, from Sport to Sahara to Rubicon. About $39,300 buys a no-option Sport, but most buyers will add niceties like a hard top, power windows and locks, and upsized infotainment.

The Wrangler Sahara I drove was priced at a heady $55,000, with options including both hard and soft tops, an 8.4-inch infotainment touchscreen with Apple CarPlay and Android Auto compatibility, Bluetooth, various USB ports, and leather seats. Like gas-fueled Wranglers, the Sahara lacks opulence. Its manual front seats lack lumbar support and suffer from limited adjustability. The rear seats are a chore to access due to narrow lower door openings. Beefy roof pillars, a high dash, and a short, vertical windshield all hinder outward visibility.

A Wrangler Rubicon with the diesel will stretch just about any budget as it pushes its way toward $65,000 with every option chosen. Sometime next year, Jeep will offer the Wrangler-based Gladiator pickup with the diesel engine. An asking price of $70,000 for a loaded-up Gladiator Ecodiesel is likely. Nobody said off-roading is cheap.

That said, the diesel Wrangler has no rivals short of an old Land Cruiser imported from South America or Australia or an imported Land Rover Defender, and it’s not likely anyone will comparison-shop against those two. Moreover, Toyota is likely too conservative to drop its beefy turbodiesel V-8 into its American-market 4Runner TRD Pro (but, oh how we can dream), so the Wrangler Ecodiesel is likely to remain unchallenged here.