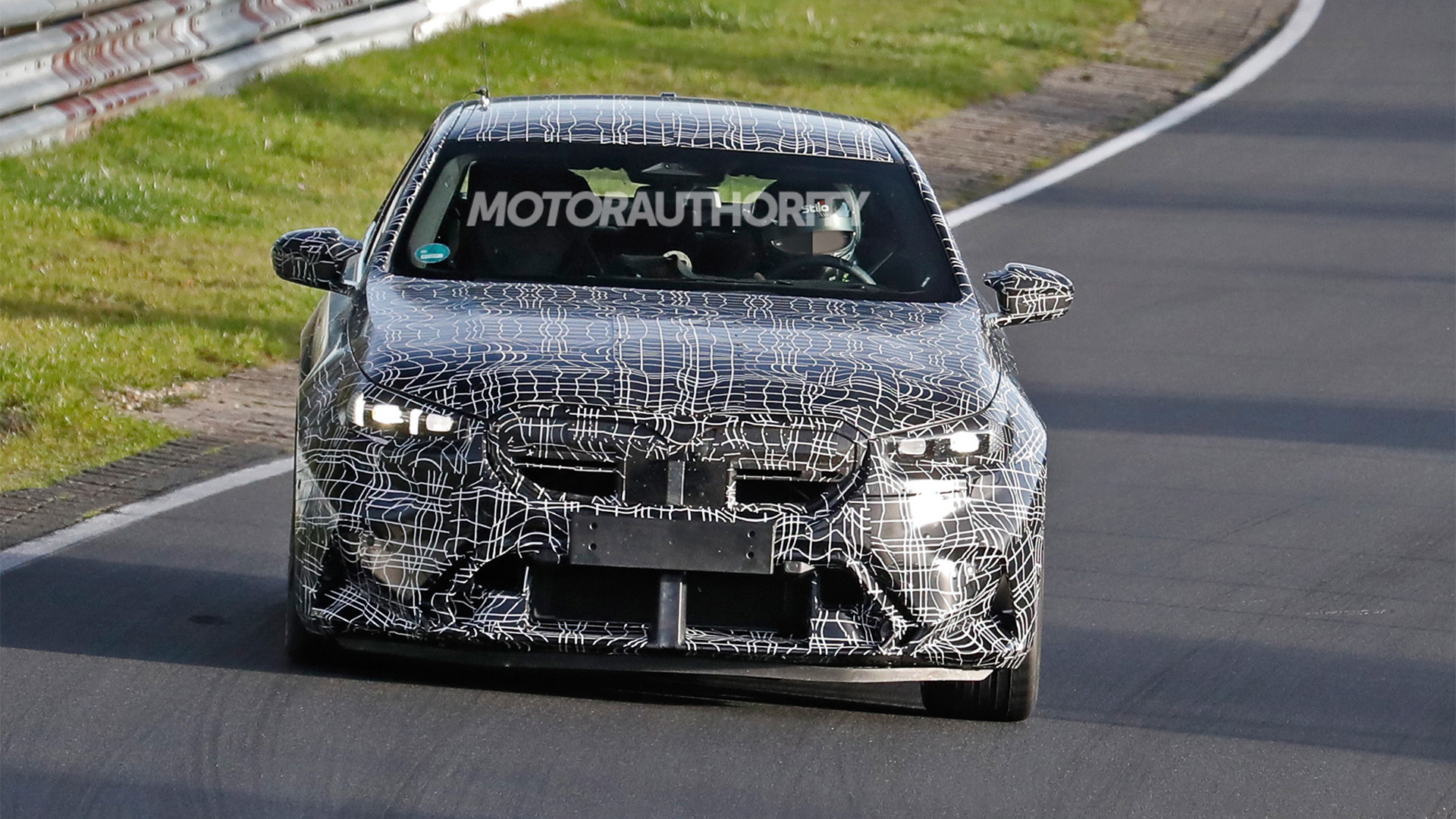 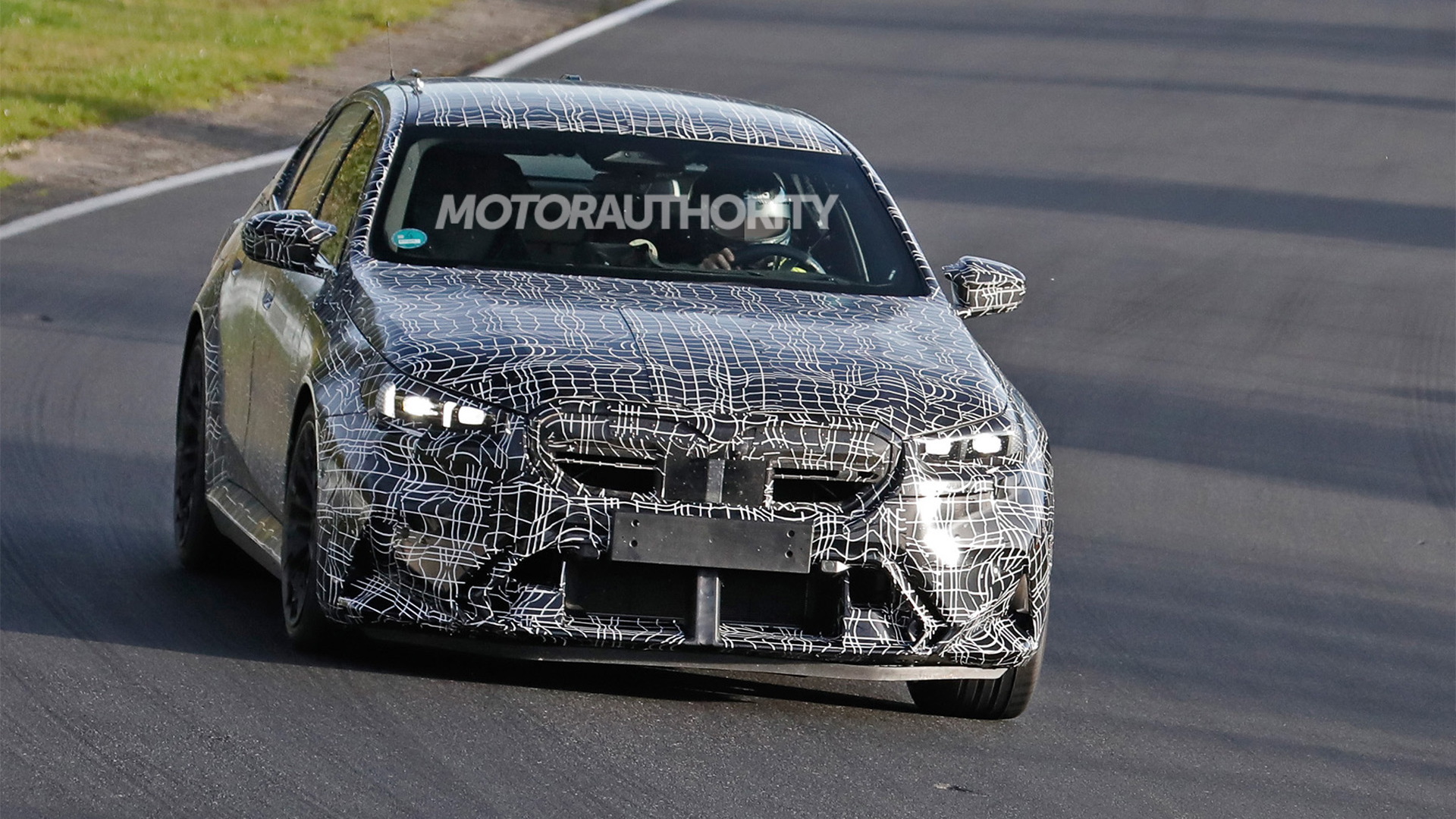 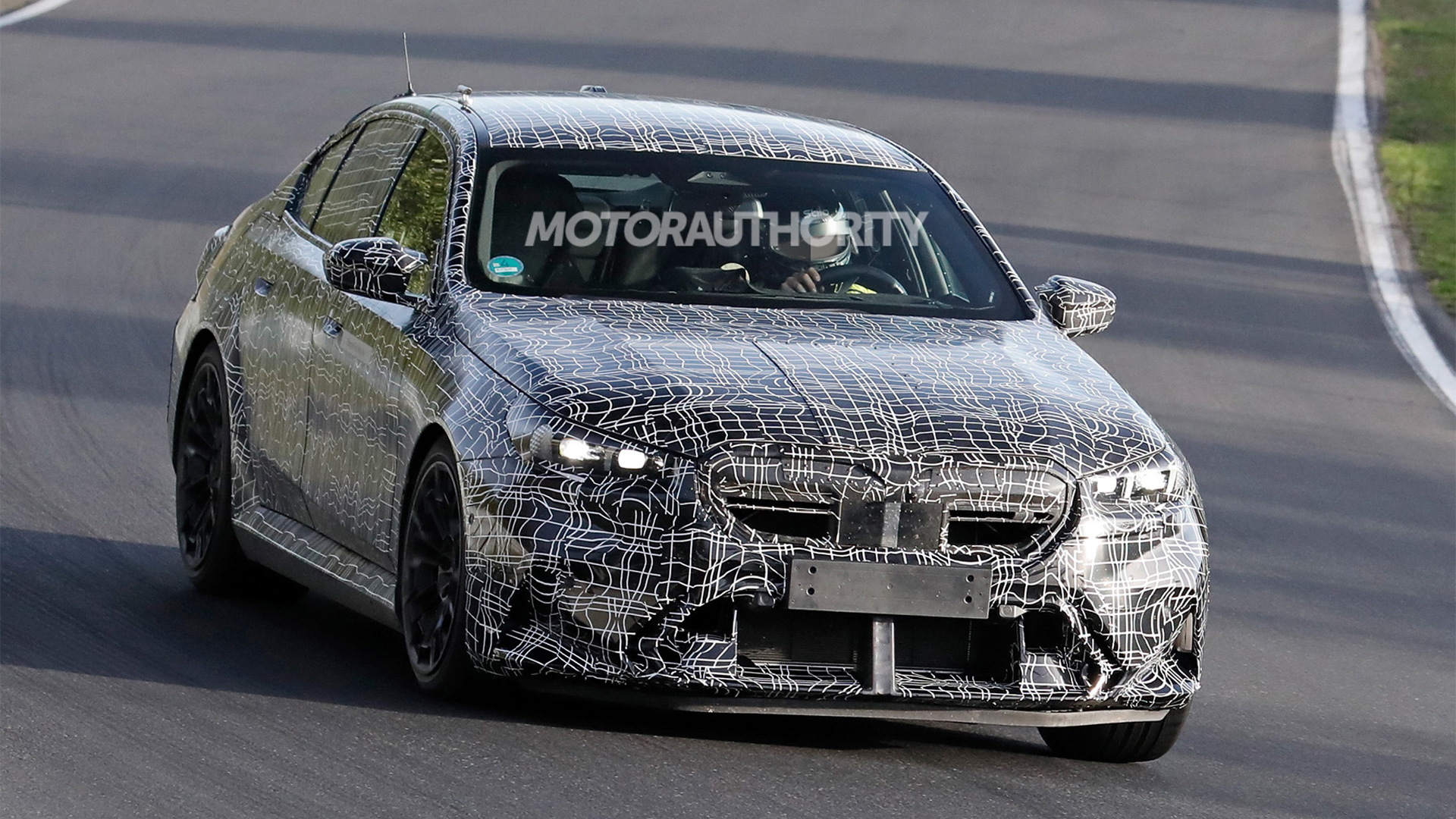 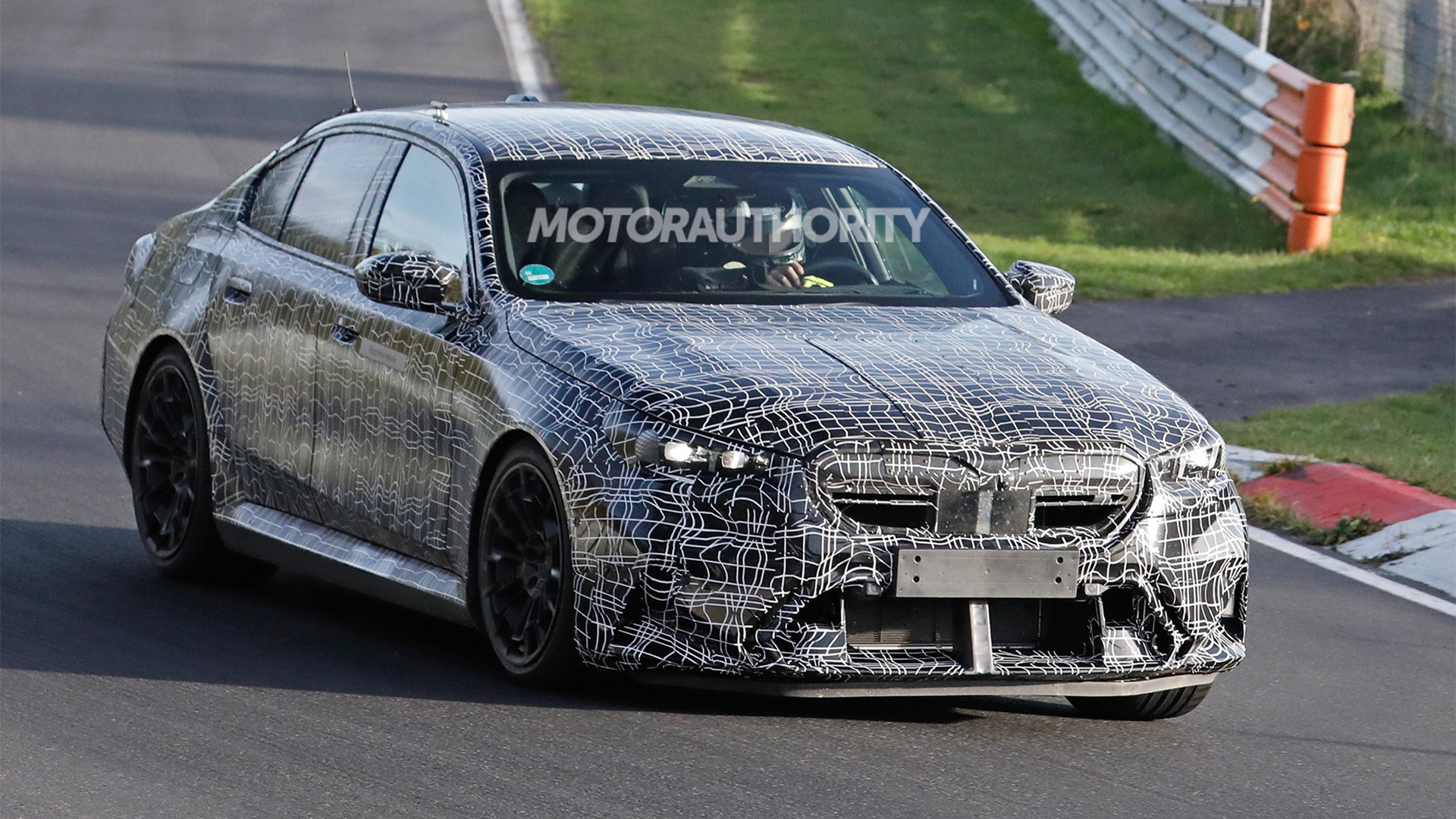 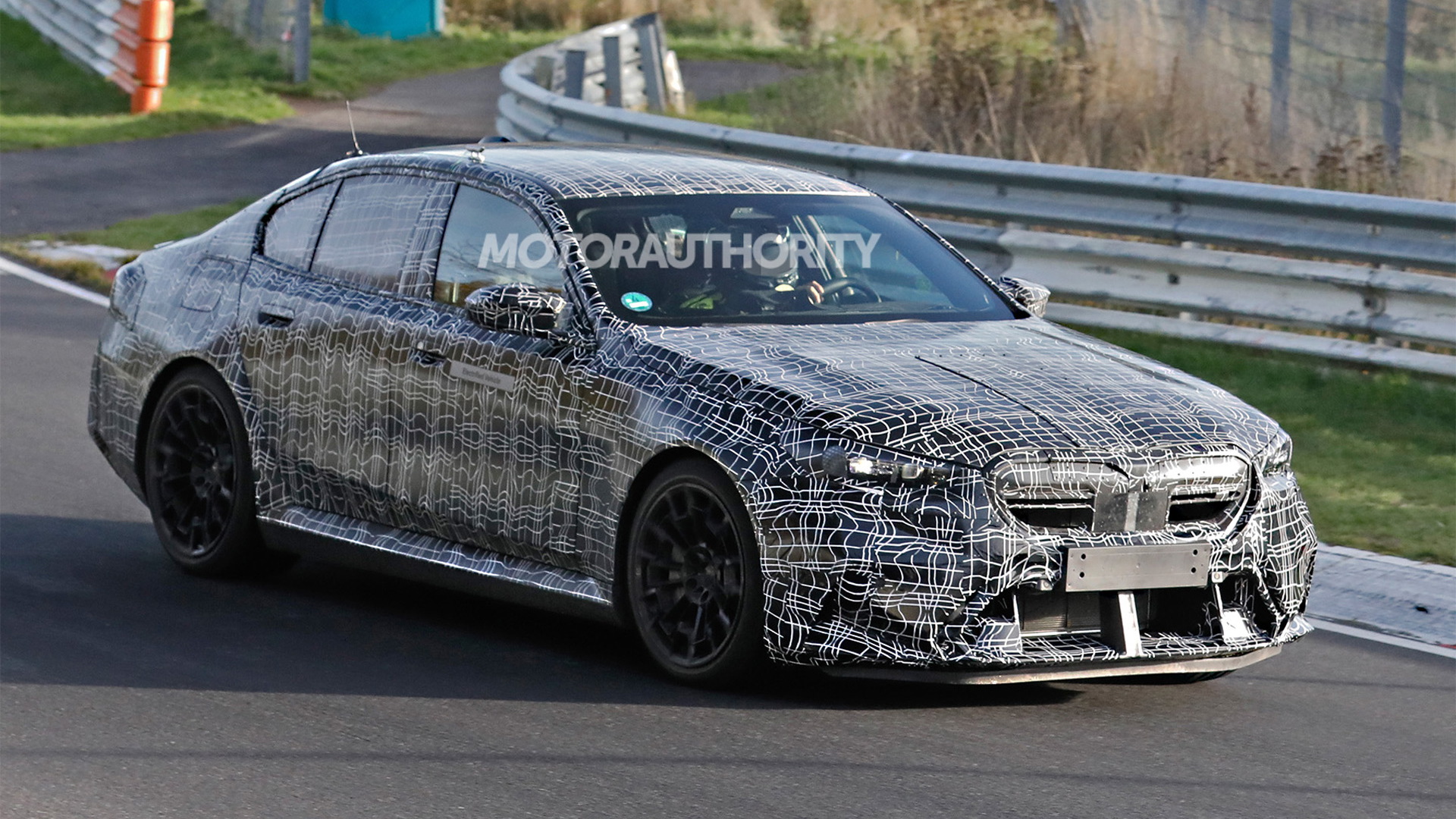 BMW has been spotted testing a prototype for its redesigned M5, which is set to be the first in the nameplate's history to feature electrification.

It's expected to start sales in 2024, or about a year later than the redesigned 5-Series on which it's based. This points to it arriving as a 2025 model.

The prototype may look like one of the testers for the redesigned 5-Series, but there are telltale clues that point to it as the M5 variant. These include the quad-exhaust tips, widened wheel arches, pizza tray-size brake rotors, and multiple intakes in the front fascia.

Interestingly, there appears to be a dip in the hood leading back from the center of the grille, a design first seen on the M3 and M4, and more recently on the 2023 XM. The spider web-like wheel pattern is also similar to the one on the M3 and M4.

A shot of the interior reveals a thick-rimmed steering wheel and floating screens for the instrument cluster and infotainment system, the latter first seen in the iX and slowly making its way into more BMWs.

There's also no missing the “Electrified Vehicle” stickers that confirm an electrified powertrain. A likely bet is the electrified V-8 powertrain that debuted in the XM. A video of a prototype reveals the signature growl of a V-8.

The XM's powertrain is a plug-in hybrid setup that combines BMW's latest twin-turbo 4.4-liter V-8 with an electric motor integrated with the transmission, in this case an 8-speed automatic. The combo is good for 735 hp in a planned XM Red Label model, and this could be what will go in the M5. The current M5 tops out with 627 hp in CS guise. With the plug-in hybrid setup, a modest electric driving range should also be possible. The XM gets 30 miles.

We've heard the redesigned M5 will also be the first in the nameplate's history with the choice of a second powertrain, specifically a battery-electric setup. This powertrain is reportedly coming with a three-motor system good for more than 1,000 hp, which should help the M5 keep up with electric super sedans like the Tesla Model S Plaid and Lucid Air Sapphire. Should an electric M5 be launched, it isn't clear whether it will arrive alongside the hybrid or at a later date. An electric version of the redesigned 5-Series is confirmed to be coming. It will be called an i5, and prototypes are already out testing.