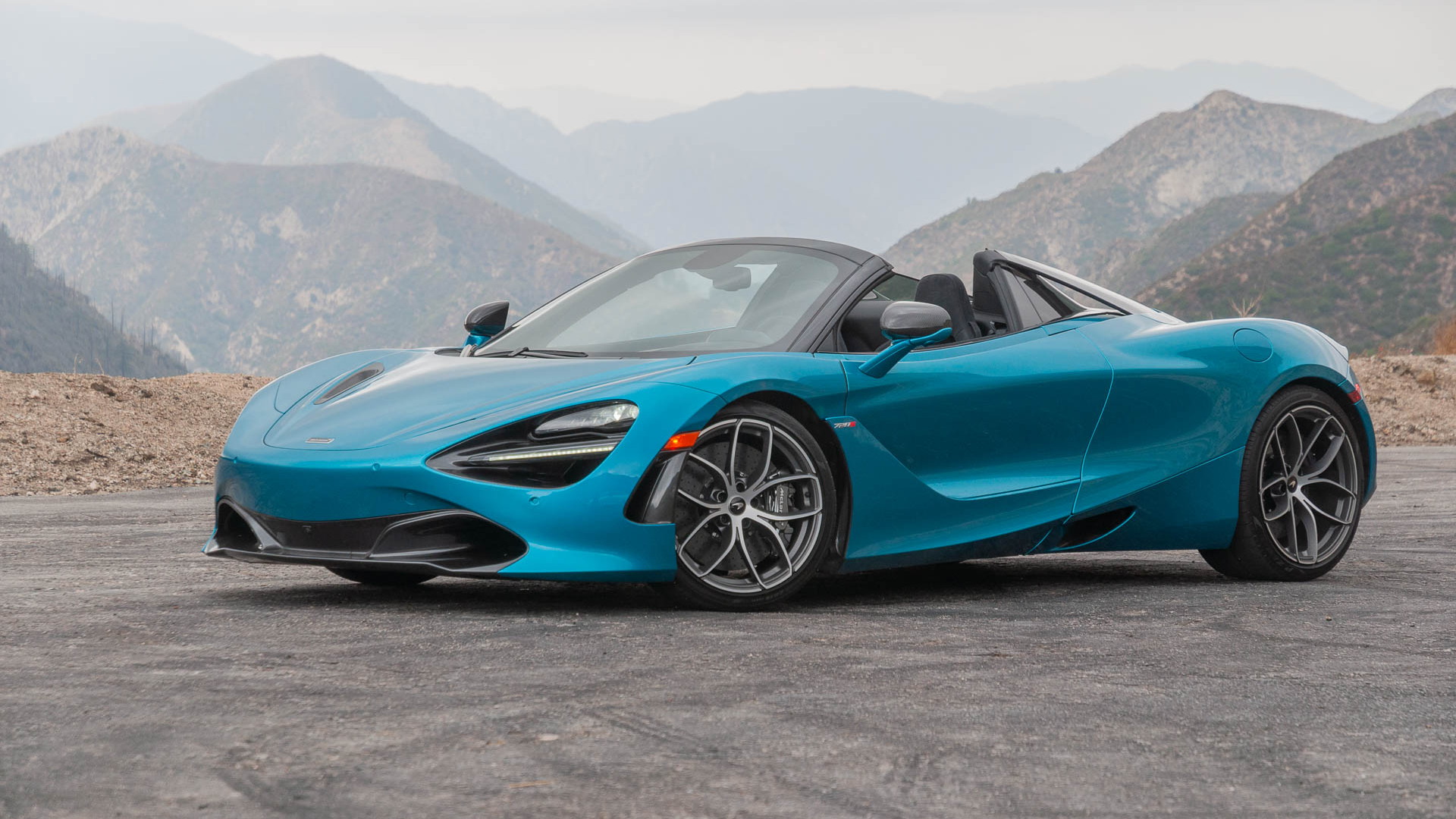 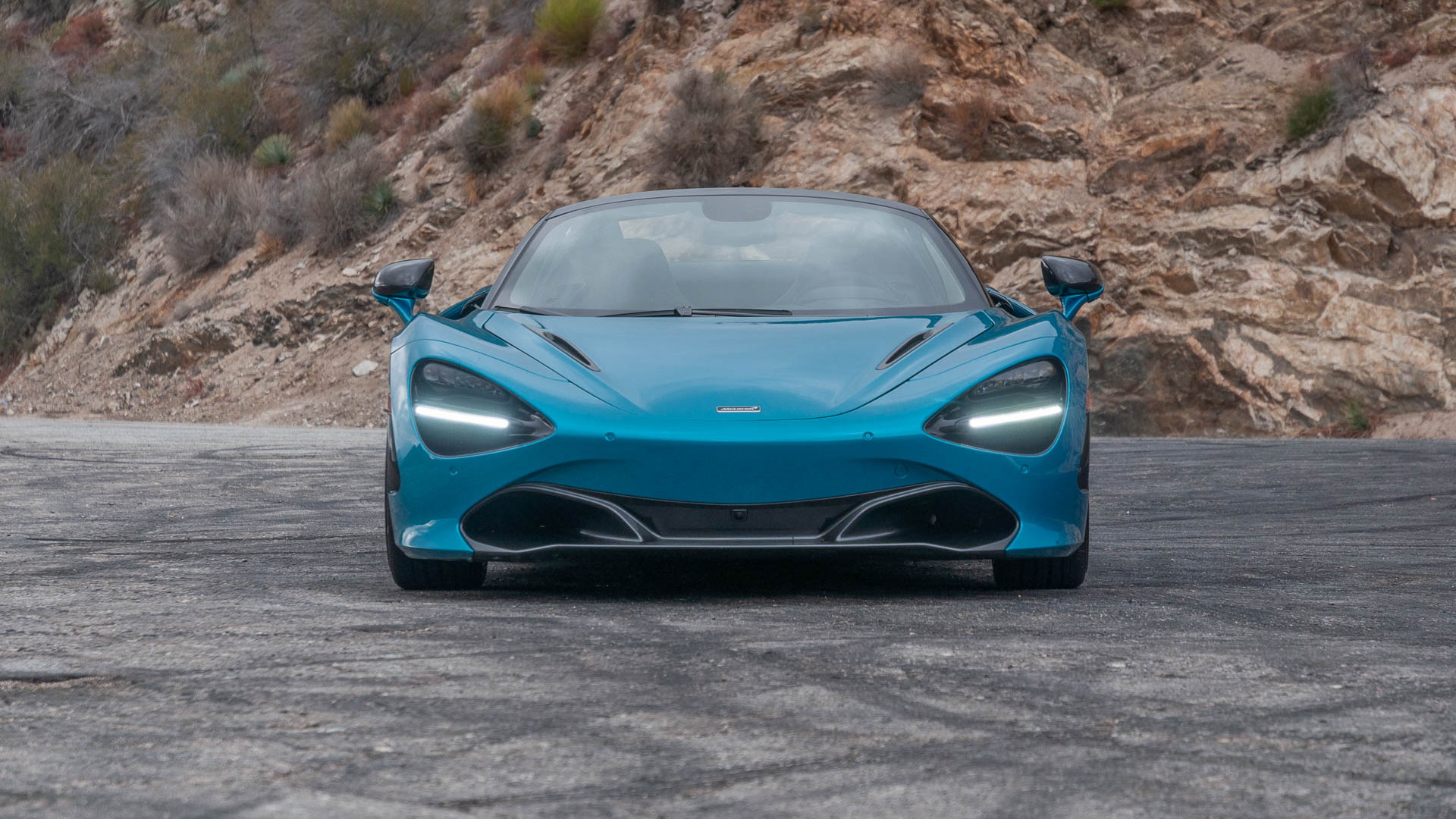 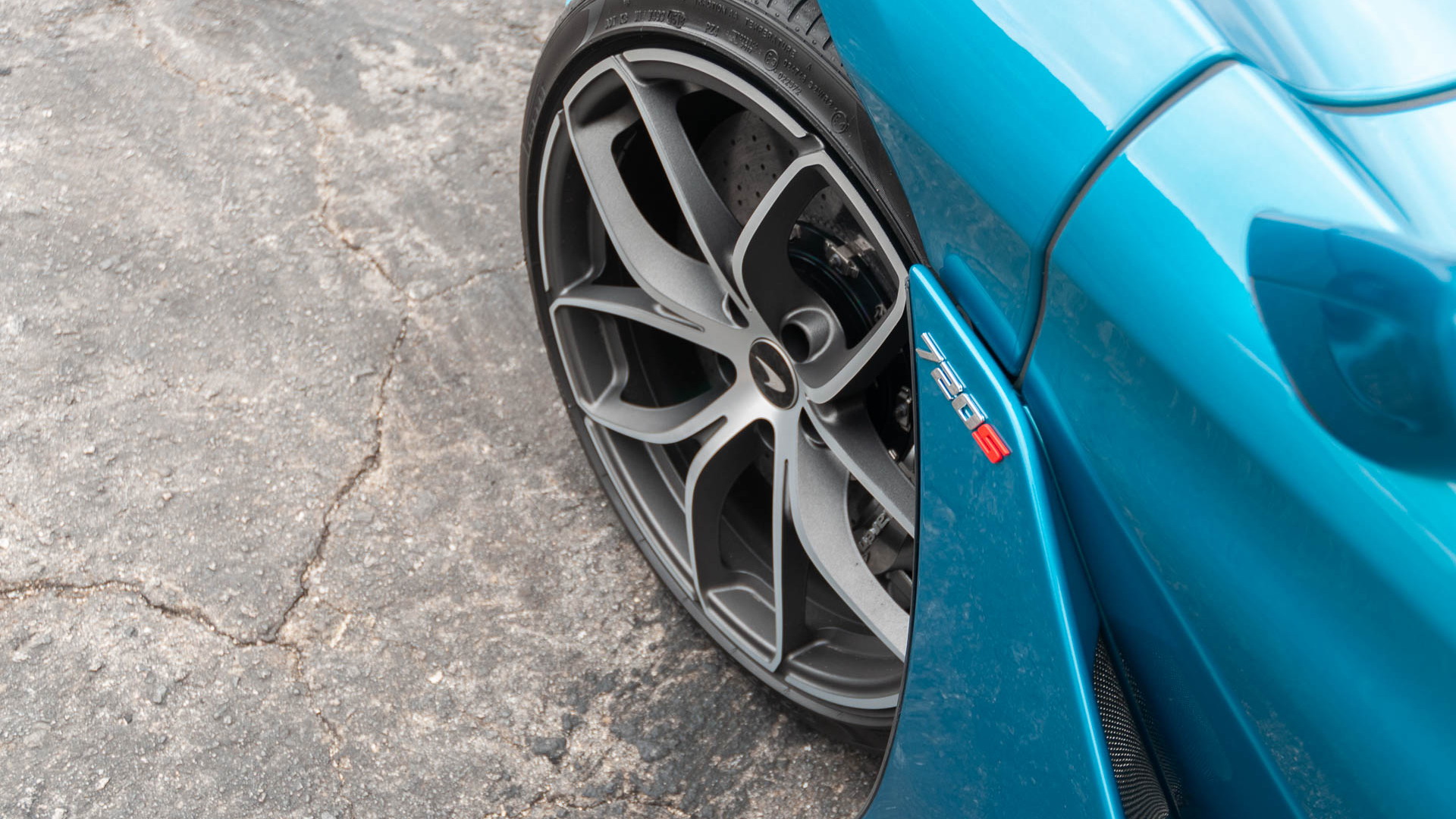 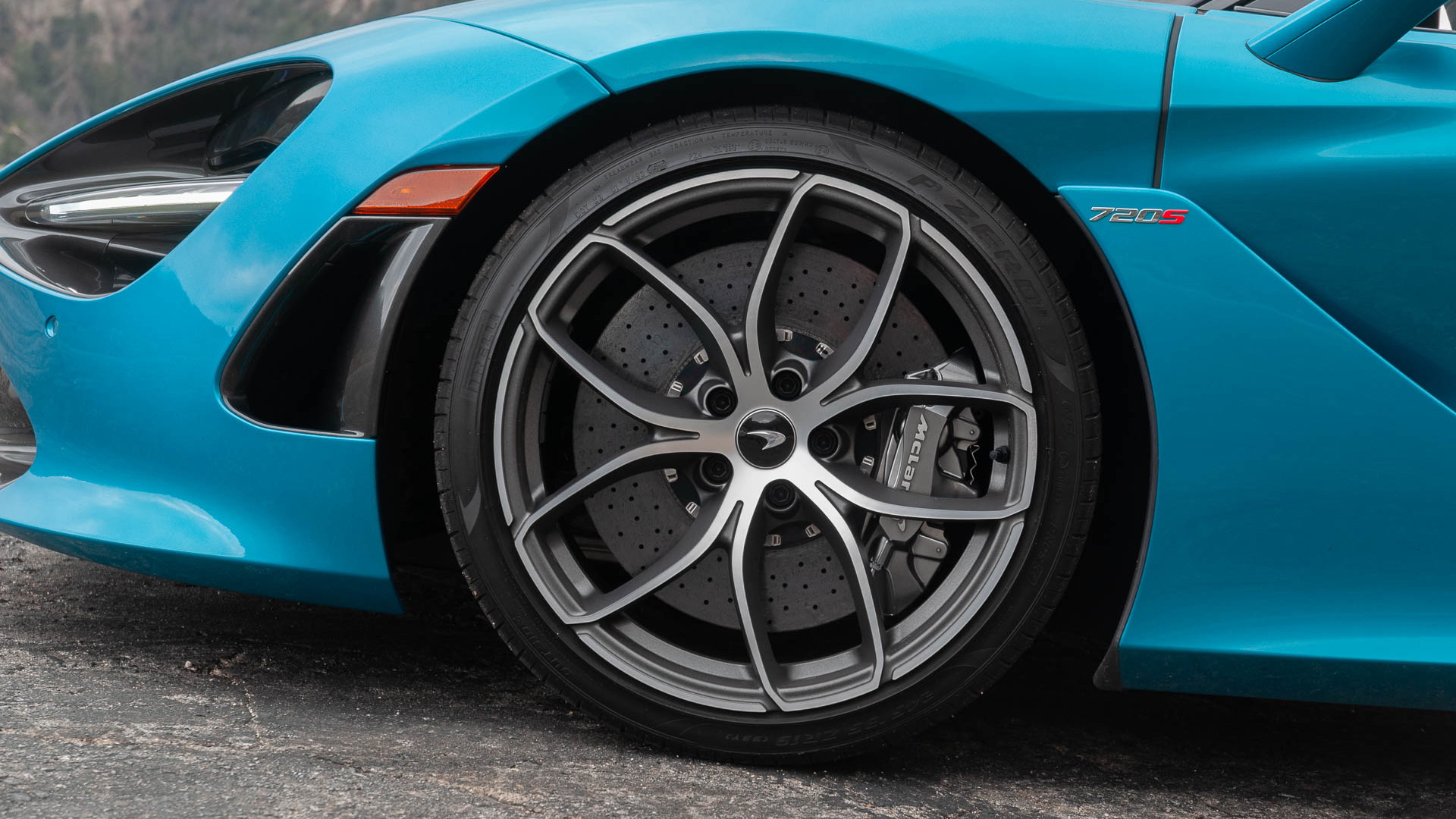 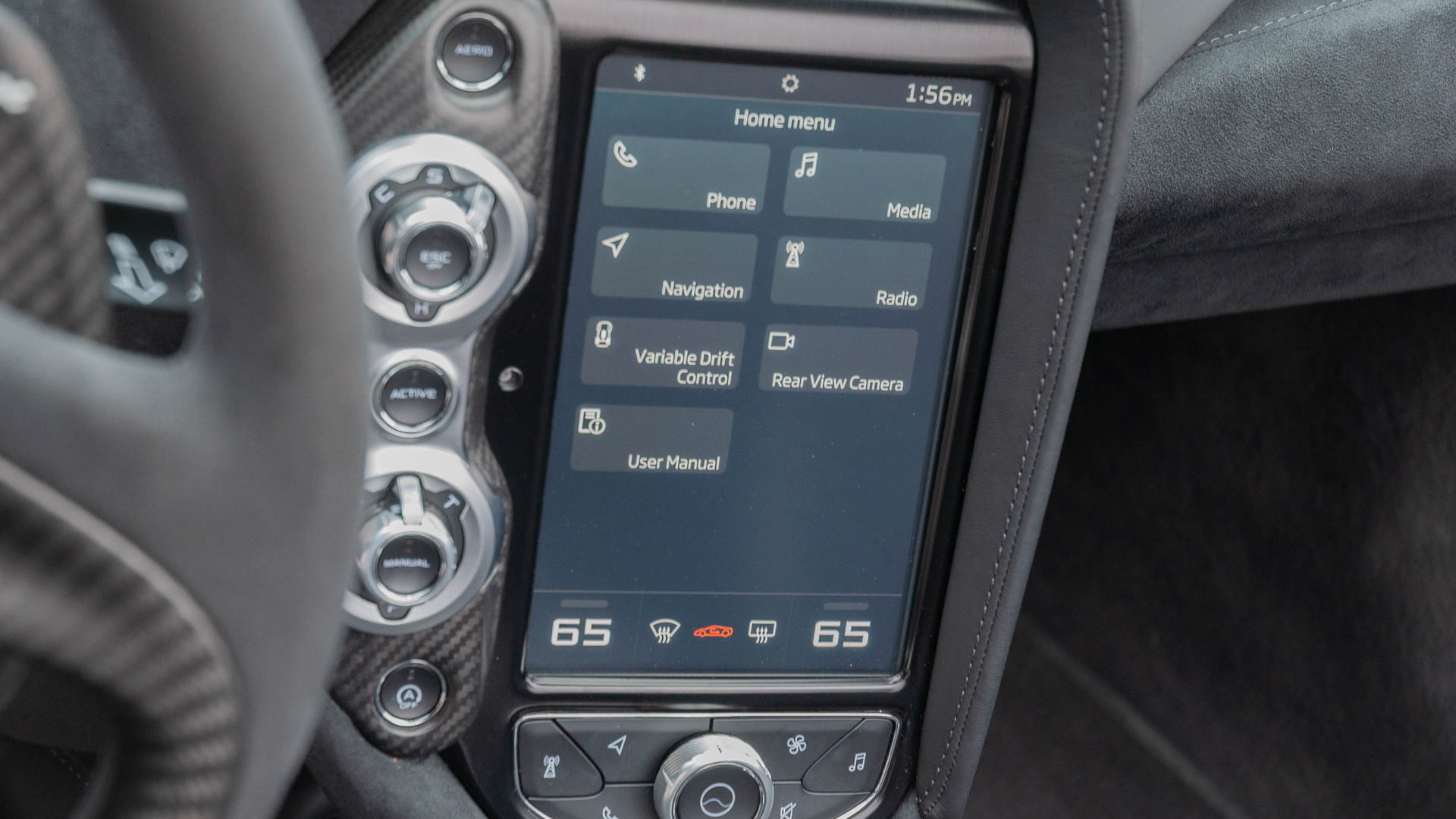 The mission, which I have gladly accepted, is to spend three days in the 2020 McLaren 720S Spider in sunny Southern California. I’m limited to 350 miles, but my time in the car will include a trip out to the desert to visit Hyundai’s Proving Ground and a spirited run or two up Angeles Crest Highway, which is one of the best canyon roads in the country.

The Belize Blue paint job ($5,270) is just one-tenth of all the options packed into this everyday supercar, and the options list alone costs about the same as a very good sport sedan: $55,490 to be exact. The 720S Performance specification accounts for $12,130 alone; it adds a host of carbon-fiber parts inside and out, Dark Palladium exterior trim, engine bay ambient lighting, and an Alcantara and Nappa leather interior. Other notable options include an electrochromic roof ($9,100) that tints darker to block out the sun, a $5,490 performance exhaust, and a Bowers & Wilkins 12-speaker audio system ($4,420).

We’ve already reviewed the 720S Spider, and found it to be a fantastic balance of performance and comfort. That was at a manufacturer-run driving program under controlled conditions. How will it perform over three unscripted days on city streets, mountain roads, and desert highways? This supercar needs some supervision. Here’s what I learned after three days behind the wheel. 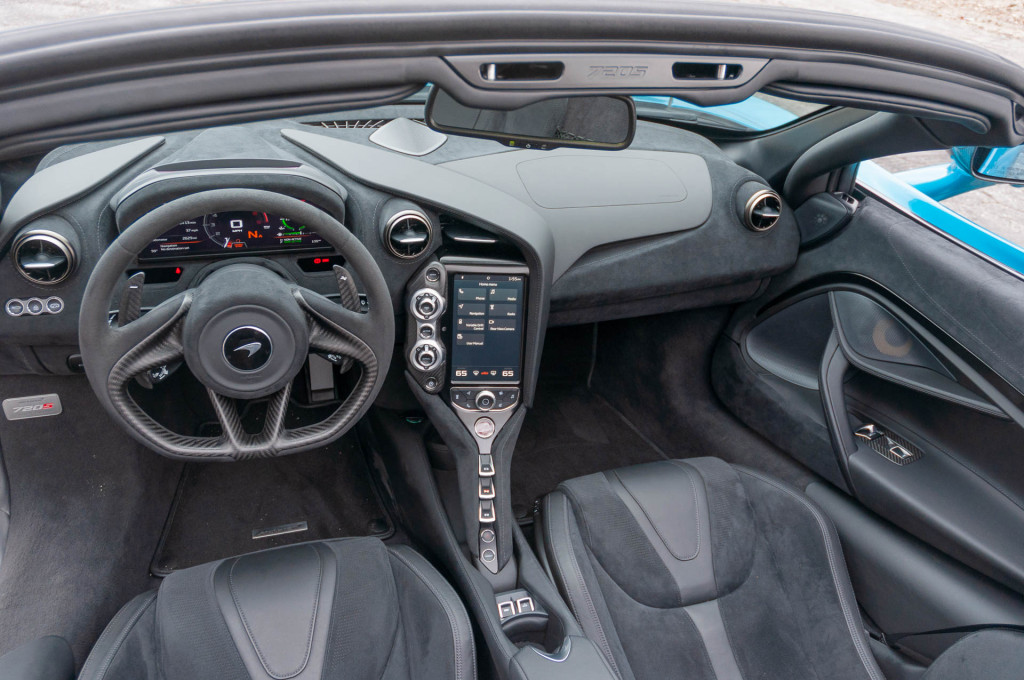 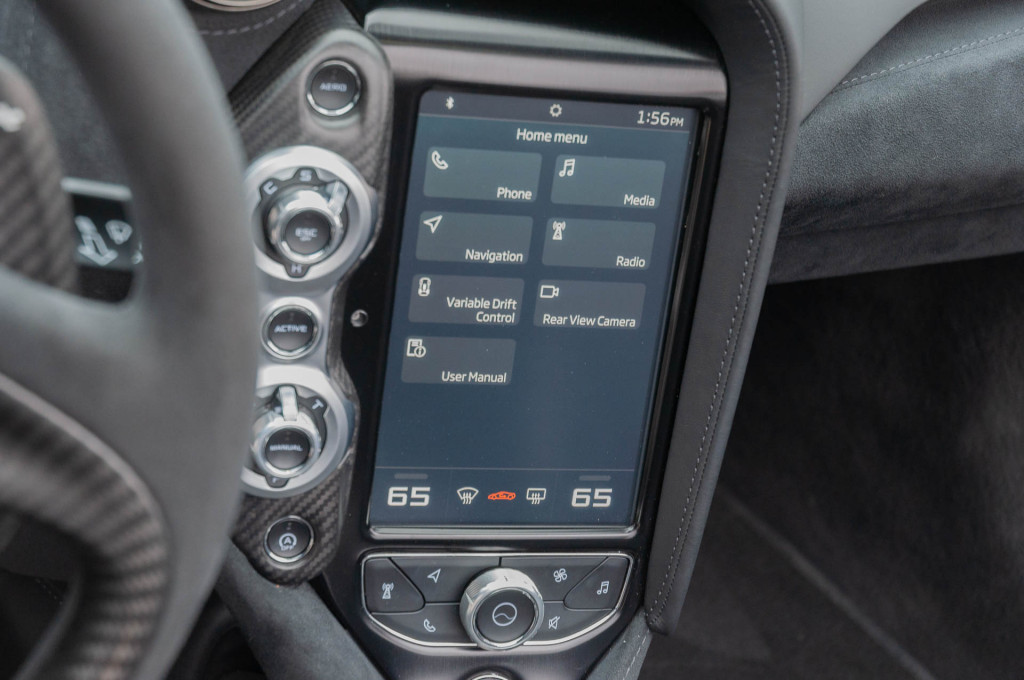 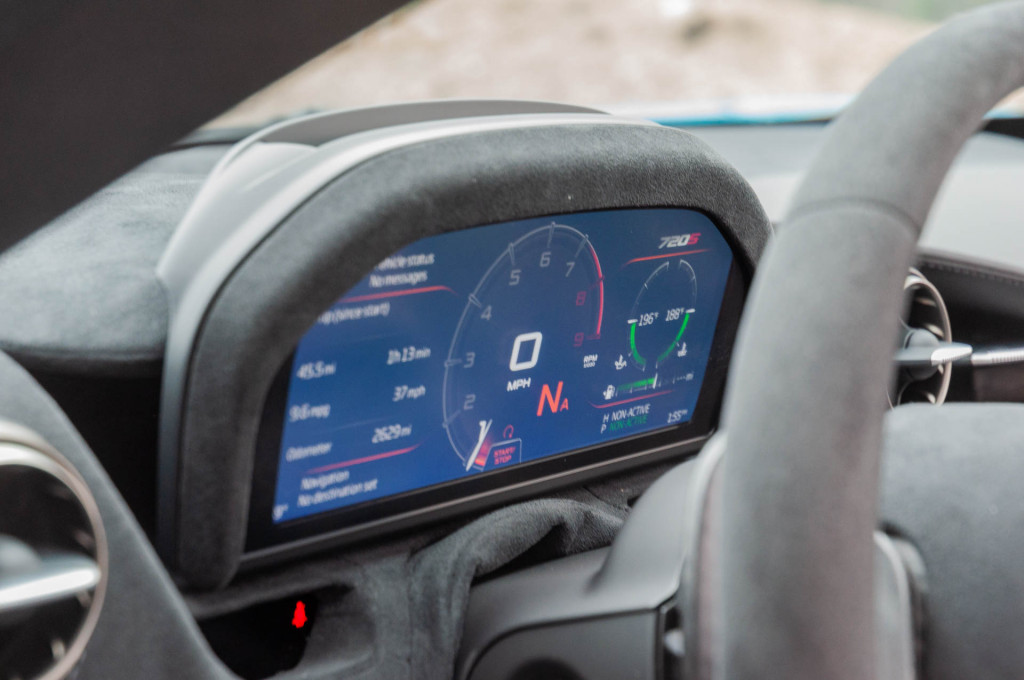 The 720S’s cabin is unlike that of any other manufacturer. It requires a deep bend to get through the scissor-style doors and a tutorial to learn what the various switches and dials do. I never do figure out how to change the positions of the outside mirrors, and it took me one driveway too long to figure out how to activate the front lift system, which requires pushing a button on a stalk to the right of the steering wheel and flipping it up.

The McLaren’s steering wheel is diametrically opposed to what you get in a Ferrari. It has no buttons at all; it just handles the steering. Ferrari, meanwhile, takes a race car approach and puts every dynamic control in front of the driver on the steering wheel.

The 720S’s digital instrument panel is easy enough to read, and it retracts in Track mode to give only the barest of information. The modes for the powertrain and suspension are handled by a pair of dials between the steering wheel and the vertically oriented infotainment screen. The top dial, for the suspension, has a button in its center to adjust the modes of the stability control system. The button in the center of the powertrain’s dial puts the transmission in manual mode.

Can anyone tell me how to adjust the mirrors? 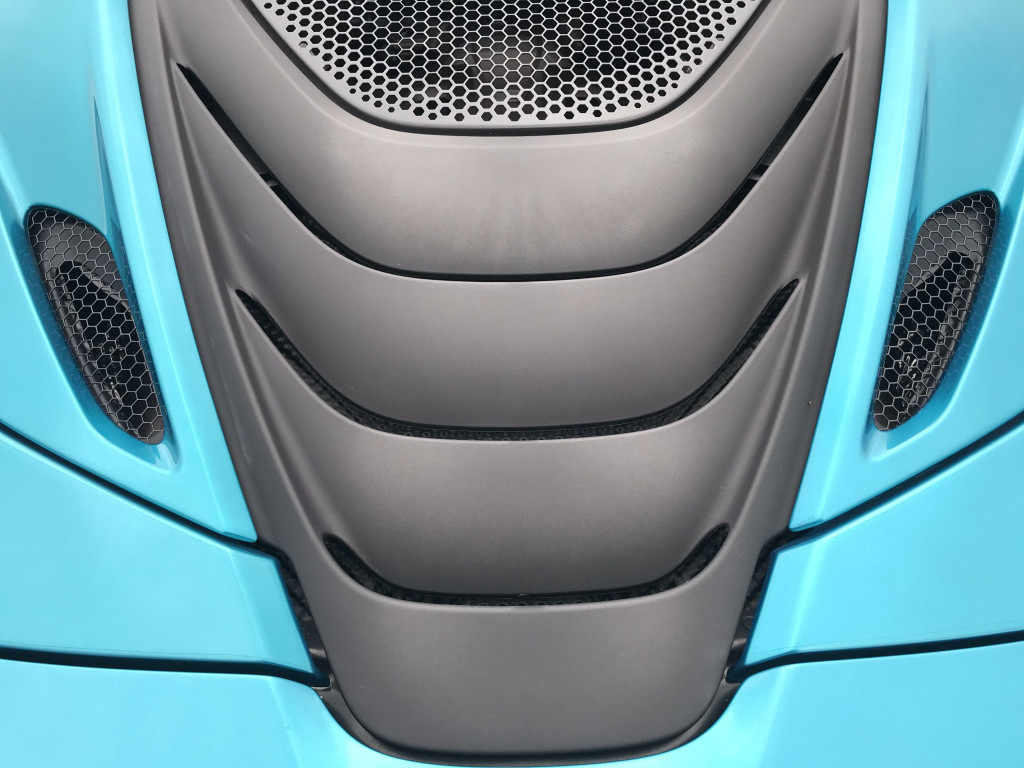 The twin-turbo V-8 is docile…until it isn’t

McLaren packs the 720S with 4.0 liters of British V-8 excitement. A couple of big turbochargers help the engine create 710 horsepower at 7,500 rpm and 510 pound-feet of torque from 5,500 to 6,500 rpm. The turbos do little at low speeds and during the first few millimeters of throttle travel. This makes it easy to drive the 720S around town, and requires a deep stab of the go pedal to access the power.

Once the pedal is pinned, though, the 720S becomes a thrill ride. After a small pause for the turbos to spool up, the car hurtles forward like it was launched from a trebuchet. It slings my back into the seat, makes me wonder if my life insurance premiums are paid up, hits 60 mph from a dead stop in 2.8 seconds, and covers the quarter mile in 10.4 seconds—all while sounding a deep thrum that sounds good but not Ferrari good.

The 7-speed dual-clutch transmission plays well with the engine in the powertrain’s available Comfort, Sport, and Track modes. The engine and transmission snap to attention in Track mode and take a more casual approach in Comfort. A pair of large, carbon-fiber shift paddles by way of McLaren’s MSO personalization division behind the steering wheel let me control the shift points, but the transmission likely does it better in most any situation. 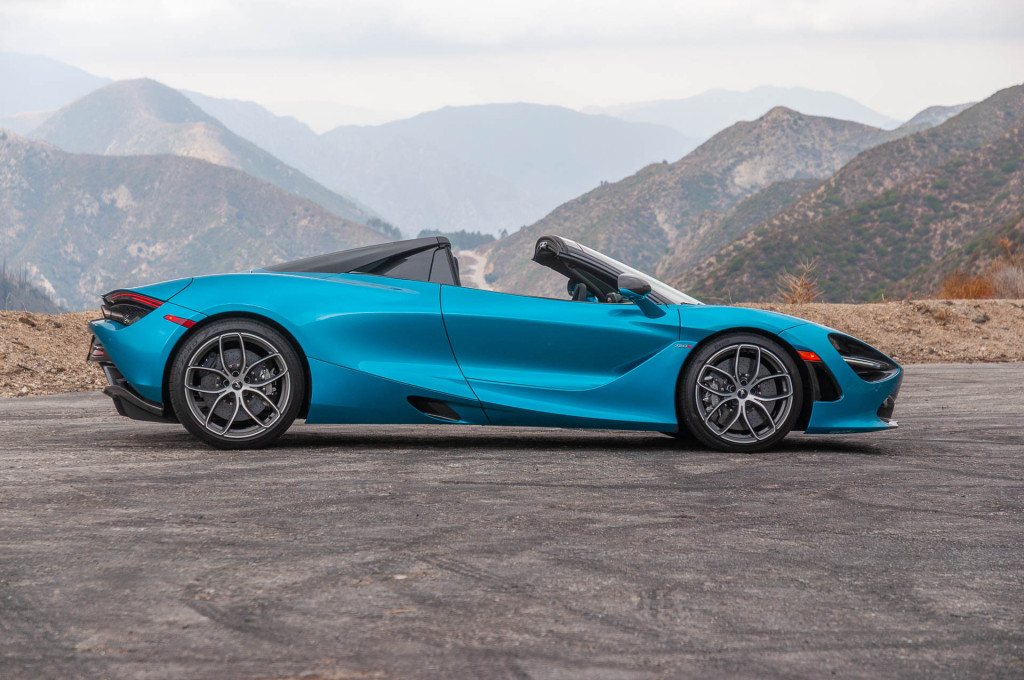 The retractable top only adds to the experience

McLaren bases the 720S Spider on the same MonoCage II carbon-fiber tub as used for the coupe but with a few modifications. The strong tub provides most of the rigidity for both cars.  On the Spider, the carbon-fiber retractable top isn’t part of the structure, but the tub is so rigid the Spider needs no additional strengthening measures. The top mechanism adds 130 pounds, but the car wears it well. That means the Spider offers the fun and freedom of open-top driving while giving up little performance.

The top opens or closes at the push of a button in 11 seconds at speeds up to 31 mph. When the temperature dips below 60 degrees as I approach Angeles Crest, I’m able to raise it at a stoplight with time to spare.

The open top not only brings nature closer, but it also lets in more of the engine note. Specifically, the whistle of the turbochargers’ blow-off valves becomes apparent, a sound that fades into the background with the top up and the windows closed. 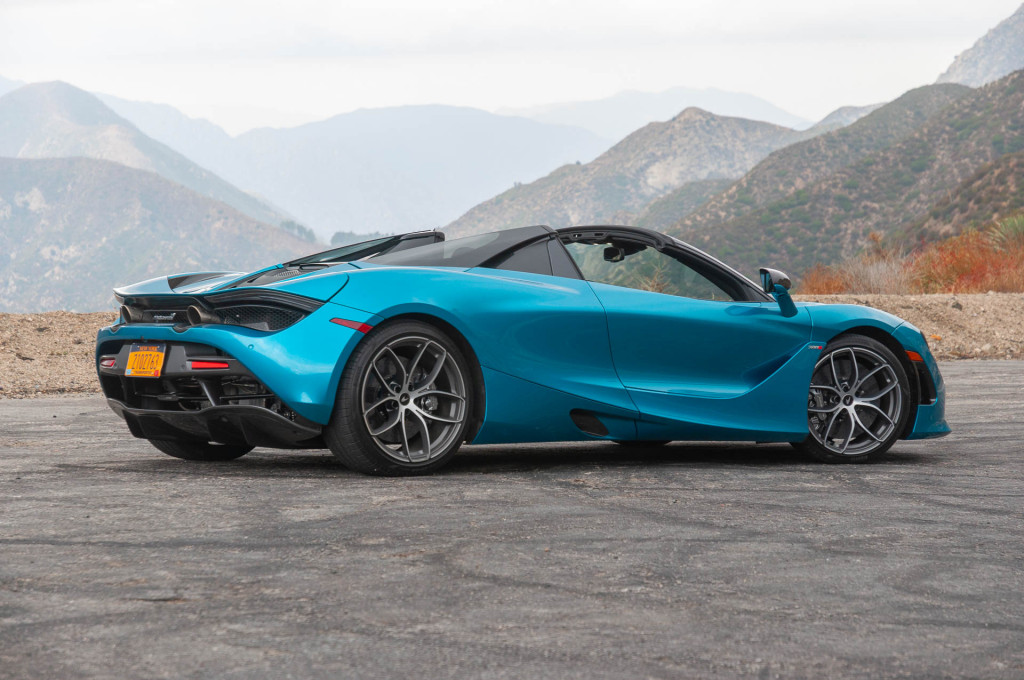 McLaren outfits the 720S Spider with an active rear spoiler that automatically raises to improve downforce and lowers for less drag. On the twisty canyon roads of Angeles Crest Highway, cars behind disappear because the raised active rear spoiler blocks the already compromised view astern. The view out the front and sides, however, is as good or better than any car on the market thanks to thin pillars and a cab-forward seating position that provides a great eyeline down the car’s nose.

Cars chasing the 720S Spider also disappear because the car is so damn fast. The McLaren sits as low as any car you’ll ever drive, and its staggered Pirelli P Zero tires (245/35R19 up front and 305/30R20 in the rear) clamp down on the pavement with an iron grip. The grip is aided by the Proactive Chassis Control II suspension, which features numerous sensors to constantly monitor the conditions and change the damping of the hydraulically linked dampers for best traction. In Comfort mode, the PCC II suspension also makes the 720S a comfortable daily cruiser. In Sport and Track, it’s incredibly agile with little-to-no body lean in turns, quick responses, and a pleasantly heavy steering feel at speed. 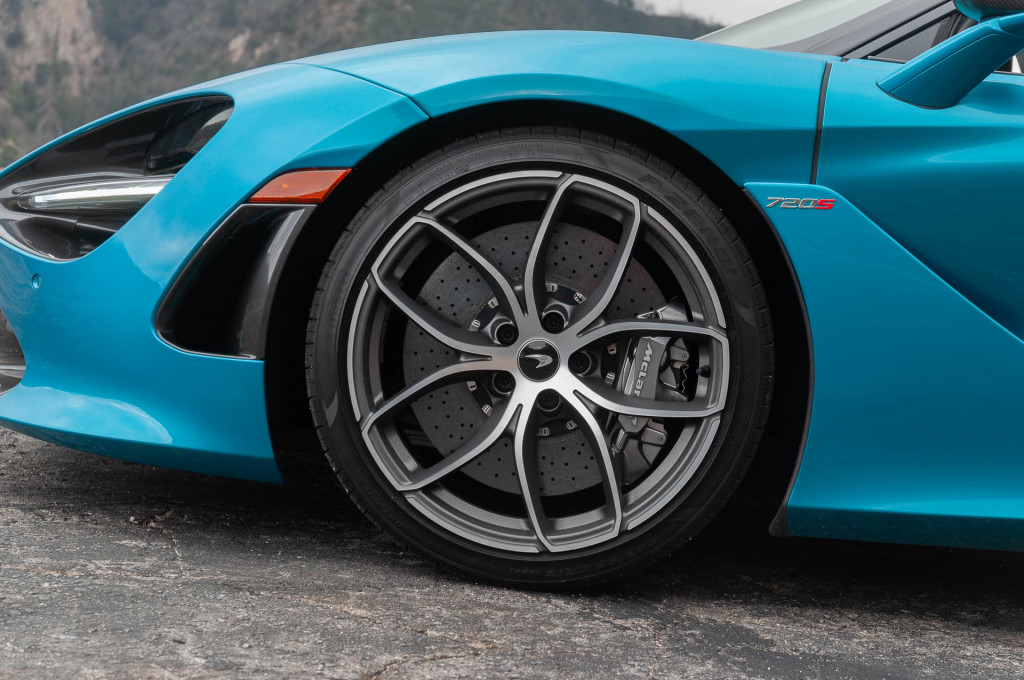 The brakes could use some tuning

A set of massive carbon-ceramic dinner plates provides the stopping power. Their performance can’t be questioned. What can, however, is their feel during that performance. The 720S has a low pedal with a numb feel as the brakes start to engage. It’s mushy most of the way through its travel, then it’s akin to pushing a wood block against a brick. However, the harder I get into it, the more the brakes slow momentum. I’d prefer a higher pedal with a more progressive correlation between pedal travel and stopping power.

While I don’t activate it because the required speed would be highly illegal, the 720S Spider’s active rear spoiler helps with braking by acting as an air brake when the speeds exceed road-legal limits. 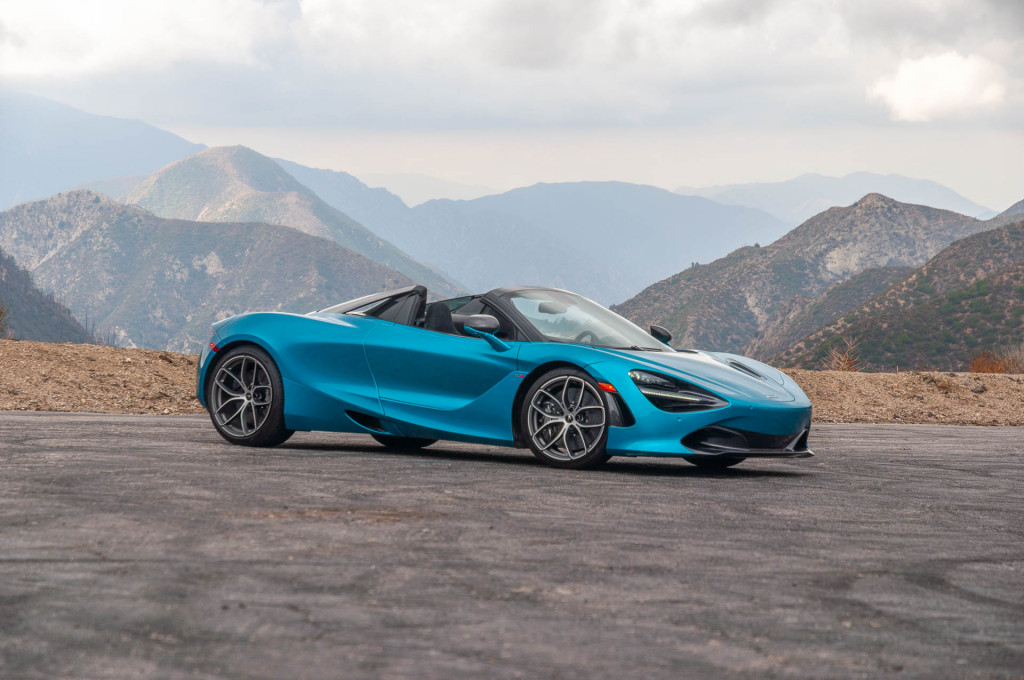 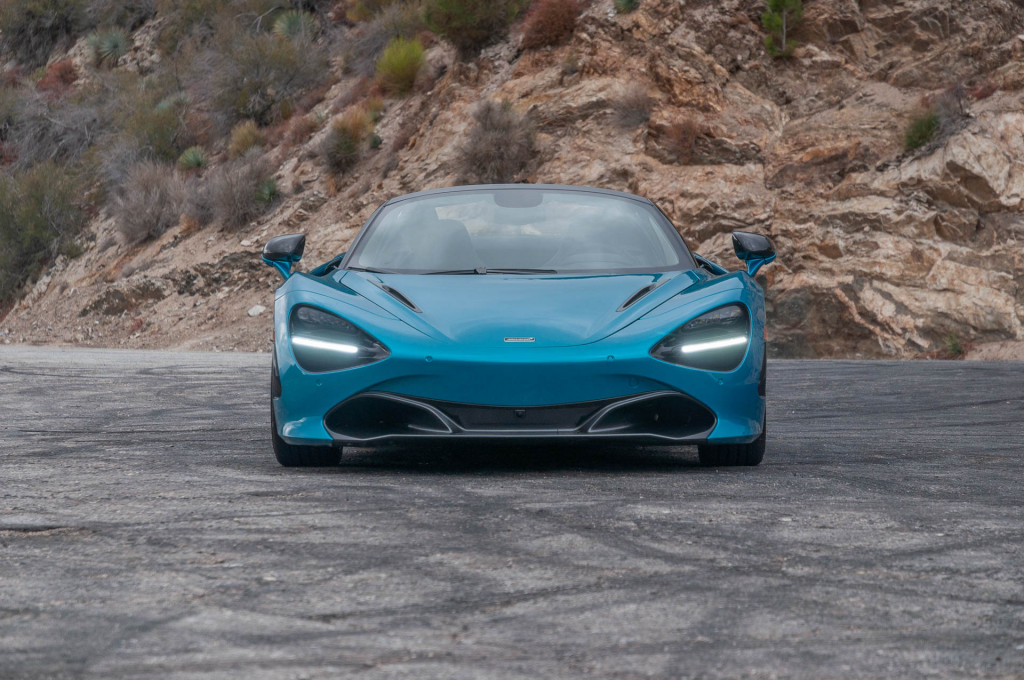 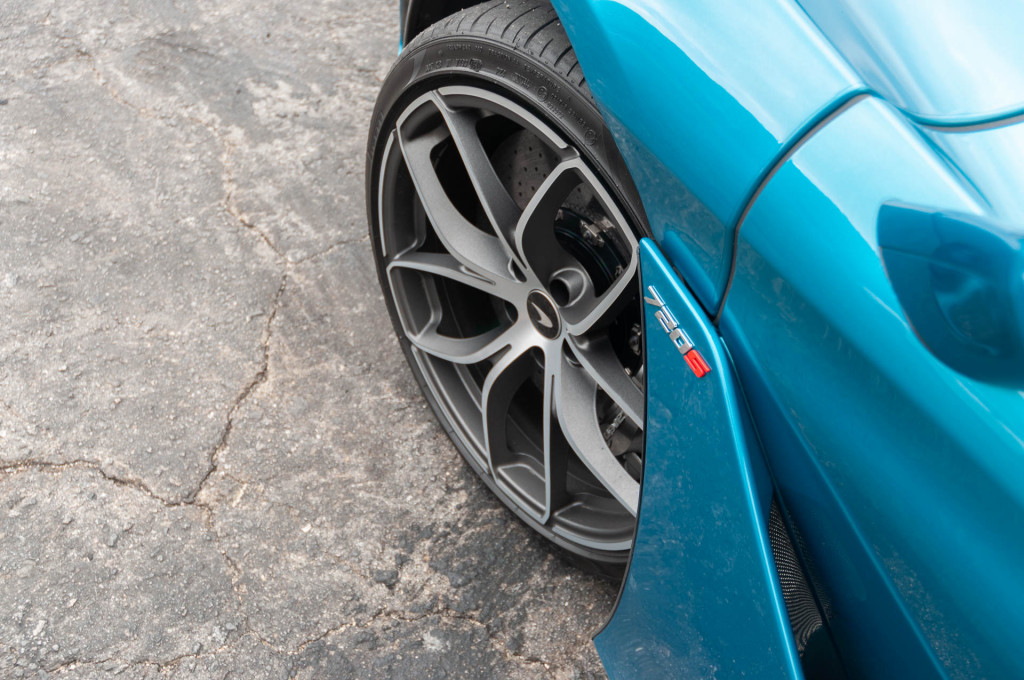 The McLaren 720S Spider draws attention wherever it goes. People ask if they can take selfies with it, tow-headed kids roll down the windows and stare in wonder on the highway, and drivers in the car behind pull out their phones to shoot pictures—which doesn’t exactly inspire confidence that they are paying attention to the road. People want to talk about the car, and I want to pretend it’s really mine, but it simply isn’t.

It’s everything it’s cracked up to be.

The phenomenon of the livable supercar isn’t entirely new, but McLaren has been at the forefront of that revolution for the last decade. The PCC II suspension and the V-8’s otherworldly power elevate the 720S into McLaren’s Super Series of supercars. Both improve the performance without making the 720S Spider unapproachable, fussy, or high strung. In the world of supercars, more is better, and the 720S certainly delivers more. Its interior controls may be wonky and it may not be the most reliable supercar, but this brilliant bit of British engineering rides well, manages to be as constrained as your right foot is, has great sight lines both inside and out, and offers the fun of open-air driving without the usual performance penalty.