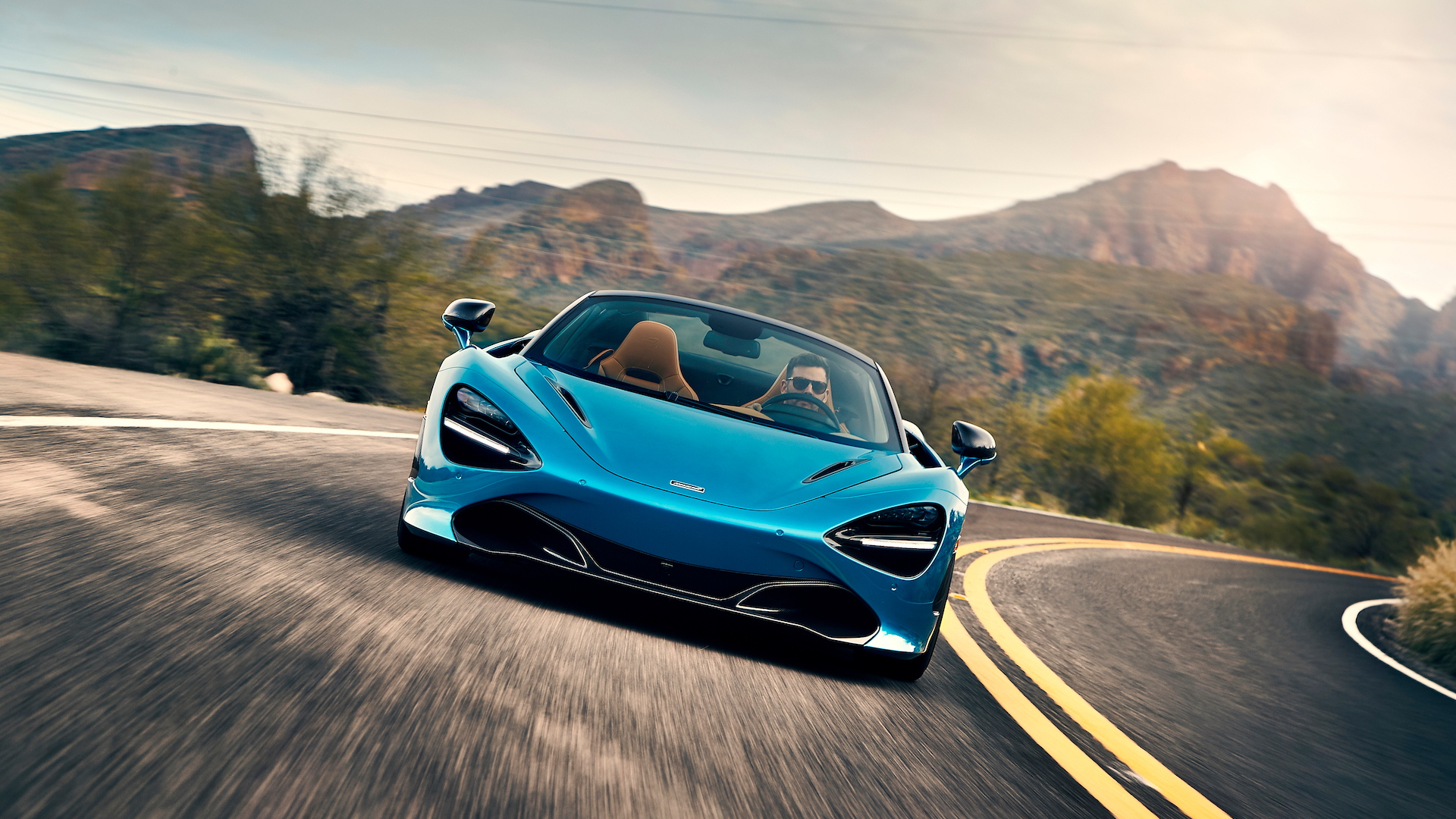 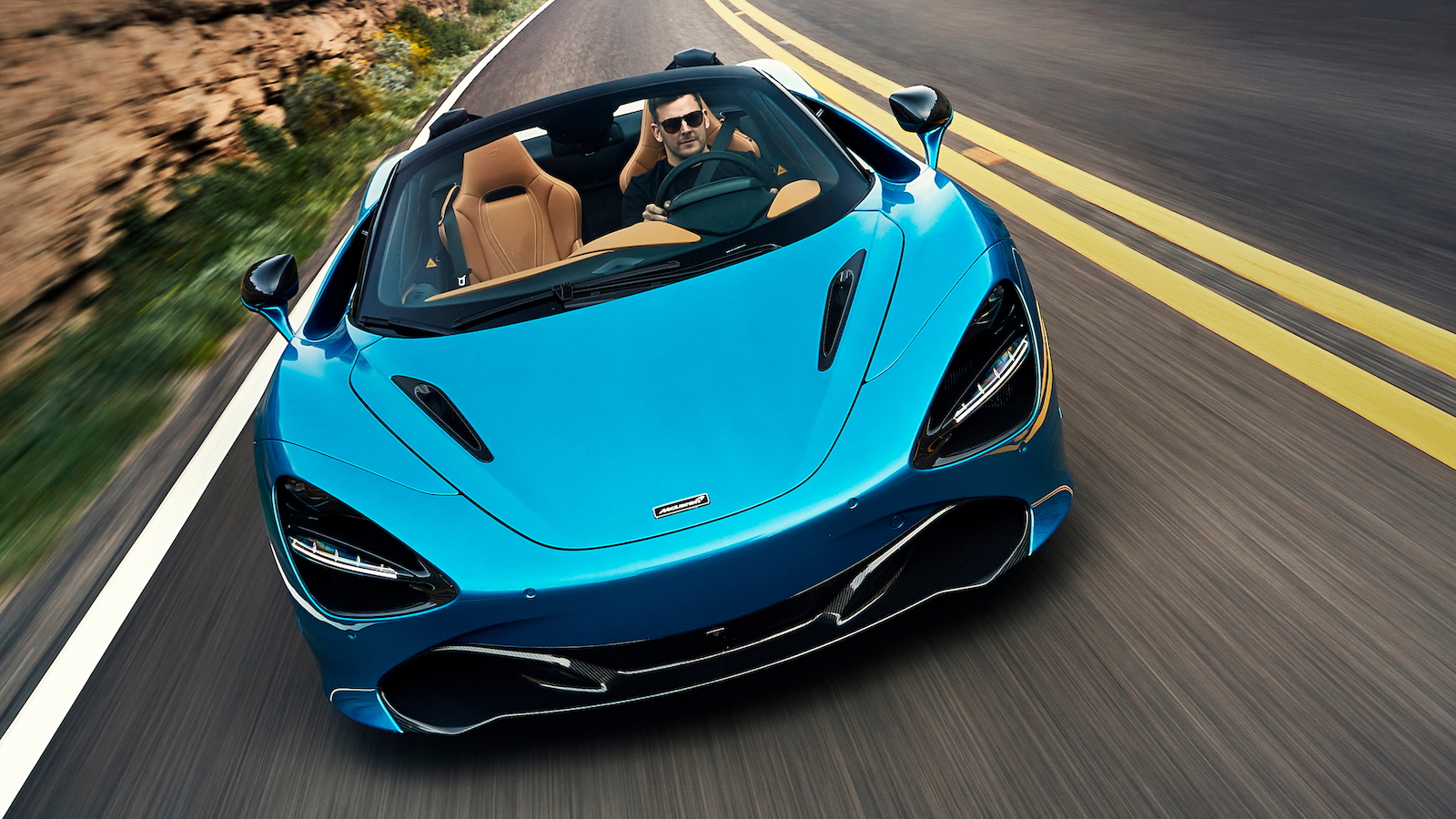 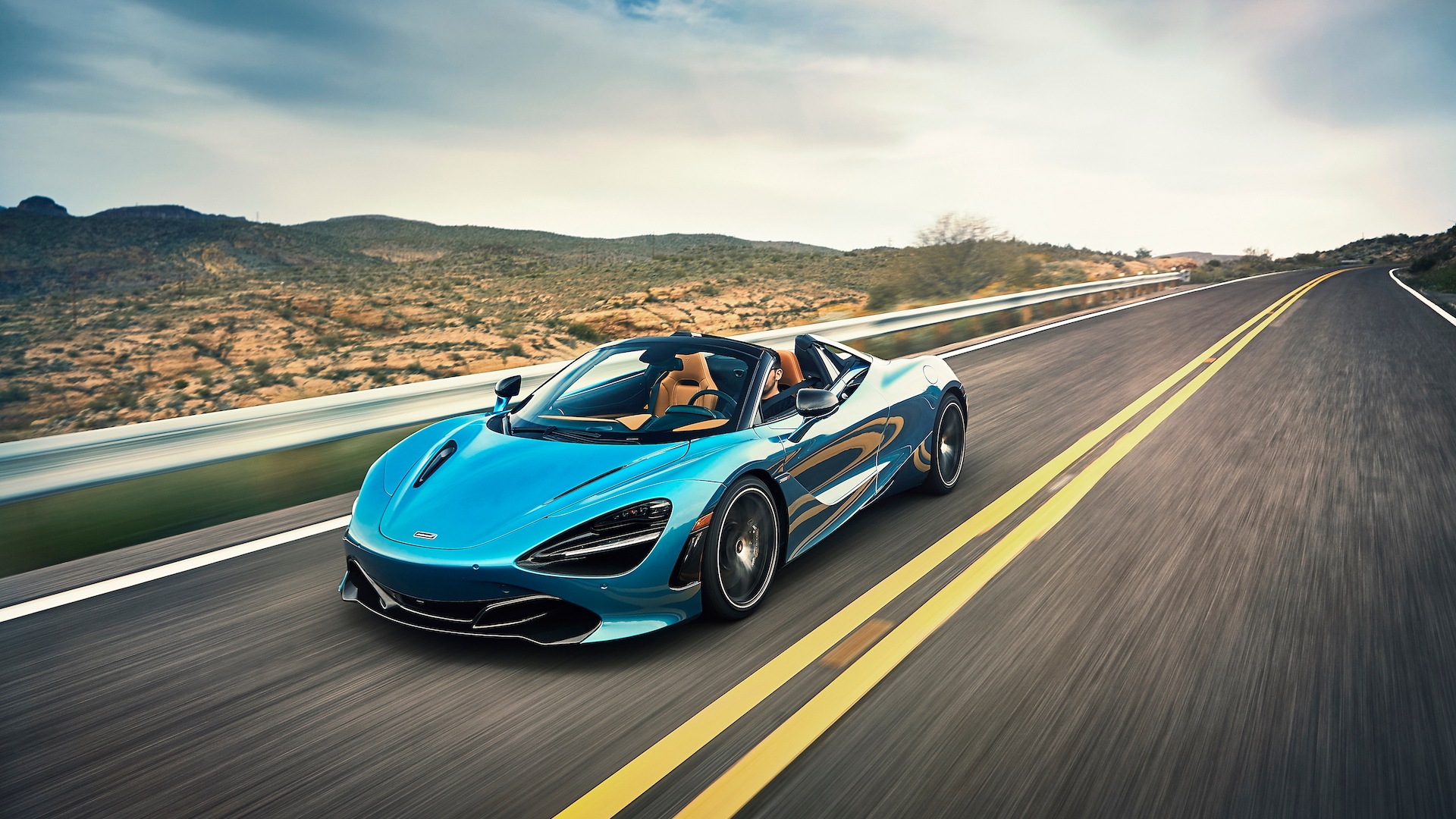 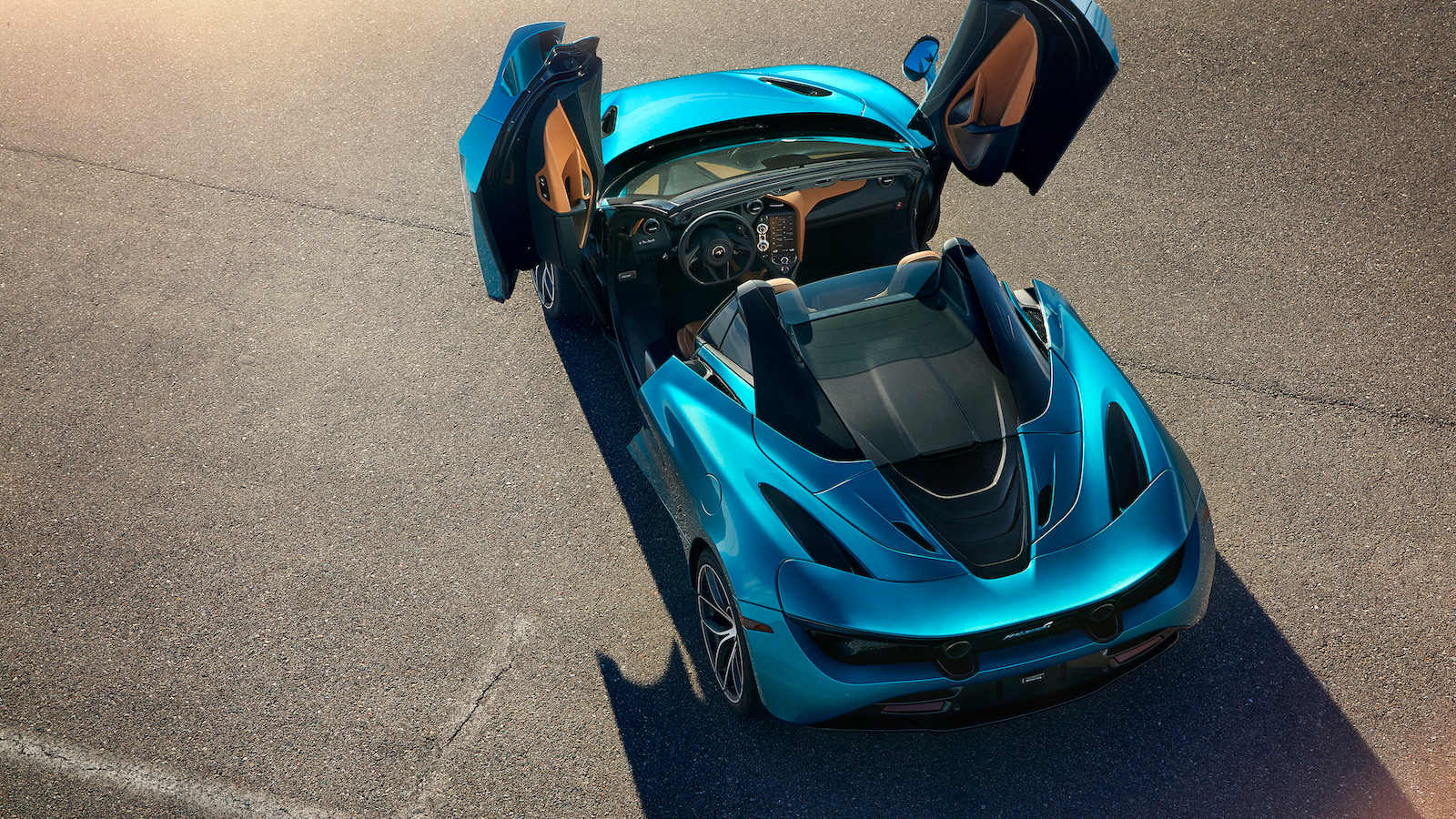 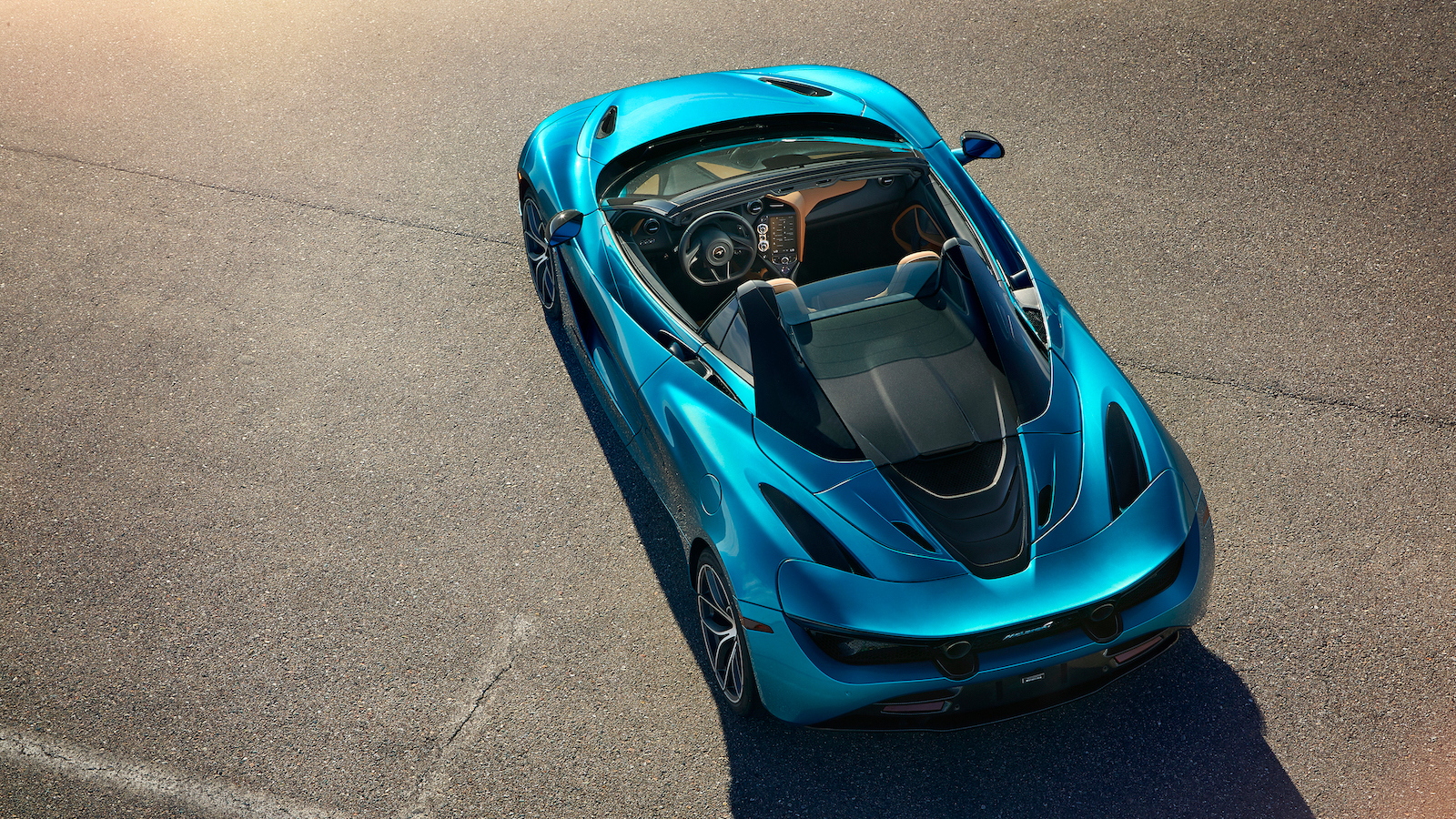 Among the hottest toys of the 1970s were the Kenner Super Sonic Power (SSP) race cars, which employed a central spinning wheel that propelled them over jumps, down the stairs, and into furniture legs in houses everywhere.

The utter ubiquity of these toy cars led to innovations, such as a spark emitter on the spinning drive wheel to add excitement. They also evolved from regular dull molded plastic to luminous hues in a shiny chrome finish.

Preferences are influenced early in life, and I’m left to guess that some McLaren product planners spent their formative years pulling the rip cords to accelerate the drive wheels on their electric chrome SSPs.

That is one possible source of inspiration for McLaren’s new palette of optional “Elite Colors” offered for the new al fresco edition of the company’s Super Series offering, the 720S. The 720S Spider differs from the coupe primarily in its one-piece folding hardtop roof, but McLaren is using the Spider to highlight ostentatious new hues, such as Belize Blue and Aztec Gold, that glitter like fashionable chrome wraps. Somewhere, Kenner’s SSP designers are smiling.

It isn’t like the 720S needs such flamboyant shades to draw attention, but these new colors certainly stand apart from the Skittles-inspired day-glow colors that are so common in this segment.

The 720S Spider also stands out from its coupe sibling for the most obvious reason: its top-down capability.

During changeable weather, McLaren’s new retractable hard-top design is much appreciated, as it lets the driver open or close the Spider’s top while driving at speeds up to 31 mph in just 11 seconds.

McLaren also offers an optional electrochromatic roof that switches almost instantly between a light 30 percent tint to a nearly opaque 95-percent tint. This means Spider fans can let the light in, even when the air is too chilly to open the roof.

The roof’s rear window glass also opens to let in a more direct exhaust sound. And on days when the sun is scorching, drivers can keep the roof closed and tinted dark but open the side and rear windows to still enjoy the fresh air.

Roof open or closed, the 720S Spider includes an innovative feature to improve rear visibility. The roof’s flying buttresses are rendered in transparent glass so they don’t block the view when changing lanes or parking but still provide the intended aerodynamic benefit. They may distort the view somewhat, but they allow for more than enough clarity to see whether there is a car lurking in the blind spot.

Despite the lack of a top, McLaren says the 720S Spider’s Monocage II-S carbon-fiber tub is so strong that it needs no additional reinforcement, and I found no evidence of flexing or cowl shake during a run through the mountains north of Phoenix.

Driving with the roof and windows closed, the 720S Spider is as comfortable as the coupe, and it seems as quiet. One section of road with textured pavement induced some droning from the tires, but otherwise the Spider never betrayed the rousing 710 horsepower available from its 4.0-liter twin-turbocharged V-8 engine.

Balance of performance and comfort

Stand on the gas pedal and it will launch the Spider to 60 mph in just 2.8 seconds and keep pushing to a terminal velocity of 212 mph. For those who insist on driving flat out with the roof open, the added drag of the air swirling around the cabin limits the Spider to a paltry 202 mph.

The 720S’s engine eschews fashionable direct fuel injection in favor a dual port injectors. McLaren says this arrangement allows for better response when getting on and off the throttle, and we agree that the car’s throttle mapping and response are spot on.

This is only one of McLaren’s iconoclastic choices. Others include retaining hydraulic power steering for its superior feel and feedback, and choosing Japanese Akebono brakes rather than the Italian Brembos used by most competitors. It is great to see a company that selects components for their merits rather than because they are the industry norm.

The 720S Spider’s cockpit is engagingly styled and lavishly appointed. Its vertically oriented 8.0-inch center infotainment display is also outside the norm but forward-looking and functional. Others have begun to adopt vertical screens, and they may become the norm in the future. Overall, the cabin is more luxurious and exclusive-looking than that of McLaren’s lower-line Sport Series cars and is on par with the Spider’s anticipated competitors.

Speaking of the Sport Series, from my previous experience driving the 720S coupe on the track back-to-back with the 600LT coupe, I can say that the 720S pays little price in terms of on-track speed for its cushier ride in real-life driving.

Everything about the 720S Spider seems designed specifically to provide a wonderful balance of performance and comfort in a segment that usually prioritizes one over the other. The Spider’s convertible top has multiple modes of use to let drivers balance fresh air and comfort with weather and their mood. The interior feels exclusive. The suspension enables both agility and a supple ride quality, and the lack of a top doesn’t seem to affect dynamics. With a starting price of $315,000, sure maybe this should be the expectation, but that hasn’t been the case with other cars.

The 720S Spyder is jaw-dropping it its own right. I just wonder how much McLaren would charge for some ’70s-period Kenner SSP graphic stickers to go with the shiny Belize Blue and Aztec Gold paint.

Bentley provided travel and airfare for this Internet Brands Automotive contributor to bring you this firsthand report.