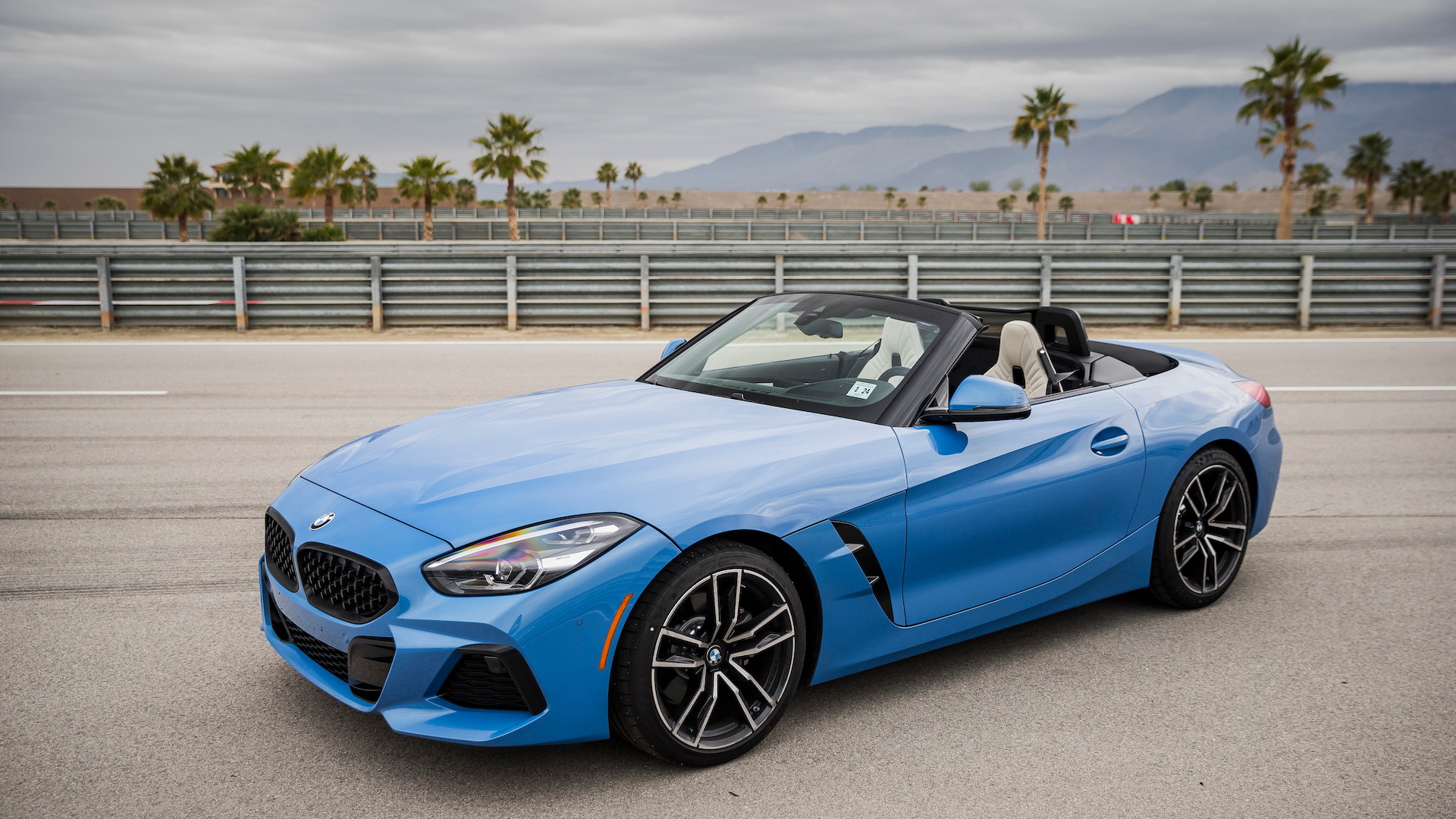 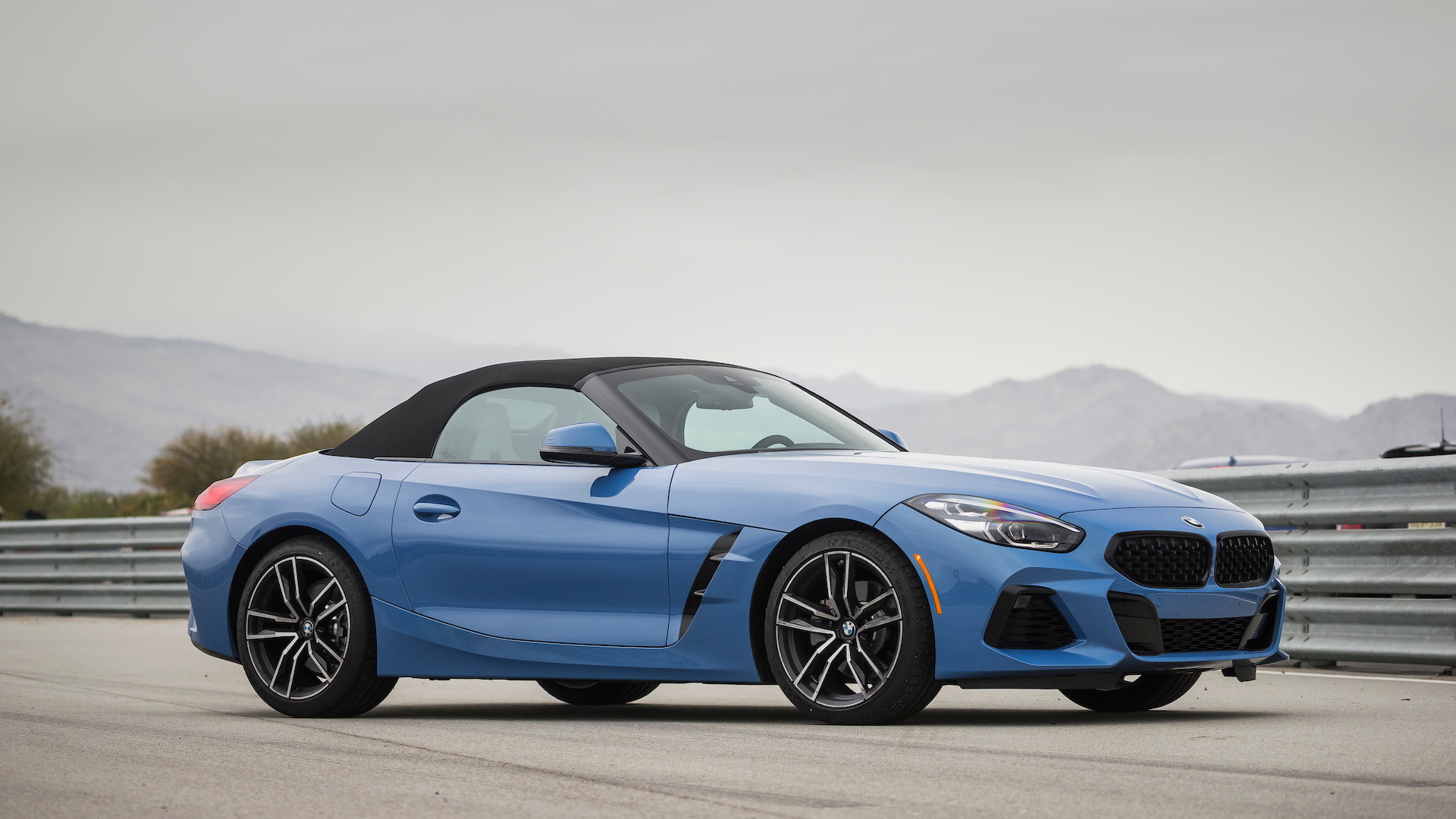 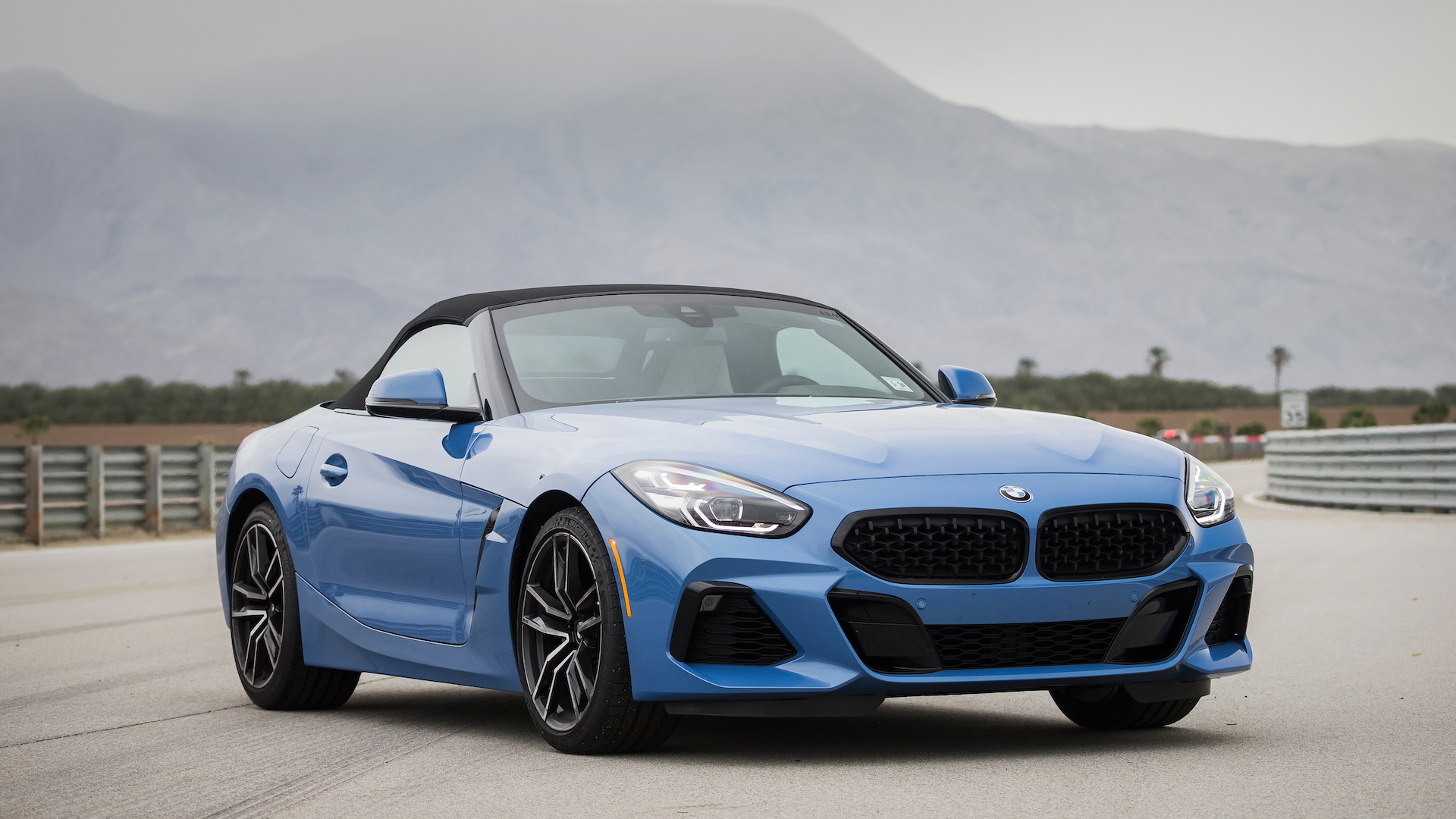 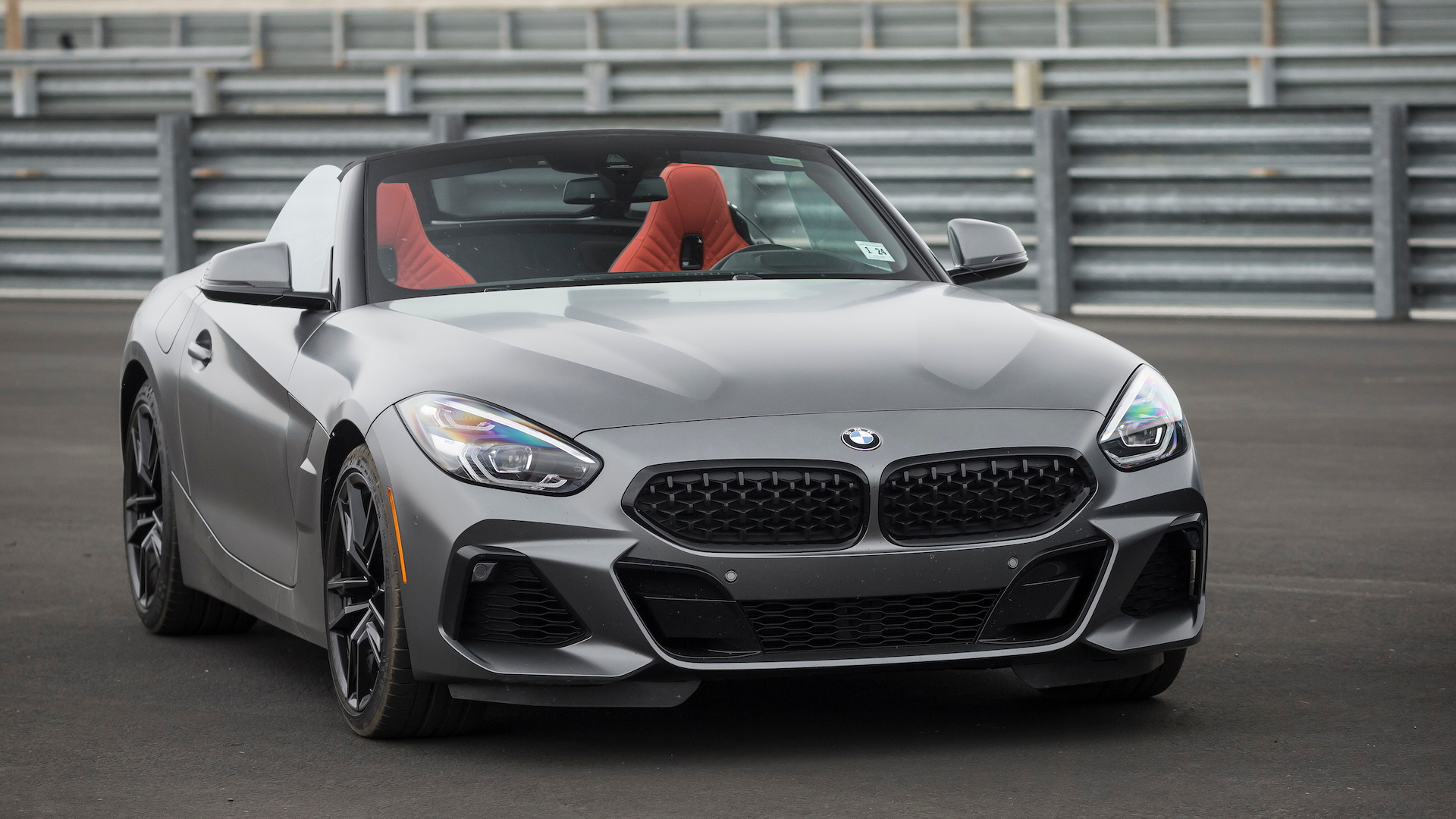 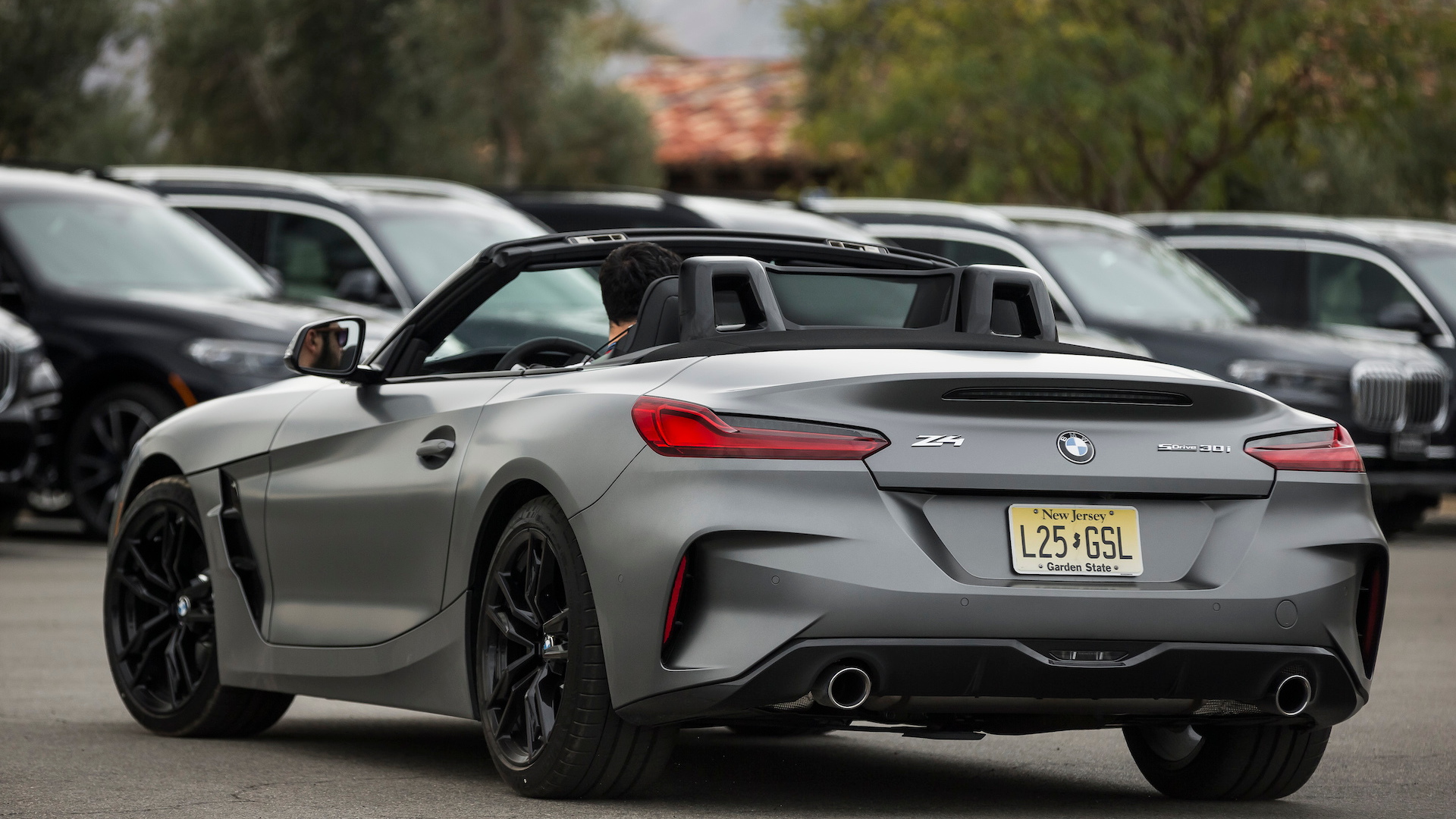 Coachella is a town, not a thing. For the 356 days a year when Boy Pablo and Childish Gambino aren’t in residence, it’s a prosaic farm community, where highlighter-pink and yellow signs hawk Medjool dates, shaken fresh from the trees that tower over checkerboards of agri-business green and dust-bowl khaki.

That other Coachella makes for a great place to test one-half of the 2019 BMW Z4’s personality: the convertible side. Shush along a stand of date palms, under a scud of clouds, top and windows down, and the scene wouldn’t look too different from those black-and-white posters of antique roadsters zipping down French country lanes.

The latest Z4 rekindles the romance BMW left to cool in 2016. Back in the ‘90s the Z3 was meant to rival the Miata in a roadster renaissance that never really happened. It got bigger, it changed its name. Things got complicated.

Now with crossover SUVs swarming—a half-dozen occupy the BMW showroom alone—the Z4 signals some smarter, if smaller, ambitions. It’s just trying to connect with the right person. It’s that guy who hangs around until all the other shooters have taken their shot and missed.

A hardtop swap for the better

To bring itself back from the dead, the Z4’s had to do away with a few things, such as a folding hardtop. It sports a soft roof now, one that tucks away quickly—in a half-minute, fast enough for a stoplight mood change, or at speeds of up to 30 mph, when the weather won’t wait for the next red light.

Of course, it’s better looking that way, anyway. The starter kit of cutlines and wide twin-nostril grilles and deep side-flank stampings doesn’t wear as well with the roof up: It looks like a Boxster rear-ending a Crossfire. Flick a switch, tuck it away, and it all meshes perfectly, the visual kin to the flouncy half-tuxedo Billy Porter wore at this year’s Oscars.

The crash of cues on the body gets sorted out inside the Z4’s luscious cockpit. BMW has grown more adept at integrating screens and controls into its cabins, and the Z4 tightens up its interior game even more. The wide, high-resolution touchscreen on the dash fairs in with the sculpted wave that cants controls toward the driver. A riot of colorful leather drapes across the seats and panels, for a price. The best detail: A textured aluminum on the console that mimics the texture of a ‘60s watchband.

Greater interior finish doesn’t translate into greater room, as far as we can tell. As we slid into insanely supportive sport seats, the Z4’s driving position tugged at our subconscious. The issue: The driver seat angles knees to the left, while the door handles nudge into the cabin for better side-impact protection. Gauges and screens tilt a degree or two off the true horizon, and it all compiles into a driving position that’s flawed but easily workable.

Anything seems doable if you head west toward the mountains with the top down and the sound system set to chill. In roofless mode, the Z4 sends just a ruffle of air over the top of a tall driver’s head, at a volume quiet enough that the enthusiastic drive noises it broadcasts all but overwhelm the wind.

To show off the 2019 Z4’s other assets, you have to go beyond Coachella and find a road where the road signs depict squiggles or sheep or falling rocks. In the Coachella Valley, that road would be Ortega Highway, an hour’s trip through mind-numbing traffic sometimes comprised entirely of gold-kit Lexus sedans.

Once you’re past the Starbucks and essing uphill past the first few turnouts—our GoPro lens cover is down there somewhere, off the mountainside, if you find one—the Z4 opens up and shows its heart. In the Z4 sDrive30i Roadster, that organ is a 2.0-liter turbo-4 with 255 horsepower and 295 pound-feet of torque. You know it from the 2-Series and the 4-Series, but here it only has to drag around about 3,300 pounds, or about 400 less than a 2er.

That makes for scintillating, trippy rides up and over the mountains, where you can let the turbo-4 air itself out and wind up into the 6,000-rpm range. BMW’s promise of a 5.2-second 0-60 mph time seems safe, and so does the predicted 3.9-second time for the coming 382-hp Z4 M40i, with power brought to you by BMW’s thrilling turbocharged inline-6.

Toggle through the shift paddles and the turbo-4 reels out torque with gusto. Flick the pedal on the left and you’ll trigger nothing, mostly because there isn’t a third pedal: The Z4 is automatic-only. Its 8-speed sits at the top of the best-automatics-ever list, and it’s as responsive to commands as ever. It is still a sports car if the shift lever never has to move, though?

Put us in the “yes” column. The 2019 Z4 doesn’t need a stick to hit all the correct notes in a sports-car symphony. It has the finely tuned grip to match its prodigious power—and that’s more than authentic enough.

With a wider track than the 2016 car, and the upcharge 19-inch wheels and tires available to turbo-4 drivers, the 2019 Z4 plants itself perfectly in any given corner on Ortega’s kinky backside. It draws on some reliable 3-Series bits to do so: BMW drew a strut and multi-link suspension with double joints for more precise control, and cast some pieces in aluminum to drop unsprung weight.

It also grabs adaptive dampers, an easy $700 upgrade that makes the magnitude of difference in the Z4. The dampers give the Z4 a margin of stretch and flex, like every pair of Polo jeans on the shelf today. You might prefer the straight-up approach of conventional springs and shocks, but the flexy stuff fits more situations better—and the same’s true for the Z4 with the adaptive setup. It rides very well, especially for a short-wheelbase car, though there’s not much it can do when the road breaks into tectonic plates. The adaptive shocks excuse many road sins, but some just can’t be forgiven.

Shod with 19-inch tires and the adaptive shocks, the Z4 finds an admirable default drive mode that grows more steely in Sport and Sport+. Those modes bring sharper focus for the variable-assist electric power steering, too. It’s content to thread its way gently through wide sweepers in Comfort mode with grace. It’s a little behind the curve even in Sport+ mode, where anything more intense than 7/10ths cries out for more steering feedback. It just doesn’t have much in any mode.

It does have all the essentials, all in place when and where they need to be. For us, that’s heading south on Highway 74; somewhere north of 3,500 rpm, where the bratty turbo-4 exudes a mellow tenor siren song; and with an hour or two before we have to turn back.

Settling up your bar tab at the BMW dealer won’t take much more than $50,000 if you play your cards right.

We could quibble more over its insistence in charging $80 a year for Apple CarPlay compatibility beyond year one—on top of a $50,695 bill for a bare-bones car, yet. Still the latest Z4 gets standard LED headlights, the power-folding soft top, and Bluetooth with audio streaming. There’s a $2,450 track handling package with a sport rear differential and heavier-duty brakes, and other options we’d tick, such as leather upholstery, a head-up display, and wireless smartphone charging.

Take them all? That drives the price of the 2019 BMW Z4 sDrive30i Roadster up near $65,000, where the 2020 Z4 M40i Roadster is sure to play—Porsche 718 Boxster territory, in other words. That turbo-6 companion piece shows up in showrooms in just a few more weeks—which means it’s almost time for another drive among the palms.

Siri, write a note: “Put the dates on your calendar again.”

BMW provided travel and lodging to Internet Brands Automotive to bring you this firsthand report.