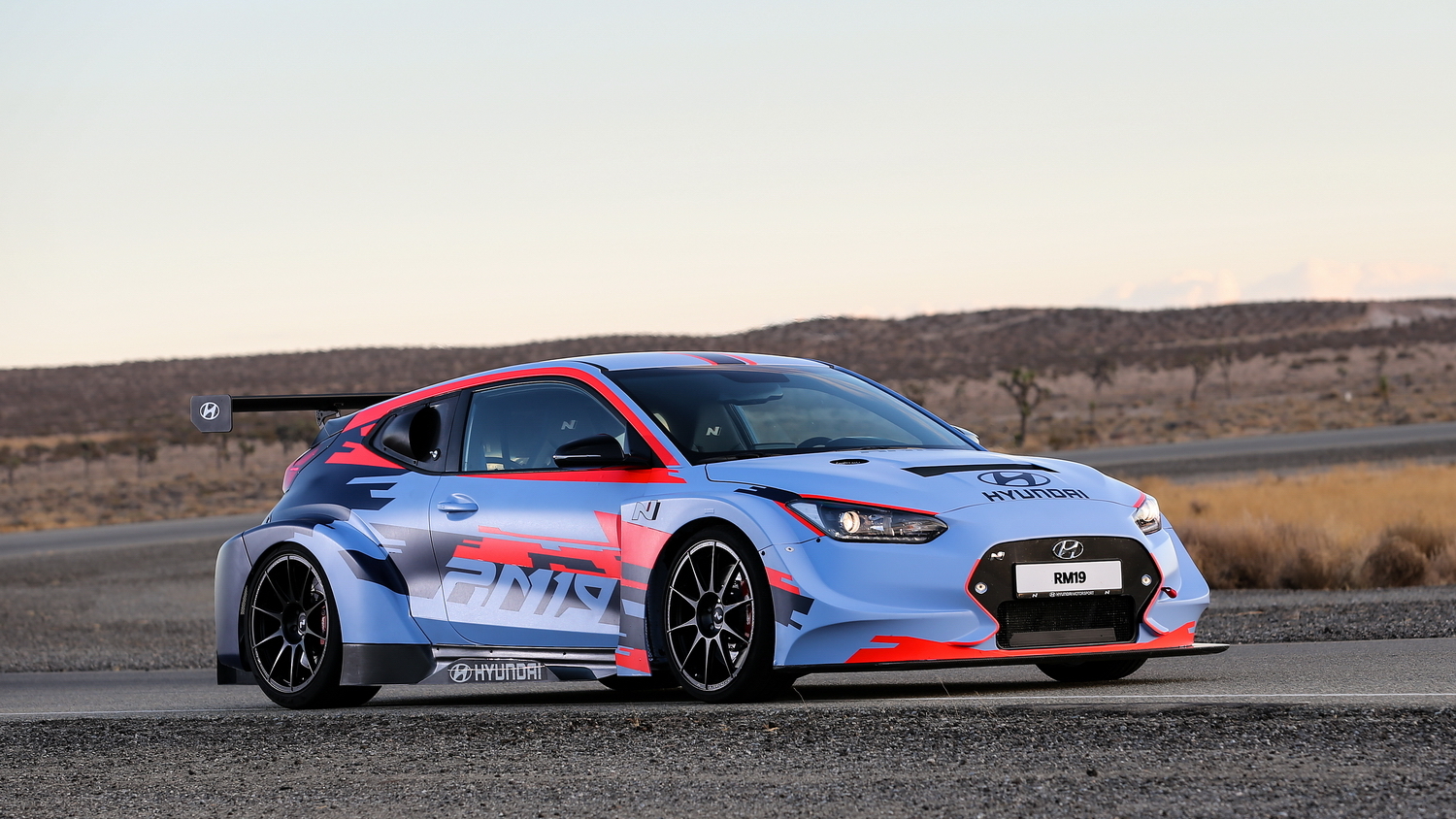 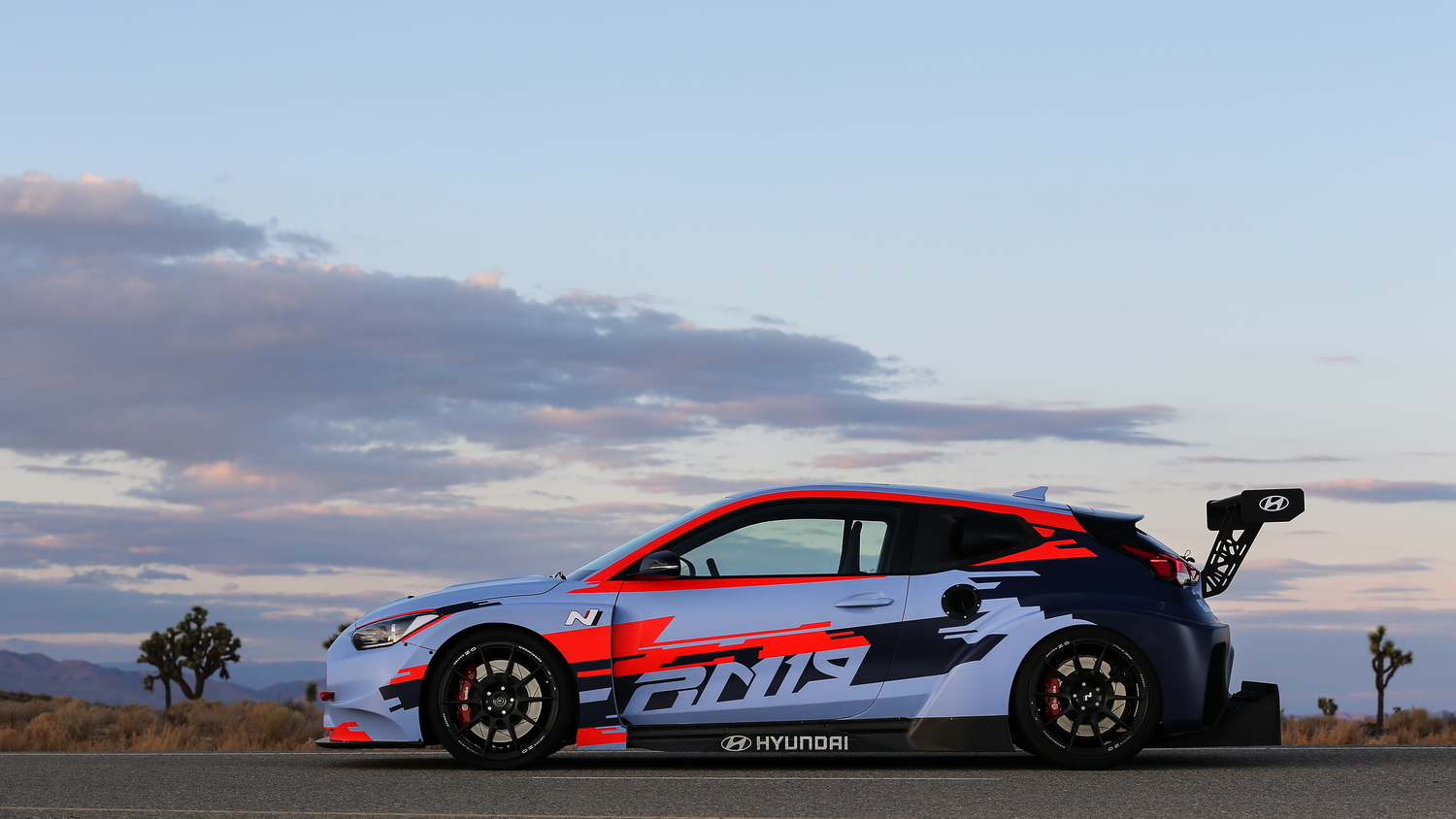 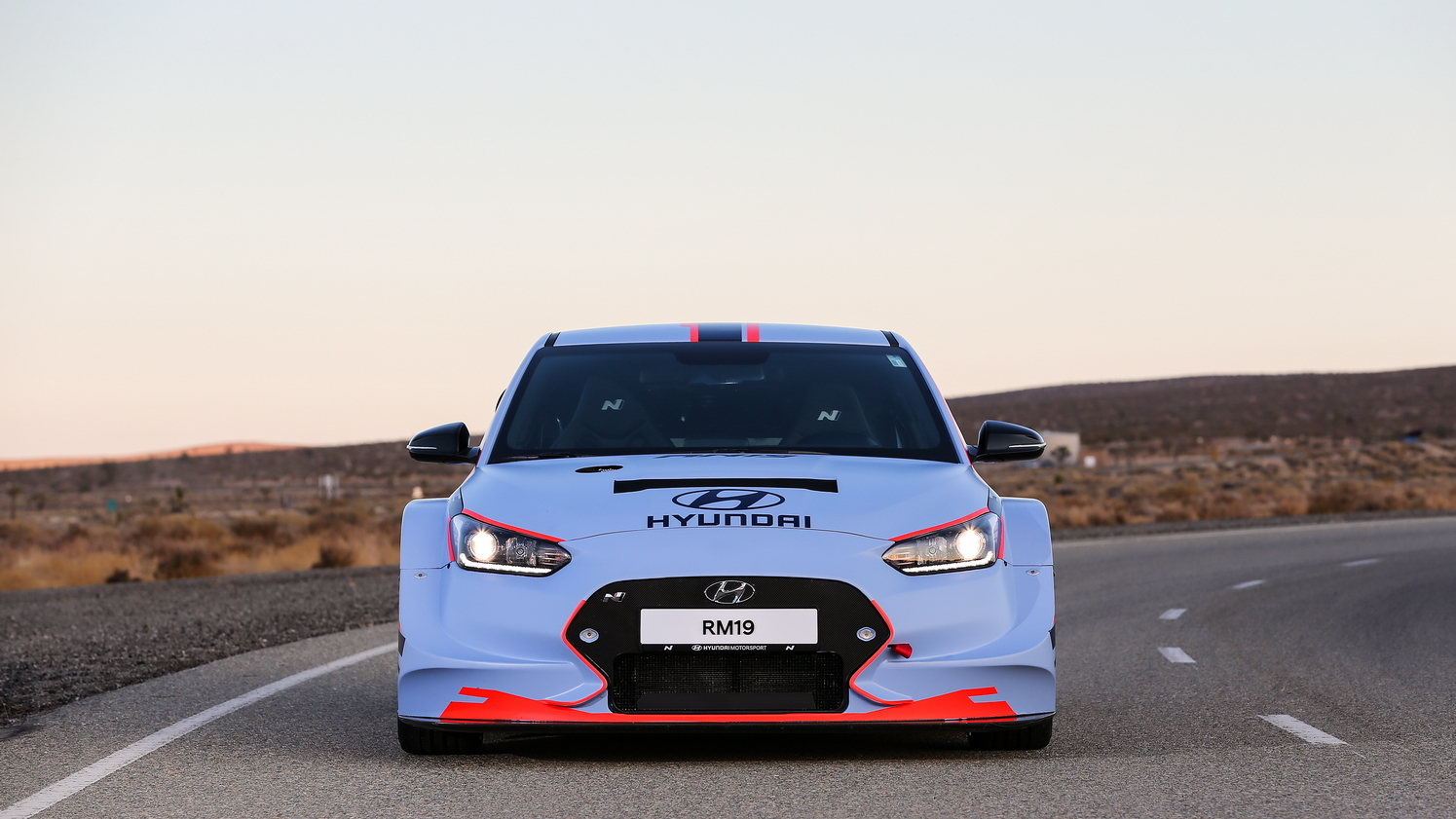 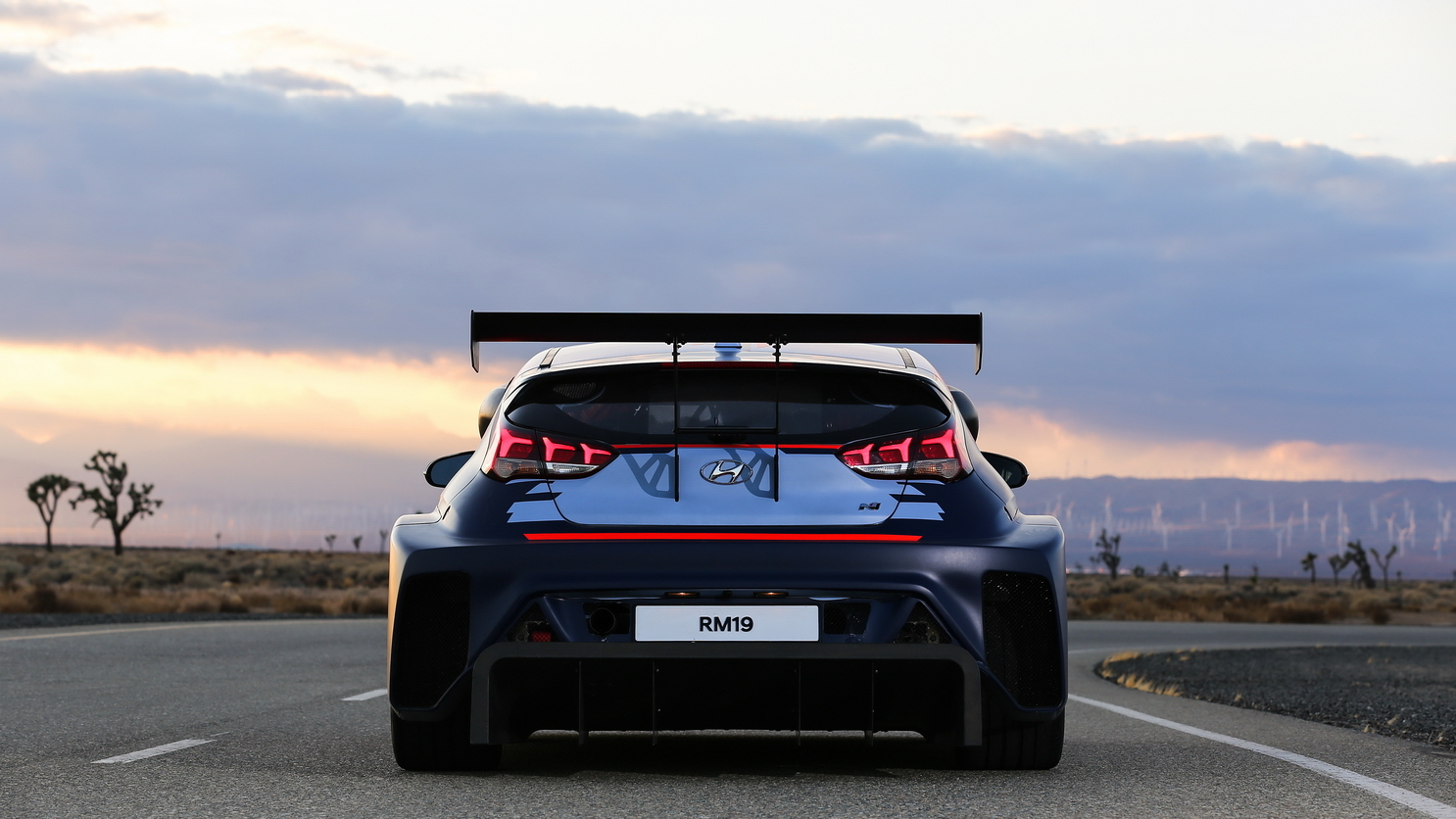 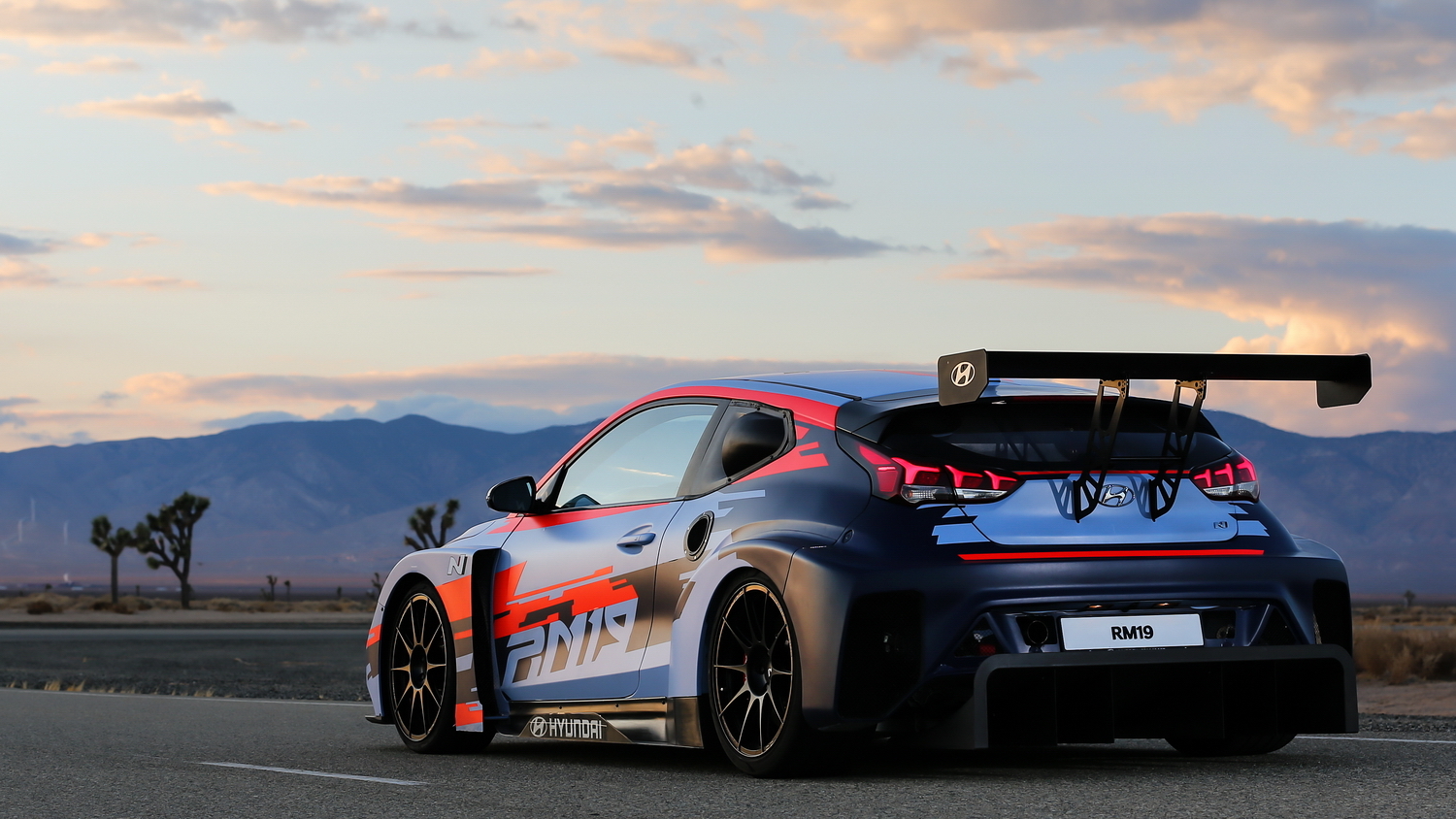 The prototype is half race car, half would-be sports car. The mid-engine Hyundai RM19 hatchback might become a halo car for the N performance brand, though it could also be a flight of fancy. Don't know yet. What is clear is that, here, on the Hyundai-Kia Motors California Proving Ground in the Mojave Desert behind the wheel of a car that doesn't yet exist, I could make a fool of myself.

Strapped into a five-point harness, I’m about to hit the proving ground’s winding road course. A racing steering wheel with paddle shifters hooked to a direct-shift gearbox sits in front of me and behind me are a roll cage, a wall, and a racing engine.

This is my first experience with a direct-shift gearbox, which combines elements of a manual transmission and an automatic. It has three pedals, and it requires using the clutch pedal when pulling away in first gear and returning to Neutral. From there, the shifts are handled by carbon-fiber paddles behind the steering wheel—pull the right for the next higher gear and the left to downshift.

My Korean co-pilot, a Hyundai ride and handling engineer who introduces himself only as Yoon, puts the race-bred stability-control system in Dry Stable mode (one of 12 available modes) and says the gearbox requires judicious use of the clutch to get the car to pull away smoothly. Should be easy.

I click the paddle to engage first, gently release the clutch to pull away, and…stall it. I try again, letting the clutch out even more deliberately…and stall it.

For the third try, Yoon says I should rev the engine to 3,000 rpm, then let out the clutch. I do, and it works. We’re out on the track, but soon a warning flashes in the instrument cluster: “Parking Brake Engaged.” Had I simply released the parking brake in the first place, I wouldn’t look like such an idiot right now. However, given that I’m maybe the fourth of fifth guy in the car, we’re on flat ground, and parking brakes can warp hot rotors, I figured we weren’t using the parking brake. Live and learn.

My time in the RM19 is limited to three laps around the Proving Ground’s 3.1-mile road course, which is flat as a pancake and devoid of topological reference points this far out on the desert. It’s a twisty track that can get dusty (and therefore slick) in spots, and it has lots of long turns.

Put simply, the RM19 is brilliant here. Stable at speed, willing to hold a line through turns, and quick to change directions, the RM19 puts a smile on my face as I flog it through the corners. Light, direct steering points the car in my chosen direction immediately.

Like other mid-engine cars, the RM19 wants to push into corners when speed isn’t sufficiently arrested, and it can get tail happy if I get on the throttle too soon when exiting a turn. The latter happens on two occasions, but each time I easily catch it with a flick of opposite steering angle. I’m aided in my quest for stability by the car’s 48/52 front/rear weight ratio, which is far more balanced than the 40/60 ratio of most mid-engine cars, and wide rear tires that are always clawing for grip.

However, at least two drivers aren’t so fortunate, and they spin the car in the track’s tight right-left hairpin. A bit of dust in that turn could be the culprit, but I can see how doubling down on early throttle application after an apex would cause a spin.

The RM19 rides on 20-inch Pirelli P Zero summer tires, 245/30 up front and 305/30 in the rear. Though a good tire, the P Zero isn’t as sticky as a P-Zero Corsa or especially the Trofeo R, which is essentially a racing tire for the street with a modicum of tread. I’d expect Trofeo Rs on a hatchback that looks like it just emerged from victory lane. Perhaps the grip of Trofeo Rs would have prevented those spins, but maybe those guys were just hell-bent on pushing the RM19 past its limits (it can happen to any of us).

Hyundai is developing the RM19 as a possible (Editor’s note: make that likely) halo car for the N performance brand, but Hyundai’s head of research and development Albert Biermann says it’s more than that. He calls it a “rolling testbed” for Hyundai to examine “future solutions.” The latter appears to be electrification.

The race car roots are obvious. They come from the Veloster N TCR customer race car. A massive rear wing sits high above the tail, a chunky diffuser juts out from the rear end, and widened fenders festooned with cooling ducts accommodate massive tires. Those roots also extend to the powertrain. It’s a 360-horsepower 2.0-liter turbo-4 backed by a 6-speed direct-shift gearbox, and both come from the same race car, only here they’ve moved about 5 feet rearward where they drive the rear wheels instead of the fronts.

The turbo-4 builds speed quickly here and blows its raucous tune into through the rear hatch area into stripped out cabin with little filter. The direct-shift gearbox rattles off quick, jolting shifts with a slight pause in power delivery, and a set of lights in the dashboard makes it easy to grab the next gear at the right time. However, this powertrain doesn’t matter. Hyundai plans to replace the engine with a 2.3 to 2.5-liter turbo-4 in the next version of the RM (RM20 if it’s coming next year), and the transmission will change to the 8-speed, wet-clutch, dual-clutch gearbox that is coming for the 2020 Veloster N. A street version would also get the full sound-deadening treatment.

The brakes, while effective, could benefit from a higher pedal with better initial bite. They never fade on me, but the 15-inch front rotors are smoking when I pull into the pit after a safe but spirited run. Nonetheless, Hyundai puts another 20 or so journalists into the car throughout the day without a problem.

Hyundai aims for fun over lap times in its N cars, and the RM19 certainly delivers. It’s fun to flick from turn to turn and I’d love another couple of track sessions to learn exactly where the grip ends and how to control the car on the edge. Maybe someday.

Seven years in the making

The RM19’s track savvy is quite impressive given that it’s a cobbled-together version of the Veloster TCR race car with a revised engine placement, a new rear subframe to accommodate that engine, and a new double-wishbone rear suspension. Further, Biermann tells me this car has benefitted from only three weeks of tuning because much of the development was done with simulations.

However, the RM19’s story reaches back farther than a few weeks. The RM project dates back to 2012, and the car itself has cycled through RM 14, RM15, RM17 and now RM19 iterations, each named for the year in which it was built.

The first couple versions used a one-off aluminum spaceframe. This car is based on the Veloster.

“The core job was to develop the chassis. To make a chassis and a vehicle that was ready for more than this,” Biermann says. “This is not where it ends. This is just where it starts. We have other plans with RM as of next year. We will move also into electrification and so on.

Biermann and Hyundai obviously have a ways to go. His team is aiming for street and track capability, but a production version of this car would need to be fine-tuned, with tweaks to the bushings, bars, springs, and brakes. It might also get adjustable dampers to give it a dual-purpose personality, and it would need a street-legal stability control system. Much of the basic work on balance, responses, and tuning has been done, and I like the chances of it turning into the type of “corner rascal” Biermann wants.

Will Hyundai build it?

Going back at least to last year, Hyundai has presented a vision for the brand that includes a pyramid of N products. Motorsports sits at the top and a halo car is one step down. Now, Hyundai has a drivable prototype that it has shared with the automotive press. Clearly, the company wants to build a production version of the RM19, but Biermann says that isn’t a certainty, at least not only one year after the N brand debuted in the U.S. with the Veloster N.

“I think we need to grow more basis, more fan basis, more enthusiasts, and then at some point later we can be ready for such a vehicle,” Biermann says.

Given the performance of the Veloster N and my limited exposure to the RM19, count me as one of those fans, and put in my vote for a production version of Hyundai’s teased halo car.

When it arrives, though, I’ll remember to disengage the parking brake.

Hyundai paid for lodging for Internet Brands Automotive to bring you this firsthand report.