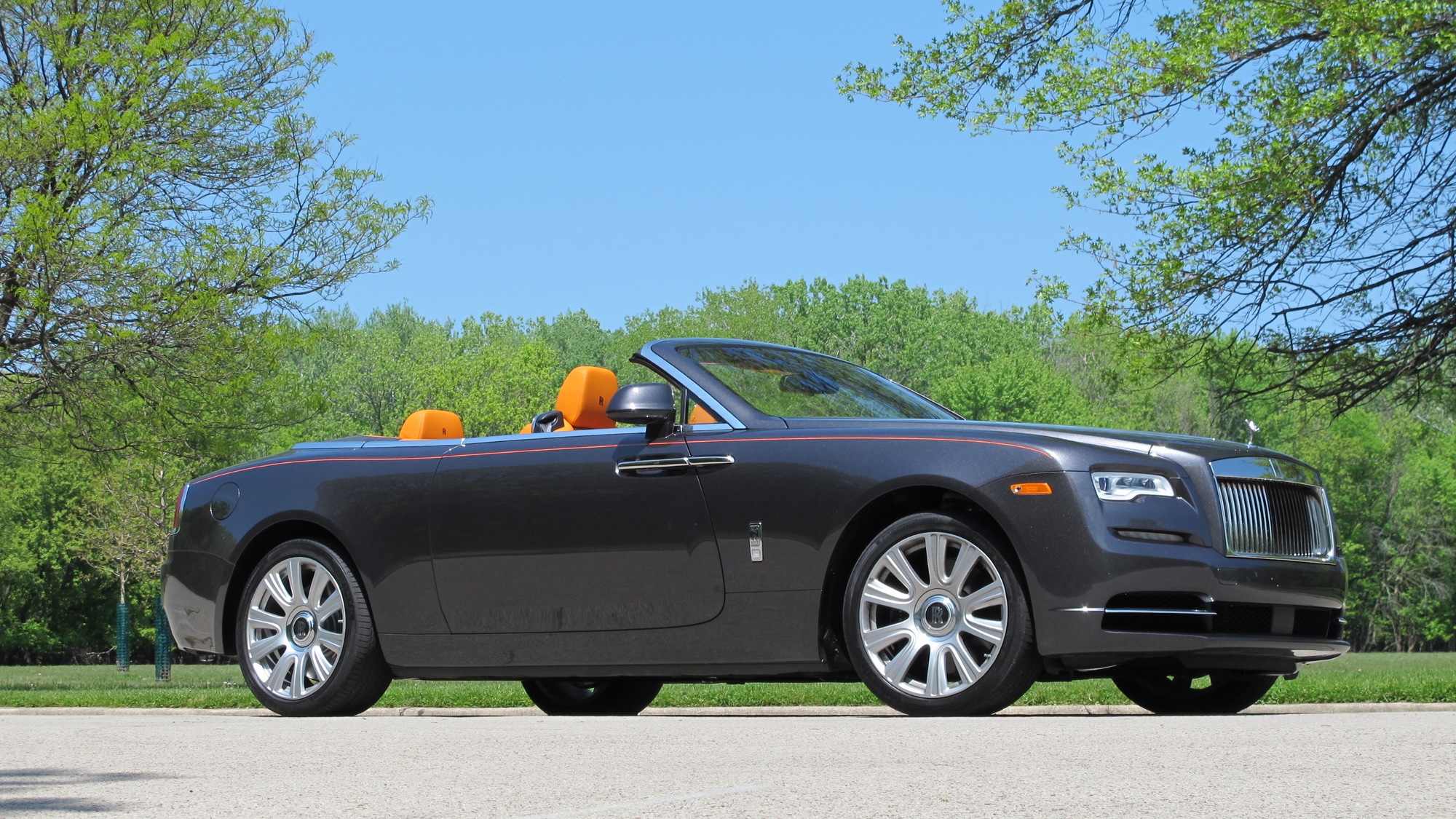 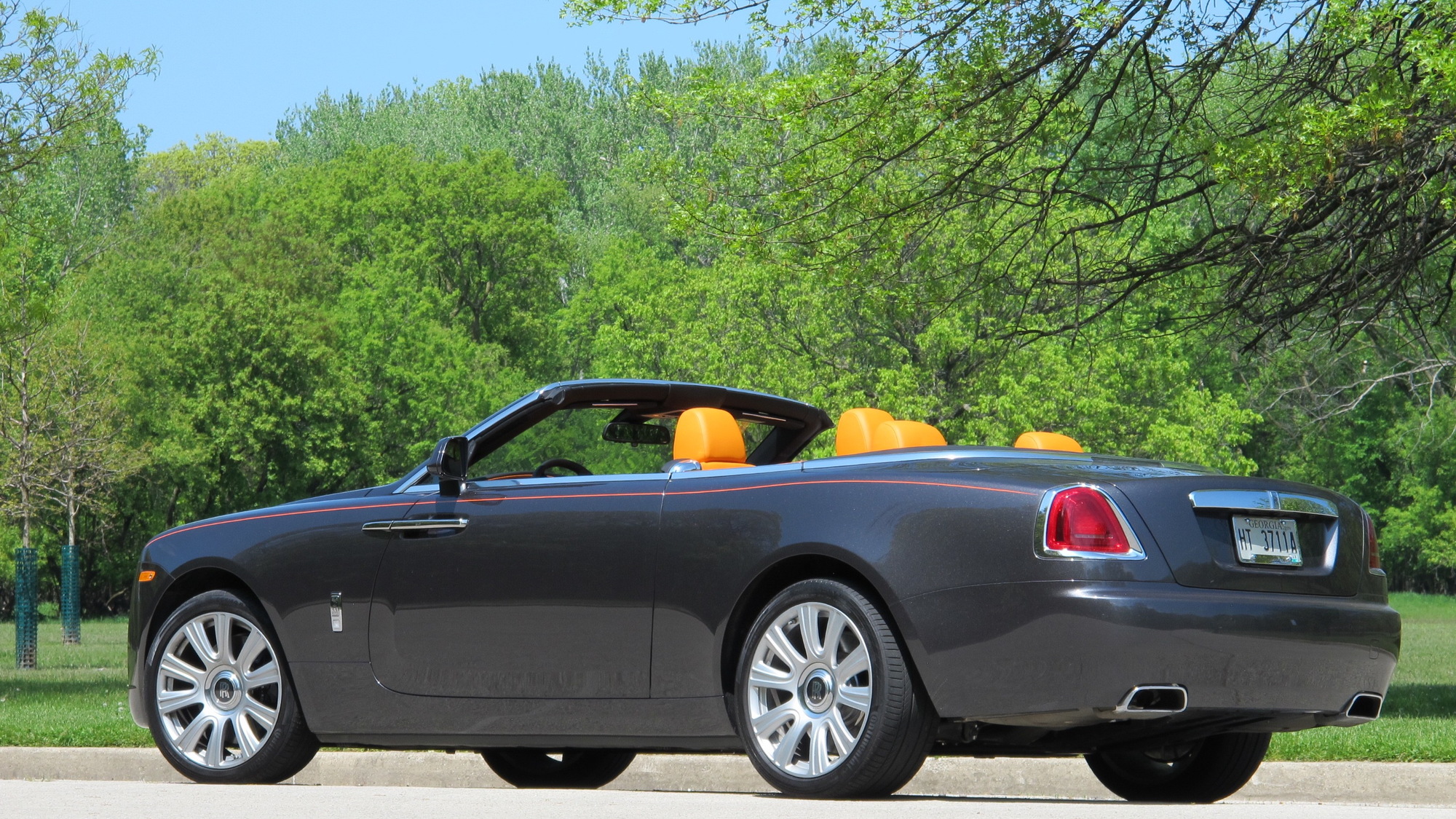 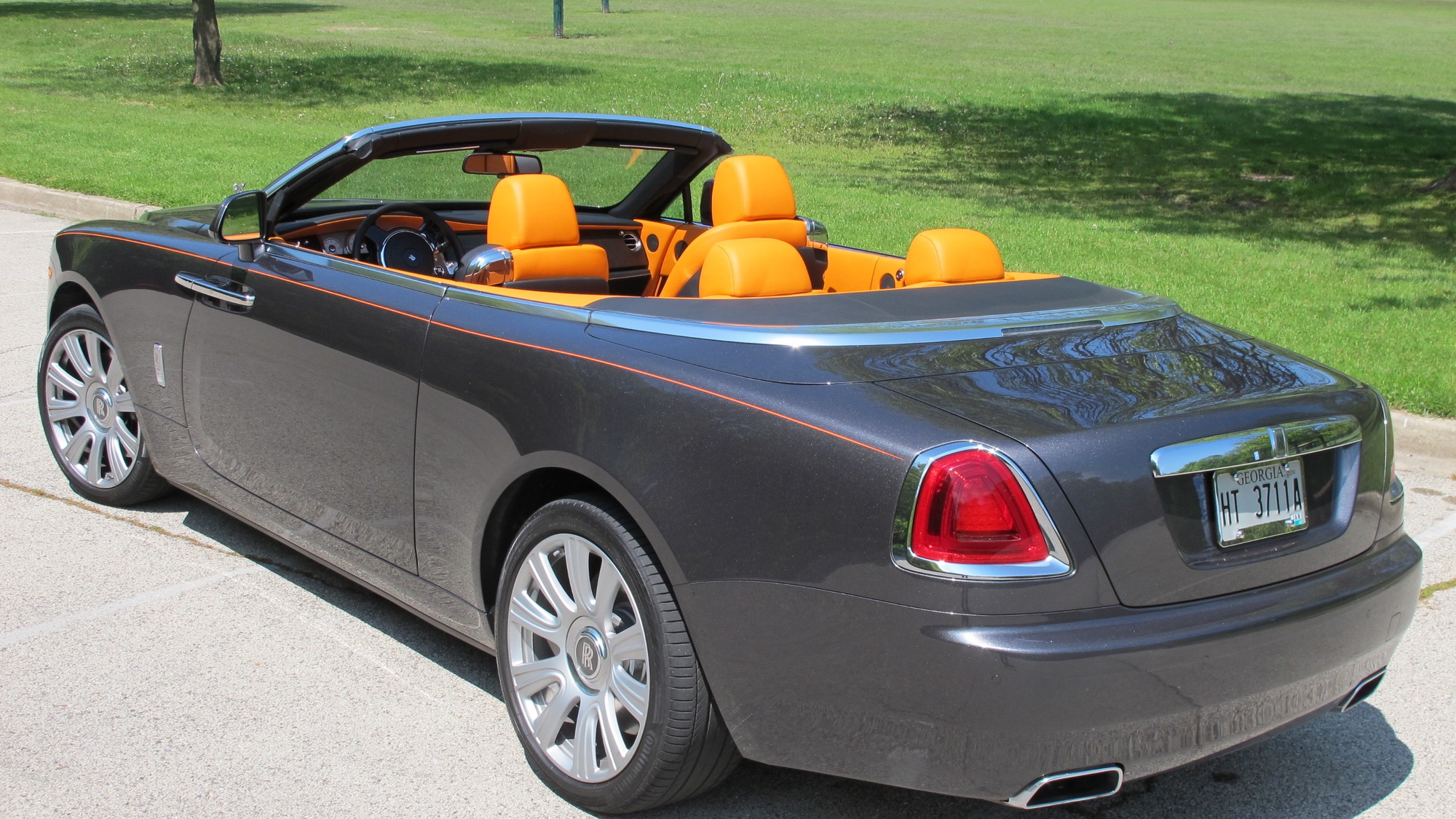 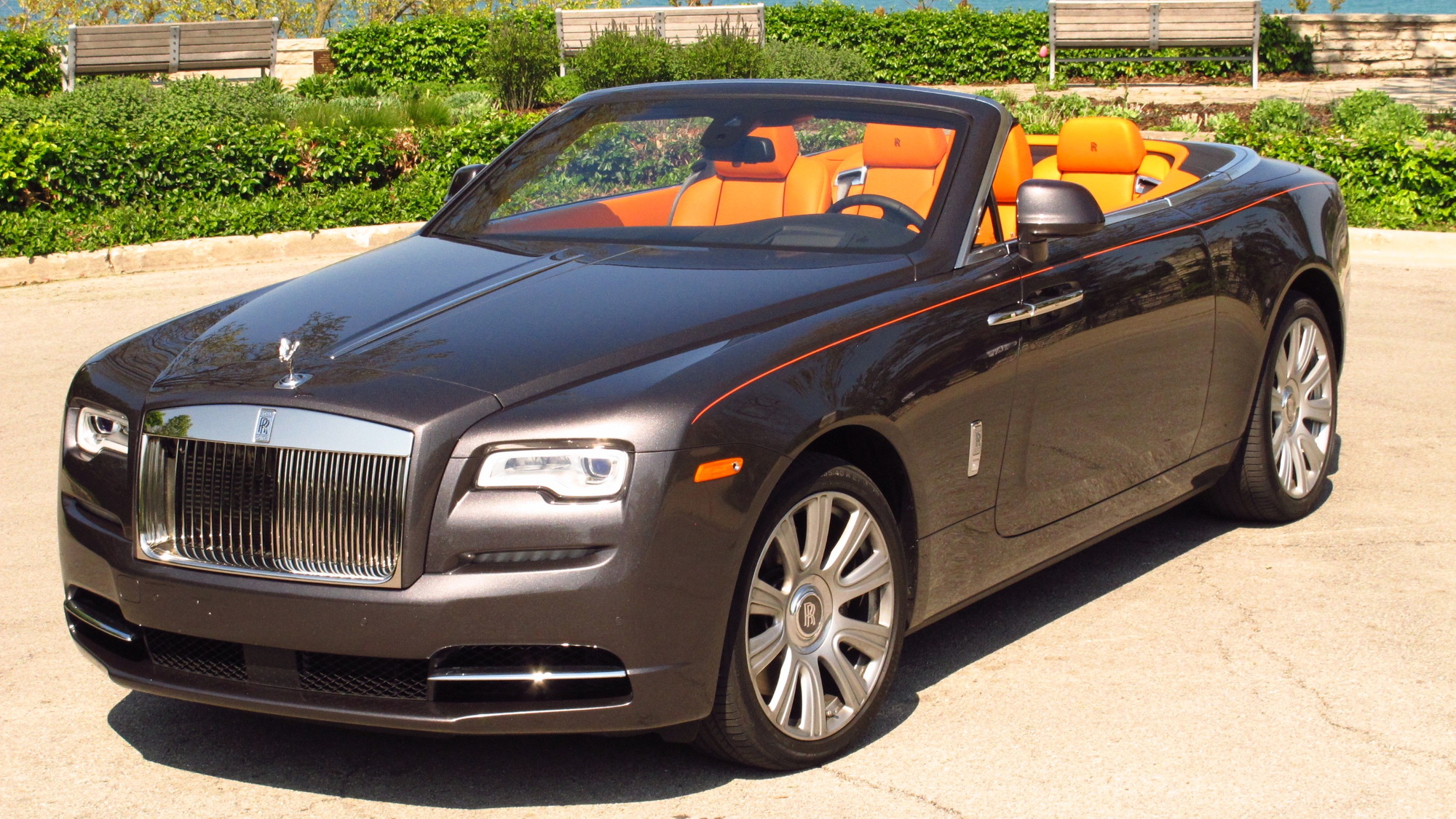 Those aren't the words of a noted poet. They aren't the best that I can do when trying to romance a woman. They are the heady words of the Rolls-Royce press kit describing the visceral meaning of the name for its newest car, the 2016 Dawn. A four-seat convertible, or drophead in Rolls-Royce speak, the Dawn is essentially the droptop version of the Wraith coupe, though Rolls-Royce is quick to point out that 80 percent of the body panels are new. It is a $340,000 piece of British rolling sculpture that announces you have arrived, and arrived in style.

As a humble automotive journalist, I haven't arrived and probably never will. However, I am, on occasion, allowed a glimpse of the high life by automakers like Rolls-Royce. For 48 wonderful hours this week, I was able to feel what it's like to drive a car that costs more than most mortgages, outfitted with a BMW M3's worth of options. Here's what I learned.

Some sports cars make you a better driver because of their innate balance and feel. The Rolls-Royce Dawn makes you a better chauffeur because it’s just so smooth.

Yes, the Dawn has a 563-horsepower twin-turbocharged 6.6-liter V-12, but it doesn't deliver neck-snapping grunt. Instead, at launch the car squats a bit, raises the bonnet like a yacht cresting a wave, then it creeps away from a stop as easy as you please. Rolls-Royce calls the power effortless and that’s probably the best word for it. This isn’t a car for which you bother measuring 0 to 60 mph times. Suffice it to say, there is plenty of power on tap to get ahead of the proletariat in their transportation appliances. If you must know, though, 0 to 60 mph takes 4.9 seconds. Plebe.

The ZF-sourced 8-speed automatic transmission delivers shifts that are almost imperceptible, and global positioning technology relays information to the car to help pre-select the correct gear based on driving style and the upcoming stretch of road. The 8-speed works in tandem with the V-12 to deliver thrust when needed and remain in the background otherwise.

Rolls-Royce places the Dawn between the Wraith, which it touts as a grand tourer, and the ultra-luxury Phantom in terms of dynamics, calling it a super-luxury boulevardier. The ride is sublime. Even with notoriously hard riding runflat tires, the Dawn ignores bumps like a hedge fund manager who can’t be bothered to notice the beggar outside of his downtown firm. Though doggedly smooth, swells and undulations can make the ride floaty, but never abrupt, and cause a bit of head bob. There is also some nosedive when the car comes to a stop, though a good chauffeur would release the gas early and feather the brake pedal to make stopping as smooth as the launch. All of this serves to make the occupants as comfortable as possible, without disrupting their business calls or socializing.

With its 5,700-pound curb weight, the Dawn desperately wants to keel over in turns, but it is fitted with active roll bars and air springs that conspire to keep it relatively upright. You can feel them at work in sharp turns. In fact, I was impressed that the Dawn didn't fuss when I attacked a twisty stretch of road and a few cloverleaf off-ramps. It may have stumbled initially upon entry, but it quickly righted itself like a model on the catwalk who gets her heel caught, but manages to look graceful anyway.

The interior is the place to be

As elegantly as the Dawn drives, it's even better to gain entry to the cabin. Immediately upon opening the rear-hinged suicide-style driver's door (coach door, according to Rolls-Royce), I was struck by the bold beauty of my test car's Mandarin leather-wrapped cockpit. The leather contrasted wonderfully with the dark open-pore wood trim and the finely detailed chromed controls. A young guy in a BMW said I was "straight up savage," for choosing that cool orange interior. If only.

Sitting behind the wheel of a Rolls is a unique experience. The steering wheel is flatter than most and its carefully applied hand-sewn leather feels great to the touch. Rolls-Royce allows buyers to choose the color of the leather, stitching, piping, dash top, door panels, console lids, and seat inserts, as well as the grain of the book-matched wood and just how much of the interior will be covered with that wood and leather. Many of these options cost thousands, if not tens of thousands, of dollars.

The seats are supremely comfortable and offer an abundance of room front and rear. Rolls-Royce makes fun of other 2+2 convertibles, accusing them of being antisocial and saying 2+2 doesn't equal four, while touting the Dawn's true four-passenger capacity. At 208.1 inches long with a 122.5-inch wheelbase, that's not much of an accomplishment. By comparison, a Ford Expedition is 206.5 inches long with a 119-inch wheelbase. This is a big car. It should, and does, fit four comfortably.

The convertible soft top is a work of art unto itself. It raises or lowers in 22 seconds at speeds up to 31 mph in a motion that Rolls calls a silent ballet. It stows away without a trace of the mechanism showing, and, when up, it offers absolute isolation. Rolls says the Dawn is the quietest convertible in the world, and I believe it. Why did Rolls chose a soft top instead of a retractable hard top? Because of the look, the romance, and the tradition. According to the Dawn's press kit, "there is nothing more romantic than driving a convertible in the rain at night and hearing the drops pattering on the roof." Only a British automaker could come up with that line.

It changes the way you think

I couldn't bring myself to drive the Dawn like I would drive any other car. Before I even got behind the wheel, I made sure to shower and shave. Instead of the usual T-shirt and blue jeans, I put on a button-down shirt and slacks and was inspired to go shopping at Nordstrom. When I saw the $155 dress shirts, I headed for the exit, then went downtown to one of Chicago's excellent steak places where I could valet the car and act like a bigshot.

During my drive, I even considered listening to classical music, but instead I perused the rock stations on satellite radio and settled on an assortment of Rage Against the Machine, Judas Priest, Alice Cooper, and Black Sabbath. Government Mule’s cover of Sabbath’s "War Pigs" seemed quite poignant, especially when cranked through the 18 speakers of the car's $8,625 1,300-watt Bespoke Audio system.

With my uncultured lower-middle class Midwestern upbringing and meager portfolio, I usually don't understand ultra-luxury cars. The Dawn in particular is certainly not a value when compared to a Mercedes-Benz S-Class Cabriolet. Instead, it is something much finer and, in turn, it makes you appreciate the finer things. For a short time, my eyes were opened from the ethereal dark of the night. There is truly a reward for success, and cars like the Roll-Royce Dawn are a big part of it. I enjoyed that reward, if only for a moment. Alas, it is gone.