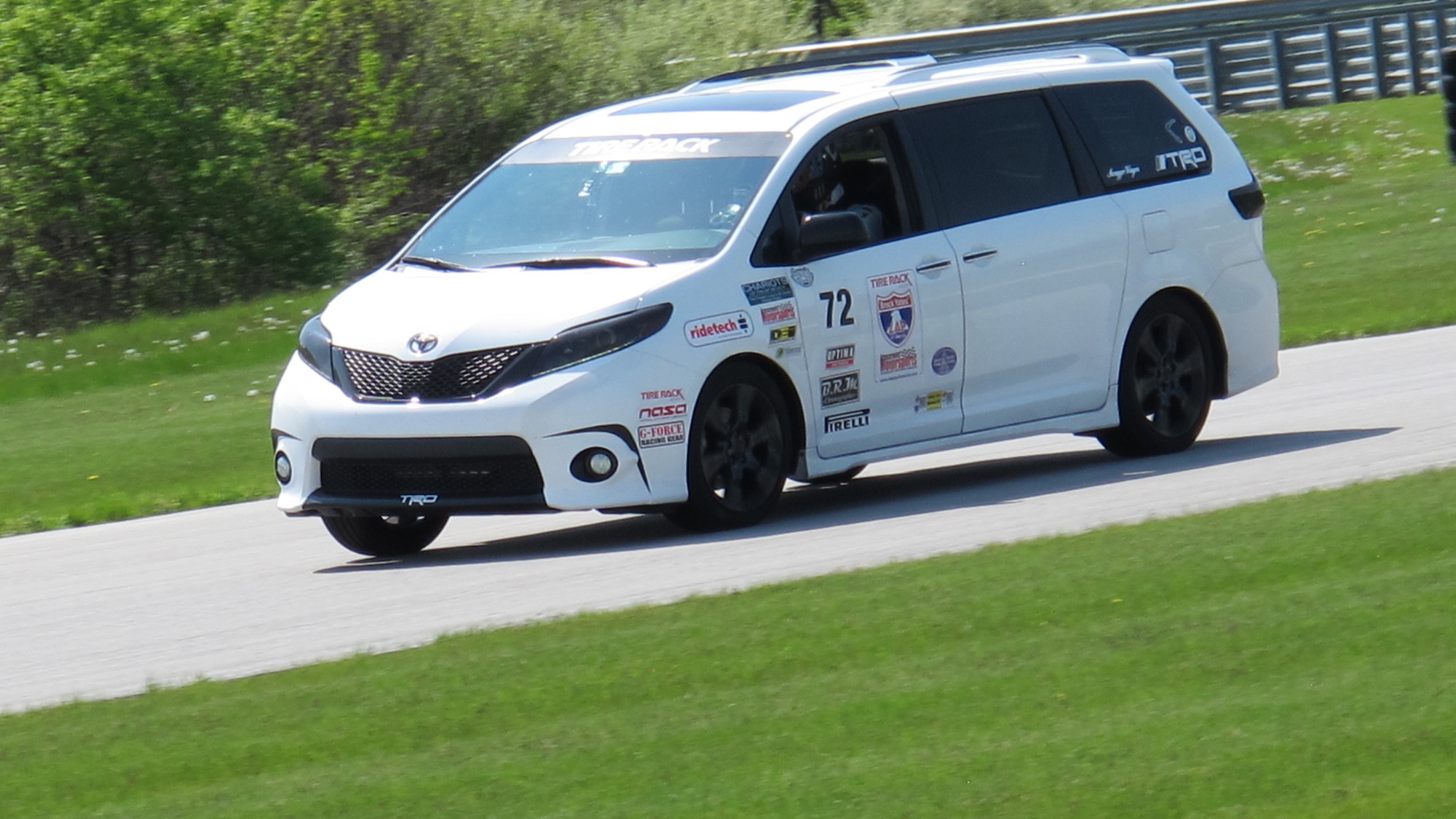 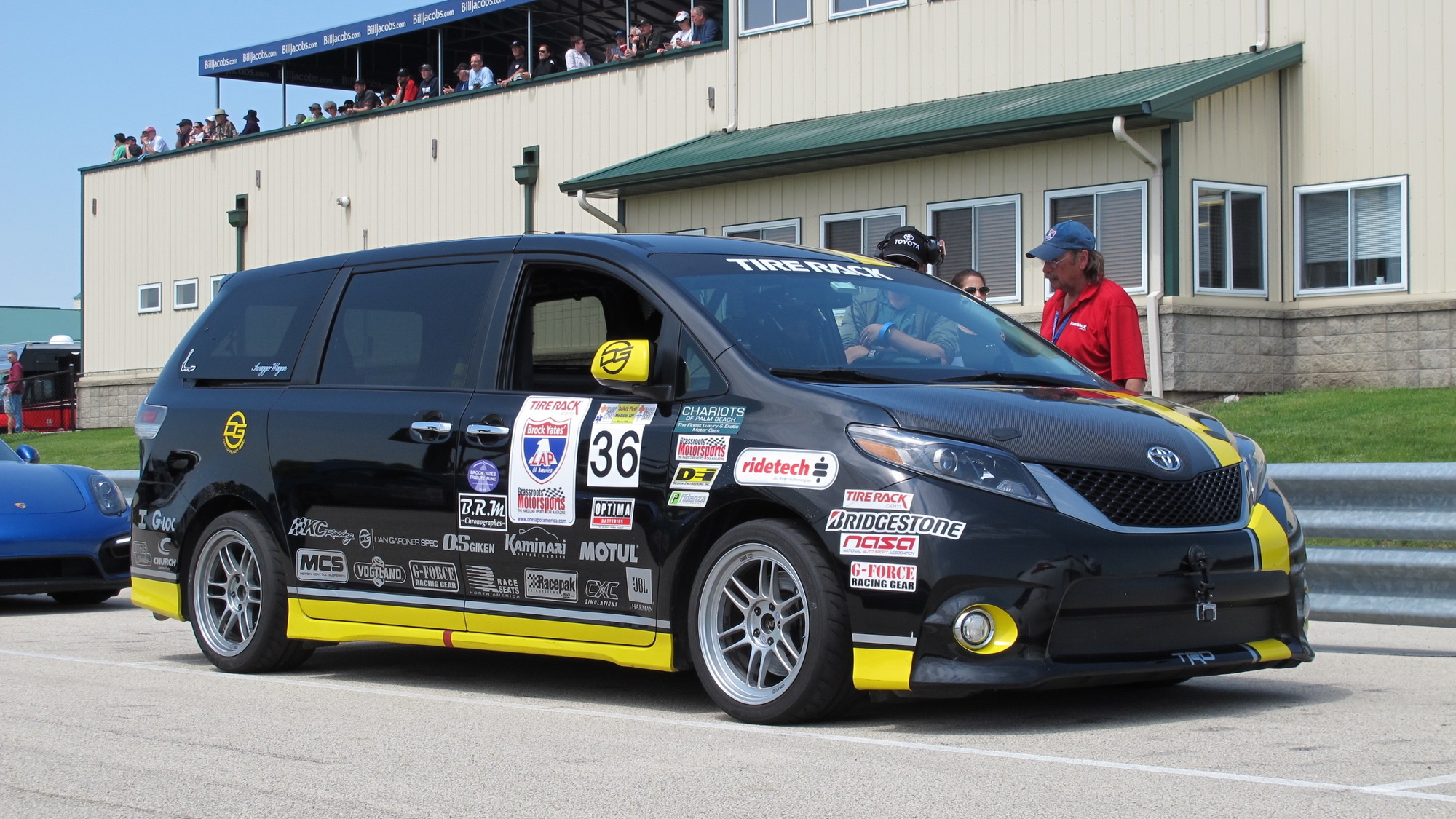 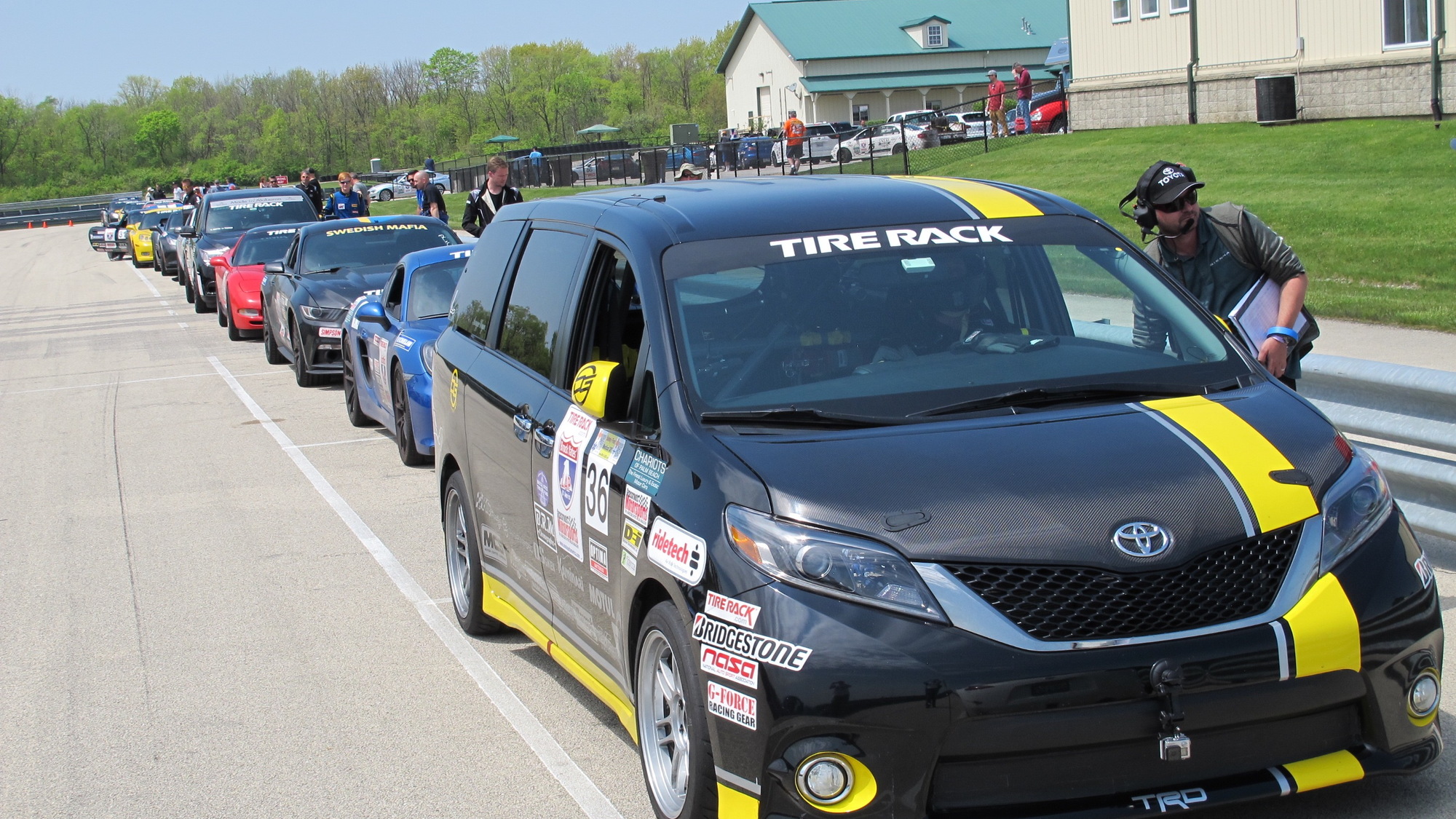 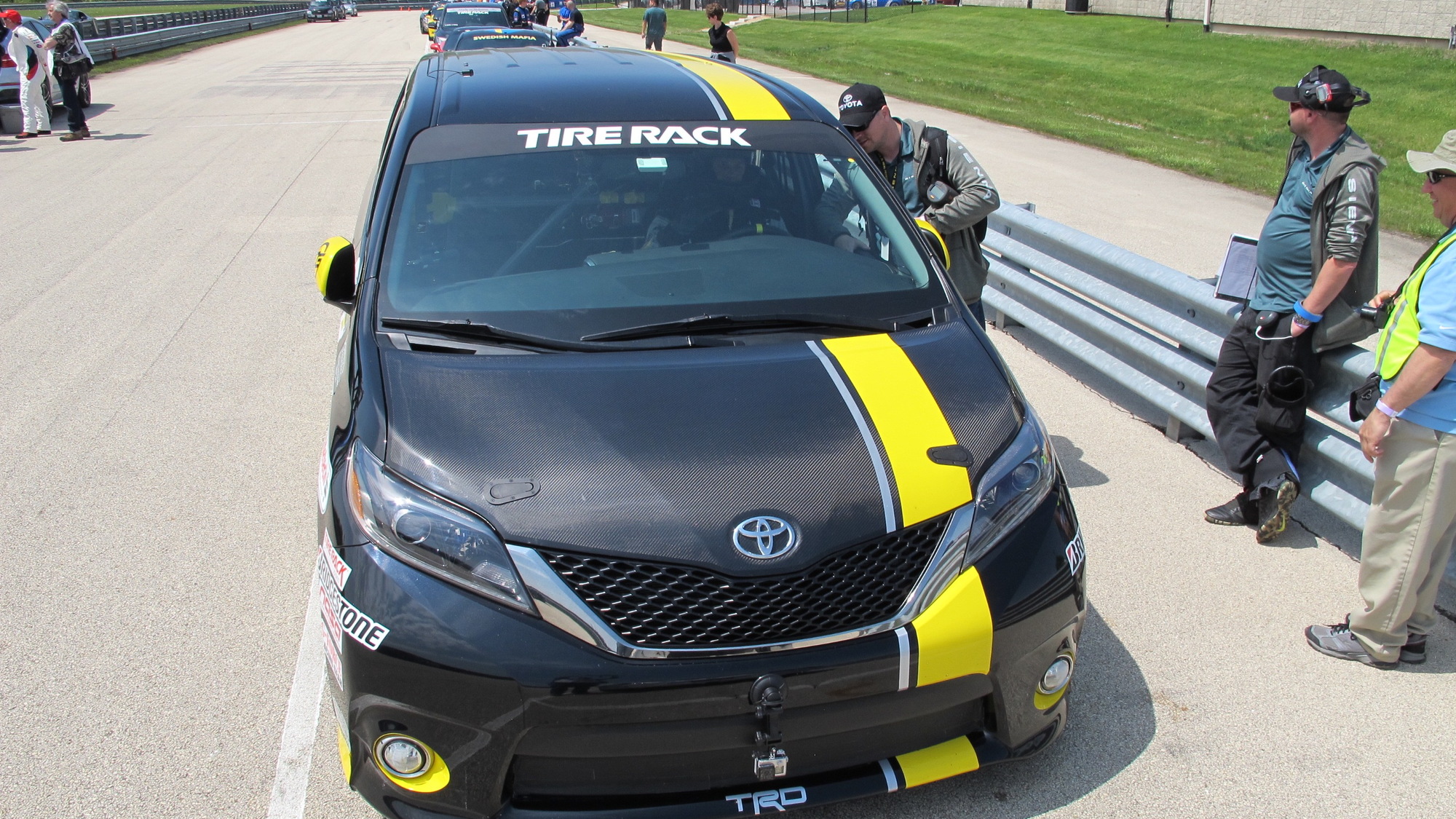 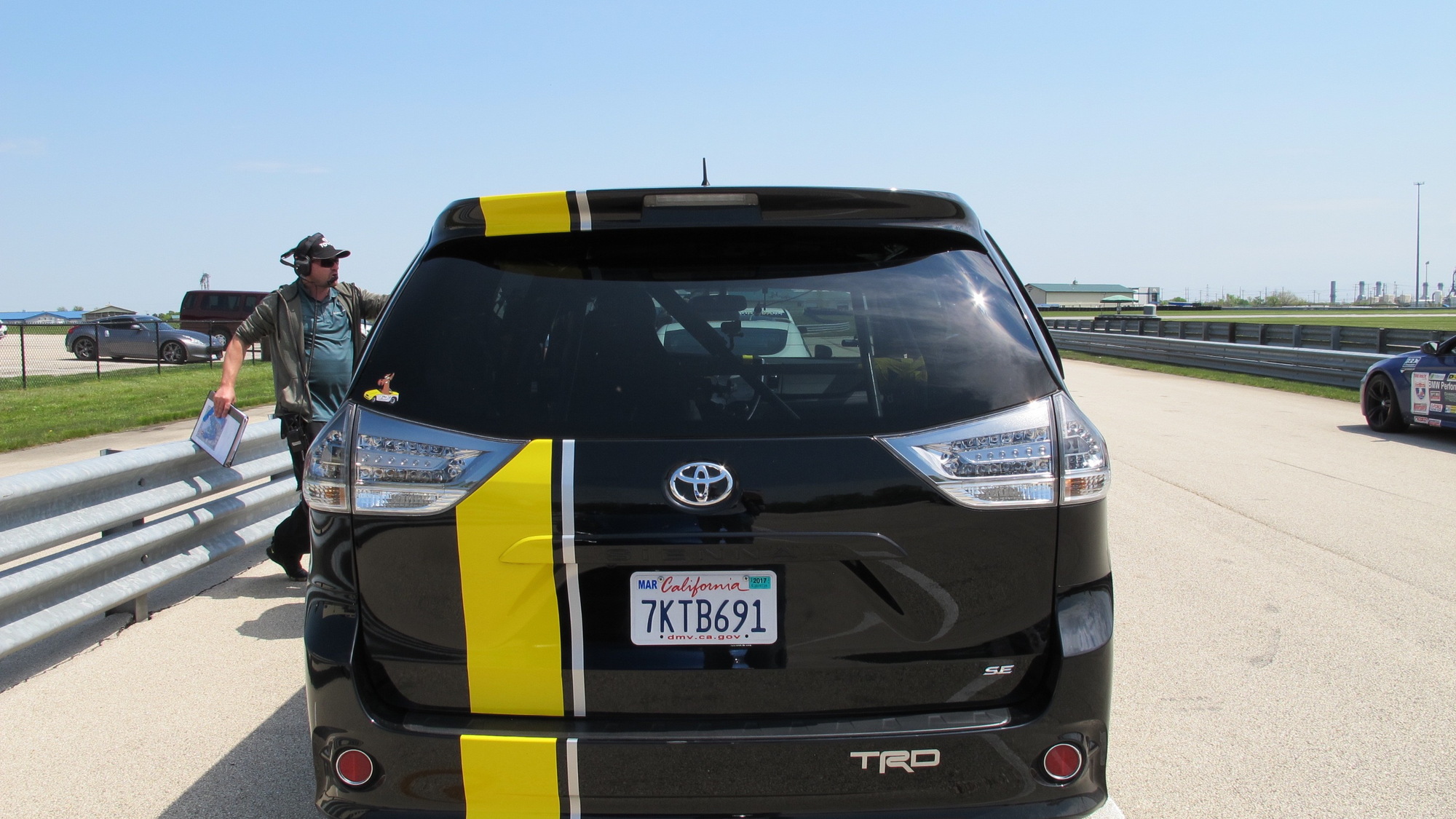 Have you ever considered driving your living room around a racetrack? Toyota would like you to think it's possible, and is why it decided to compete in the One Lap of America with a pair of Sienna minivans.

One Lap concluded this past weekend, and both vans completed the 12-state, 3,500-mile trip that included competitions at eight racetracks from Wisconsin to Massachusetts.

A pair of swagger wagons

Neither of the minivans are bone stock, but they really aren't that far off from what you can buy in a dealer and both use the stock 268-horsepower 3.5-liter V-6 and 6-speed automatic transmission.

The more competitive of the pair is the R-Tuned Sienna, which competed in the Truck/SUV class against just one competitor, an Acura MDX entered by Acura.

A partnership between the Toyota Technical Center (TTC) and performance parts developer DG-Spec, the R-Tuned started as a Sienna SE. TTC and DG-Spec removed all the seats, replacing the driver's seat with a race bucket and adding a four-point roll cage. Power output is up a bit thanks to a cat-back exhaust and a cold-air intake. Suspension updates include double-adjustable coil-over shocks, front camber plates, racing springs, and a limited-slip differential. The brakes are upgraded with G-Loc brake pads (R12s up front, R10s out back) and TRD steel brake lines, and the whole thing rides on Enkei 18x10-inch alloy wheels wearing 275/35 series Bridgestone Potenza RE-71R performance tires. A carbon fiber hood saves weight up front, and, all told, the van is down about 800 pounds. Still at 3,850 pounds, it's not light for a track car.

With American Top Gear host Rutledge Wood and Grand Am Rolex GT champion Craig Stanton at the wheel, the R-Tuned Sienna beat the MDX for the class win, and finished 21st overall out of 69 entries. That put it ahead of cars such as a Porsche Cayman, a Dodge Viper, a Mitsubishi Evo, and several Corvettes. Obviously, that finish was better than most would have expected of a minivan.

The SE+ entry, which was the only Exhibition class vehicle in the One Lap competition, is much closer to stock. All the seats are still in place, and it weighs more than 4,600 pounds. Many of its changes are simply cosmetic. Also based on the SE, it gets revised front and rear bumpers, smoked headlights and taillights, tinted windows, black satin exterior mirrors, a spoiler extension, and blacked out wheels.

What does Toyota get out of this?

Automakers have tried for years to remove the stigma from the minivan. No matter what they do, tough--aggressive designs, "sport" models, marketing terms like "man van' and "swagger wagon"--minivans can't shake the reputation as generic people movers driven by bored housewives. Toyota thinks its involvement in One Lap can help change that perception. Lund says Toyota had three goals in mind while competing in the One Lap of America.

The first goal was to listen to the vehicle. "We are putting it through eight days of driving, long-distance driving, we are driving it on different tracks. The vehicle responds to me: what it likes, what it doesn't like. I'll figure out, if I want to make the vehicle more sporty, where I need to go," Lund said.

Goal number two was to listen to the One Lap competitors. "When we first arrived, they were a little bit skeptical. They seemed to roll their eyes a little bit. And now more people are believing that a van can perform well," said Lund.

The third goal was to change the image of what a van can do. Instead of making these vans faster through sheer force by adding a supercharger or swapping in a V-8 engine, Toyota has taken the opposite approach by using the stock engine and adjusting the suspension, at least in the case of the R-Tuned. "The R-Tuned is an example," said Lund. "If you fine tune the handling of a sport van, it can compete with exotic sports cars."

With its stock suspension, the SE+ also had an advantage over some of the sports cars in the competition. "If you add any element, like rain, all of a sudden it becomes competitive and it starts beating some of those exotic cars," he said.

Lund also summarized the engineering implications of both vans. "By driving this van [the SE+], I'm learning where I am today. By driving the R-Tuned, it tells me where I could go. I need to take that performance feedback and consider all aspects, and figure out where to go," he said.

On track in the SE+

After the SE+ competed in a road course competition at Autobahn Country Club in Joliet, Illinois, last Friday, I got the opportunity to drive it around the 2.1-mile, 15-turn south course. Without the suspension changes of the R-Tuned version, the SE+ handled like, well, a minivan. It dove in turns and understeered like a big fat van when pushed into corners. However, it wasn't so bad that it couldn't be tamed and it got around the track just fine. While the 3.5-liter V-6 offers plenty of power for everyday driving, it didn't have nearly enough to stave off the Viper, 911, and Evo that were almost certainly annoyed by my presence. It made me want to try the R-Tuned version which would certainly be able to carry more speed through turns.

The SE+ is clearly no track toy, but I'm impressed by its ability to withstand the rigors of track duty. Today's cars are pretty robust, even if they are made for family duty. Slapping on some heavy duty brake pads, using high-performance brake fluid, and installing a set of performance tires can give any vehicle some genuine track capability...even if it's a minivan that does a pretty good impression of your living room.