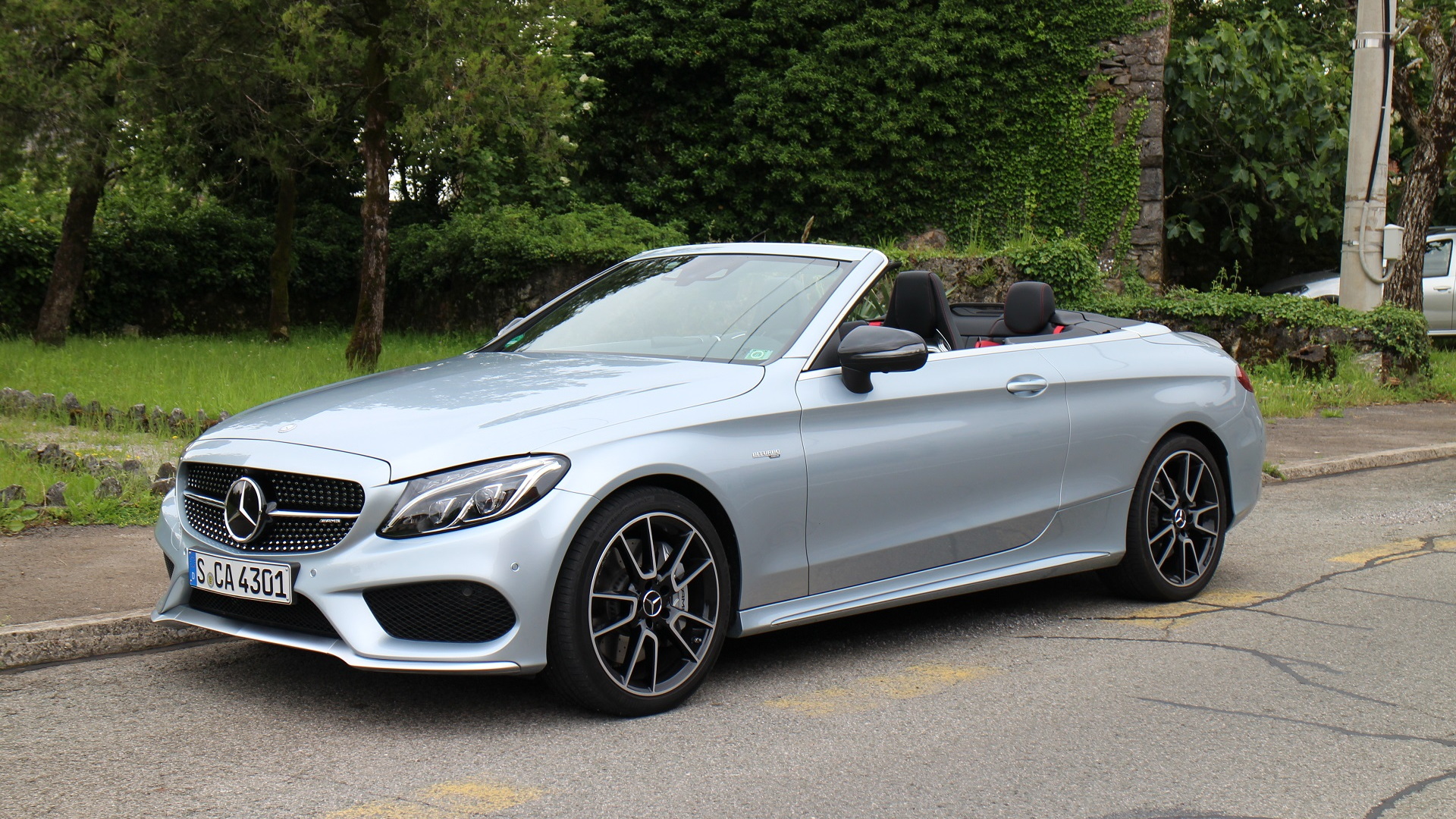 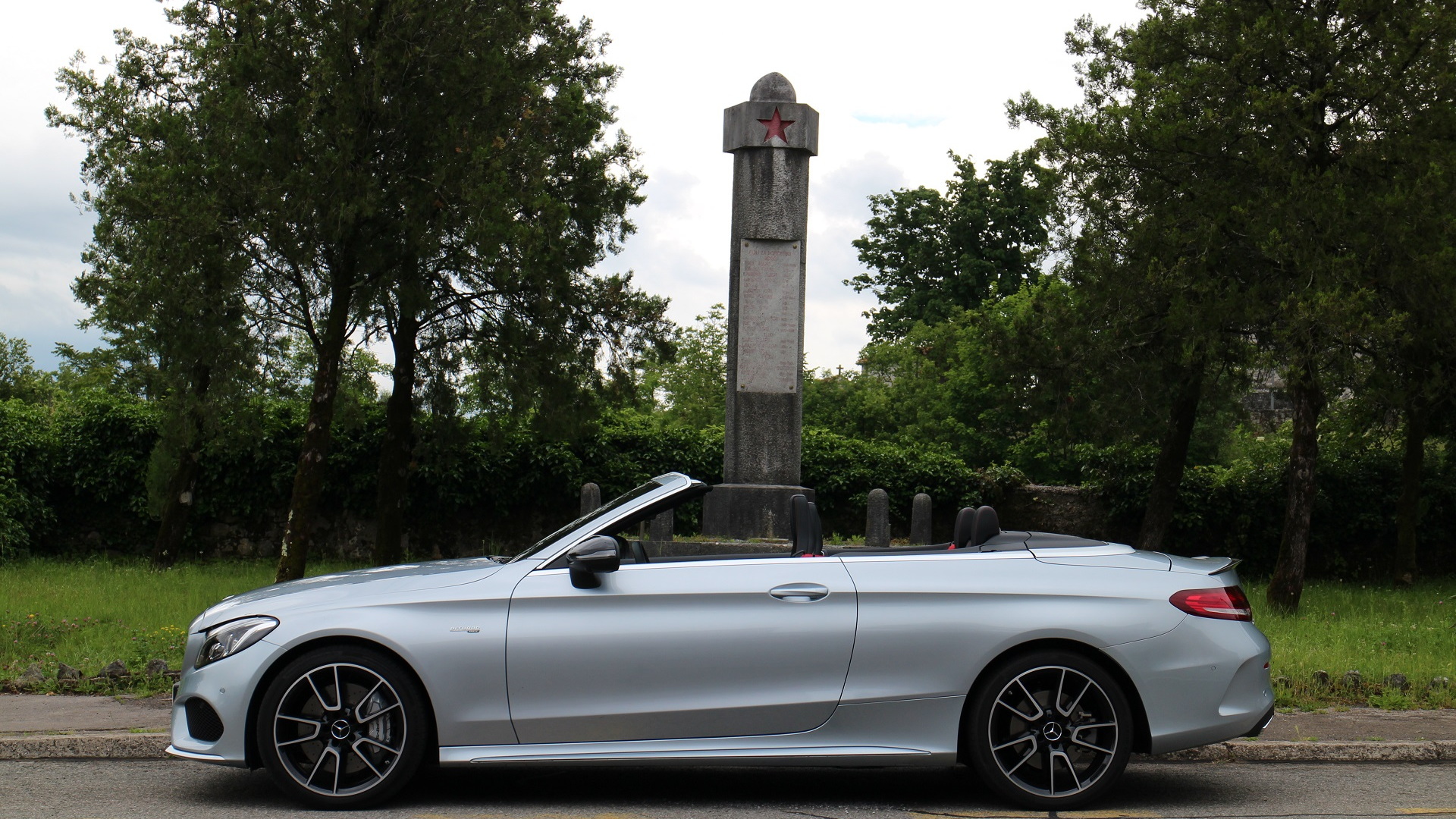 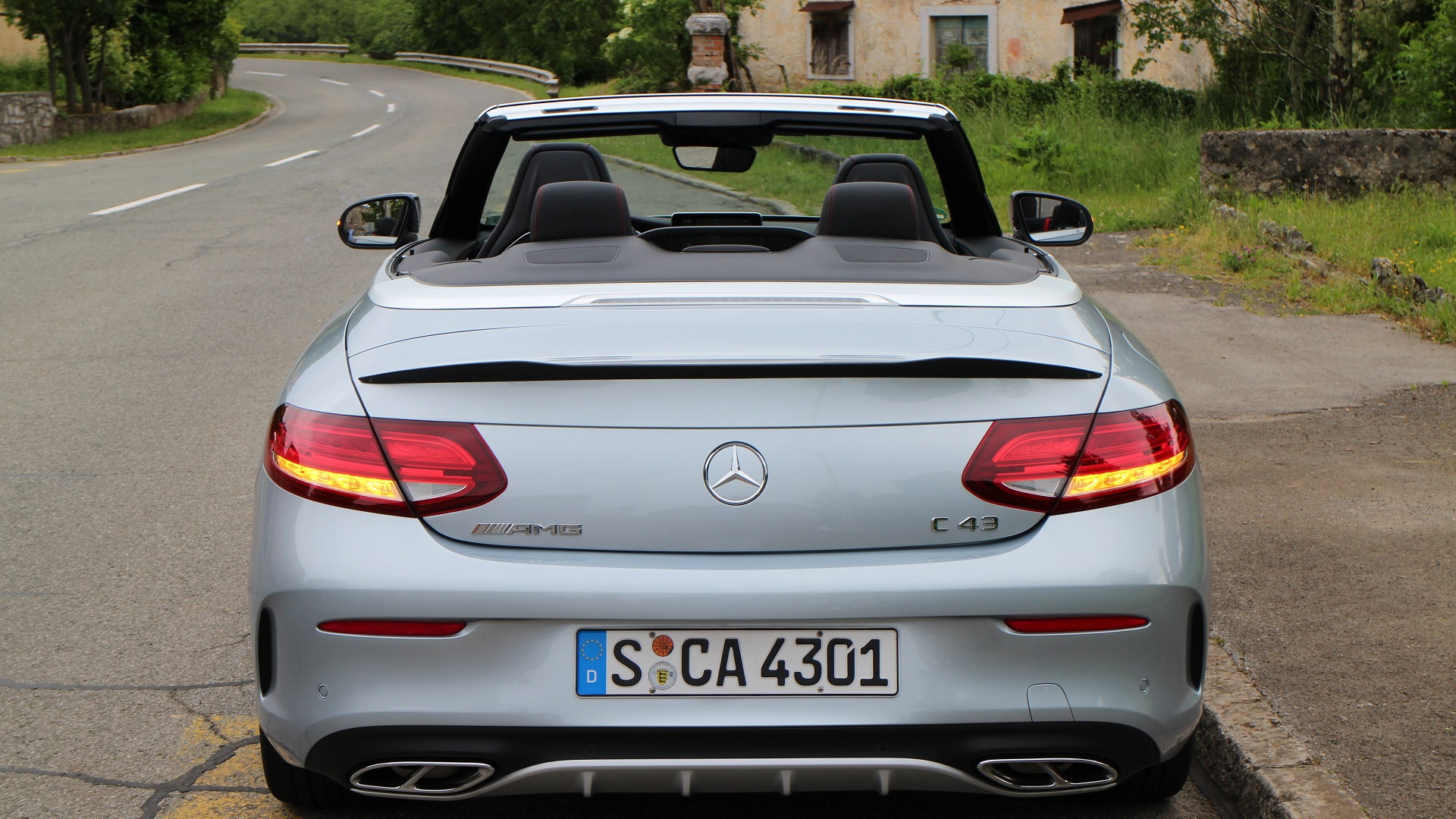 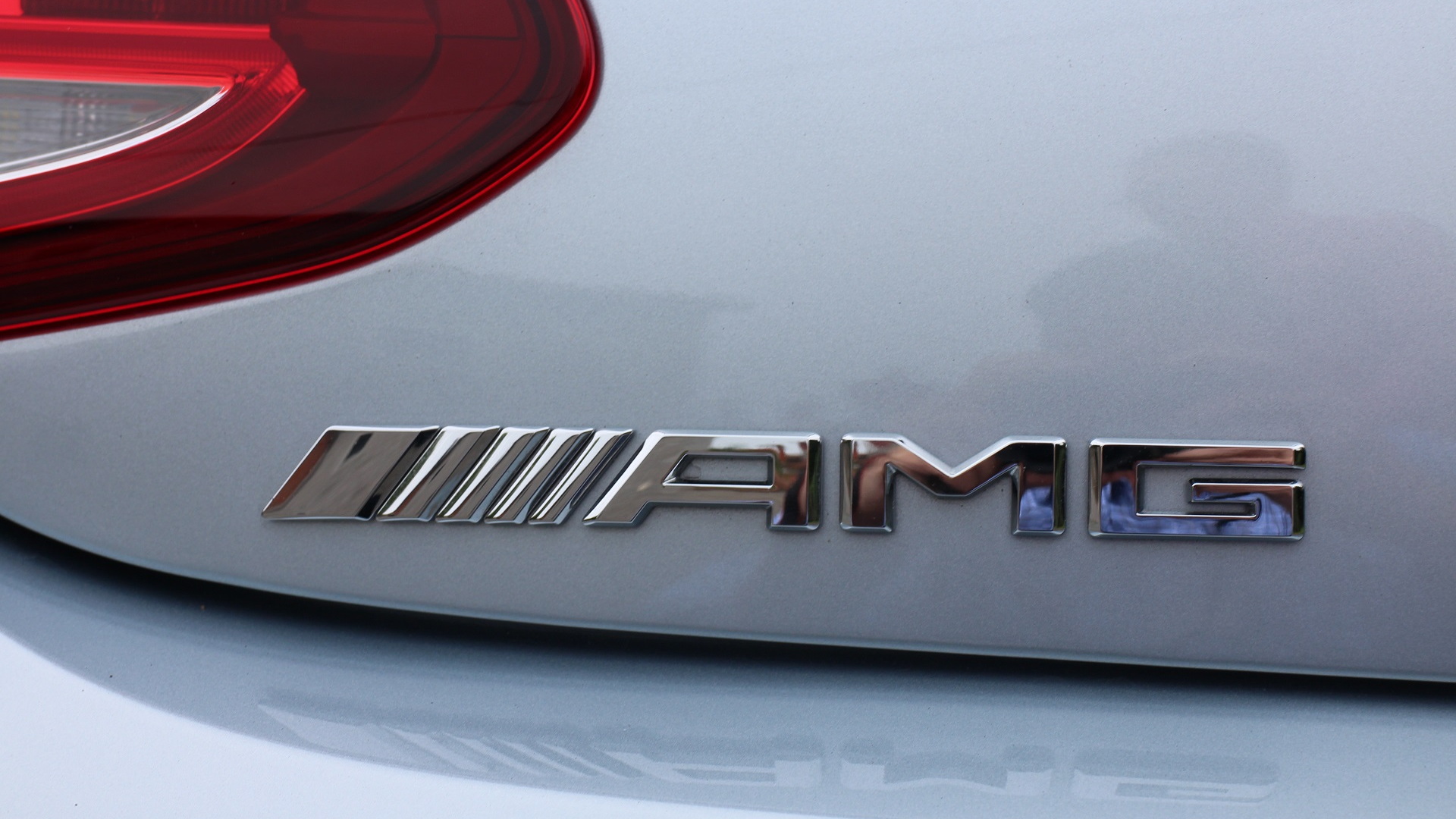 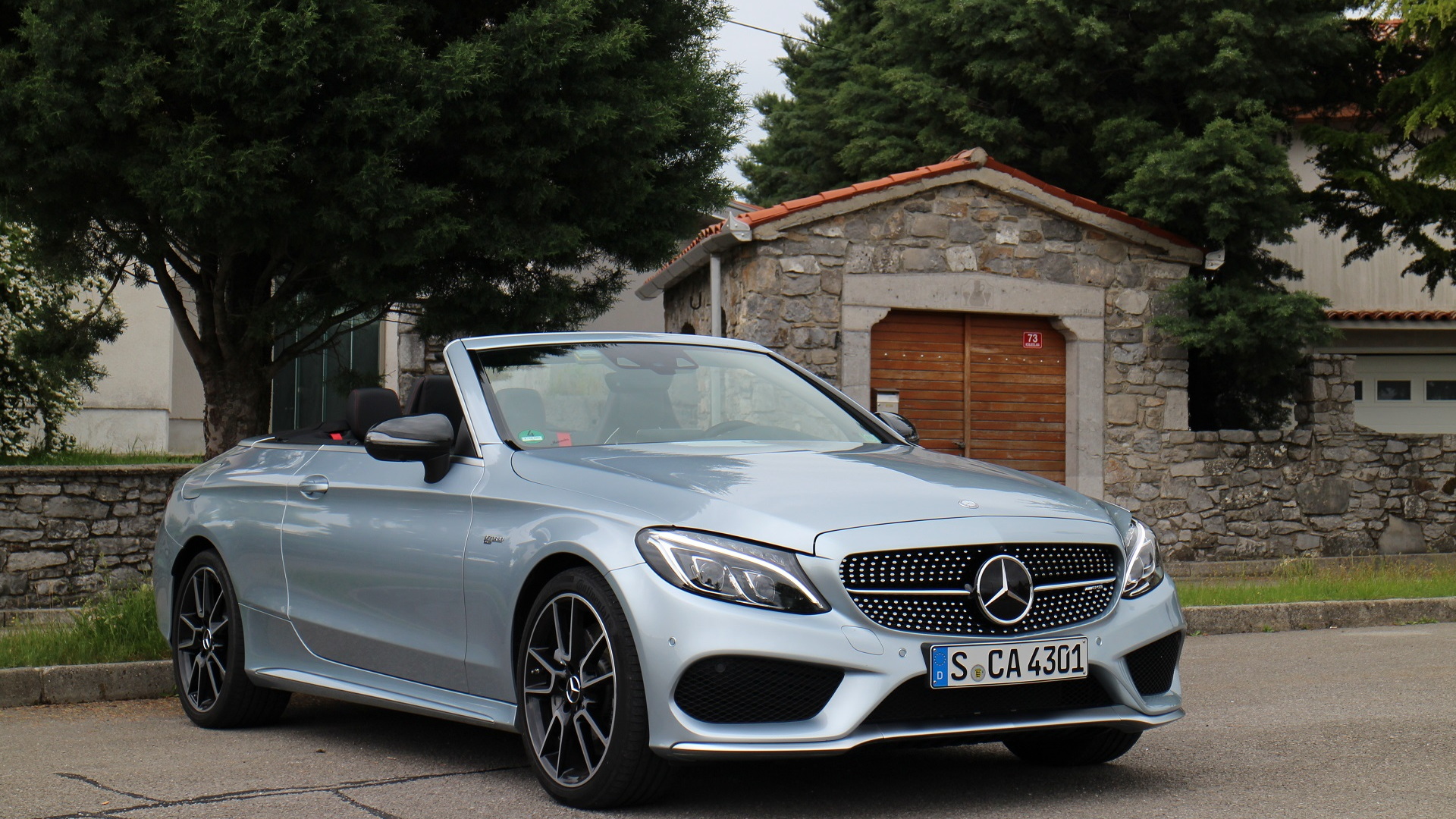 With the arrival of the small CLA sedan three years ago as its entry vehicle, Mercedes-Benz has moved the latest version of its C-Class range up in size, style, and features.

Now the C-Class Cabrio soft-top convertible has been unveiled as the last of the four C-Class variants, following the C-Class sedan and coupe that are already on sale. (The fourth is a C-Class wagon, which sadly won’t be sold in North America.)

We spent parts of two days driving a variety of European-spec C-Class Cabrio models along the Adriatic Sea coast, from Trieste into Slovenia and back. We spent the most time in the new C43 model, which may offer the best balance of performance and tractability in the lineup.

The Cabrio range, as you might expect, is broadly similar to that of the coupe it’s derived from—and it offers the same three engine options to North American buyers. The standard Mercedes-Benz C 300 Cabrio is powered by a 241-horspower turbocharged 2.0-liter 4-cylinder engine that puts out 273 lb-ft of torque, paired to a 9-speed automatic transmission with paddle shifters. Rear-wheel drive is standard, and 4Matic all-wheel drive can be added as an option.

The middle of the three-car Cabrio range is the Mercedes-AMG C43, the lower of two AMG performance variants. Its 3.0-liter twin-turbo V-6 is rated at 362 hp and 384 lb-ft, with the 9-speed automatic and all-wheel drive as standard. It gets a number of the AMG design add-ons, though not as many as the C63.

At the top of the range are the Mercedes-AMG C63 and C63S, whose 4.0-liter twin-turbo V-8 engines put out 469 or 503 hp and 479 or 516 lb-ft respectively. This year, the C63 comes with a 7-speed automatic and rear-wheel drive, though a beefier version of the 9-speed plus all-wheel drive will be swapped in eventually.

The Cabrio offers a handful of features unique to the drop-top version of the elegant Coupe shape. The power-operated soft top stows below a rear-hinged panel in front of the trunk lid that opens before the top opens, all of it controlled by a button on the console. Mercedes says the top is based on the same design as that of the pricier S-Class Cabrio, and can be raised or lowered at road speeds up to 30 miles per hour (a capability we didn’t test). The entire top-raising or lowering process takes 21 seconds.

The switch to open or close the top is flanked by two other Cabrio-specific buttons, one of which raises or lowers all four windows at once. The other activates an optional AirCap heating system that cuts turbulence in the passenger compartment by routing airflow over the heads of occupants.

That’s accomplished with a sort of wing that rises from the windshield header bar, like an automatic trunk spoiler, when the button is pushed. It’s paired with a mesh wind-blocking screen that rises from behind the rear seat. AirScarf neck-level heating is standard on all C-Class Cabrios, and automatic belt extenders present the shoulder strap to front-seat occupants when they close the doors.

The combination of the raised metal panel on its struts and a large vertical mesh screen behind the passengers isn’t particularly elegant from the outside, but the Aircap system works quite well. Buffeting is non-existent, and wind noise is lower than in other similarly sized convertibles we’ve driven.

Mercedes designed the coupe and cabrio models together, but the mass saved by eliminating a metal roof is outweighed by structural reinforcements and the various motors and struts that operate the soft top, the panel that covers it when open, and the various elements of the Airscarf system. That makes the Cabrio lineup among the heaviest C-Classes, from 3,840 for the C 300 to 4,310 pounds for the hot-rod C63S.

All versions of the Cabrio ride 0.6 inch lower than the sedan, but on the road, the three engines give the three models quite distinct personalities. The C 300 Cabrio is the generic version, a fine car for many buyers who don’t feel the need for the image, the delightful exhaust notes, or the sheer performance of either AMG variant. We’ve driven the C 300 sedan, which has perfectly useful performance, and so does the C 300 Cabrio.

Unfortunately for the C 300, we started our driving in the C43 model, lured in by its slightly raspy exhaust note echoing in the courtyard of our harborside hotel. The C63 has an even better note, a sort of rumbling gurgle, but we’d pick the C43 for daily use due to its tractability and less explosive power.

On the road, the C43’s sport suspension makes the car feel tauter and more direct than the C 300. All models offer Comfort, Sport, and Sport+ modes, with the AMG C63 adding a Track setting as well. We were able to leave our C43 in Sport or Spot+ for the whole drive without making the ride too harsh. That said, the roads and country lanes around Trieste were relatively well-surfaced, and Comfort mode may be required for rougher surfaces or particularly lumpy pavement.

The C43 proved easy to place, though we tended to use an excess of caution through tiny Slovenian villages where narrow two-lane roads suddenly narrowed to a single lane between two buildings. For the U.S., the C-Class is a “small” Mercedes; in Europe, it’s still a large car.

In the twisting hilly roads among vineyards and villages, the C43 was rewarding to fling around and supremely easy to place. The steering provided good feedback and even over a handful of sudden humps, the entry-AMG cabrio in Sport mode never floated—unlike the Comfort mode at highway speeds, which occasionally felt a little mushy over similar rises and dips.

C63S: more capability than we could test

The weather for our first driving day, in the C43 Cabrio, was perfect for a soft-top, with overcast skies occasionally giving way to sunshine. During our C63S drive on the second day, the climate was not so cooperative. Occasional bursts of rain left roads slick, with occasional small streams of water draining across the country roads.

In that environment, with 500 horsepower on tap, the C63S clearly had more capability than it was safe to test—especially in another set of small villages set in rolling hills. Add to that the utter lack of road shoulders in the Slovenian areas, and we confined ourselves to a few quick bursts of speed where visibility and drier roads permitted.

Our C63S was fitted with carbon-ceramic brake calipers and the largest drilled front discs we’ve seen on a production car; suffice it to say the brakes were far more than capable of stopping the car under any circumstances we encountered. Despite numerous warning signs, we didn’t meet any livestock crossing the roads, but we did encounter a couple of cheerfully aggressive commercial drivers flogging their battered white vans to the absolute limit.

On tight hairpin turns, the C63S’s limited-slip differential was obvious, with the slight lurching and skipping required when the outer wheel rotates far more than the inner one. Full acceleration out of corners engaged the traction and stability control systems, which allowed only a hint of stepping out at the rear before keeping things safely under control. Given the wet conditions, we didn’t even think about disengaging the traction control.

What we did want, however, was to test the C63S on a track—but sadly, that wasn’t a part of the drive event. And, to be fair, the coupe or sedan version makes far more sense for that application. We suspect the few buyers of C63 Cabrios may be opting for the image more than the out-and-out performance capabilities.

It had been about a year since we’d been in a current C-Class; our time in the new Cabrio only reinforced the favorable impressions we’d had from the sedan.

We prefer the lines of the coupe to those of the convertible. The Cabio’s high central rear cowl and twin opening panels at the rear can appear awkward from a few angles, whereas the coupe has a prettier and simpler roofline—on display in a pair of striking red C43 coupes at one stopping point along the drive.

We’d forgotten how wide the C-Class central tunnel is, a necessity for a body structure that handles powerplants from turbocharged 4-cylinder diesels and petrol engines all the way up to twin-turbo V-8s—not to mention 7- and 9-speed automatic transmissions and all-wheel-drive components.

The AMG power sport seats with adjustable lumbar supports are supremely comfortable. What felt like over-bolstering at first turned into the perfect support after a number of hours on the road.

All C-Class Cabrios for the U.S. come with 18-inch alloy wheels, heated power adjustable front seats, the standard C-Class 7-inch touchscreen display that stands proud of the dash, and a package of electronic safety systems that includes blind-spot warning, a rearview camera, and automatic crash braking. LED headlamps and taillamps are standard as well.

As well as its turbocharged V-6 engine and standard all-wheel drive, the C43 adds sport suspension, different tuning for its 9-speed automatic transmission, and a three-stage electronic stability control system.

At the top of the range, the hot-rod C63 uses the twin-turbo V-8 with 7-speed automatic, and a mechanical limited-slip differential. The C63S switches to an electronic limited-slip differential, and adds dynamic suspension control and 19-inch alloy wheels with even lower-profile tires. The C63 twins can be distinguished from lesser models by their twin bars either side of the large central Mercedes star emblem in the center of the grille.

Options include a Burmester premium audio system, a navigation system with a larger 8.4-inch touchscreen display, adaptive cruise control, active blind-spot and lane-keeping assist systems, and air suspension on the C 300 only. Other available features include ventilated front seats, a 360-degree camera view with active parking assist, a head-up display, and a variety of AMG performance and appearance options.

The C-Class Cabrio offers an enormous number of options to customize the equipment and colors. Mercedes says it offers 12 paints, including a matte finish, 13 types of upholstery, seven trim levels, and trim elements in aluminum, carbon fiber, or silver fiberglass along with black or brown open-pore wood.

The power-operated soft top comes standard in black, but can also be ordered in dark hues of red, blue, or brown. Three soft-top liner colors are offered as well. The whole array lets buyers create color combinations that range from elegant to what you might call startlingly distinctive.

All versions of the 2017 Mercedes-Benz and Mercedes-AMG C-Class Cabrio will arrive at dealers during the fall of 2016. Pricing and final features and options will be released closer to the on-sale date.