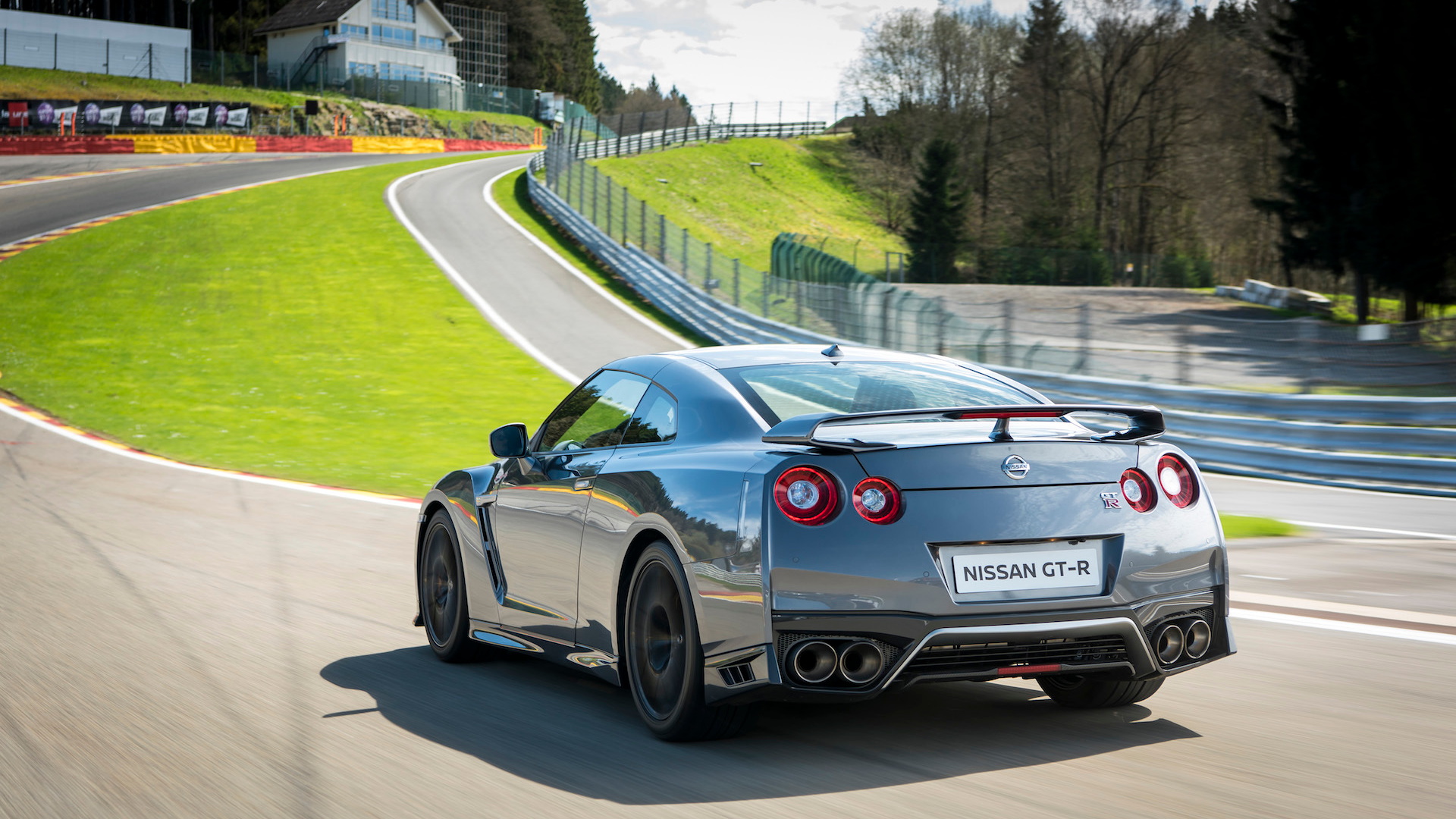 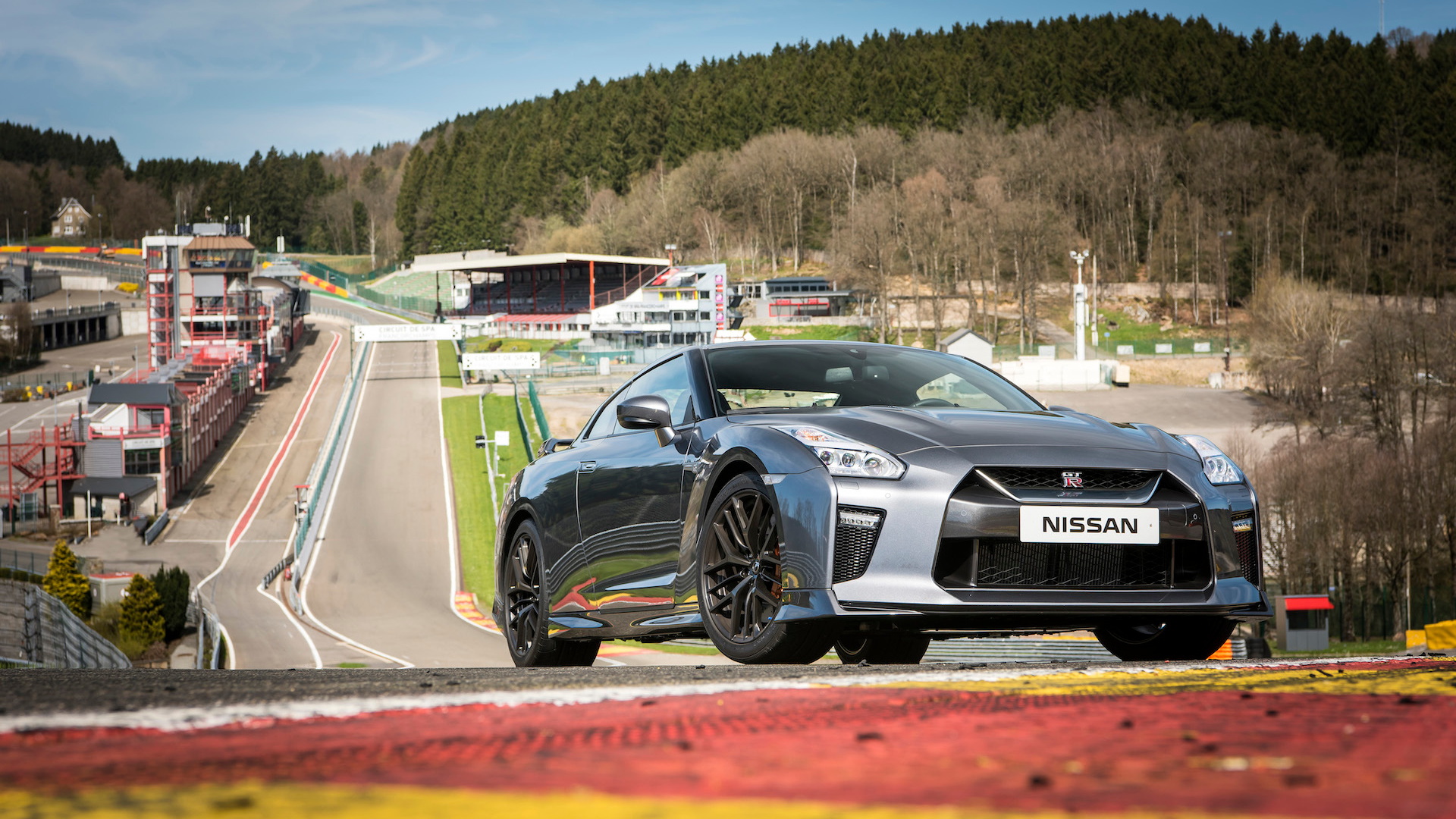 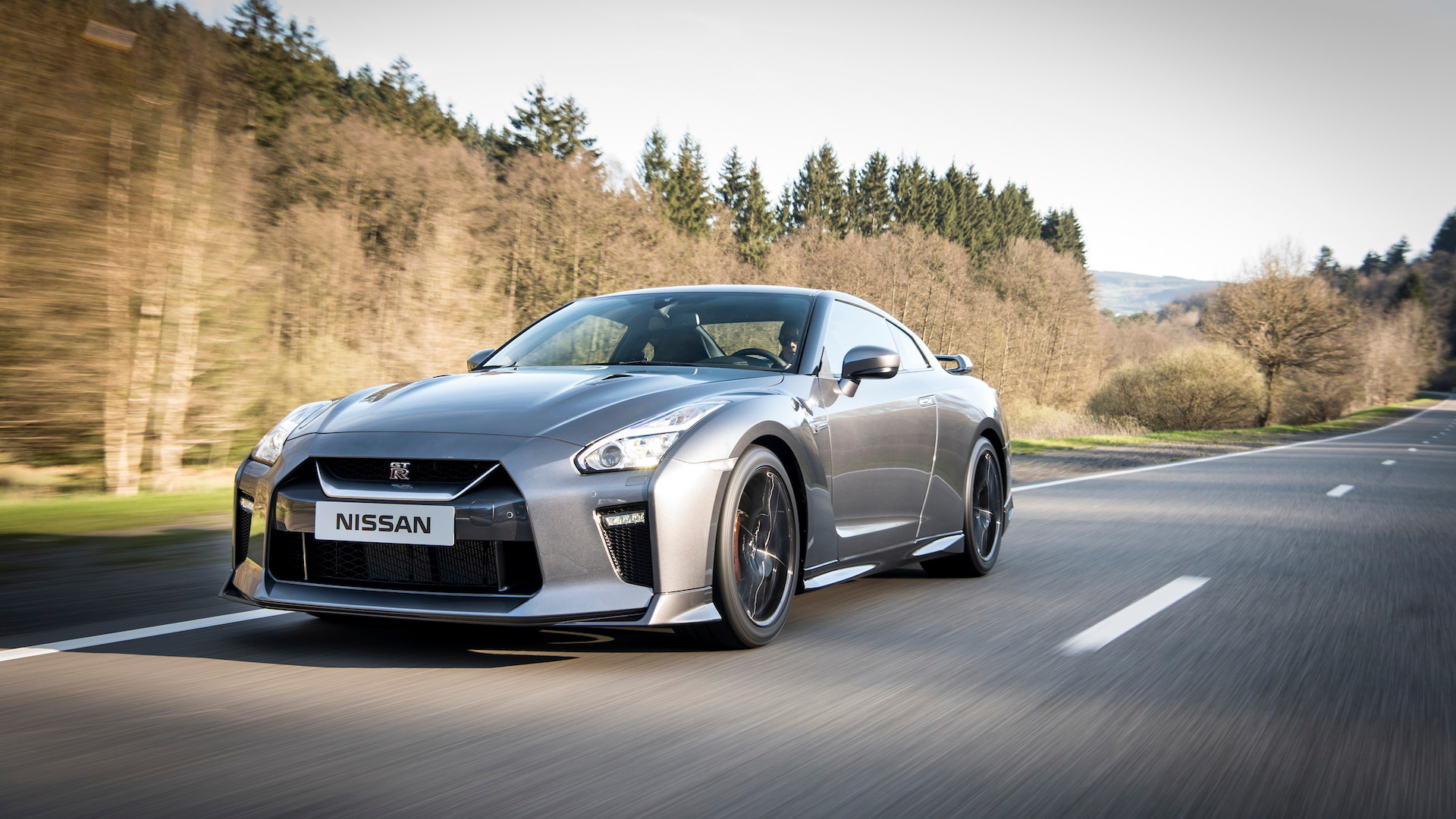 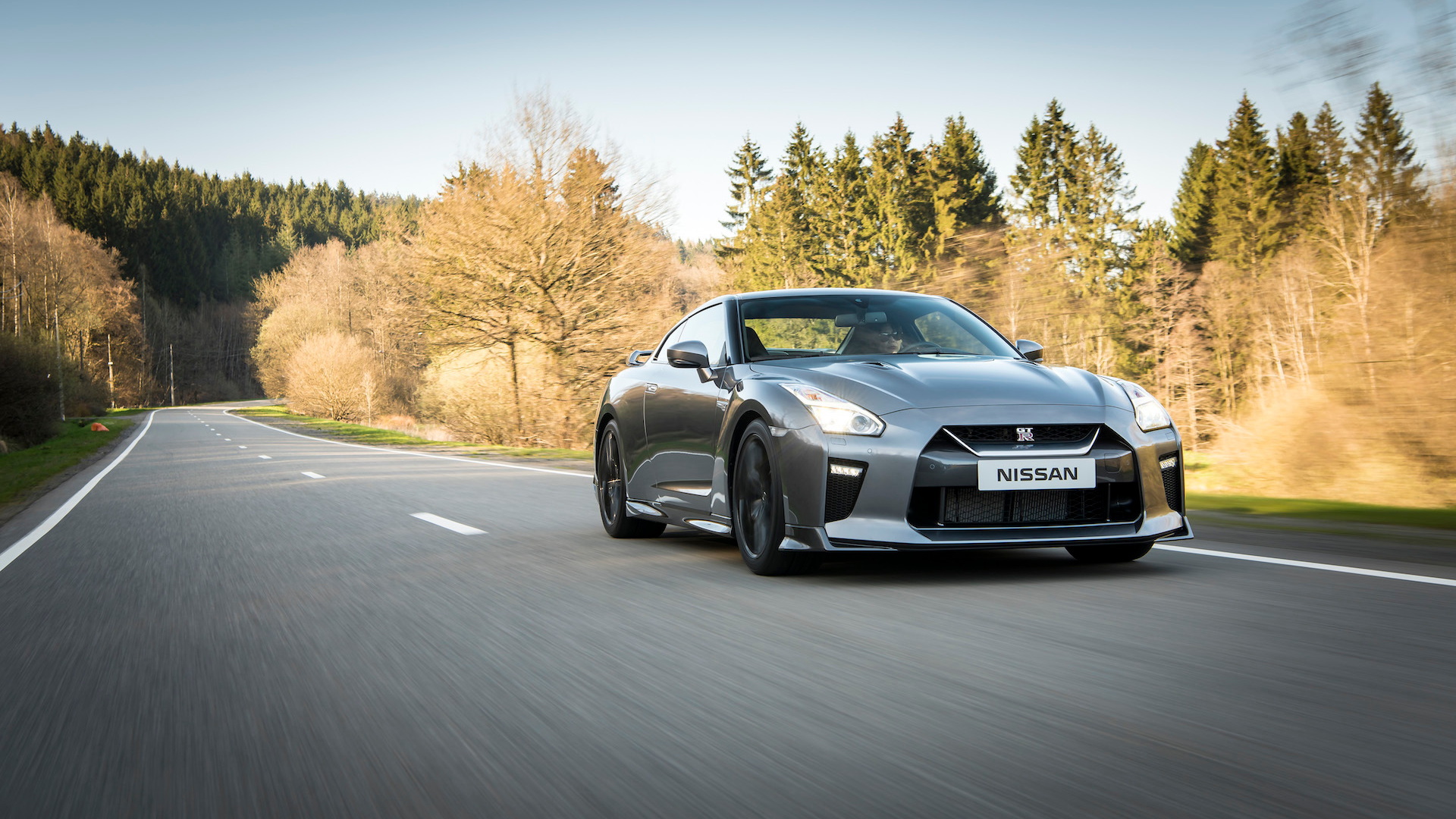 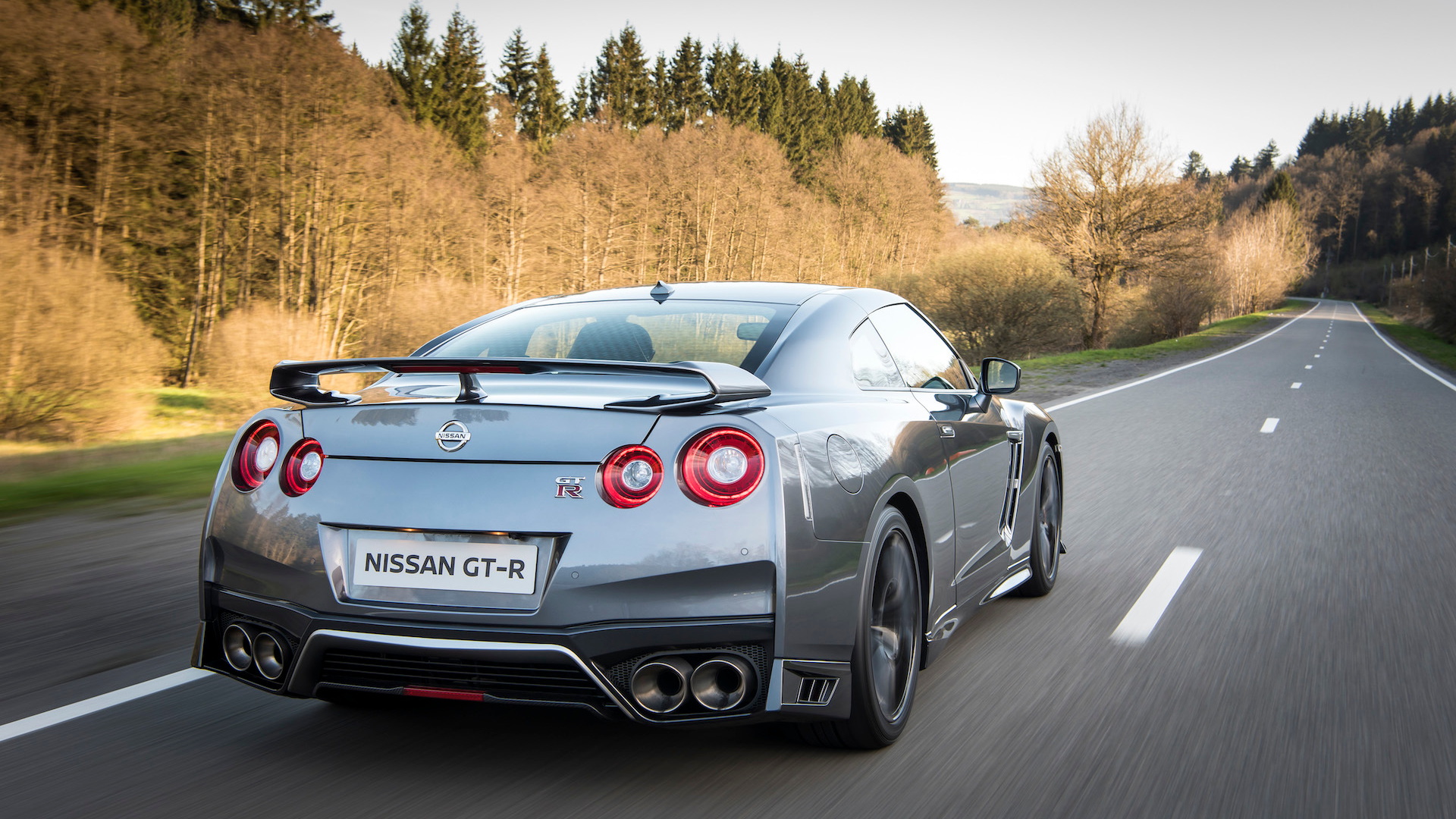 I’ve just snaked through legendary Eau Rouge and Raidillon S-turns at Circuit de Spa-Francorchamps, careful not to drive over the rumble strips because, in the rain, their paint has a different traction coefficient than the asphalt and that could send the 565-horsepower 2017 Nissan GT-R off into the trees. At the urging of my instructor, I put my right foot to the floor a little earlier than I wanted to as I approached the Kemmel Straight. The speedometer keeps climbing: 200 kph, 210, 220. And now it’s time to brake hard for the right-left-right combination of Les Combes at 230 kph. That’s 143 mph to us Americans. I absolutely have to brake in a straight line here or, again, it’s off into the trees. Formula 1 drivers can enter this turn at more than 200 mph in the rain, but I’m no F1 driver and this is both terrifying and intoxicating.

Let’s back up a bit. How did I get here? What did I do to deserve such bounty? And who invented liquid soap and why?

To show off the performance and improved refinement of the 2017 GT-R, Nissan invited Motor Authority to Belgium by way of Germany to drive the car on the autobahn, through quaint European villages, and on one of the world’s most storied racetracks: Spa.

The GT-R, affectionately known as Godzilla, has been my white whale. It’s a car I’ve always wanted to drive and drive hard, but it’s eluded me. I’d heard the performance was phenomenal, but the car had a digital feel that took away some of the fun for the driver. I’d also heard that it was raw and harsh, and the interior was rather cheap.

Nissan is aiming to change that latter perception for the 2017 model year by taking Godzilla to charm school, with improved interior materials, a quieter cabin, and even some dynamic refinements.

The most obvious changes are the interior updates. Soft-touch Nappa leather now adorns most of the interior touch points. An 8-inch center screen replaces a 7-inch screen, Nissan adds a Display Commander dial on the center console to control the functions on that screen, and the button count is down from 27 to 11.

An acoustic glass windshield, a dashboard insulator, rear fender insulators, and improved sound deadener behind the instrument panel work with the carry-over Bose active noise cancellation system to limit interior noise, and owners can press a button to activate a valve in the exhaust system to reduce engine noise by 10 decibels upon startup. The seats are also revised for greater comfort.

The refinements don’t end with the interior. The adjustable Bilstein DampTronic shocks have been tweaked to be slightly softer, the 6-speed dual-clutch gearbox has been adjusted to deliver smoother shifts, and the steering has been revised to reduce the number of small corrections needed at speed.

If GT-R stands for Grand Touring-Race, it's obvious that Nissan concentrated on the GT portion this time around, but it also added a little R. A new design for the A-pillars strengthens the front end and a revised trunk structure stiffens the rear. More importantly, the front and rear are now closer in bending stiffness, giving the car a more uniform, balanced structure.

Changes to the body improve cooling and aerodynamics. The new Nissan V-Motion grille lets in more air without creating additional drag, a stronger hood is less prone to deforming at speed, revised side sills reduce lift by channeling air around the body instead of under it, and the rear bumper takes on the shape used by the 2015 Nismo model for better airflow.

Under the sturdier hood lies the same VR38DETT V-6 engine as before. It’s a 3.8-liter V-6 force fed as much air as it can handle by a pair of turbochargers. This year additional boost pressure and an ignition timing system that controls timing at each cylinder (also from the outgoing Nismo model) add 20 horsepower and four pound-feet of torque. That brings the totals to 565 hp at 6,800 rpm and 467 lb-ft from 3,300 to 5,800 rpm, and Nissan says mid-range response (over 3,200 rpm) is improved.

This all enhances a car that already had some impressive hardware. The front-mounted 3.8 sends its power to a rear transaxle that, in turn, funnels it through Nissan’s sophisticated ATTESA E-TS all-wheel drive system to all four wheels. ATTESA defaults to a 0/100 front/rear torque split, but it can send up to 50 percent of the grunt to the front when needed.

Together, all these changes make the GT-R a much more livable supercar. The cabin is a reasonably comfortable place to spend your commute. For the most part, the materials are Infiniti quality, including the leather and the carbon fiber center console, though the Display Commander dial and some of the buttons are made of light plastics that show this car is still a Nissan at heart. The Display Commander dial is also offset toward the driver, so much so that I accidentally brushed it with my right arm on occasion, triggering random functions.

Ride quality is certainly firm, but it doesn’t try to beat you up. On the road, I tended to stick with the available Comfort setting, which maintained the car's crisp handling while helping the GT-R smooth out minor bumps, though it couldn’t calm the ride on European cobblestone.

The revised steering delivers stable, comfortable cruising on the highway, but the wide tires (255/40R20s up front, 285/35R20s out back) can occasionally follow seams in the road, and fans of the race-car-quick steering of the past may be disappointed by the less responsive, but still sharp steering.

The 3.8-liter V-6 starts with a whir and hiss then resolves into a low rumble and a hint of turbocharger whine. The sound doesn’t delight like a growling V-8 or a high-strung V-12, but also doesn’t intrude on conversation. There are no clicks and lashing sounds from under the hood, and rear tire noise is nicely filtered.

On the road, power is easily metered by your right foot. Go easy on the throttle and the GT-R acts quite civilized, shifting smoothly and dawdling along with traffic. If you neglect to exercise this car, it almost seems like Godzilla has gone soft. Put the hammer down, though, and the 565 horses team with the AWD system to put the power down as efficiently as physically possible. Zero to 60 mph arrives in less than three seconds, and the 3.8 keeps pushing all the way up to a drag-limited 195 mph.

The GT-R’s track beast is just as easily unleashed. Flip the toggles for the transmission, shocks, and stability control into the R mode, point the car on a path, and it eats up tarmac with the hunger of a giant Japanese monster. The tires bear hug the pavement, the 6-speed dual-clutch transmission provides right-now shifts, the front end turns in with verve, and the car stays flat through corners.

Meanwhile, back at Spa

And that takes us back to turn 7 at Spa: Les Combes. If you are going to get rain on a track day, there are few, if any, cars better than the GT-R, thanks to its smart all-wheel-drive system.

Even in the rain, the GT-R's big, honkin’ Brembos (15.35-inch two-piece rotors with 6-piston calipers up front and 15-inch two-piece plates with 4-piston calipers out back) scrub away the speed confidently, and the car’s aerodynamics and inherent balance (53 percent front/47 percent rear weight distribution) keep it straight and steady both at speed and during hard braking. That's important stuff when you are scrubbing off momentum from 143 mph in the wet on an unfamiliar track.

The balance is evident in Spa’s Les Combes turns, and later in the Luxelles carousel and the Pouhon double-apex left-hander. This car reacts according to the way you drive it. Push it too hard into the carousel, especially in the wet, and the front end of this 3,862-pound monster wants to wash out. Slow it down enough, though, and the front end tucks in and the car rotates nicely, without the aid of a torque vectoring system.

The AWD system tries to stay out of the way, too, only helping when needed. Power is sent almost exclusively to the rear wheels in turns, with torque only going to the fronts when the car steps sideways or when you kick the hammer down to take advantage of the full wind turbine effect of those turbos. Few cars on Earth can accelerate in the wet like the GT-R, and the others that can cost tens or hundreds of thousands of dollars more.

After a couple hundred miles through the German and Belgian countryside, and 10 laps around Spa, I’ve learned that today’s Godzilla is somewhat domesticated. The GT-R is now a car that balances true track capability with a livable, if not quite relaxed, street demeanor. The interior is now far from cheap, befitting the car's $111,585 price tag. Performance truly is phenomenal, and those bits of digital feel are just fine for this analog kid.

I waited years to get behind the wheel of the GT-R, but if the reward was this latest model on the track at Spa, it was worth the wait.

These driving impressions are from an invitation-only automaker launch event that allowed special access to the vehicle, the racetrack, and executives. Nissan covered our overnight accommodations, meals, and transportation costs.