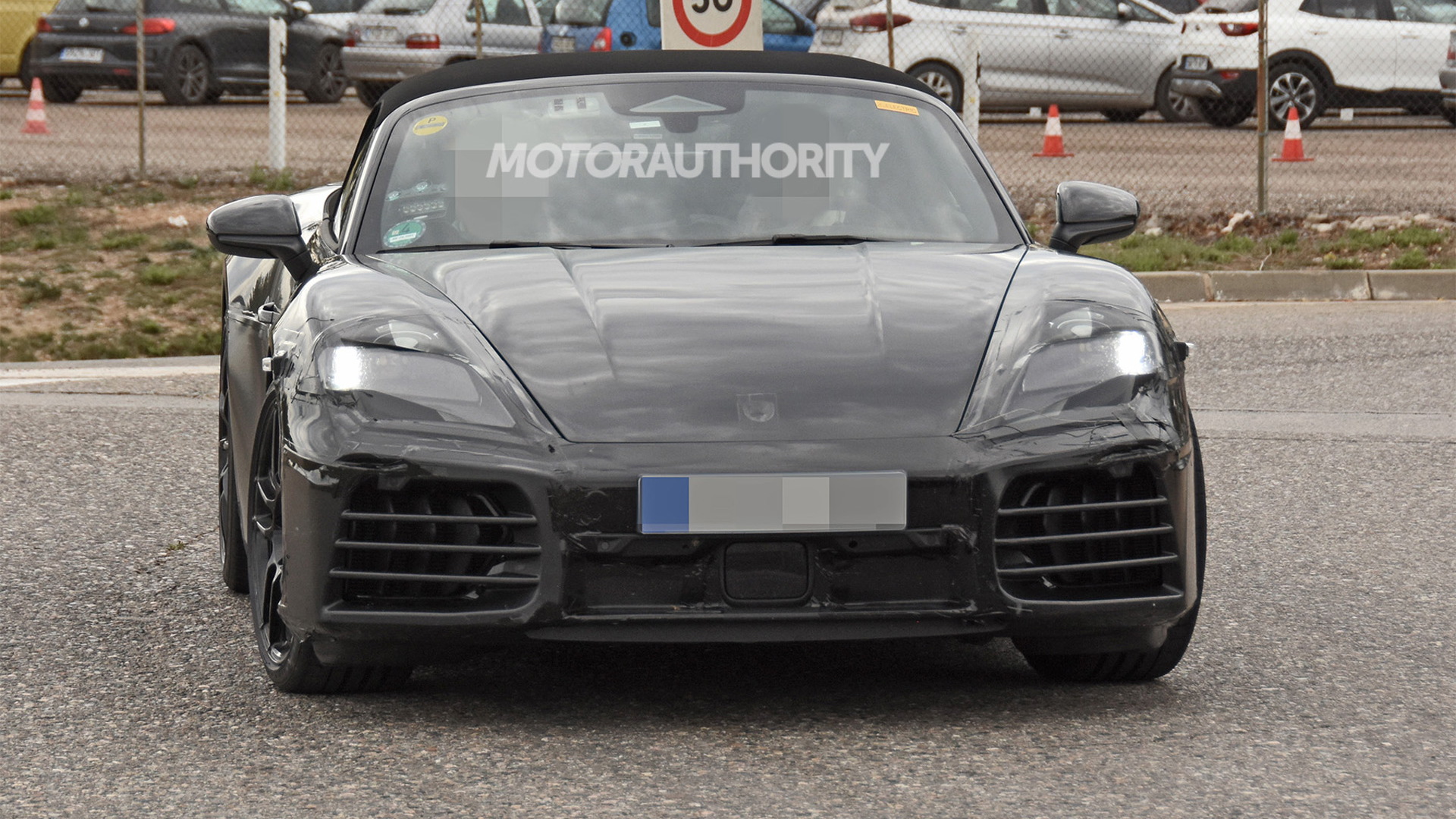 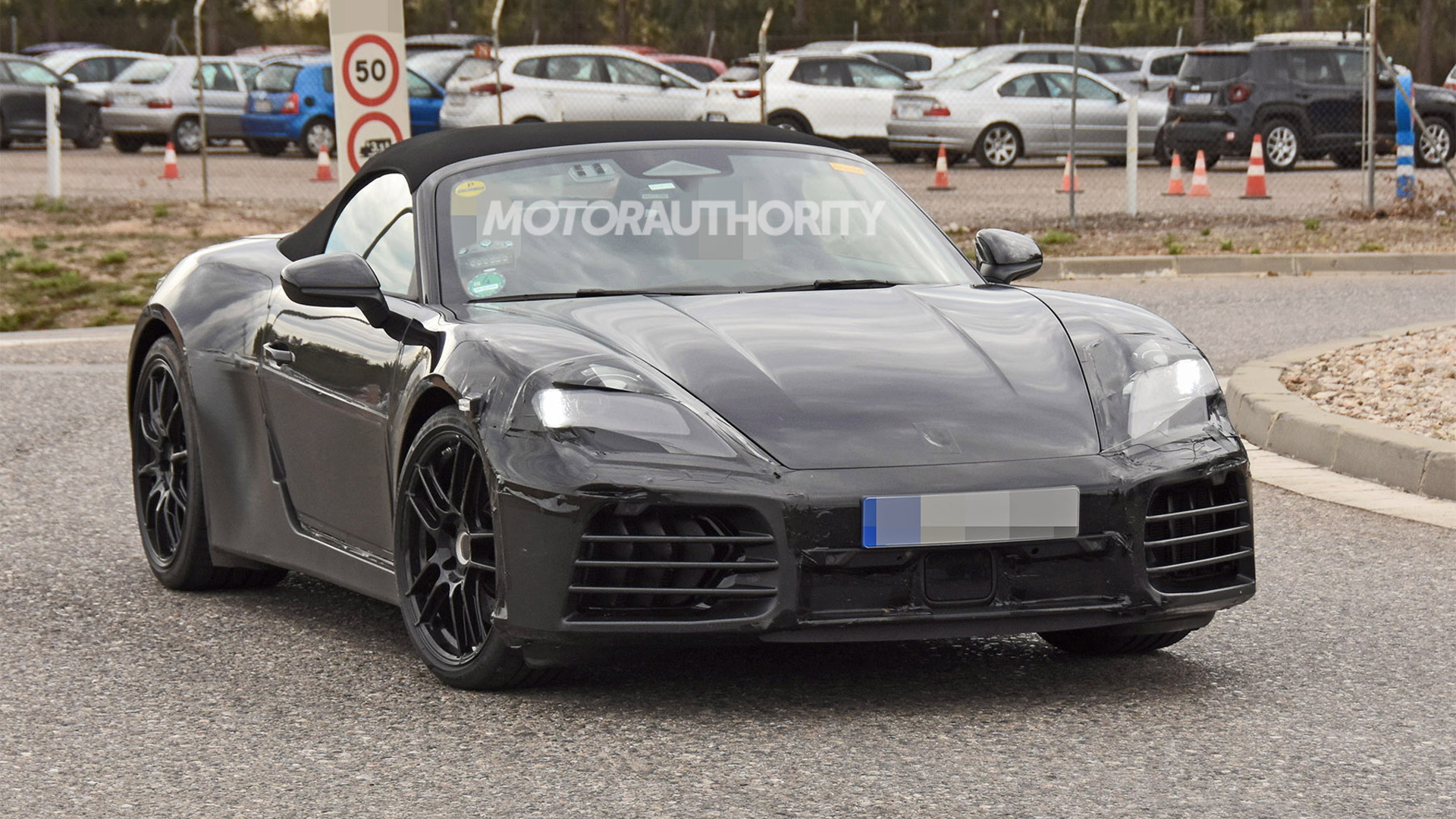 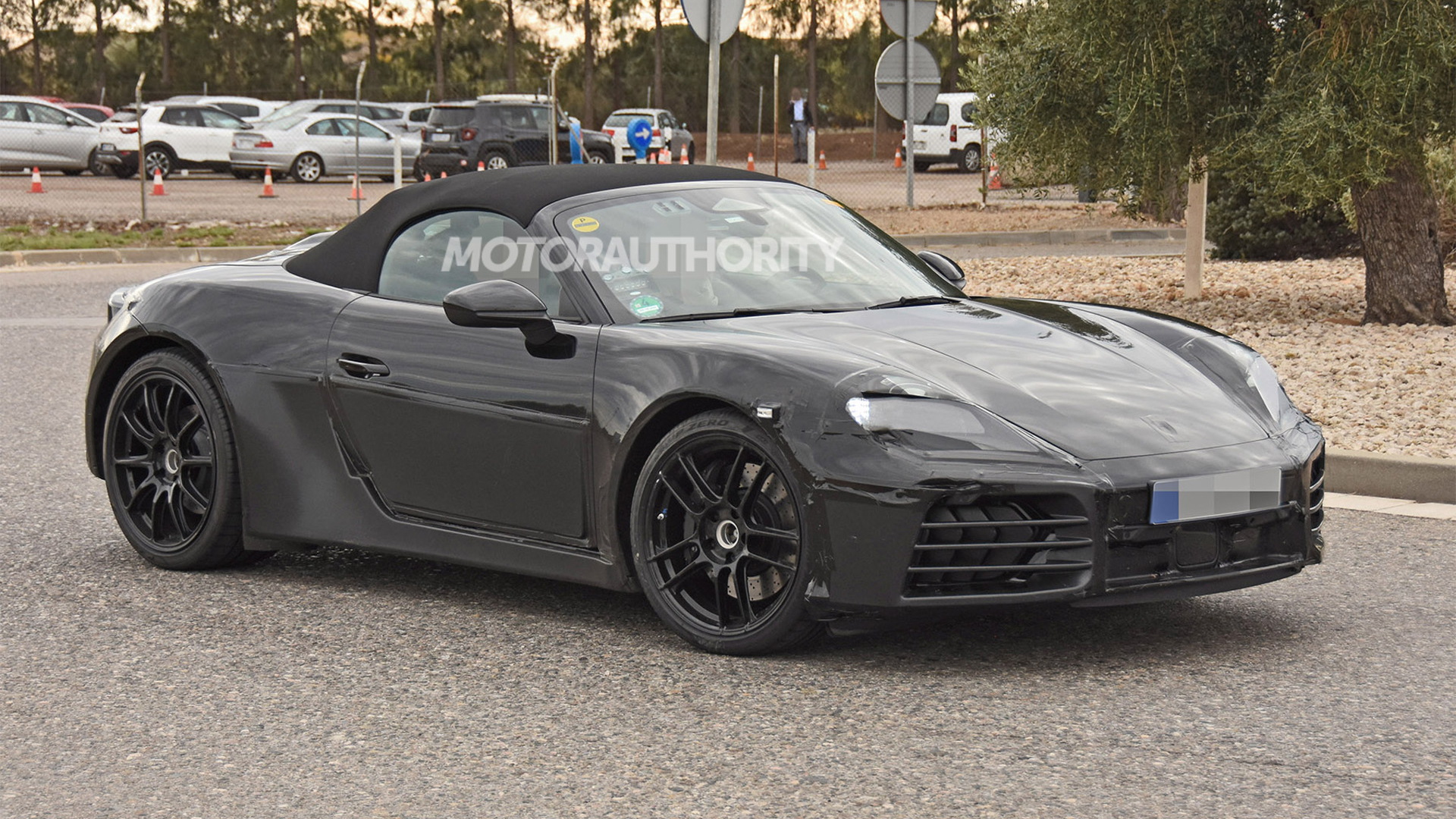 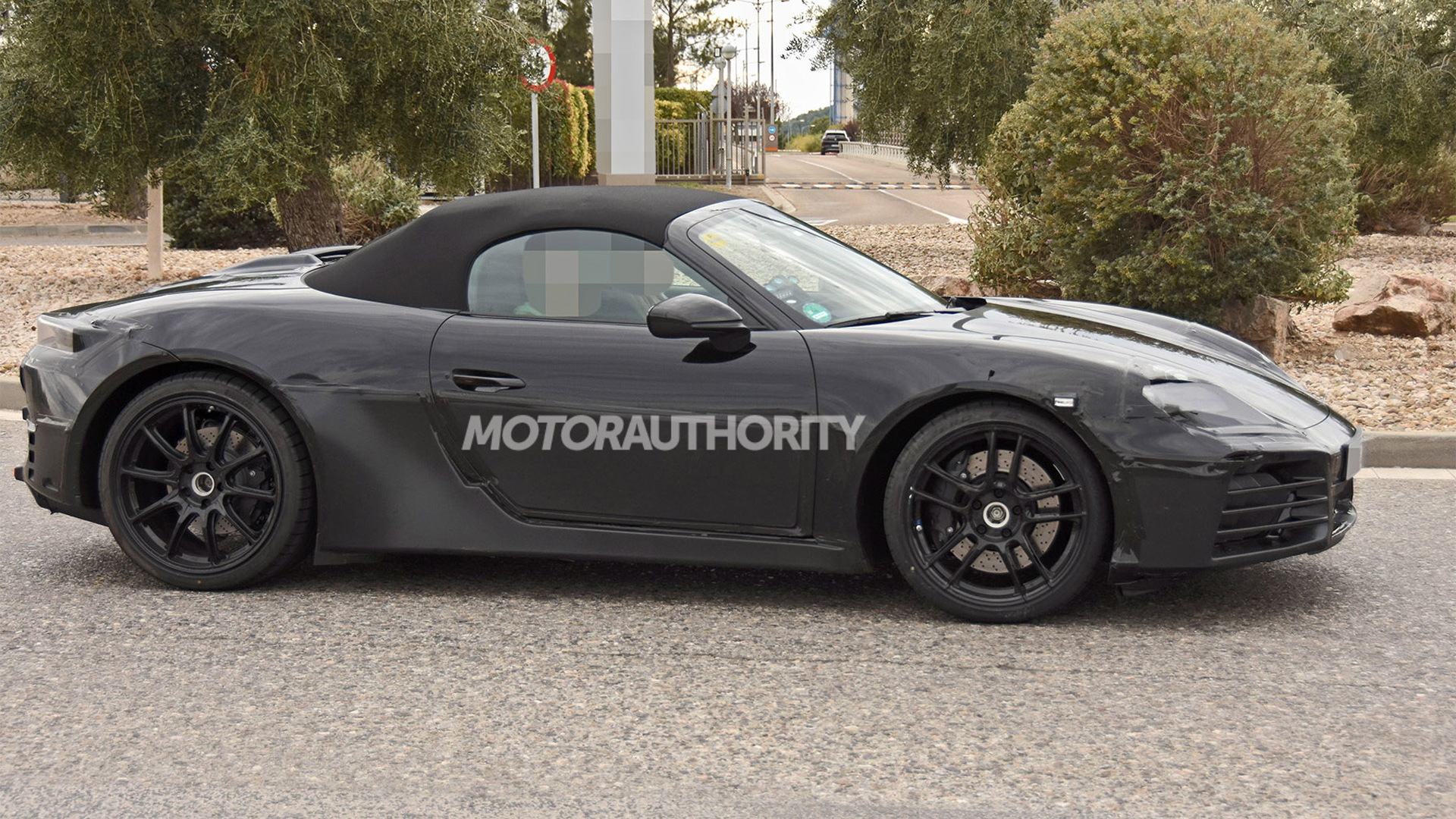 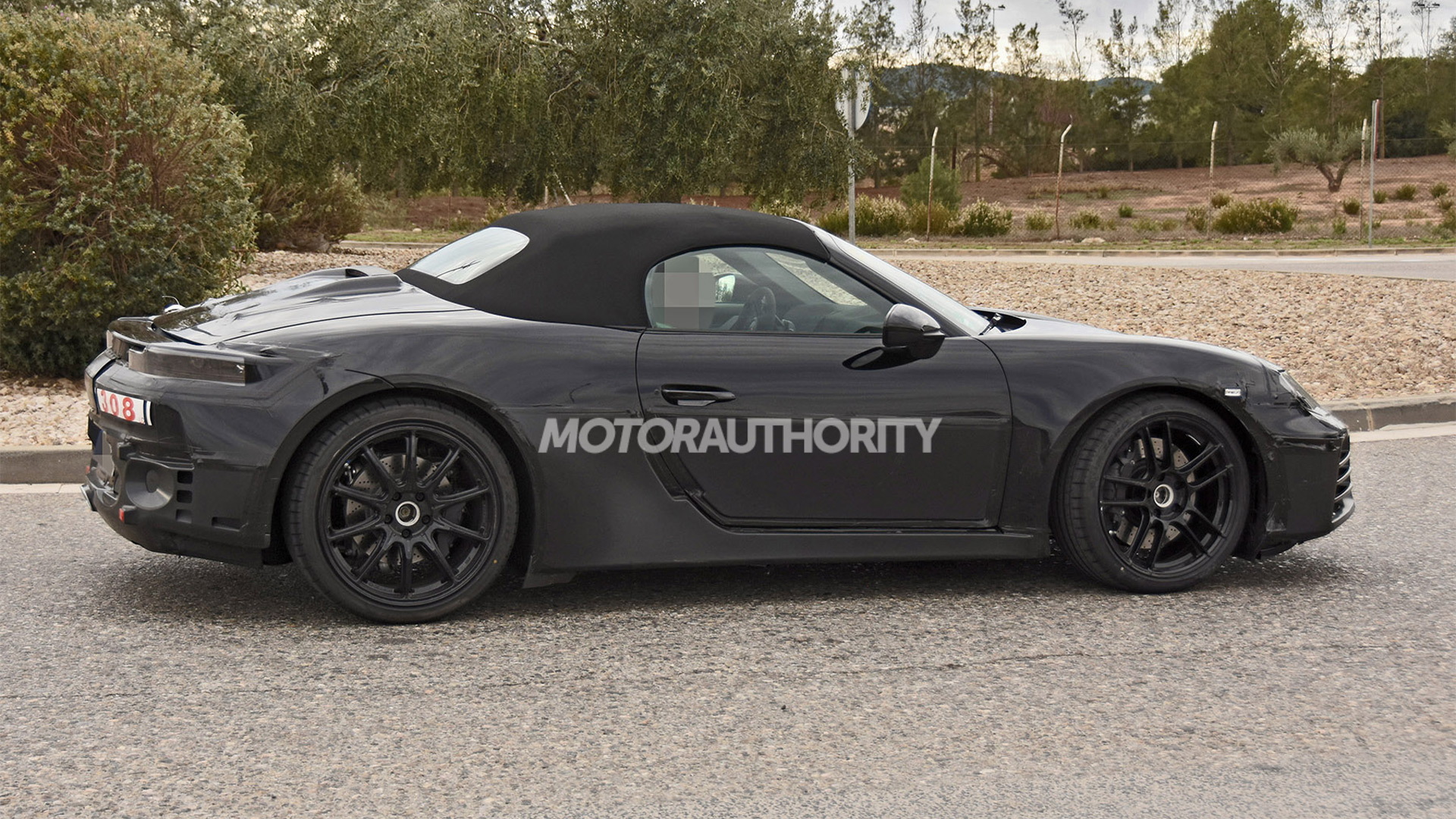 The first electric sports car from Porsche has been spotted testing.

The car is an electric next-generation 718 Boxster convertible, and was confirmed in March by Porsche CEO Oliver Blume for launch by 2025. An electric 718 Cayman coupe should also be in the pipeline.

The prototype is heavily camouflaged, but details like active shutters in the front fascia's air intakes can be clearly seen, as can the light strip forming the taillights. The exhaust vent on the prototype is a fake unit to fool onlookers, and it appears that an active rear wing might sit along the leading edge of the rear deck.

The proportions appear similar to the current 718, but the car looks wider overall and lower at the front. The design was previewed with the Porsche Mission R concept that was unveiled during the 2021 Munich auto show and also signaled Porsche's intention to develop an electric car for racing.

The electric 718 is expected to offer the choice of rear- or all-wheel drive. The Mission R concept has a dual-motor, all-wheel-drive system delivering 670 hp in a race mode and a temporary 1,073 hp in a mode designed for brief qualifying runs. The concept also features a single-speed transmission that, depending on the gear ratio fitted, allows for a top speed of more than 186 mph. The 718 Cayman GT4 ePerformance prototype race car based on the Mission R has two transmissions and is capable of top speeds to match current race cars.

Even at that lower limit of performance, the electric 718 will step on the toes of the 911, especially if Porsche achieves anything close to a rumored 3,650-pound targeted maximum curb weight. To differentiate the two cars, the 911 will retain a gas engine for as long as regulations allow.

It's too early to talk range, but the the Mission R concept had an 80-kwh battery estimated to deliver around 250 miles of range.

A dedicated EV platform is expected to underpin the electric 718. Likely to be the same one in the Mission R, the platform will house the batteries in a T-shape filling the center tunnel and the area behind the seats. Such a layout enables designers to keep the height of the car low while also delivering weight distribution similar to a mid-engine car.

The switch to an EV platform means Porsche won't offer a gas-powered next-generation 718. However, Porsche is expected to continue offering the current 718 alongside the new electric 718 for a period, perhaps with updates, just like it plans to do with the current Macan once the Macan EV arrives in early 2024.

The accelerated growth in demand for EVs in the premium sector has caught many automakers by surprise, including Porsche. Only recently the automaker predicted that half its lineup would be electrified (hybrids and EVs) by 2025, but now it's openly stating that half the lineup will likely be made up of cars running solely on electricity by that date. Further out, Porsche predicts that only the 911 will have an internal-combustion engine by the time 2030 rolls around.

Note, Porsche rolled out an electric Boxster prototype as early as 2011. Called the Boxster E, the prototype was developed purely for research purposes and came with a 29-kwh battery and a single electric motor good for 240 hp.