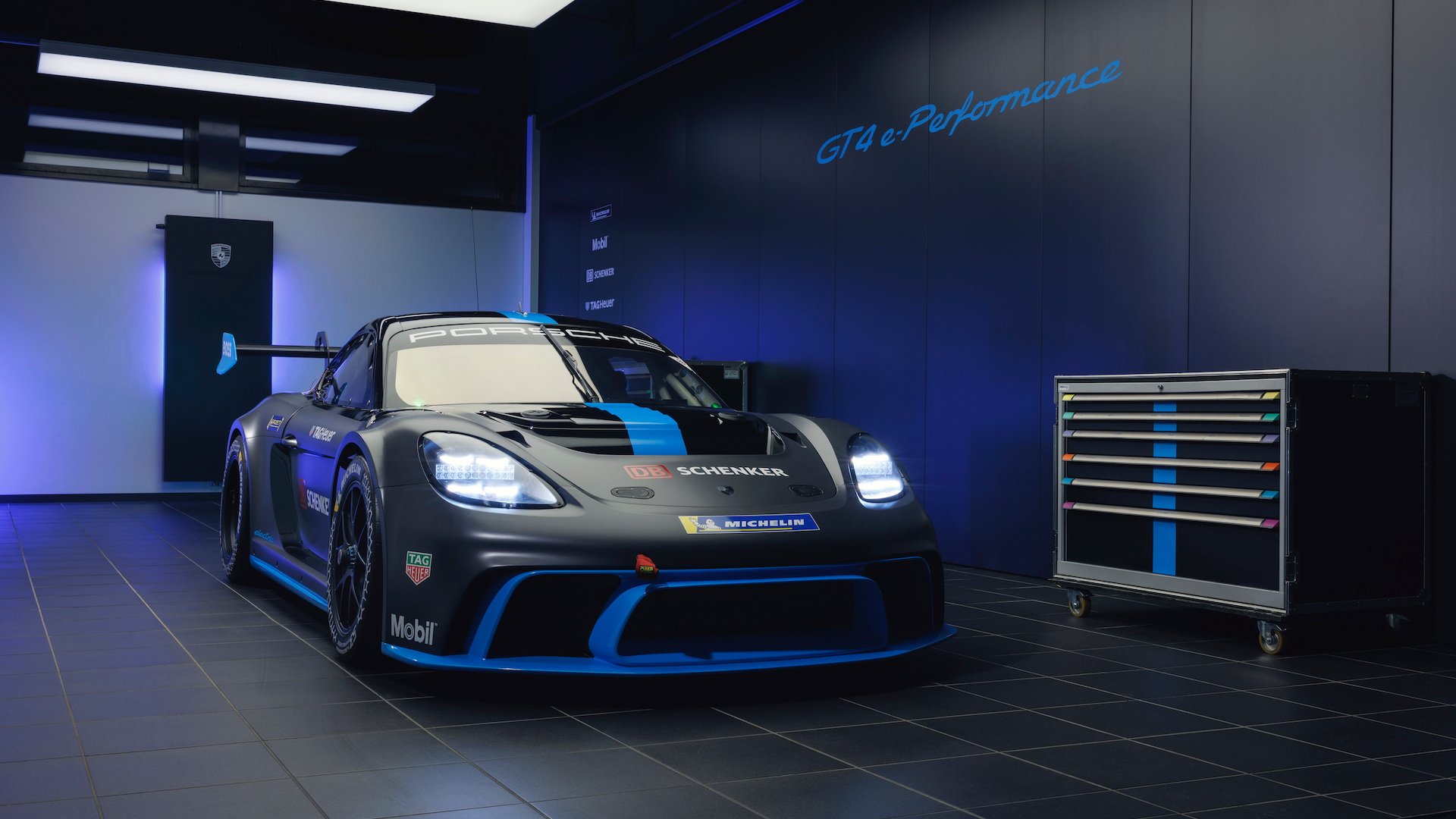 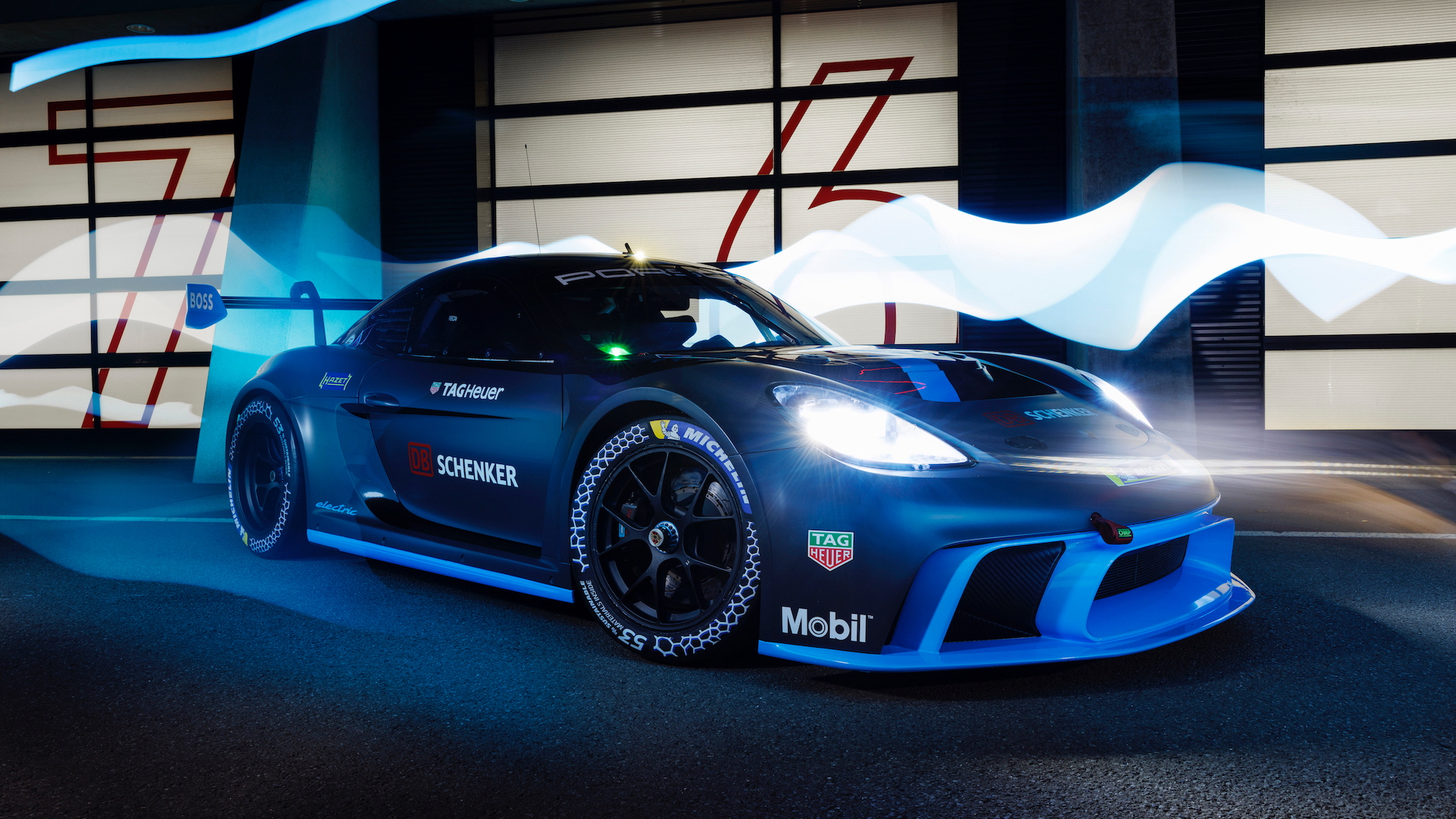 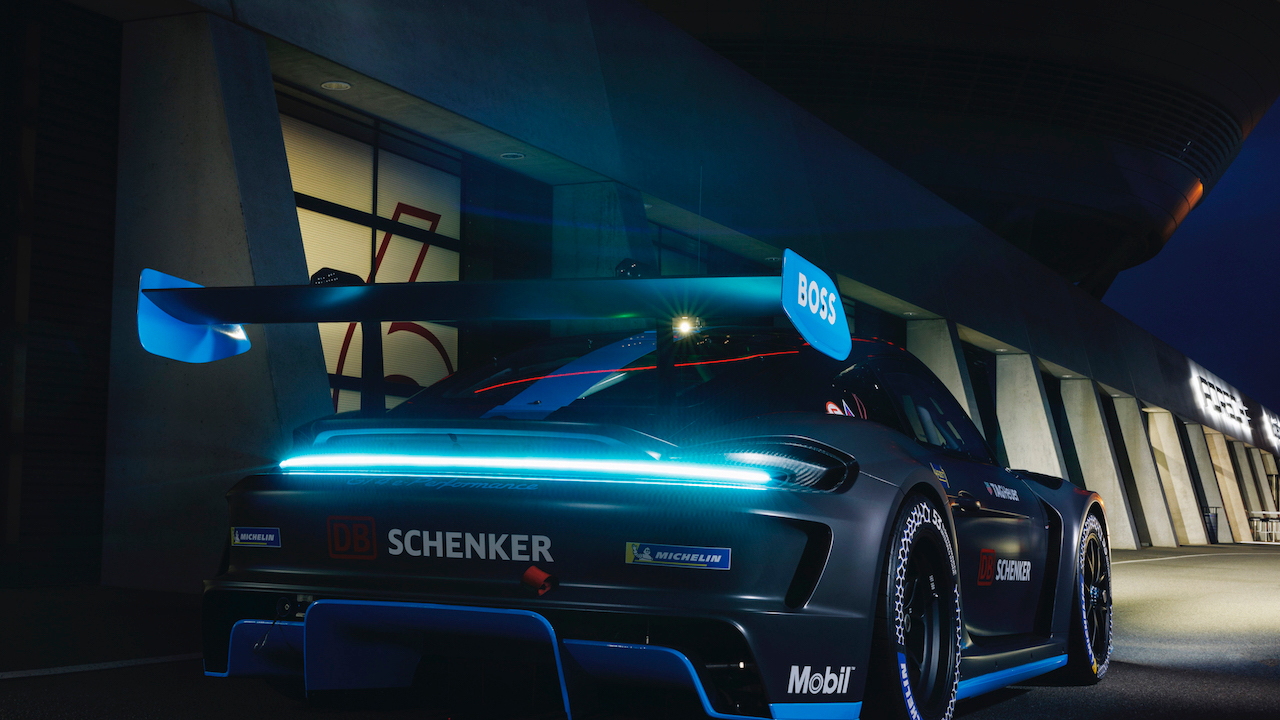 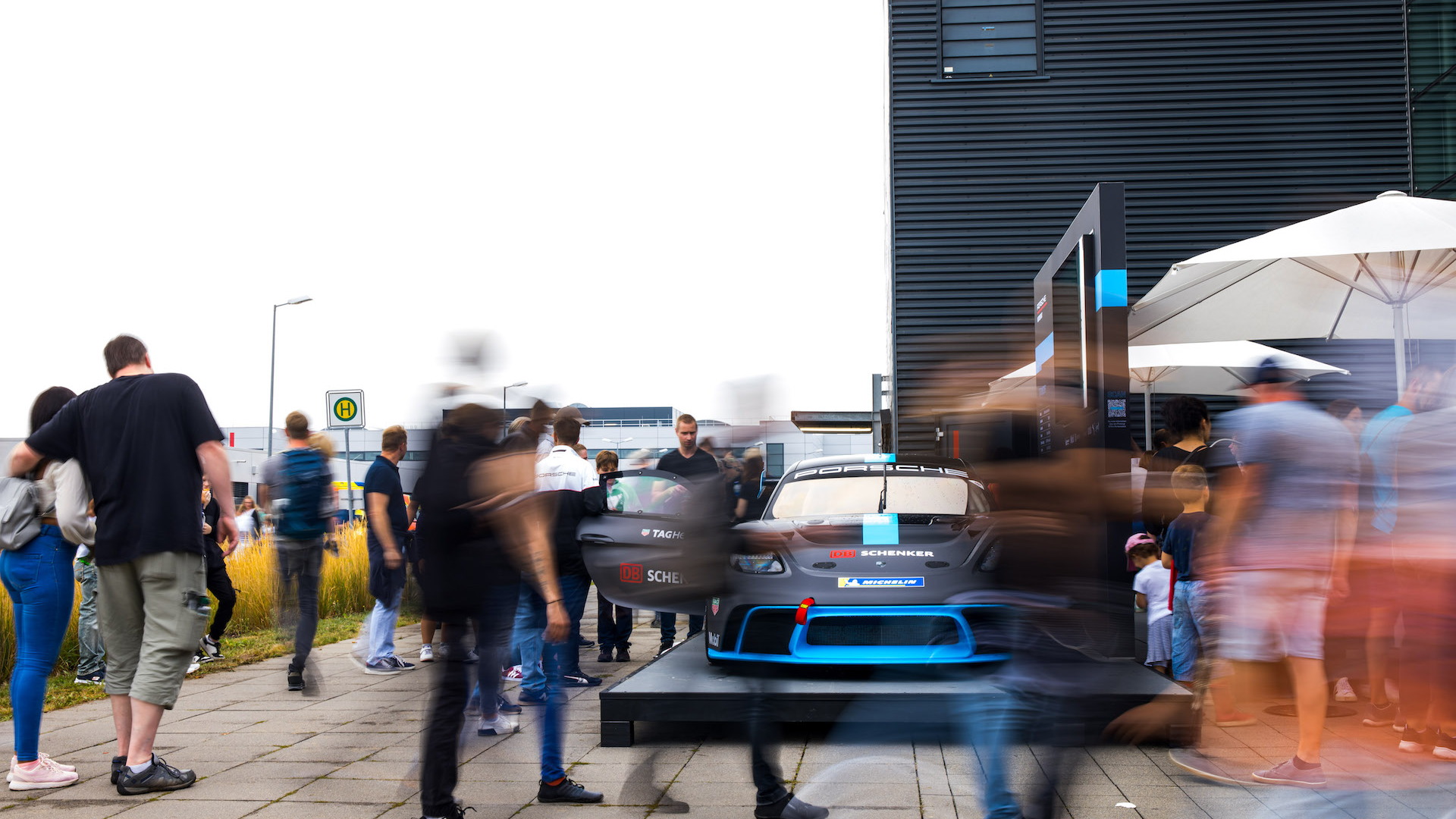 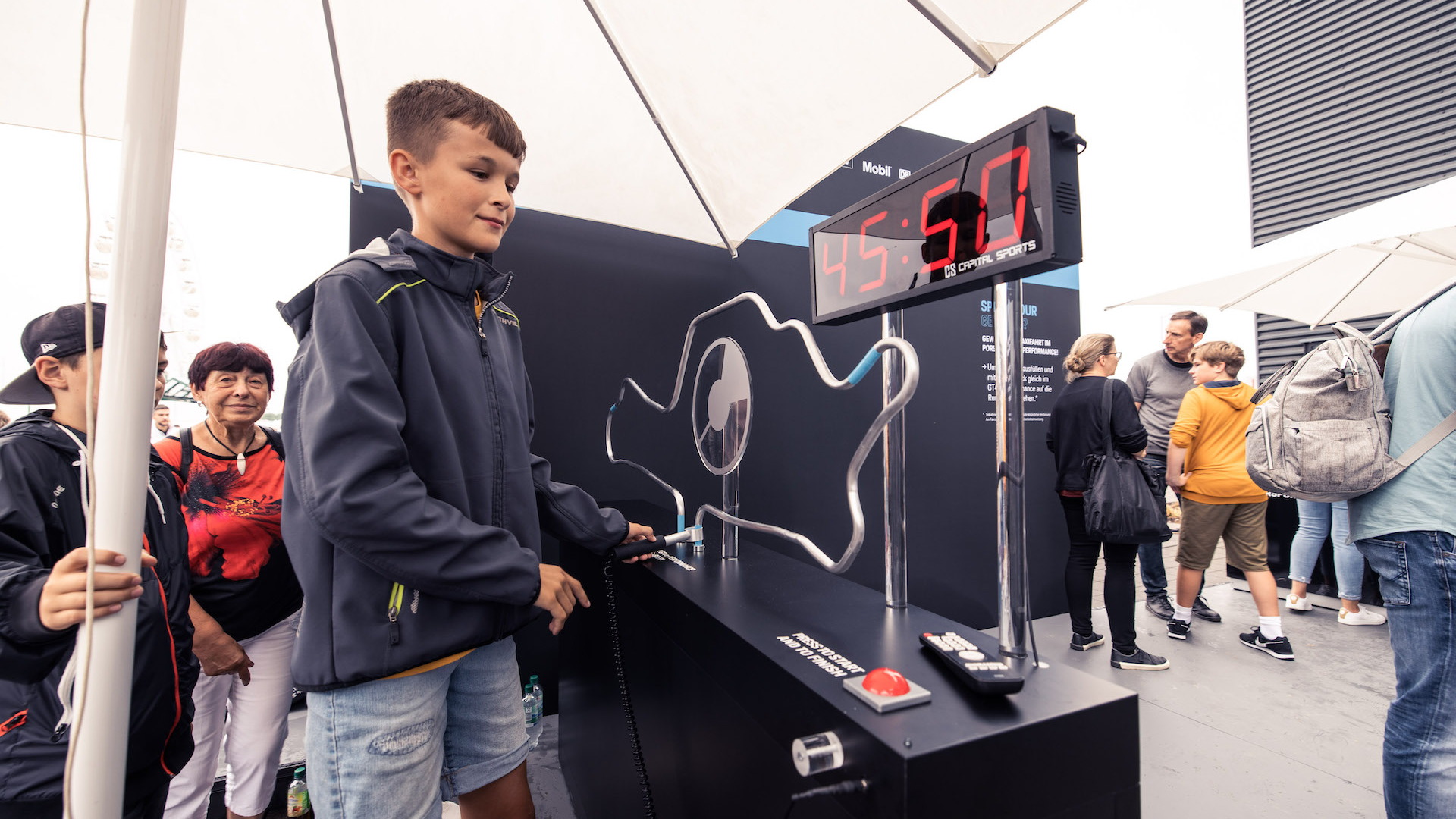 The most powerful Porsche on the road or track today is the 718 Cayman GT4 ePerformance prototype. Built to show off what an unfettered electric race car can do, its performance is nothing short of thrilling. Porsche quotes up to 1,070 hp (800 kw) of output in qualifying mode, and a continuous 600 hp (450 kw) for the 30-minute duration of a Porsche Carrera Cup race.

How fast is it? Its top speed and lap times match those of today’s 911 GT3 Cup racers. No EV on the market today can claim that.

Built like a race car, the GT4 ePerformance is hard to get into, especially as a passenger. After donning a Nomex fireproof suit, a helmet, and a HANS device, I found the best means of entry was to insert my left leg into the passenger compartment until it rested on a black metal box in the footwell. I then folded my helmeted head under the top bar of the roll cage, wiggled my torso across the bottom bar, and dropped into the seat. The last step was to raise my right leg, bending and flexing it enough to get over the sill and past the cage’s front bar.

Do not be the ground

It’s even tougher to get out. The Porsche crew insisted I prove I could get out the proper way. I had to show I could stand on the sill, then leap clear without touching the car and the ground at the same time—which could ground the car through my body in the event of an electric fault. With a battery pack delivering power at more than 900 volts, that could be lethal.

I repeated the process to get in again, then buckled the five-point racing harness to press myself firmly into the unpadded seat shell. My legs stretched straight out in front of me, because one of the three sections of the unspecified-size battery pack occupies the entire footwell.

My “taxi driver” for two laps around the track at the Porsche Experience Center in Franciacorta, Italy, is a celebrity in her own right. Simona de Silvestro not only tests electric Porsches, she has competed in the electric-car racing series FIA Formula E, the Australian Supercars circuit, and the IndyCar Series.

After the Porsche crew removed DC charging cable, a thumbs-up signaled it was time go. De Silvestro looked at me, I gave a thumbs-up, and we rolled out of the garage, accelerated down pit lane, and rocketed onto the track.

A real racer, and really noisy

First, this is absolutely a proper race car. I expected the rocket-ship straight-line acceleration; even some production EVs can knock out 0-60 mph in 3.0 seconds or less. The upcoming 1,200-hp Lucid Air Sapphire promises 0-60 mph acceleration in 1.9 seconds, an almost unthinkable number for a large luxury sedan.

But we suspect no Tesla or Lucid can hang on in corners at up to 1.5 g. On a tight left-right jog, all my neck strength couldn’t keep my helmeted head from banging off the right side, then the left side, of the seat shell side guards. I quickly learned to scan the corners and brace ahead of time.

Second, it’s much noisier inside than any other EV I’ve experienced. Formula E cars at least have open cockpits; this is the shell of a Porsche 718 Cayman with an entirely different powertrain and almost no noise insulation between the occupants and what we used to call “the oily bits.” So much for silent electric vehicles.

The GT4 ePerformance sounds a loud whine that soars in volume under power. Imagine a CGI electric jet fighter in a theater with the volume turned up to 11. The howl comes from the car’s two permanently excited magnet electric motors, drivetrain, and power electronics. A development-team engineer told Motor Authority the biggest culprit is the two single-speed transmissions between the motors and wheels that use straight-cut gears for maximum power. When Porsche first tested it, cabin noise inside the car approached 120 db, verging on painful. Soundproofing wrapped around the loudest components reduced it to tolerable for race drivers.

Finally, the Cayman GT4 ePerformance drives like a race car, but the driver brakes earlier to maximize regenerated energy. De Silvestro didn’t have a battery under her feet. Instead, she had two conventional pedals, and she braked hard before the first corner.

In the Taycan, Porsche provides no regenerative braking on accelerator lift-off (except a bit in the Sport modes). Similarly, the brake pedal in the GT4 ePerformance must be used to initiate regen for both motors. To maintain a conventional brake feel for the driver, the car is set up for 60% regen and 40% friction braking up front and 100% regen at the rear.

The car’s all-wheel drive and instant electric torque let de Silvestro power out of corners earlier than she would have in a gasoline car. In some corners, once the wheels cleared the rumble strips, it was full power-on to sprint to the next early braking point. Rinse and repeat.

The project from which this demonstrator EV race car emerged began in 2018, though the Mission R concept wasn’t announced until the 2021 Frankfurt auto show, held that year in Munich. The actual track car debuted at the Goodwood Festival of Speed this past June, covering the famous 1.16-mile hill-climb course in 45.5 seconds for a second-place overall behind only the McMurtry Spierling.

Porsche notes the Cayman GT4 ePerformance has been built to the same specs as a 718 Cayman GT4 Clubsport racer, though it’s 5.5 inches wider, due in part to the custom 18-inch wide tires developed with Michelin, which contain up to 53% bio-based or renewable materials. The car’s most significant feature is the oil cooling of the packs, motors, and power electronics; it can shed heat fast enough that it can run at the full 600 hp from full capacity until the pack is depleted.

The GT4 ePerformance will be showcased at race events around the world over the next year and a half. Perhaps one day, a team member said wistfully, it can run the first half-hour of Clubsport races to show just how competitive an electric racer can be against combustion-engined counterparts.

Still, it will take a while for racetrack owners to decide they want to accommodate EV racing, said Thomas Laudenbach, head of Porsche Motorsports. The electrical infrastructure to provide even a couple of dozen vehicles with simultaneous DC fast-charging is substantial and costly.

At the Experience Center in Franciacorta, the GT4 ePerformance charged via a massive, 8x10-foot tall metal cube containing multiple used Taycan battery packs. The cube can charge the car’s 900-volt battery pack from 5-80% in just 15 minutes.

Not all teams will have the resources to ship their own charging infrastructure around the world. But until electric racing is more established, Laudenbach said, Porsche will assess what it will need to do at each track.

Will a Clubsport version of the GT4 ePerformance car be offered to customers? Laudenbach demurred, saying the company was listening to feedback from race teams, customers, track owners, and others.

The most common question the team received at Goodwood, he said, was whether it was electric or not. The car now has “Electric” in large letters across the back.

The fact that so many people weren’t sure it was electric seems like a good omen. If Porsche’s first EV race car can easily be mistaken for a gasoline racer—in performance, if not necessarily in sound—that means it’s viewed as competitive already. Mission R accomplished?

Porsche provided airfare, lodging, and track time for Motor Authority to bring you this firsthand report.