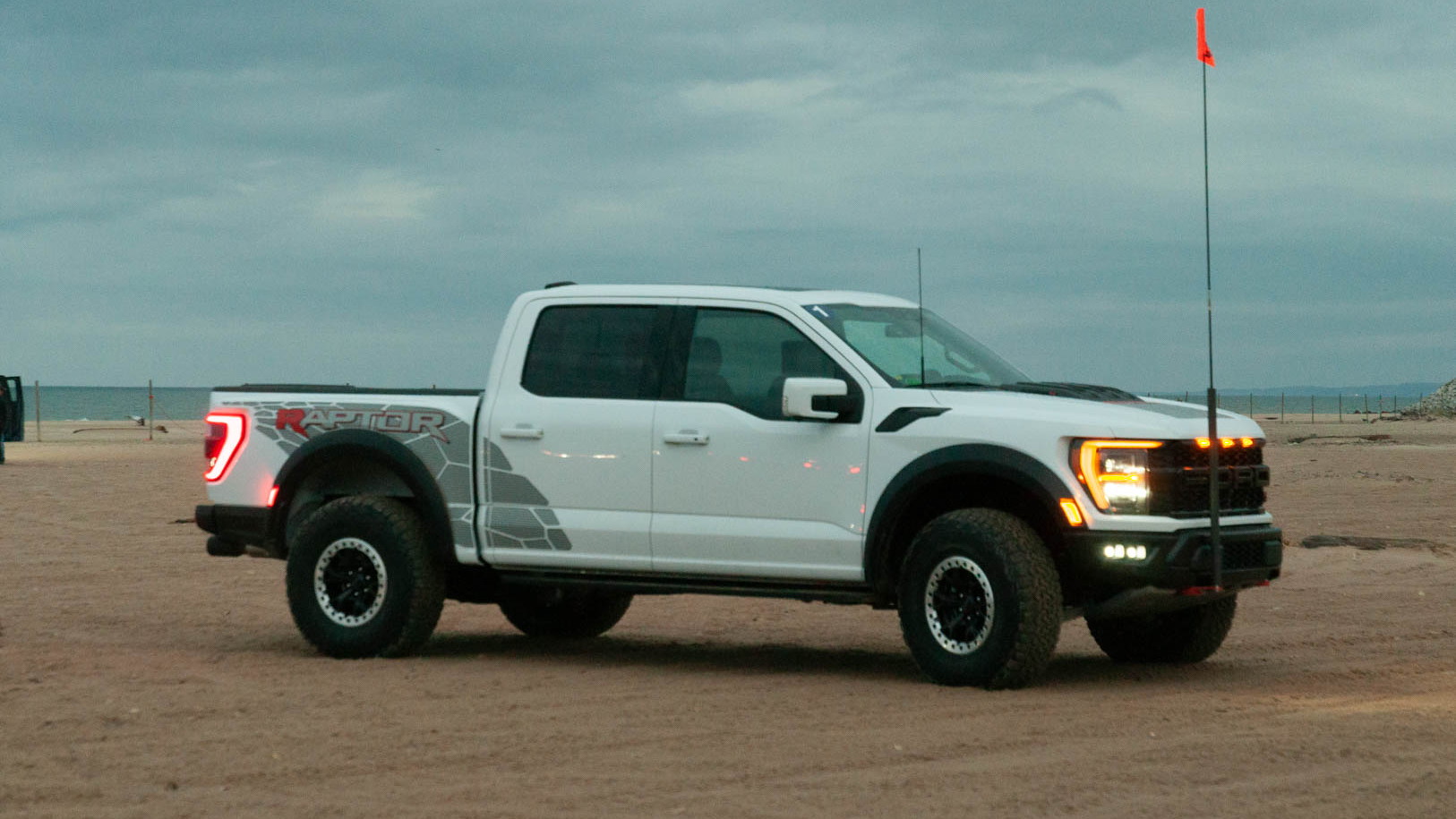 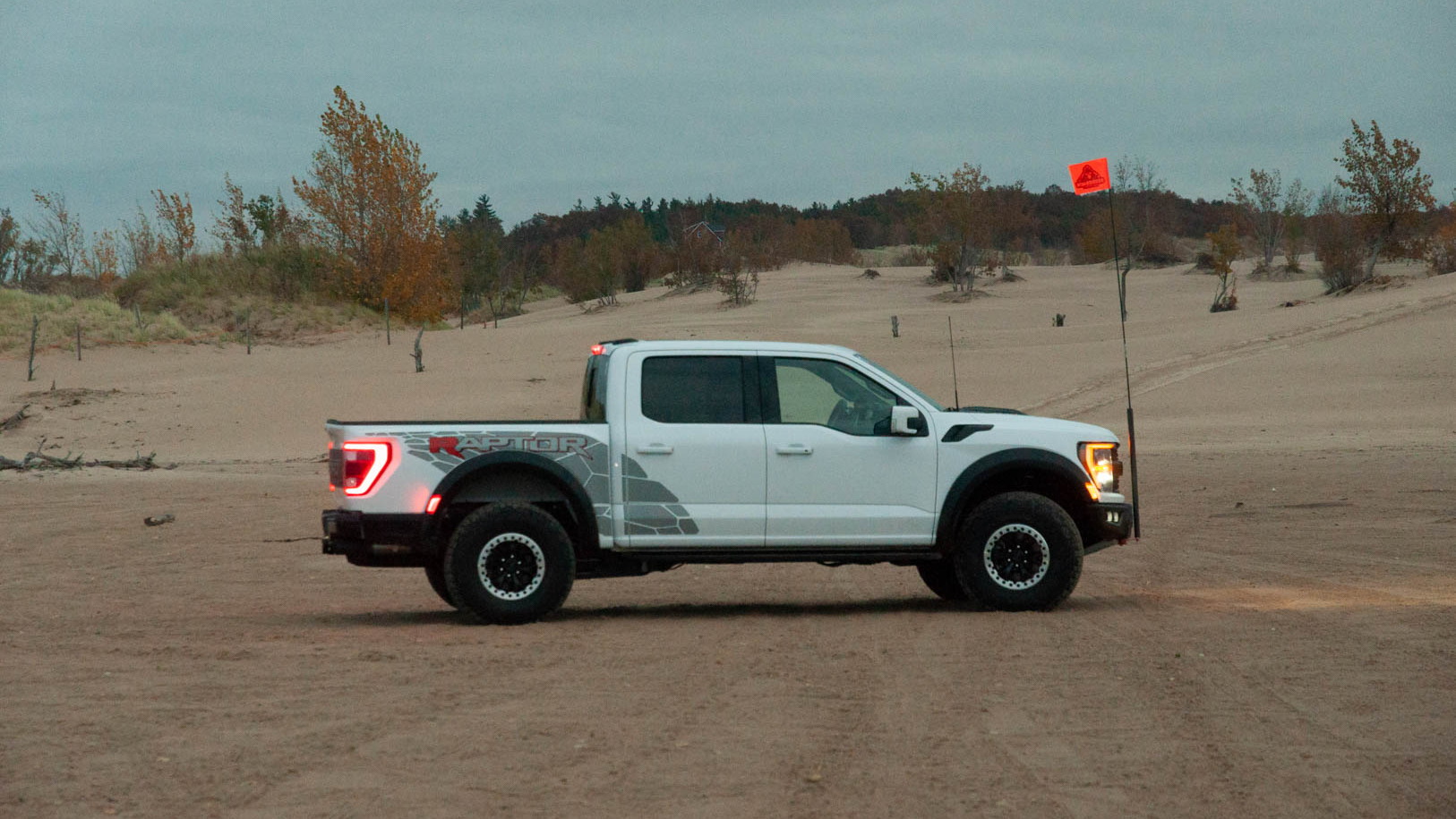 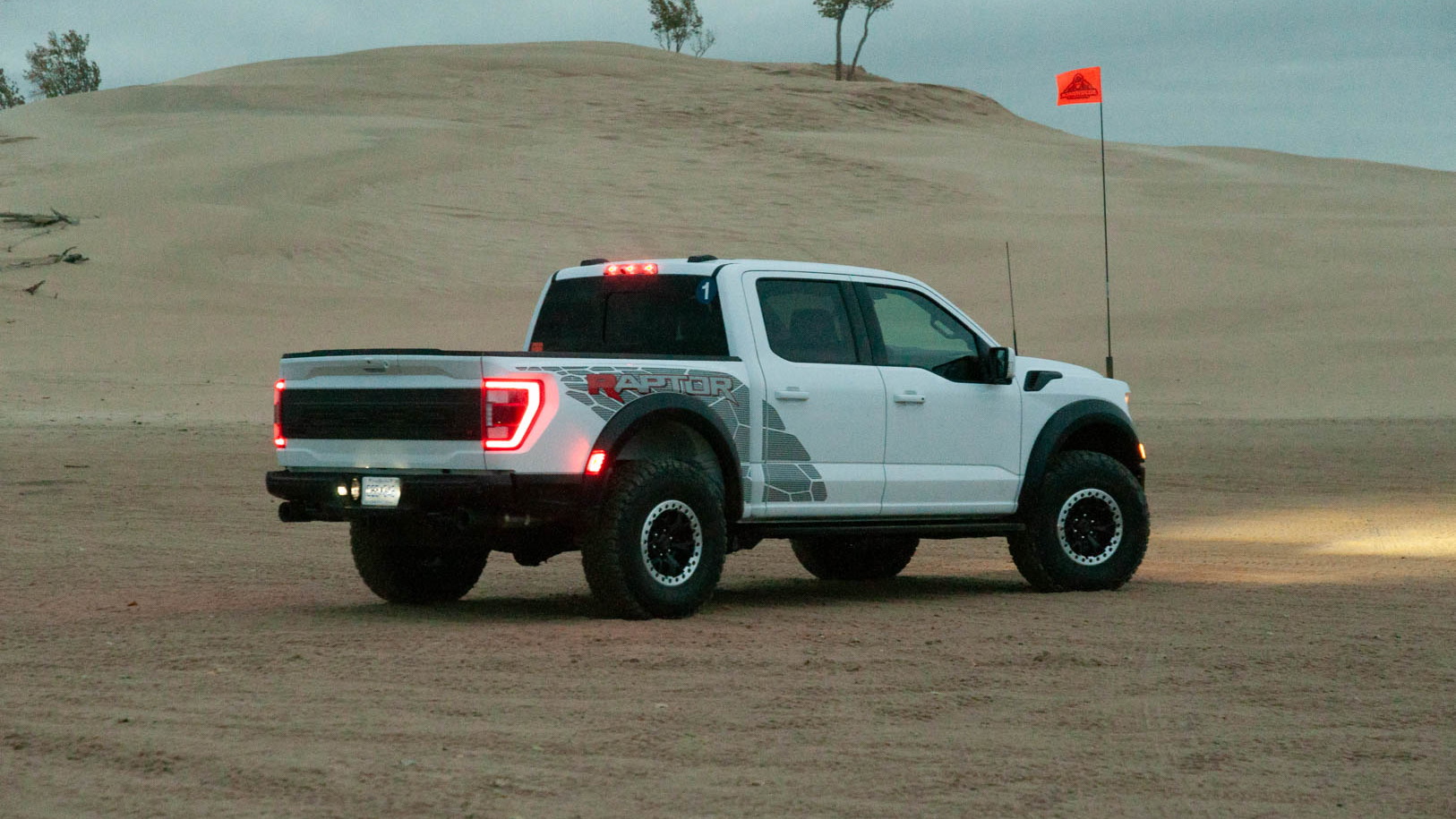 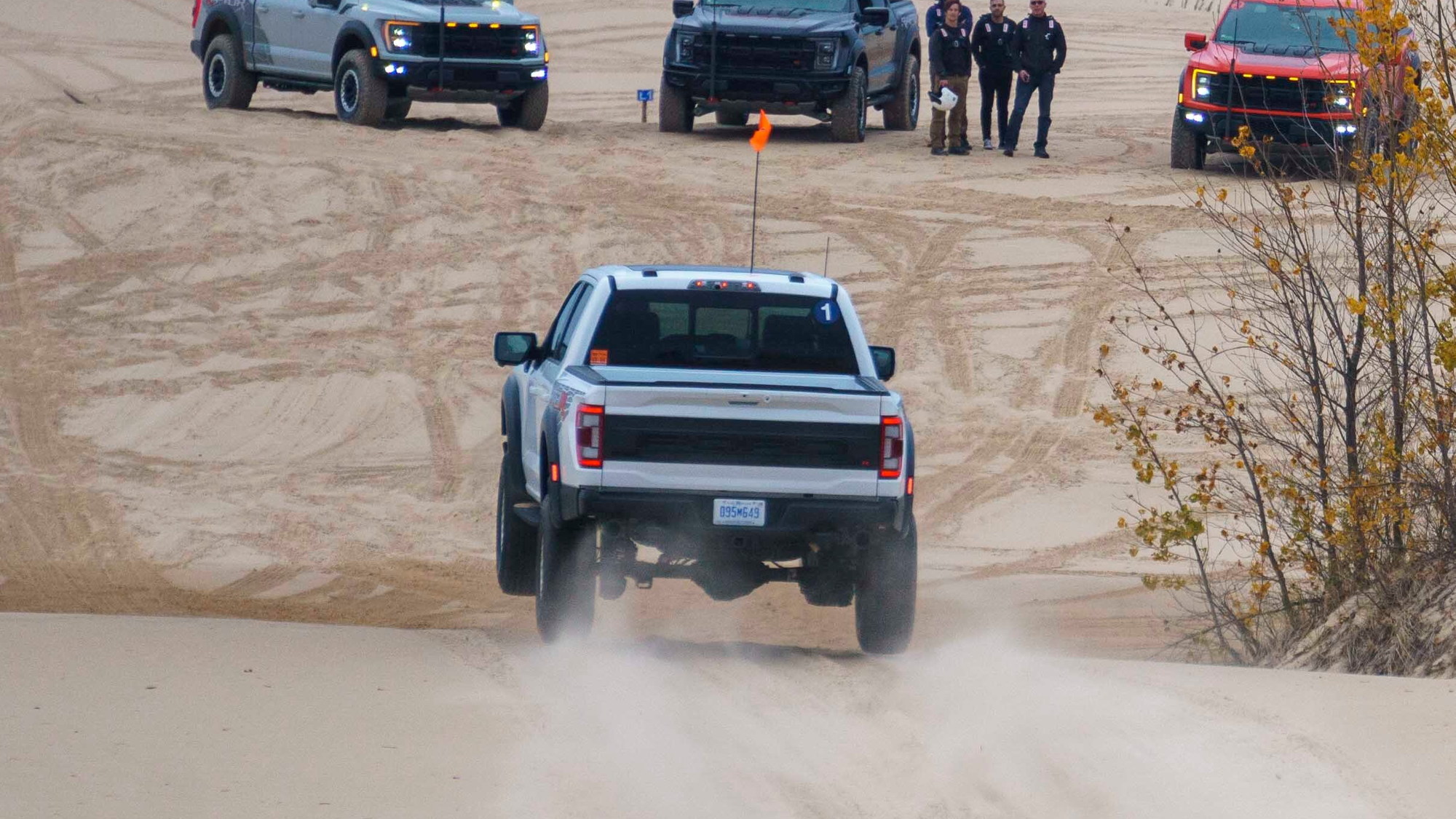 The 2021 Ford F-150 Raptor arrived with a problem. It had been surpassed by the Ram TRX and no longer marked peak truck.

In the most American solution possible, Ford has thrown more power at the Raptor to create the 2023 Ford F-150 Raptor R and thus solved the issue.

That roar you heard last Monday was me in the 700-hp Raptor R. Sorry, not sorry.

The Raptor R shoves a supercharged V-8 under the hood of the Blue Oval’s fully loaded, Baja-inspired pickup and supersizes the price to $109,375 to put the Raptor back in the hunt as one of the most ridiculous trucks money can buy.

Ford unleashed me in a Raptor R at Michigan’s Silver Lake State Park to rip through sand dunes and fly through the air. It became a contest of which limits would be reached first: mine or the truck’s.

As the gap between the lead Raptor R and mine widened on the pitch black highway at 6:15 am, I mashed the Raptor R’s go pedal. The truck’s front end visibly lifted as the rear squatted and the truck shot forward. Running in Baja mode with the exhaust baffles open, the exhaust roared to decibel levels that would definitely annoy the neighbors and maybe alert any local police.

Laughing maniacally I said to no one, “Hey! Ford fixed the Raptor’s power problem.” The Raptor R is terrific in its outrageousness.

When I asked Carl Widmann, chief engineer of Ford’s Performance division, if it really would’ve been that big a deal to tune the engine to 705 hp, he just laughed. After all, the Raptor R weighs roughly 400 lb less than the TRX.

Widmann’s response makes sense after spending time both on- and off-road in the Raptor R. A few extra horsepower would’ve only been for bragging rights. The Raptor R feels noticeably lighter on its rubber feet than the TRX in both dynamic transitions and general ride quality.

While the engine uses the same 2.7-liter, water-cooled, inverted supercharger spinning up to 12 psi of boost as the muscle car, it’s been revised for off-road truck duty. Mustangs don’t jump into the air, tackle steep grades, or tear through the desert on sand at high speeds.

A new supercharger pulley increases low- and mid-range torque compared to the Shelby. Unlike the TRX, supercharger whine isn’t always present in the cabin and can only be heard when specifically listening for it. The Raptor R’s power also doesn’t whack instantly, but it hits hard and shoves occupants, along with everything else in the truck, backward after a slight beat for the supercharger to spool.

To keep things lubed and cooled, Ford installed a new oil cooler and filter, along with a deeper oil pan. For better breathing, a new, wider air intake is paired with a high-flow conical air filter, translating to 66% more intake volume than the Mustang.

It’s no surprise, but the supercharged V-8’s fire and fury will cost big money even after spending six figures to buy the Raptor R. While off-roading, the supercharged V-8 guzzled fuel at the alarming rate of no better than 3 mpg. For those who feel that might not be a fair assessment, during 85 miles of highway driving, the trip computer said I averaged 11.9 mpg. EPA fuel economy ratings aren’t available yet. As a reality check, those are similar to the numbers we’ve seen in a TRX, and not that much worse than a turbo V-6 Raptor. Stay tuned for more real-world testing in the future.

The 10-speed automatic transmission has a new calibration to deal with the extra power, but like in the standard Raptor, the gear shifts are rapid, always on point, and become sharper in Sport and Baja modes. To ensure things don’t go boom, a heavy-duty turbine damper and four-pinion rear output assembly were added to the torque converter. Ford also swapped in a 5.0-inch aluminum driveshaft (standard Raptors run a 4.5-inch driveshaft) along with a pinion snubber to keep things from moving too much during hard launches.

Speaking of launches, the Raptor R lacks launch control. The TRX has it, but Widmann told me, the team is focused on off-road performance: “Why would you want launch control?” This isn’t a dragstrip truck, the engineer noted.

With its enhanced power the Raptor R squats, dives, and rolls like the street-legal trophy truck it emulates. All it took was another two cylinders, a supercharger, and 250 hp.

The Raptor’s Fox shocks with remote reservoirs carry over to the R, but the supercharged model sees the front spring rate increased by 5% to account for the V-8 powertrain’s extra 100 lb or so on the front axle.

Ford hasn’t upgraded the brakes from the standard Raptor despite the increased power. In what I could consider extreme but limited testing, two other journalists and I drag-raced through the sand continuously for nearly 30 minutes. I consistently pushed the Raptor R to about 70 mph before running out of space and slamming on the brakes. The brakes never faded, but I could smell them after repeatedly hauling nearly 6,000 lb of pickup back to reality.

To ensure the front axle handles the increased speed that will come with the increased power, Ford uses a finned aluminum front differential cover to dissipate heat. Ford also swaps in stiffer front axle bushings and an internal travel limiter.

Even with 13 inches of travel up front and 14.1 inches in the rear, I bottomed out the Raptor R’s front end three times in about five hours of off-roading. It’s able to carry so much speed that potential dangers arrive quickly. In two of the three instances, I launched the truck into the air, and the other occurred after cresting a sand dune and heading into another while carrying far too much speed. The truck didn’t care and neither did Ford engineers, who noted that’s what bash plates are for.

Unlike the more pedestrian Raptor (words I never thought I’d type), the R model only comes on squishy 37-inch tires. There is no 35-inch rubber option, which on the non-R model is the more fun option thanks to less tire weight and the ability to rotate quicker in the sand. The extra power of the R solves most of that problem as the extra weight of the 37s isn’t felt as much while giving the truck an approach angle of 33 degrees and an extra 1.3 inches of ground clearance over a Raptor on 35s.

Yes, it can be loud

After spending a day blasting over and through sand dunes, I think the Raptor R might be too loud. I must be getting old.

Widdman told me at full throttle in Baja mode (which has the active exhaust dumps open) the exhaust reaches 80 db in the cab and 130 db at the tips. As a point of reference, Silver Lake State Park’s exhaust noise limit is 94 db, not that anyone but me seemed to notice that bullet point on the map with the park rules.

The second-generation Raptor built from 2017 to 2020, with its twin-turbo V-6, didn’t sound good. Ford knew it, and we knew it. The current gen-three truck fixed that issue with a new exhaust system featuring a “trumpet” design and equal-length tubing. The result is a sound almost like a straight-piped Nissan GT-R mixed with a Z.

With Quiet, Normal, Sport, and Baja modes, the truck can run with the baffles completely closed, slightly open, more open, or fully open. The baffles are always open above 4,000 rpm regardless of mode. It will default to Normal mode unless programmed to start in Quiet mode. While Normal mode definitely provides a bark upon startup, it’s tame compared to the TRX, and at idle it’s downright mellow. Opening up the dumps in Baja mode sounds better in general, but it can border on tiring as I experienced while burying the throttle over and over again off-road. On road, even in Baja mode, the exhaust doesn’t seem to boom or drone, but we’ll need more time with the truck in the real world to truly determine that.

It feels like a stretch to call any Raptor a sleeper, but it will take a keen eye to tell an R model from a standard Raptor.

Visually, the only differences between a Raptor R and a standard Raptor are blacked-out trim, orange tow hooks, a 1.0-inch taller hood vent, tiny R badges on the grille and tailgate, and available R-specific fender and hood graphics with V-8 slathered all over them.

Inside, the Raptor R is equipped like a loaded Raptor, including the Recaro front seats, suede and leather seating surfaces, carbon-fiber trim, a 12.0-inch digital gauge cluster, and a 12.0-inch touchscreen.

At $109,145, the Raptor R addsa $37,445 premium over the base Raptor, though that truck lacks a lot of features the R has. Apples-to-apples, there’s a $25,245 price delta between a comparably equipped Raptor and Raptor R. That’s a lot of money for a supercharged V-8. Then again, can you really put a price on being king?

Ford flew Motor Authority to chilly, windy, and wet western Michigan and put us up in a small-town Marriott so we could bring you this first drive review.