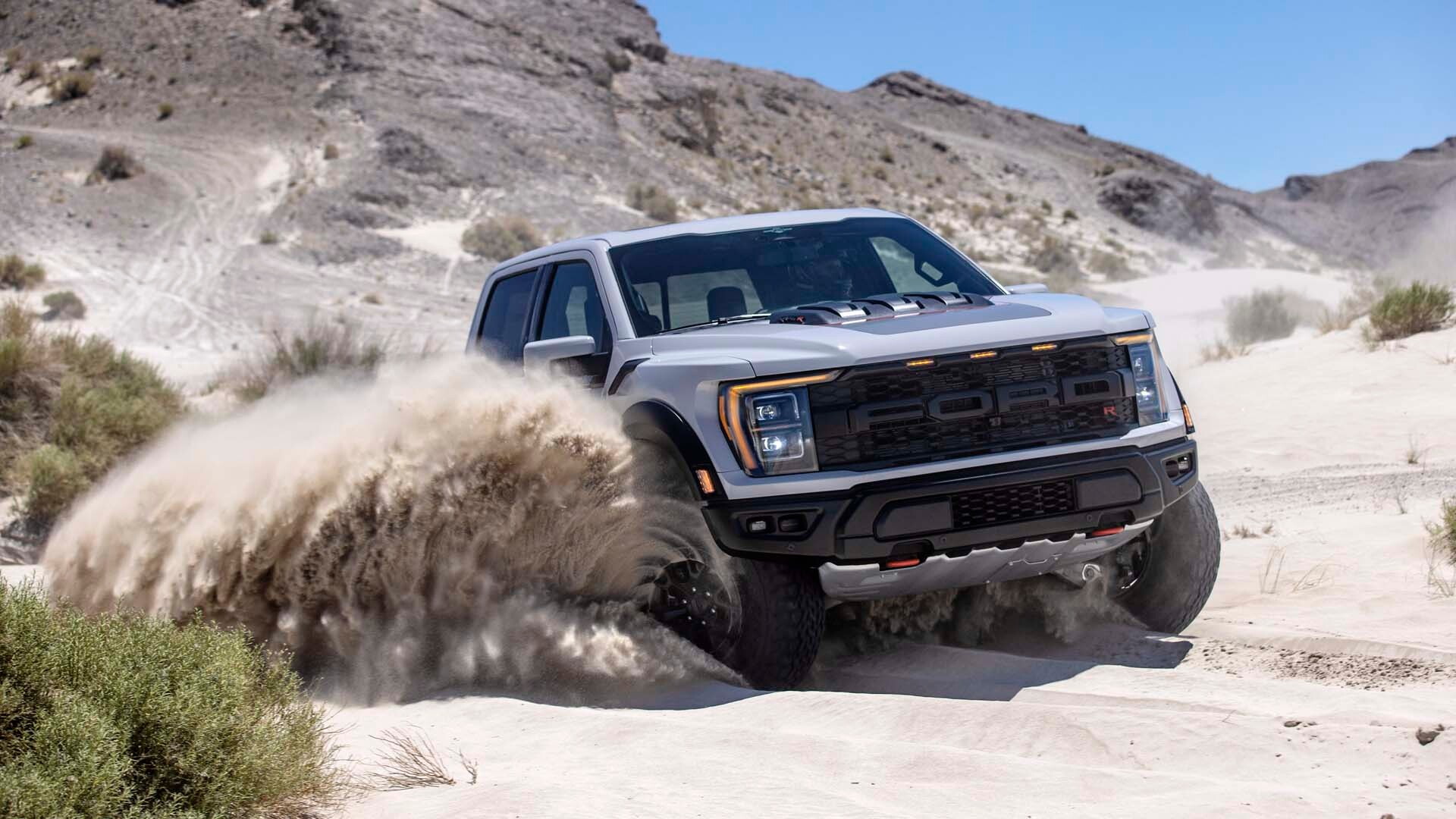 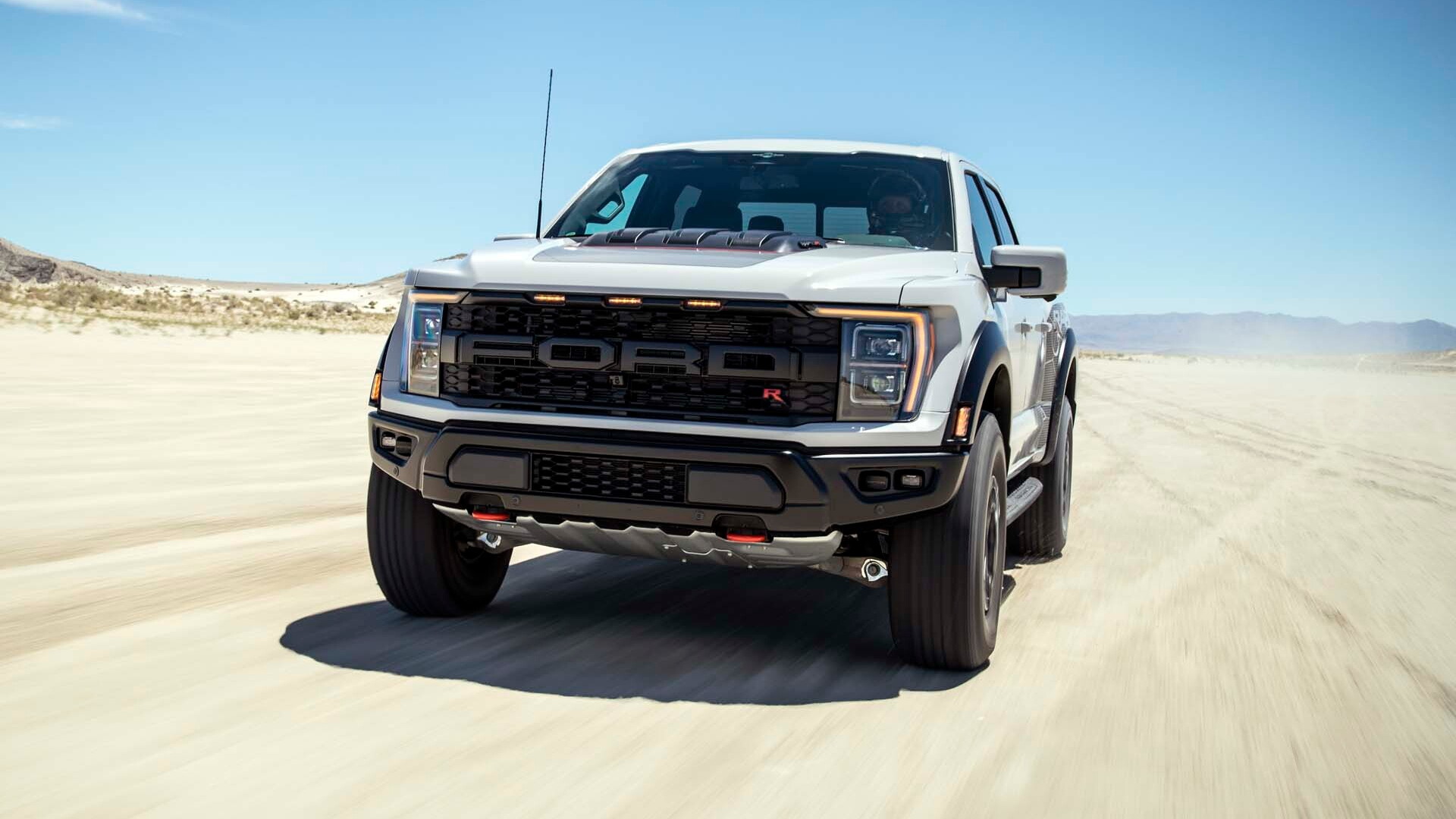 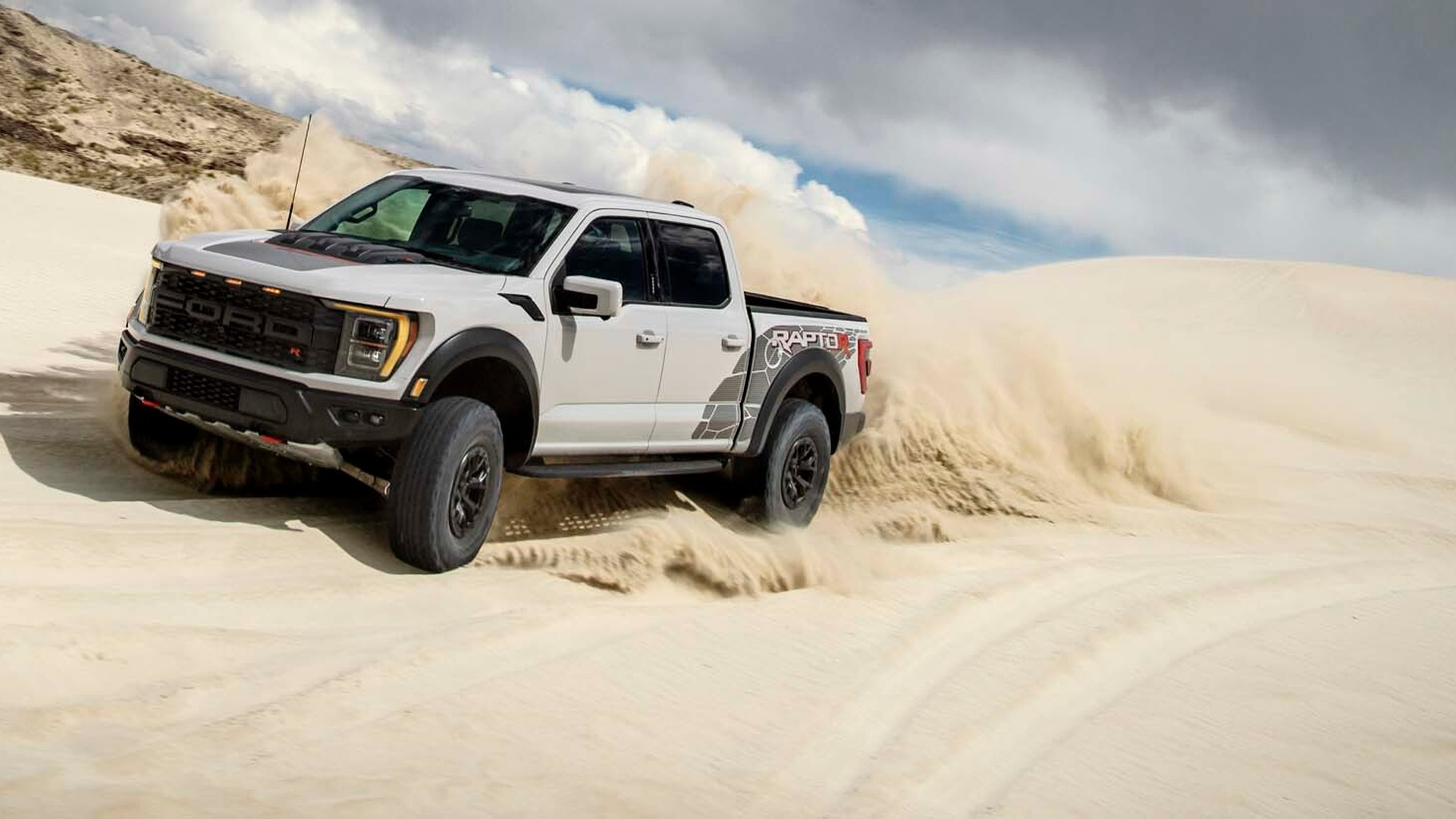 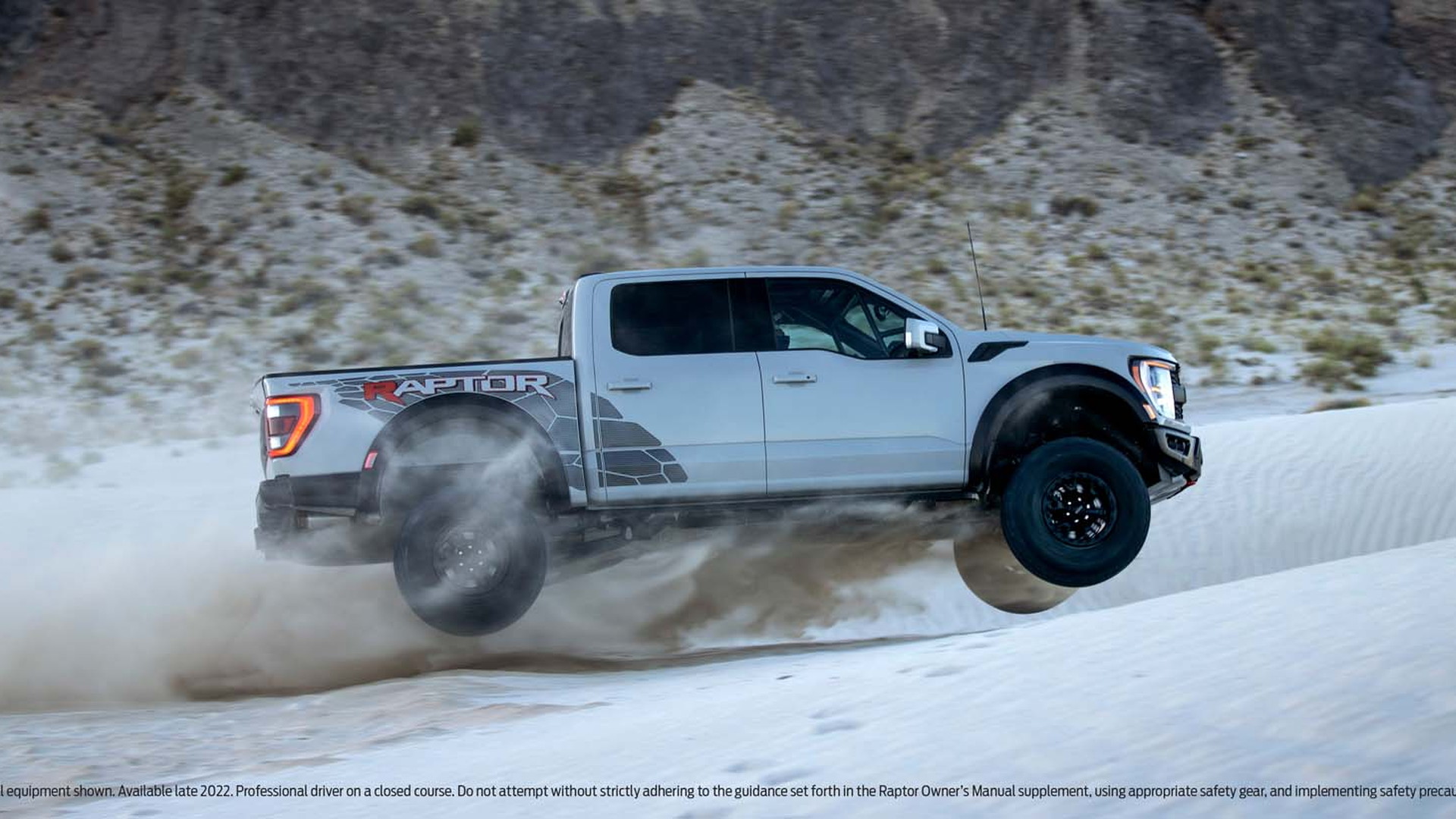 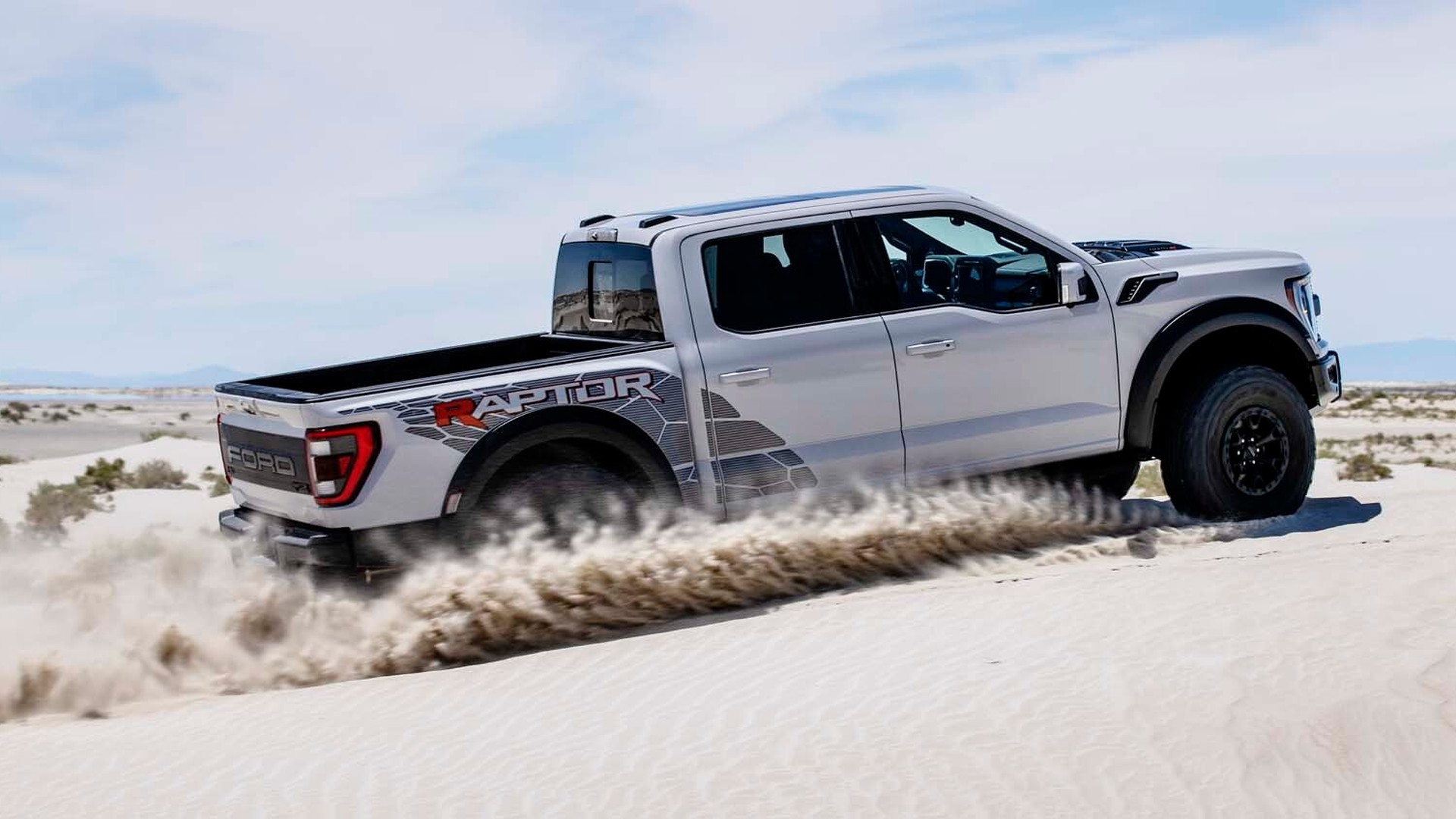 The Ford F-150 Raptor can be had with a V-8 under its hood again, and it doesn't require a third-party tuning shop.

On Monday, the 2023 Ford F-150 Raptor R was revealed with a blown V-8 and 37-inch tires. It will cost $109,145 (including a painful $1,795 destination charge) when it arrives in dealers later this year, but Ford begin taking orders immediately.

The Raptor R is all about its engine: The Mustang Shelby GT500's supercharged 5.2-liter V-8 has been shoved under the hood of the Raptor for R duty. It generates 700 hp and 640 lb-ft of torque, which does not top this rare class of performance truck. The elephant in the room must be addressed: It's less powerful than the Ram 1500 TRX, which is rated at 702 hp and 663 lb-ft. It's also less powerful than the Shelby GT500, which is rated at 760 hp, though in that application it makes only 625 lb-ft.

Why didn't the Ford team tune the engine to produce at least 703 hp to best the TRX Ford?

"Horsepower isn’t everything. It’s more about the power to weight ratio. 5 more hp won’t play a role in capability where we want to win – and that’s in the desert," Ford spokesperson Dawn McKenzie told Motor Authority.

McKenzie said Ford's not sharing a 0-60 mph time and the truck doesn't have launch control like the TRX does.

The same 2.65-liter water-cooled inverted supercharger spinning up to 12 psi of max boost from the Shelby GT500 sits atop the Raptor R's V-8, but it's been modified for high-speed off-road duty. There's a new pulley that Ford said increases low-end and mid-range torque delivery. The exhaust manifolds are now cast stainless steel, and a new crankshaft damper was installed to reduce NVH. There's a new oil cooler and filter, and the oil pan has been made deeper to ensure proper lubrication during steep grades. A new, wider air intake and a high-flow conical air filter increase intake volume by 66% over the Shelby, according to Ford.

To handle the extra power, the Raptor's 10-speed automatic transmission has a new calibration. The torque converter features a similar design as what's found in the base Raptor, but it's new for the V-8 model. It features a heavy-duty turbine damper and a four-pinion rear output assembly to ensure things don't go boom.

A Raptor R-specific dual exhaust system with a pass-through muffler and active valve system will enable the supercharged V-8 to go from low burble to tick-off-the-neighbors with the push of button or change of a drive mode.

Fuel economy ratings haven't been released, but rest assured it's going to guzzle premium fuel quickly. While payload remains unchanged at 1,400 lb, the Raptor R can tow up to 8,700 lb, which is 500 lb more than the standard Raptor.

The Fox shocks with remote reservoirs carry over from the standard Raptor, but for R duty the front spring rates have been increased by approximately 5% to account for the V-8's extra 100 lb or so on the front axle, McKenzie said.

The front axle was bolstered with a finned aluminum cover for better heat dissipation. Stiffer front axle bushings were swapped in along with an internal travel limiter. The aluminum drive shaft's diameter grew half an inch (now 5 inches) and a pinion snubber was added.

Every Raptor R rolls on 37-inch rubber (which is optional on the standard Raptor) and wheel travel of 13 inches up front and 14.1 inches in the rear carries over from the V-6-powered model with those tires. In our first drive of the third-generation Raptor we found the truck on the standard 35-inch tires felt lighter and rotated sideways with less effort than trucks equipped with the optional 37-inch rubber.

It'll take a keen eye to spot the Raptor R from the standard Raptor. It's all the small details that only enthusiasts might notice, like a 1.0-inch taller hood vent (which is a functional change to help keep the engine cool), and small R badges on the grille, hood, and tailgate. R-specific fender graphics will be available.

Inside, the Raptor's cabin features a black interior with leather and suede Recaro seats along with carbon fiber trim. A 12.0-inch digital gauge cluster and 12.0-inch touchscreen carry over from the Raptor.