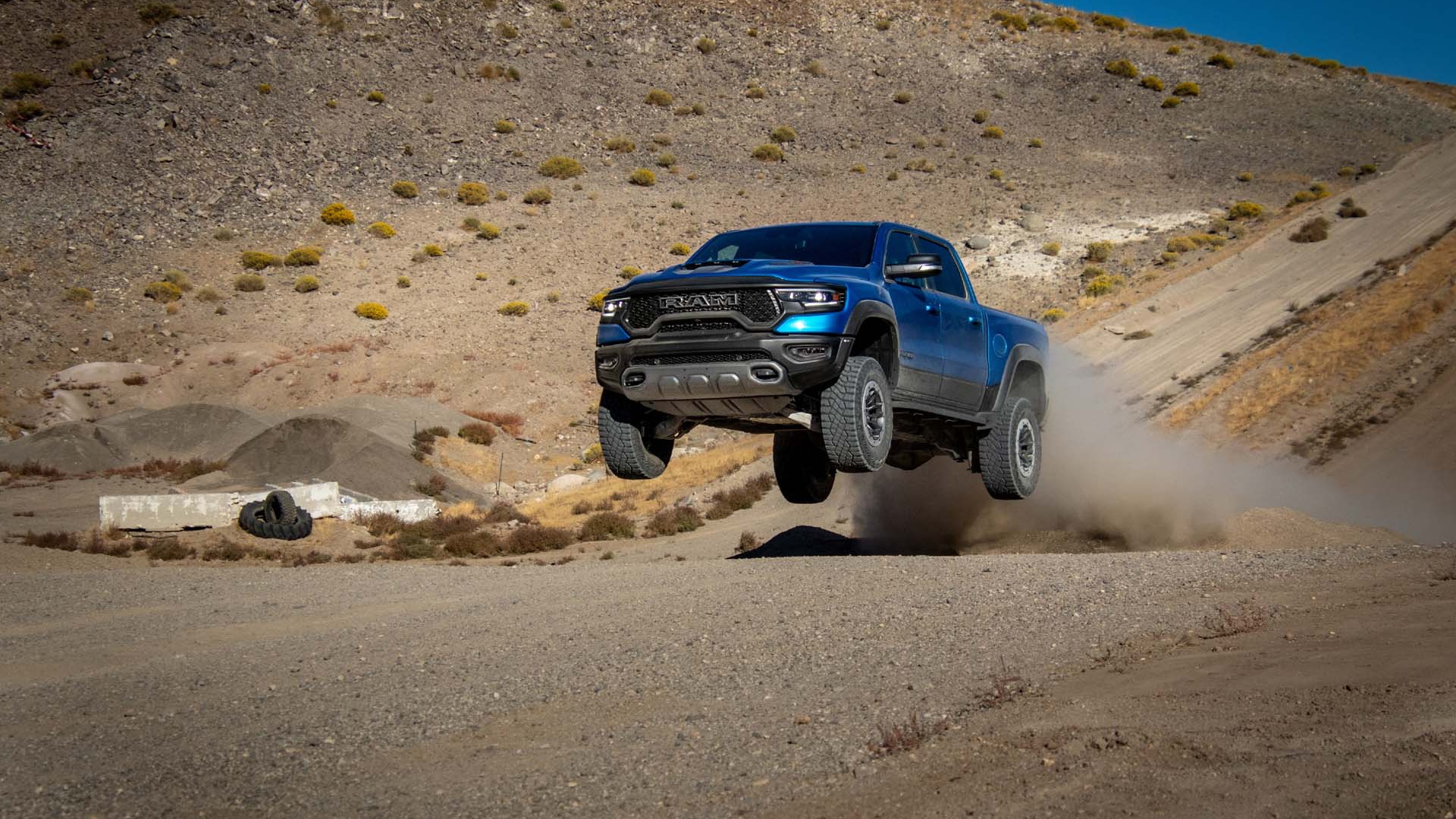 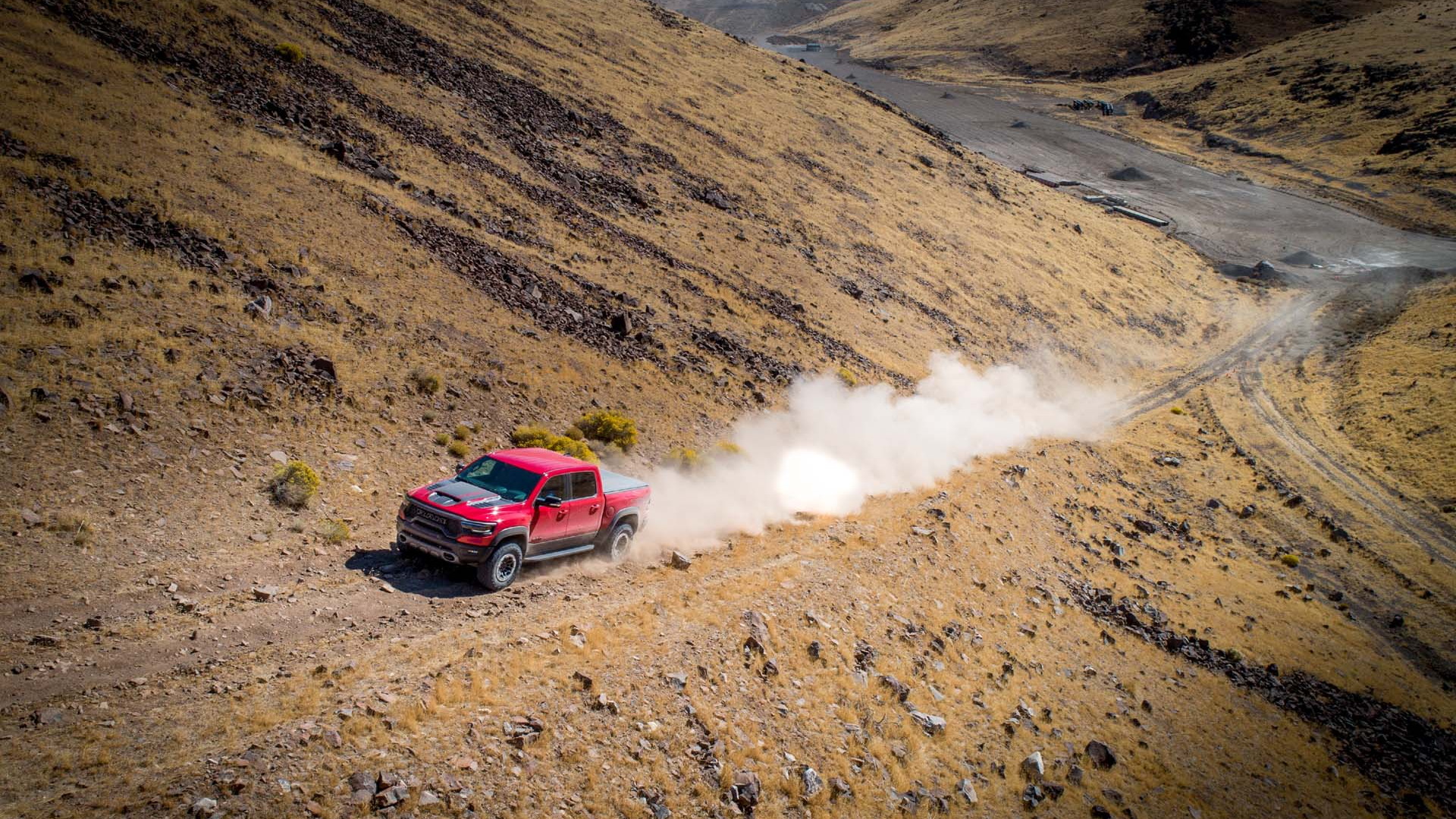 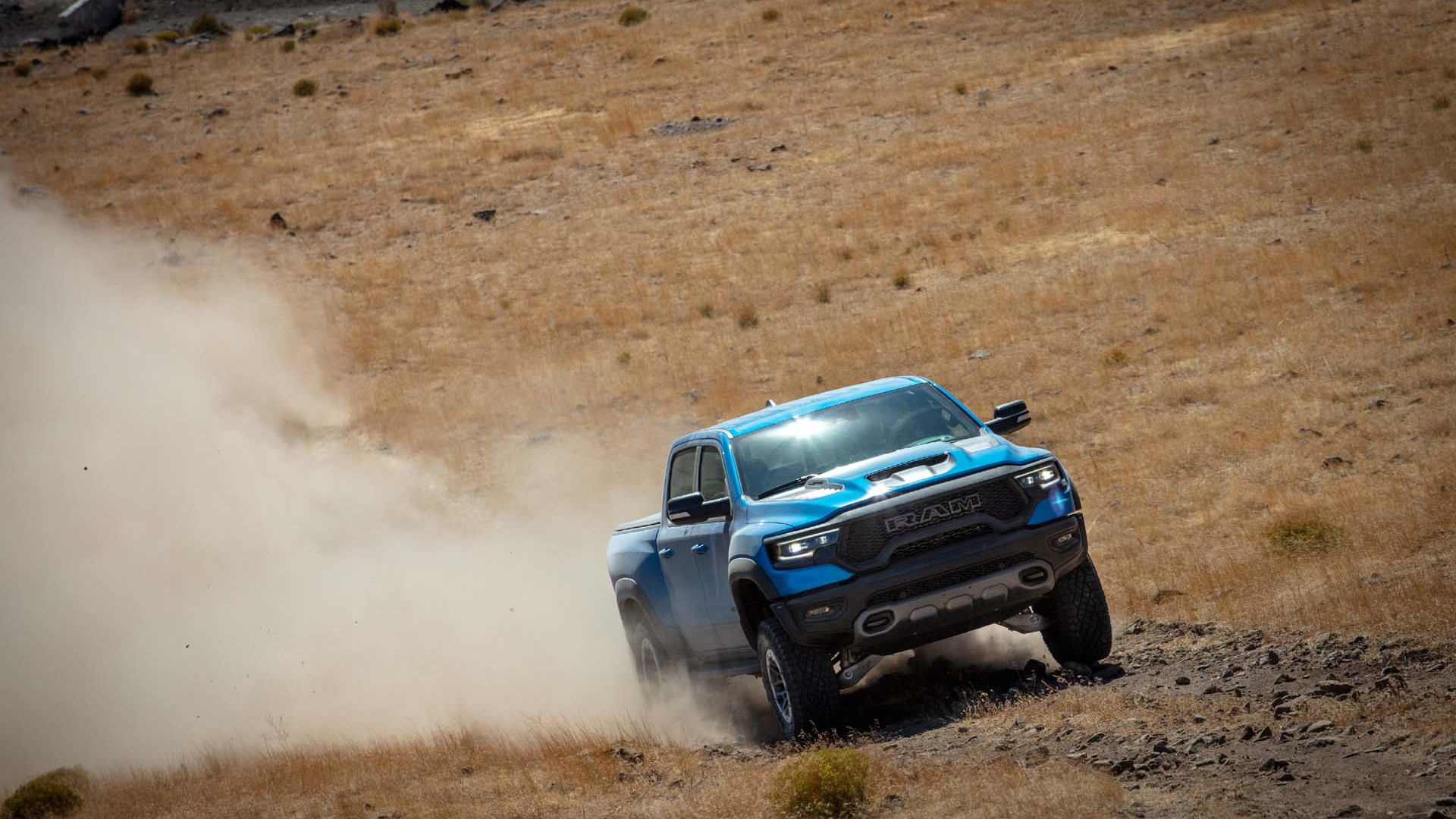 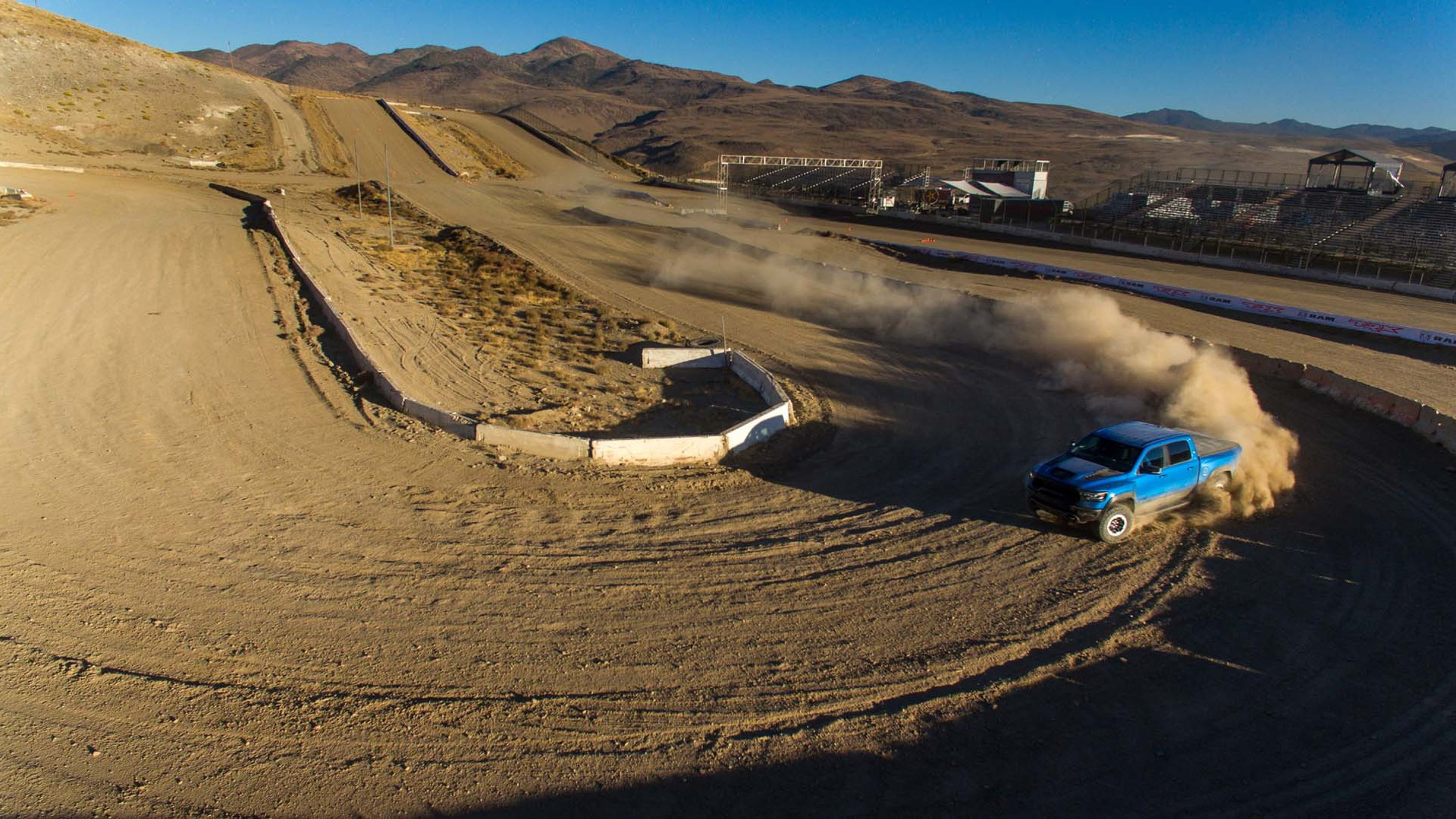 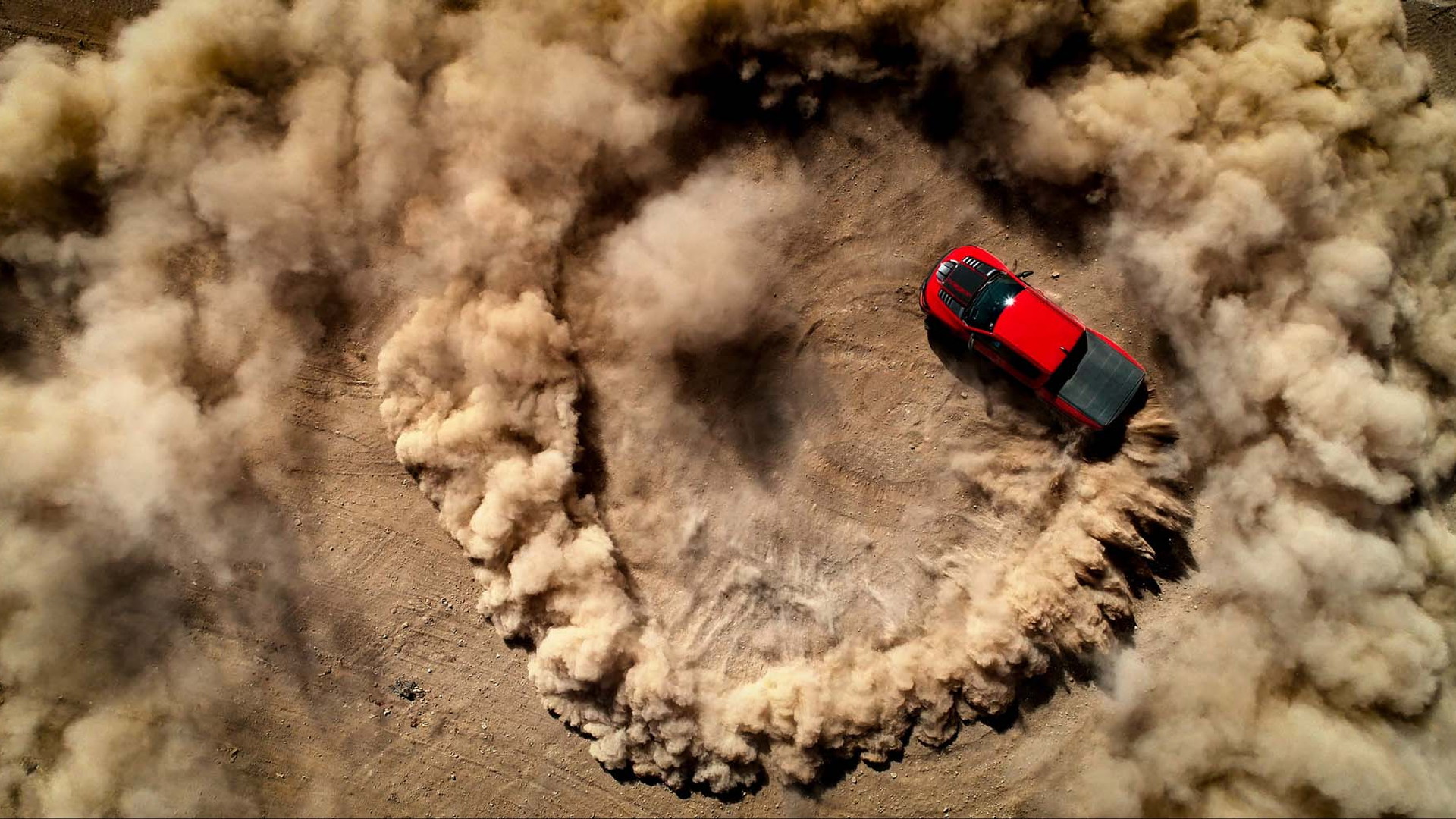 I’m nervous. Sitting behind the wheel of the new 2021 Ram 1500 TRX atop a 60 foot hill, I can hear my heartbeats thumping inside my helmet. The final directions from the instructor are ringing through my head. “...And you’re going to need to hit that ramp at 55 mph (points), to make it to the landing zone.” I’m trying to figure out how much airtime you’ll get hitting a ramp at 55 mph in a 6,000 pound-plus truck, but I get distracted wondering if the instructor sitting next to me is sure he wants to be inside the cab when that happens. Then halfway through the lap the ramp appears and it’s time to hit the gas.

Getting to 55 mph on any surface is easy for the TRX with its 702 horsepower, 650 pounds-feet of torque, and custom-designed Goodyear all-terrain tires. But it has so much grip on the loose track surface that I’m overshooting the speed target by about 5 mph when I hit the ramp and the world goes… quiet. No more engine noise, no tires scrabbling over dirt, no instructions from the instructor. Then the TRX lands as casually as if it were driving down a quiet street. Its calmness gets transferred to me and the fun really begins.

Ram’s new monster-truck-masquerading-as-production-vehicle gets the same 6.2-liter supercharged V-8 Hellcat engine sprinkled throughout FCA’s brands but this is a different sort of animal. The other vehicles are all designed to go fast on pavement, whether that be the track or the dragstrip. On the other hand, the TRX is built to go fast everywhere. That means the ability to go over 100 mph on pavement and on dirt and to do that requires so much more than just raw power.

The TRX goes far beyond what you get in the Ram 1500 Rebel. Upgrades include a brand new Bilstein Blackhawk e2 (e-squared) adaptive damper system, larger 15-inch brakes up front, Dana 60 rear axle, and the largest coil springs ever fitted to a full-size pickup truck over the rear wheels. Lots of work has also been done on the frame, 74% of which has been either enhanced with stronger steel or had new pieces installed for added strength over the regular 1500. Even the 35-inch all-terrain tires were developed specifically for the TRX by Goodyear and have the highest top speed of any all-terrain tire at 118 mph.

The TRX is also significantly larger than the other 1500 models; it’s a full 8-inches wider thanks to widened axles and sits two inches higher for added ground clearance. All of that frame reinforcement also adds about 600 pounds compared to a Ram 1500 Rebel with the 5.7-liter V-8. TRX tips the scales at 6,350 pounds.

On pavement, the TRX’s heft is readily apparent. It felt in some ways like driving one of Ram’s heavy duty 2500 or 3500 trucks, rather than a 1500 variant. The added ride height doesn’t just make it harder to scramble up into the cab (not to mention load things into the bed), it makes the center of gravity higher and that weight is felt in the corners. Though the suspension does a good job of keeping things tidy and the TRX never feels out of control, I felt it fighting against physics taking any turn at speed.

On a lighter note, the engine is more than a match for all that weight. It launches from 0-60 mph in just 4.5 seconds and launch control works on gravel as well as on concrete. (It’s the only truck I’ve tested with launch control.) Ram also did something smart with the TRX’s pedal feel. The first half of the pedal’s travel is quite tame in an effort to make it feel more docile, so even in Sport mode it’s easy to drive the truck slowly and it never lurches. But the instant you want to hear that supercharger whine and really get going, pushing the pedal further provides instant haste. Jumping from 20-40 mph doesn’t bring the same thrill that 0-20 mph does, the truck’s head snapping acceleration gets dulled at speed in part due to the adaptive suspension’s proficiency at keeping the truck balanced.

Even fitted with an aggressive all-terrain tire, the ride quality in the TRX feels smooth and the cabin remains rather quiet. Semi trucks with chains on the tires have chewed up the right lanes of the highways around Lake Tahoe, but even on those pockmarked roads the TRX was tranquil. If anything, I could have used more exhaust note, but the TRX impressively retained the luxury feel that you get in higher Ram 1500 trim levels.

The afternoon portion of the drive took place at an off-road facility, complete with a dirt track, off-road course, and a steep rock crawling section. On the dirt track with jumps, loose surfaces, elevation changes, and even a whoop section (like moguls on ski runs), the TRX felt right at home. Those massive rear springs that enable up to 14 inches of rear suspension travel means the suspension didn’t come close to bottoming out. From the driver’s seat the TRX felt isolated from what I’m sure were hard hits, providing even more confidence for the next approaching obstacle.

I understood the appeal of the Hellcat engine more on the track than the street. It’s enough power for the TRX to feel like it will never get bogged down in dirt of any kind and this sensation is especially charming in turns. I approached the course’s hairpins with some abandon, knowing that I could get the TRX to begin to slide and depend on the throttle to save me, simply mashing on the gas to get the rear end to rotate and power the truck in the right direction with sprays of dirt flying out the back.

After some hot laps, I felt that I wasn’t getting as much out of the truck as it had to offer, so I enlisted Chris Winkler, SRT Vehicle Dynamics engineer, to take me for a spin around the track. Chris did much of the test driving for the TRX’s development and the first thing he did was take the traction control all the way off. He took the truck to another level, jumping the truck 20-30 feet further than I was able to and even hitting some smaller jumps sideways to slide the truck into the next corner.

While the TRX’s prodigious power came in handy while flying around a dirt track, I was in some ways more curious to see how it handled rock crawling, where throttle dexterity and the ability to control the power to climb (rather than fly) over obstacles is the name of the game. Much like its surprisingly docile nature on the street, the TRX’s power output was easy to control in 4WD low and the truck’s Rock drive mode. Visibility to the truck’s outsides is quite bad; that large hood (with an added scoop) and ride height make it hard to see what’s around you. Though the camera system now offers multiple front and rear views, I was more thankful for the crew of spotters that helped get me up the hill.

The Price of Power

As fun as the TRX is, especially once the road ends, it’s impossible to escape its price tag–both at the dealership and at the pump. Fuel economy ratings for the TRX are estimated at 10 mpg city, 14 highway, 12 combined and the truck requires premium gasoline as well.

The TRX’s price tag is also high, starting at $71,890 (including a $1,895 destination charge). Ram eagerly points out that this puts it around the average transaction price of a Ford Raptor, but that is for a Raptor with some options not a base model. My test vehicle included the TR2 ($7,920) options package and a host of other optional equipment which drove its sticker all the way to $89,960. The base TRX comes with the 12.1-inch multimedia screen, but it also has cloth seating, a lack of advanced safety features, and no heated front seats or steering wheel. I don’t see many folks opting for anything near a base version of this truck, and with a large catalog of available Mopar accessories you can punch it up to near six figures.

Though the engine snags all of the headlines, it was the other parts of the TRX that impressed me more. This is similar to the experience I had with the Dodge Charger Hellcat. Dodge would come to release a widebody version of the Charger that came with the same suspension, braking, and handling upgrades found on the Hellcat–just with 500 horsepower instead of 700. I had 90% of the fun for about 70% of the price and I have a sneaking suspicion that the same might be true of the TRX, perhaps with the 6.4-liter V-8 instead of the Hellcat engine. And for me, that theoretical truck might be Goldilocks (and much easier on the wallet).

In the meantime however, if you want to have the baddest, swaggeriest, hairiest-chested truck around, the Ram 1500 TRX fills that role with aplomb. It turns out 702 horsepower is fun in pretty much any incarnation, and the TRX’s performance lives up to its supertruck billing. Just be prepared to pay for the privilege.

Ram provided several Ram 1500 TRXs, a hotel room, and an off-road park for Internet Brands Automotive to bring you this firsthand report.