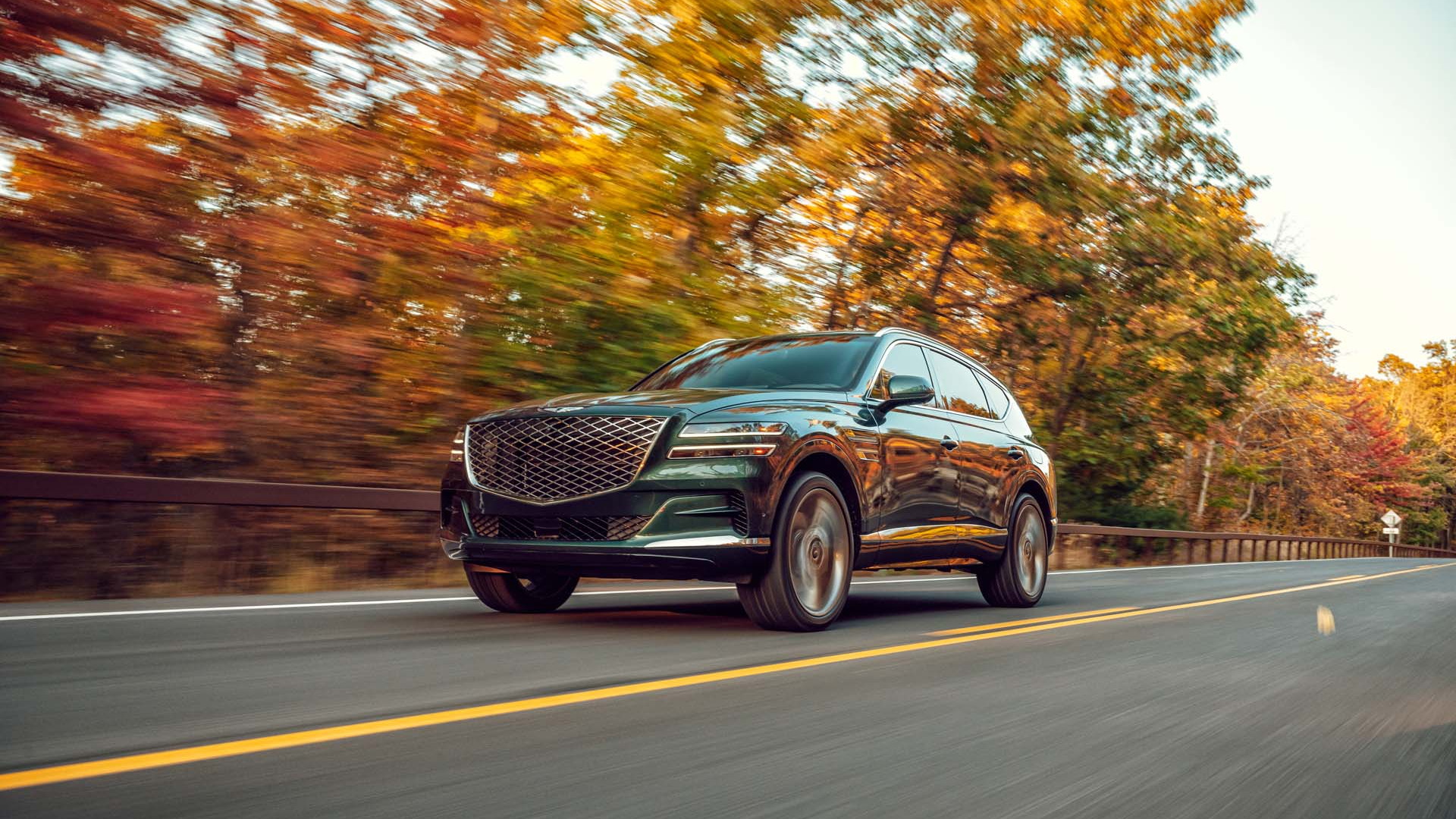 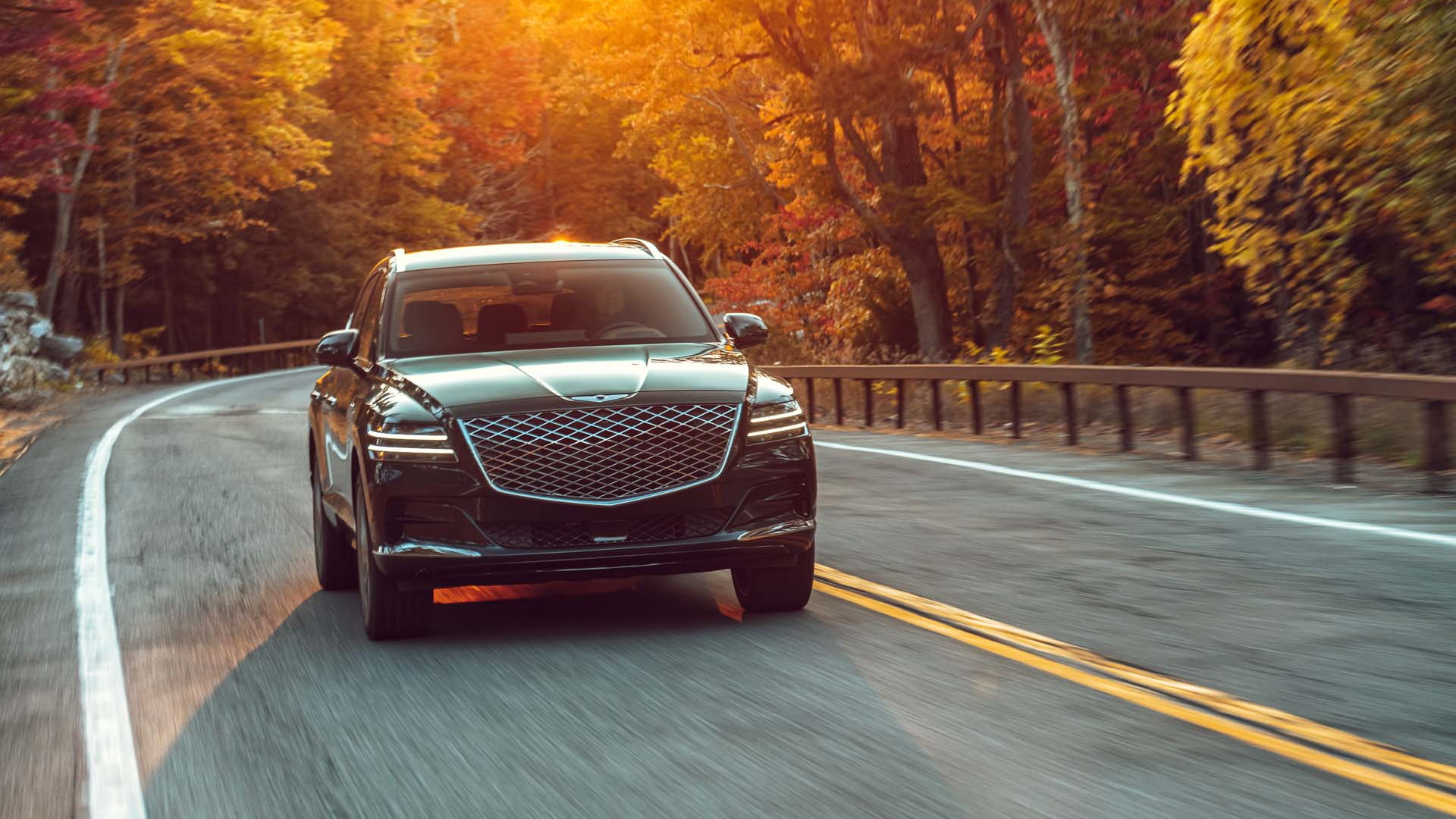 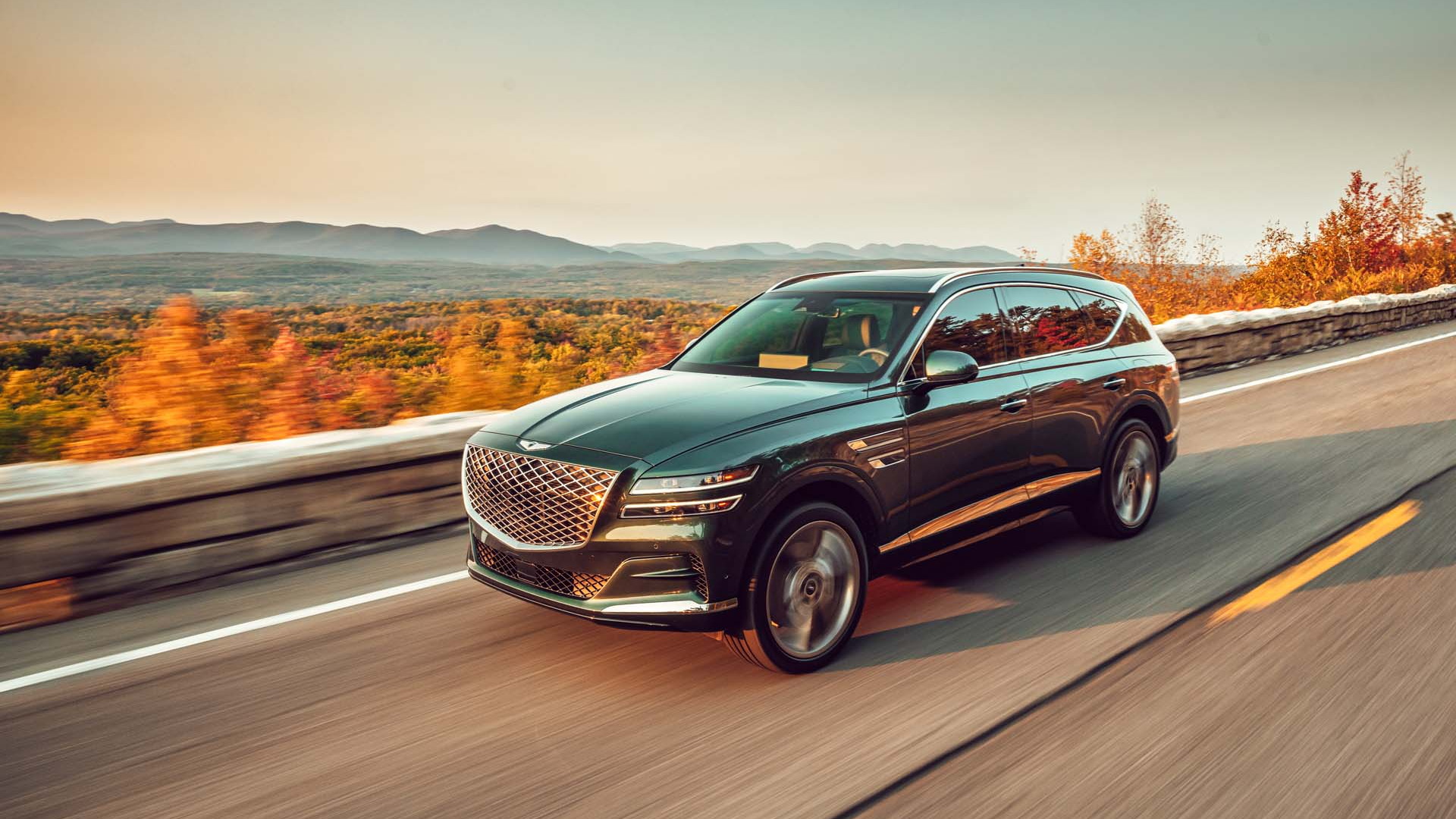 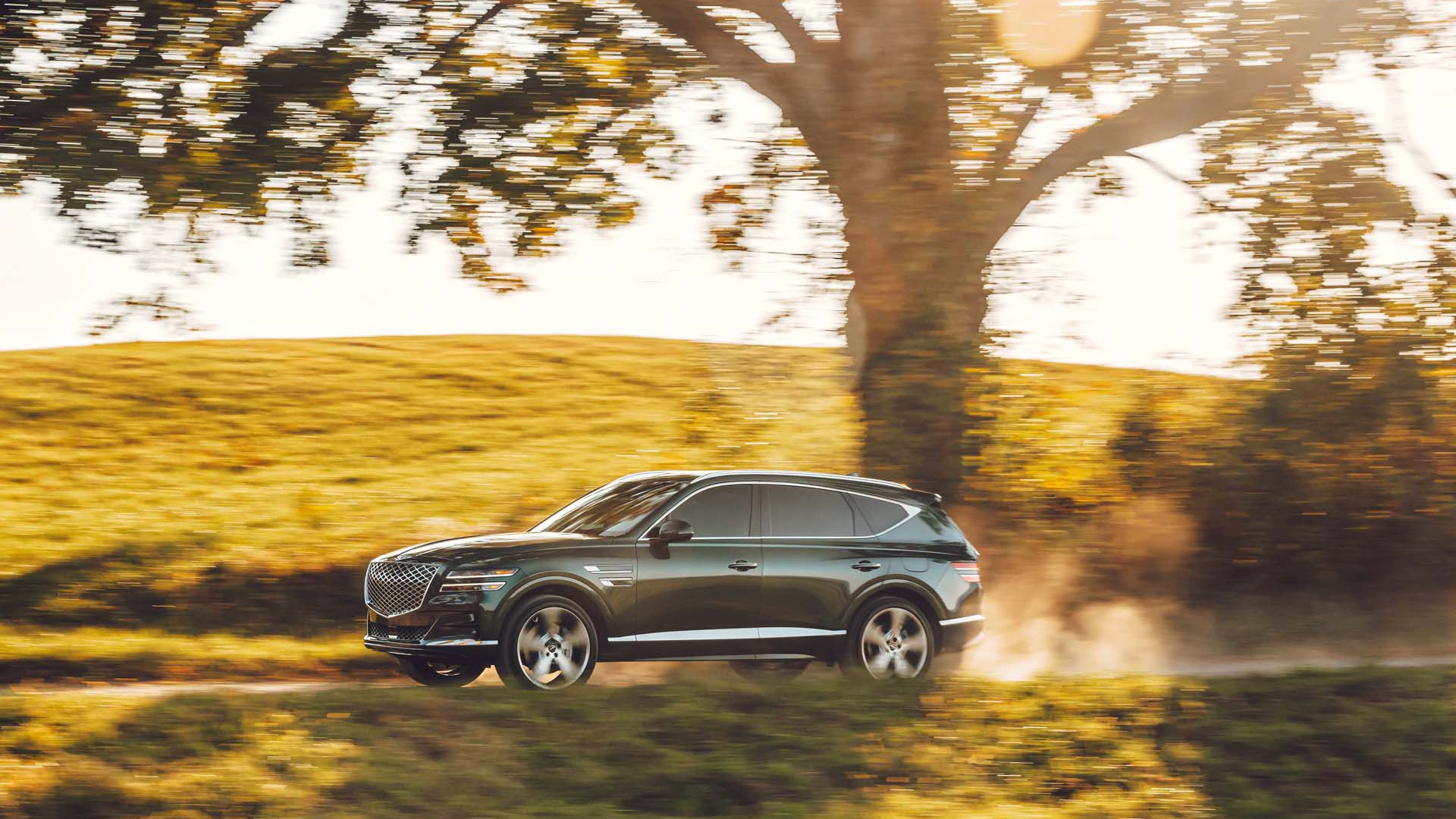 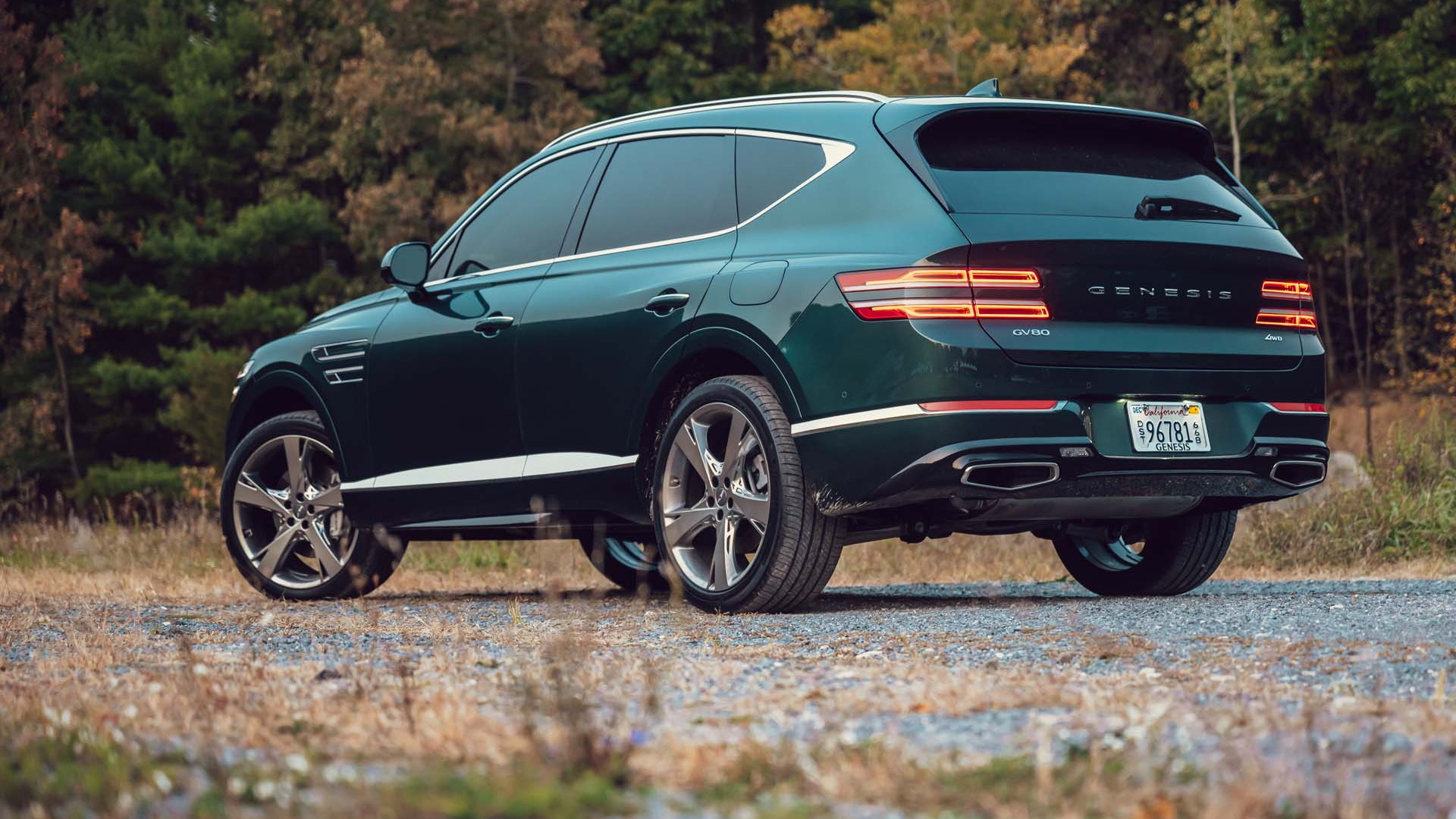 Approaching a row of 2021 Genesis GV80 mid-size crossovers along a Manhattan street, my first impression was that it’s one of the few genuinely handsome SUVs on the market. On Genesis sedans, especially the flagship G90, the brand’s shield-shaped grille comes off as so large it’s cartoonish. On the new GV80, the taller front end keeps it in better proportion.

To my eyes, however, it’s the GV80’s rear that’s truly handsome. A tapering roofline and notched tailgate give it the proportions of a tall but sleek wagon, dispensing with the vertical slab of tailgate that makes some luxury SUVs resemble pricey delivery vans. It’s a hard trick to pull off, and the Genesis designers nailed it. The wheels—in 19-, 20-, and 22-inch sizes—are well proportioned and elegant without being flashy.

Aside from its handsome exterior, the GV80’s quiet, elegant cabin will be one of its most effective selling points. I drove two GV80s and both test vehicles had beige interiors, but their perforated and stitched leatherette contrasted with a warm brown-gray dash and subtle accents in brushed silver to eliminate any thought of “beige” being a bad thing. Thankfully, Genesis has kept its obligatory piano-black glossy surfaces to a discreet minimum.

The GV80’s controls seal the deal, specifically the substantial metal switches and levers, some with an elegant knurled texture, and crystal insets in the console-mounted rotary drive selector and multimedia controller dial. The attention to detail even extends to the cargo bay, where a pair of buttons to lower the powered second row sit within their own knurled metal trim ring. Other luxury makers make do with black plastic; that one control underscores the Korean brand’s attention to detail.

Mid-size luxury SUVs are the de facto transport for upper-end families, and the GV80’s second row offers substantial leg room and head room for even the gangliest of teenagers. However, only a single trim level, just below the top of the line, includes a third seating row. I didn’t test that version, and I can’t report on the size of the load bay yet as that spec is still being finalized, but it does appear competitively sized.

The GV80 has a few interior features that delight and others that don’t. The standard Lexicon 14-channel, 1,050-watt audio system plays through 21 speakers, including under-seat subwoofers. The sound is impressive, rich and textured, aided by the largely hushed interior. The sounds of nature can be played throught the audio system and accessed through the infotainment system; available sounds include crashing waves, raindrops, and a crackling fireplace. This feature can be soothing after a tough day.

The infotainment interface isn’t so soothing. It looks elegant but I found it unintuitive, which is disappointing given Hyundai Motor Company’s general excellence in infotainment interfaces. The round dial acts like a mouse most of the time, except when it doesn’t and a button is needed instead. The menu layout and nesting require thought to work out, and if I counted right, it takes four separate actions to cancel a navigation route versus the best practice of just two. Plus the dash-mounted touchscreen sits too far away to tap easily.

I also didn’t like the thick steering wheel hub. With multiple controls on top and an airbag underneath, most wheel hubs are big these days. However, they usually aren't so thick that 9-and-3 driving is impossible. This one is. Why?

A pair of turbos

On the road, the turbo-4 is adequately powerful (and will likely be the same when loaded with family and gear), but it proved noisy when asked to work hard, as I frequently did. The optional V-6 has substantial power and delivers it more quietly—at the cost of some turbo lag. Accelerating produces little effect for most of a second while engine speed rises and the transmission downshifts. Then the V-6 GV80 surges forward in a most satisfying way.

I’d likely stick with the turbo-4, which achieves better combined fuel economy (23 mpg in RWD, 22 mpg with AWD, according to the EPA) than the V-6, which is offered only with AWD and rated at 20 mpg combined.

Because the GV80 is built on an adaptation of the G80 mid-size sedan’s rear-wheel-drive platform, I had high hopes for its handling and road holding. Both the compact G70 and the midsize G80 sedans mix sporty handling and a smooth ride in an appealing way, but the GV80 needs another round of tuning to reach their level.

In the Normal drive mode, my GV80 testers with their 20-inch tires felt tuned for smoothness; Sport mode tightens suspension responses and adds road feel to the steering, which gave the impression of being noisier. I longed for a setting exactly halfway between the two: less wallow than Normal, but smoother than Sport. It’s far from a major drawback, but I’m betting Genesis engineers will continue to work on the GV80's suspension settings.

Like its mass-market sibling brands, Hyundai and Kia, Genesis represents a substantial value for the money. It’s the Lexus playbook from 30 years ago, and Genesis appears to have studied hard.

The GV80 includes a substantial list of standard features and equipment, from luxury accessories to active-safety features. Notable items include a segment-first center airbag between the front seats, and the world’s first road active-noise cancellation, which “listens” in real time to road noise and broadcasts anti-sound into the cabin to eliminate it.

Genesis is to be complimented for creating its own, appealing definition of automotive luxury. Audi, BMW, and Mercedes-Benz offer variants of black interiors and cutting-edge technology, and Lexus has lately veered into unusual sculpting and a few questionable materials. Only Volvo has carved a new path, mixing clean modern Scandinavian design with top-end materials and safety.

Now Genesis has found a path somewhere near Volvo’s, with jewel-like finishes and elegant materials like quilted leather. With a handsome exterior and elegant cabin, and a good value-for-money proposition, I expect Genesis’ first SUV to do well in a crucial and growing market segment against more-established luxury rivals.

Genesis provided a day in a pair of 2021 GV80s for Internet Brands Automotive to bring you this firsthand report.