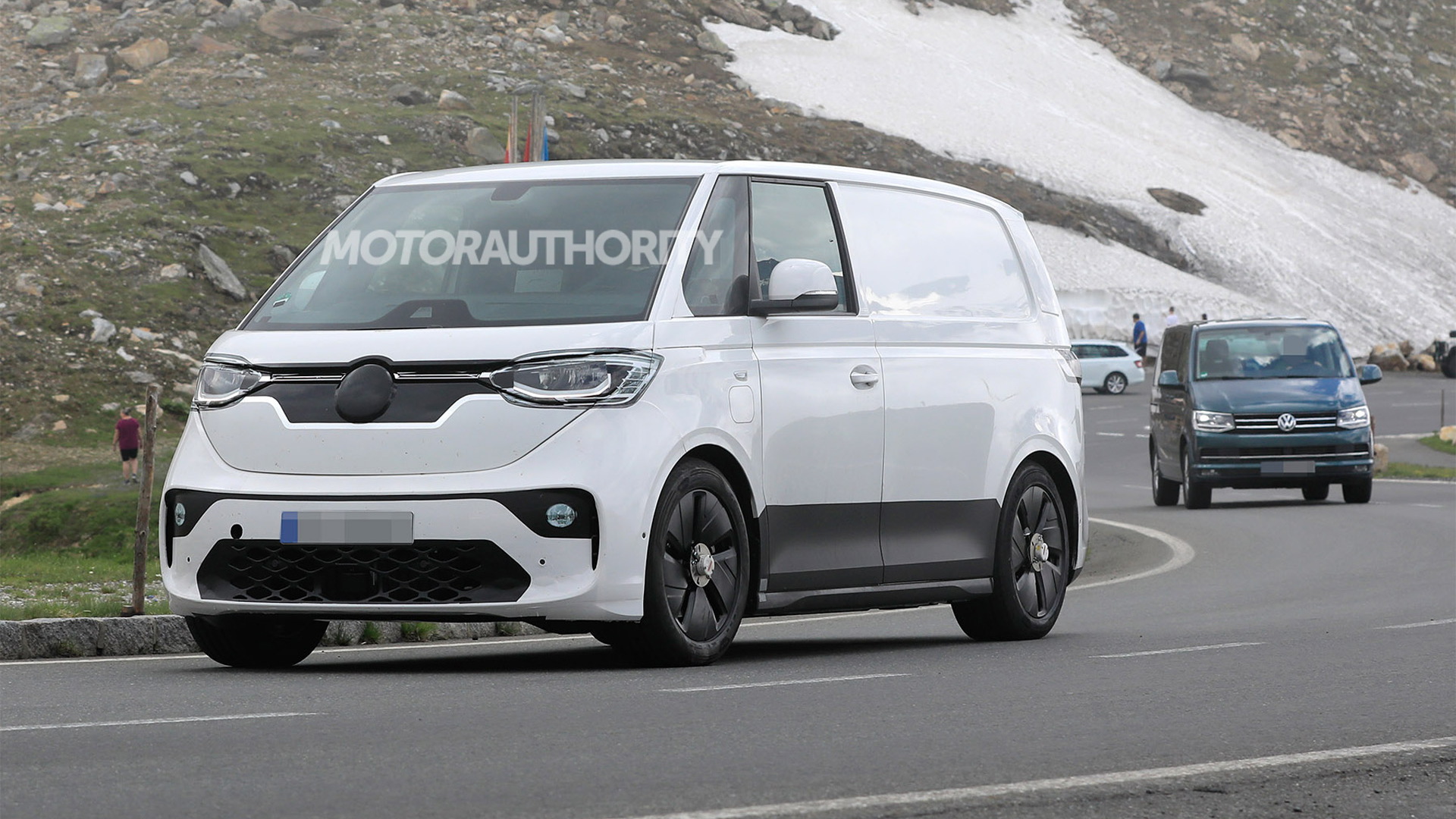 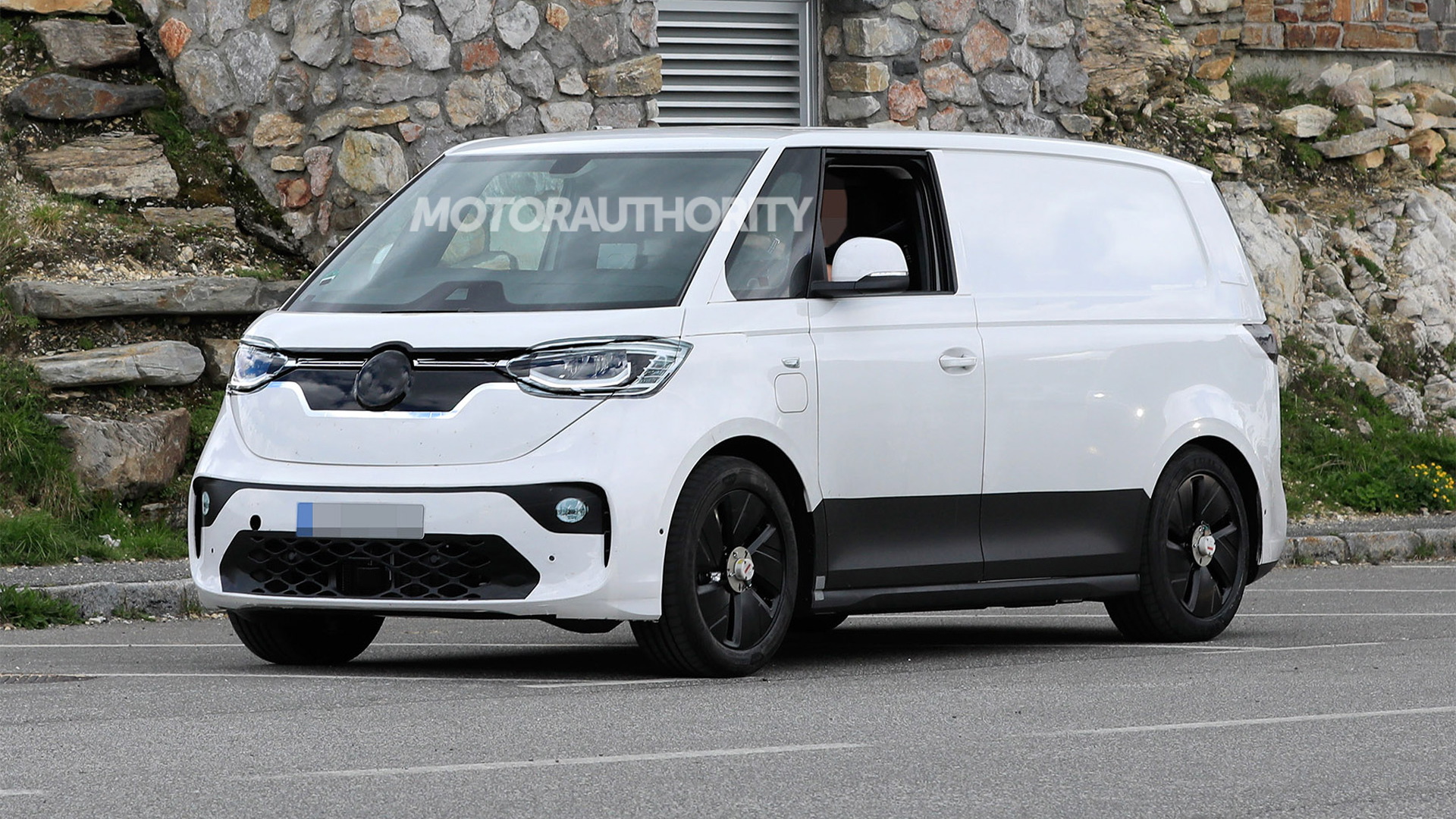 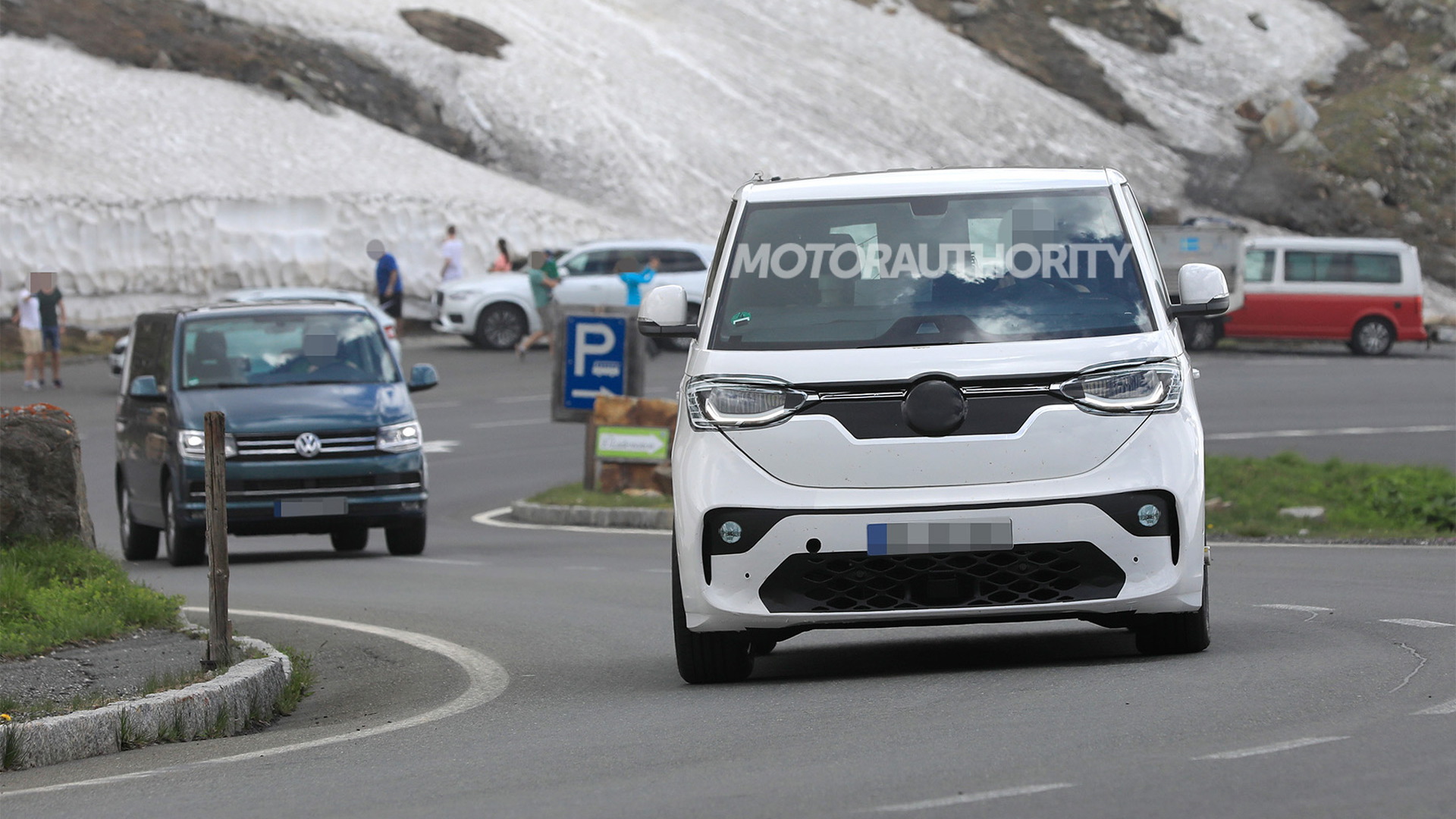 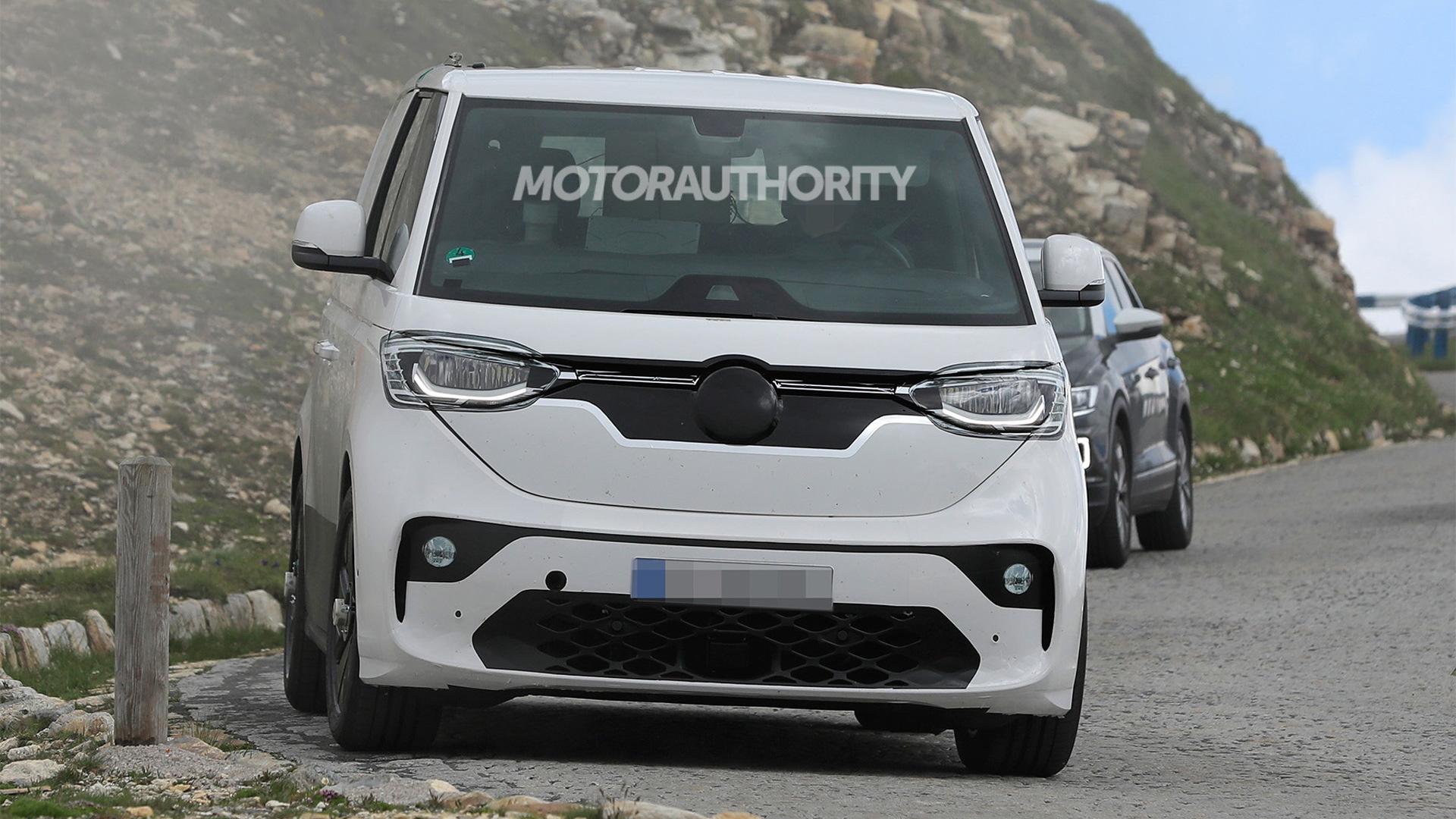 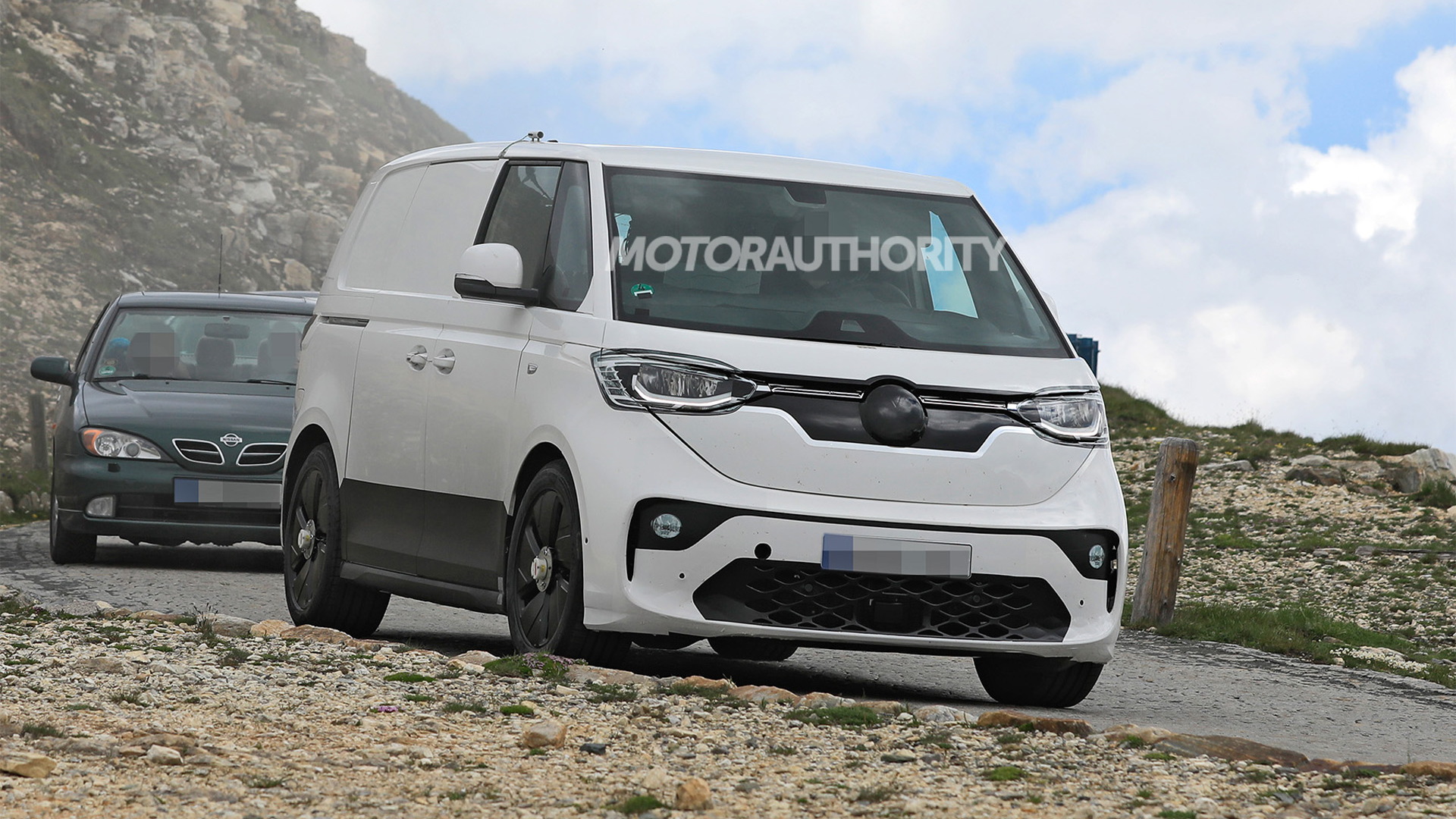 Volkswagen's electric successor to the iconic Microbus, which was previewed by 2017's ID Buzz concept vehicle, has been spotted testing in prototype form (earlier shots showed a test mule).

The prototypes are barely disguised, but some finer details like the lights are camouflaged by stickers. There are also fake elements attached to the front to hide the true design of the vehicle's face.

Some of our spy shots also show a T6-generation VW Transporter/Multivan. We can see that the ID Buzz is wider and lower than the T6 van. It's hard to compare the wheelbase, but we know the ID Buzz will have two wheelbase options, with the United States expected to receive the longer version as standard.

We also know that both passenger and commercial versions are planned, the latter previewed by 2018's ID Buzz Cargo concept. The U.S. is only expected to receive the passenger version, however.

The final design should resemble the design shown in a teaser sketch of a self-driving ID Buzz (shown below) that's slated to enter a commercial taxi service in 2025. The service will be run by Volkswagen Group's Moia mobility division using a self-driving system developed by Argo AI, which VW Group is a major shareholder of.

The ID Buzz, which will likely be called something along the lines of ID.7 or ID.8 in production guise, is due to start sales in Europe in 2022. It won't reach the United States until 2023, meaning it will likely arrive as a 2024 model. That's a year later than originally promised.

VW has hinted at a modern Bus for years. In fact, the automaker rolled out the first concept for one as far back as 2001. Now production is finally happening. The production will be handled at a VW Group plant in Hanover, Germany, which is being upgraded to handle electric vehicles. The plant is where VW currently builds its T-series van, the true successor to the Microbus.

The T-series in June spawned the new T7 generation in passenger-oriented Multivan guise. The T7 van, which is based on VW Group's MQB platform, will be sold alongside the ID Buzz. The ID Buzz rides on VW Group's MEB battery-electric platform.

Look for a base model with around 201 hp and rear-wheel drive. Above this should sit a 302-hp model with a dual-motor all-wheel-drive system. The biggest battery option should offer close to 300 miles of range.