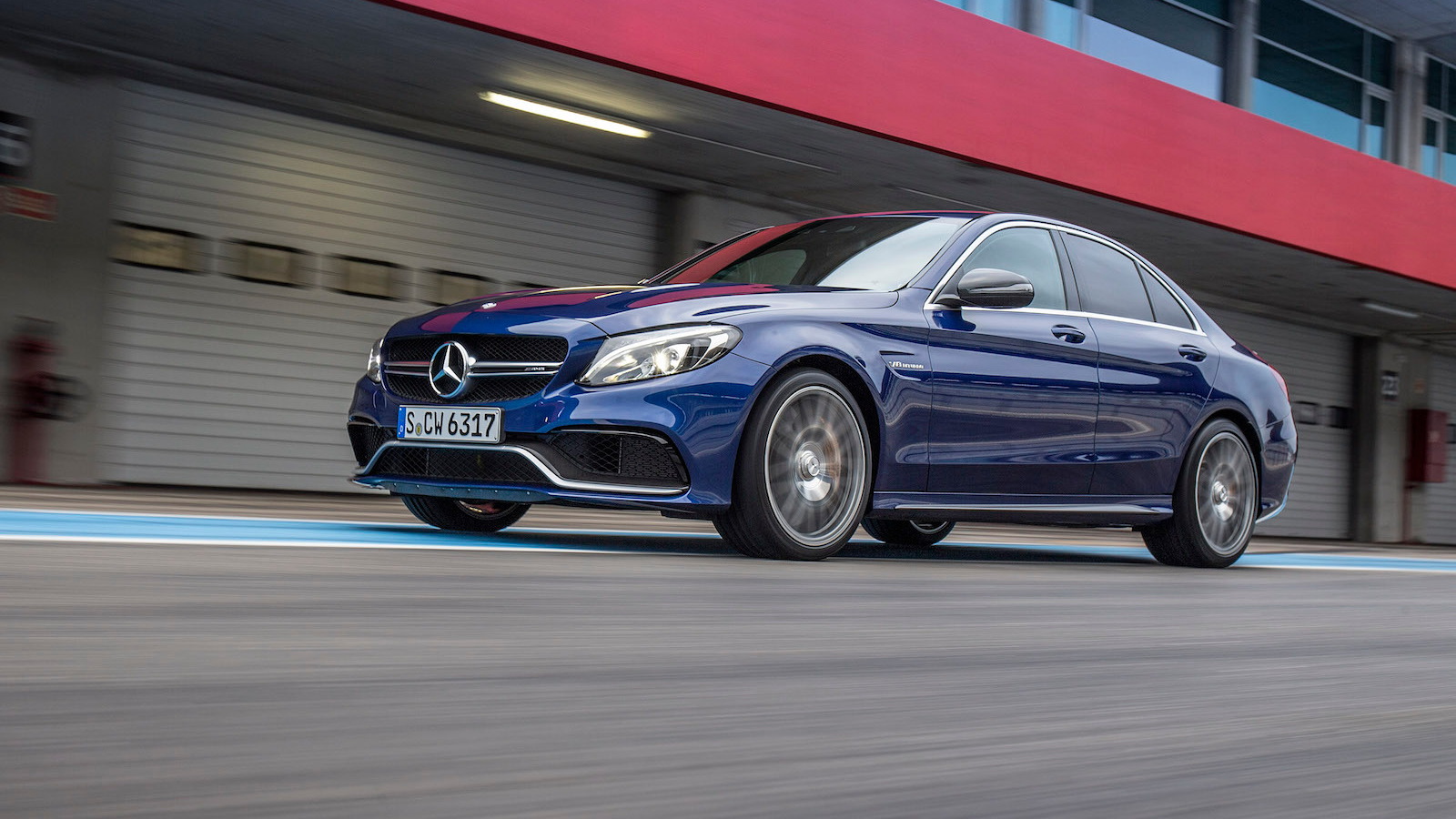 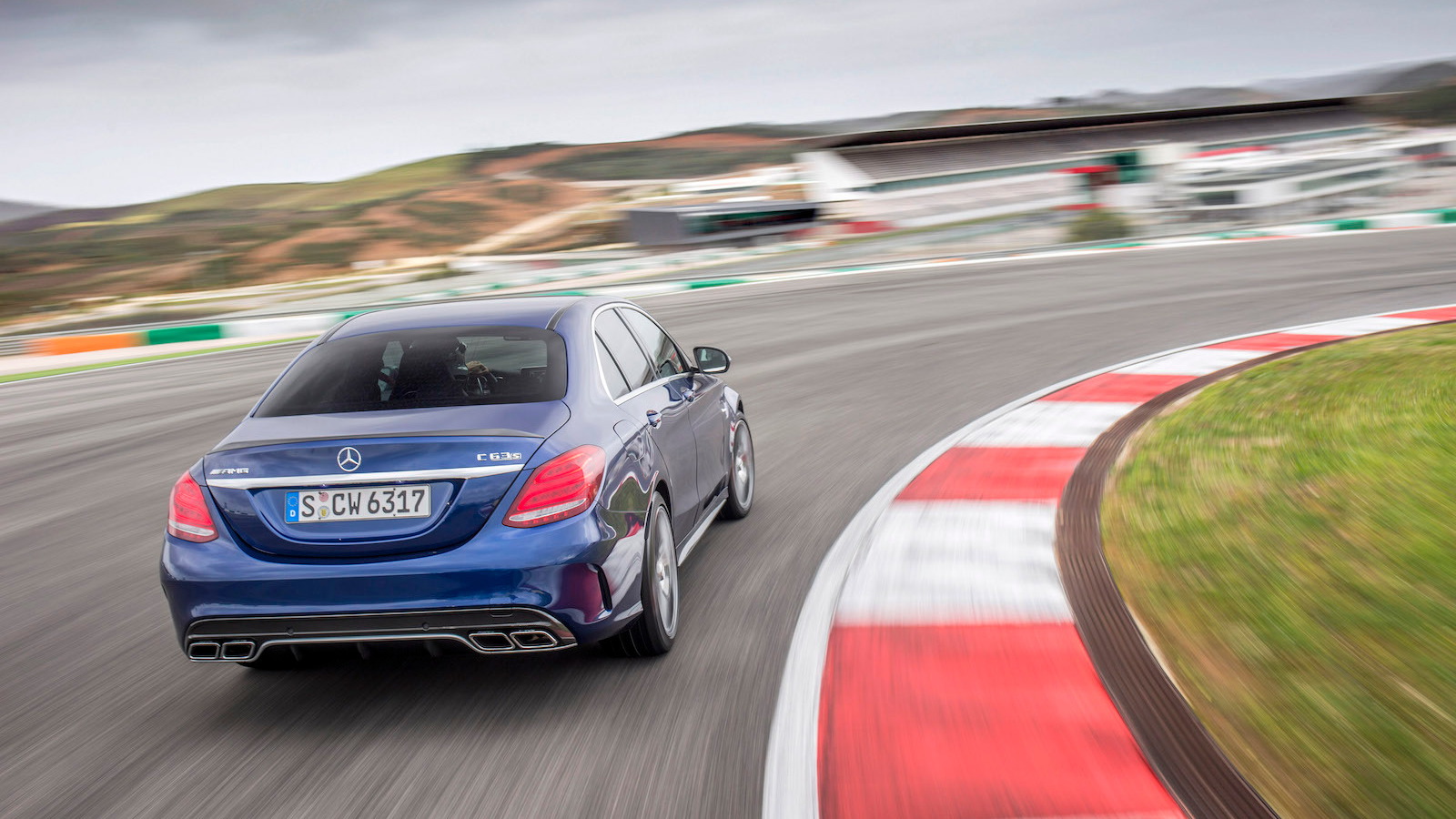 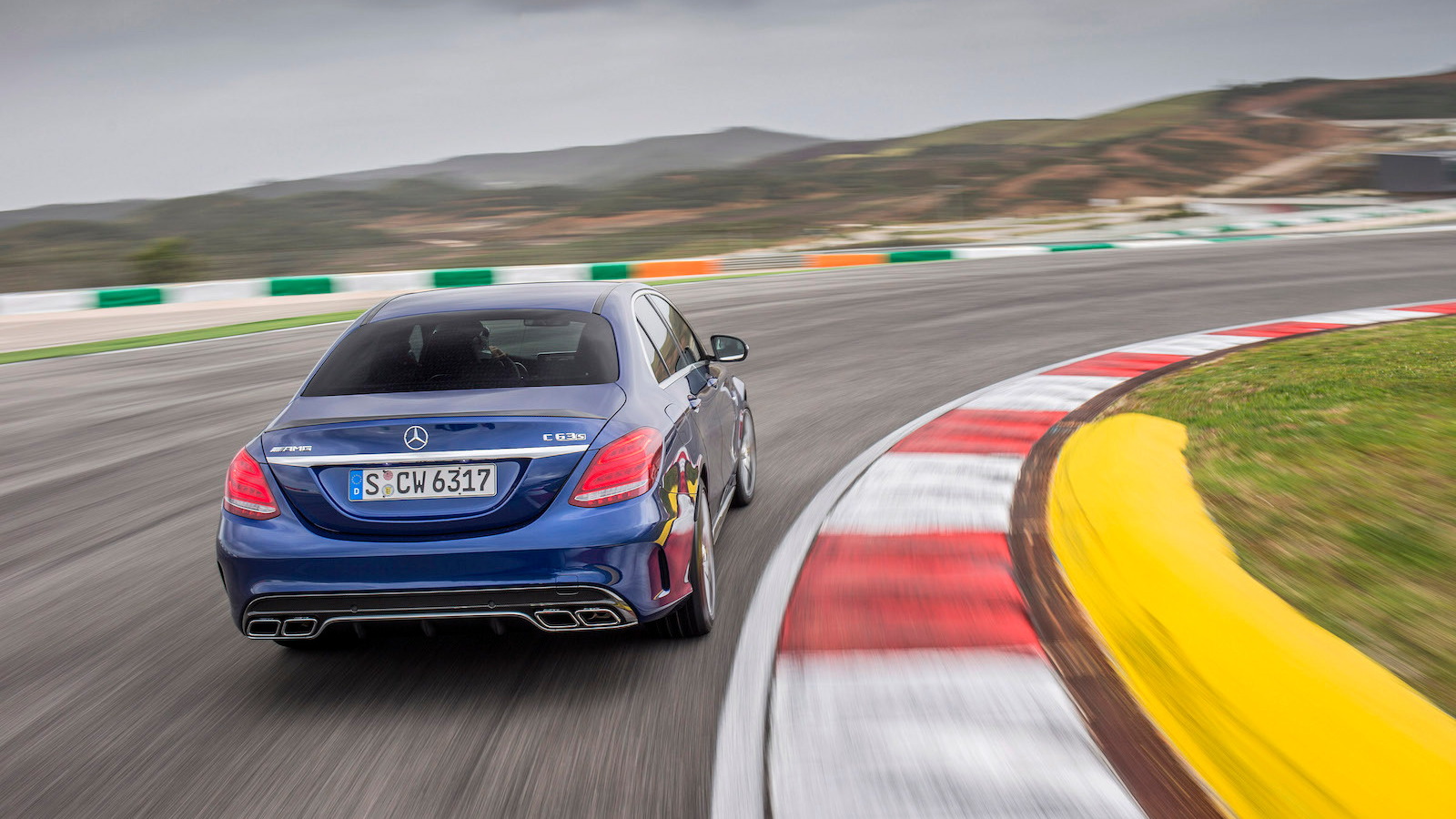 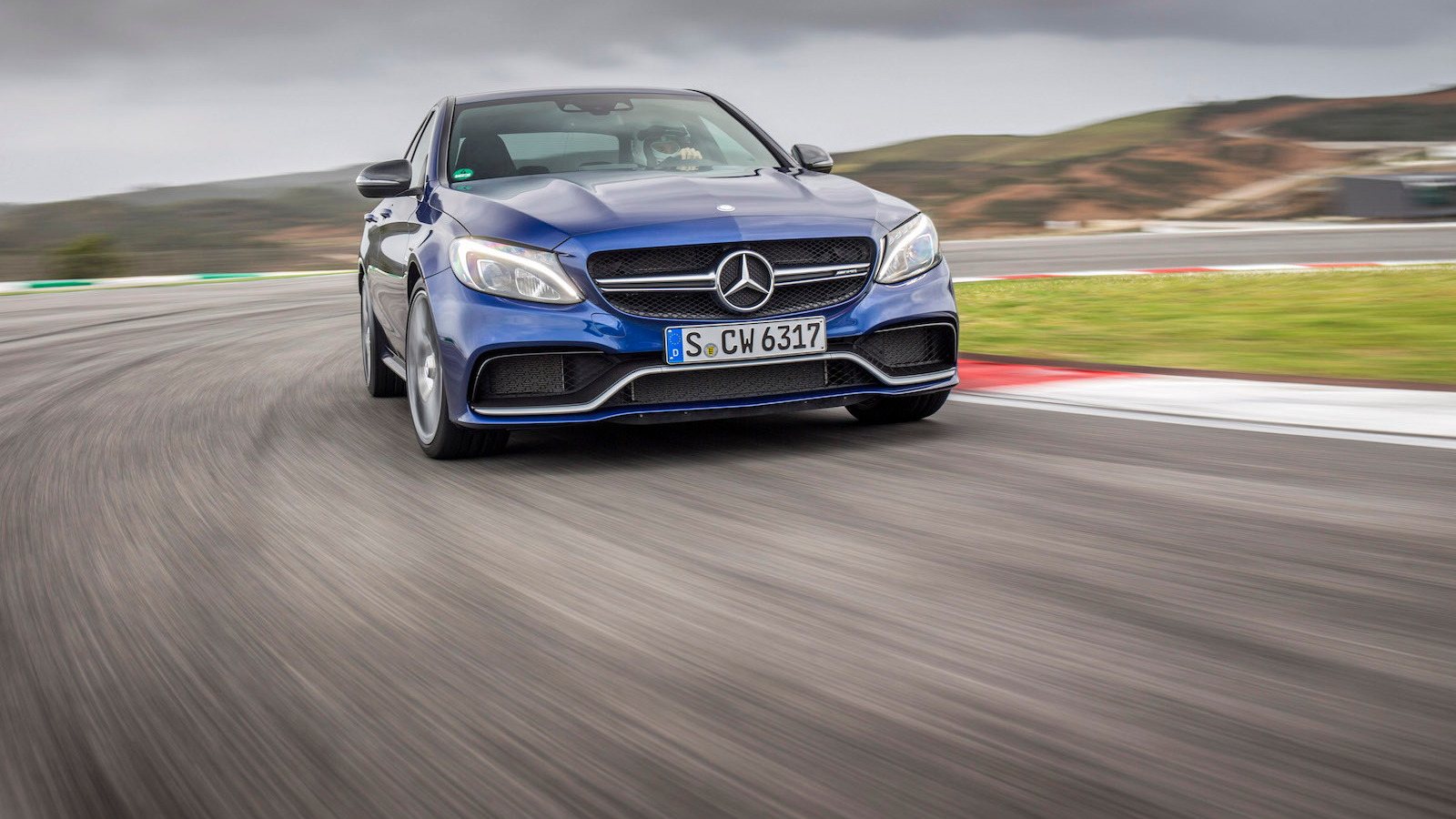 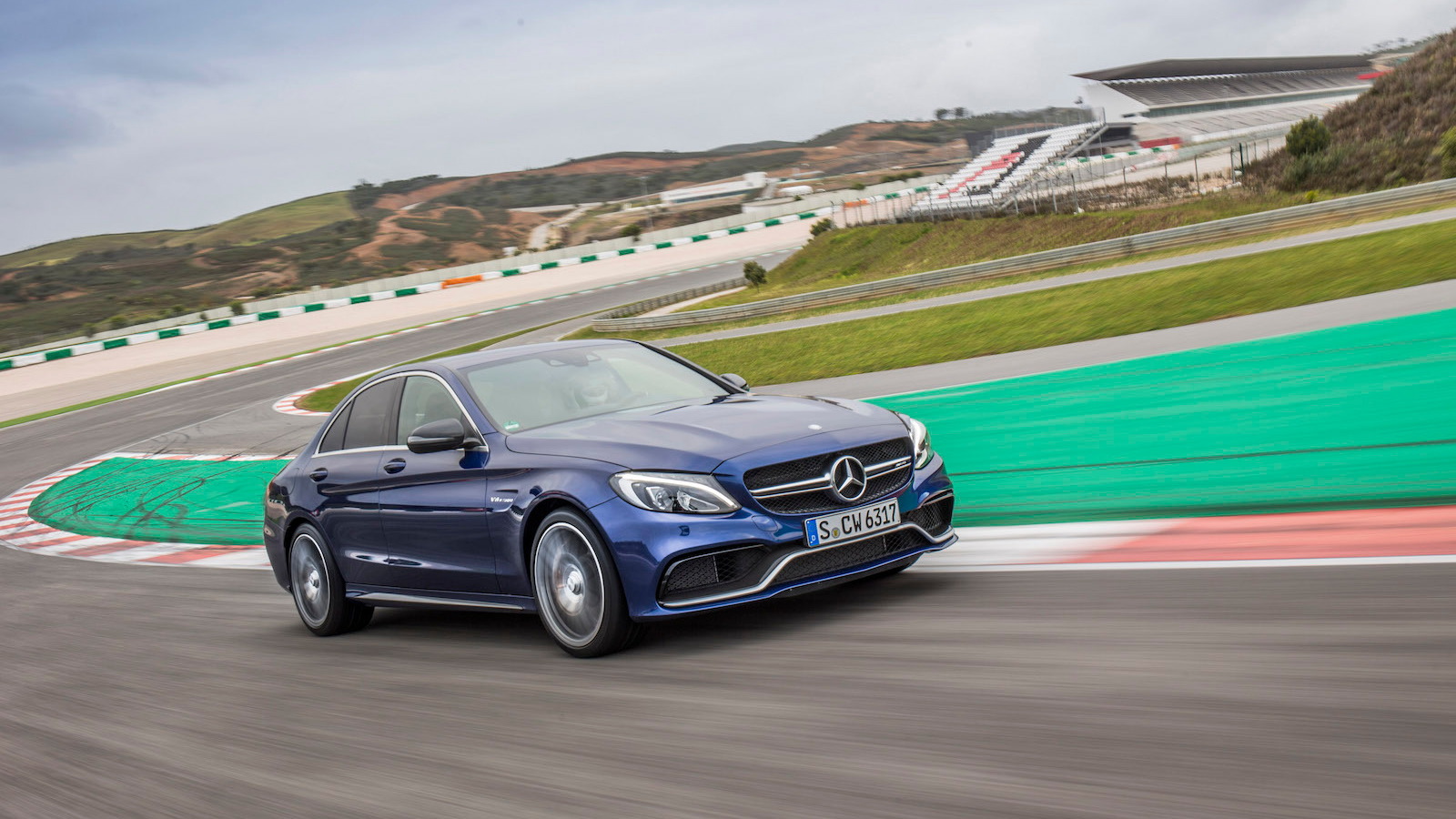 The whole world seems to be going turbo. That’s mostly a good thing.

In the case of the Mercedes-AMG C63 S, it’s a very good thing.

While it’s impossible not to love the 6.2-liter M156 V-8 that powered the last C63 AMG, the new M177 4.0-liter twin-turbo V-8 is a worthy successor, packing up to 503 horsepower and sharing much of its makeup with the M178 engine found in the brilliant Mercedes-AMG GT and GT S.

In the C63 and C63 S, the engine does all the right things it does in its two-door alter ego: provides immediate thrust at nearly any RPM, keeps pulling right up to redline, and makes delicious—if slightly muted—sounds.

Paired with the smart and crisp AMG Speedshift MCT seven-speed automatic transmission, the engine truly brings the AMG-adulterated C-Class platform to life, leaving the car and driver both yearning for the next curve, the next straight, the next apex.

When it comes down to it, a performance sedan of the Mercedes-AMG C63’s caliber needs to be able to deliver on track; the BMW M3 and M4 duo certainly do, and the Cadillac ATS-V looks like it might just be the overdog. Audi’s S4 may do some battle with the base C63 (non-S-model), but it doesn’t really have a contender without an RS 4.

Comparing the C63 S to its nearest natural competitor, the BMW M3, is perhaps one of the most enlightening revelations for the brand-agnostic performance enthusiast: where once the BMW would have had the superior ride quality, steering feel, and sport seats, the pendulum has swung completely to Mercedes-AMG’s side.

Where the BMW feels leaden and lifeless (read: anything below about 100 mph), the C63 S feels lithe and limber. Above 100 mph, both cars are a joy to drive, but the BMW still feels more like a surgeon’s laser scalpel, while the C63 S is a back-alley switchblade—in hoonistic respects, at least.

Turn in and the front end grips—despite what ultimately felt like a lack of tire, I never experienced any chassis-based understeer. Driver error can still induce some, but a quick dab of throttle or a more carefully trailed brake will repair the widened arc, thanks to the car’s surprisingly refined and progressive behavior at the limit.

With the AMG Dynamic Select system in Race mode (or a well-configured Individual setting), and Sport Handling mode engaged by a single press of the traction control button, the C63 S willingly hangs its tail out at a few degrees of drift, allowing the driver to keep their foot in it when getting out of corners, complementing the trailbrake-ability and offering tantalizing hints at zero-steer possibilities.

As for quibbles, there are only two, and they’re related. Fitted with relatively narrow tires, the powerful sedan feels like it’s just a bit short of the grip the chassis could use at the limit. That slight shortfall of grip also reveals itself under braking, where the front doesn’t bite quite as hard as I’d like even with the carbon ceramic brakes. That slight lack of grip is, ultimately, a well-tuned choice, however, encouraging the driver to approach or even slightly exceed the limit, communicating exactly where that line lies.

On track, the C63 S is a car that will engage, thrill, and, for the dedicated, allow room to grow as a driver.

Driving through the beautiful Algarve countryside, its mix of rolling hills and sweeping ocean vistas flashing between the famous cork trees, it would be easy to let the golden hue of happiness add its glow to whatever the rental agency offered, much less the new Mercedes-AMG C63.

But the C63 needs none of the frippery. It is its own European paradise.

From the comfortable and spacious seating to the capable and straightforward COMAND infotainment system, the C63 and C63 S are, in normal circumstances, among the best of Mercedes-Benz’s latest offerings—comfortable, smooth, and feature-packed.

Amp up the pace a tick, and the AMG comes out, like a good dose of bitters waking up a fine cocktail. What was pleasant becomes potent; what was serene, electrifying. The spirit of the C63 S explored on the track is in evidence on the road.

You may have noticed that, to this point, most of the time has been spent on the C63 S. That’s because the C63 is just about the same—but less so, in nearly every way.

With the C450 AMG 4Matic sitting right below the C63 in power and performance (more to come on that this week), and the C63 S offering so much more, we’re not sure where this inverse Goldilocks (Skcolidlog?) is supposed to fit.

With only a 10-pack of laps on track and a scant handful of hours on the roads, my time with the Mercedes-AMG C63 and C63 S hasn’t yet been extensive enough for a more complete evaluation. On first impressions, however, the performance luxury sedan world is on notice—and newcomers like the Cadillac ATS-V will have a high bar to clear.