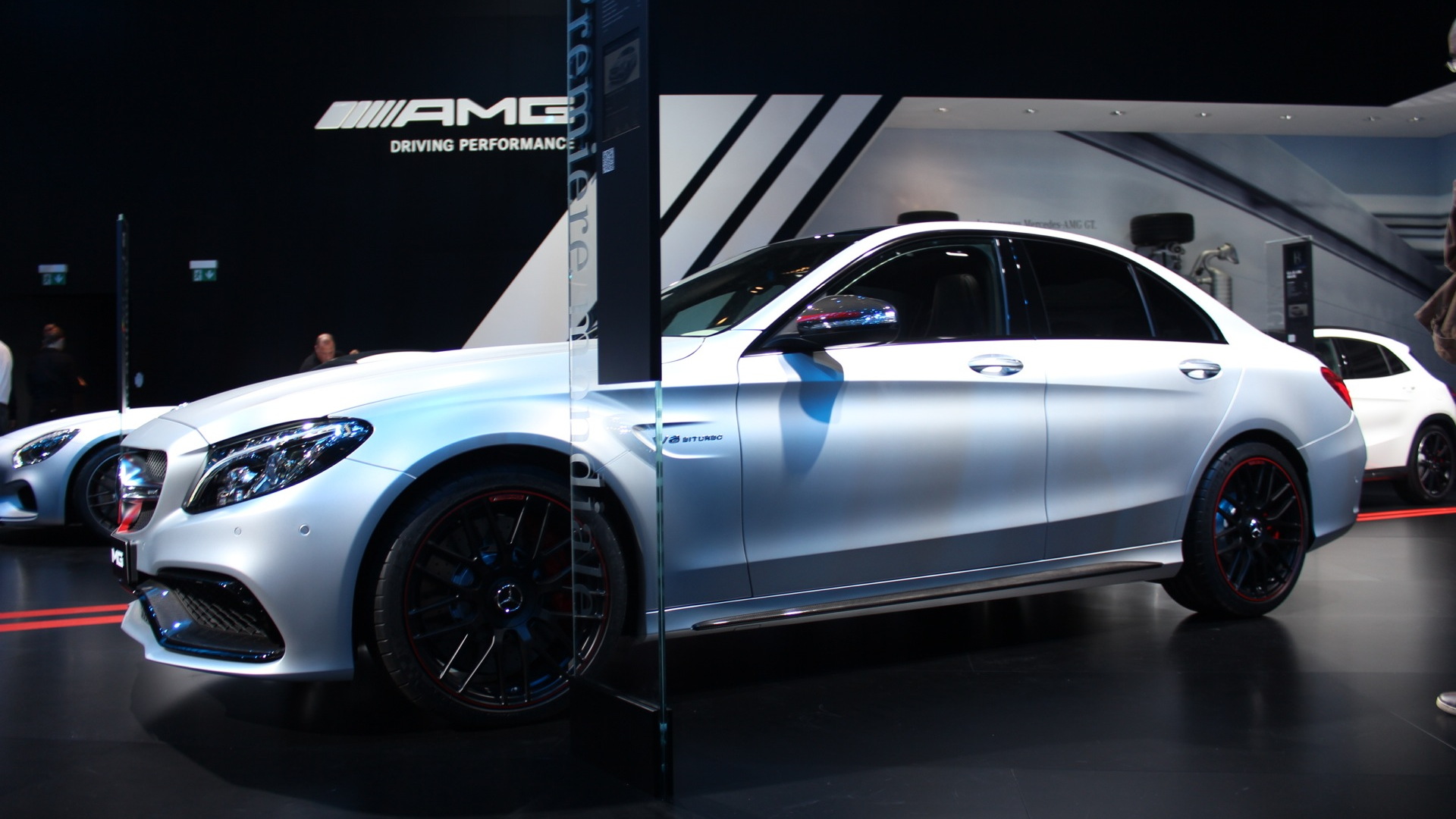 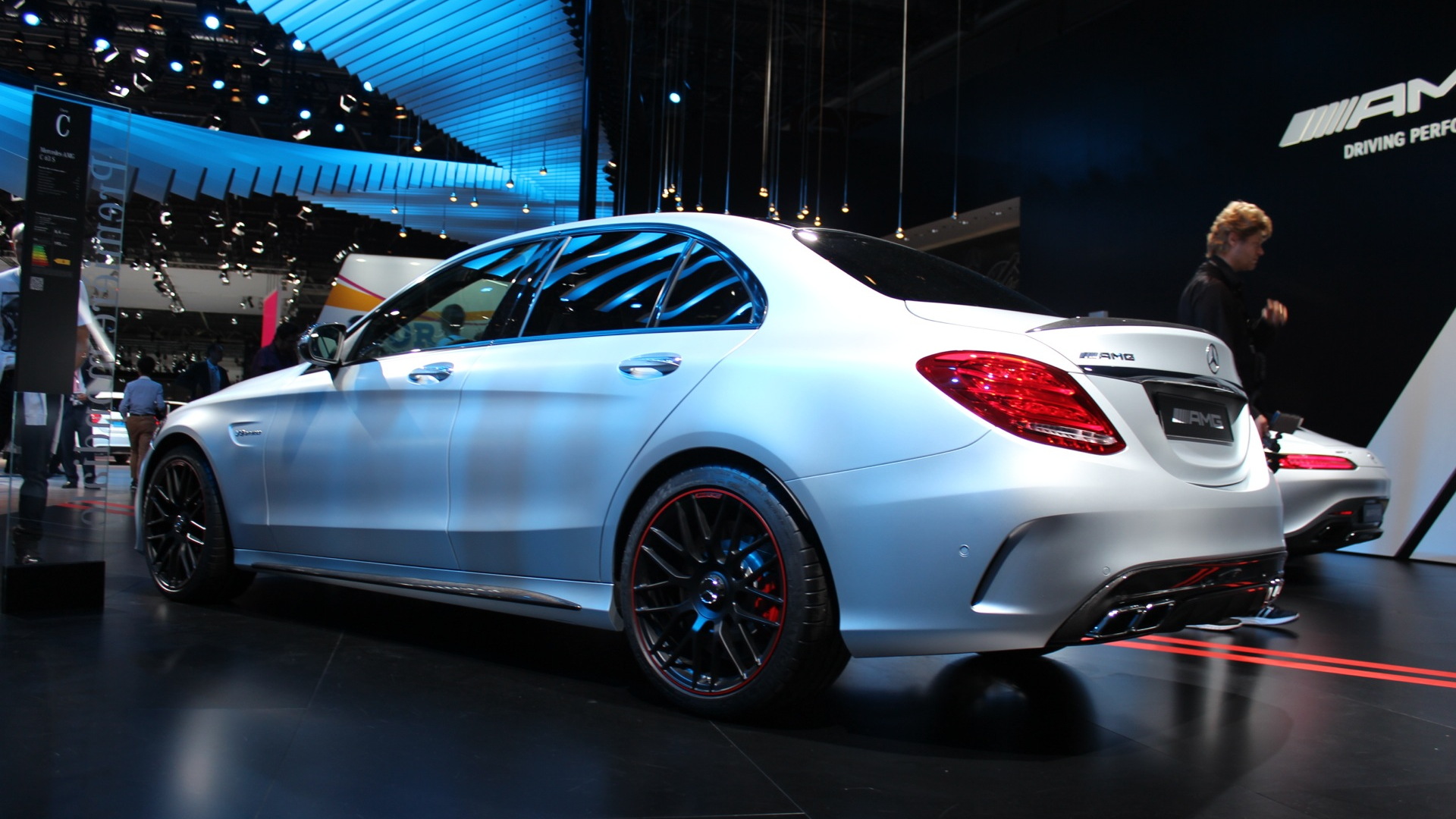 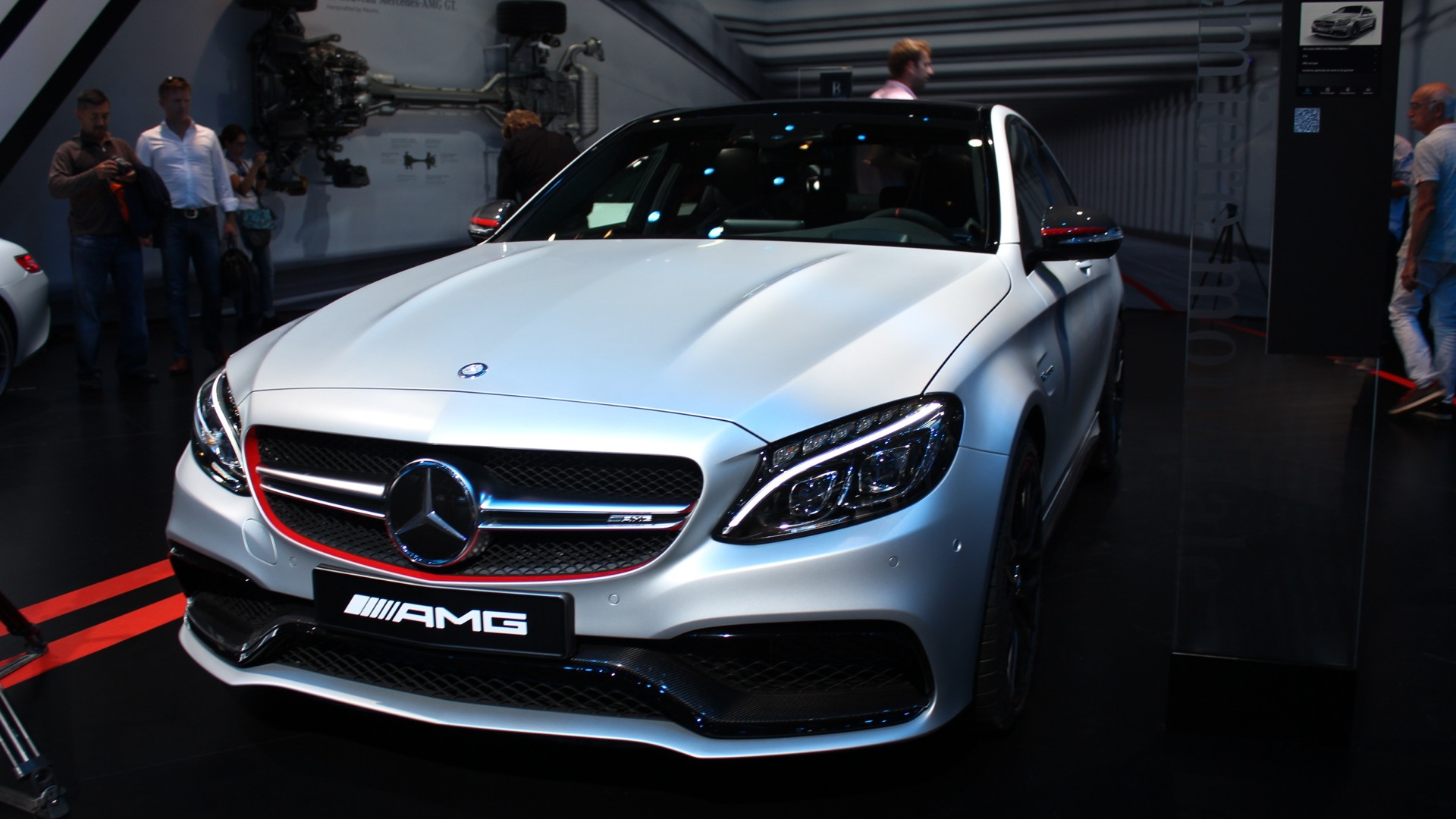 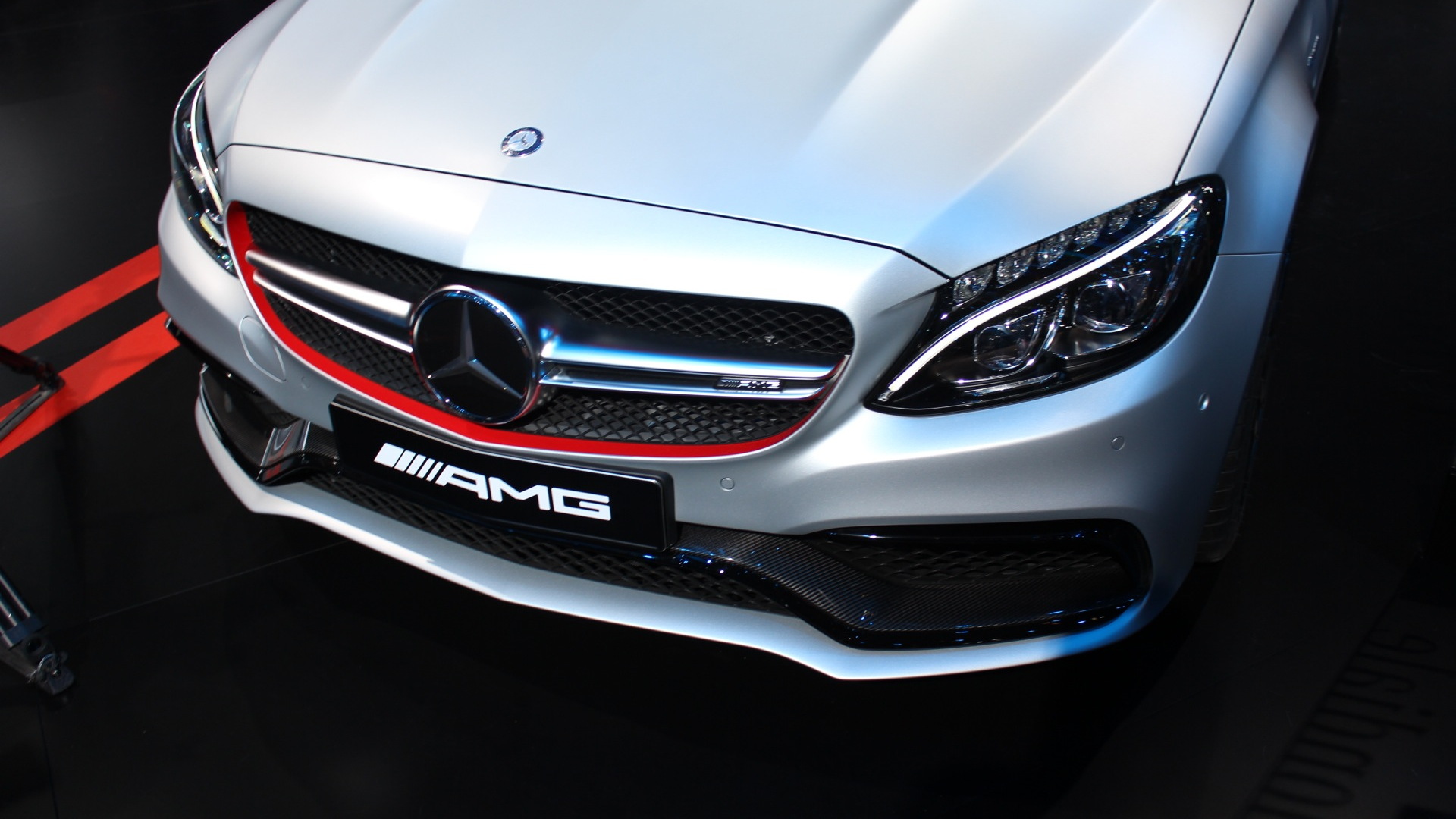 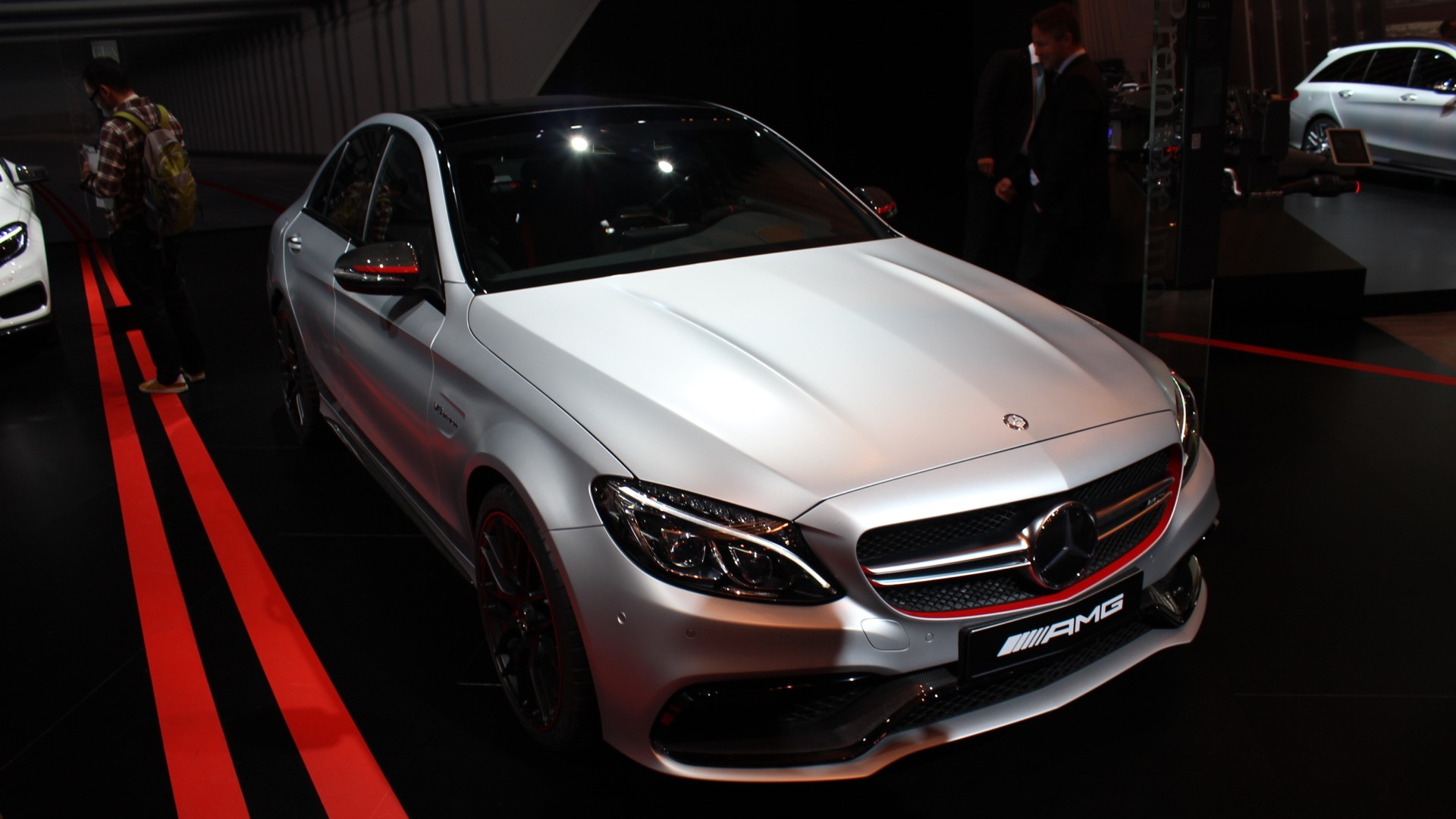 49
photos
Mercedes-Benz’s latest C63 AMG is finally here, and we have all the juicy details including news the car will come in two flavors for the first time: a standard model and a more potent S-badged version. We’ve also learned that the car’s official title has been changed to Mercedes-AMG C63 to better reflect the fact it’s a product of Mercedes-AMG based in Affalterbach rather than your run-of-the-mill Mercedes. The name change also reflects the link between the car and Mercedes-AMG’s other new baby, the GT sports car, with which it shares its engine.

The new C63 made its world debut this week at the 2014 Paris Auto Show in sedan and 'Estate' wagon bodystyles. As with the regular C-Class, we’ll only get the C63 sedan here in the U.S. It will arrive in showrooms next March as a 2015 model, in both C63 and C63 S flavors.

But the story doesn’t end there. In addition to class-leading output, the 2015 Mercedes-AMG C63 is also promised to have the best fuel economy for V-8 performance cars. AMG says the car is around 32 percent more efficient than the model it replaces and good for 28.6 mpg on the European combined cycle. It should be noted that EPA-rated fuel economy tends to be lower than the European figures.

Drive is sent to the rear wheels only—AMG is yet to mention if a 4MATIC all-wheel-drive version will be offered—via an AMG SPEEDSHIFT MCT seven-speed automatic with paddle shifters. The gearbox is carried over from the previous C63 but has been tuned for even faster shifts. It offers various modes including a Race mode exclusive to the C63 S.

With all functions set to their most optimal settings via the AMG DYNAMIC SELECT system, AMG estimates the new C63 will sprint to 62 mph from rest in just 4.0 seconds, while the C63 S will achieve the same feat in 3.9 seconds. Top speed for both is limited to 155 mph. The weight of the C63 is approximately 3,615 lbs, while the C63 S is slightly heavier at 3,648 lbs.

Other performance upgrades, either standard or available, include an adjustable exhaust system, dynamic engine mounts, adjustable dampers, a rear differential and speed-sensitive steering. Most of these features can be adjusted using the aforementioned AMG DYNAMIC SELECT system, which is controlled via a switch located next to the center console-mounted touchpad. Options the driver has includes Controlled Efficiency, Sport, Sport + and the C63 S-exclusive Race. The C63 gets 18-inch wheels as standard while the C63 S gets a 19-inch set. Steel brakes are standard on both but carbon ceramic brakes are available, a first for the model line.

Inside, the C63 builds on the stunning design of the standard C’s cabin by adopting a few special features such as the dash’s aluminum wing, an IWC-design clock, sports steering wheel and pedals, and bucket seats. There are also AMG logos located around the cabin and in the different menu systems of the digital interface.

As mentioned, sales of the 2015 Mercedes-AMG C63 and C63 S commence next March. While it’s sad that we miss out on the wagon, we can look forward to other C63 variants in the future such as a coupe and eventually a Black Series range-topper.