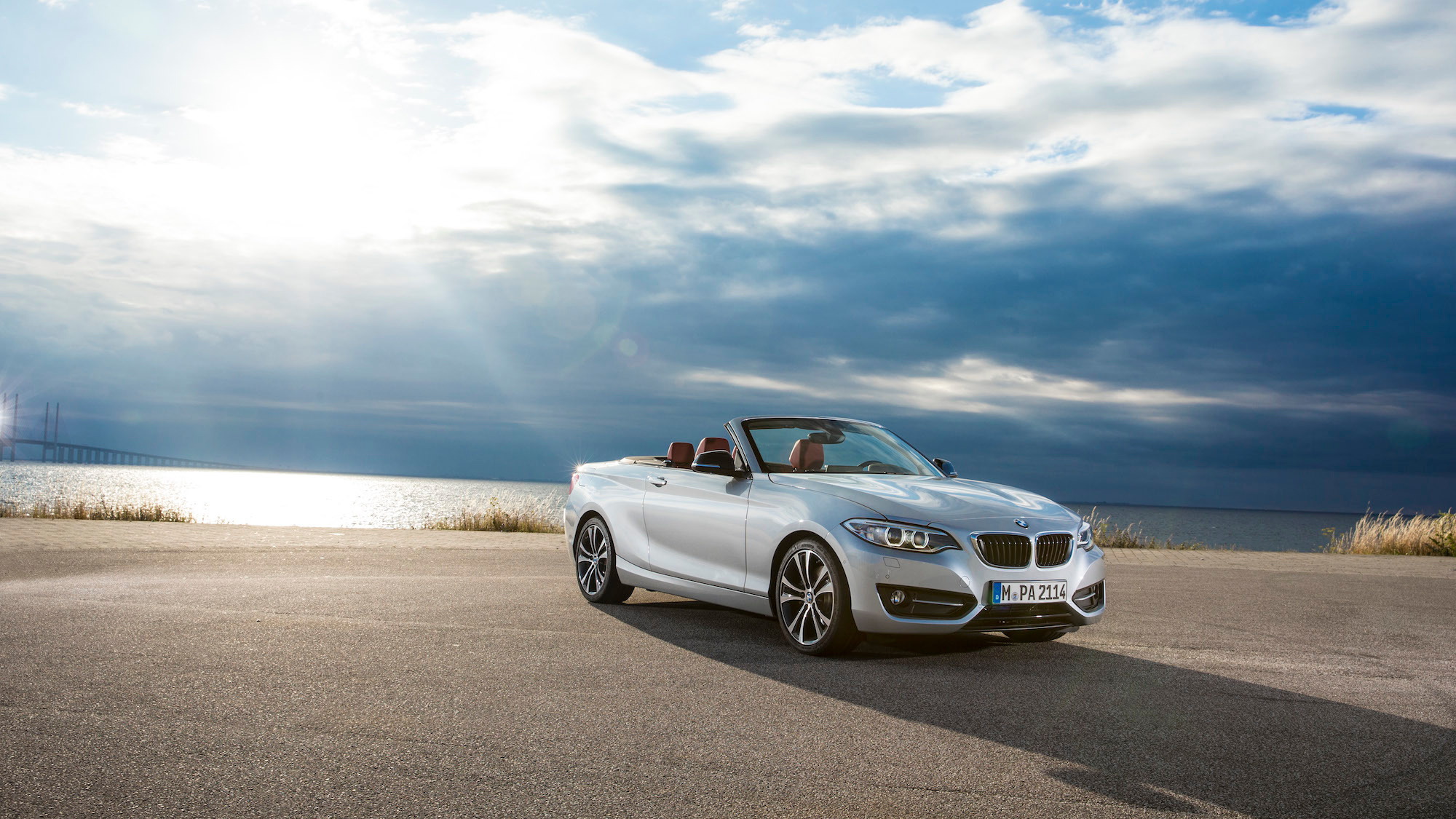 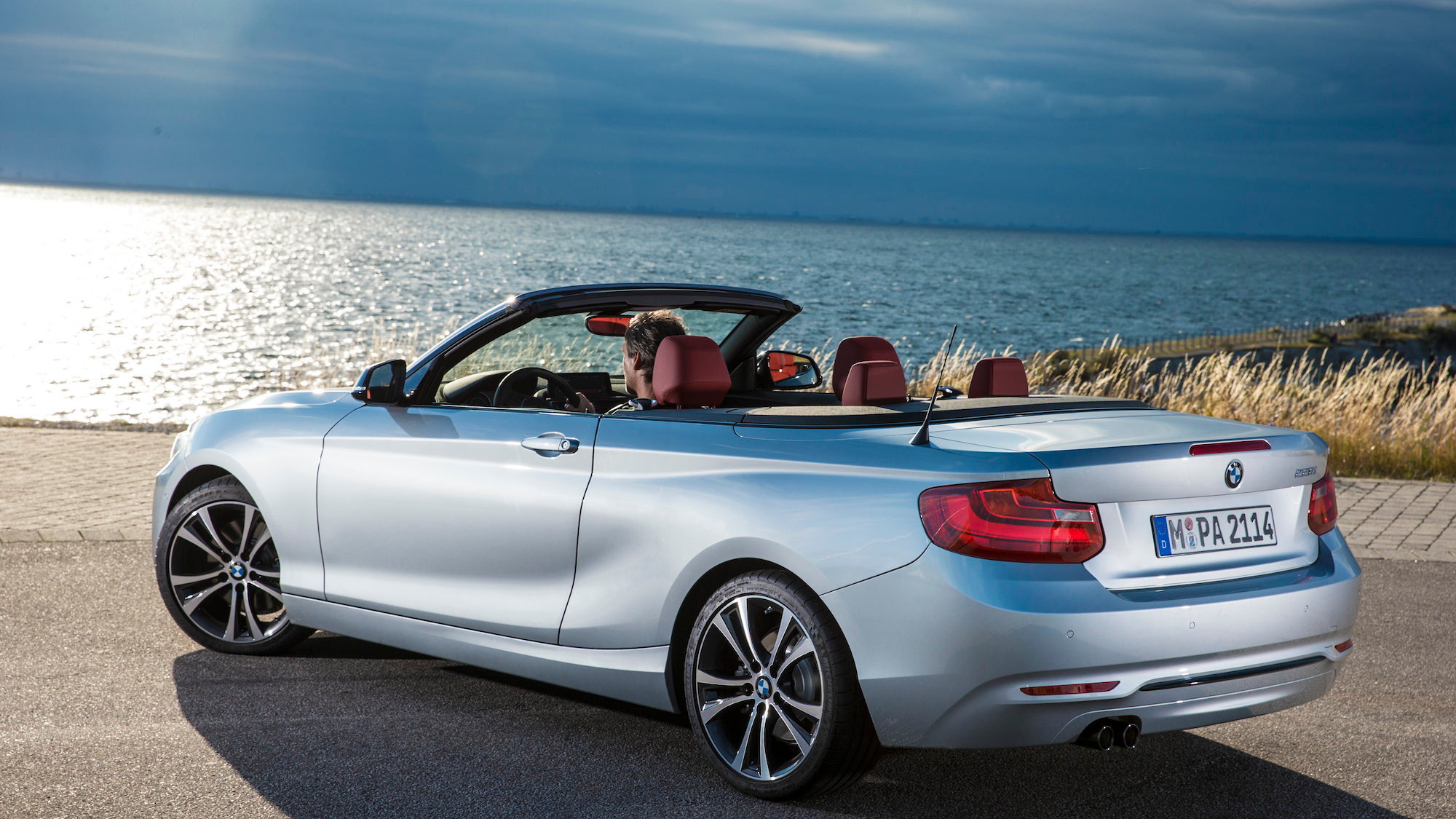 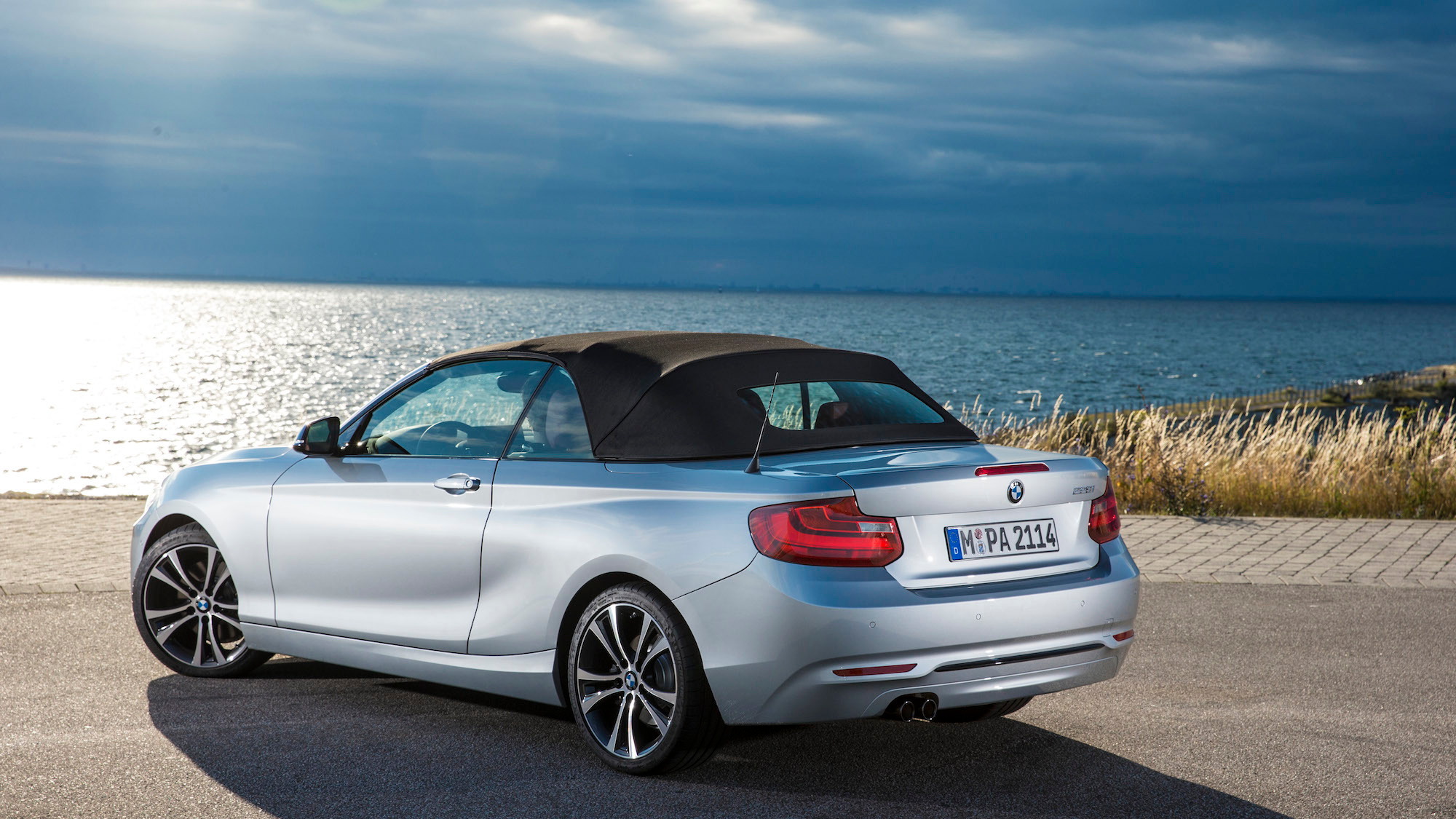 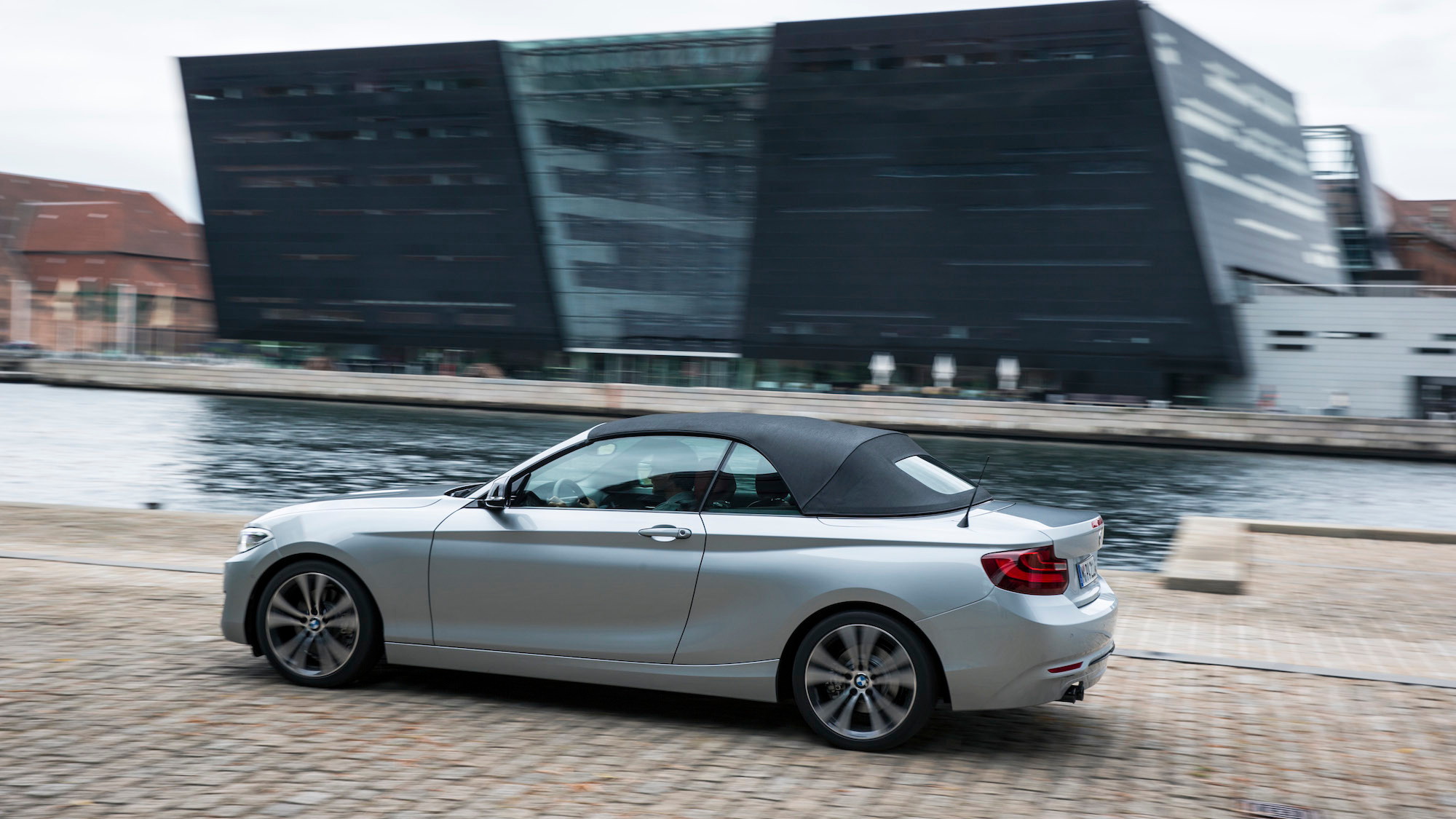 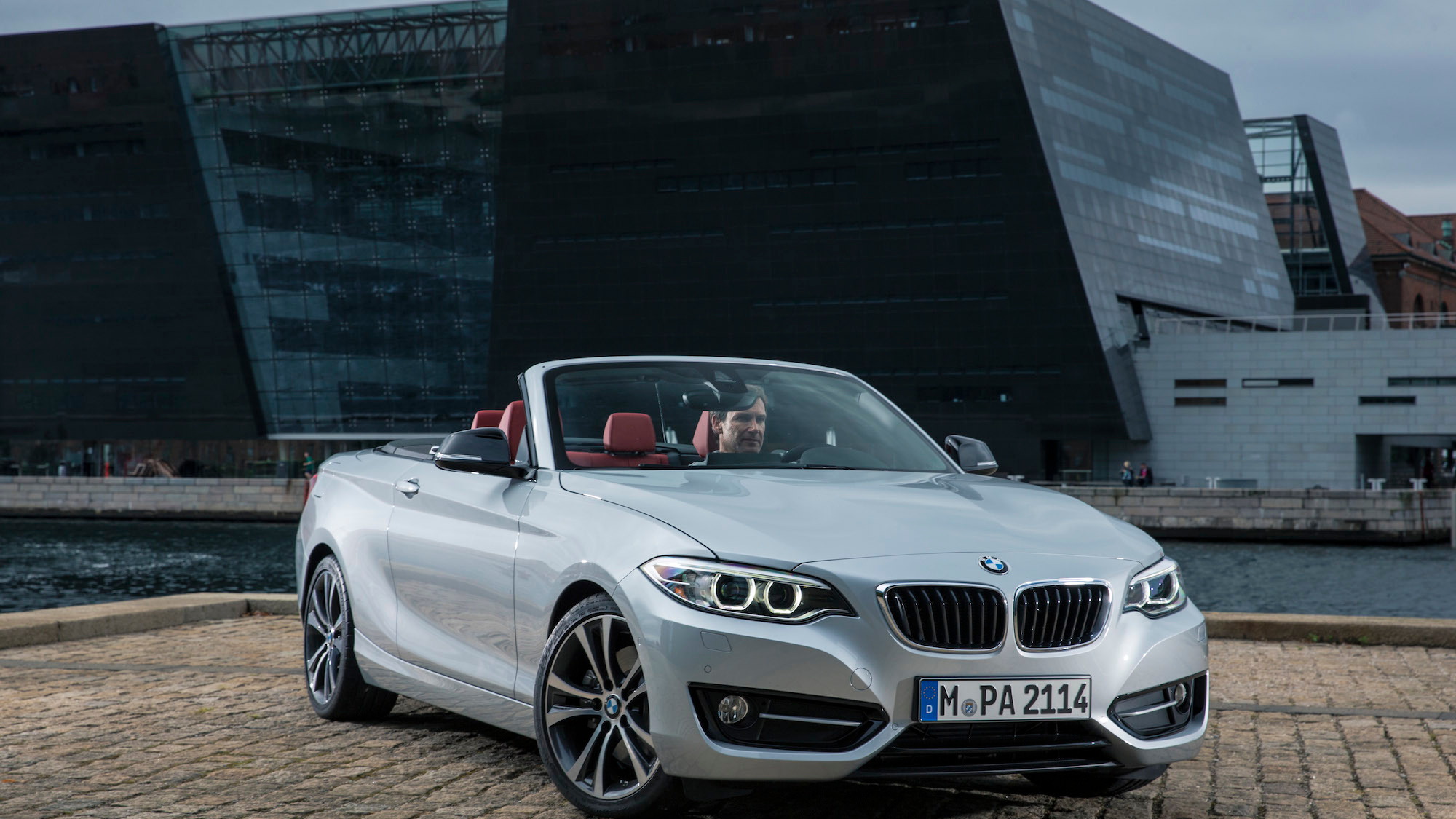 Fifty shades of grey may be a box-office phenomenon this weekend, but at BMW, it's business as usual. Ever see a Bavarian brochure without some halftone hue? Or five of them? If grey could be anthropomorphized, it'd be the brand mascot.

Somehow BMW manages to conjure grey outside of showrooms, too. Even in usually sunny Austin, they've brought with them a pallid sky as a backdrop for a fleet of silver-on-silver droptop 2-Series convertibles. There's a reason you don't see those photos here: it all blended together, and the cars vampired out on us. Sucks, we know.

We took it as a blessing and maybe a clever mind trick by BMW's event-planning Jedi. The anonymity gave us cover to scour Texas' flat planes outside the Circuit of the Americas F1 track in a fleet of 228i convertibles, up to triple-digit speeds, arousing the attention only of a longhorn staring down our leather seats with genealogical curiosity.

What we realized is no matter which BMW passenger car you're driving--even this one, which could be damned with faint praise as a German Sebring, as a Playskool-flavored My First BMW--there's still a warm mechanical vim, an engineering affluence, that transcends the rental fleet of four-seater convertibles.

Given our druthers--it's Texas, indulge us in some local color--we'd even swap a 3-Series for something as spiritually attuned to the road as the 2-Series. It's righteously sized, equipped with the road manners we used to crow about in the more legendary E30 3-Series, and as a convertible, it's a ruffle-free zone. It's also priced under $40,000 base, something exceedingly rare on anything else wearing this logo.

So, despite being told by our hosts, "Don't drive, as we say, with a knife in your mouth," we went on a quest for the far reach of the tach and speedo. (A knife? Hi, have you been to America? We're not even allowed to run with scissors.) And we attempted to answer some obvious softball questions: Is it as fun to flog as bigger BMWs? Or even a hardtop 2-Series?

Aside from the soft top, the 228i is essentially identical to its coupe cousin. It's a pretty car, with the stubby nub of the old 1-Series massaged out with a little extra length in the sideview. It's longer and wider, and that pays off with more interior space, but it's mostly at work giving the 1-Series a more lithe look. The hood lays out the case with classic long-nose, stubby-tail proportions. The convertible top latches into place with a keen slope. A deep stamp in the door panels directs the eye up and out toward the taillamps. The cues we'd leave off the 2-Series plate? The air intakes are big like the ones on the latest BMWs, and bigger as they are than the headlights, they compete for attention with the BMW grille. And no BMW owner wants you to see anything but those twin kidneys when you check your six.

Sport Line cars like ours have their own 18-inch wheel designs, snappier than the base wheels, along with other interior trim a cut above base. On uprated M235i convertibles (not at our drive), there's an aero body kit affixed to the ends and sills.

Absent as well here are any all-wheel-drive cars, though it's an option across the 2-Series lineup, and no manual transmissions either--the six-speed is limited to the 320-hp M235i.

Those M235i convertibles were missed, but the 2-Series Convertible isn't dishwater when it's saddled up with the base turbo four. The 228i rates 240 hp and 255 lb-ft of torque from its 2.0-liter turbocharged four-cylinder. Zero to 60 mph acceleration occurs in just 5.7 seconds. It's the best fit for this engine across all of BMW's lineup, in power to weight terms, and in the open-air appreciation for its mechanical noises. The Muzak BMW pipes into bigger hardtops isn't here, and there's a pleasant throwback quality to the E30 when this four-cylinder winds toward redline.

An eight-speed automatic transmission is standard equipment, and it's intertwined with Driving Dynamics Control, with its four driving modes. We dial past Eco Pro, Comfort, and stop at Sport, with Sport+ still left in the bank in case we find a road with more than a few degrees of directional or camber change.

BMW brought a fleet of 228i Convertibles--in grey--and in a configuration that might seem odd, if you fail to read past "base powertrain." The identically equipped cars came with Sport Line trim and the Track Handling Package ($1,600 with the Sport Line kit, $2,200 without it).

The track package adds 19-inch Michelin Pilot Super Sport non-runflat tires (standard are 17-inchers, and 18s are available), ride height lowered by 10 mm, BMW's Adaptive M Suspension, Sport Steering Rack, and M Sport Brakes. If you assume most of the four-cylinder convertibles BMW sells or leases will go out closer to base form, and the sport add-ons will most likely grok with the six-cylinders, it's a lot of extra cost and content going into the slowest 2-Series possible.

MUST SEE: The Bugatti Veyron Finally Sounds Like Your Brain Thinks A Quad-Turbo W-16 Should: Video

Then you drive it and realize even the lower-rung 2ers are capable of some sizzle. Even this "base powertrain" convertible leaps to 60 mph in 5.4 seconds; it compares well to the M235i's quoted 4.8 seconds.

It compares well to BMW's past, too. The 228i's steering winds in and out with familiarity, and without any digital hitches. The paddle shift controls keep the turbo four in delicious sync. The mechanical harmony seeps down through the five-link rear suspension and front struts--and in this case, the adaptive dampers. It's all in concert, with near-perfect damping, admittedly on near-perfect roads. We still need to catch the 228i on rougher roads without the adaptive dampers, in something closer to absolute base form, to give a total verdict on how the more commonly found cars are going to behave.

BMW says the 2er convertible is a stronger, swifter successor to the 1-Series, and we'd agree. It's no performance sleeper, but the tuning inspired us to wring out the four-cylinder for long uphill passes and the few switchbacks we could find. It feels true to the best BMW era, and that's no small feat in the age of electronic everything.

We spent most of the cloudy morning on our way to bigger and faster things at COTA, with the top down and the wind blocker up. After you flip the lid and flip up the blocker, there's an absence of wind in the cockpit that's perfect for anyone who still has hair or functioning eardrums. If you don't want it, for whatever sadomasochistic reason, the blocker pulls out of place and folds in half, so it can be stored in the trunk along with the top.

That top, by the way, is made of fabric, and can open or close in 20 seconds, at speeds up to 30 mph. It can be opened or closed by remote. And there's a color option in grey (of course) or brown that weaves in metallic fibers, giving the roof a little shimmer of its own.

We remain pleased by the 2-Series' useful size gains over the 1-Series. It's much more spacious in the rear seat, and even if our knees and shoulders touch the other passenger stuffed in the back seat, at least we no longer feel a blindfold and cigarette are appropriate accessories.

It's not just our imagination. Compared to the former car, the new 2-Series has 0.4 inches more access room to the back seat, and 1.4 inches more in loading width into the trunk. The passthrough from the trunk to the rear passenger area (accessible with the seats folded down) is now 5.9 inches wider and 1.1 inches taller. The result? Room for two 46-inch golf bags, or, “a pair of snowboards,” says BMW.

The 2er also has more tech and safety gear, including over-the-air updates to its navigation data as part of the BMW ConnectedDrive system and advanced safety features including lane-departure and forward-collision warnings, speed-limit alerts, and a central display up to 8.8 inches wide. On the entertainment front, a Harmon Kardon HiFi audio system is available, as is Bluetooth audio streaming, app compatibility, and more.