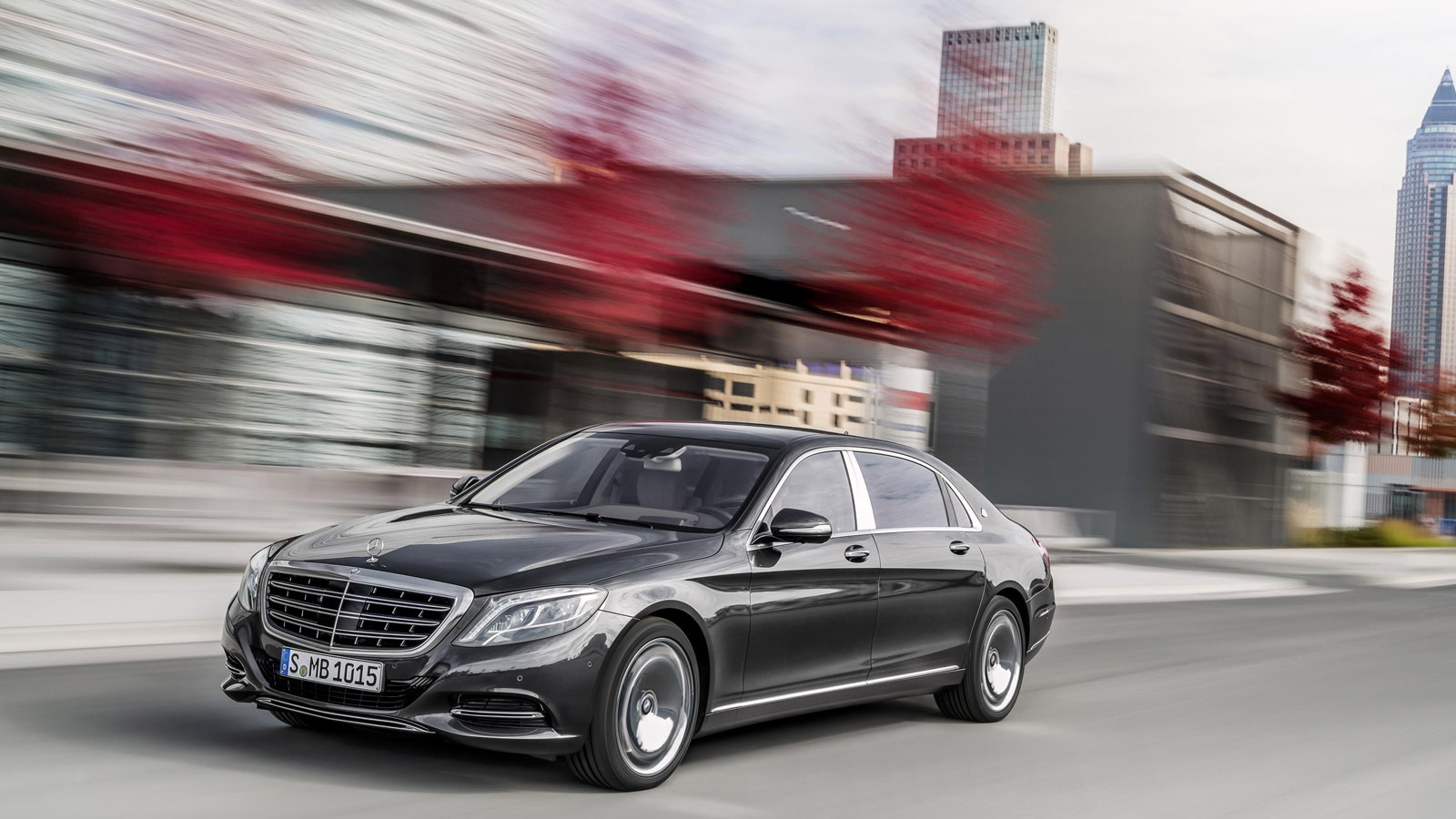 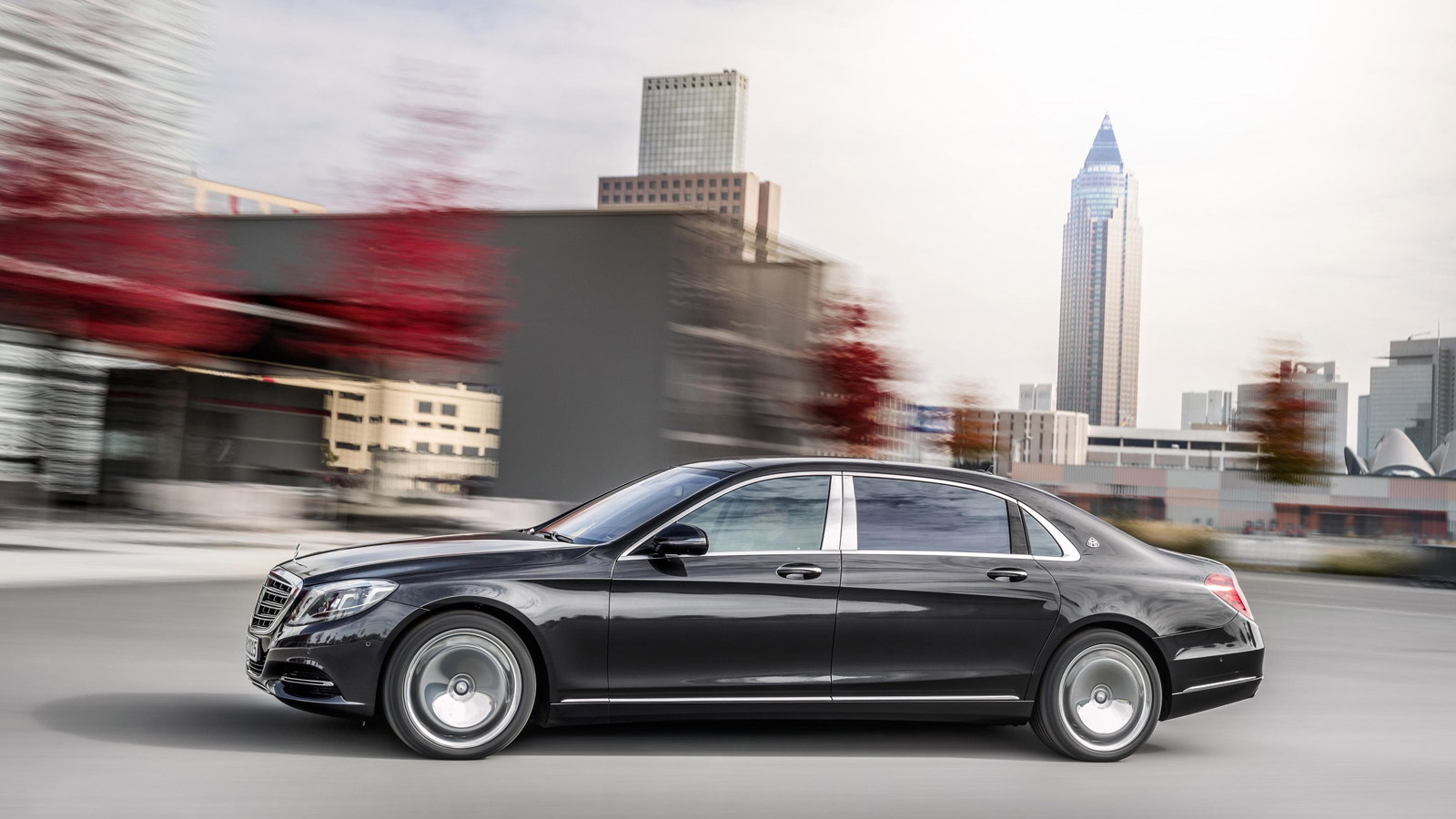 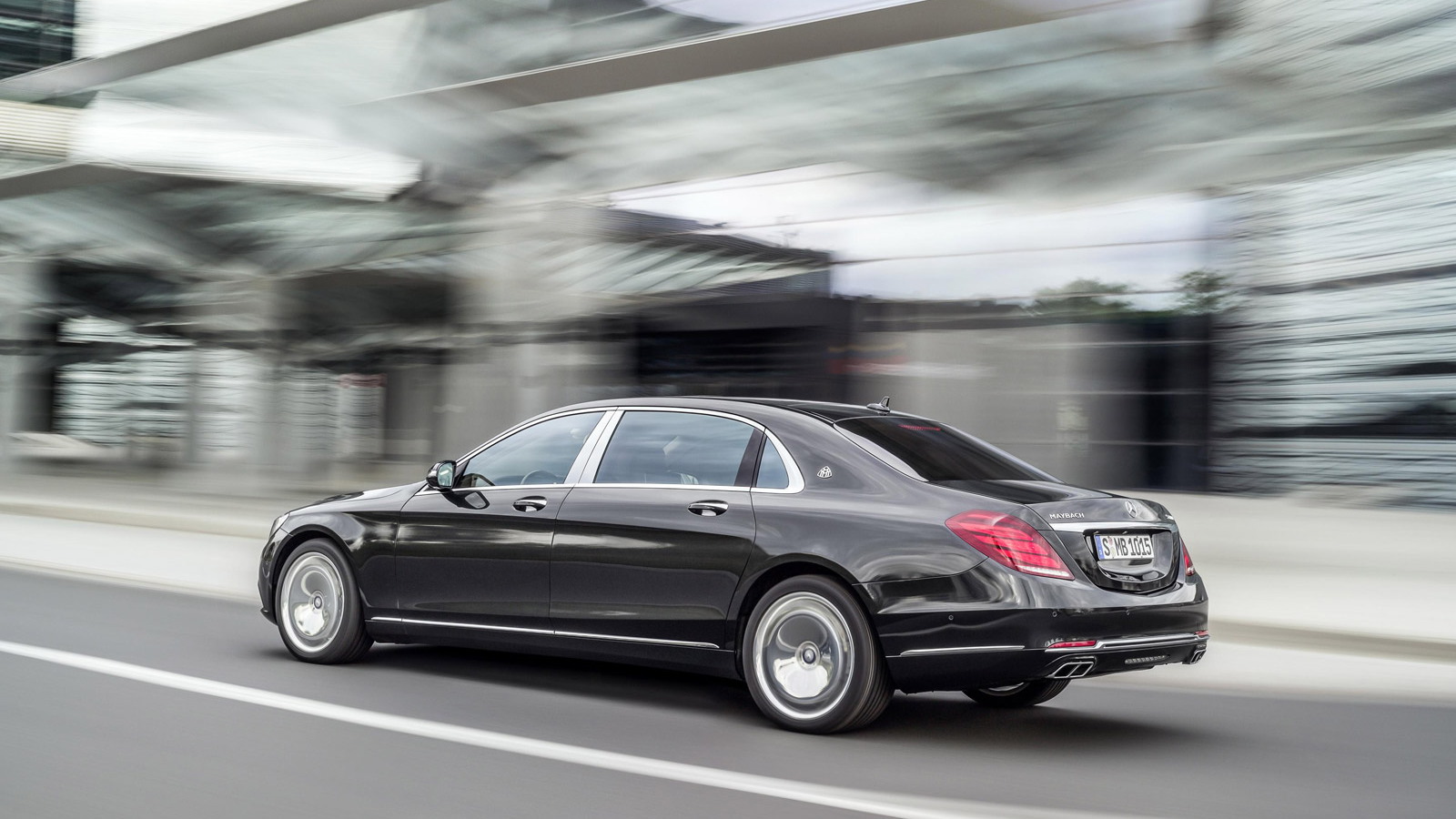 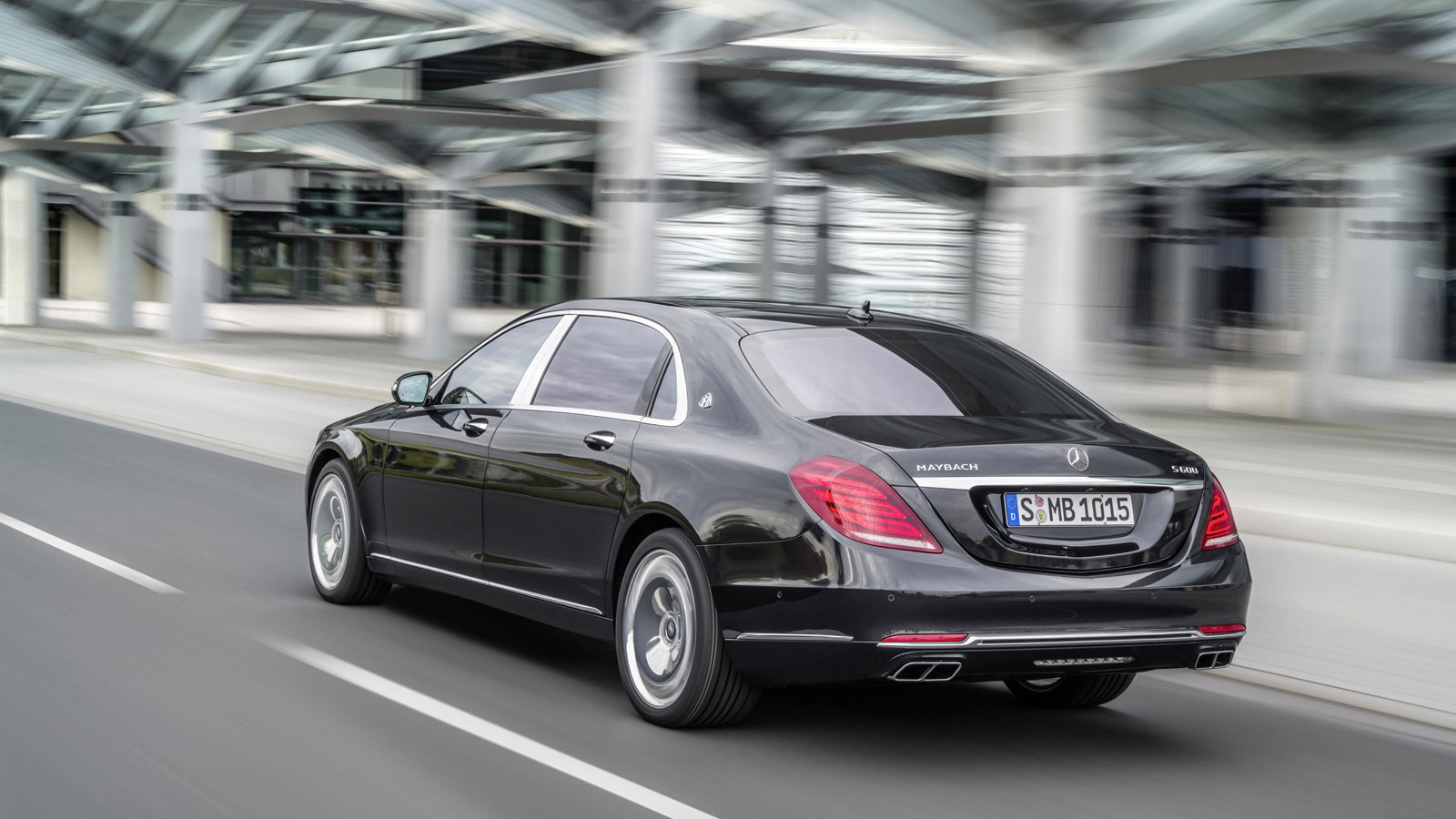 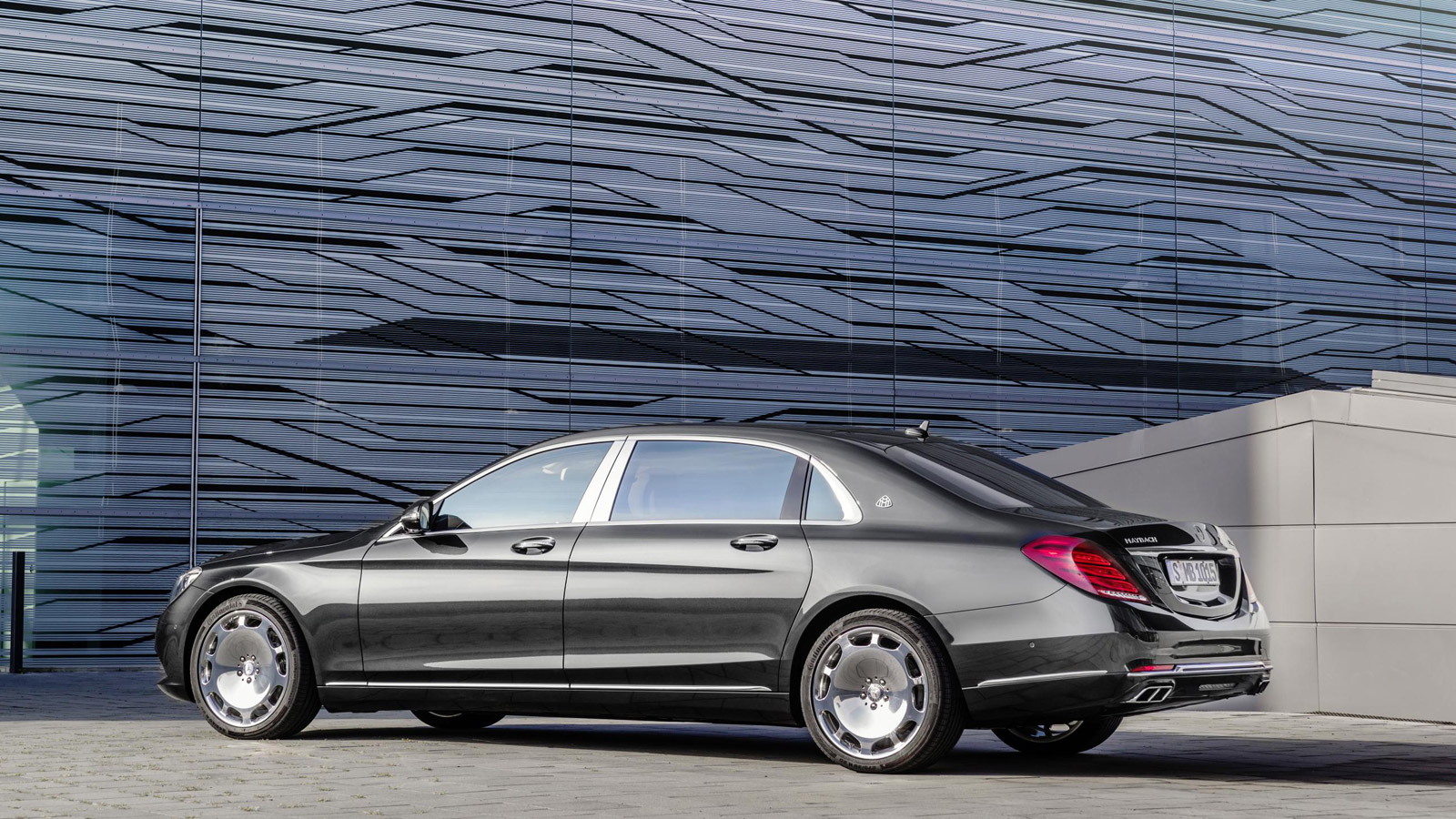 DATELINE--Santa Barbara. I may be drifting off to sleep on a sueded pillow of dreams, but it doesn't stop me from thinking of all the vehicles I've been driven in. It's mostly not illustrious. Prom limos. Airport shuttles. White Ford Crown Victorias with pretty red and blue lights.

ALSO SEE: Mercedes-Benz May Have The Best Ad Of Super Bowl XLIX: Video

A few miles down the road past Neverland Ranch is all it takes to realize that, for a very thin slice of society, the list gets much, so much better: Bentleys, Rolls-Royces, custom watercraft, sedan chairs. Somewhere in that heady mix, no doubt, will be the new Mercedes-Maybach S600 S-Class, a car so good, apparently, it has the power to evict "Benz" from the automaker's badging.

Maybach was most recently a stand-alone model, back in the early 2000s, when it was priced closer to $400,000. When I spent most of a day in one being driven across Switzerland, lulled to sleep with Diana Krall on endless DVD repeat. It's now a sub-brand of Mercedes-Benz in the same way Mercedes-AMG has been upgraded in status. The most noticeable difference: the perfect jazz notes of Mrs. Costello have been replaced by a colleague explaining, basically, how Santa Barbara is an oasis in the failed state of California.

Back on topic, Maybach has a new mission, to specialize in ultra-luxury upfitting across more than just one model line. The goal of the Mercedes-Maybach S600 left unsaid, is to make the standard S-Class seem a shame, really. Like, if you bought it, you'd be in the same agony if you were a learning patient for the League of Aggressive Dental Hygienists. (We know that's not true.)

There's just one way to approach a test drive like this one, and that's why I commanded our chauffeur for the day to "Drive it like we're under mortar attack." It's the only real test of a $200,000 sedan that's aimed mostly at folks with big collections of things--cars, militias, economies.

What makes it a Maybach?

The Mercedes-Maybach is derived from the new S-Class, a car so good it's already flatlined the current German competition. A car so nifty it has its own fragrance, just like Jennifer Lopez and that miracle of zombie licensing, HUMMER.

Understated and handsome, the quite clearly stretched Maybach has a lovely stance. It's not effusively wrong like its two-toned predecessor, the Maybach 57/62, a testament to ungainly badge engineering if ever there was one (two if you count the Fox-body Mercury Capri).

The grille and air intakes on the front are slightly different, but all the big changes come in the Maybach's profile behind the front doors. The rear door is shorter (by 2.6 inches) and the little triangle of a window has moved to the car's body, all better to disguise the roughly eight inches in length that have been implanted between its wheels.

It achieves the gravitas of a Bentley, and there's a real distinction between the S-Class' lithe look and the formal take of the Maybach--like adding a vest and lapel flower to a suit. The pillars wear double-M logos and the rear end wears Maybach badging, just in case you hadn't noticed the screened-off, blacked-out windows of the person being driven in the rear seat.

The pulled and pleated S-Class goes from Platinum to Diamond Medallion status through good old-fashioned upholstery. In all, 8.1 inches longer, the wheelbase of the Maybach is 7.9 inches longer than the long-wheelbase S-Class that's been the only S-Class we get in the U.S. (There's a short-wheelbase version rolling around in relatively impoverished countries like France.)

The extra room nets an additional 6.3 inches of leg room for the rear seat, and the Maybach makes the most of it by fitting an executive interior worthy of long road trips. It becomes a suitable alternative to a private jet, when distances are shorter. Or, for some, it's the car you ship to the next global destination, and use between Gulfstream segments.

Like the S-Class itself, the Maybach cabin is a considerate place, a more emotionally connected experience than any Mercedes of recent vintage, save maybe the SLS AMG GT. The driver doesn't get left out of the process. There's an HD audio speaker system that keeps the driver and passenger at inside voice levels, and even improves the quality of calls taken from the back seat.

But it's really the province of the rear seat where the Maybach makes its place. Mercedes claims it's the world's quietest sedan, and true to form, when you pull the doors near closed, the Maybach clutches them closely, sealing out the filthy, noisy, proletarian world of Santa Barbara outside.

Executive rear seats on both sides in the Maybach have the lay-out space of a first-class seat on a well-regarded airline, with a little less room on the left, behind the driver. In the right-side rear seat, the passenger can move the front seat forward for even more lounging space. Both rear seats swing between 19 and 43.5 degrees of incline, have a power-rising calf support, multi-adjustable bolsters and a massaging function with heating and ventilation--even a sueded pillow for extra absorbency in accidents that are otherwise usually quite uncomfortable.

It's the kind of sociological bubble that would fit right in on an Emirates plane or a custom-fitted big boat. Big cupholders split the rear seats and can cool or heat beverages, but you won't want to do that to the bubbly in the Maybach's two custom-made, silver-plated drinking flutes. Airline-style work tables with leather inserts tuck into the same console with the discretion of a multi-million-dollar harassment lawsuit.

Even if you're not easily swayed (suede?) by the Maybach's luscious leathers and wonderful woods, you'll be charmed by some of the exquisite details, like the nut brown quilted hides that rise almost to the top of the door panels. Fiber-optic cables provide color-changing glow to the entire cabin at night, even emanating from behind the twin 12.3-inch screens that keep tabs on speed and navigation. The available Burmester 3D sound system is a sensation all its own--but its chrome speaker grilles that spiral into action when the system comes on are a tour de force detail that shows Mercedes knows how to appeal to all the senses.

The Maybach even gets its own shpritz of cologne like other S-Class sedans--but it's a unique "agarwood" scent all its own, played through the cabin like the world's most expensive Air Wick.

Seriously, is it that much better than an S-Class?

It is, if you're regularly trying to save time, not money. It's a companion piece to the upfitted Sprinters that are a quiet rage in the celebrity world: step in back, flip out the airline-style snack trays, tap into the on-board wireless Internet, and you're negotiating your next three-picture deal with the Pacific off in the distance, traffic effectively neutralized.

Or maybe you're stuck in one of those epic Beijing traffiic jams, and have a couple of hours to go the next kilometer. Actually, that's a much more likely scenario, since Mercedes thinks about 60 percent of Maybach sales will go to China, where Bentley's been having a field day in the uber-luxury niche, mostly to itself.

It's simple enough to be driven in a Maybach and appreciate all those comforts. We took an hour to drive one, too--because frankly, the auto-journalist's station in life is more donning the white gloves. The same twin-turbocharged 6.0-liter V-12 as in the S600 is here, also rated at 523 horsepower and 612 pound-feet of torque, coupled to a seven-speed adaptive automatic transmission. It's not neutered in any way--the deeply satisfying drivetrain's noises waft into the cabin, competing with the agarwood game.

Owners can expect 0-60 mph times of just 5 seconds, and a top speed of 155 mph, untestable amid a bumper crop of CHPs. In the future, V-6 and V-8 options will become available. It's astonishing how quickly and smartly the Maybach lays down a hustle, leans precisely into corners, shrieks from its tires with the precise tone you want to hear when evading a rebel insurrection. All the while, it maintains a gloriously even keel from its Magic Body Control suspension and cameras that predict the road surface ahead, and prepare the suspension for the worst.

Like the S-Class, the Maybach bundles some of the most sophisticated safety hardware available. The Maybach can sense upcoming obstacles, including pedestrians, and come to a stop or slow dramatically to cut down the risk of passenger injury. Adaptive cruise control with lane-keeping assist is a clear first step on the path to autonomous-driving modes. The rear-seat airbags include pockets at the seat cushion bottom and sides, to keep reclining passengers in place.

More likely to win over steely corporate-raider hearts are the standard panoramic roof (with optional photochromic control); Nappa leather; a refrigerated rear console box; active parking assist; the ambient lighting that makes you feel like you're ascending to meet St. Peter; our favorite mocha-black paint and nut-brown leather that should have been called Valrhona; and gorgeous dished and chromed 20-inch wheels, a Maybach exclusive.

The Mercedes-Maybach might slightly offend historians as a more obvious S-Class spin-off, but that would only make sense if the current S-Class was a plebe machine. Priced from $190,275, including a $925 destination charge and a gas-guzzler tax yet to be determined (despite stop/start being standard), it undercuts the $200k starting price of Bentley’s Flying Spur and it’s considerably less than the $260k you’ll need to step into a Rolls-Royce Ghost. It's actually not even the most expensive S-Class you can buy--for now, that's the extraordinary AMG edition.

There will be more Maybachs that leverage other Mercedes vehicles. For the ultimate in S-Class accoutrements, there's the even bigger Pullman, with more wheelbase, more visual armor, more price tag. It's set to try to dethrone the long-wheelbase Rolls Phantom this year, aimed as it is "at government and very pinnacle of society."  A Maybach version of the updated GLS-Class SUV is being hinted at strongly, and an E-Class Maybach aimed specifically at China is a strong candidate.

It's not coachbuilt, but still, this new Maybach is a cut above those Bavarian competitors, and is probably an unwelcome harbinger for Bentley and Rolls-Royce. It's a well-priced, well-placed bargain compared to those British pinnacles of taste.