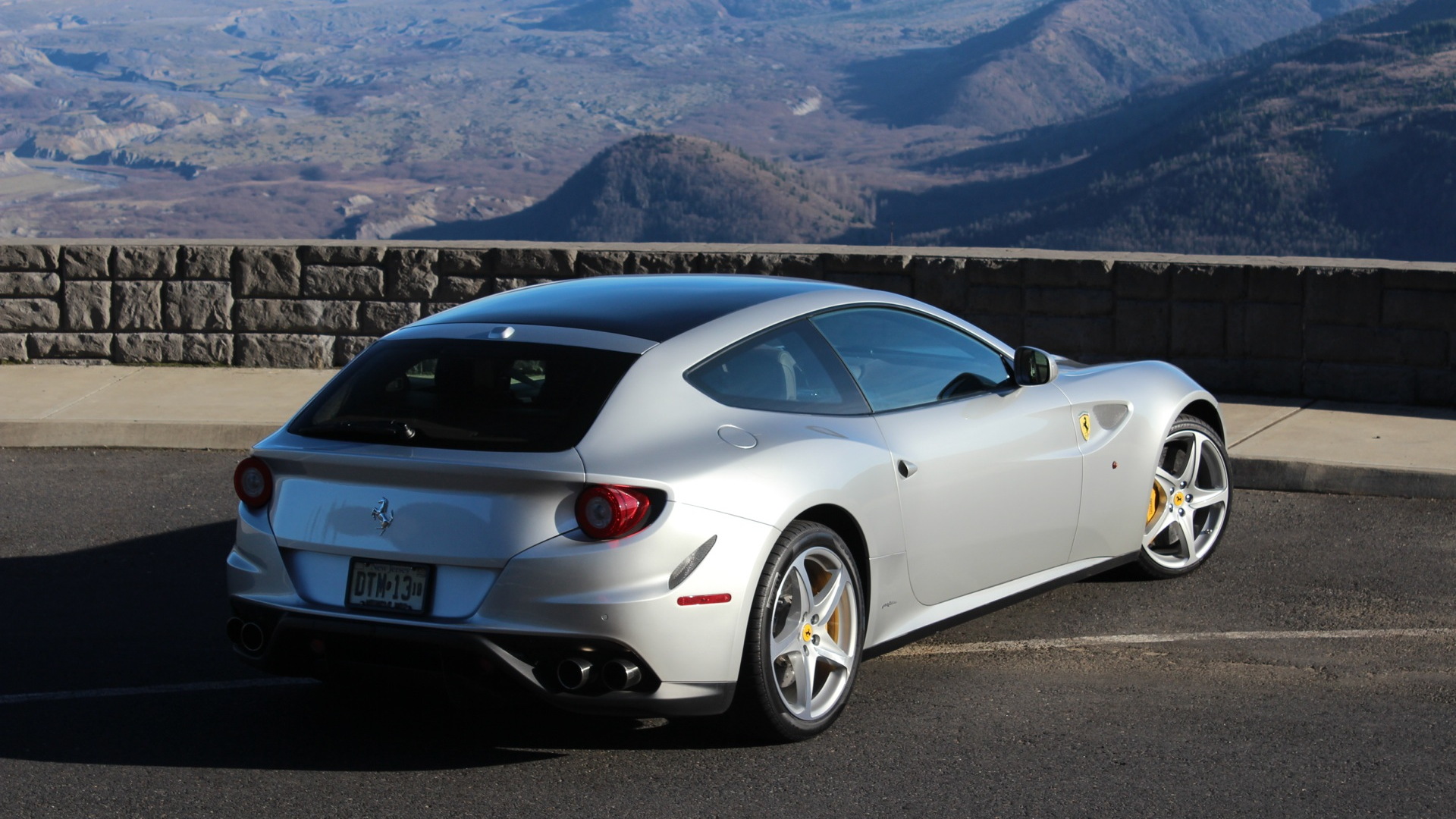 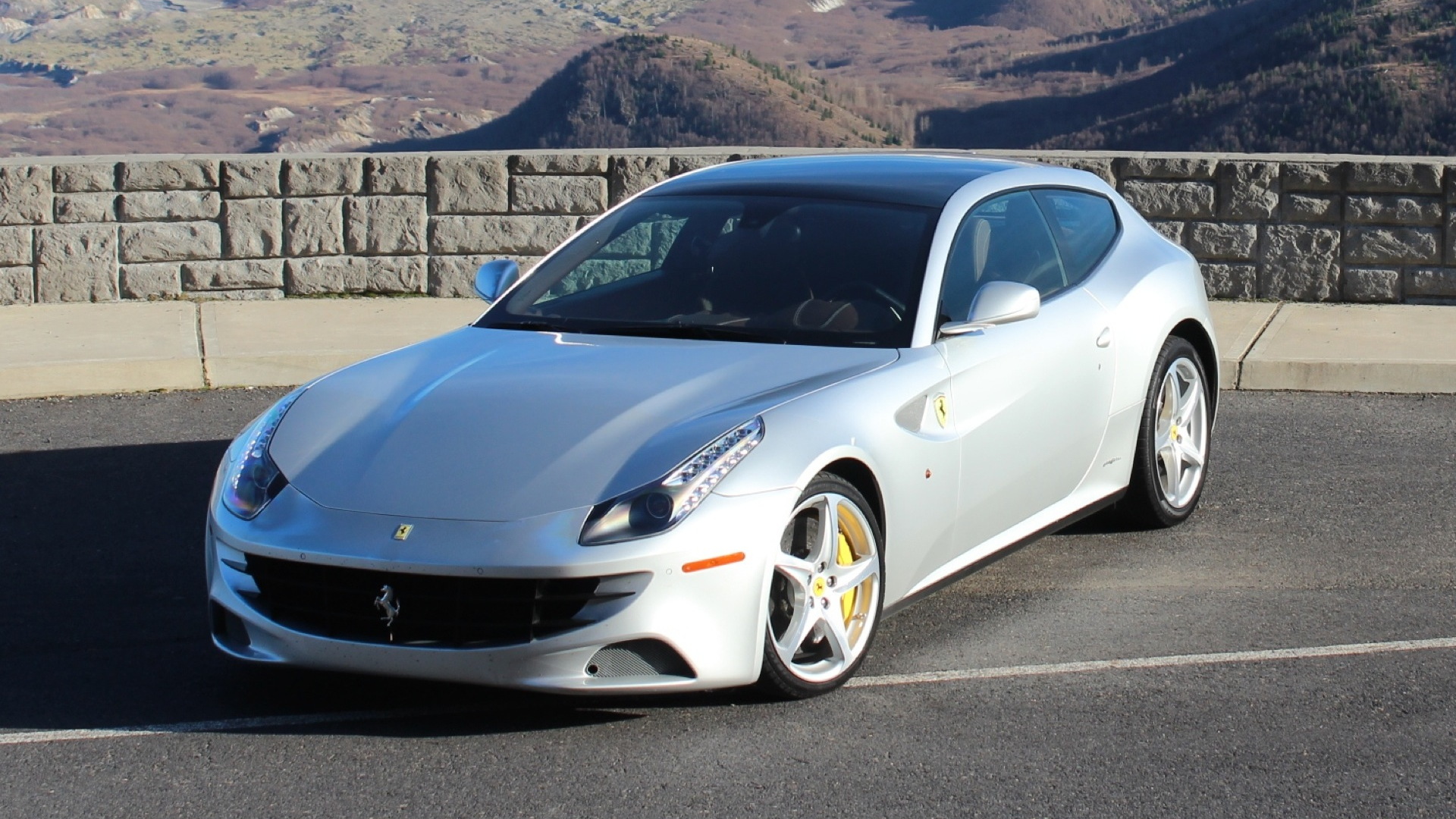 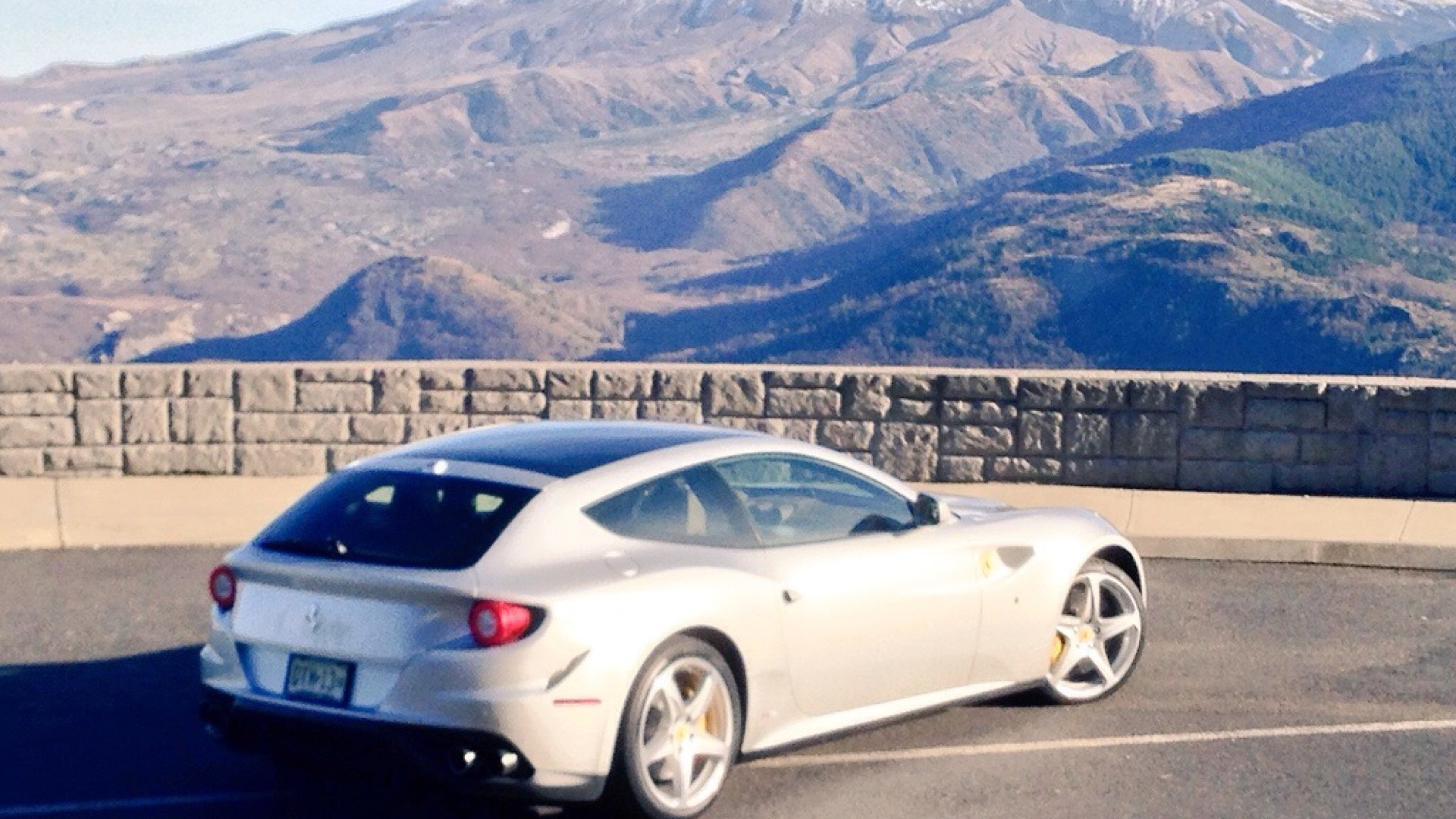 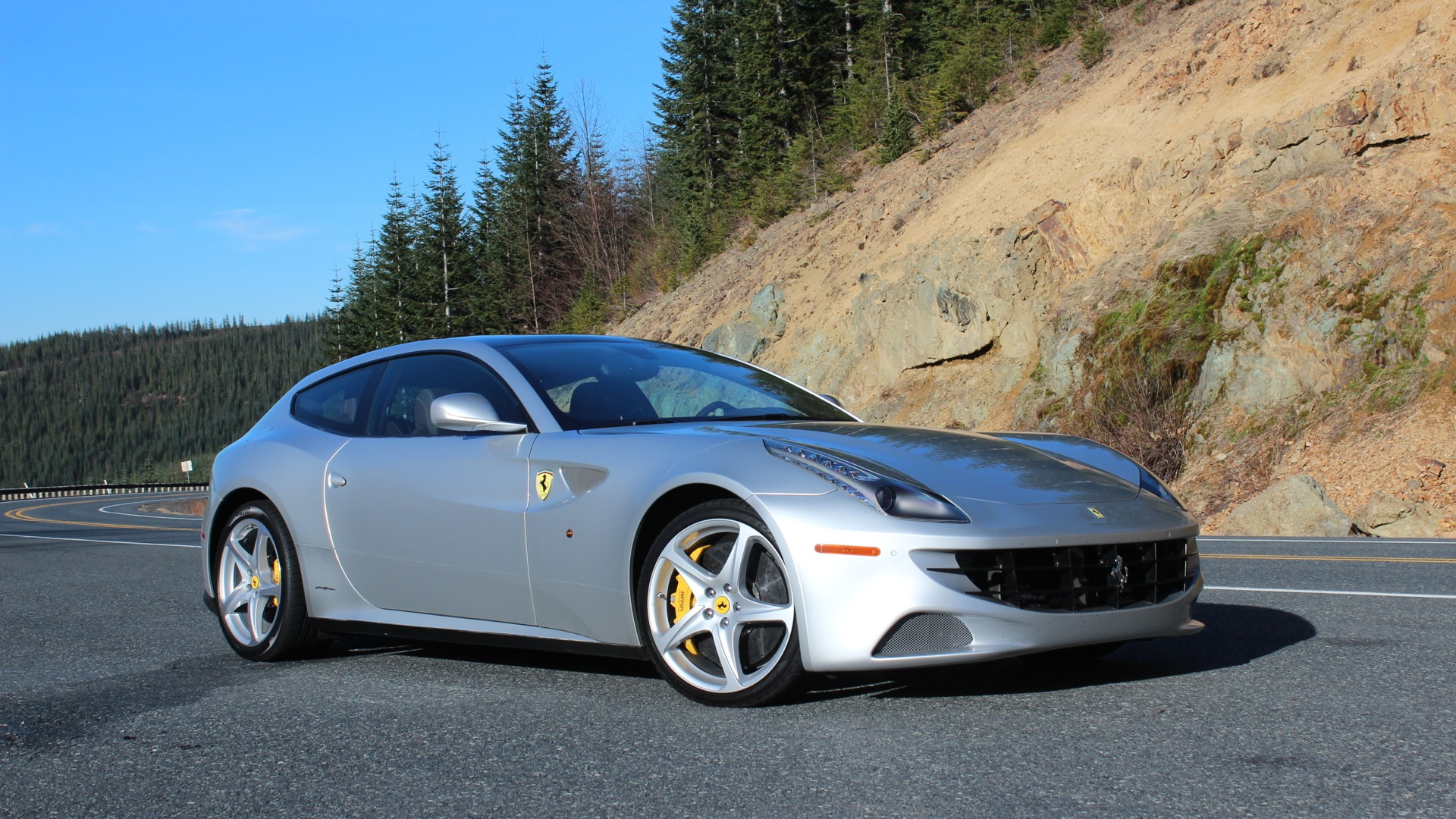 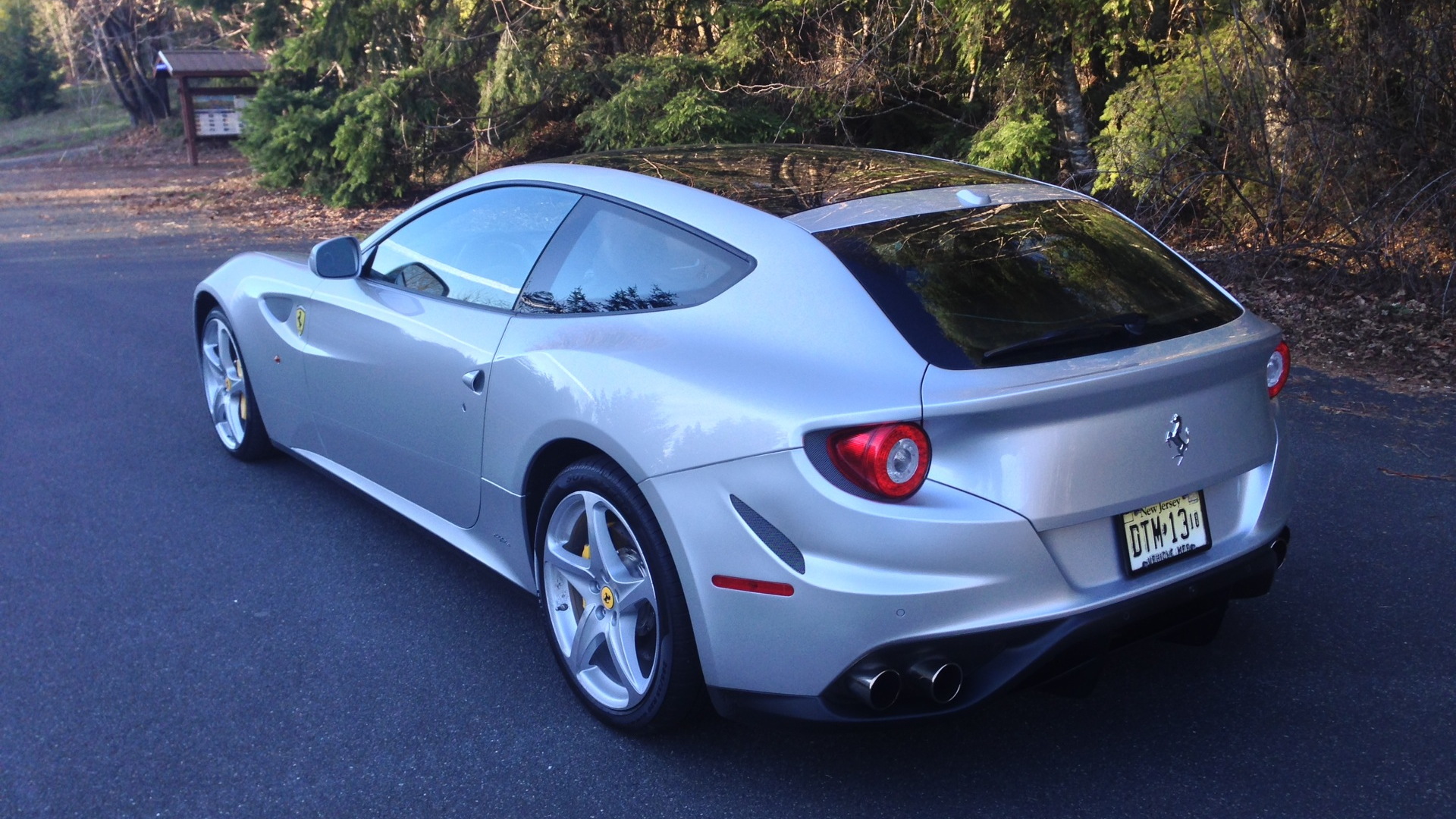 Will actual Ferrari FF owners truly load up the back with groceries? Will they throw their hiking/climbing adventure gear in the back, or their rifle and hunting dog? Will they ever load the whole family in? Throw a ski rack on the roof and take slick highways up to the mountain?

Of course they won’t. So is it pointless to make a practical Ferrari?

I let some of those questions hang over me during several days with an FF this past month, and contemplated doing any of those activities, or putting the FF through anything resembling a normal set of errands. The FF brought added concerns about the possibilities of things like parking dings, of general grime from the outside world reaching the pristine cabin, of speed bumps or ramps the nose lift still couldn’t quite save me from, of parking practically anywhere, of acting out in mere jealousy, or of leaving the keys with a valet,

And then, I decided that those questions are moot; the FF really must be treated like a Ferrari.

The 2015 Ferrari FF remains an outlier, but those very reasons why it’s an outlier make it a must-have in any collector’s garage, whether the collection is one of sports cars, Ferraris, or just rare luxury cars. It’s the only Ferrari in the brand’s history that’s been conceived from the outset to be a shooting brake, and the first one to have had a special four-wheel drive system developed for it.

It may have all those practical things, and look just a half-step from a concept car to some eyes, but it brings all the sensations of a Ferrari from behind the wheel. It has the same exclusivity and gravitas, too.

Sexy throughout, reeled in just the right amount

Which is to say that the entire car, in the way that it’s been designed and conceived, feels like the product of some combination of excess and depravity spliced with engineering perfection. Is there sex in this car? Oh yes, it lives and breathes it—and our car wasn’t even the obligatory Rosso Maranello, I might add—but there’s also a sense that it’s a little more reeled-in until the time is right.

The 651-horsepower, 6.3-liter V-12 whirs with just the right amount of bravado up to about 3,000 rpm, provided you keep your right foot light on the accelerator. Use the manual mode and paddle-shifters, as you should with the F1-derived gearbox, and as you near 5,000 rpm it emits a glorious roar. Stick it out to around 8,000 rpm, and it’s a guttural howl—all as the car, somewhat miraculously, seems to have no issue with traction.

Understanding the FF’s mechanical layout, which some might find simultaneously relatively straightforward and utterly ridiculous, is perhaps the key to understanding how the FF drives the way it does. There’s a smaller, two-speed transmission (plus reverse) in front of the engine, with the main seven-speed gearbox mounted aft; a viscous clutch pack works the magic between the two, and probably go a long way to making brute-force acceleration in the FF remarkably docile—muting the shift shock that you feel in the Nissan GT-R, for instance.

There are pluses and minuses to that—the down side of course is that the FF ends up feeling a bit less like an all-out sports car and more like a touring coupe.

Yet the system has some real advantages. It weighs about 50 percent less than most all-wheel drive systems. And it keeps the weight and traction bias of the car at the rear.

Pushing the FF progressively harder on a twisty mountain road, you can tell that its weight distribution is biased toward the rear (53 percent, according to the spec sheet); yet as you increase the Gs around some of the tightest corners, you feel the four-wheel drive system at work, doing what feels like gently rotating the car while tightening your line.

On faster sweepers, the FF feels every bit like a rear-wheel drive touring sports car. But slow it down, as we did, on the tightest, smoothest hairpin with plenty of runoff, and attempt to find “glorious oversteer” mode—or realistically, anything short of the slight understeer that this car defaults to—and there’s an odd personality change in the car, as the front wheels don’t understeer. There’s a tugging from the front wheels, which seemed to be helping rotate the car, in subtle ways.

In effect, it’s helping you get around corners, but in quite a different way than in most supercars or performance all-wheel drive systems. And while it felt a little juddery around a tight, smooth-pavement hairpin, I can see how this system would shine as soon as the available traction went into the realm of snow, sleet, and rain-slicked roads, allowing something more akin to a drift in which you could tightly control the radius with your hands and right foot. During the time we had the FF, the reliably misty (and snowy in the mountains) Pacific Northwest winter weather was instead crisp, clear, and sun-drenched, sadly.

Once you’re on a road that mixes low-speed corners and high-speed sweepers, things make even more sense. It feels like it’s all about torque flow. Esentially the system doesn’t deliver any power to the front wheels when you’re above fourth gear or about 80 mph, whichever comes first; whereas in lower-speed corners you’re better-served diverting some of that torque to the front wheels.

To your passengers, the FF is remarkably civil, and free of mechanical whines and graunches. There’s something gloriously rebellious about the way the car goes about its business—about all the power on tap, and the animal let out in high-rpm driving that’s kept mild-mannered otherwise. Multiple driving modes affect the ride quality through the magnetorheological shocks, and there’s even a bumpy road mode here that allows a little more compliance.

Although I’ve been up close to the FF before at auto shows and events, as well as out on the street, the other thing that struck me the first time I saw it in my own daily context is how long and wide it looks. It’s more than 193 inches long, and nearly 77 inches wide, yet only about 54 inches tall. Given all the attention that’s been paid to the FF’s snow-driving ability, I expected more ground clearance, yet I actually had to back away from a speed bump that the FF might not have cleared—even with that optional nose lift.

By the way, that hatch really is quite practical. You get a floor that’s definitely not flat, although the trunk capacity is 15.6 cubic feet, expandable to 28.3 cubes with the folding of the seatbacks.

Otherwise, if the 458 Spider that we drove some months ago surprised us with its forgiving nature and brilliant, predictable dynamics, the FF was equally awe-inspiring for its civility and practical side, as it meets that traditional, howling V-12 touring-coupe side of Ferrari heritage. The FF is a car that tracks well, has great seat comfort and decent ride comfort (we cruised in the ‘comfort’ manettino setting and took to the twisties in ‘sport’), and isn’t at all fatiguing to drive near the speed limit. I could have driven it all day, covering vast distance, and not have been worse for wear; and really, I can’t say that for a lot of performance cars.

Our chief complaint of the FF was the old, Chrysler-carryover (or Daimler...it’s from those days) head unit—until we found that the car we were driving was technically a 2014 model and thus didn’t have what’s the perhaps the most important upgrade for 2015: a new head unit. Ferrari claims that the FF is the first car in the world to be offered with CarPlay, and the new system allows access through core functions and apps—like for maps, messages, and calling—through the vehicle’s screen, as a remote extension.

Ferrari, of course, operates on the idea that buyers are going to check a lot of option boxes and customization boxes and end up with a car that’s unlike any other one in appearance and build. Yet just be prepared to not at all think in terms of the base price.

By adding a liberal amount of the optional equipment—some of it moderately pricey, other pieces of it just plain gasp-inducing—you can blow past the $350k mark. Our test car, which included things like plush semi-anilene leather with a diamond-quilted pattern; a Passenger Display that costs more than $4,000 and allows your passenger to see your speed and revs; and an $18k panoramic roof—yes, that’s almost the cost of a MINI Cooper. The lift kit, a must given the ‘practical Ferrari’ image and lack of clearance in stock form, costs $5,779 and also requires the Advanced Frontlighting System Headlights—another $2,023, so raising the price by $7,802.

The Ferrari FF is simply a beautiful car, a rolling piece of art, and pretty much everything you might expect in something with the prancing-horse pedigree. To a lifelong shooting-brake fan like me, just the potential for all those practical uses makes it brilliant, and the zenith as worlds collide.