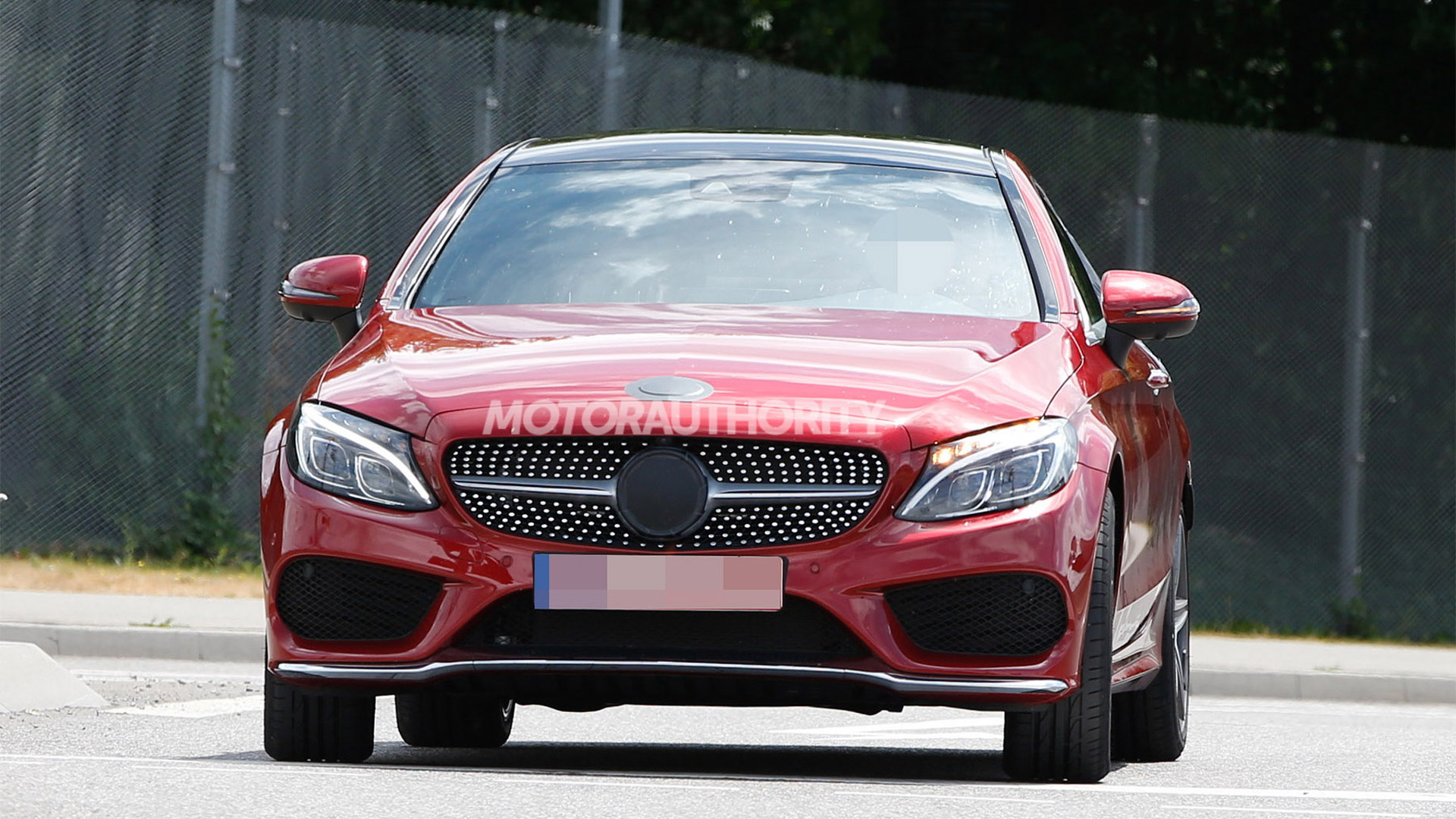 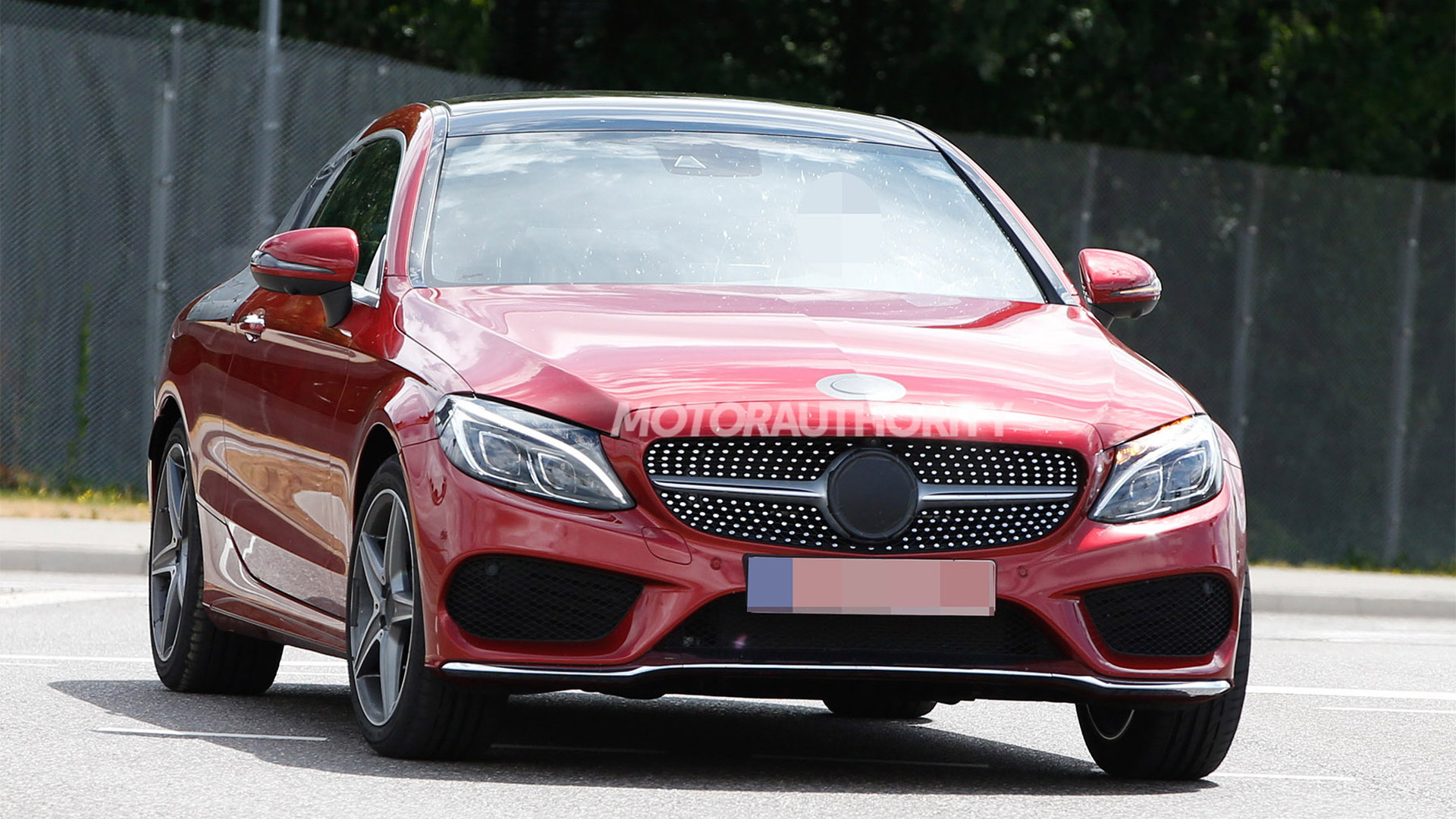 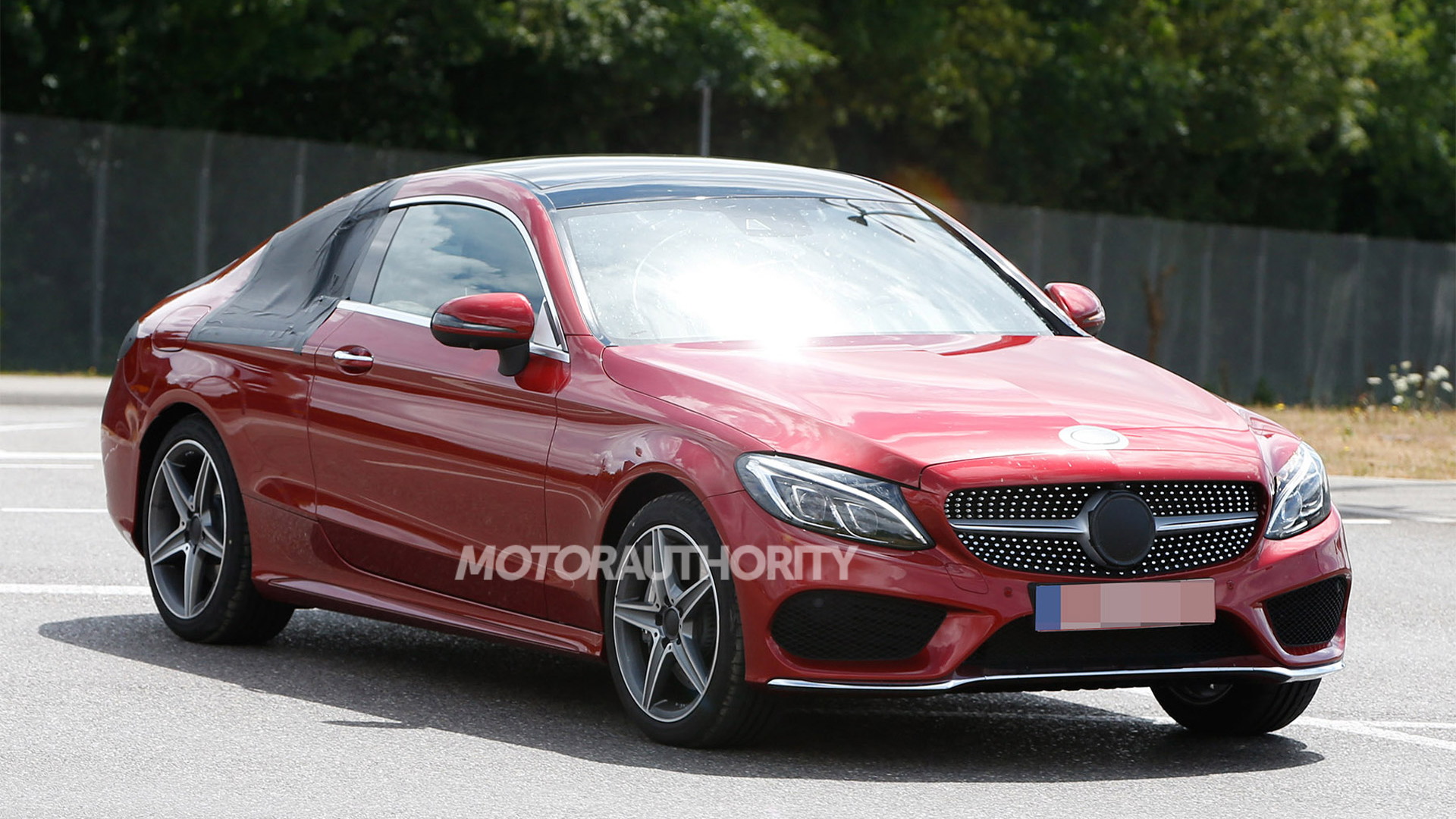 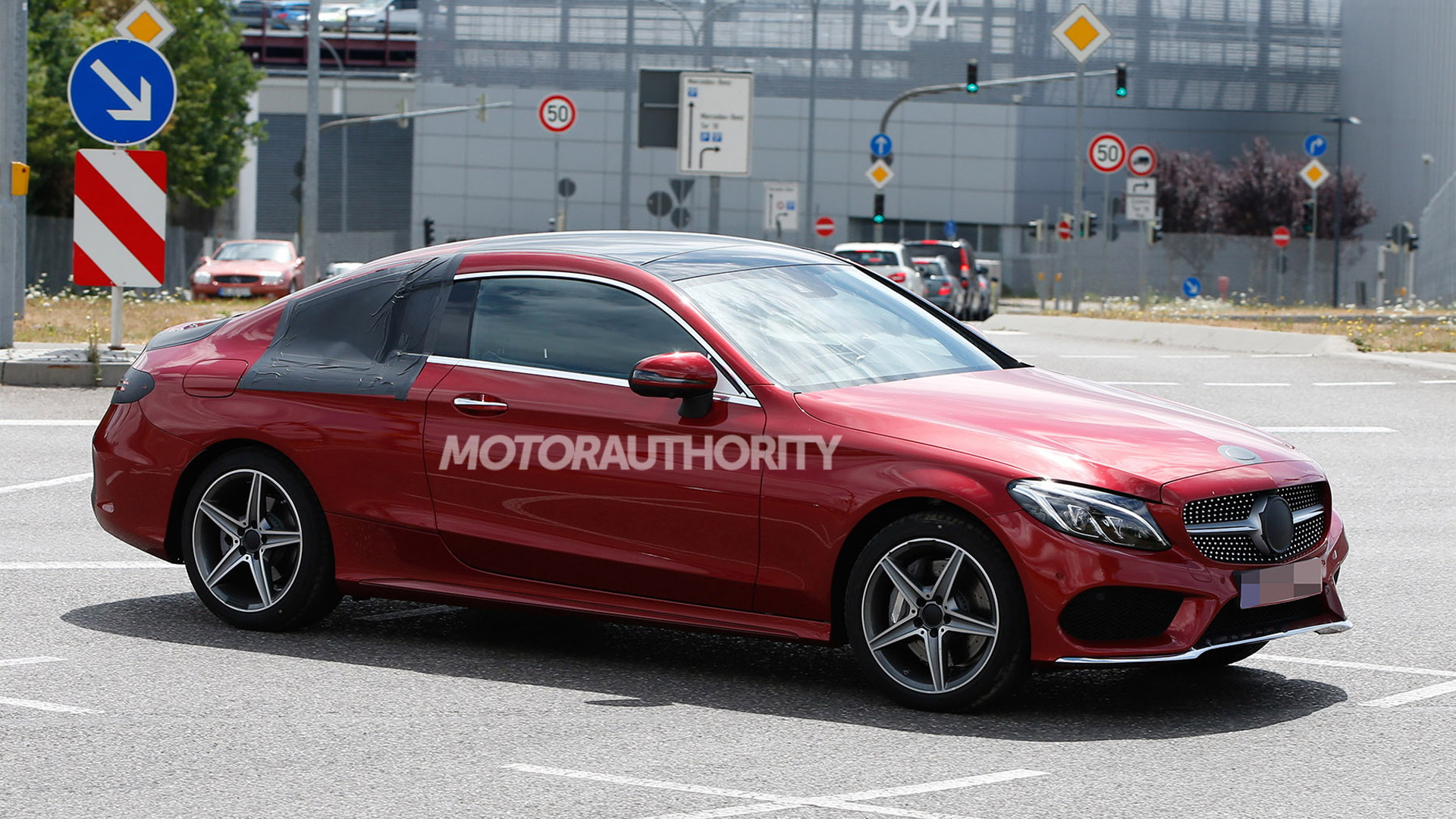 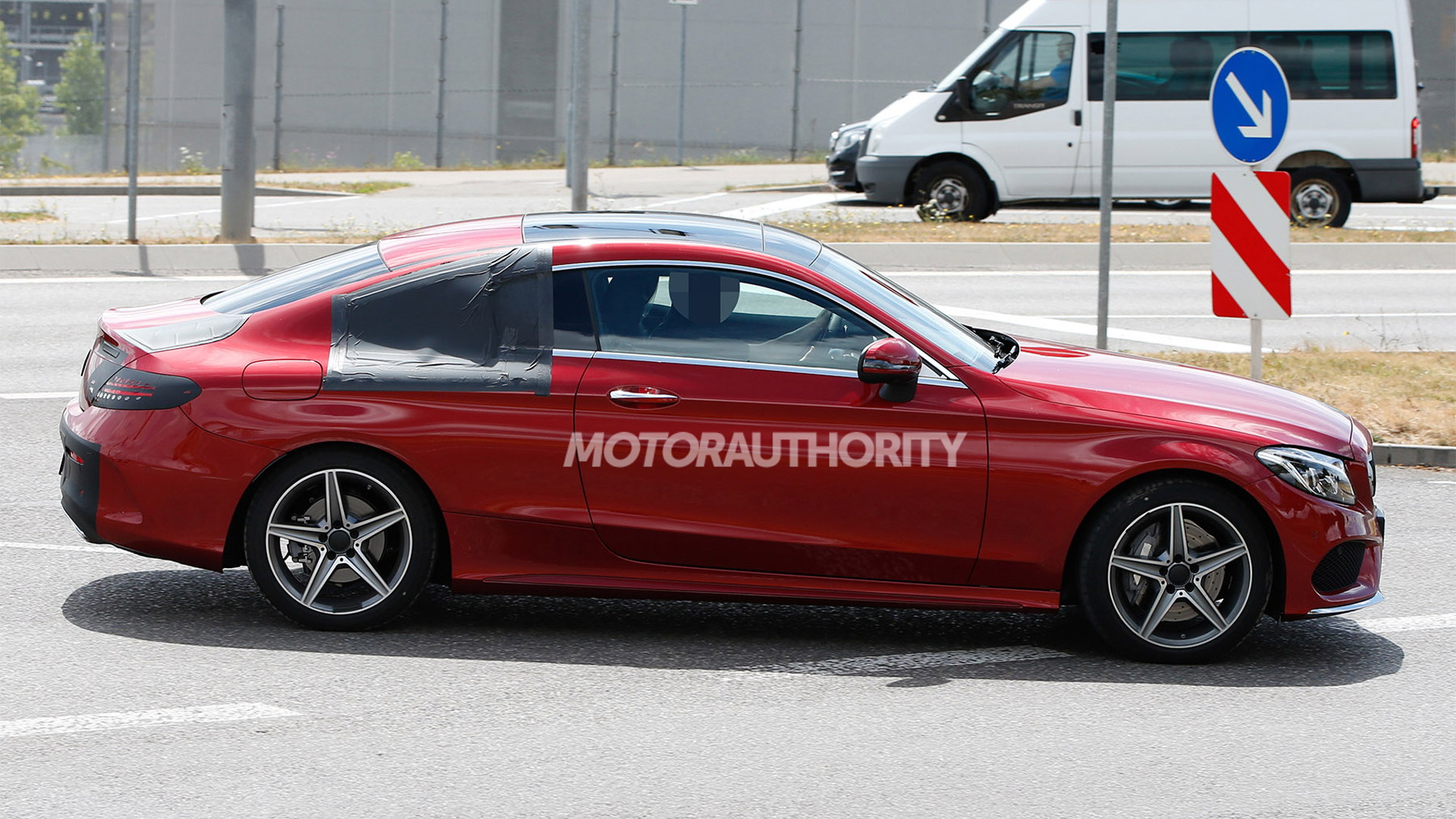 The new Mercedes-Benz C-Class Coupe is set for a debut at the 2015 Frankfurt Auto Show, and our spies have the latest shots of the new two-door, well in advance of the mid-September show. In these new shots, the car is almost completely undisguised, with only a little camouflage gear hiding its C-pillar.

The new C-Class Coupe will debut in Frankfurt in both regular and Mercedes-AMG flavors, and we’re likely to see the cars in showrooms by the spring of 2016, though it’s also possible the sales launch may be delayed until later that year. The cars will arrive as 2017 model year vehicles here in the United States.

The look of this traditional coupe is clearly derived from that of the svelte C-Class sedan, though most of the lines are unique, with the sculpted two-door body looking very similar to that of the stunning S-Class Coupe.

Mechanically, the C-Class Coupe should be virtually identical to the C-Class sedan, with Mercedes’ new MRA modular rear-wheel-drive platform forming the basis. The automaker's 4Matic all-wheel drive will be available, as should a host of electronic driver aids including some semi-autonomous features.

Look for a 241-horsepower four-cylinder engine in the base model, likely badged a C300, and a V-6 in C400 trim. A sporty C450 AMG model with a 362-hp V-6 should also be offered as well as the aforementioned C63 Coupe from Mercedes-AMG. The latter will be the sole V-8 in the lineup, sharing its twin-turbocharged 4.0-liter engine with the C63 sedan (available with 469 or 503 hp). Look for seven-speed automatic transmissions to be fitted across the range.

Inside will be a 2+2 seat layout and a dash that resembles the one in the C-Class sedan. Engineers are working to get the all-digital dash from the S-Class into the C-Class but we can’t confirm whether it will be available for the launch of the new two-door C-Class models. That’s right, there will be more than one two-door C-Class this time around. Look for a new C-Class Cabriolet to join this C-Class coupe in Mercedes showrooms next year. Key rivals include the BMW 4-Series, Cadillac ATS Coupe, Infiniti Q60 and Lexus RC.