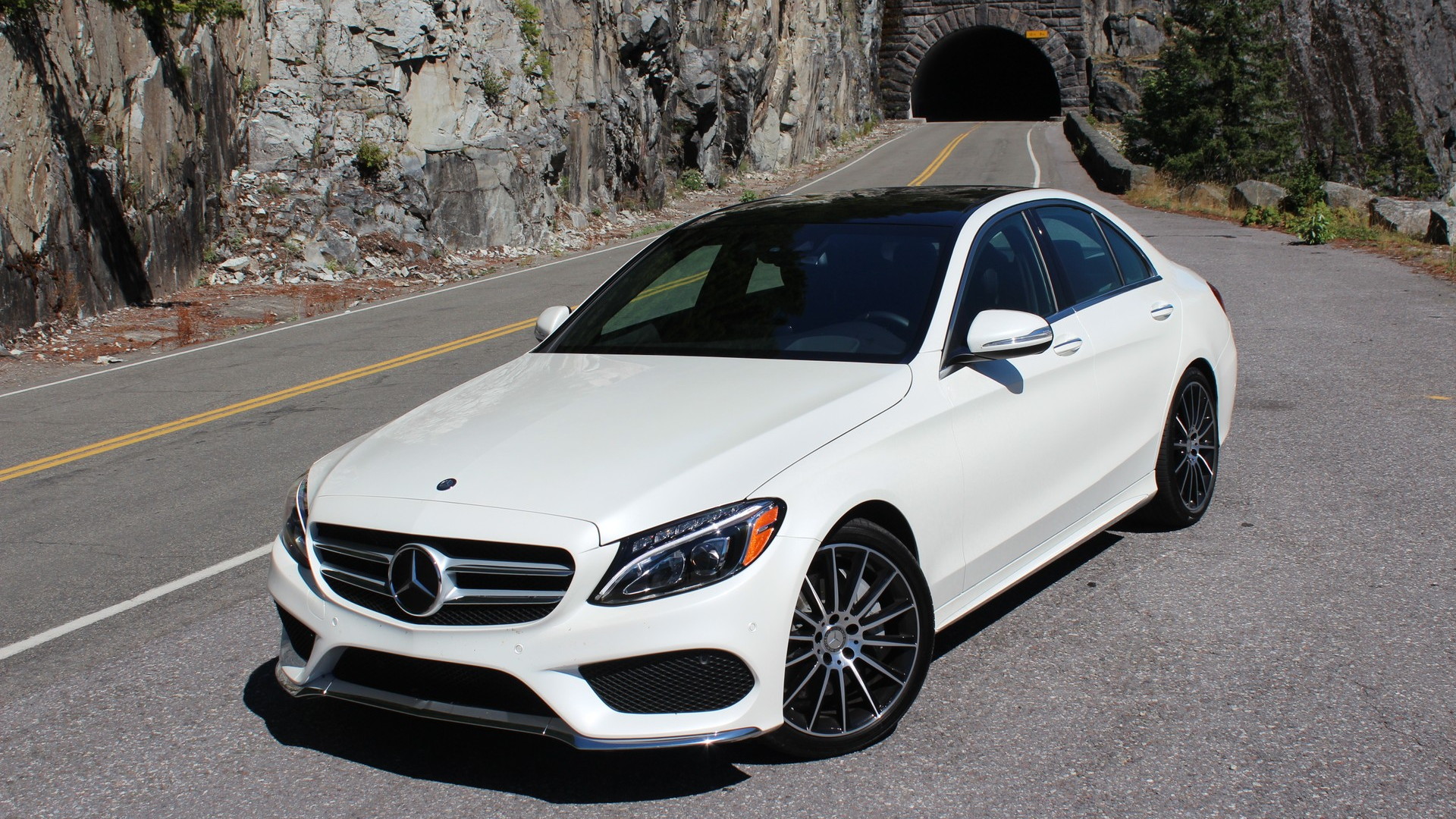 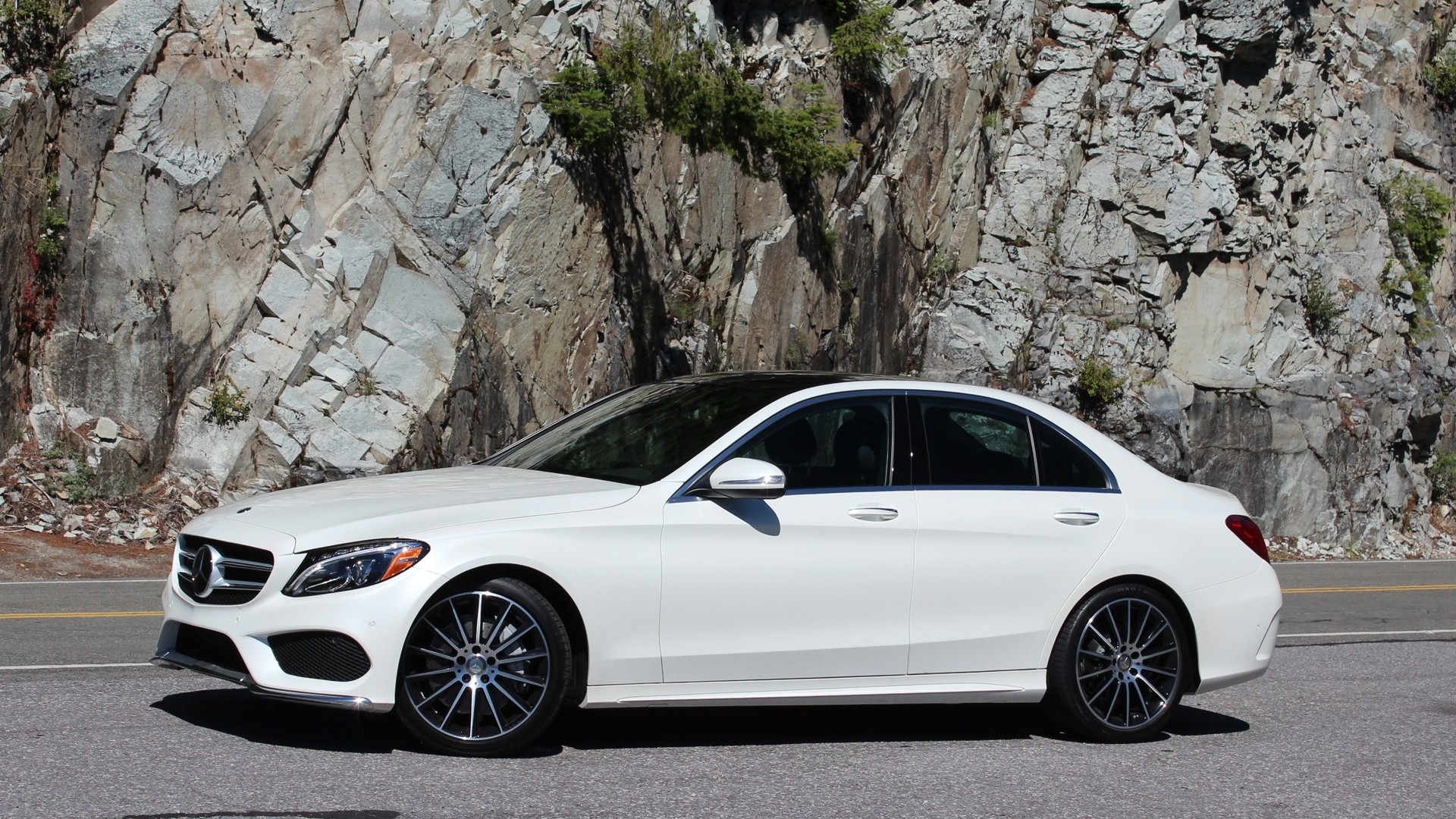 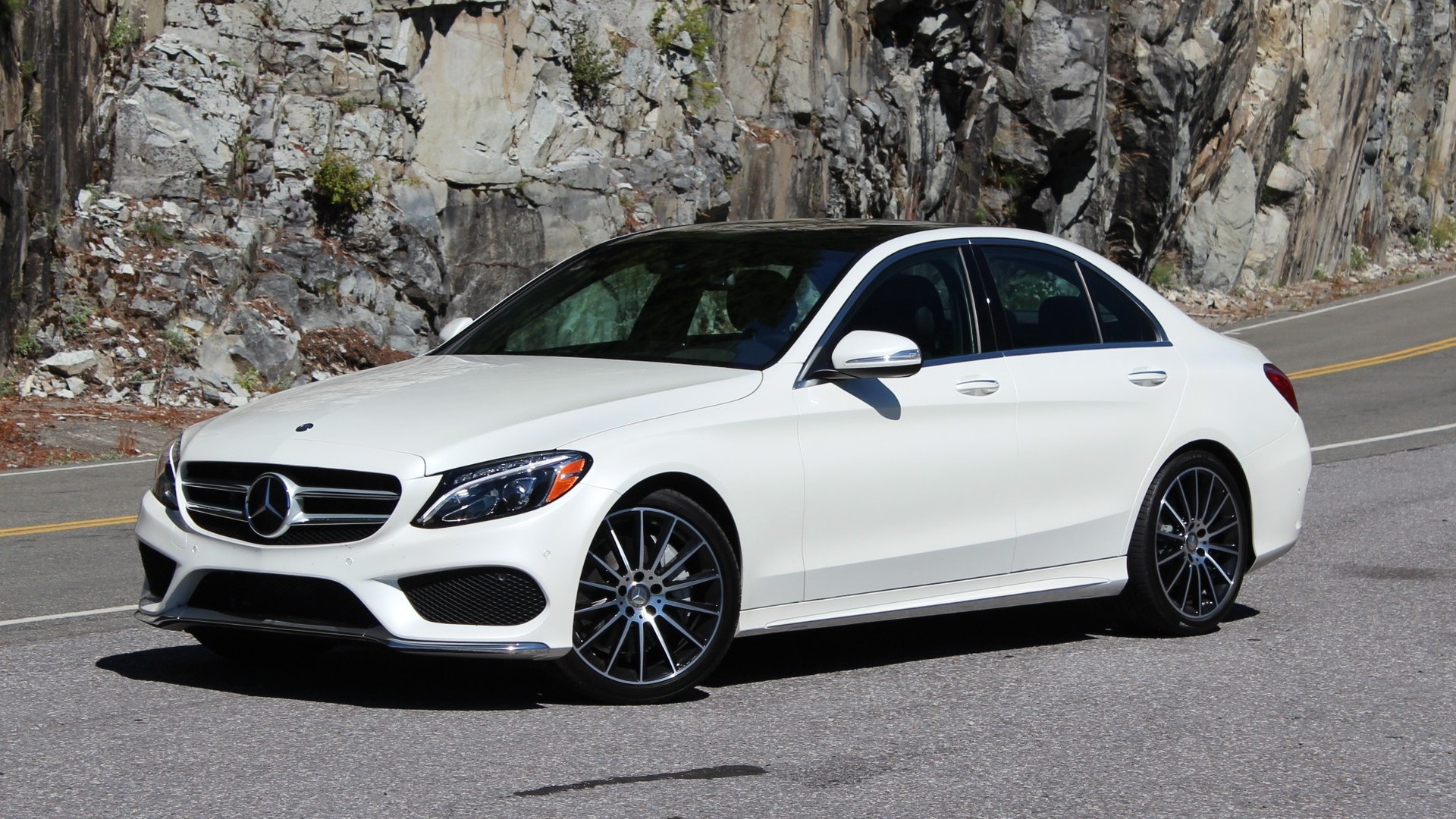 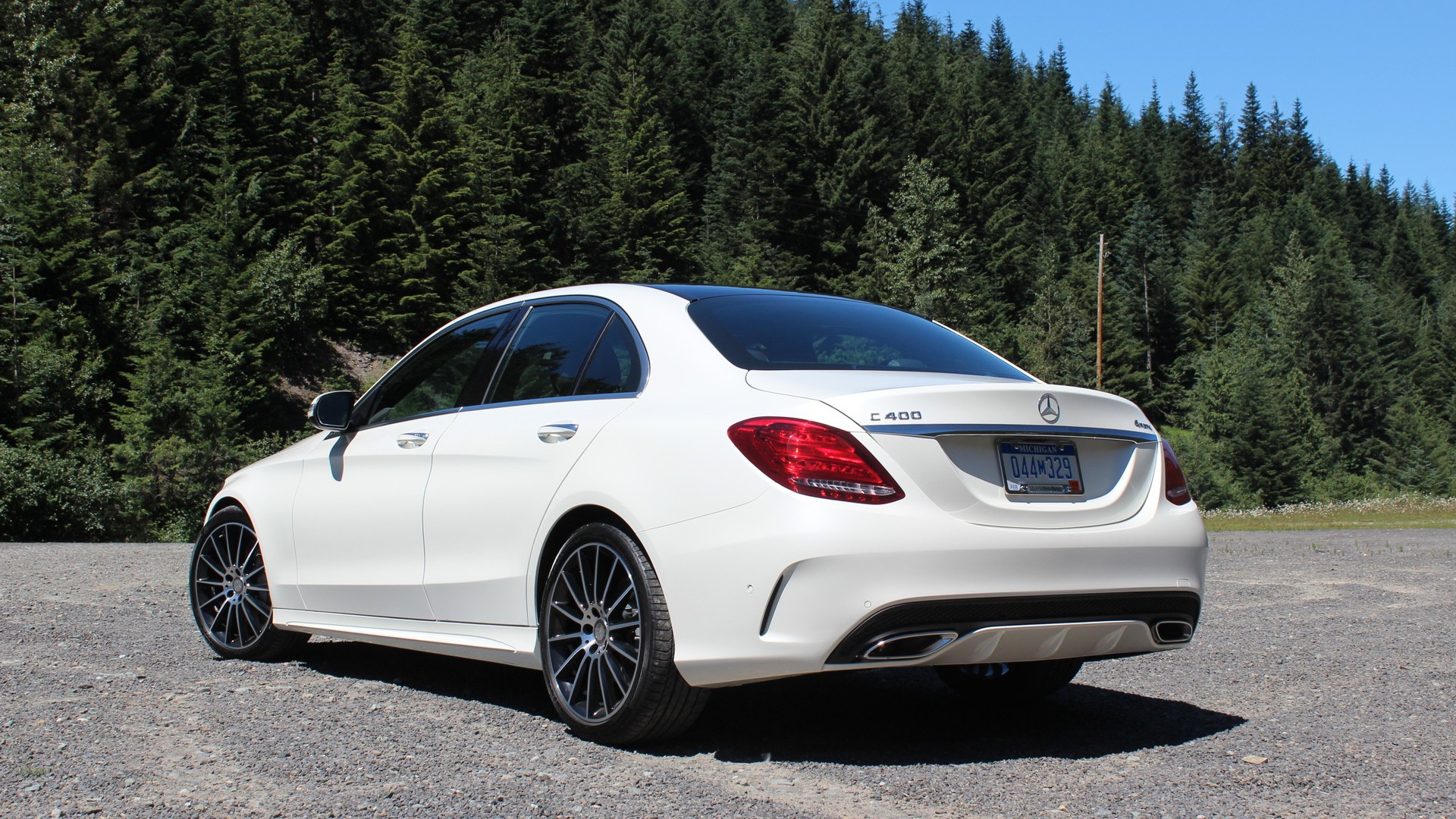 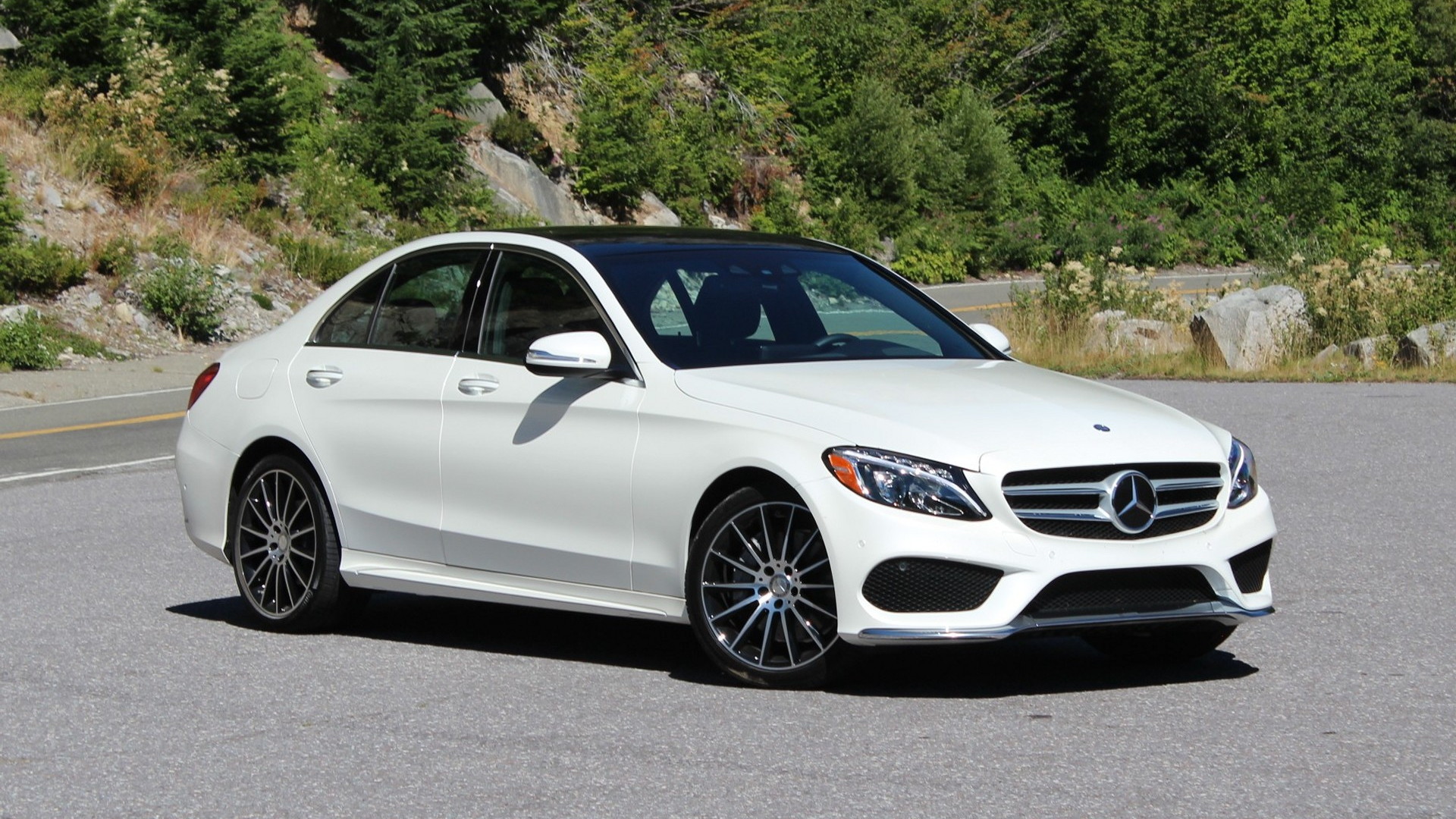 Gliding through the natural beauty and cultured history of Provence, along glass-smooth strips of winding asphalt under castle-dotted mountains, it’s easy to lose touch with reality.

In a way, the high-tech, high-style 2015 Mercedes-Benz C-Class is a microcosm of this unreal Provençal sensibility; it’s beautiful, steeped in history, and yet completely modern as well.

Fortunately, the 2015 C-Class engages and draws you into the present, even drawing you out of your reverie should your attention wander. It’s Mercedes-Benz’s best small luxury sedan yet, and it’s the best car we’ve driven in the segment.

At a glance, the 2015 Mercedes-Benz C-Class is beautiful. Look closer, and that perception deepens. From the aggressive but not angry face to the sculpted hood and sides, over the architecturally arched roofline into the taut, balanced tail, the exterior of the new C-Class is S-Class in miniature, feeling every bit as elegant as the brand’s flagship—just more compact.

Inside, the theme continues, with Mercedes’ new round-vent and waterfall-console themes executed in materials that range from satisfying to truly impressive. Even in models closer to base specification—where rubbered plastics and piano-black finishes meet MB Tex synthetic upholstery, the sense of quality and careful design shine through; outfitted with a full leather interior and wood or aluminum trim, the C-Class’s cabin truly rises into the premium ranks, despite its mainstream size. Of particular note is an available open-pore Ash wood trim used as the backing surface to the entire curved center stack around the speakers and door pulls. This option recalls some of Mercedes most elegant cars of the late 1960s with its textural grain, while its satin finish draws on the best of modern in-car aesthetics.

Space is nearly as abundant as style, too, with the C-Class growing slightly this time around, up 3.7 inches in length, 3.0 inches in wheelbase, and 1.6 inches in width for 2015. The most noticeable improvement is in the rear seat’s leg room, which, while still a close fit for those over six feet, can hold even rather tall adults in comfort, without splayed legs or heads rubbing headliners. The front row offers plenty of space for the larger adult, as well as ample adjustability for drivers of nearly any proportions, thanks to a multi-adjustable seat and power-adjust tilt/telescoping steering wheel.

Underpinning all of this is an Airmatic suspension, which will be optional on U.S.-market C300 models and standard on the C400. Combining a clever progressive-rate air spring system controlled by adjustable-rate hydraulic dampers, the Airmatic suspension marries the comfort and ease you want in a luxury sedan with the body control and minimal lean of a sport sedan. Some of the credit for the balance between comfort and capability is owed to weight reduction: the 2015 C-Class is up to 220 pounds lighter than its predecessor.

Even in its sharpest Sport+ mode, however, the Airmatic system is not tuned for edgy performance—but that just leaves room for the next C-Class AMG, which is due to arrive in less than a year.

The U.S. will receive two versions of the 2015 C-Class at launch, both equipped with standard 4Matic all-wheel-drive. In the C300, a 2.0-liter turbocharged four-cylinder provides 241 horsepower and 273 pound-feet of torque. The C400 upgrades to a 329-horsepower, 354-pound-foot 3.0-liter turbocharged V-6.

During our stints behind the wheel in and around Marseilles, we found the C400’s turbo V-6  a fun and willing companion in hustling the C-Class at a brisk pace. The seven-speed automatic transmission, with or without use of the steering-wheel-mounted paddle shifters, handles the shifts with precision and quickness, though when the pace slackened a bit, we did notice a few rough shifts—perhaps issues for the software still to work out before the car’s retail sales launch this fall.

The U.S.-market C300 wasn’t available during the first drive event, though the same engine, detuned to about 35 fewer horses and pound-feet in the European-spec C250, still feels peppy under the hood of the 2015 C-Class. In American C300 trim, it should be plenty quick, and a marked upgrade from the rather uninspired performance of the 1.8-liter turbocharged four-cylinder in the previous American C250.

Suspension and transmission responses can be adjusted through a range from Eco to Comfort to Sport to Sport+. Eco mode slows the cars responses in an effort to extract maximum efficiency, and while it does make the car feel more sluggish, it’s done in a way that you’re unlikely to notice when trudging through city traffic—the optimal time to enhance efficiency. In Comfort mode, the powertrain response is re-awakened, but responsiveness is smoothed. In Sport and Sport+ modes, throttle response is made sharper, Airmatic-equipped models become firmer (and in Sport+ mode, 15 mm lower), and the transmission gets just a touch more aggressive in its shift quality. When set to its most aggressive mode, the 2015 C-Class is engaging and fun to drive through a winding canyon pass, but it doesn’t exhibit the sharper edges of a true sport sedan.

Like most modern luxury sedans, the 2015 C-Class uses electric-assist power steering. Like most electric-assist power steering, the driver’s feel for the behavior of the front wheels’ contact patches is somewhat muted, but the steering rack’s variable ratio is spot-on, ramping up steering rate in a progressive and predictable manner. In 4Matic models, the extra tractive power sent to the front wheels, along with a little more weight on the nose in V-6 form, serves to further reduce steering feel, but the rear-drive four-cylinder model’s steering is noticeably lighter and more communicative—and yes, the U.S. will get a rear-drive version of the C300 a few months after the 4Matic-only model is launched.

As much as the exterior and interior of the 2015 Mercedes-Benz C-Class speaks of a new level of luxury and design, the technology hidden just beneath the surface—and especially the safety-oriented aspects of that tech—truly move the C-Class on par with its larger stablemates, the E-Class and S-Class.

Mercedes’ Intelligent Drive suite of safety gear, including Distronic Plus radar adaptive cruise control and steering assist, a stereo-camera-based lane-keeping assist function, and BAS Plus brake assist with cross-traffic function, matches features found on Mercedes’ more expensive models. On top of these features, available safety extras include Active Parking Assist, which automates parking in parallel or perpendicular spaces; a 360-degree camera that provides views from several points around the vehicle as well as a top-down bird’s eye view that we found to be remarkably detailed and accurate; and Traffic Sign Assist with Wrong-Way Alert, a system that reads speed limit, no-passing, no-entry, and other road signs and relays the information to the driver.

Also new to the C-Class is a head-up display, which can display a range of information, including navigation directions, speed, RPMs, gear selection, and more.

The COMAND infotainment system also receives some upgrades, coming with a standard 7-inch display (or an optional 8.4-inch display with the Multimedia package); Mercedes’ mbrace2 app suite; and a new touch-sensitive pad controller hovering over the traditional COMAND dial control.

This last feature, the touchpad, allows gestural input, including swipes, pinch-zoom, taps, and more. While it’s a more intuitive way to interact with the screen than the dial-controlled method of older COMAND systems, we found it to offer a bit of a learning curve at first to determine which gestures, taps, and clicks work to perform which actions in each of the many screens offered in the COMAND system. We also noticed a tendency to accidentally touch the touch-sensitive portion of the controller when trying to use the dial controller below, sometimes diverting us into unintended menus and options.

After a week’s use, the touchpad’s learning curve is likely to be solved, and the addition of touch and gestures a welcome boon to the COMAND interface, but ultimately, we still have to ask: why not just offer the display—which already looks rather like a tablet sat atop the dash—with a touchscreen? Mercedes responds to our query with talk of safety and attention, but we still have to think it would be yet more intuitive and natural to interact with the display in the way we use our phones, tablets, and desktop all-in-one PCs.

Minor interface gripes aside, the 2015 C-Class offers several other features of note to the technophile—especially the audiophile. An available Burmester sound system turns the cabin into a listening studio, delivering clear and precise representations of your music, whether it’s from the CD player, radio, or piped over Bluetooth from your mobile device. The base stereo system uses Mercedes’ Frontbass system, which puts subwoofers under the front passengers’ footwell, as well as using the spaces within the side cross-member and body structure as resonance chambers for other speakers. For the olfactory enthusiast, Mercedes-Benz even offers the scent-dispersing air freshener system housed in the glove box—another feature drawn down from the S-Class—in the new C.

Between the new structure and engines, the gorgeous styling inside and out, and the upgrades to technology and safety, Mercedes-Benz is making a bold attempt to package similar levels of luxury and features in the C-Class as you’ll find in the E-Class and S-Class. While the smaller price tag means the sumptuous and even decadent feel of the larger sedans is muted in the C-Class, the sense the owner will get is one of unity: moving up the range is not so much about upgrading to greater technical capability, but to larger, more powerful, more exclusive vehicles.

Spending time in the 2015 Mercedes-Benz C-Class, whether in Provence or Pennsylvania, in Marseilles or Milwaukee, is to experience a bending in reality, powering along in a car that feels like it's worth twice its likely price tag. But it’s a good bend, and one we’d like to see other luxury brands make with their smaller cars.

For now, however, it’s the 2015 Mercedes-Benz C-Class that we’re watching for our Best Car To Buy 2015 award later this year.