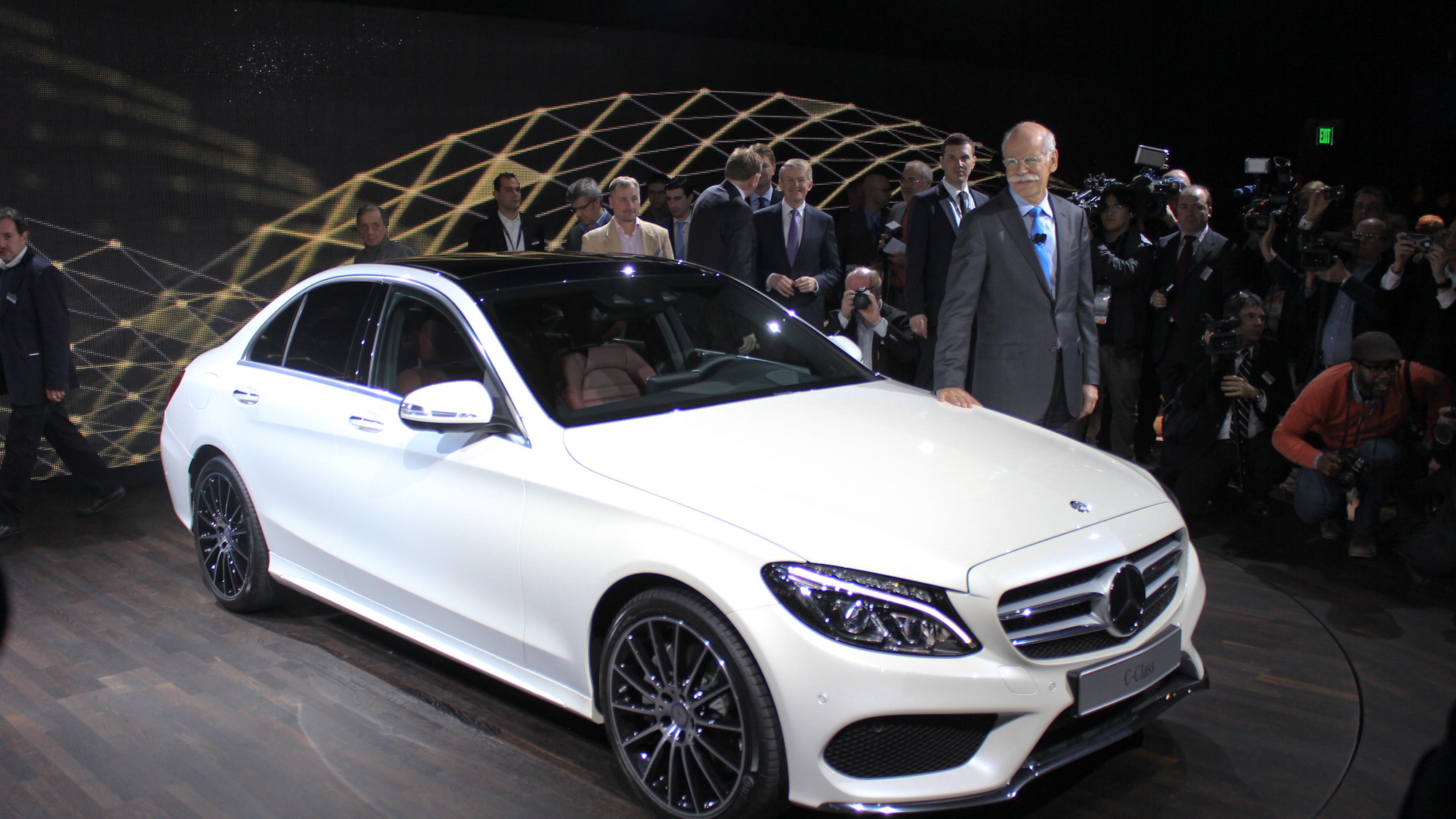 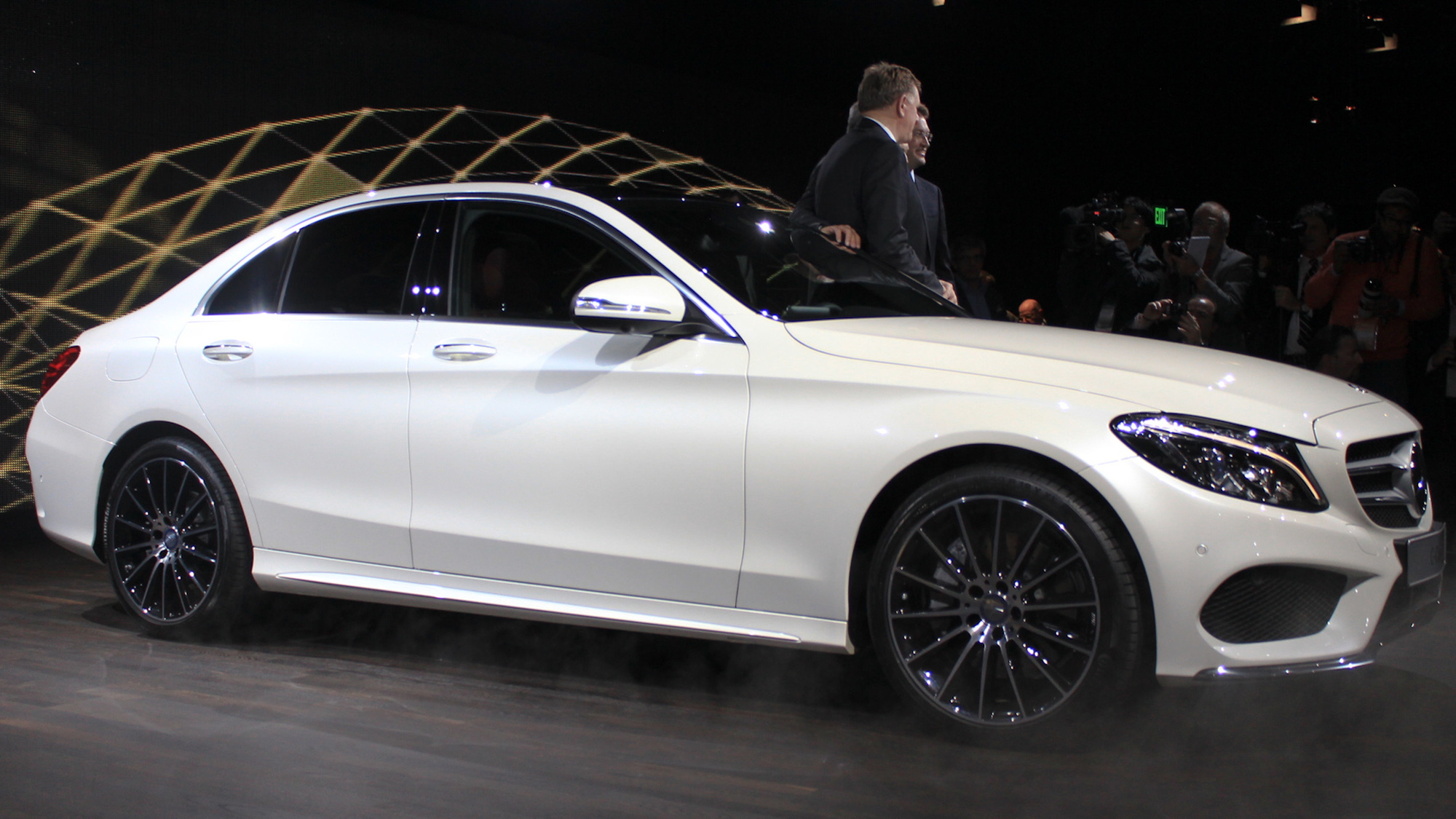 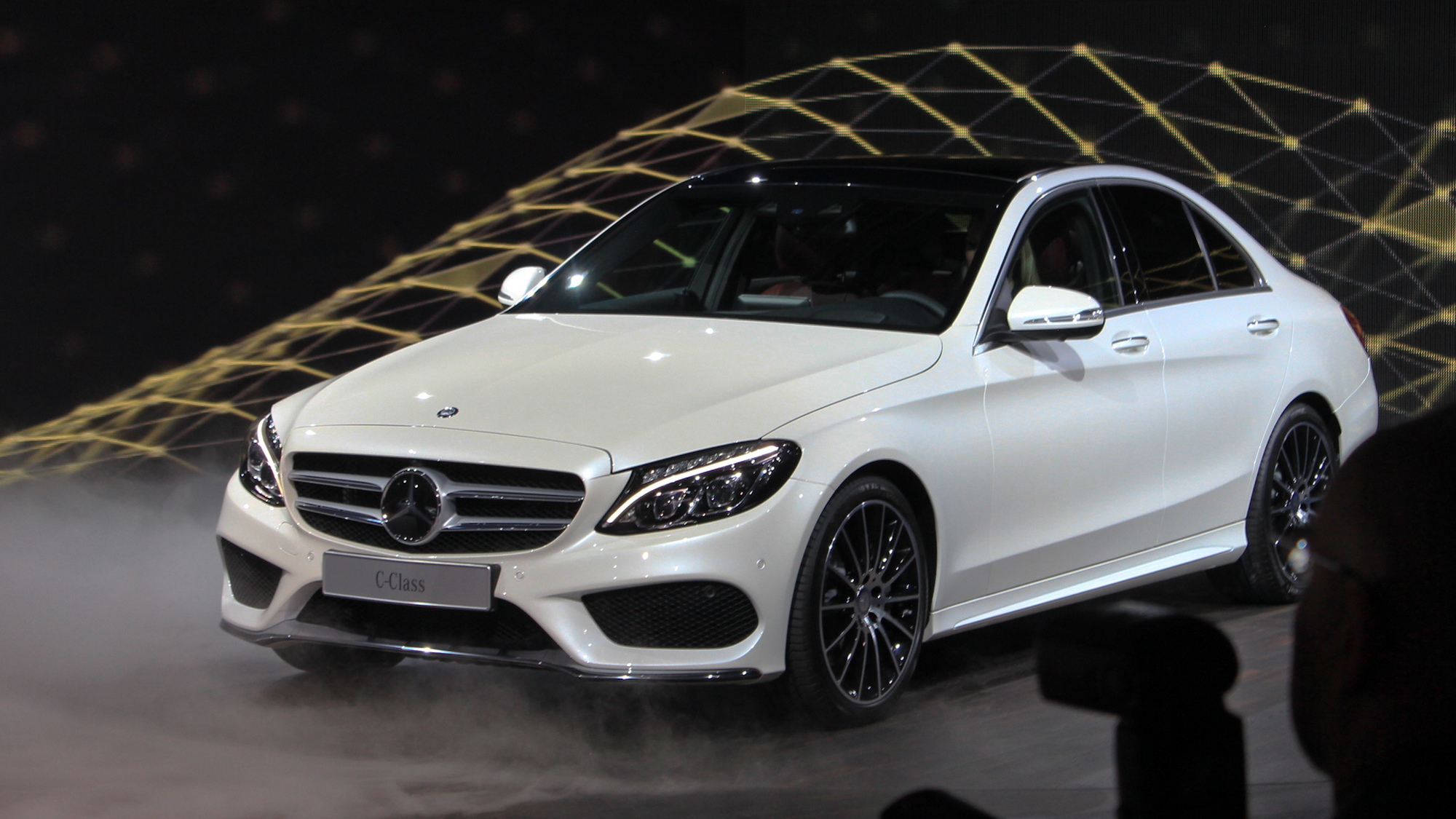 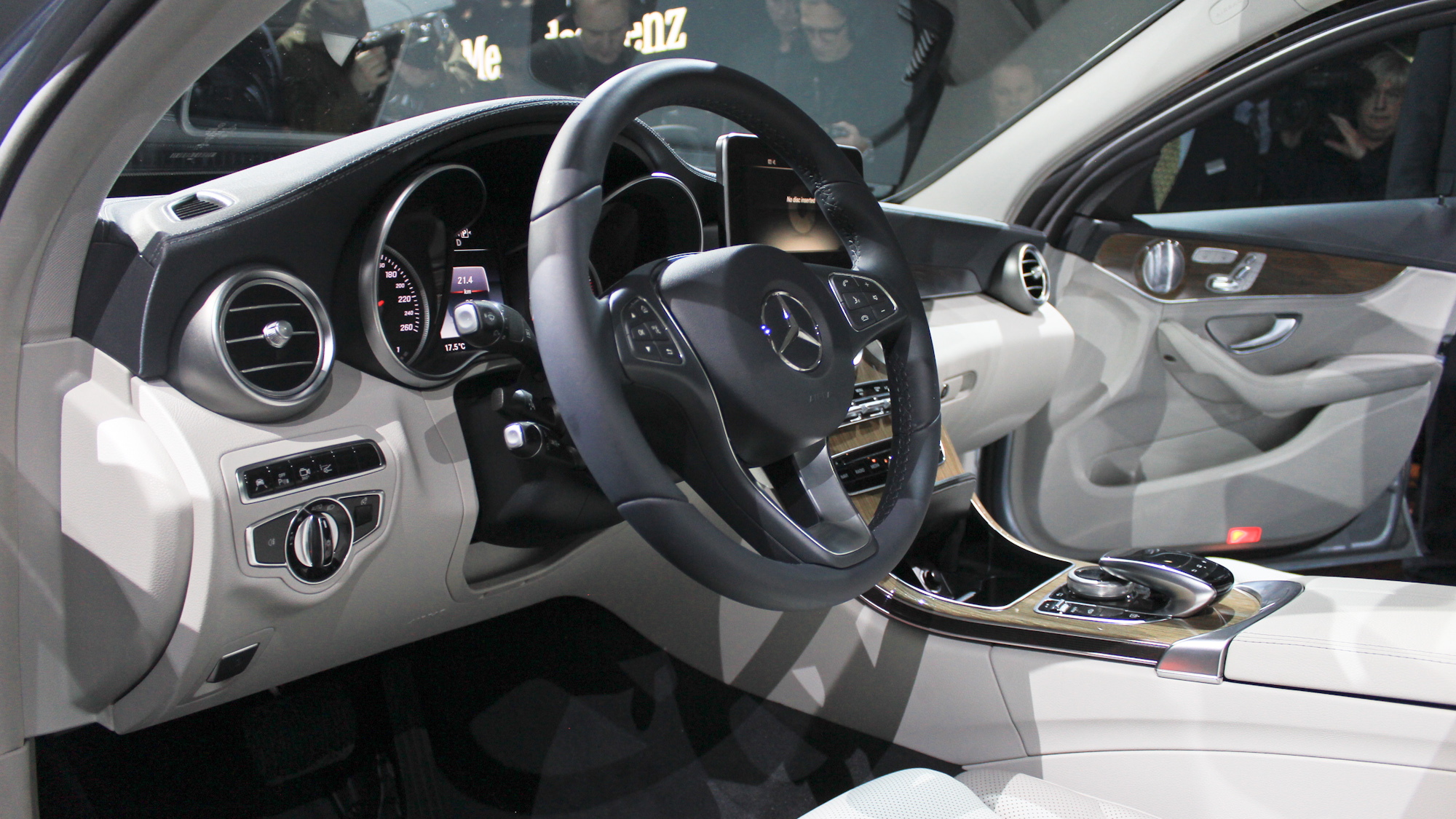 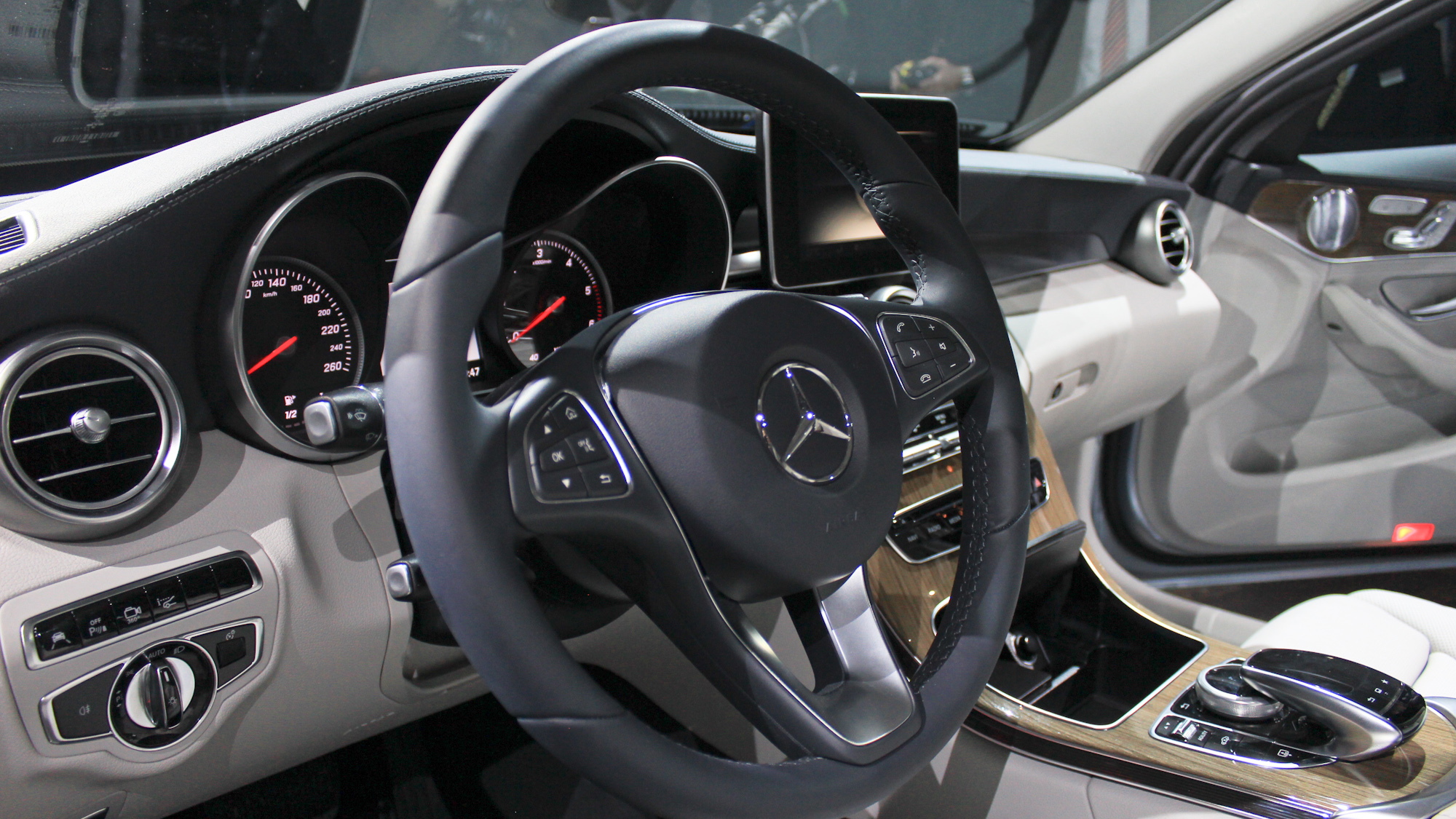 39
photos
There's a new C-Class coming, and it's beautiful. It's also lighter, more powerful, with standard all-wheel drive, and packing several new high-tech safety features. The 2015 Mercedes-Benz C-Class will make its official public debut at the 2014 Detroit Auto Show this Monday. Today, we add to the high-res gallery of studio photos with live images of the car from its private unveiling in Detroit ahead of the 2014 Detroit Auto Show.

There are only a few things we don't know about the new C-Class so far. At the top of that short list are price and gas mileage. Whether those figures will materialize upon the car's official unveiling in Detroit next week, or if they'll wait until closer to the car's launch later in the year remains to be seen.

What we do know about the 2015 C-Class is that it looks very, very good--almost like a smaller S-Class, and if you've forgotten how good that car is, go remind yourself.

Inside and out, the new C-Class presents a fresher, more luxurious face, with a bold but still tasteful exterior and a cabin that looks at least one big notch more luxurious than the last car. Of course, final judgment will be reserved until we've laid hands on it ourselves.

Under the hood of the new 2015 C-Class, you'll find one of two engines: a 235-horsepower, 273-pound-foot 2.0-liter turbocharged four-cylinder in C300 trim; or a 329-horsepower, 354-pound-foot 3.0-liter turbocharged V-6 in C400 trim. Both engines use direct injection in addition to turbocharging, and both are paired to a 7G-Tronic Plus seven-speed automatic transmission. Mercedes' 4Matic all-wheel-drive system is standard on all U.S.-bound C-Class for the 2015 model year.

Those power figures should complement the new chassis well, as it loses 220 pounds in total--154 of those pounds from the body structure alone--due to the use of about 40 percent more aluminum in place of steel in its construction. That weight savings has been achieved in spite of a rather significant growth in the car's exterior dimensions; the 2015 C-Class is 3.7 inches longer, 1.6 inches wider, and has 3.0 inches more wheelbase than the previous model.

Beyond the performance upgrades, the new 2015 C-Class should also be the safest C-Class yet, with a host of safety features that were only recently launched on the S-Class and E-Class arriving in their smaller counterpart. Among the new features are standard-equipment including: Attention Assist; and Collision Prevention Assist Plus, which helps to brake the car if a collision is deemed imminent by the car's sensors, capable of autonomous braking from speeds up to 124 mph, and completely preventing rear-end collisions at speeds up to 25 mph. Optional safety extras include Distronic Plus, BAS Plus Brake Assist System, and Enhanced Active Lane Keeping Assist. Other safety enhancements available include Active Parking Assist; a 360-degree camera; and Traffic Sign Assist, which can read traffic signs to warn of speed limits, no-passing zones, no-entry signs, and more.

On the more entertaining side of the 2015 Mercedes-Benz C-Class's technology is the COMAND infotainment system, installed in either the standard 7-inch display or the optional 8.4-inch display offered as part of the Multimedia package. Mercedes' mbrace2 apps and connectivity technology is also baked into the COMAND system, with the option to have over twenty Mercedes Benz Apps integrated from the factory.

Look for more details, including live photos, video, and more, live from the debut of the 2015 Mercedes-Benz C-Class at the 2014 Detroit Auto Show this week.

You can also see the new 2015 C-Class in action in the official videos below.