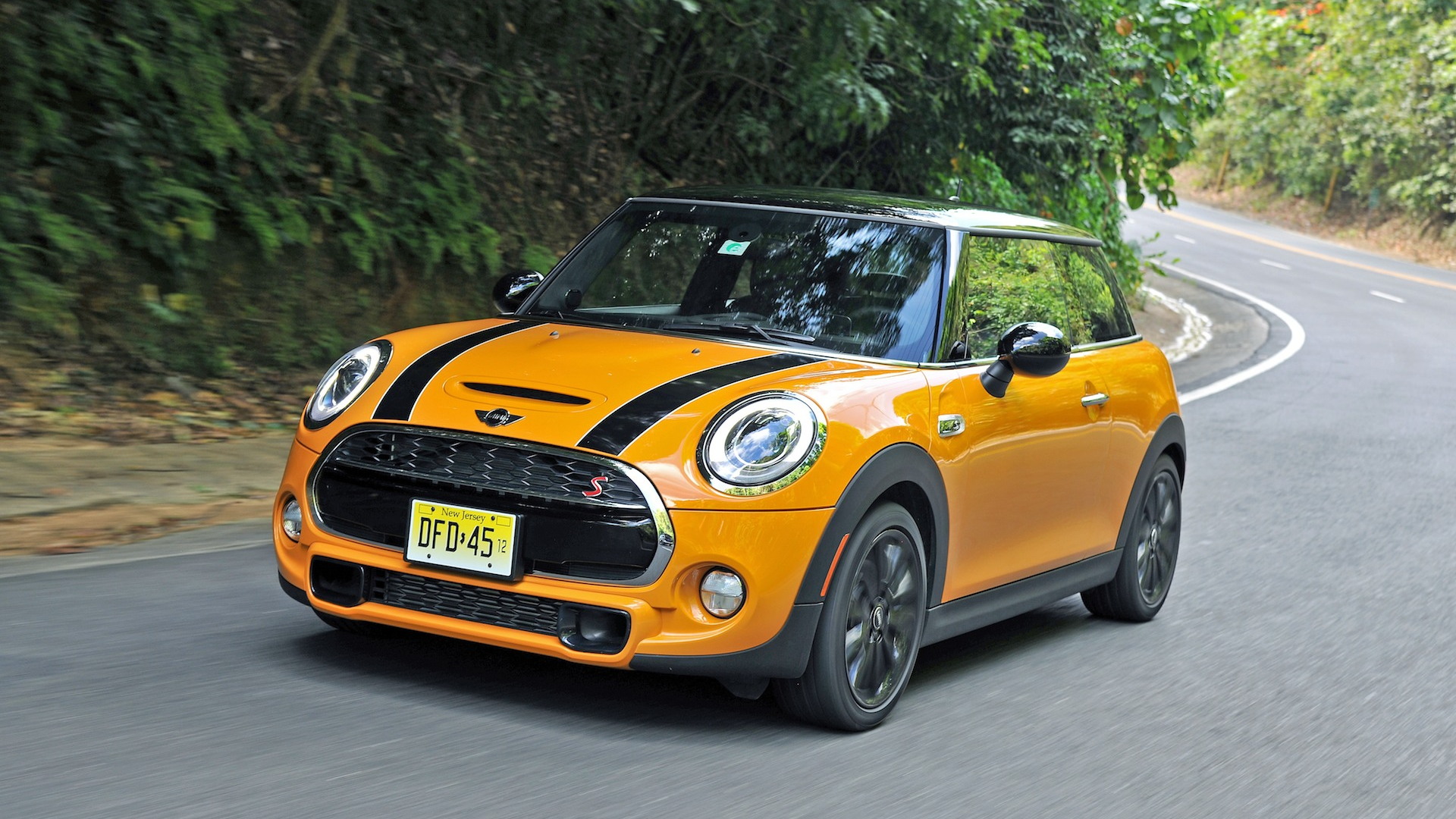 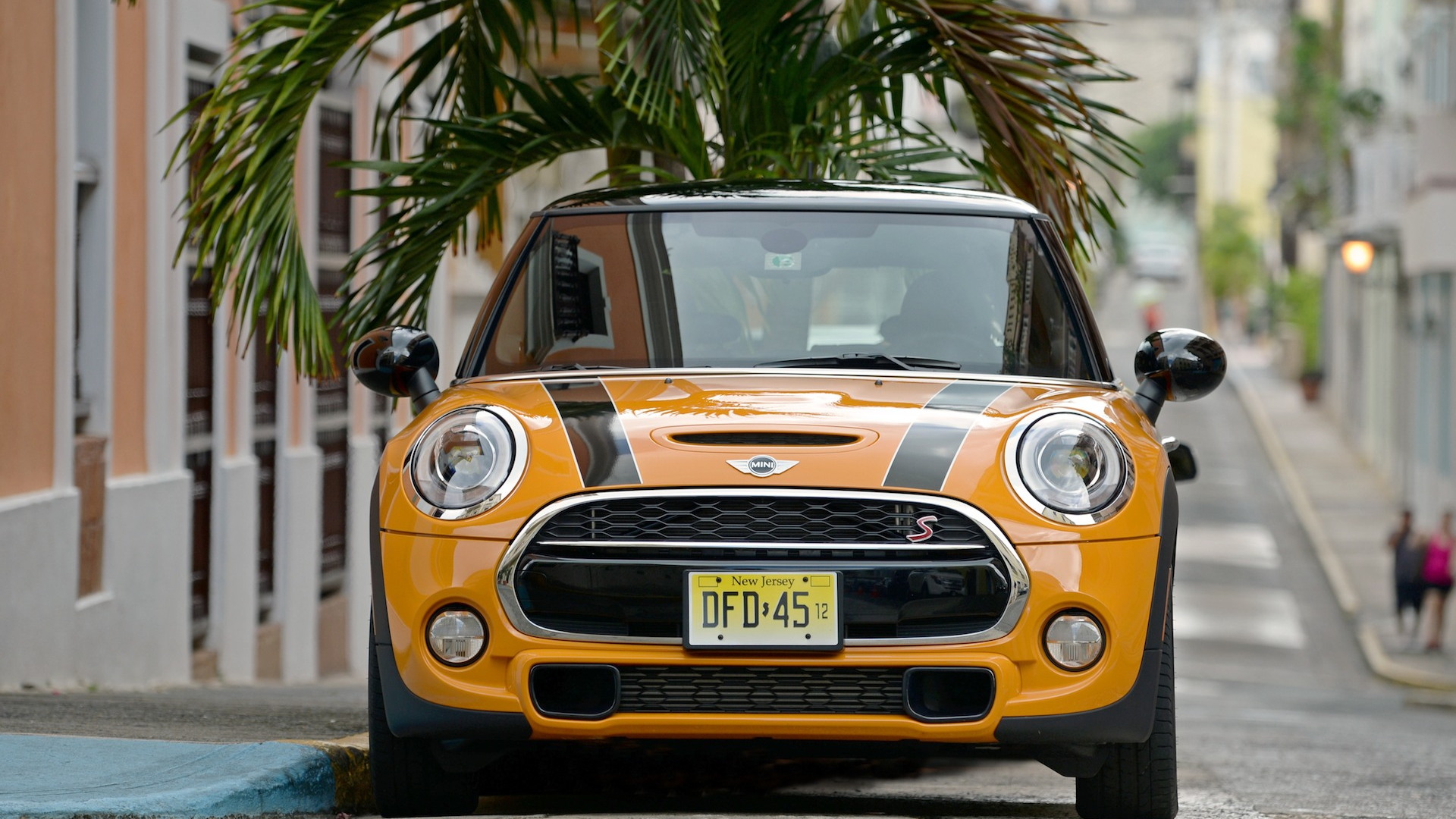 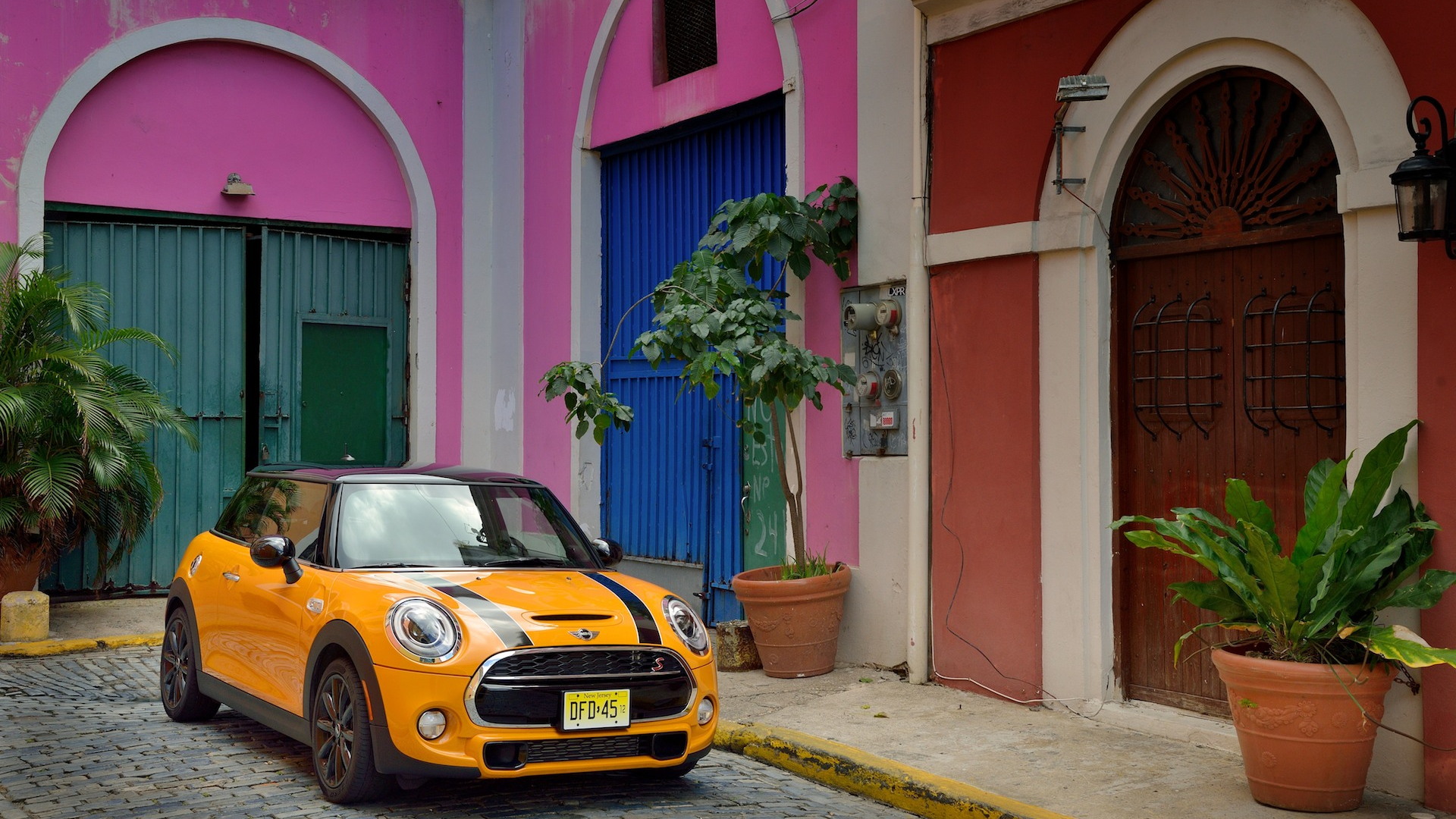 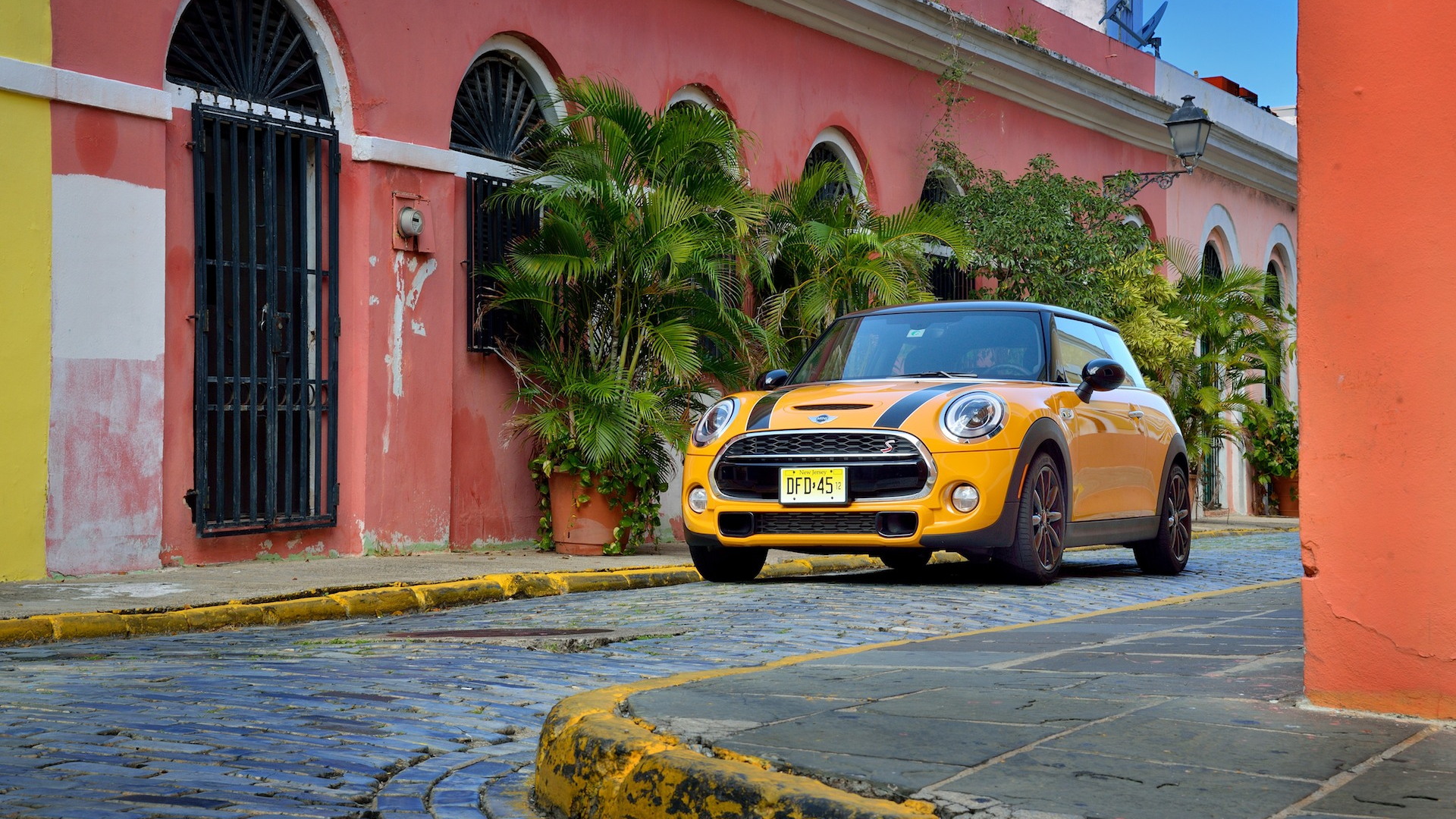 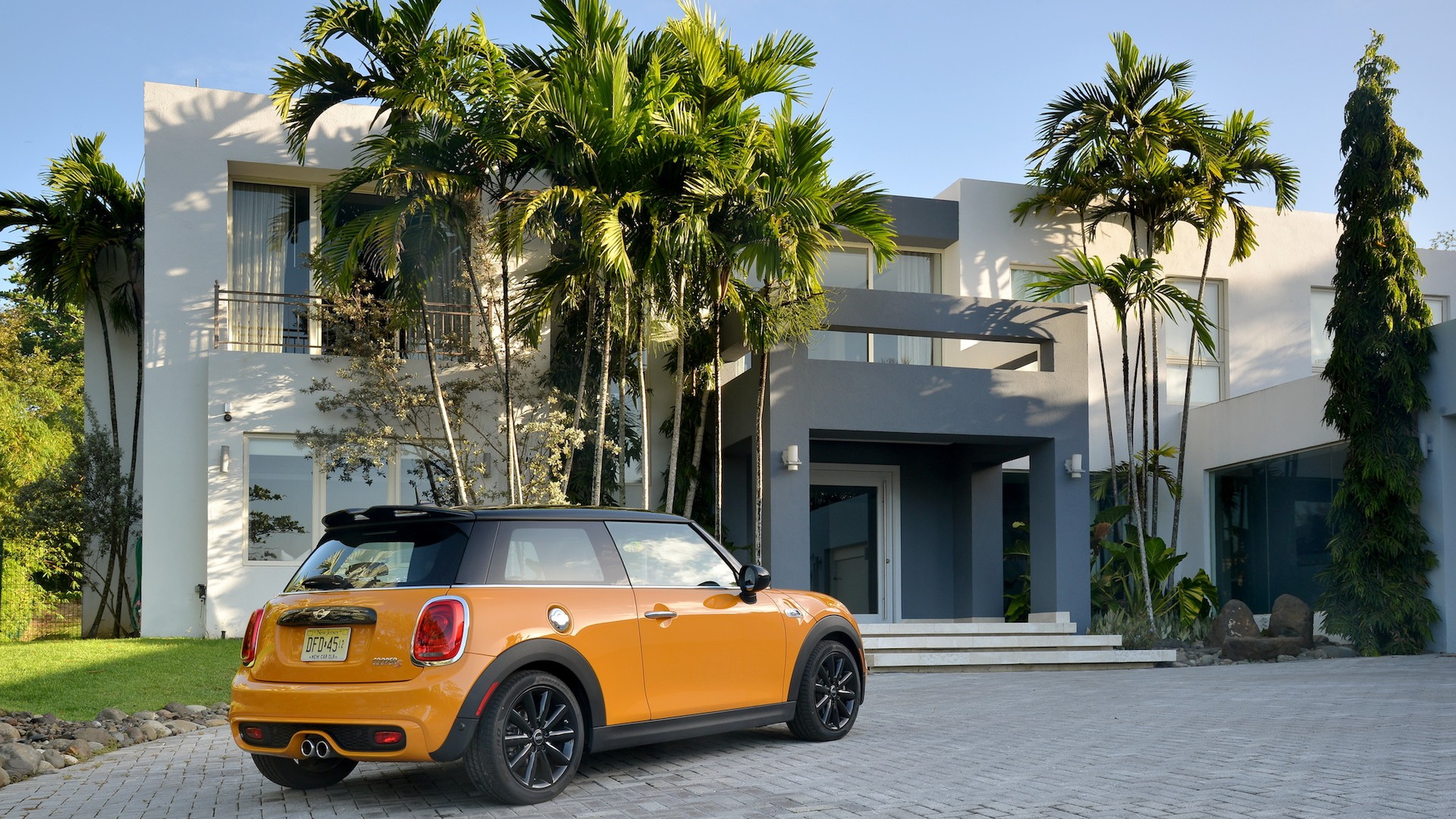 The essence of the classic Mini Cooper is easy to define: it's endearingly small.

What happens when you mess with the "small" part?

In more than a decade since Mini transformed into MINI, its makers have laid progressively larger patches on the road with models like the Clubman, the Paceman and the Countryman, even the second-generation Cooper hardtop. Nowadays, none are all that small, and frankly, not all of them are endearing.

MUST SEE: 1966 Ford Mustang ... Limousine? The Things You Find On eBay

You could worry that the gradual inflation and mission creep of the BMW-bred MINIs could threaten that quintessential Mini goodness. Kill off the core.

Or you could take a spin behind the wheel of the third-generation MINI Cooper. It's the biggest hardtop hatchback yet to wear the name. Yet with all the agita over its bigger waist size, it's still small enough--and it's still outsized in the endearing department, where it counts.

And it's still the MINI that suits us best.

The Cooper hardtop's as brilliant to drive as ever, or more so--if we can gauge that from a blaze around the palm-fronded, beach-framed roads of Puerto Rico, while the rest of the country got heartsick over an unending winter. (We're still waiting for The Weather Channel to start Wu-naming winter storms: "Tha Ol' Snowy Bastard.")

This third-generation MINI Cooper was revealed last year, and overlaps some of the current Cooper range for a year while it's hitting showrooms. The new hardtop is on sale now as a 2014 model; the Cooper Convertible, Cooper Clubman and Countryman are carryovers until at least the 2015 model year, with new versions (including a full five- or six-door Clubman) planned for upcoming model years. Eventually, all of them will ride on a new "UKL" architecture that will underpin the entire MINI lineup, as well as a few cars over at the BMW mothership.

The trick with this third Cooper evolution has been to manage the MINI's heritage style on an ever-larger canvas. It's bulkier, but the new Cooper hardtop still has the unmistakable cues, the pop-eye headlamps, the floating roofline, the plethora of custom trim options. All the extra size is contained in a silhouette that looks absolutely, instantly familiar, even though those headlights are higher, though the front end's considerably taller to meet European pedestrian regulations.

For a sense of scale, it helps to look back at the previous Cooper, and around the block to other subcompact hatchbacks. Sir Alec Issigonis might not consider the new MINI small, but it is, given its current context. At 151.1 inches long, 68 inches wide and 55.7 inches tall, it's some 4.5 inches longer, 1.7 inches wider and 0.3 inches taller than its predecessor, with a wheelbase 1.1 inches longer at 98.2 inches, and a track of 59.1 inches that's wider at the front by 1.7 inches and at the rear by 1.3 inches. A Kia Soul we passed on the outskirts of San Juan looked huge by comparison, at 163 inches long and 63 inches tall.

Even better, the new Cooper's human package remains as utterly useful as its upright shape implies. The driving position's nearly perfect, and the sport seats on both our test cars were very form-fitting, and highly adjustable. There's an obvious uptick in head room, too. It's also the first MINI Cooper back seat I've been able to sit in comfortably. An inch more knee room is nice, but it's the three extra inches of shoulder space that's more liberating.

Expanding inside also means more cargo space around the split-fold rear seat; storage is up 3 cubic feet to 8.7 cubic feet behind the rear seats, or 38 cubic feet in all behind the front seats, up from 24 cubic feet. MINI's fashioned in plenty of cubbies and bins, and fits an optional storage package in back that adds a tiered shelf, package nets, and seatback map pockets.

The biggest complement to the space is more attention paid to touch, feel, look, and sound. The new Cooper doesn't creak or lash out waves of road noise as it has in the past. The suspension's almost silent, and there's a perfectly appropriate level of engine noise piped into the cabin, depending on your choice of three-cylinder Cooper or four-cylinder Cooper S.

Which one would we choose?

Puerto Rico is far from the perfect place to test-drive a new car. The roads are unfamiliar, the switchbacks can be very tight, the highways are few and usually congested. On San Juan's patchwork of great and grim roads, the MINI planted itself more comfortably than ever.

Back to back with the two engine choices, it's clear the size of the new MINI Cooper doesn't matter as much as the leap in powertrains. Flip the red toggle switch to start it up--you don't have to use the key anymore--and either a charming, frugal three-cylinder or a strapping turbo four fires up.

Like the architecture itself, the MINI's engines are completely new, the first of a modular engine family fitted with direct injection, variable valve timing, turbocharged in both MINI iterations. The size matters less than the efficiency: the base car's new turbocharged three-cylinder now makes as much power as last year's base four-cylinder. With a six-speed manual and that turbocharged 1.5-liter three-cylinder engine, the base Cooper is rated at 124 horsepower and 162 pound-feet of torque (or 169 pound-feet with overboost function). MINI says the base Cooper will sprint to 60 mph in 7.4 seconds (7.3 with the $1,250 six-speed automatic) and reach a top speed of 130 mph.

There's the expected, slightly unusual exhaust sound, but with all the work on sound deadening and stiffening the Cooper's structure, it's almost a letdown that's it's not weirder-sounding, or slower. It just rolls past a little turbo lag into a fun, exploitable torque curve.

The 2014 Cooper S barely betters its outgoing performance numbers, in contrast. With the standard manual and its new turbocharged 2.0-liter four-cylinder, it's good for 189 horsepower and 206 pound-feet of torque (221 pound-feet with overboost). A six-speed automatic is available, same as the base car, but for $250 extra this version adds paddle shift control, as well as satellite-aided shifting with the optional navigation system. The Cooper S' 0-60 mph times drop slightly, to 6.4 seconds (6.3 with the auto), though its top speed rises to 146 mph.

Both Coopers have made enormous strides in fuel economy. The official EPA numbers aren't in, but combined numbers in the mid-30-mpg range are expected, with a 42-mpg highway rating for the base Cooper automatic and near 40 mpg highway for the Cooper S auto. The numbers come from standard stop-start that can abruptly jackrabbit the Cooper S back to life (it's a milder kick in the base Cooper) and from a switchable MINI Driving Modes system, that alters throttle, steering, even the exhaust sound to go from a "Mid" setup into a an economy-minded Green mode. It's accessible from a toggle at the base of the shifter--and lights up a green ring around the bezel of the big round screen plunked into the middle of the MINI's dash, where the speedometer used to live.

The toggle goes both ways. Switch in the other direction and it accesses Sport mode. The LED ring glows red, the throttle jumps a few hundred rpm higher, the steering stiffens, and the optional adaptive dampers take a firmer set. On the base car, there's still a strut setup, and a multi-link setup at the rear, but even that can be tweaked with a $500 sport package, as well as those $500 adaptive dampers. The standard wheels are 15s; the Cooper S gets 16s, and wheel sizes range up to 18 inches, but both the Cooper and Cooper S we drove were shod with 17-inch wheels and all-season tires.

In either case, the base Cooper felt like the better part of the bargain. The mix of very tight, low-speed corners, narrow roads and a few stretches of wide-open, unchallenging divided highways meant the turbo three-cylinder just made more sense in everything but flat-out acceleration runs. Both cars had great electric-power steering responses, properly weighted in Sport mode, even a little more relaxed than before. It was hard to get the base car to bobble, impossible in the Cooper S fitted with the adaptive shocks and sport transmission.

In both trims, the Cooper rode better than any MINI Cooper ever has. The gains in body structure and wheelbase, and right-sized tires, buzz down the old Hardtop's sharper burrs. The body may no longer be so ruthlessly efficient, but the powertrains are, without losing any of the endearingly flat, sticky road feel in the process.

Navigating in and around San Juan came a little more easily in this third-gen MINI, since the cockpit's been scraped clean of the heritage cues that don't work in real life--the center-mounted speedometer, specifically. The new MINI has tach and speedo mounted on top of the steering column. Can we get a British amen? ("Well done"?) The big round screen at the center of the dash is now devoted to ancillary displays for audio and phone, navigation if it's ordered--and MINI Connected apps, on a screen up to 8.8. inches wide, governed by an iDrive-style controller on the center console. Like many BMWs it now also has a touchpad surface that accepts fingertip-generated characters for address entry.

In tandem with the standard Bluetooth and USB interfaces, the MINI Connected interface gives drivers exactly what they'll need to add an information-dense layer to driving. With it, you can couple your smartphone to the car and access MINI's own social-media apps, along with streaming audio and networking apps from Twitter, to Pandora, to Facebook. As with other in-car versions of these, the MINI versions are better served by a five-minute stop for coffee and email.

Despite its subcompact status, the new Cooper offers plenty of premium touches including LED headlights, a leather interior, and a new, icy-cool white-trimmed interior, along with the huge palette of paint, trim, and decals that are a MINI hallmark. Keyless entry permits pushbutton start for the first time, too, and the new Cooper also offers a head-up display like the one in the 2014 Mazda 3 (a Harman setup) as well as a backup camera, collision and pedestrian warning systems, a parking assistant and even a speed limit information system.

Priced from $20,745 including a $795 shipping charge, the base MINI Cooper gets a strong nod this time. It feels more substantial despite MINI lopping off a cylinder. It's now a real thing, not just a step on the upgrade launching pad. We've configured a hardtop in the $27,000 range that has almost everything we'd expect or want, including the sport package, adaptive dampers, and the classic white roof.

The sportier Cooper S? It'll only set you back $24,395 in base trim but it's super easy to blow past $30,000. Maybe we'll feel differently once we blast around our favorite home roads with the Cooper S, but it's hard to want to spend more for less of an advantage.

Bigger isn't always better--but it's not always worse, either. We'll know MINI's gone astray when they start talking about building a "city car." That time is not now, and really doesn't seem any closer, either.