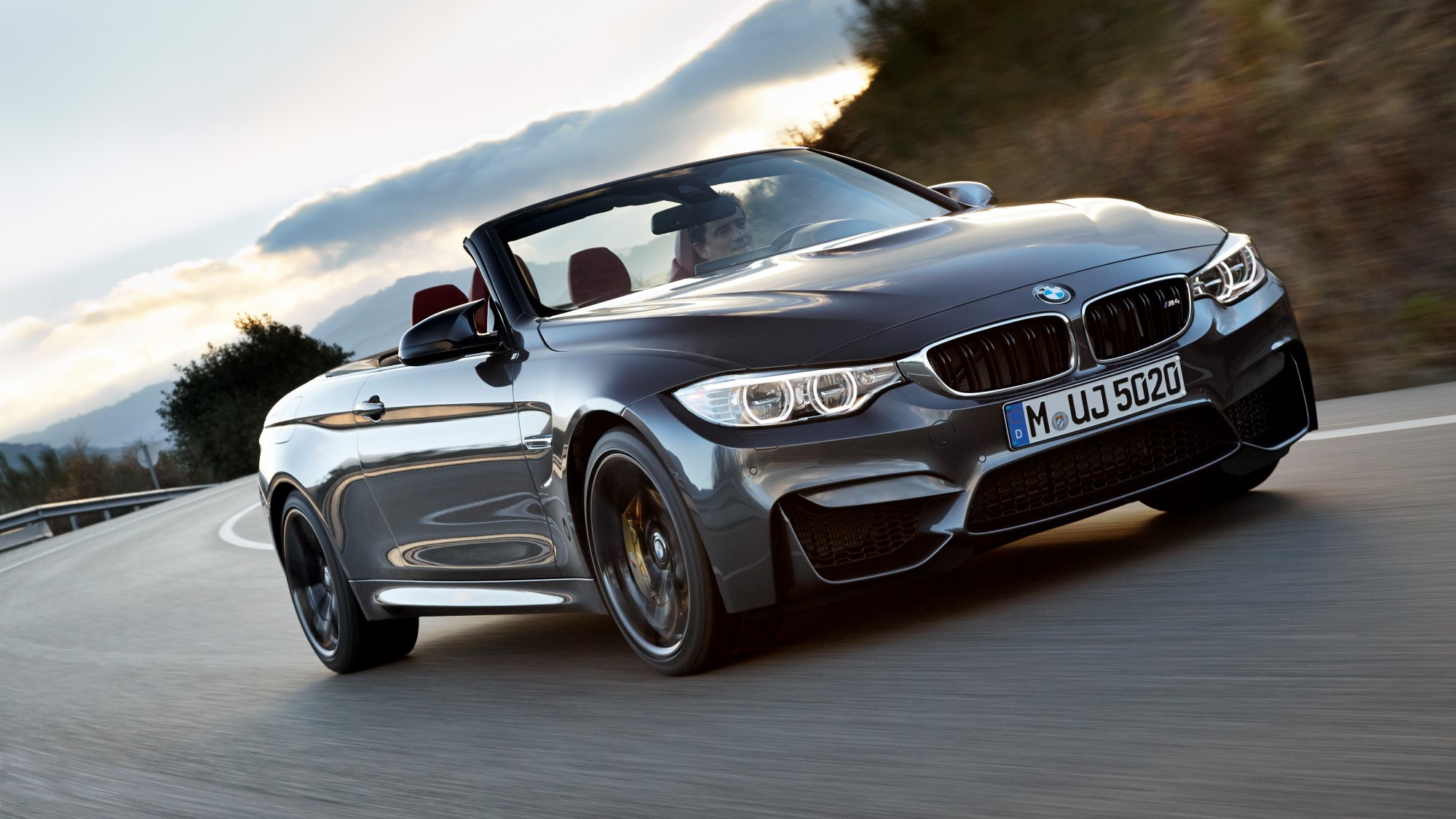 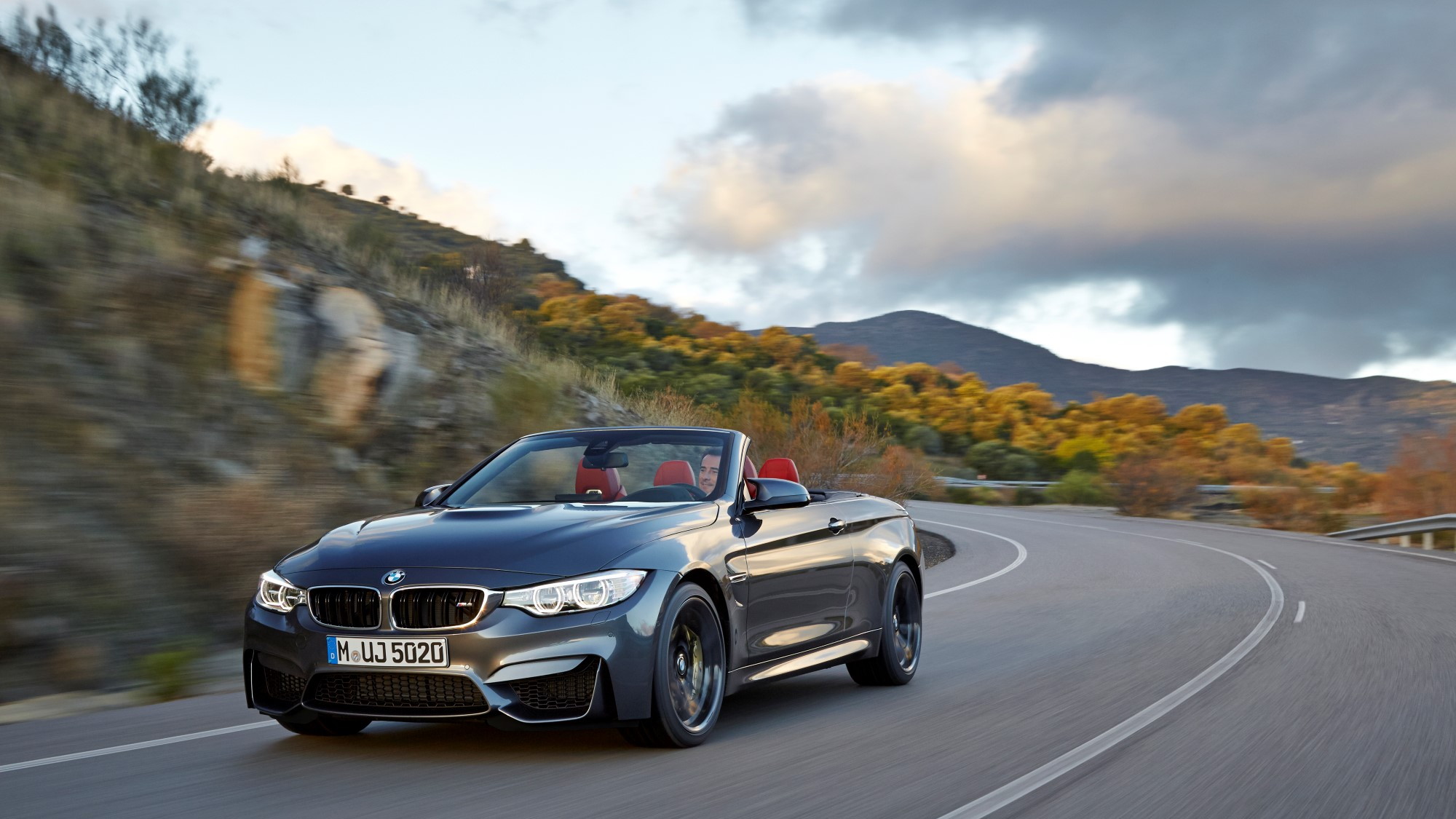 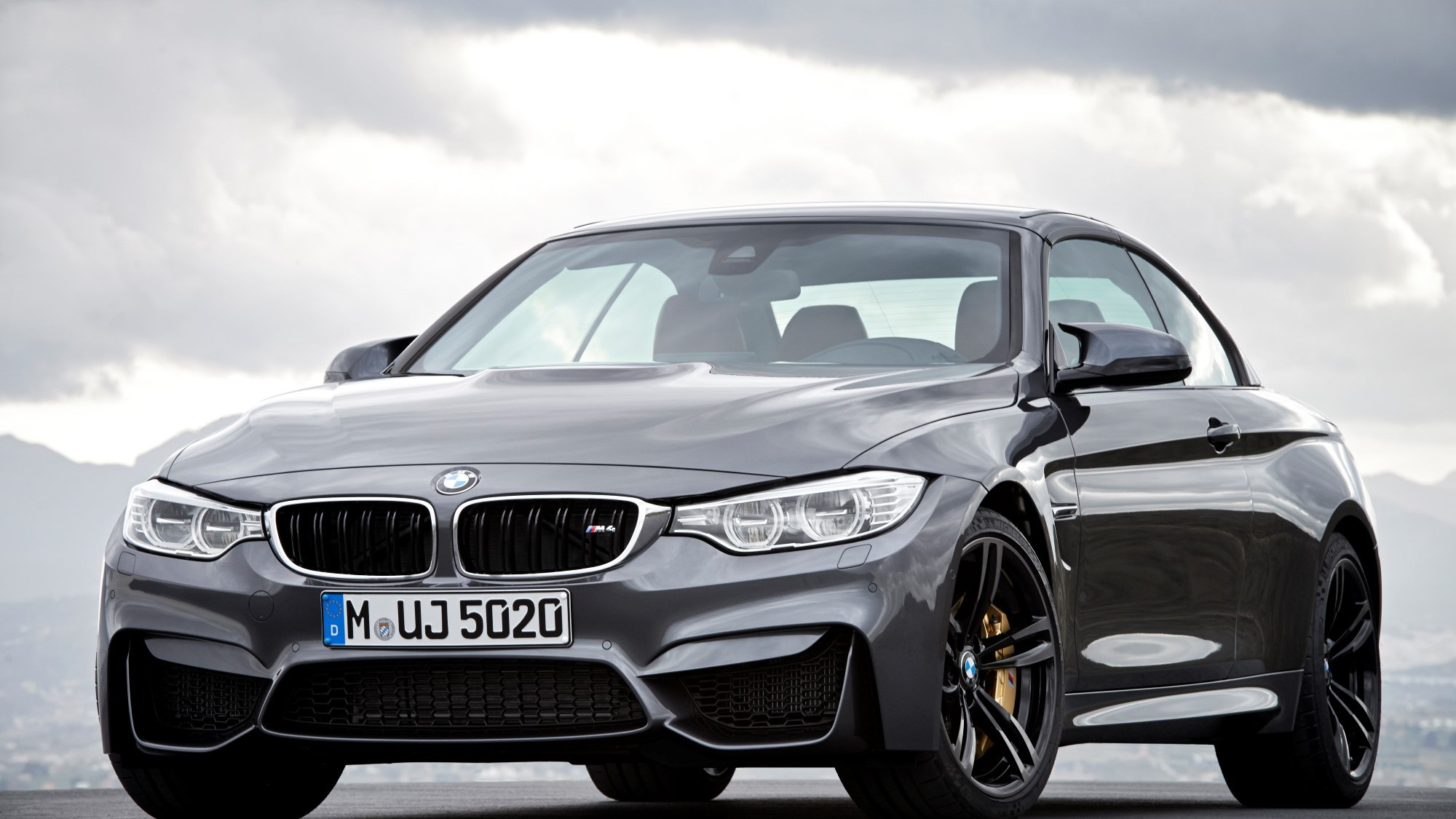 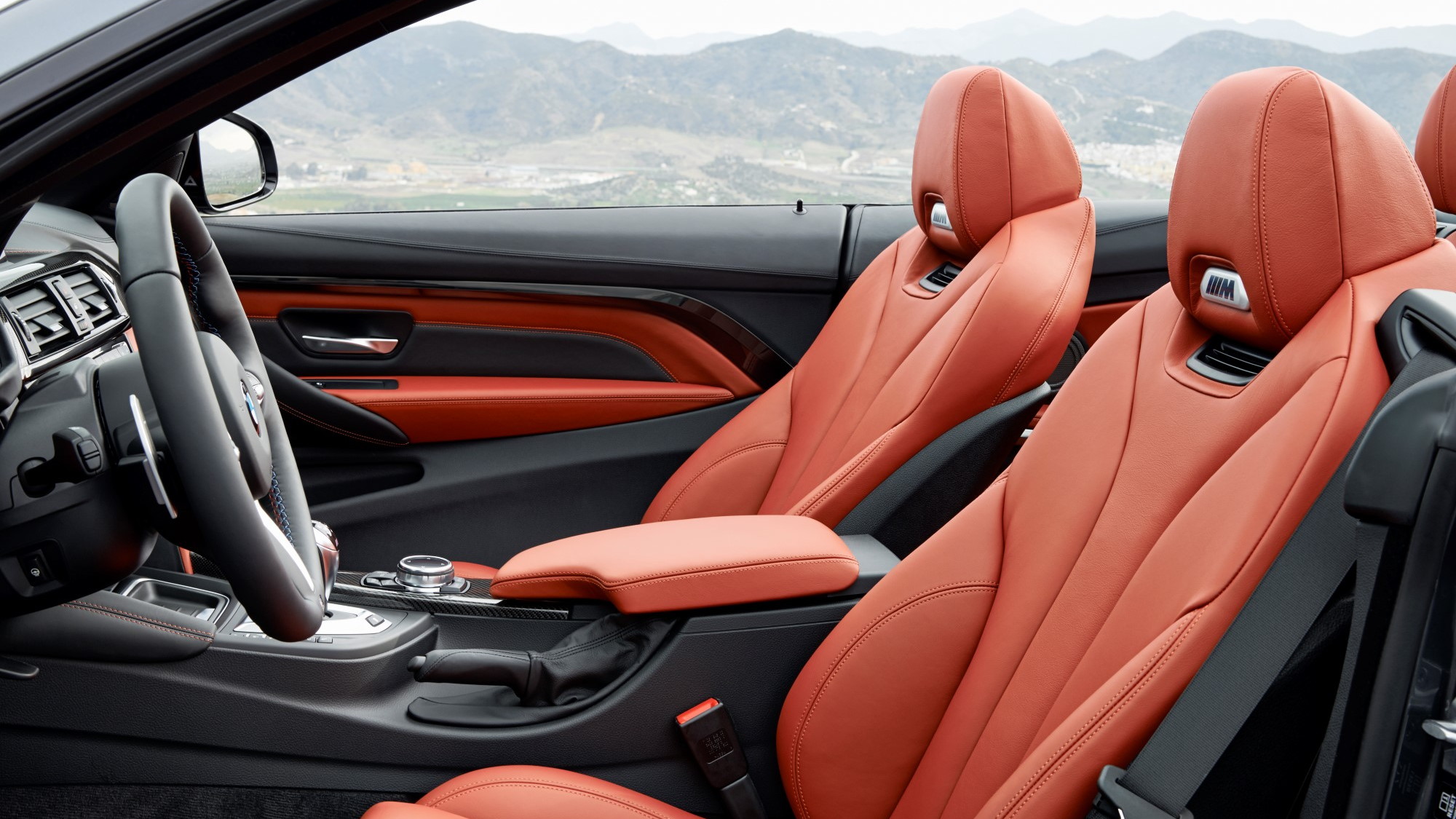 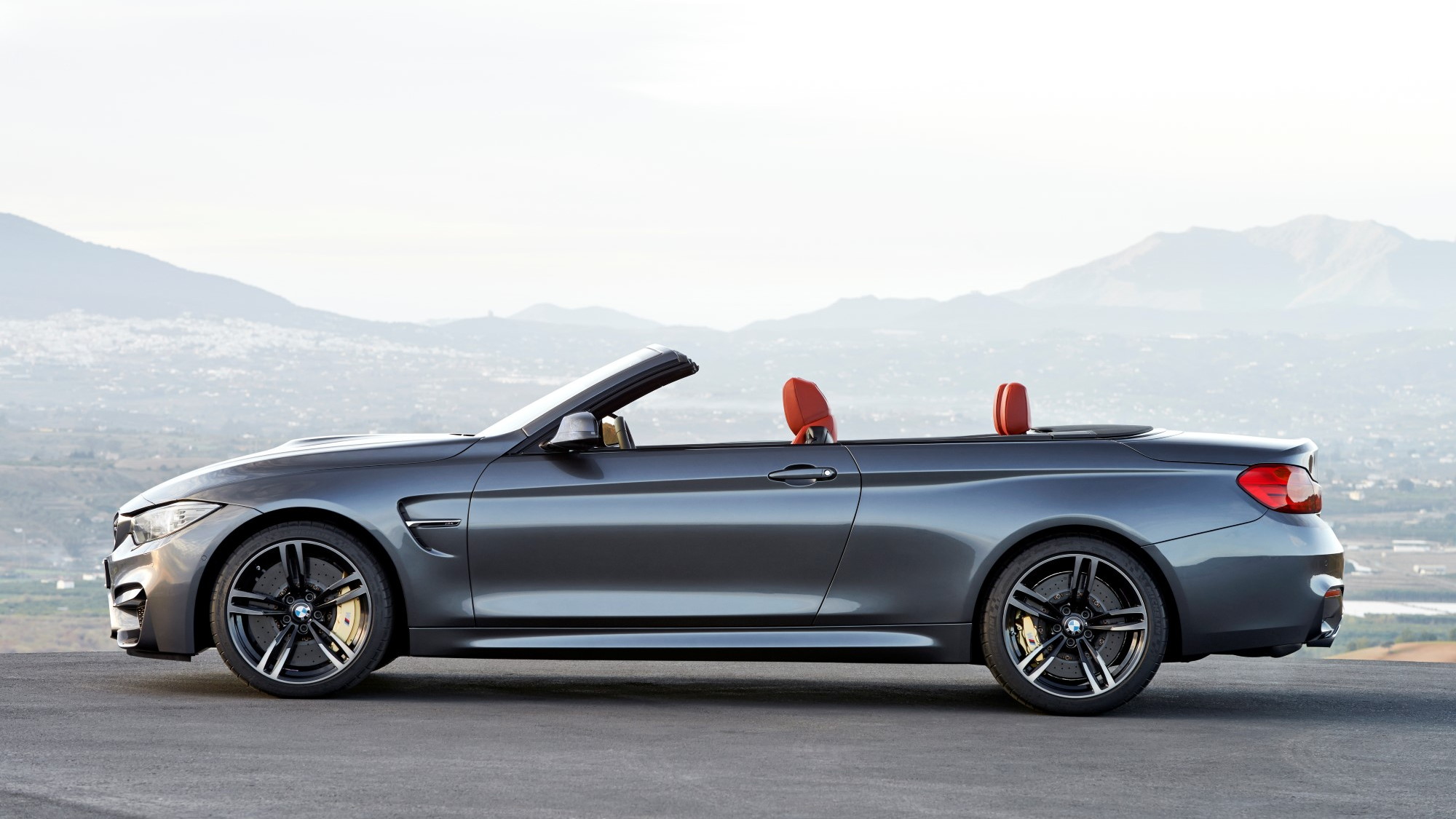 34
photos
While the 2015 BMW M3 sedan and M4 coupe are already familiar to enthusiasts around the world, the drop-top M4 Convertible has remained under wraps--mostly. At the 2014 New York Auto Show, it will make its world debut.

Aside from its retractable hard top, the 2015 M4 Convertible differs very little from its M4 coupe counterpart. Under the hood lies the same twin-turbocharged 3.0-liter in-line six-cylinder engine, rated at 425 horsepower and 406 pound-feet of torque. The same choice of six-speed manual or seven-speed M-DCT dual-clutch transmissions can be had. It still drives the rear wheels only. Features, options, and equipment all mirror the coupe, too, from the optional Adaptive M suspension to the available head-up display.

But that retractable hard top is a very handy thing. A three-piece assembly folds into the trunk under electric power in just 20 seconds, at speeds up to 11 mph. Design improvements further reduce cabin noise over its predecessor by 2 dB, and a new windblock (standard equipment in the U.S.) is lighter, smaller, and more effective, as well as easier to deploy, according to BMW.

With the top up, trunk space is about 13 cubic feet; you'll sacrifice almost half of that to put the top down, with 7.8 cubic feet remaining. That smaller space is made more accessible thanks to a wider trunk access port, a load-through feature that lets longer items protrude into the rear seat area, and an electro-hydraulic loading assistance system that improves access to the remaining trunk space when the top is down.

The convenience of a coupe that transforms into a roadster comes with a price, however: weight. The penalty paid is about 90 pounds less than in the previous E90-series M3 Convertible, but at a claimed curb weight of 4,055 pounds, the 2015 BMW M4 Convertible takes a 500-pound hit over the coupe.

That's right, the M4 Coupe's curb weight is 3,530 pounds with the six-speed manual transmission, or 3,585 with the seven-speed M-DCT unit. That means the M4 Coupe is as much as 525 pounds heavier than its fixed-roof doppelganger--despite BMW's efforts to limit weight as much as possible. Lightweight materials used in the M4 Convertible include many of the same features found in the coupe, of course, including aluminum front fenders and hood; a CFRP drive shaft; and a CFRP strut brace.

Even with the added weight, the M4 Convertible should prove to be a quick, fun-to-drive car. You can put it to the test starting in the summer of 2014, when the first cars will begin delivery to U.S. showrooms. Pricing for the M4 coupe was recently confirmed to start from $65,125; for the M4 Convertible you'll need to pay at least $73,425.