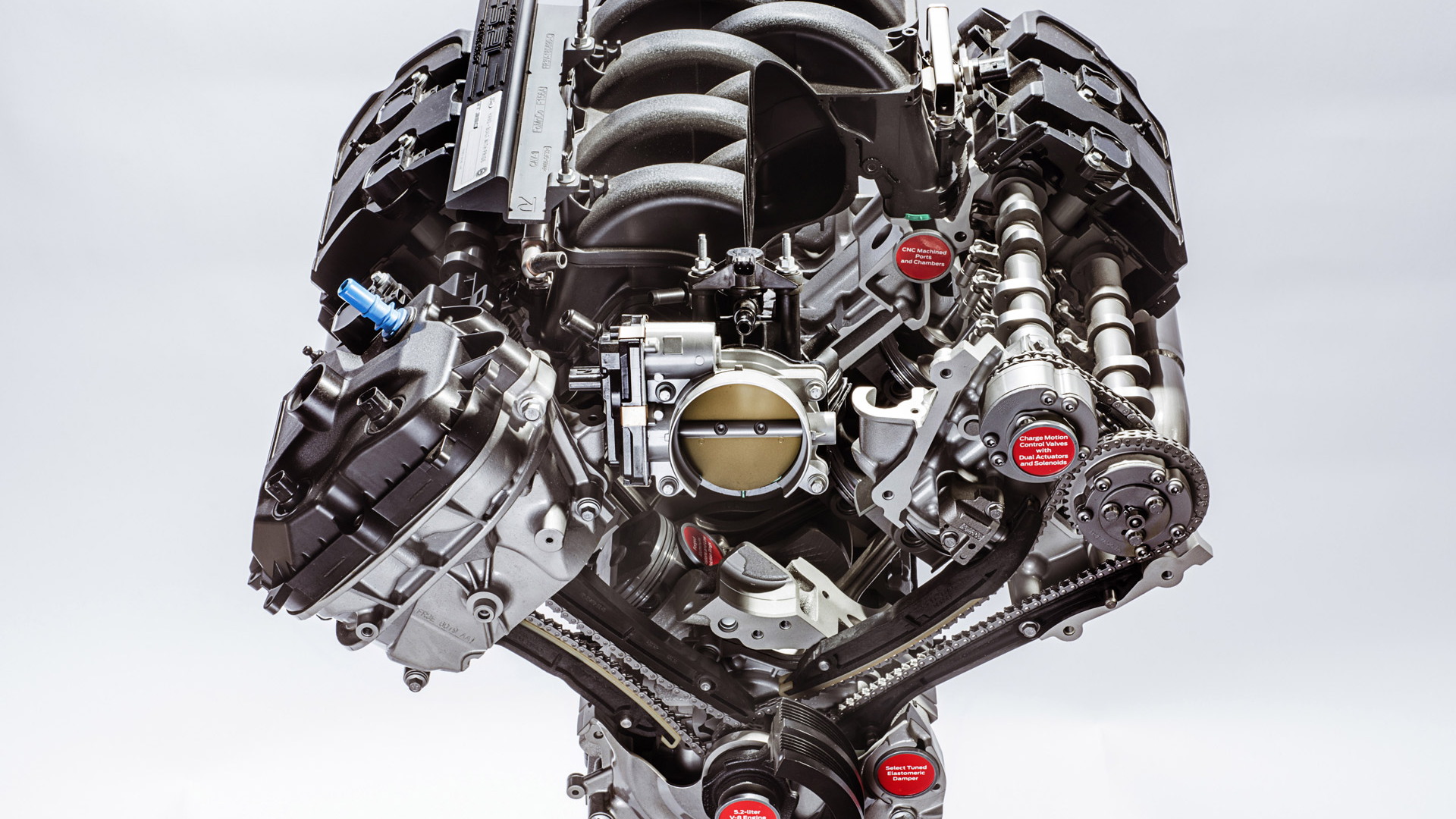 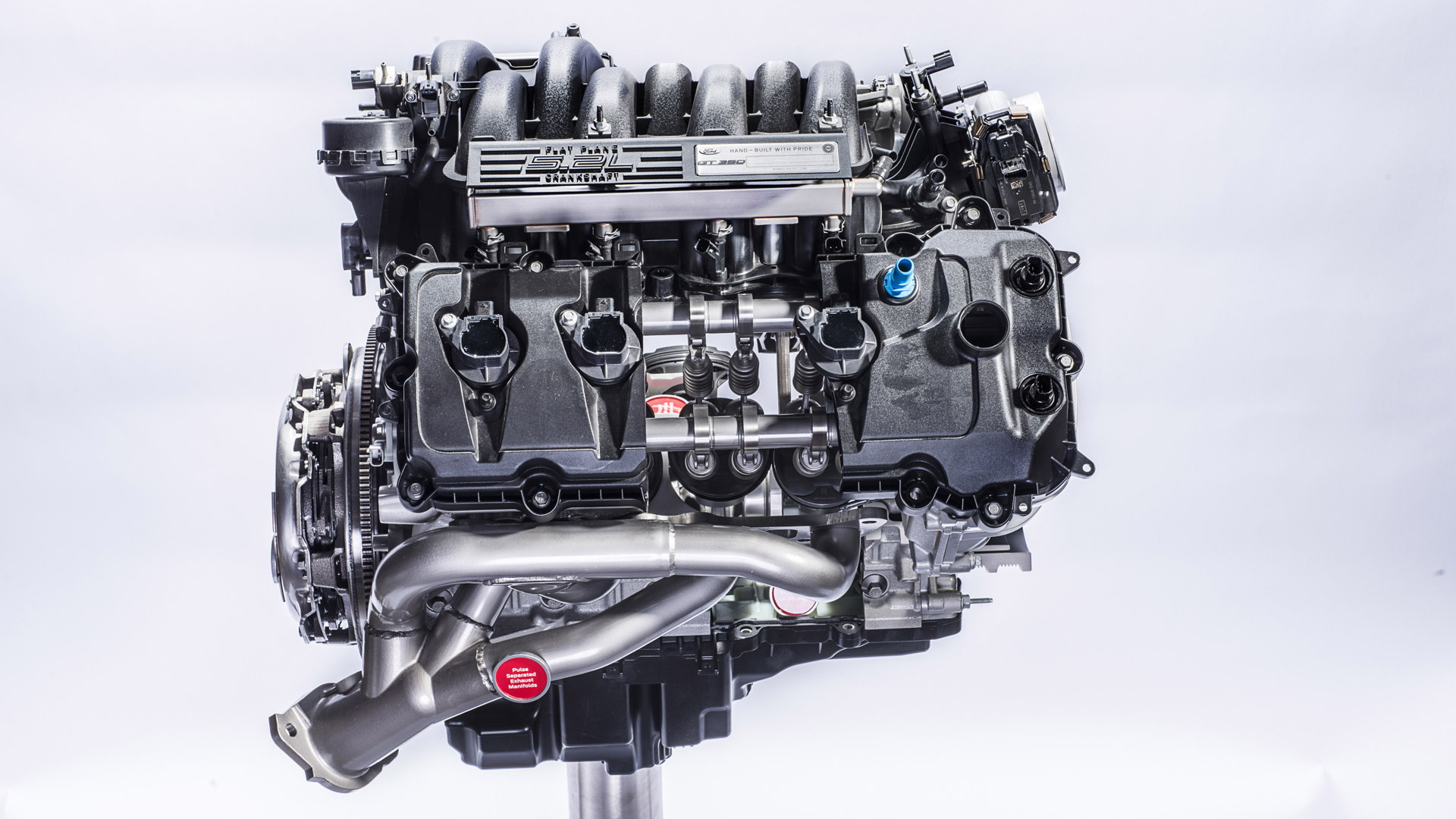 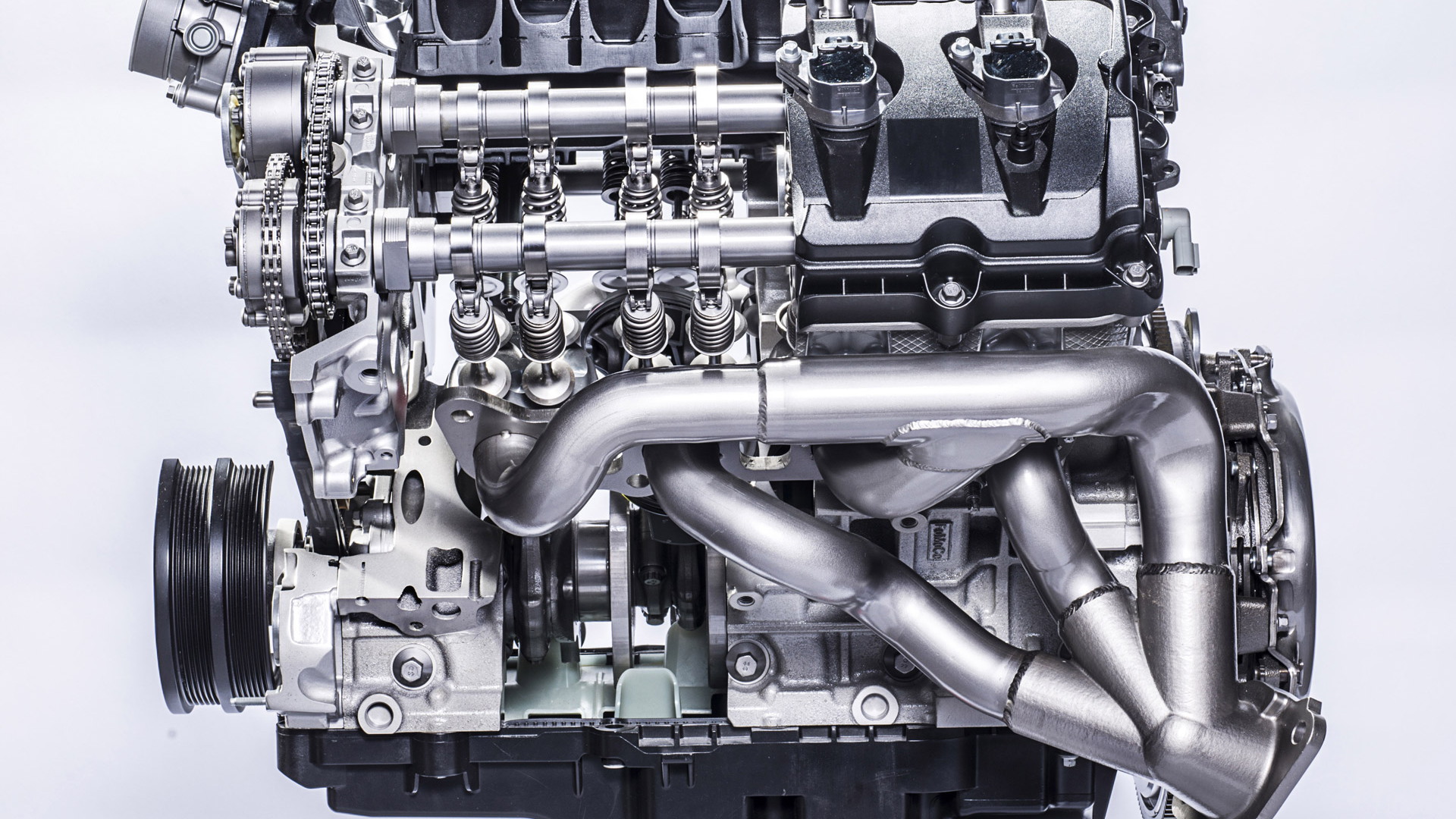 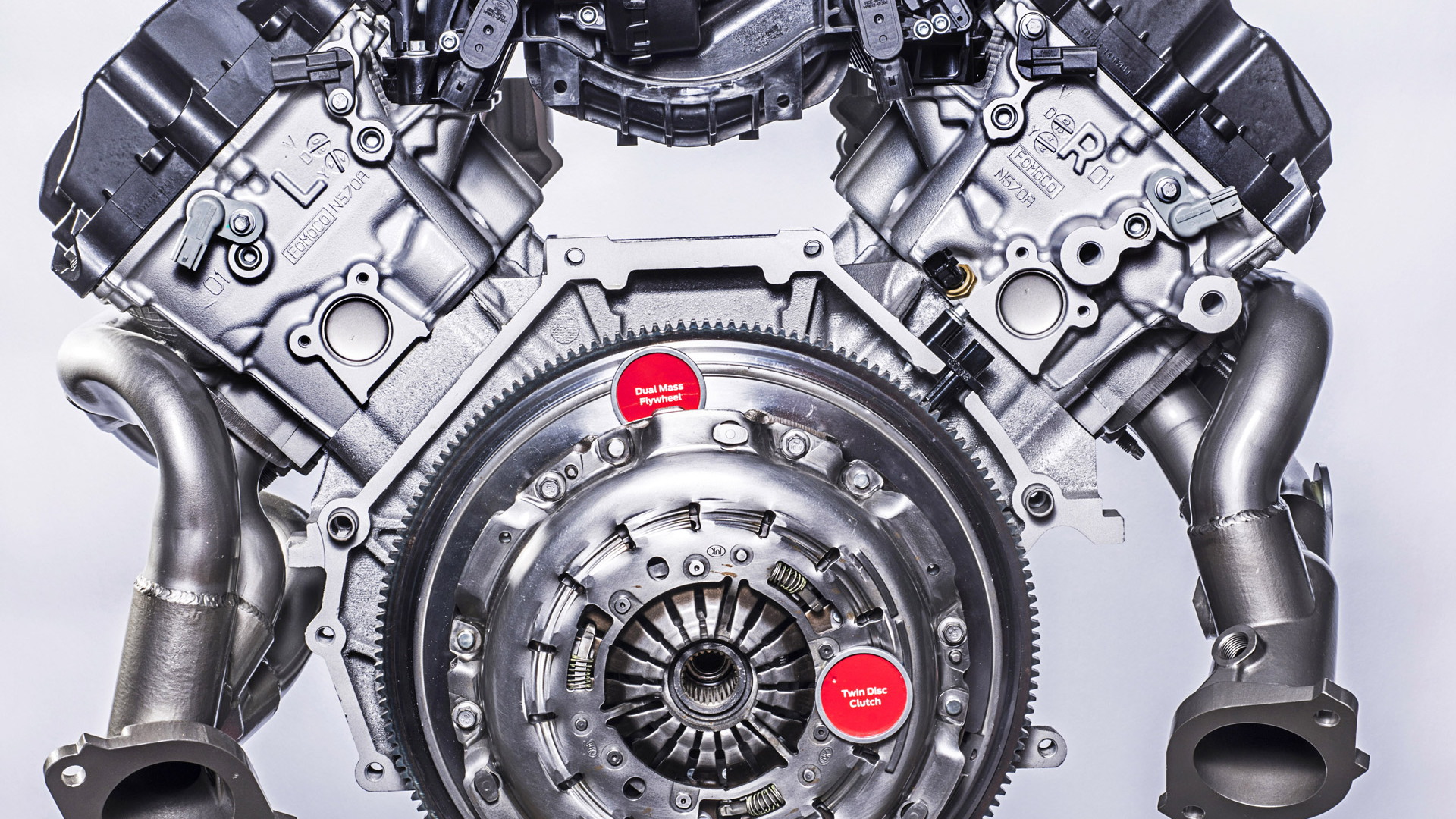 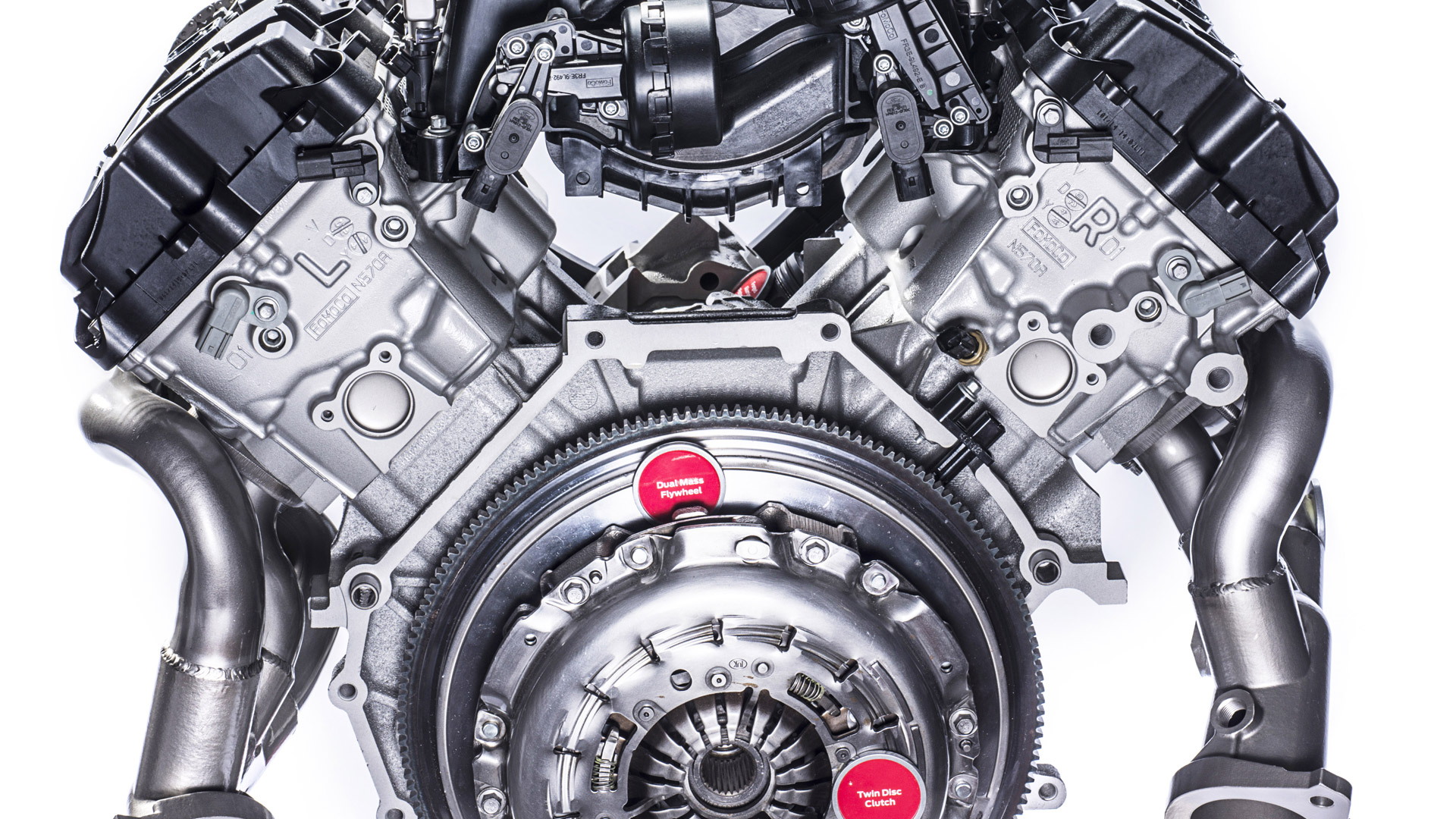 The Ford Motor Company [NYSE:F] has already revealed many of the secrets of the new Mustang Shelby GT350 but arguably the most crucial factor, the output of its new 5.2-liter V-8 engine, has remained a mystery… until now. Yes, we can finally confirm that the bespoke, flat-plane crankshaft engine musters up a peak 526 horsepower at 7,500 rpm and peak torque of 429 pound-feet at 4,750 rpm.

The engine happily revs to a screaming 8,250 rpm redline, and more importantly it produces 90 percent of peak torque from roughly 3,450-7,000 rpm, with a track-friendly spread of nearly 3,000 rpm between the torque and horsepower peaks. Also, the engine is producing roughly 101 horsepower per liter, making the new Mustang Shelby GT350, along with the more hardcore Mustang Shelby GT350R, both the most power-dense and the most powerful naturally aspirated road-going cars in Ford history.

According to the automaker, the design of the engine was optimized using computer-aided engineering and fully digital performance simulations: Millions of intake, cam and exhaust configurations were simulated before arriving at the optimal combination. The end result is an engine that met all of the performance targets engineers had set for the new GT350 powerplant: high horsepower, broad torque curve, aggressive throttle response and light weight.

One special element is the aforementioned flat-plane crank. Flat-plane V-8s are common in motorsport but they’re rarely used in production cars (Ferraris are an exception) because most flat-plane engine designs tend to produce lower torque levels down in the rev range. They also tend to be noisier and a bit rough compared to rival cross-plane designs. Barring the noise issue, Ferrari has shown that the shortcomings of the flat-plane design can be overcome—any doubters should take a spin in the 458 Italia, and it looks like Ford has too.

Beyond a change in the characteristic V-8 burble, the flat-plane crankshaft helps improve cylinder exhaust-pulse separation by allowing a firing order that alternates ignition events between the V-8’s two cylinder banks. This helps improve engine breathing, particularly at the top end, and subsequently allows the unit to make more power.

Other aspects of the engine include a slightly oversquare bore and stroke of 94x93 millimeters, a 12.0:1 compression ratio, a massive, fast-acting 87-millimeter throttle body, and lightweight aluminum construction with Ford’s patented plasma transferred wire arc cylinder-liner technology for ultra-low friction. Further weight savings come from the “gun-drilled” crank and a composite oil pan.

In the GT350 and GT350R, the engine will be mated exclusively with a six-speed manual transmission, in this case a Tremec TR-3160. It features a die-cast aluminum case and clutch housing to help save weight and has some specific tweaks for application in the new track-focused Fords.

Both cars are actually being introduced this fall as 2015 models, though just 137 of these '15 models will be built to honor the original 1965 Shelby GT350 built by Shelby American. Once this initial batch of cars is built, Ford will switch over to 2016 models that will be built and sold in higher volumes. Pricing hasn’t been confirmed but the GT350 is expected to start at just $49,995, including Ford’s standard $825 destination charge as well as a $1,300 gas guzzler tax. The GT350R should start at $63,495, with the same destination and gas charges.

Chevy, the ball is now firmly in your court.